The Search for the Next Trek Gravity Girl 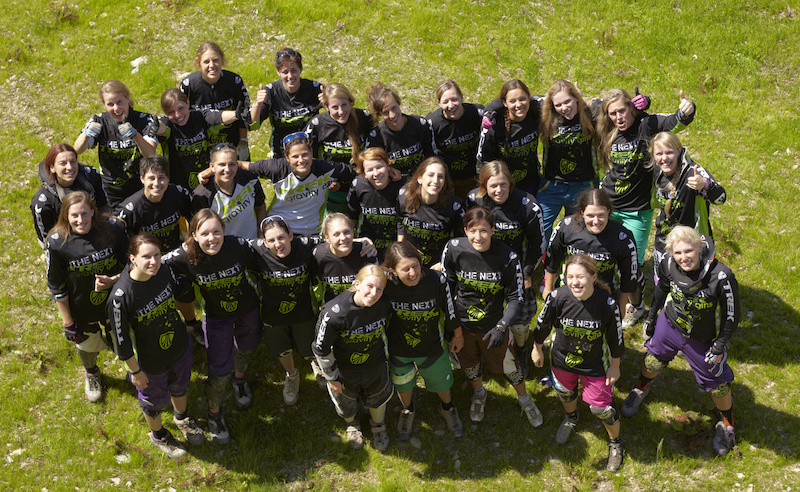 After spending the last few years as a team of four, 2012 ended up a little differently for the Trek Gravity Girls. Jess Stone got the chance to step up to the next level in her racing career and ride for the Unior Tool Team. She's still on Trek, but now has complete race support at the World Cups. Another former Gravity Girl, Solveig, has became a mum and started her own mountain bike school, ridingstyle, with her boyfriend

The easiest way to fill the empty spots would have been to add an already known rider to the team, but Steffi and Katja came up with another idea. Why not give unknown female riders with great skills the chance to win a spot on the team? The idea was born to create a contest in order to find the perfect teammate for Steffi and Katja.

Since the Trek Gravity Girls are based in the German speaking countries, 30 girls from Germany, Austria and Switzerland were selected from all of the applications received and were invited to the first event, the Dakine Freeride Festival in Saalbach, Austria. Over three days the girls had to do different challenges on their bikes while Steffi and Katja got the chance to see them ride and rate their riding skills and overall performance. In the end, a hard decision had to be made, and 10 girls were selected to advance into the next round. 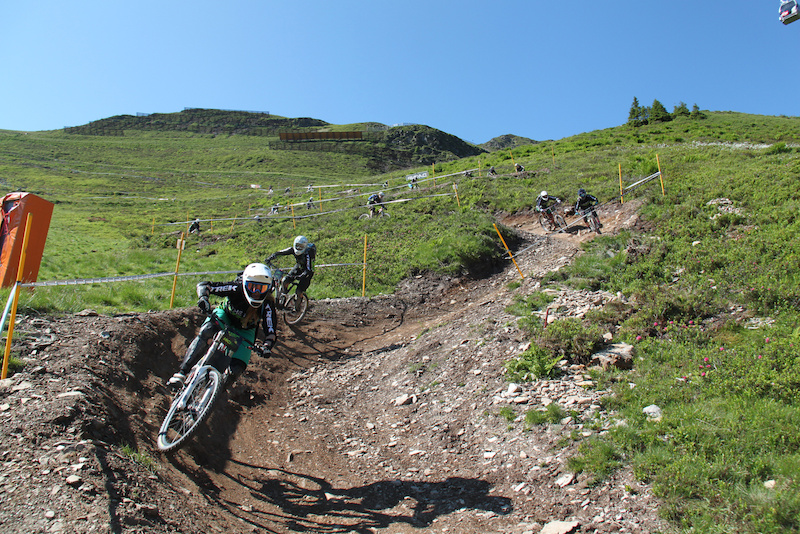 It was amazing to see so many girls having fun on their bikes and shredding hard. The highlight of round one was a helicopter shoot on the Hacklberg Trail. A big thanks to Saalbach and Bascht Hasenauer for making this possible. 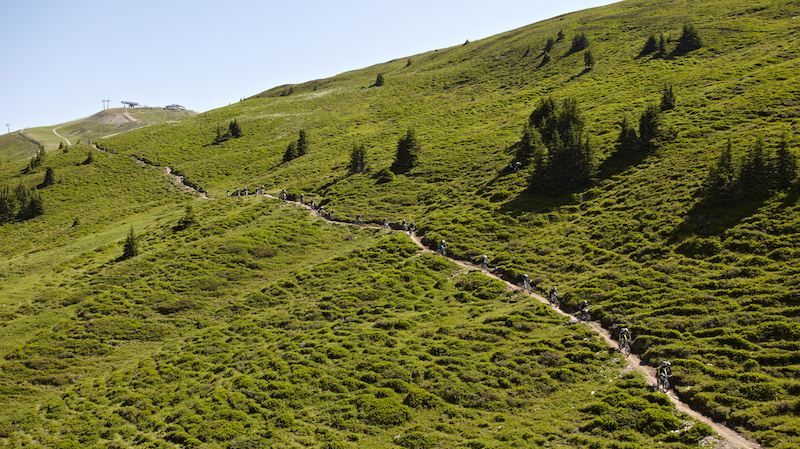 Katja and Steffi leading the girls on Hacklbergtrail. 30+ girls in a line. Longest girl train ever? 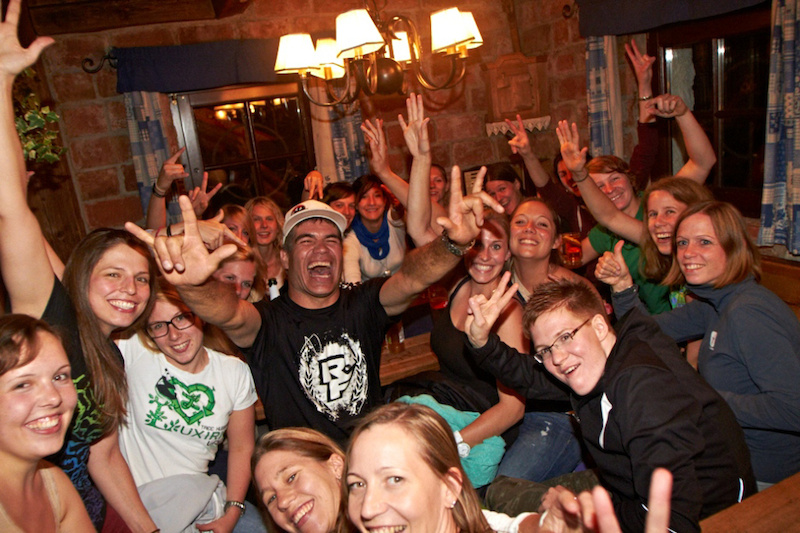 Goasstall Hinterglemm - looks like Brett Tippie is having fun.

The next stop was Flims/Laax in Switzerland for the ride days. Two days packed with alpine trail riding, skills sessions, a foam pit and shredding the Runca Trail in Flims. Unfortunately, the weather gods were not on our side. We got a lot of rain, but that didn't stop the girls from having fun riding their bikes outside. In the end, Steffi and Katja once again had to decide which five girls got into the next round at the Trek Bike Attack Race in Lenzerheide / Switzerland.

In August the last five girls, Yvonne, Michèle, Steffi, Kathi and Gloria, were invited to Lenzerheide in Switzerland. The girls spent four days riding and racing around the Trek Bike Attack with Katja, getting some final tips from one of the fastest long distance downhill racers in the world. Once again, it was a hard decision for Katja to nominate the final three girls for the last round in Brixen, Italy, in September.

Meeting René Wildhaber, getting tips, riding together. Seems like a good time for the girls. 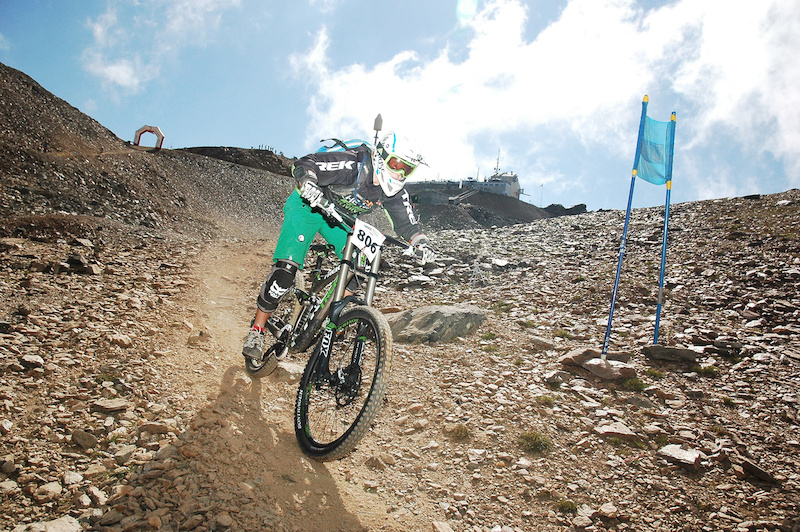 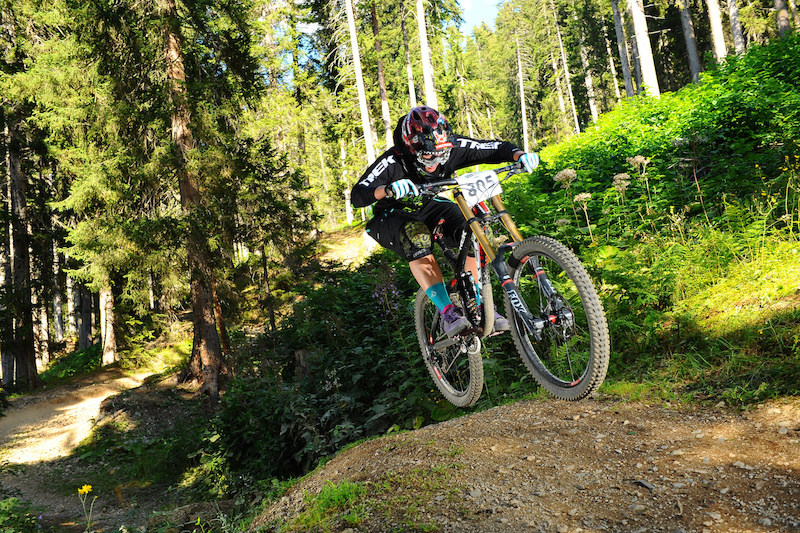 Air time for Kathi during the quali run. 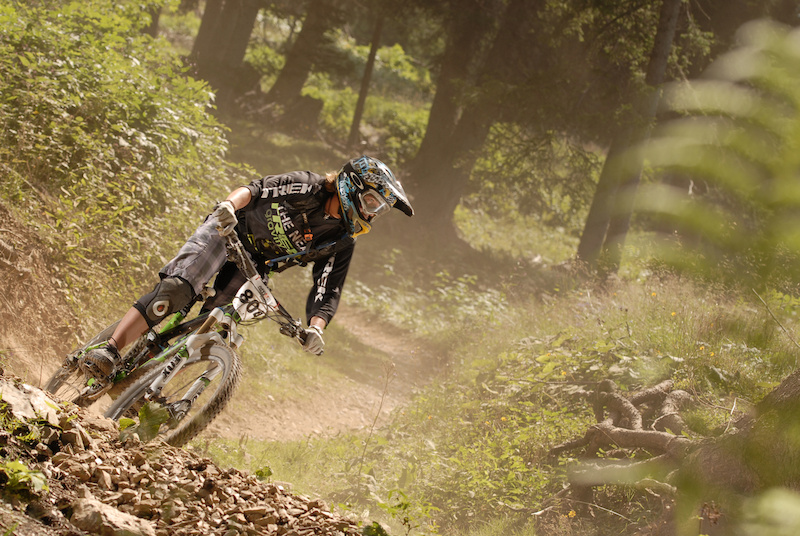 Steffi during her quali run. 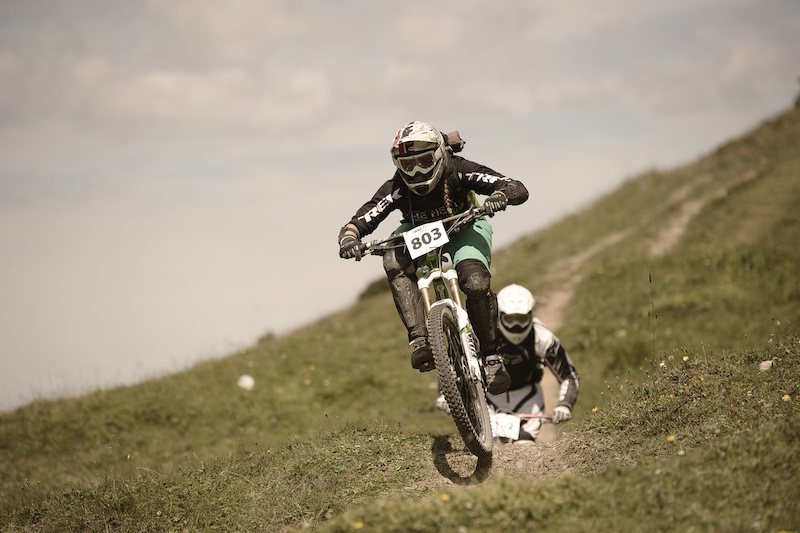 The final decision was made in Brixen. After a long discussion, Steffi and Katja were happy to announce the addition of two new girls to their team, so there would once again be four Trek Gravity Girls. The lineup for the next season will be Steffi Marth, Katja Rupf, Michèle Quint and Kathi Kypers. 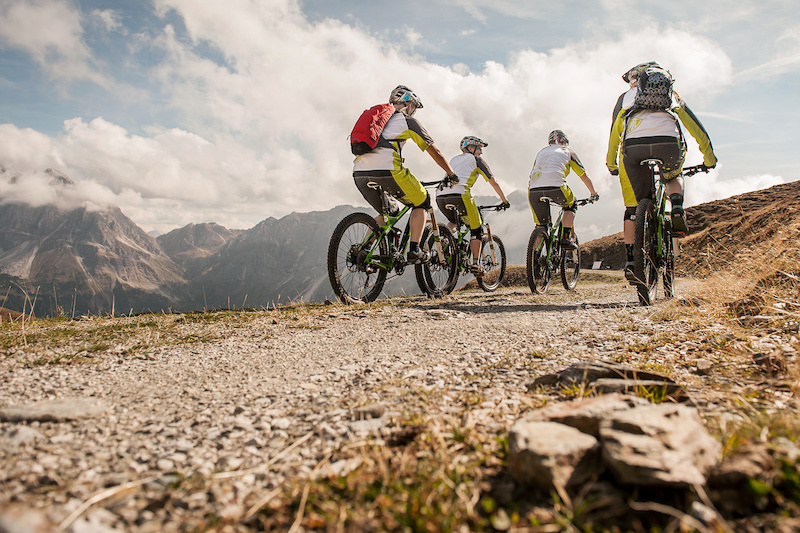 Finally, a big thanks goes out to all our sponsors who made this possible. Thanks to Trek Bicycle, Bontrager, Saalbach Hinteglemm/Young Generations Resort, Flims Laax / Signina Hotel; Trek Bike Attack, Bikehotel Goldene Krone Brixen. And most of all, to all the, girls we were lucky enough to meet and ride with throughout this search.

You can follow us through the upcoming season at:
http://www.facebook.com/TrekGravityGirls

kerberos (Jan 23, 2013 at 4:49)
On a serious note: There were voices saying there was already too much show and superficiality in the process, and that riding skills and team compatibilty were not top priority. Of course, the organisers reject this. True or not, making this a TV show it would be hard not to emphasize the wrong aspects.

wonkle (Jan 23, 2013 at 5:16)
If there was talk sometimes it could have come from the rejected members as there always will be excuses from one or two about why they got unfairly kicked out

Ehlectric (Jan 23, 2013 at 11:05)
I agree with Kerberos. They would have to film it as a web series. If they tried to air it, producers would want way tooooo much drama, especially cause they're girls, and it would just ruin it. So I think as a specialized web series it would be fantastic.

bretttippie Plus (Jan 23, 2013 at 1:51)
Congrats to the new Trek Gravity girls!! What a great time meeting all the ladies, joking around and dancing that night in Saalbach! Cool to see so many girls ripping on the mountain bikes these days!! Give'er ladies!!

Did you, you know, Insert?

WAKIdesigns (Jan 23, 2013 at 4:07)
That group photo on singletrack... My vote for Picture of the Year 2013 - That should be front page of some magazine with subtitle: Mountain Biking is Awesome.

Great stuff, always great to see Brett Tippie! More girls in MTB please, it needs to be more feminine. Too many dicks if you know what I mean...

When does Tippie not look like he's having fun?!

brownierice (Jan 23, 2013 at 23:46)
Dont really know how to express this but sometime I feel terribly alone. I see the trek gravity girls who look as if they could be my sibilings. I'm one of the few girls who rides in my town and among them even ride downhill and enjoy racing. I have a bachelors degree and still work for my shop yet cannot afford bike parts. I should probably be happy for my degree but after all the work I feel like all I really did was pay the school to work. Work meaning getting good grades and helping out with research leaving me with debt. I cant find a job with my degree to make things better. I don't know. I guess what I'm saying is that I envy their environment and feel I would excel but have no path of getting there. Especially now that I have loans to pay and still just work at a bike shop.

xphillips (Jan 24, 2013 at 16:07)
Great article and lots of great photos. There are so many great girl riders out there to be able to pull 30 together for this tryout from a small area means there is tons more good material out there for stories and photos. I hope to see more girl-rider articles on PinkBike.

casums (Jan 23, 2013 at 1:14)
girls are lucky! they can get sponsored and ride dream bikes, there's just less competition. Go out and ride ladies

dytrdr6 (Jan 23, 2013 at 6:00)
I think that is a rather rude thing to say. I doubt you can keep up with some of these girls, so to downplay their success by saying that they have less competition is bit of a douche move. keep up the good work ladies and this will really help to grow the sport overall.

querhoch (Jan 23, 2013 at 8:39)
its all relative though. the level of riding in the female categories is on a par, like for like, with the men so the competition is just as stiff.

drjohn (Jan 23, 2013 at 14:09)
I wonder how many friendrequests were made after posting this article? Not to mention the time stalking these ladies...

goal is to boost her confidence.