Apr 25, 2011 at 16:06
by Alasdair MacLennan
Tweet
The NorthernDownhill series run by Carl Davison in the north of England may not be the biggest series in the UK, but it has fast earned a reputation for using challenging courses as well as a loyal group of racers who attend them. 2011 kicked off this past weekend on the steep and technical track of Alwinton, not far from Rothbury and several other venues used by the series. Set four miles up a dirt road in an SSSI (Site of Special Scientific Interest) you would almost be forgiven for thinking you had been transported to a mini-alpine landscape, with steep hillsides and open pine forests. 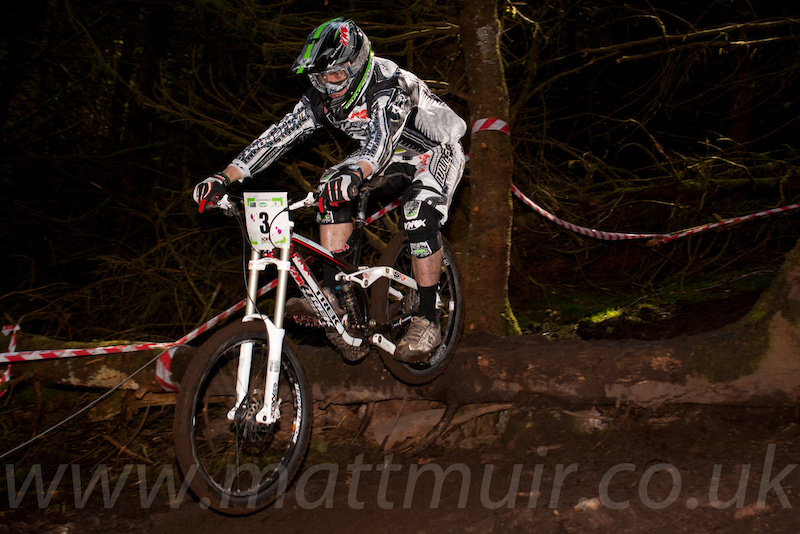 Liam Little
The last time Alwinton was used there was a significant drop in numbers between Saturday practice and Sunday racing when many riders struggled with the nature of the track and the wet, typically British, conditions. This year has seen a new track built which utilises the same lower sections but with the ultra steep chutes of the original replaced by sections more rideable for a greater number of riders although still a serious challenge. 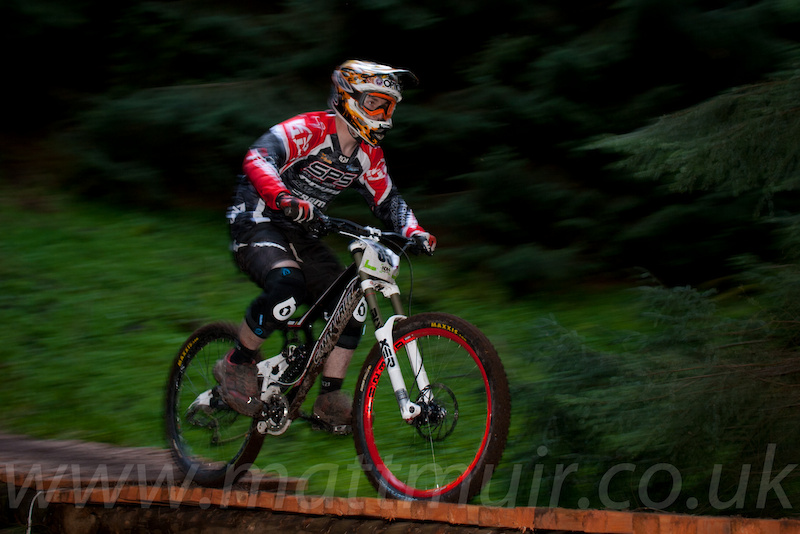 Josh Lewis
Initially you’re lulled into a false sense of security as you carve through some relatively mellow trail in the open top section before crossing the road. But cross that road after just a few hundred yards and all hell breaks loose, the trail getting tighter, more rooty and gradually steeper before coming into the open for the very steep. Switchbacks have been cut into this steep section but being of a very narrow bench cut there is little to no margin for error, especially with plenty of roots spidering across the corners. In their current state there’s a limit to the speed that can be carried through them but with a little work to build them up the flow would improve, and help prevent riders falling off the side of the hill. Especially so in the slick conditions that presented themselves on Sunday after some overnight rain. 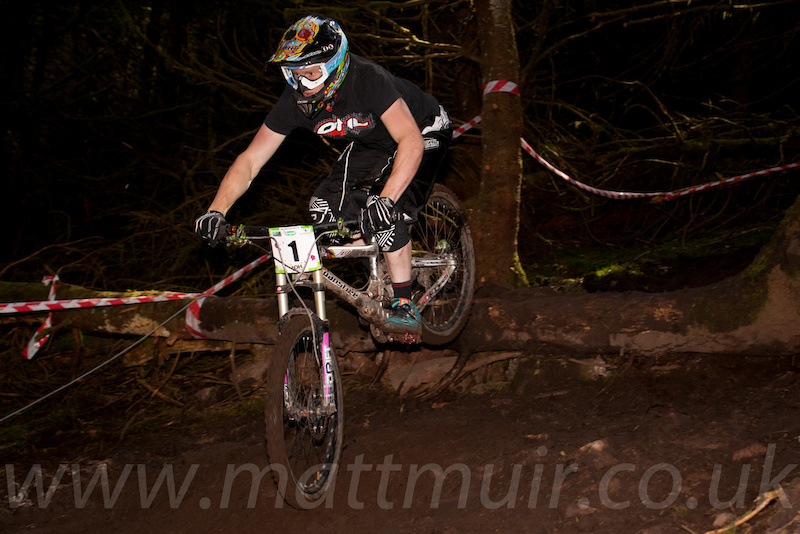 Adam Brayton
Working down the hill the switchbacks gradually get wetter as the ground mellows (it’s all relative), with more roots and some awesome rocky drops and ruts to hit and rail which ensure that no rider is left unchallenged. Reaching the dark woodland again tells you that you’re not far from the finish, the first introduction to these trees being almost blind such is the transition from light to dark, not helping the root infested trail in the slightest. Some fast and wild rutted turns then lead to the first bridge, slowed by several chicanes on entry to prevent riders falling off the side of it at high speed (it’s happened, and it’s not pretty). The last steep chute which seriously phased some riders, cross the second bridge and break the timing beams. 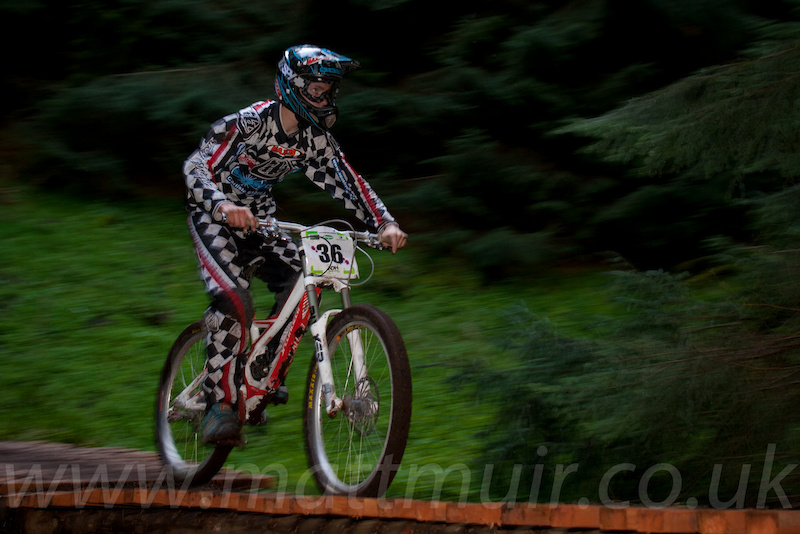 Matty Leggett
Such is the nature of courses like this there were big gaps between some times with crashes playing havoc with riders’ weekend plans. Several dropouts from injuries left a slightly depleted field but that did nothing to deplete the atmosphere which at all times was relaxed and chilled out with no hysterics or excessive egos. With two runs, a compact field of riders and a big spread of abilities there’s a lot less pressure than at some events, even regionals. But that isn’t a detraction for the Northerndownhill series is honest, solid racing in an area that for many years did without, the local riders having to head down to Wales or north to Scotland if they wanted to compete. 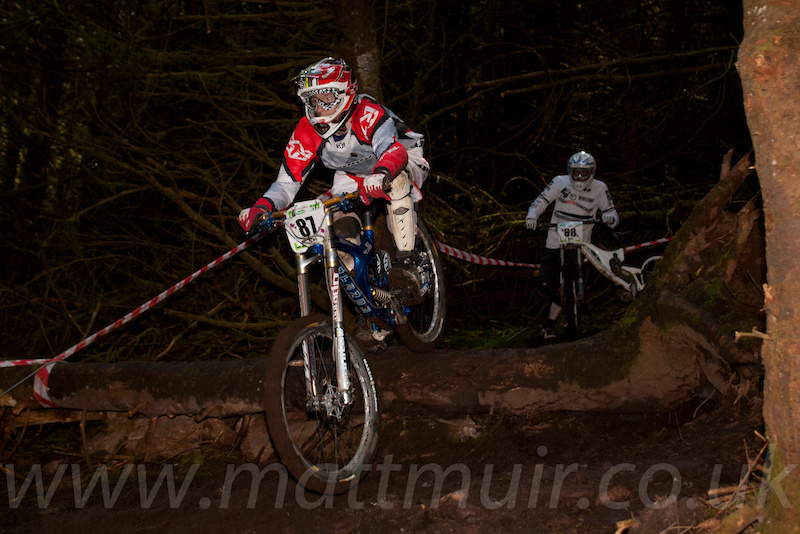 Pete Hoggan
In Juveniles, Chris Kennedy took second on a 3:17 with Andrew Dorrit on the top step with a 3:07 – will there be enough entries at the next round to complete the podium? Into Youth and Anthony Preston was in third with a 2:31, second place going to Rory McRitchie on a 2:29 and the win to Peter Hook just ahead on a 2:24. Ben Stanley was the first to take to the steps of the Junior Podium, his third spot clinched with a run of 2:16. Second was Josh Lewis with a 2:08 but taking the win just two hundredths up was Matty Leggett. 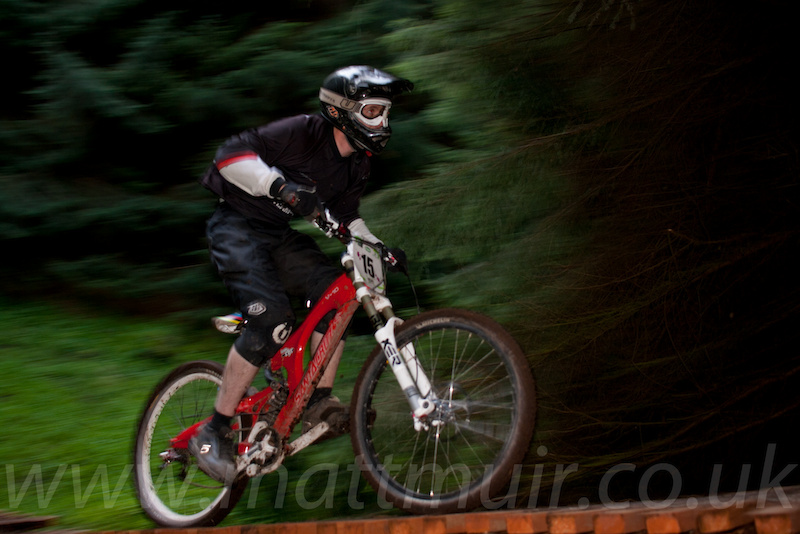 Robert Tait
In the Veteran field Alan Turnbull took third with a 2:40, just behind the 2:37 of Pete Hoggan. Taking the win was Shaun Kelly on 2:27. Does he have the fastest downhilling dog in the country? Phil Grimes took third in Masters with a 2:18 whilst second went to Chris Lazenby on a 2:17. Just two seconds up was Jayson Cavill having taken the win on 2:15. The top ten in Seniors was pretty close given the nature of the track, third being taken by Al Ward with a 2:15, second going to Calum McRitchie on a 2.13. The win however was taken by Robert Tait just three tenths up and also stopping the clock on 2:13. 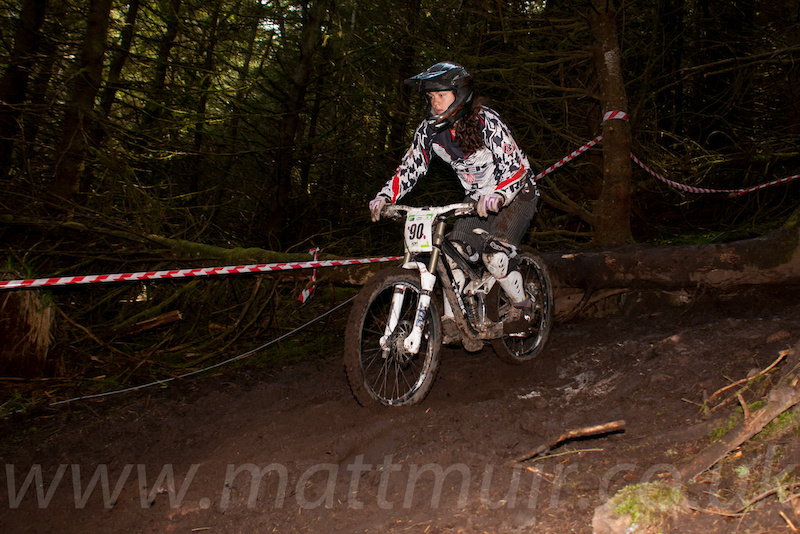 Rebecca Kennedy
In the women's Gina Robertson took second spot, but it was Rebecca Kennedy who tamed the hill the best for the win. As with Juveniles, hopefully round three will see a fuller entry list for the girls to have a complete podium. Nick Turner crossed the line in 2:10 and looked pretty pleased with third spot and a place on the Expert podium, Steven Turnbull just ahead on a 2:09 for second. The win, with an eight second margin, went to Liam Little just narrowly missing breaking sub two minutes with a 2:01. Fastest time of the day went of course to Adam Brayton with a 1:54 in Elite, the World Cup rider well suited to the course and showing most others how it should be done. 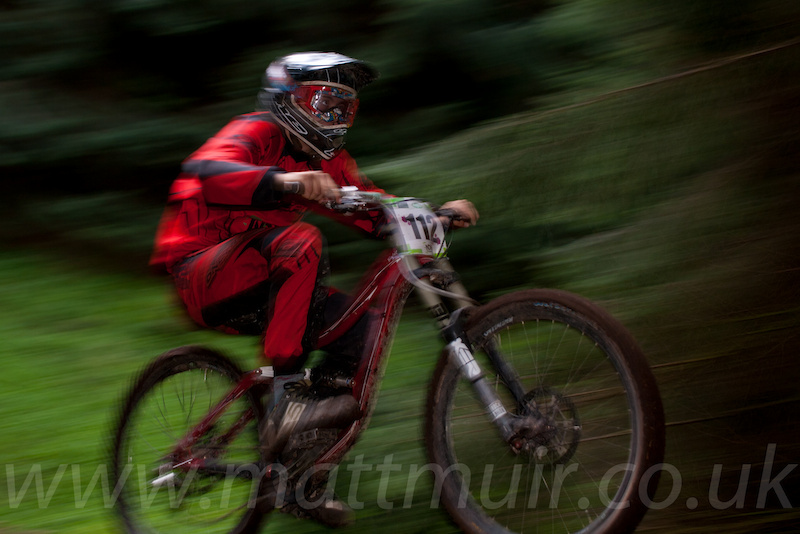 Danny Franklin
The next round takes place on the 22nd May at the Kidland track literally round the corner from that used for round one. Check out NorthernDownhill for details of how to enter.

Full results available here. Thanks to Matt Muir for kindly providing us with pics for the report. Check out his website here.

cloverleaf (Apr 27, 2011 at 14:02)
It was the only place where you could even think about sitting down. On the friday that bridge was sketchy as ken when running into it and hitting the compression, it just about spat you off the side and into the bog underneath if you weren't careful. Probably a good thing that there were a few chicanes put in to slow you down... There were a lot of guys there who were pretty inexperienced - I'll happily say I wouldn't have wanted to do that track as one of my first races many years ago, that's for sure!

lodonnell243 (Apr 28, 2011 at 3:07)
I raced this last year as my first ever race. Second race run was the only run I had all weekend without coming off. Good fun though, great track.