Video: Getting Back to the Trails on an Adaptive MTB in 'Beyond the Reach'

In may not seem like much today, but the athletic moves and tricks of snowboarding and mountain biking in the early 90's were breaking ground on a daily basis. New rotations not seen before were added to snowboarding moves, and ski-like lines and cliffs were being navigated by skinny-tired, front-suspension-only bikes. Both sports were brand new and the pioneers were going bigger, faster, steeper - each day in the mountains or on the ski-hill, someone else pushed through another limit and they had no idea where it would stop.

At a snowboarding big air contest, athlete Christian Bagg found out where he would stop. A wrong landing broke his spine and his progression with mountain biking and snowboarding as he knew it was over.

Confined to a wheelchair, Christian still had the drive to get out and explore the backcountry. After years of development and experimentation, he developed the Reach adaptive mountain bike. Not only did this allow him to get to areas a regular wheelchair couldn't but he realized his invention allowed others in his position to join their family's on hikes, to see the outdoors, and to ride with friends. This inspired Christian to create Bowhead Corp and develop the Reach on a bigger scale.

And now that the bike is perfected, this has allowed Christian to get out onto the trails and push himself with his own riding - and get those same pioneering thrills he got way back in the mid 90's. 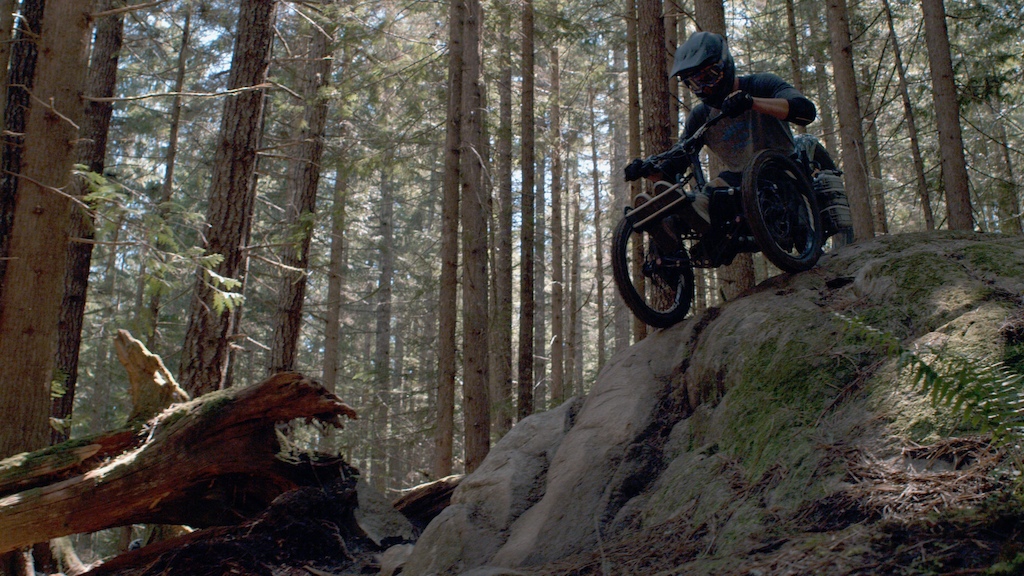 For more information on the Reach - www.bowheadcorp.com

i've been paralyzed for 6 years and riding mtb handbike for 4 years, but this bike i have is slowly giving up and not nearly as capable as bowhead

i'd be more than grateful if you consider donating to my fundraiser, i need this bike to continue pushing and progressing, can't state enough how much that means to me

enjuto (Nov 9, 2020 at 4:30)
OK let's put our money where our upvotes are! I just did ( I know it is very bad taste to publicise you have done a donation. I am sorry, I just want more people to help. it takes to minutes and just do not buy that box of doughnuts you were thinking of for today’s coffee, donate the money instead. Your body will thank you and so will do this MTBer pal in need. )

froman82 (Nov 9, 2020 at 8:37)
@nikifor88 I hope you reach you're goal. I too have an SCI and the bowhead reach looks like the answer to my dreams of re-joining my buddies on the trails and be able to hit the same terrain as they do. Best of luck and keep doing what your doing.

nikifor88 (Nov 9, 2020 at 11:06)
@froman82: exactly, its about joining buddies on trails, i mean we ride together but there are just ffing three green trails in poland that are accessible for my current bike and i feel like im dragging them down even if thats not true. on bowhead every trail is accessible and possibilities almost endless

good luck to you too, man

adaptivemike (Nov 9, 2020 at 11:55)
Hey Nik In the mean time we have a Reach available for rental with Kootenay Adaptive, get in touch any time and good luck!!!

npinder2002 (Nov 9, 2020 at 13:20)
@froman82: Not sure if you're connected with Highfives Foundation, they might be able to help out. The assist motor has really hit maturity on a pile of Adaptive bikes in the last few years, so it's a whole new ballgame for mountain access now.

nicfugere (Nov 9, 2020 at 15:10)
i want, and i will contribute, but i have a legitimate question: does Gofundme do some sort of checkup to prevent scams or is it on a trust basis? I don't mean to be cynical, but genuinely curious about the scam risk on Gofundme. On another note, i saw your gofundme page and have no doubt about it's credibility. Good luck on your project, i really hope you get the chance to ride that nice Reach bike! cheers

npinder2002 (Nov 9, 2020 at 17:05)
@nikifor88: Ah ok. Thats unfortunate. Ideally that will change in the future, hopefully this kind of content will raise more awareness and interest.

darok (Nov 10, 2020 at 0:19)
@enjuto: I don't think it's a bad thing to say that you donated...not at this scale.
It's important to show other people that we care and not just talk about it..so for me it's just the right thing you did!
Amazing how little it takes to get this going again ;-)
I want to see Nikifor riding on this bike soon!
Thanks to all for supporting him.

polok (Nov 10, 2020 at 2:20)
@darok: As a Niki's good friend i can tell you he is keeping huge progress on handbike and the best thing you can do is just shere this fundraising to your biking friends and family. Let help him to get this thing!

He is a real shredder! I can't wait to make a lap in bikepark with Niki on a brand new bowhead bike

darok (Nov 10, 2020 at 2:57)
@polok: That was my impression when I made my donation a few month ago. After reading his story it was totally clear for me that I have to support him.
And obviously he has some awesome friends too!

We have tried to get attention on polish bike sites but they just said 'no'. What a shame, i think they don't even ride bikes

What if there were a running Gofundme account the entire industry supported for paralyzed riders to get one of these bikes? They could just sign up and as the fund hits the price of the bike, the next in line gets one...or something.

I’d certainly contribute to that.

dodgerpuppy (Nov 8, 2020 at 15:36)
Agreed, I just hope trail managers understand the difference between an adaptive bike which utilizes a motor and an e-bike/e-motorbike that would otherwise exclude from the trails.

nicfugere (Nov 9, 2020 at 15:00)
Much respect man, on both persevering in the practice of your sport, and creating such a nice piece of engineering that will bring so much joy and good times to people who could not otherwise explore nature and wild places in this adventurous way. cheers and thanks for your contribution!!

DoubleCrownAddict (Nov 9, 2020 at 5:21)
Impressive engineering and design, looks fun. That staircase ride at the beginning brought back some memories.