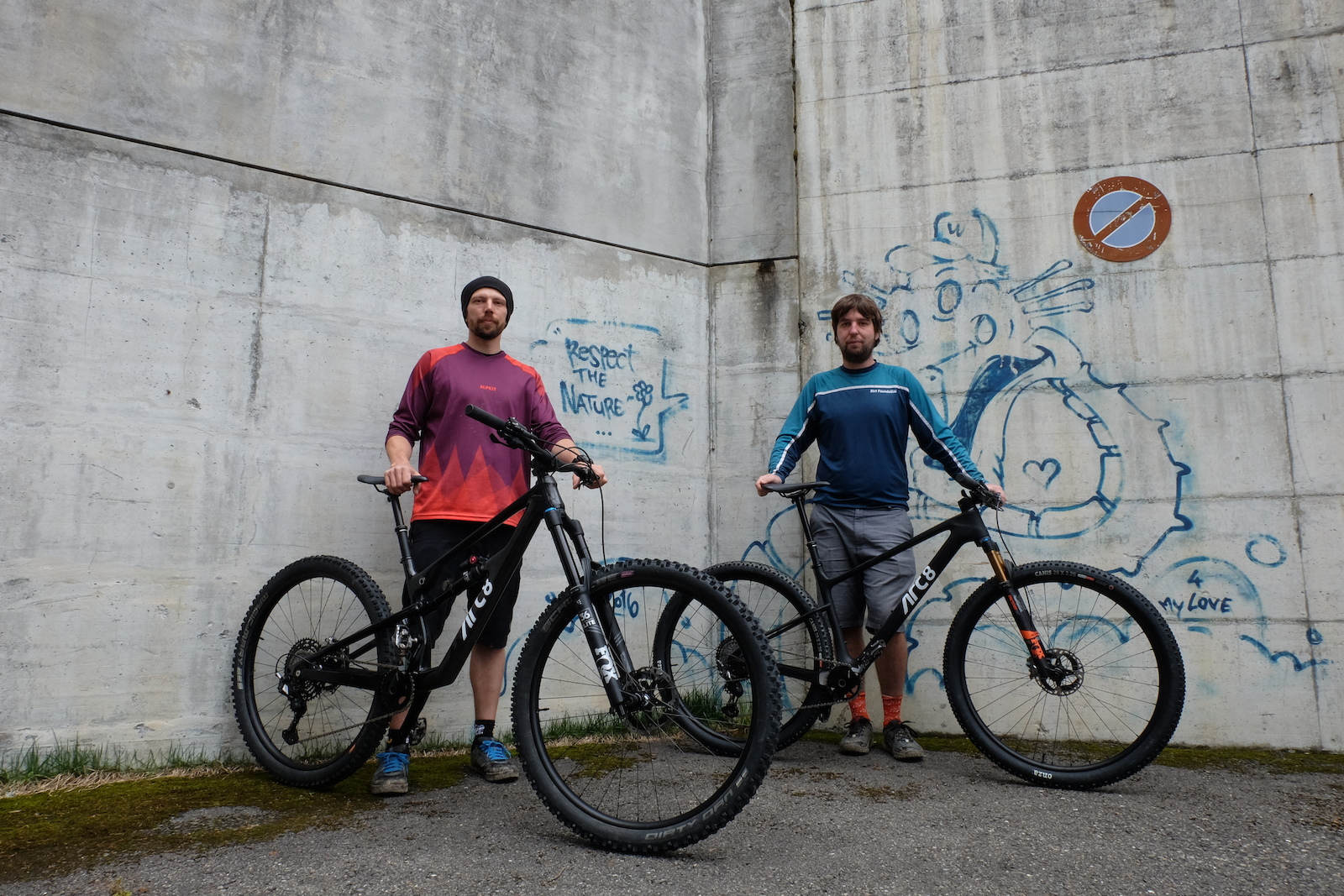 ARC8 is made up of two Swiss gentlemen – Serafin Pazdera and Jonas Müller. Serafin is a graphic designer and web developer based out of Basel, Switzerland. Jonas is a bike engineer based out of Taichung, Taiwan. The two spent most of their younger years together as bike messengers, snowboard instructors or just riding bikes for the love of it. The latter is clear to see with the mile-wide grin that is plastered on their faces when they jump on a bike.

Jonas ventured off to Taiwan after working for some well-known Swiss brands, and was stationed there full time as a bike engineer, right at the sharp end of where 3D designs come to life and emerge from steaming molds recognizable as the things we ride.

After a while Jonas went at it alone and set up his own company developing projects that other brands could take on from that point, or use Jonas’s expertise to ensure that they were produced correctly. This company is Beta Bicycle Engineering. When reaching out to Serafin for some graphic and website input for this newly formed company it became vividly clear that together they could achieve much more, and so they founded ARC8. 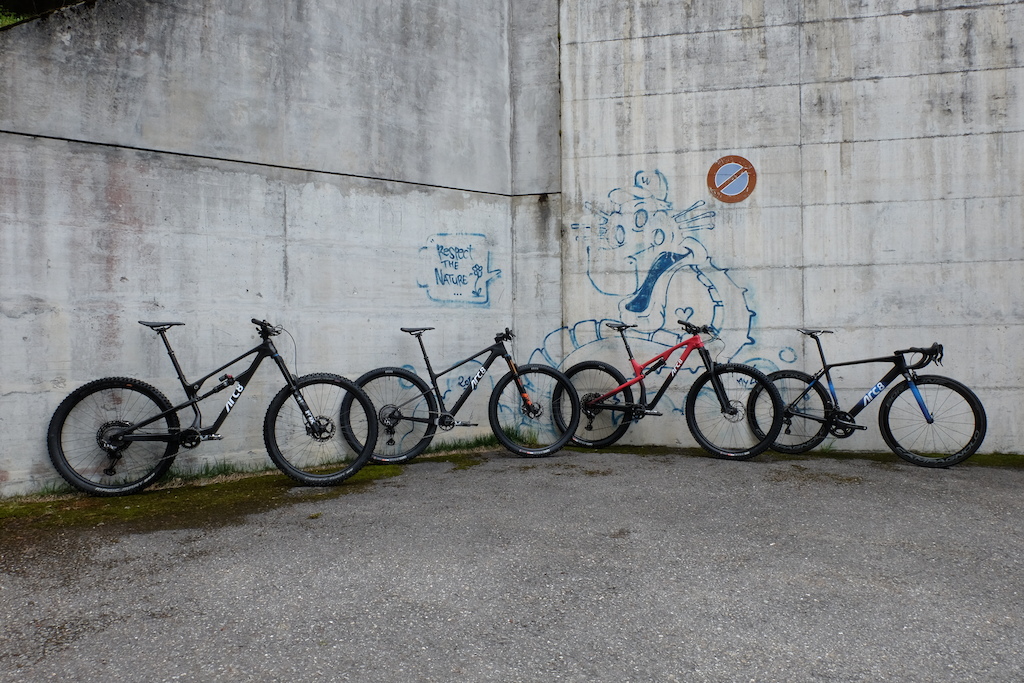 How Are They Different?

Some brands have engineers or personnel stationed out in Asia, right where the bikes come hot off the press. This helps by drastically shortening the communication line and results in far less volume-eleven Skype meetings to get ideas across or remedy issues. Not all brands have these people out on the front line, and so take multiple trips each year to personally be there at the most critical milestones in the development timeline.

In both cases, 99% of the actual development work is done back at base at the headquarters of the company. And this is where ARC8 start to differ from your run-of-the-mill bike company.

Jonas’s expertise is vast and encyclopedic, not just in recalling who got what position at that race back in 2001, but at how the Asian manufacturers tick. He speaks their language, literally, and can efficiently communicate with them on a friendly level that opens up all kinds of doors and opportunities unavailable to the normal long distance relationships.

His expertise and knowledge, both theoretical engineering and practical manufacturing, are ploughed straight back in at the start of development and directly have a huge influence on the products themselves. The speed of development for ARC8 is staggering, and the quality of design and production seem to match this speed.

But coming back to the fundamentals of our sport, we just have two guys who clearly love bikes, and this too gets put back into the products for them to enjoy, let alone the customers.

Escapee - On the tarmac side they have a really clean and tidy road bike in both rim and disc brake versions.

Evolve - An XC hardtail molded in only one piece, which, speaking from personal experience, is one hell of an achievement.

Extra - A full bore 160mm travel 29er that we took a closer look at in a First Ride article. 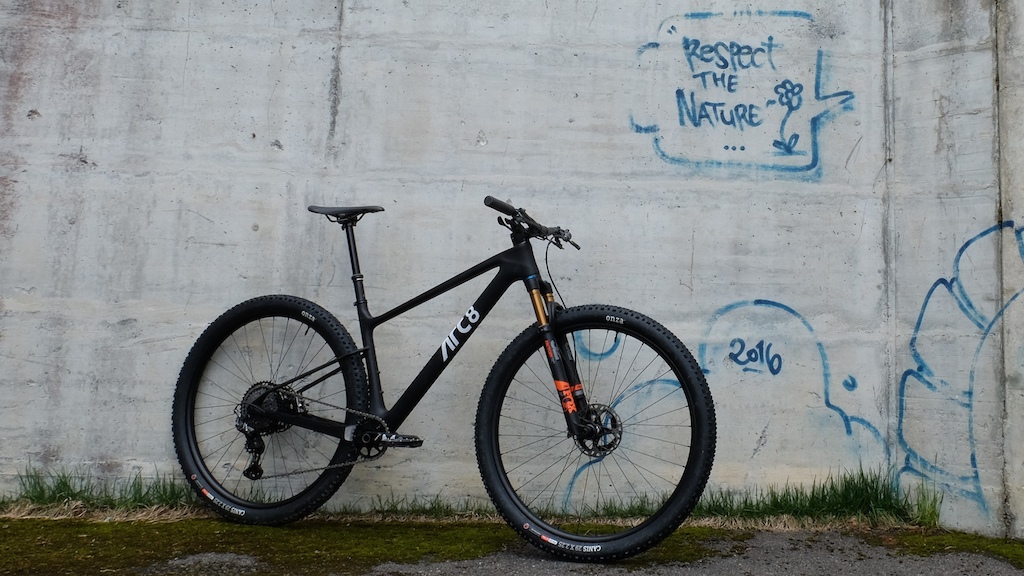 The Evolve is an XC hardtail that steps away from the potentially nervous geometry and sizing of some current hardtails and has a package of generous reach, low BB and slacker than normal (for an XC race bike) head angle. Added to this there's consideration for the comfort of the rider with engineered flex in the structure and even routing options for dropper posts. All of that is wrapped up in a sophisticatedly molded frame with clean and clever tube shapes. 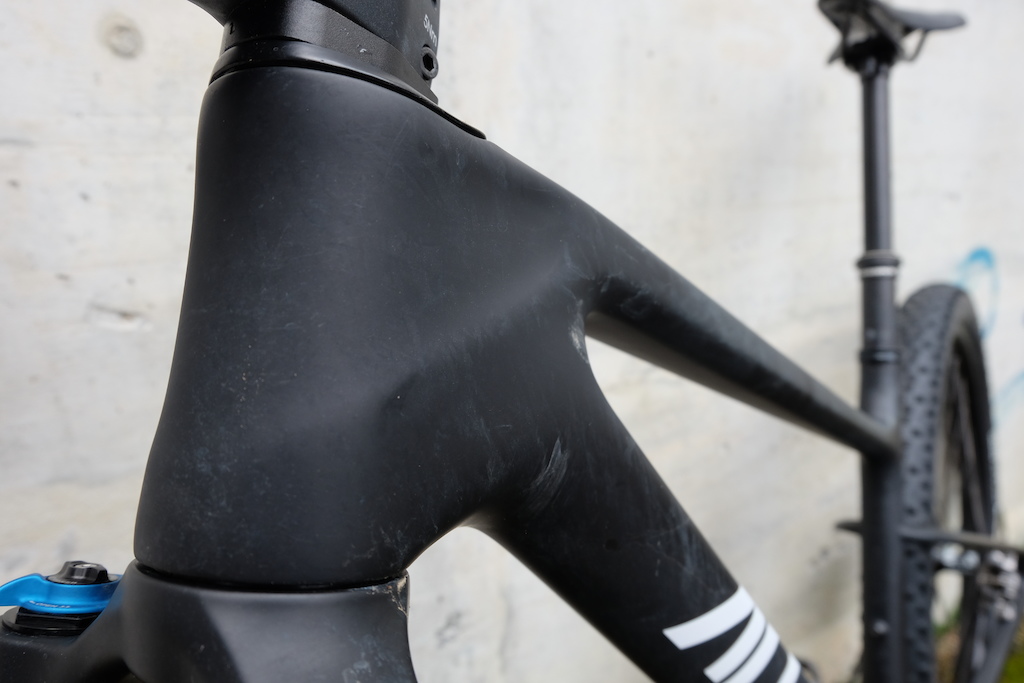 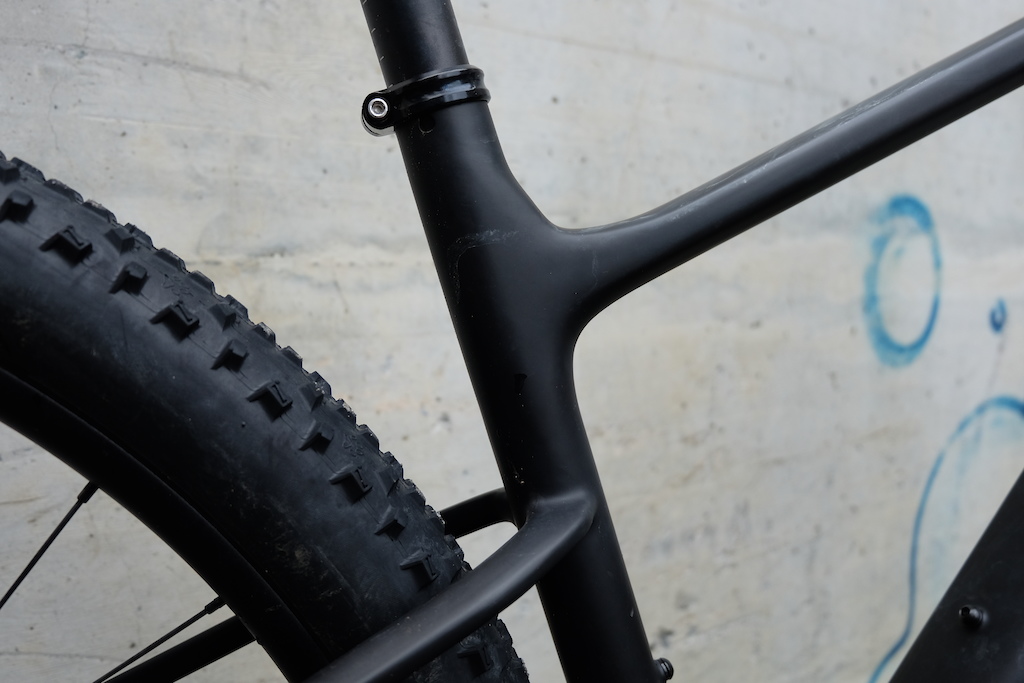 The entire frame is moulded in one shot and the dropped seat stays bring comfort to the chassis.

Most carbon frames are molded in several pieces which are then bonded together to form the final frame. This reduces the size and complexity of the molds, but requires added material at the joints. For larger numbers it’s easier for factories to do like this and accept the added manufacturing steps.

The Evolve hardtail is moulded in one shot as a complete frame, requiring no additional joint material and opening up the frame to have long flowing paths of fibers running through the bike, handling all the stresses and strains. The mold needed to do this is more complex, but this method has its advantages when pulled off. Having smaller quantities, such good communication and integration with the factories enables ARC8 to accomplish this feat.

In a traditional hardtail layout the seat stays form their connection with the seat tube high up, normally right where the top tube does too. The Evolve drops the seat stays down and reduces the amount of support they provide to the seat tube. This allows the seat tube to flex more freely adding comfort to the rider when their weight is on the seat. It also shortens the tube length, saving a bit of weight in the process. If you’re into your road bikes you’ll already be familiar with this frame look.

There’s no point in designing a lightweight bike that will hold three times its own mass in mud stuck to it. Big flat surfaces collect mud, and the Evolve takes on a teardrop profile that's intended to prevent mud from sticking to it. 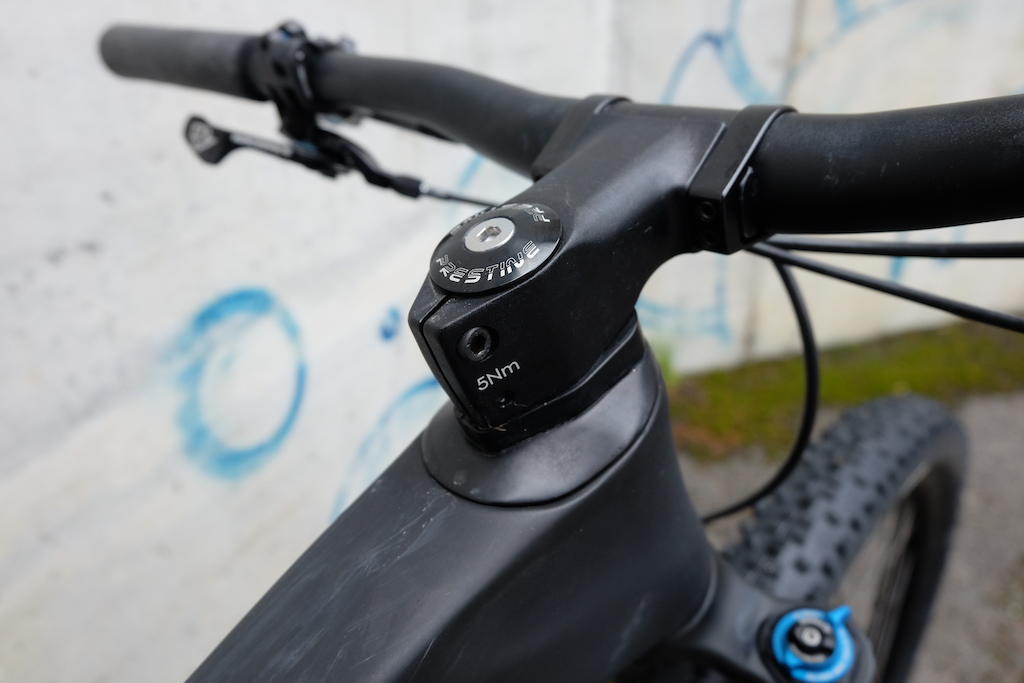 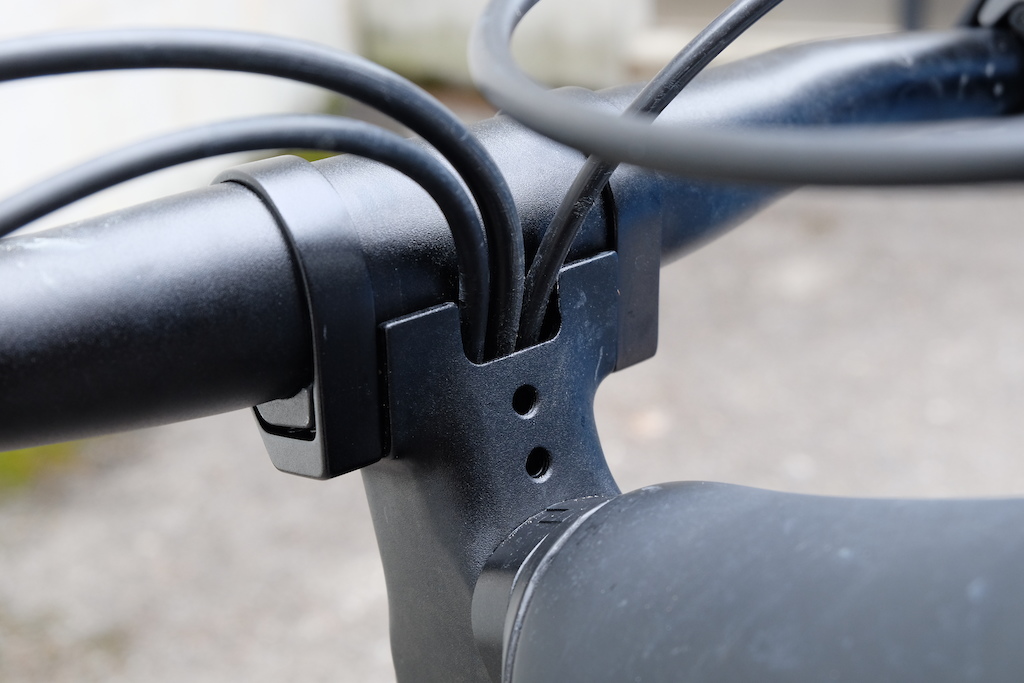 ARC8's own stem and headset uses familiar industry standards to get the cables cleanly inside the frame.


Another feature brought over from the road side is the stem and headset system used on the Evolve. The cables enter the frame via the underside of the stem and flow down through the headset and into the frame. It negates any need to make big holes in the frame right at one of the most important junctions and keeps the cables routed tidily.

Integration isn’t for everyone, but if it is your thing then this solution looks very clean and well thought out.

The Evolve's geometry is definitely more aggressive than more traditional XC hardtails, a trend that's becoming increasingly common as race courses become more technical. Given its intended usage it certainly has attacking both the ups and downs written in its DNA. The seat angle isn't mega steep, but when combined with the short chain stay length and geometry designed around a shorter 70mm stem it should give a comfy position to get the power down and climb like a proverbial thing that climbs really well. 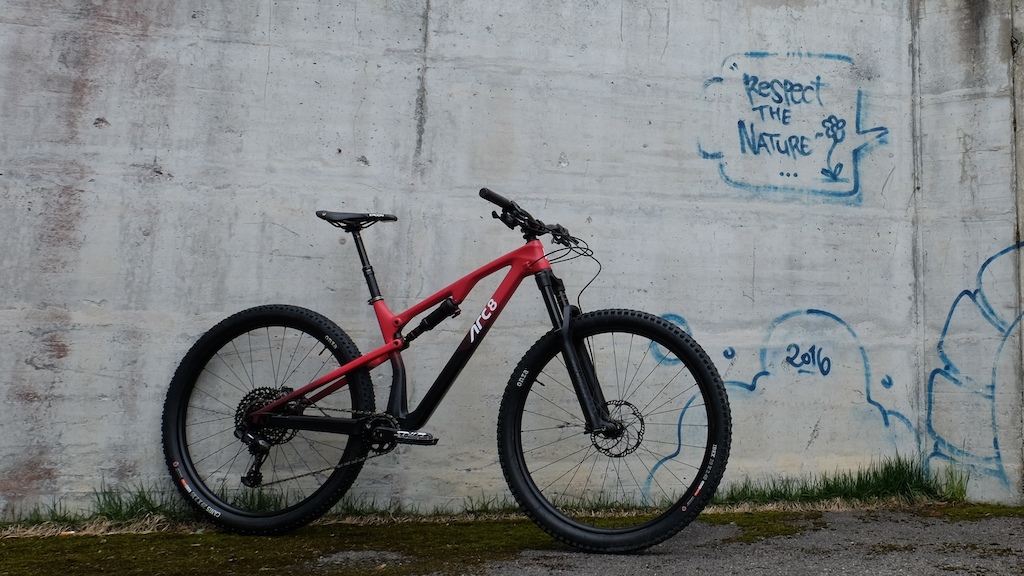 The Essential is a short travel 29er with both fun and long days out in mind. It was ARC8's first MTB product and came about as it would be the bike that they'd ride most. It kind of follows the ARC8 philosophy of no-nonsense by doing a good job of encompassing nice geometry, suspension and features.

There are no shouty marketing claims and it also follows the rest of ARC8's bikes in being well made and up to the task in hand. 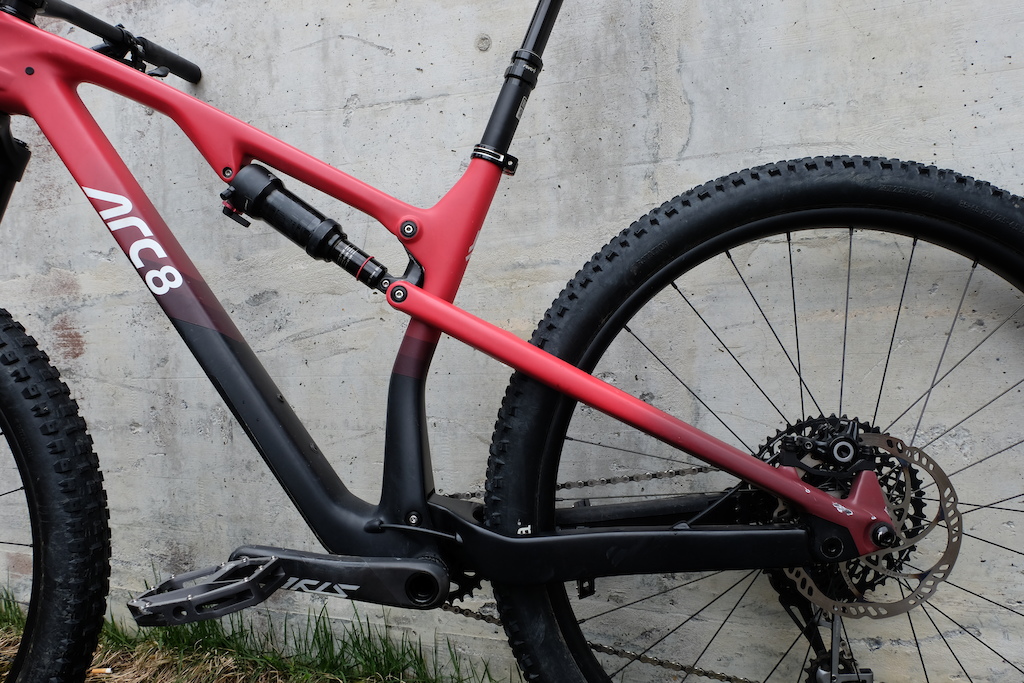 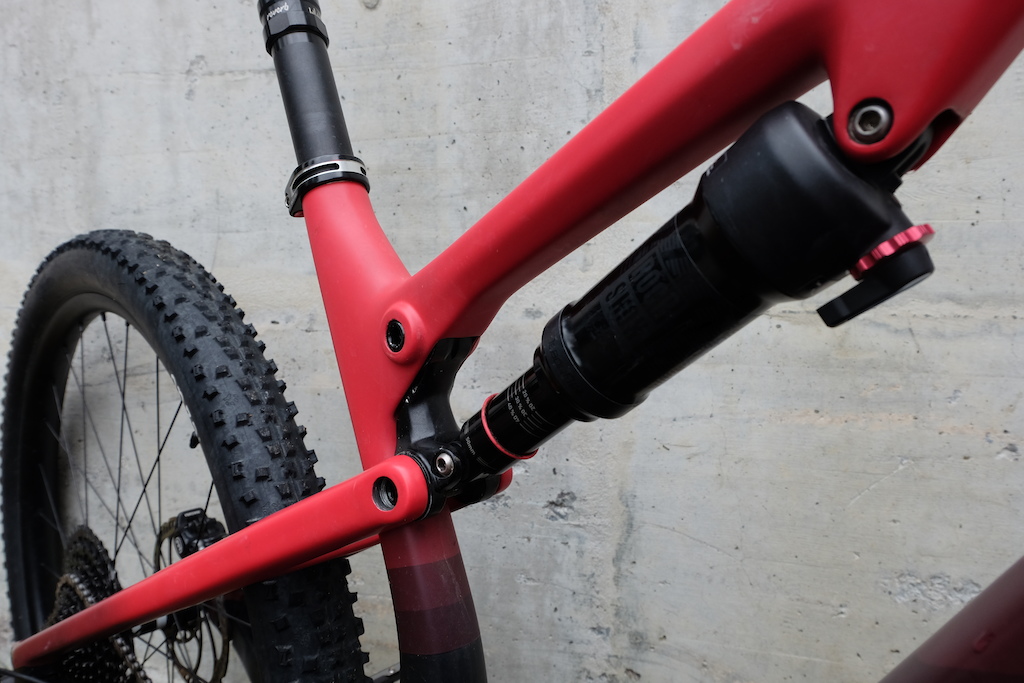 The Essential's suspension layout is uncomplicated and drives the shock with a small, tucked away link. 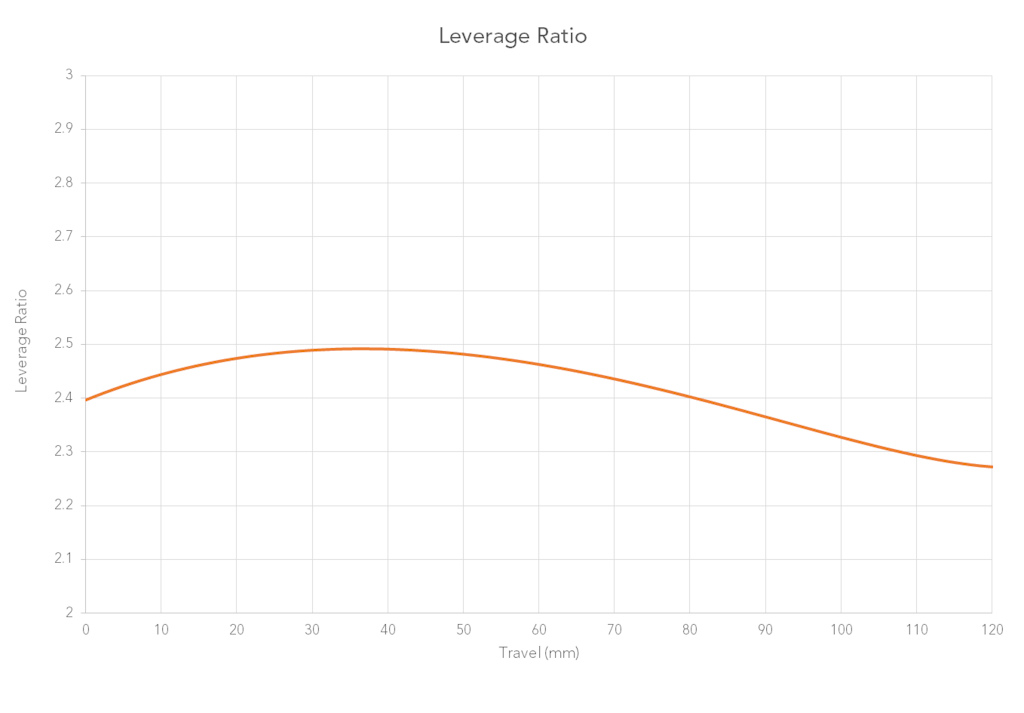 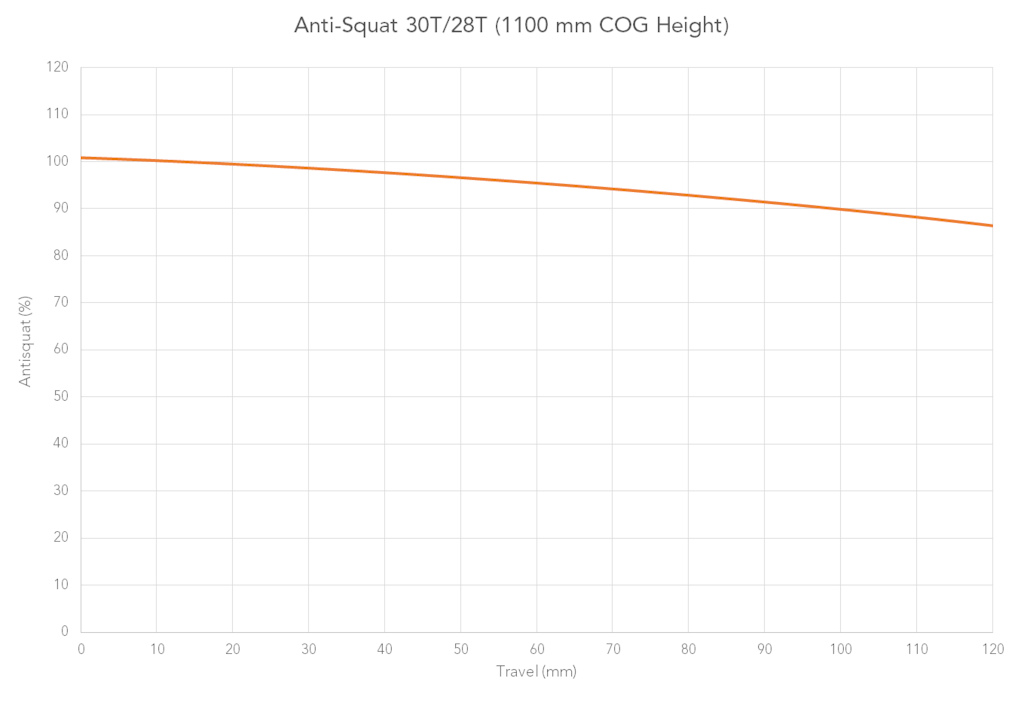 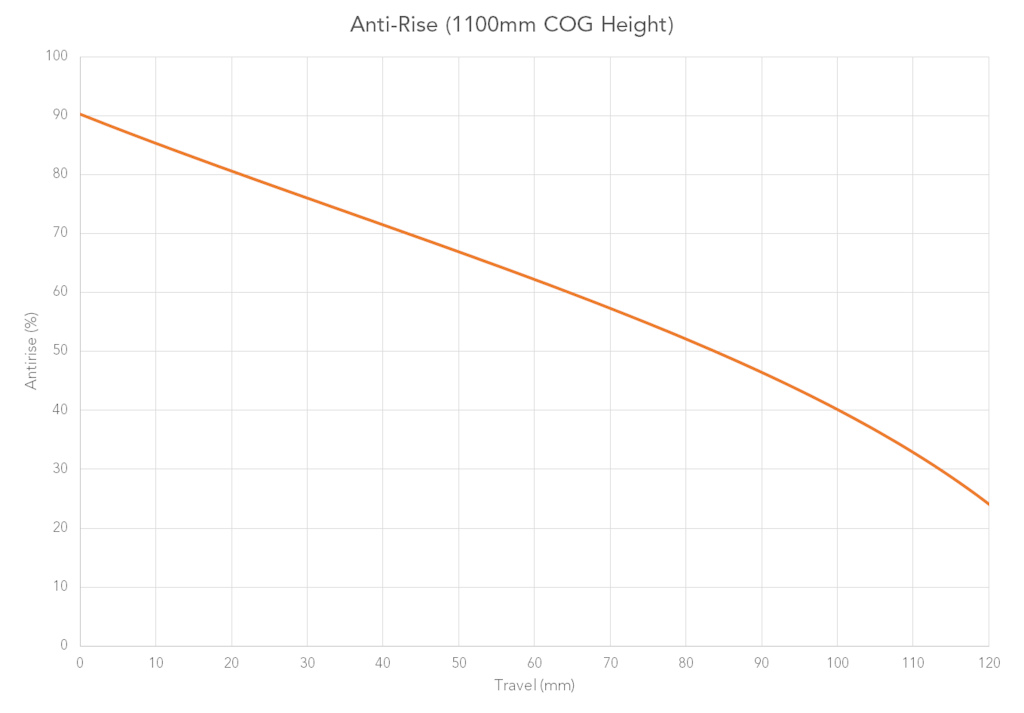 The Essential uses a Horst-Link pivot and top tube mounted link suspension layout to generate its 120mm of travel. Its leverage ratio is more in the linear camp, with just under 10% progression, and when set up with a normal 25% to 30% of sag it should give some good support for the big hits with a token or two installed in the shock.

There's just shy of 100% anti-squat, which will go a fair way to combating the mass transfer effects from pedalling your bike forwards. A bit of suspension bob might come about from the mass of your legs spinning going into compressing the suspension. But the shock's lockout lever is easy to access with the shock being tucked up on the underside of the top tube. 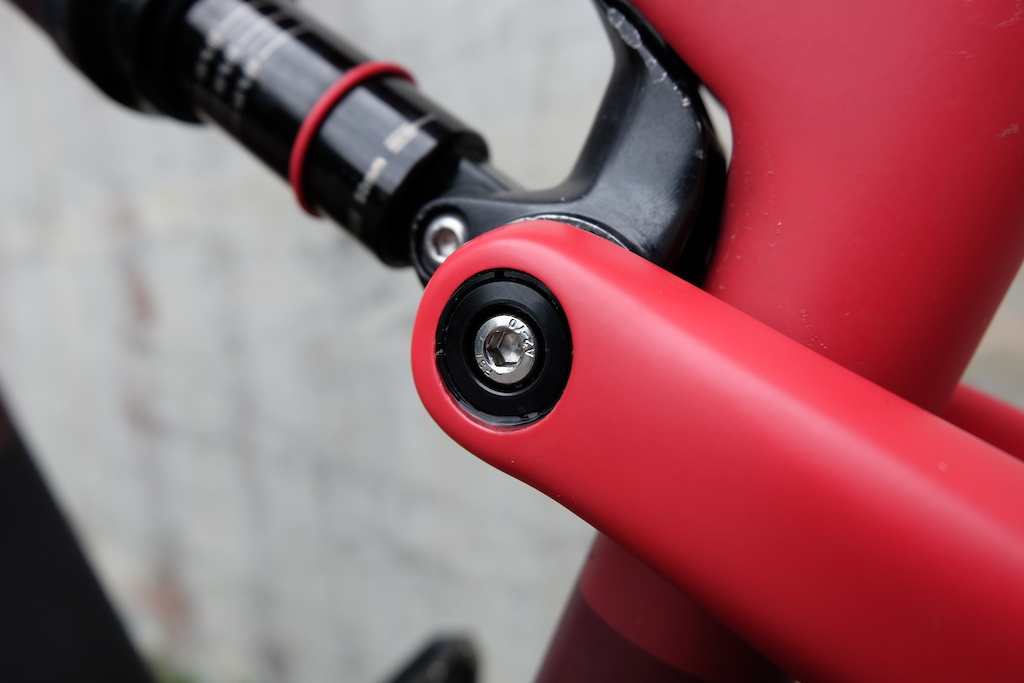 Through axles generate a sturdy pivot and the small wedge locks them in place. 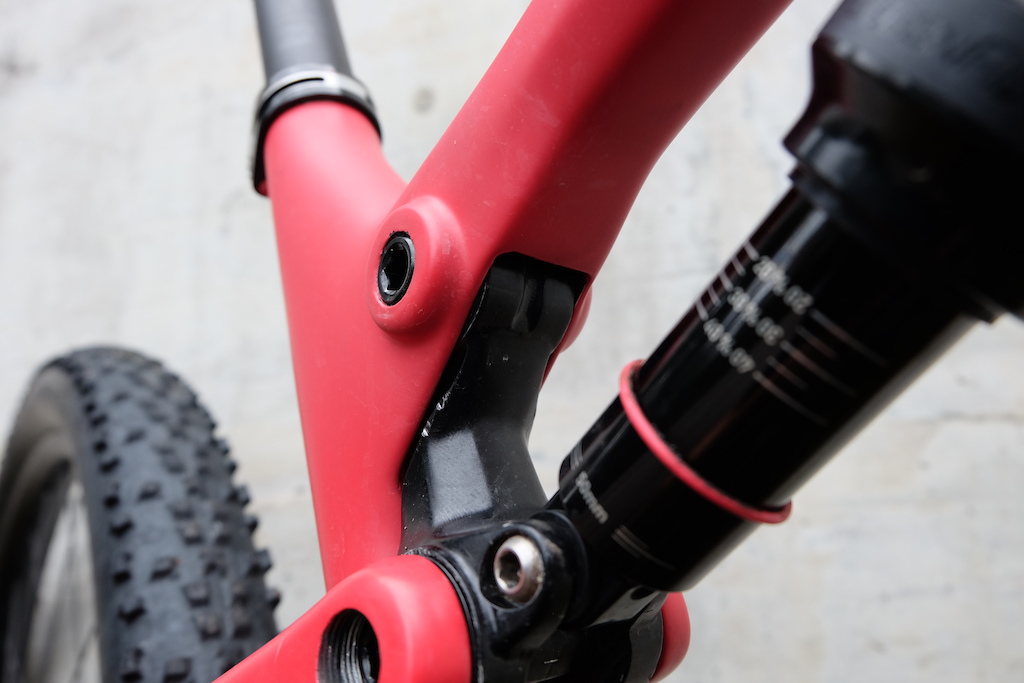 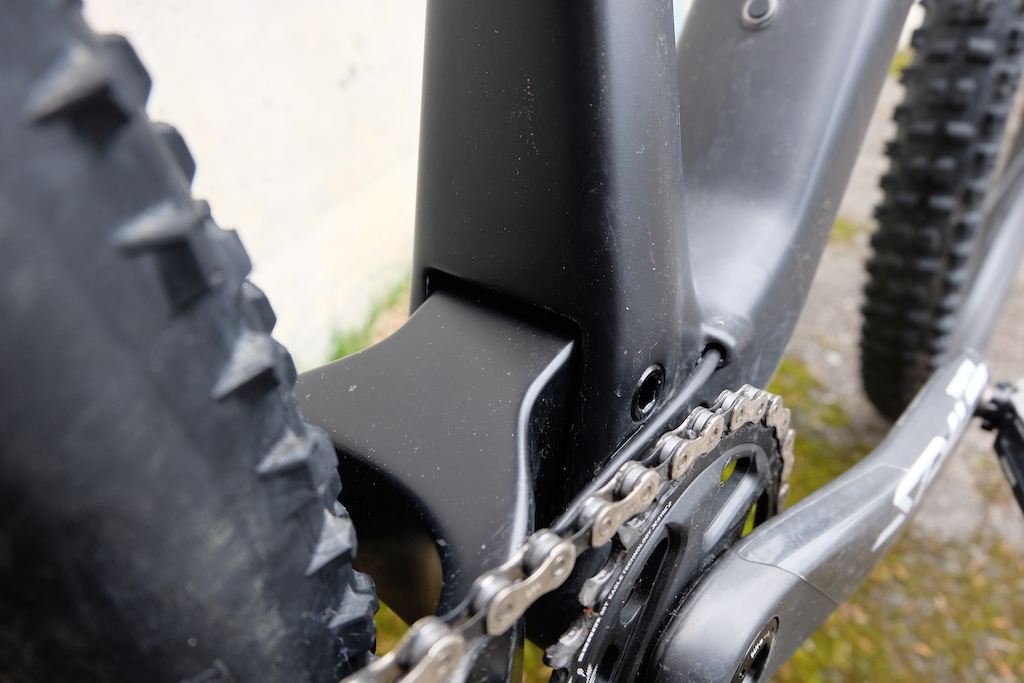 The link and chain stay mount inside the tubes of the main frame.

The Essential carries on the theme of fitting the job in hand nicely with its geometry. Again, reach numbers should provide a comfy place to be when stood, but the lack of an XL does mean that tall folks will suffer. Seat tube angle is on the slacker side of things and does translate to a long top tube, which might need the seat sliding forwards if you prefer to sit more directly over the pedals. The chainstays are short, and along with the not-too-steep, not-too-slack head angle should help the bike maneuver in and around the trees with a spritely feel.

Overall, it's a more contemporary than new-age-extremist take on the geometry for the Essential, which does fit well to its claim of being a fun little mountain bike for everything from short blasts or long days out exploring.

zonoskar (Jul 5, 2019 at 2:37)
Sawthem on the Eurobike last year. I was surprised no mention of ARC8 on the big bike webistes. We did cover them on velozine, but hey, we're small. Very nice guy's there and if I was in the market for a new bike, I'd certainly have the Essential as a serious option. I just don't really like the way the bottom pivot looks. It looks like mud and other stuff would mess with the rotation.

XCAussie (Jul 8, 2019 at 1:35)
A lot of new boutique builders appearing all the time.... however these guys are going at it, with a solid background. Hats off to the two of you and your definitely short listed for my next XC rig. Love the innovation your already showing at an early stage!!

pk71 (Jul 5, 2019 at 3:42)
I have already seen several of them starting with a van, a desk and a computer and not getting anything but a computer, a desk and a van. To do things right you must have a business, not a real estate agency.

Flyingdinosaurhunter (Jul 5, 2019 at 1:25)
Of course. One of the founders lives in Taiwan and developed lots of carbon frames for other brands. So that is where the frames are produced.

These are actually the exact same full suspension frames as the german retail brand Müsing (that were also developed by Jonas Müller, the Taiwan guy), only the hardtail is an original frame (for now).

Toutnoir (Jul 5, 2019 at 2:18)
@Flyingdinosaurhunter: I've read they were planning to sell their frames to other manufacturers but didn't know it was already effective. Good way to lower costs.

jclnv (Jul 5, 2019 at 0:57)
Poor cable routing, not enough progression in the suspension, RC is too short on the medium and large, rear slotted seat clamp leads to more water inside the frame. Otherwise it's okay I guess.