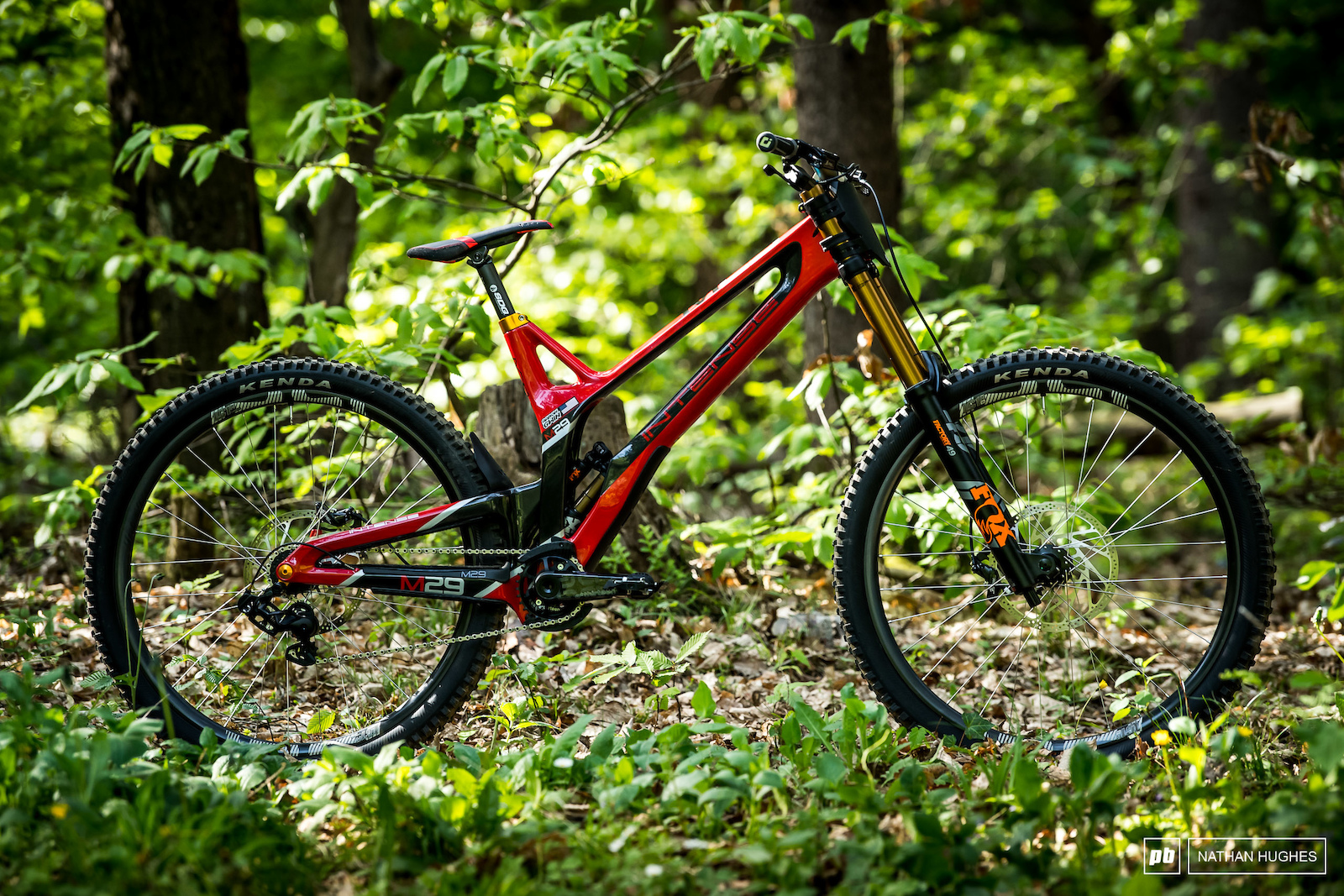 Aaron Gwin is riding into the first World Cup of 2019 on a new bike and with a new team (that he owns himself).

In February, Gwin won his first race of the season in Fontana aboard the M29. As a threat at almost any race he shows up to in good health, Gwin has as good of potential to land on the top step Sunday as anyone. After landing second in qualifying today, it's apparent the speed is there.

Aaron will be racing on his Intense M29 FRO this weekend. We caught up with his mechanic, John Hall, to get the low down on his bike set up and the changes that have taken place with the new team for 2019.

Even with the switch over to an entirely new team with a new frame sponsor, according to Hall, Gwin has adapted to the changes very quickly and there haven't been any struggles in getting the set up dialed in. Helping with that, most of the parts sponsors carried over to the new team from last year, making everything feel comfortable from the start.

Is the new team, frame, and a fresh start the winning combination for Gwin? We will see on the clock come Sunday when he crosses the finish line in Maribor. Check out the photos and audio below. 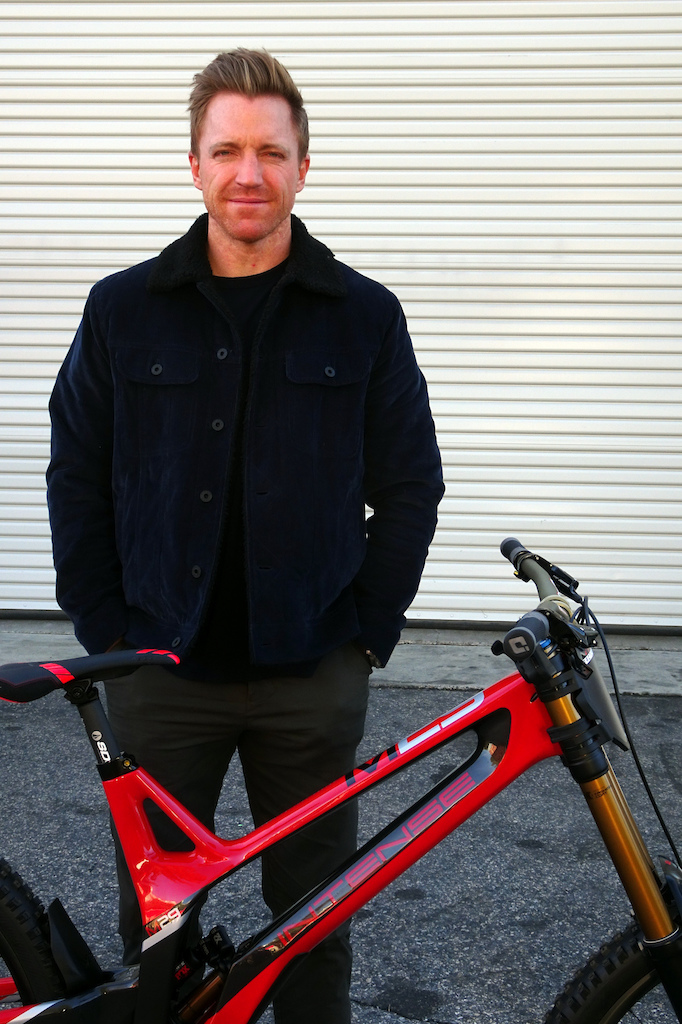 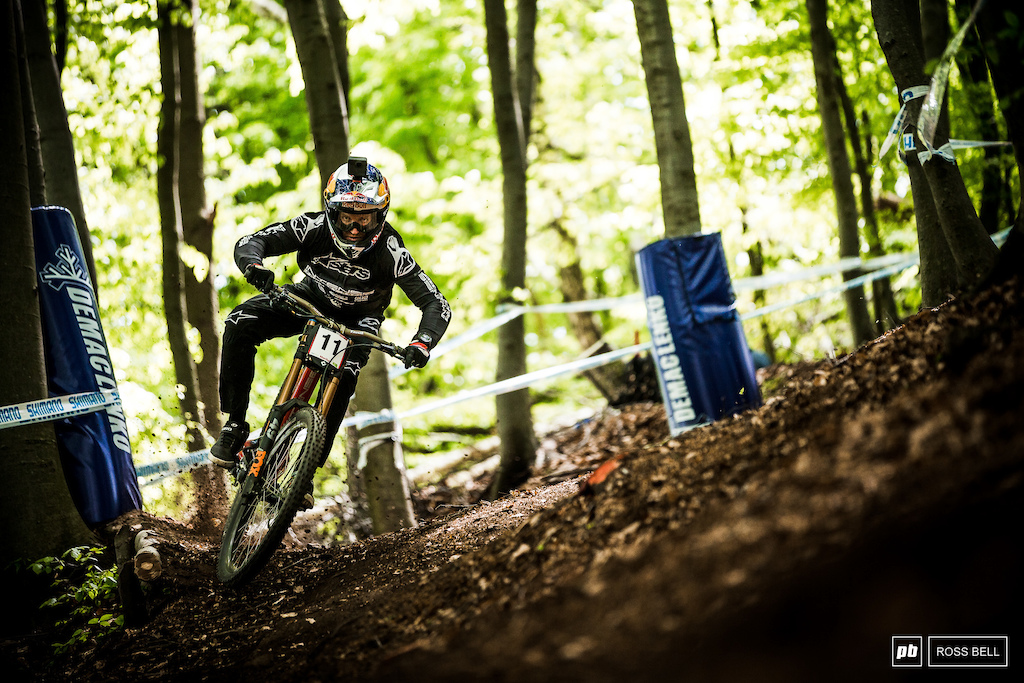 Gwin in practice, looking comfortable as ever. 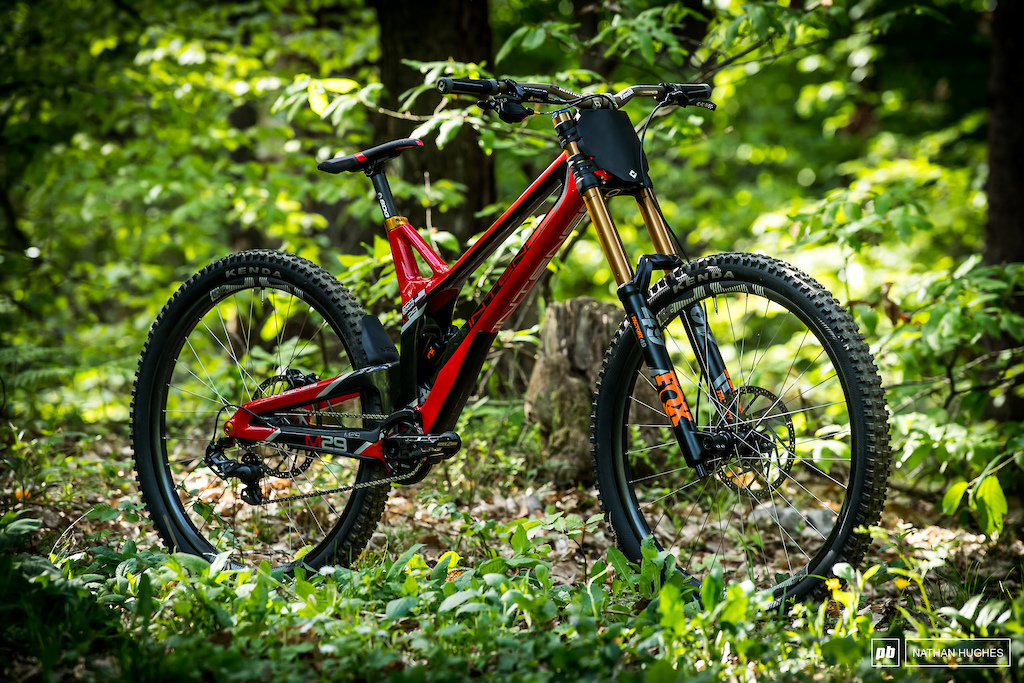 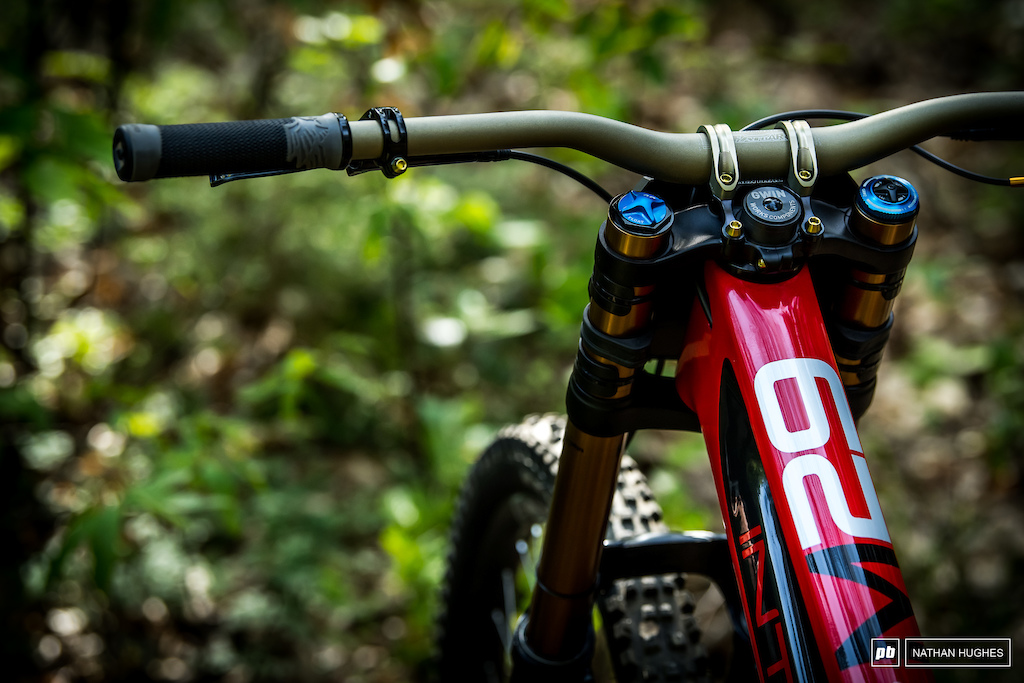 The M29 is quite a bit different than the YT Tues he was on previously, but according to John Hall the M29 was easy to adapt to. Works components headset increases the reach by 6mm. 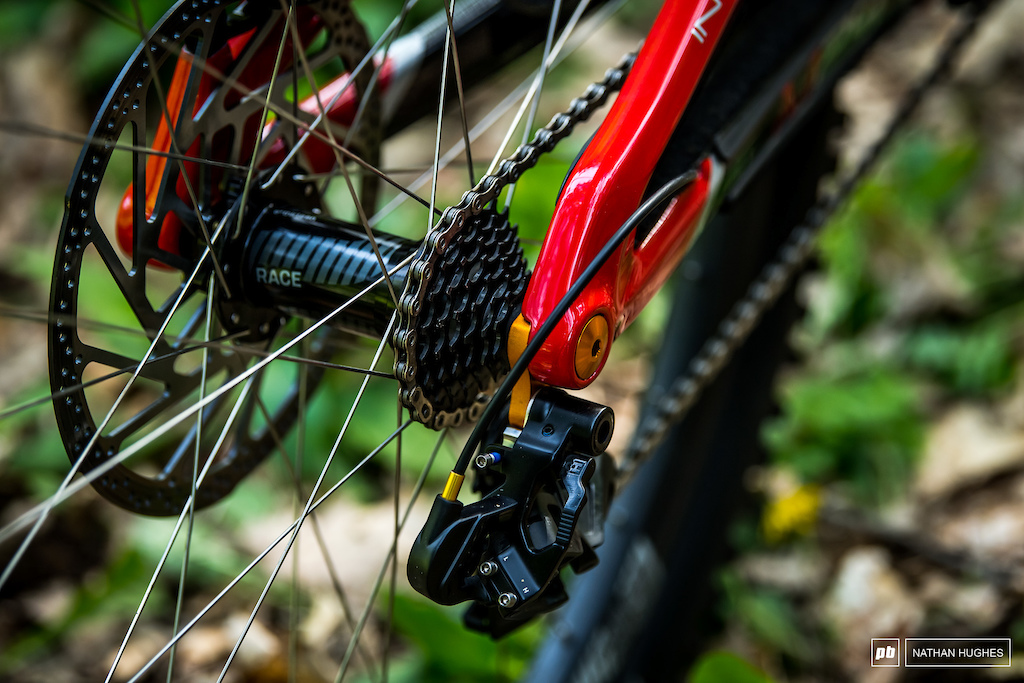 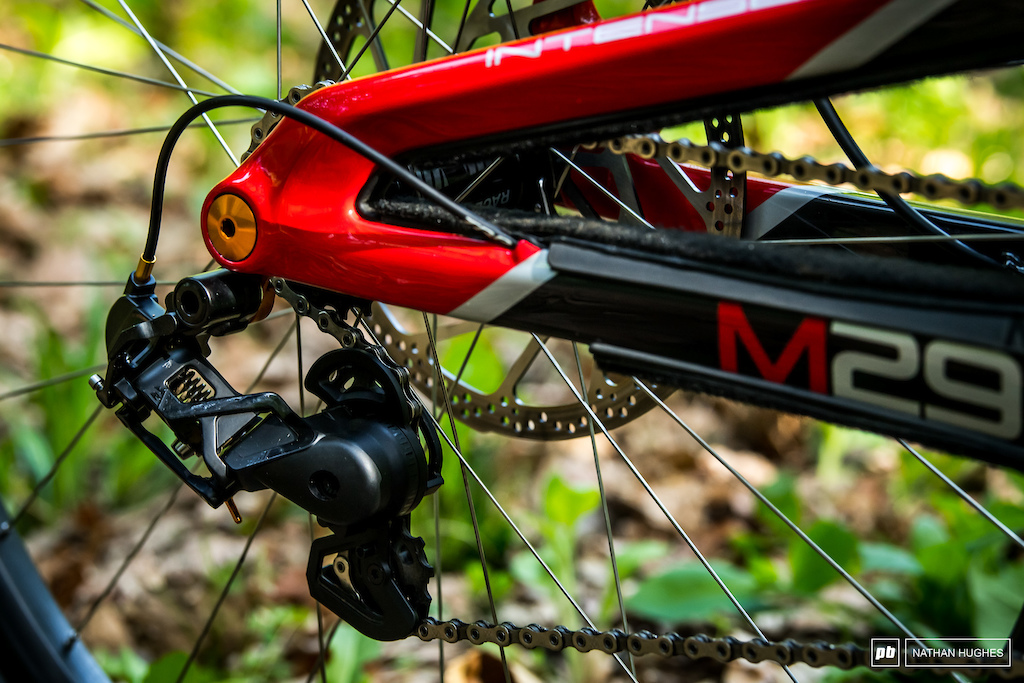 TRP's DH drivetrain. The gold bits are found on the FRO (For Race Only) bikes from Intense. 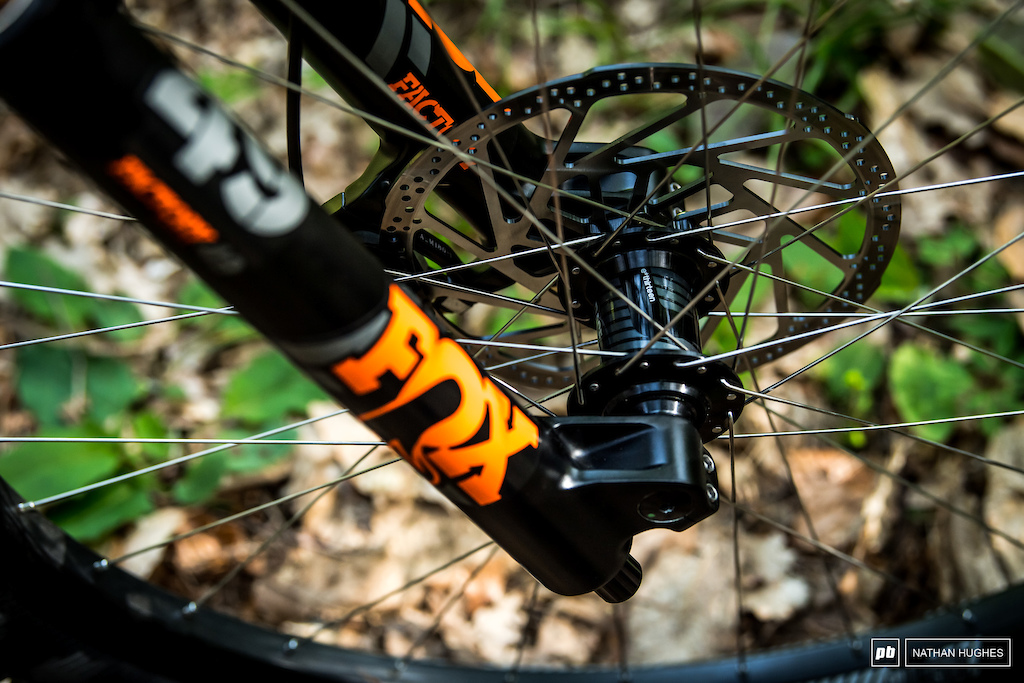 The DHR is TRP's new brake. It's TRP's e-bike brake which both Aaron and Neko were really pleased with in testing. Better feel and more power. 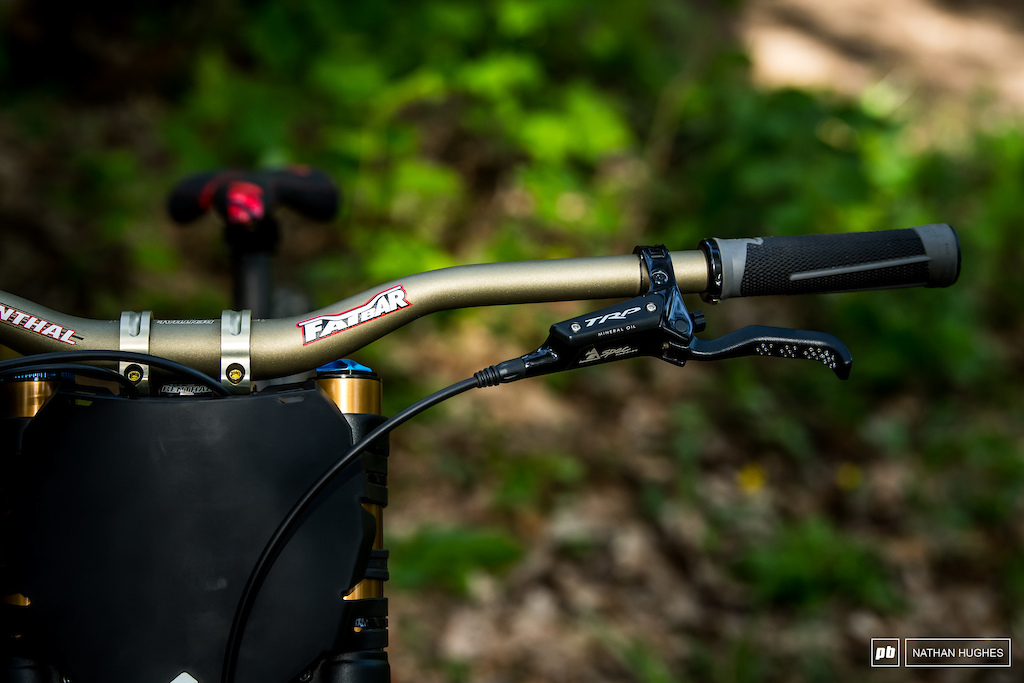 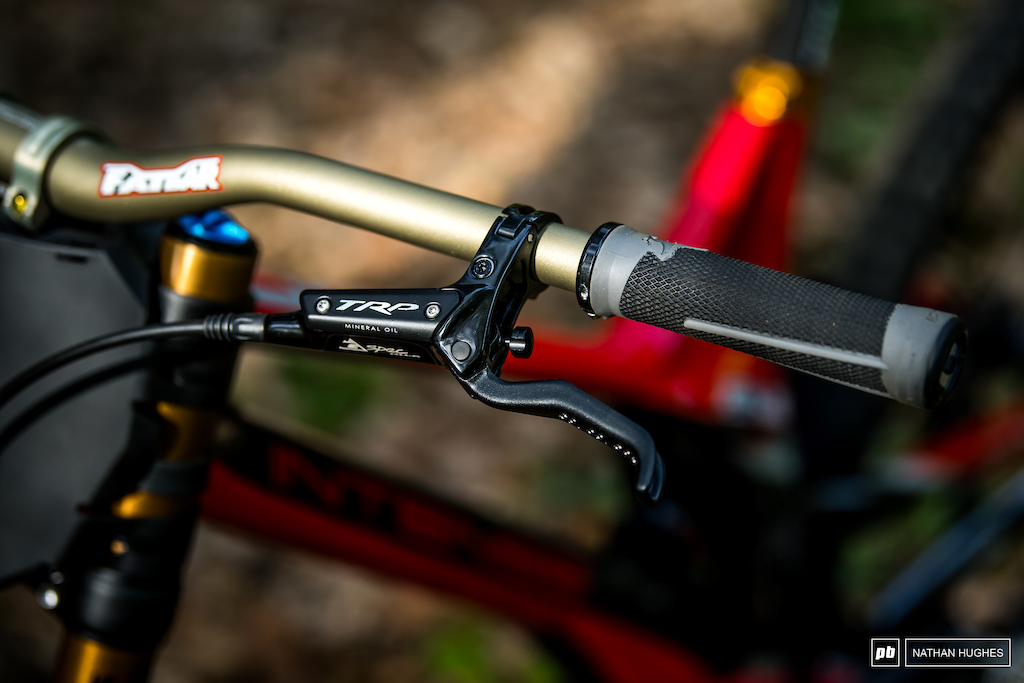 Hall drills out the dimples on the TRP brakes for Gwin. It gives a little more grip on the finger with slightly sharper edges, plus it looks good. 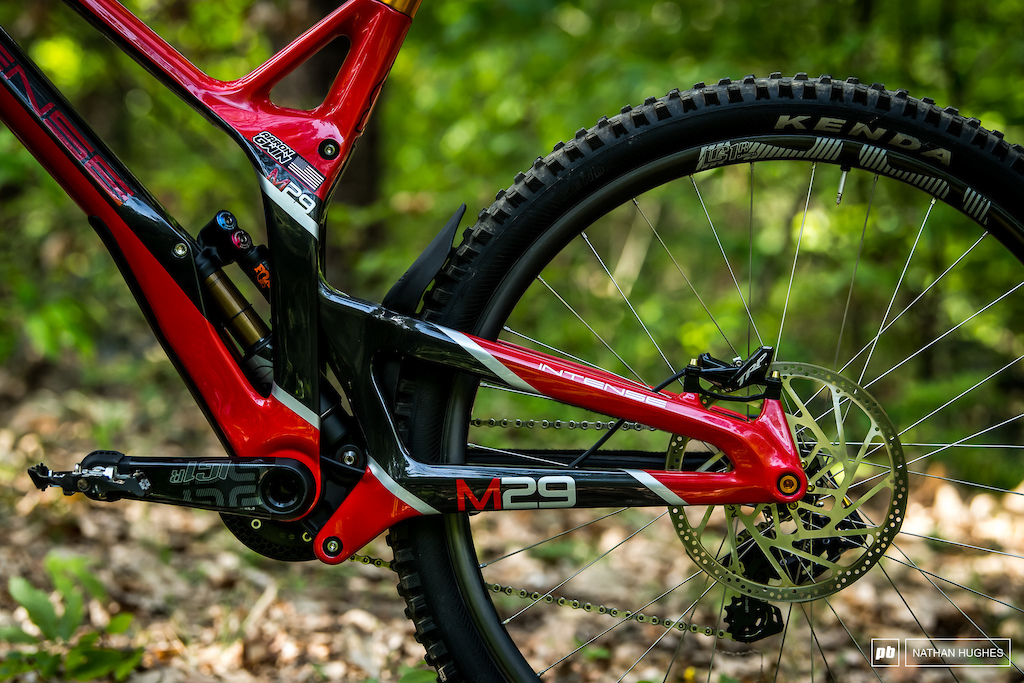 Kenda had recently launched the Hellcat when Aaron switched over from Onza. He was happy with the tires after testing them, and there are several new tread patterns in development. 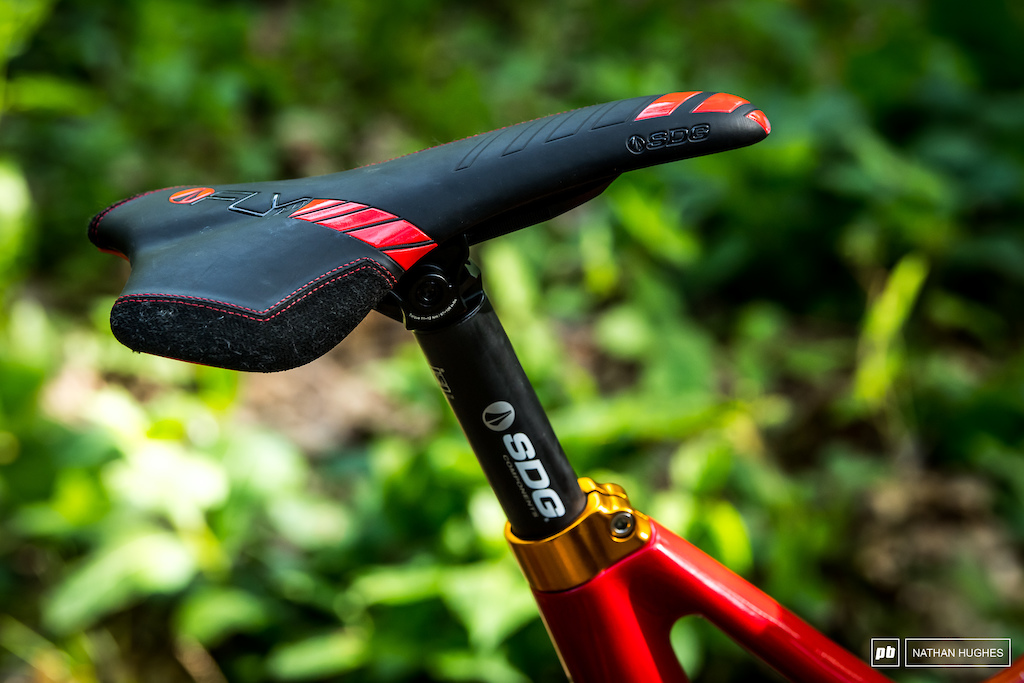 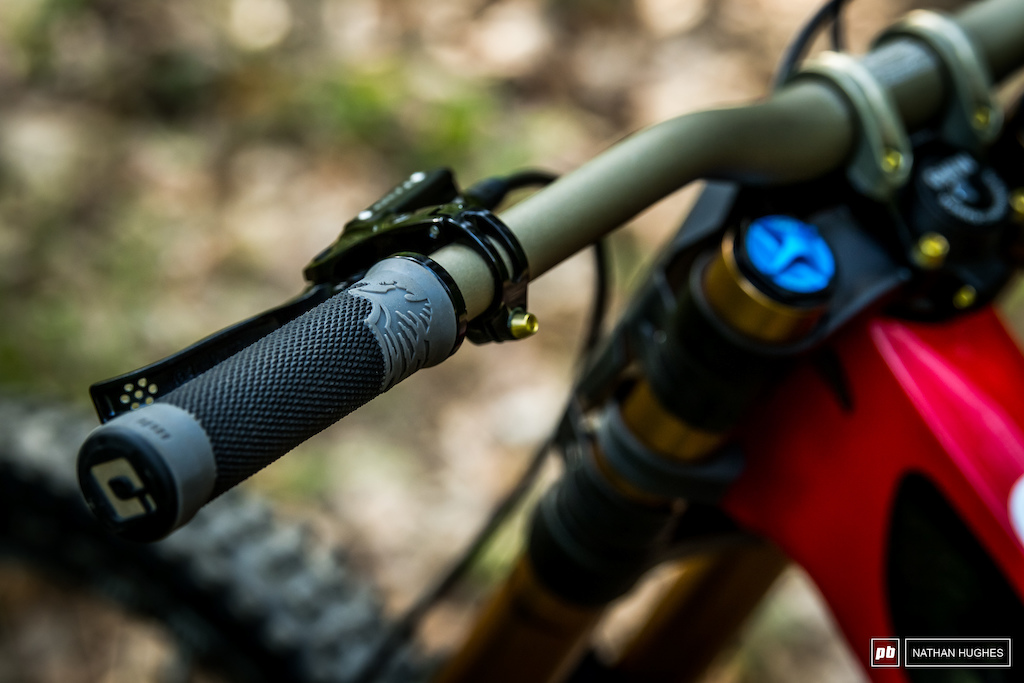 SDG handles the seat and seat post while Aaron runs his signature ODI lock on grip. 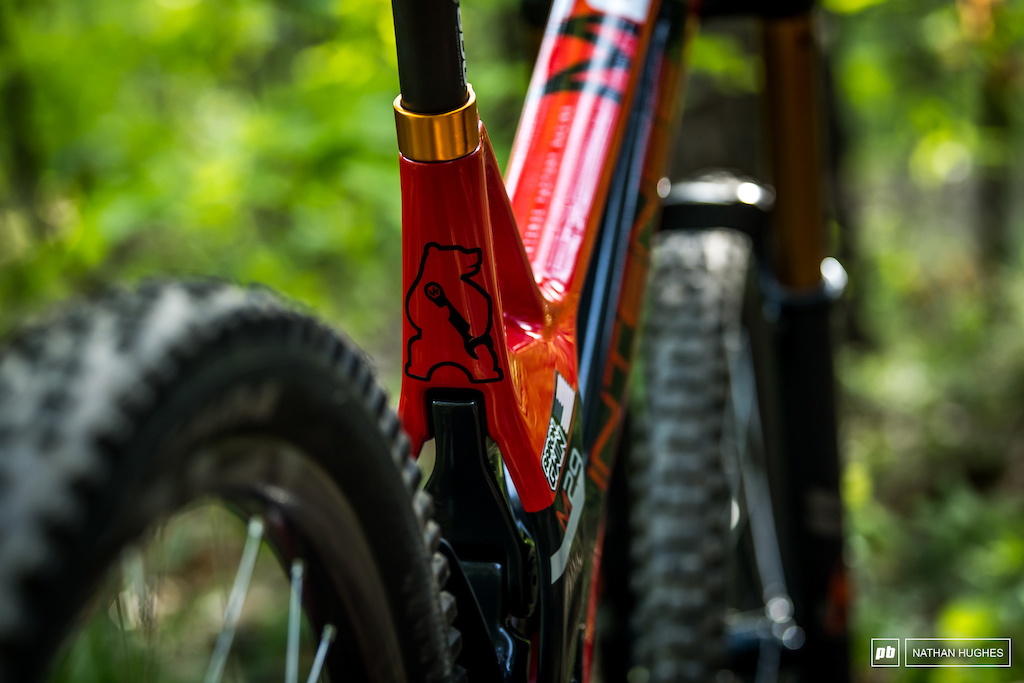 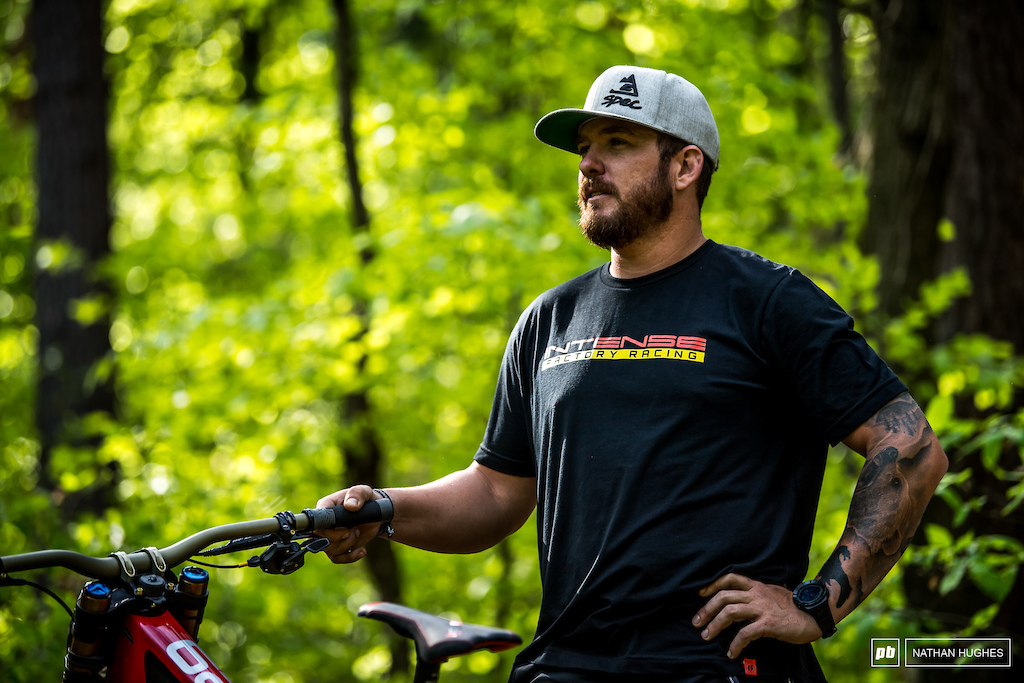 John Hall, Aaron's mechanic isn't one for disclosing many numbers on exact settings or ride height. When you're at the top of the game, it makes sense to keep your cards close. Hall's spirit animal is a bear, hence the bear with the wrench on the seat tube. If you see that logo on any bike, it's John's stamp of approval and a guarantee of a dialed ride. When the bear is there, have no cares, as there's nothing you need to worry about, whether it's Gwin's race rig or a buddy's trail bike, it's good to go. 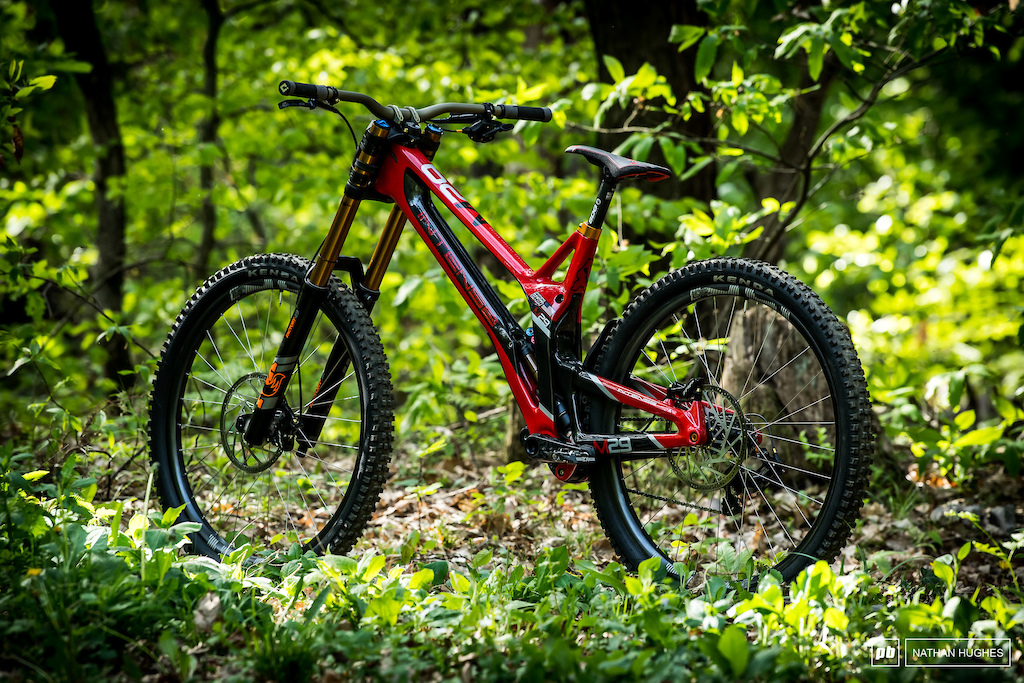 Aaron is on a stock size large frame right now but there is an XL on standby if he feels the need to run it.
MENTIONS: @intensecyclesusa / @aarongwin1

thesharkman (Apr 27, 2019 at 16:18) (Below Threshold)
No, it suggests the industry's push for longer bikes is all based on making money. The actual racers who know what they're doing aren't falling for it.

misledyouth21 (Apr 27, 2019 at 16:29)
Sizing is for the masses. Racers change out rear triangles with difference sized frames too. He was on an XL with YT also. That's just for racing though. I'd be willing to bet he doesn't ride an XL when he's not racing.

kleinblake (Apr 27, 2019 at 16:44)
@thesharkman: the xl has over a 1300mm wheelbase. Just about a solid 40mm the an xl m16. If anything this demonstrates that the industry is lagging behind. If you were right, you’d see Aaron on a smaller size, not a bigger one.

chriskneeland (Apr 27, 2019 at 18:45)
Intense has been behind the industry for years. The size XL M16 has the same reach as a medium Tues. The XL M29 is longer, but still falls into a large sizing in other brands.

QuickMish (Apr 28, 2019 at 6:24)
Dude the man comes from a motocross back ground. He is prob more comfy on a big ass bike. Remember he is not sit down pedaling either, so who cares about the reach. And if you've ever ridden a slacked out bike, downhill, you would know that longer, just eats up all kinds of terrain.

twozerosix (Apr 28, 2019 at 9:50)
@QuickMish: the familiarity with riding a much bigger machine was what I was thinking also. Gwin looks barely 5’10” if that’s what’s stated.

jeremiahwas (Apr 27, 2019 at 15:01)
"Hall drills out the dimples on the TRP brakes for Gwin. It gives a little more grip on the finger with slightly sharper edges, plus it looks good.”

nickkk (Apr 28, 2019 at 0:24)
@fclinder: it might be that he takes a little more out of the dimples compared to the casting on the production leavers which have a smoother profile, presumably from a polishing treatment. This would leave a small area around each hole with a sharper, grippier edge. A small difference but potentially an important one, similar to Hope Tech 3 levers which are drilled.

serathestaii (Apr 27, 2019 at 15:14)
Being secretive about bar height's ridiculous. Like knowing that would give anyone an advantage lol

serathestaii (Apr 27, 2019 at 17:03)
@kleinblake: Every bit of knowledge gleaned from a pro's bike is practically worthless. It's all about curiosity and gear nerdiness. Why do a bike check at all if things like bar height and tire pressure are treated like proprietary tech that's still in development?

thenotoriousmic (Apr 28, 2019 at 2:19)
Yeah it’s totally stupid and if it’s that important just make something up to put your competition off.

JamesBarton (Apr 27, 2019 at 19:01)
I love John Hall content. As a bike shop mechanic for 13 years, his habits and attitude impress me. I've even made a pelican case tool box in his style, and I've always crimped cable ends in my signature style. A sticker seems like the next logical step!

seraph (Apr 27, 2019 at 21:19)
As a bike shop mechanic for 15 years, I can honestly say I've never had enough time to develop a signature toolbox or cable crimp method. I'm way too busy working!

valhallascott (Apr 29, 2019 at 1:03)
Random fact - I designed the bear logo for John. He's a rad dude & it was super fun designing it for him.
I'm glad that the logo is finally getting out there a bit.

thenotoriousmic (Apr 28, 2019 at 2:28)
@rockyflowtbay: the alloy prototype was intense best looking bike and they’ve had some bangers. They showed they still have it instead they decided to sell cheap Chinese catalog bikes now that look like a fake eBay Santa Cruz.

Make bikes that look like this intense. We know you can do it.

iiman (Apr 28, 2019 at 3:10)
@thenotoriousmic: Came here to say the same, alloy mule was the best looking in the circuit. Even if they had switced to plastic but keeping the shapes it'd be, but no, they changed every single line :/

5poundplumbbob (Apr 29, 2019 at 6:47)
It's pretty dumb that the mechanic keeps Gwin's "ride settings and stack heights" cards close. As if anyone actually gives a shit about them.

thesharkman (Apr 27, 2019 at 16:16)
He designed the Onza the Aquila which currently has his name printed on it (both the DH and trail versions). He and Onza are most likely in a separate business deal where they license his name to print on the tire. Either way, he is sponsored by Kenda so he isn't going to be using an Onza tire.

heavyp (Apr 27, 2019 at 14:33)
If Aaron is between sizes why didn’t they just make him up a prototype in Aluminium like they were doing during the season for Jack and Dean a few years back ? I thought part of the idea behind the Intense move/buy/manage thing was its close to home and they can R&D things super quick ?

oneheckler (Apr 27, 2019 at 15:26)
Ride height secrets,that is the most stupid (and a phew others like that )that I heard,like the rest don’t do try outs.that is just for the rest that don’t have the time of money to try different set ups,we just ride no matter what and sometimes do spend some time on set up ,not to mention suspension cause that is something that we try ,and sometimes really we should not have done that ,really

urbanacheiver (Apr 27, 2019 at 16:25)
Ok I’m gonna get it started here. First, I should mention I rode a 6.6 for four years back when it came out and it was the best time I’ve ever had on a bike. That said, does anyone but me think it’s lame that Intense names their bikes after automatic weapons, bombs, snipers etc? Not trying to be PC, it’s more like as an adult I’m just don’t respond to a branding strategy that seems designed to appeal to 10 year old boys who play with GI Joes. Not seeing the connection between our sport and military grade weapons anyway. Someone enlighten me.

SangamonTaylor (Apr 27, 2019 at 18:36)
Sure it’s a bit over the top (one might even say it’s a little... intense) but honestly it makes more sense than most other company’s naming schemes. If you didn’t already know, would you be able to guess the functions of a Fuel vs Remedy vs Slash vs Session? I’d argue probably not. But to everyone who grew up playing army men, Sniper vs Carbine vs M16 (ok, M29), it’s petty obvious which ones are heavier duty.

Session603 (Apr 27, 2019 at 20:13)
Worry less about branding strategy and buy the bike that best fits your needs. If an Intense bike is the best fit for your intentions but you don't want to buy it because the of it's name then quit mountain biking and spleen punch your mother for raising a coward.

seraph (Apr 27, 2019 at 21:22)
A guy from Kona once told me that they used to make bikes called the Sex 1 and Sex 2, but when they changed the names of the bikes to Stab and Chute, they instantly sold better. Violence sells, man.