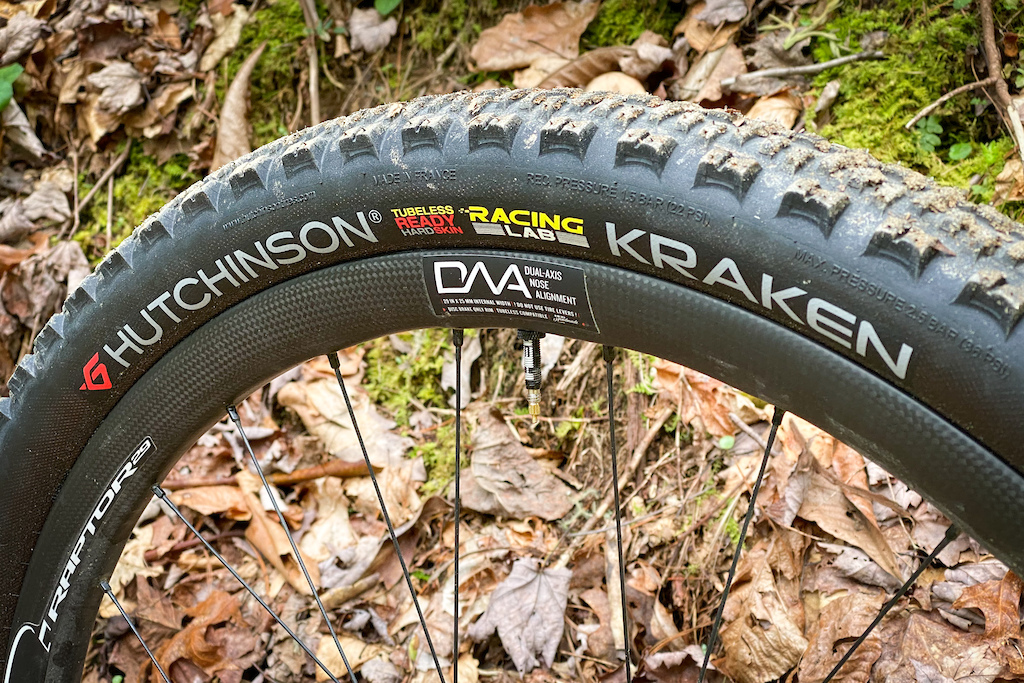 Hutchinson have been making bicycle tires in their Chalette-Sur-Loing, France, factory for a long time now, since 1890 to be exact. Last year, we saw the introduction of their new Griffus enduro tires, part of their "Racing Lab" program and now they're releasing their Kraken, an XC / trail tire designed with versatility in mind.

The Kraken is designed to be a complementary tire to Hutchinson's Skeleton tire, with the Kraken being used in the front, although it can be used as a rear tire as well. The tire is available in a 29" x 2.3" size with two different casing options, a lightweight 127 TPI and a more versatile 66 TPI. The sidewalls utilize Hutchinson's Hardskin reinforcement and the tires sell for $79.99 USD.
Hutchinson Kraken Details

• Intended use: XC/Trail
• Best for dry, mixed, rocky, or wet conditions
• Wheel size: 29"
• Width: 2.3"
• Hardskin casing reinforcement
• Tubeless ready
• Made in France
• Weight: 127 TPI - 700g (claimed); 66 TPI - 781g (actual)
• MSRP: $79.99 USD
• www.hutchinsontires.us
So, what's a Kraken? A quick Wikipedia search returns that it's a "legendary cephalopod-like sea monster of gigantic size in Scandinavian folklore. According to the Norse sagas, the Kraken dwells off the coasts of Norway and Greenland and terrorizes nearby sailors." For our purposes, it's an XC tire but, it sounds aggressive to me. 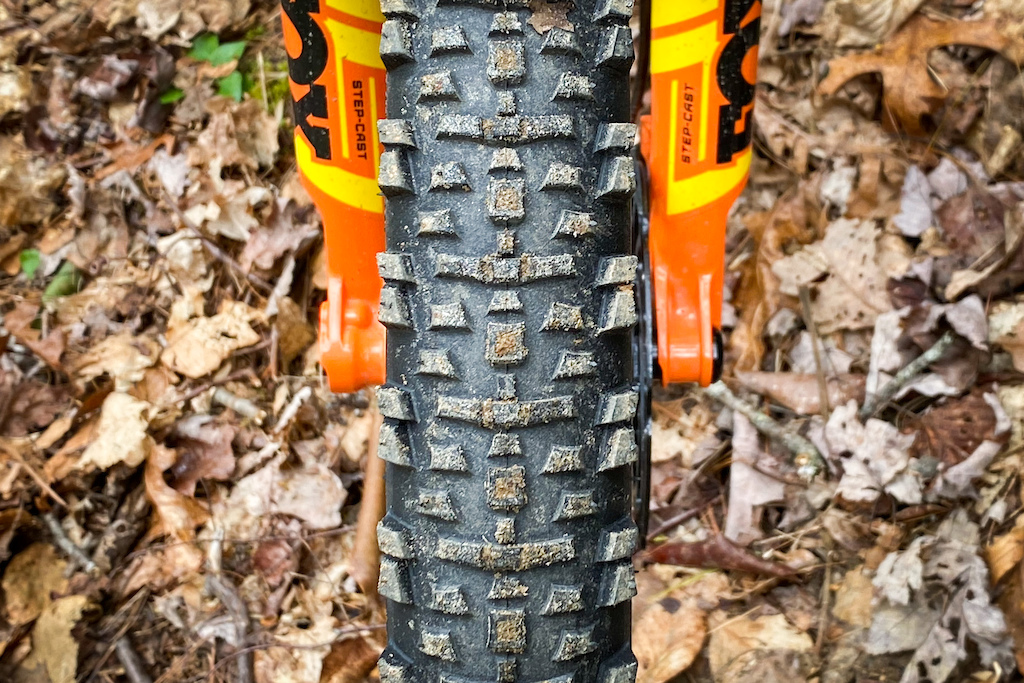 Hutchinson's goal in developing the Kraken was to create a fast and reassuring tire with tall knobs to give more confidence in rough terrain. The tire has a larger volume to give more traction and allow riding with lower pressures. While the tread has been inspired by the Skeleton with its chevron shape, its overall design has been modified to improve traction, braking, and versatility. The knobs are higher and with more volume and the chevron has been opened up when comparing to the Skeleton.

The side knobs of the tire are based on Hutchinson's Cobra but taller, to aid in cornering. They draw from the Griffus 2.5 and are linked in pairs, with buttresses running down the sidewall of the tire to strengthen the structure of the tire when being pushed hard into turns. The smaller intermediate knobs are distributed slightly further apart than the ones on the center of the tread. Referencing the sea monster from folklore, Hutchinson claim the knobs are made to work like suction cups on tentacles with the height, positioning, and shape reflecting that. The placement of the knobs is also claimed to improve puncture protection. 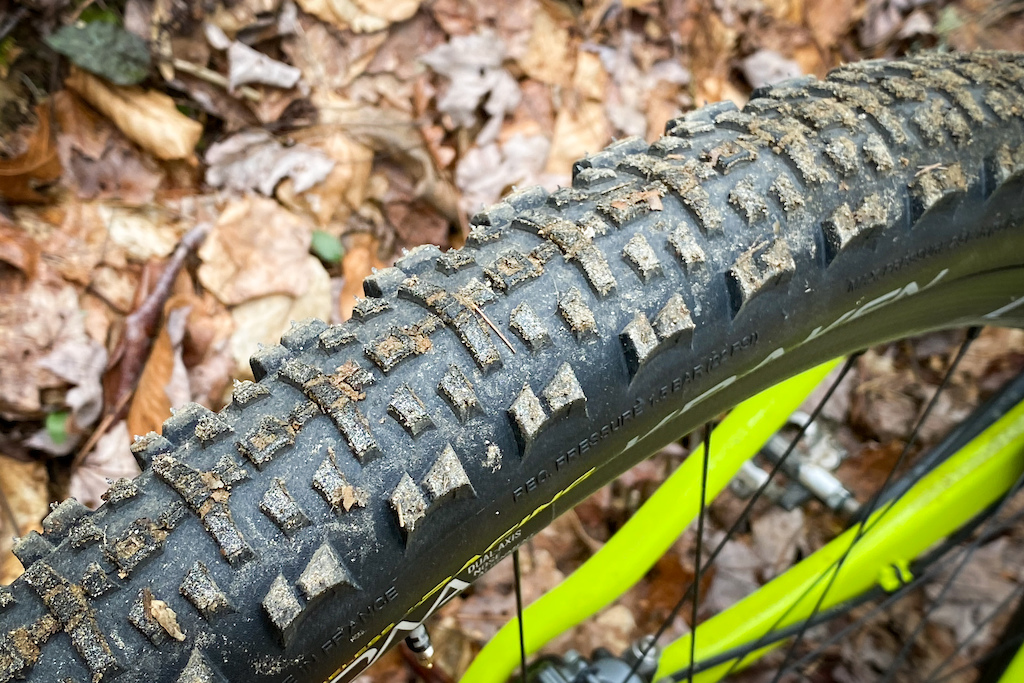 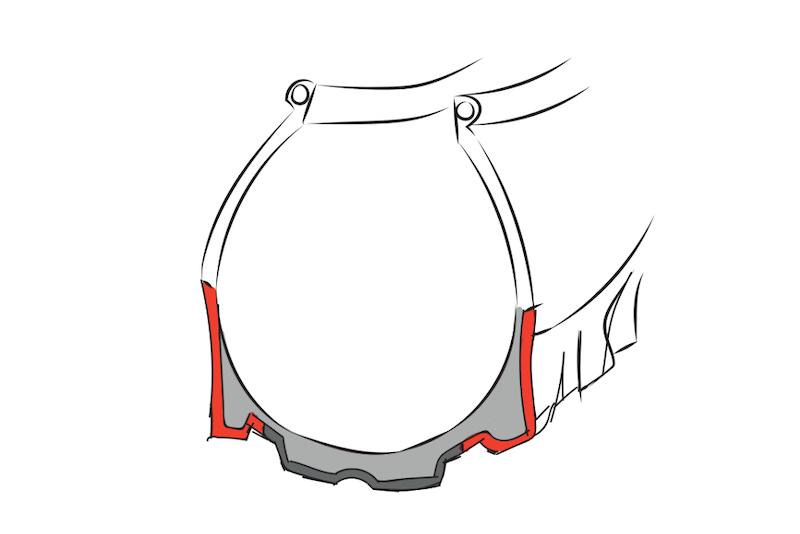 There are three rubber compounds used in the tire tread. The base is a harder 65 ShA, the side knobs are 50 ShA, and the center is 60 ShA. 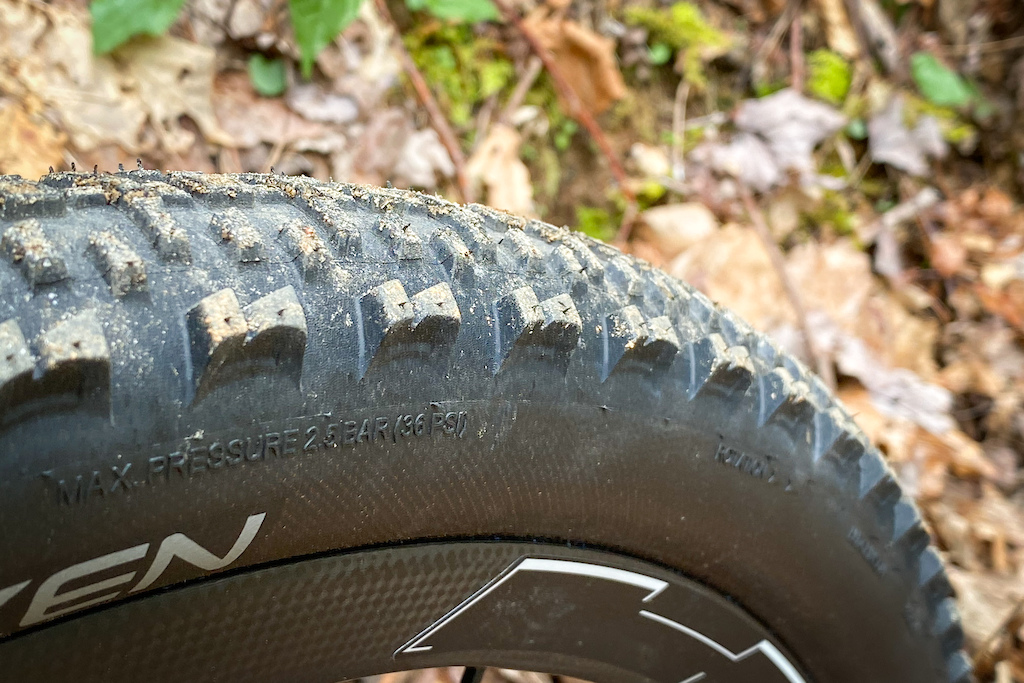 With 22psi in the front and 23 in the back tire I found that I had ample traction in a variety of conditions, ranging from dry and dusty to rainy, with lots of optimal dirt in-between.

The tires roll well and are predictable. Cornering traction is excellent (for an XC tire) with the taller knobs providing plenty of support. For a trail bike, I would consider the air pressures I was running to be on the low side but, for an XC bike, they are bit higher than I would typically run. The casing is soft and supple enough to allow the higher pressures without losing traction or control on the trail.

The profile of the tire is round, but the side knobs do square it off. Transitioning from the center to the side is smooth and I never felt a dead spot in traction. It makes them predictable and they don't take a lot of thought or too much input to seek out traction in varying conditions on varying terrain. If we were going to compare it to a comparable tire, it's a slightly more aggressive take on the Maxxis Ardent Race with taller side knobs.

I haven't had nearly enough time on the tires yet to comment on their long-term durability, but the one nag I do have is that the tires were more challenging to set up than many other tires I've mounted recently. I ended up having to fire up the air compressor to get a large blast of air in for both the front and rear. The fit is loose enough that even a higher volume floor pump didn't stand a chance.

For a versatile XC tire, it seems that Hutchinson created a solid option with the Kraken. The tire seems as if it would be equally appropriate for an all-day epic in the woods as it would for an XC race where traction is critical and it's a good tire for Hutchinson to have in their line.

Visit the gallery for more images from this article.

WAKIdesigns (Apr 21, 2020 at 1:16)
@JohanG: Yeah the Edge 22 went full Minion, it has minions side knobs even in the center. Then they made a giant channel in the middle. Guess how that went. Tioga MTB tire division has always seemed to be made of folks who got kicked out from Kenda or Continental for being too whacky. And that says a thing or two.

GuerrillaGravity (Apr 21, 2020 at 9:13)
Ironically, Maxxis had a Kraken in their lineup at the turn of the century, right about the time the Minion lineup also appeared.
www.mtbr.com/product/tires-and-wheels/tire/maxxis/kraken.html

WAKIdesigns (Apr 21, 2020 at 9:59)
@GuerrillaGravity: Of all tires of old... the Continental Diesel. That was the only knobby tire in history that had less grip than a slick

JohanG (Apr 21, 2020 at 21:00)
@WAKIdesigns: The Tioga tires have different edge knobs. The smaller inner portion is on the backward side vs the Minion. they're also so heavily siped they're almost two knobs. This is obvious to anyone who has examined the tire, a group that doesn't include you.

JohanG (Apr 21, 2020 at 21:01)
@GuerrillaGravity: That is funny. Reminds me of how the new Conti Mountain King is a Farmer John tire with shorter tread.

slimjim1 (Apr 23, 2020 at 5:55)
@WAKIdesigns: How do you get so much time to test out all these tyres when you spend so much time talking absolute shit on PB?

WAKIdesigns (Apr 23, 2020 at 7:23)
@slimjim1: I spent way too much cash on being open minded and testing tires other than Minion DHF and DHR2. None of them but MMary / SE4/ Assegai that is alternating 2/3 center pattern with meaty side knobs worked out... so sorry, after some time people like me can almost instantly see whether some tire makes sense or not. And please don't tell me it works well on rear, because almost anything works on the rear. Please be open minded and buy questionable alternative designs which aren't even cheap. You'll get there.

zede (Apr 20, 2020 at 12:21)
"Best for dry, mixed, rocky, or wet condition" right. And if they were selling a jacket, it would work best for wintersports, running, Sahara trekking and surfing ?

nematon785 (Apr 20, 2020 at 16:48)
Looks like typical rear tire after retirement. center knobs pre worn. Have some cts tires on my beater that were 12 dollars each. Held sealant for years. Still using today, 3 bikes later. Gawd help you in a hard berm layed over. Traction blows...

HerrDoctorSloth (Apr 20, 2020 at 15:07)
This is exactly what I have been wanting since I first got my Hutchinson Skeletons! Strange that these are so heavy, even compared to the Gila, which is a lightweight Cougar... but this will roll sooooooo much better. Hutchinson quality really is on another level, and most definitely worth the premium price. I have been a Hutchinson fanboy for 23 years because of the quality and performance: reasonsAF

IllestT (Apr 20, 2020 at 10:56)
I have a question about mtb tyres in general:
In terms of numbers sold, there seems to be Maxxis, Schwalbe... and then everyone else.
Maxxis and Schwalbe clearly do far more marketing than any other brand, so my question is this - why aren't the other brands far cheaper?
Because I don't see why anyone would consider buying other brands

Muckal (Apr 20, 2020 at 11:20)
Schwalbe and Maxxis have are huge in the OEM market which means lots of tires sold. Economy of scale.
Why aren't others cheaper? Or tires in general? I guess because people will happily pay the price of a car tire for a bit of rubber and fabric.

darkside720 (Apr 20, 2020 at 11:50)
They are. The Griffus retails at £44 iirc, that is a good chunk cheaper than the equivalent Minion Exo plus. Also the construction quality is a noticeable step up.

nfontanella (Apr 20, 2020 at 13:00)
@Muckal: it's a little silly to compare it to car tire prices, you can get race worthy tires for you bike for less than $100 a piece. Race ready car tires are insanely expensive

GBeard (Apr 20, 2020 at 13:47)
Maybe they factor in opportunity cost of using the machine doing the molding. Like for example if they were to mold another type of tire in the same machine they could be making X amount of money. Therefore a mountain bike tire needs to make at least X for them or they are wasting their time. I don’t know but maybe somebody here does.

oxentiel (Apr 20, 2020 at 14:07)
There's also a thing about Hutchinson : most of their tyres are made in France in their own factory (entry-level tyres are still made somewhere in asia). It's probably a bit more expensive than producing them in a big factory in Taïwan next to the Maxxis and the Vittoria assembly lines.

Alexh1983 (Apr 20, 2020 at 22:47)
It depends by the use and the region, in roadbike and gravel here in Italy Vittoria has almost 90% of the market. Also a big slice in xc and trail. If you go to the shop it's easy to find these tires at a right price (around €35 each) and they're good tires. Normally I buy maxxis exo tr dual compound at a decent price online, but in shops these are much expensive than Vittoria. I ended up with one maxxis mtb and a mtb and a gravel with Vittoria. Hutchinson almost not findable in shops here.

Muckal (Apr 20, 2020 at 23:35)
@nfontanella: ok. That would be a valid argument if people used the tires to race on. However most people ride for recreation purposes and would be fine on rock hard tires that last a lifetime, like, for comparisons sake, regular car tires.

That was $250 USD tires gone in 1 hour of driving. I went a full season of racing on my XC bike with one set of tires, then the bike was stolen (I race XC with a Pro license, albeit, very slow). Still want to compare cheap car tires to mountain bike tires?

4thflowkage (Apr 22, 2020 at 14:16)
WTB's classification scheme is far easier to figure out that Maxxis or Schwalbe. They also offer things Maxxis and Shwalbe don't such as the DH casing Iudge in a fast rolling compound. If you want a DH casing Magic Mary, you have to get the Ultra Soft.

OnkleJoachim (Apr 20, 2020 at 11:20)
Finally a tire to go with the branded socks I got for free when I got a bottle of Kraken black spiced rum

mountaincross (Apr 21, 2020 at 5:43)
Go ahead, release the Kraken. My Rock Razor nuclear option will teach unruly and disrespectful humans a lesson they will never forget.

Great review, but I think it would add a lot of value if you could make some direct comparisons to other benchmark xc tires.