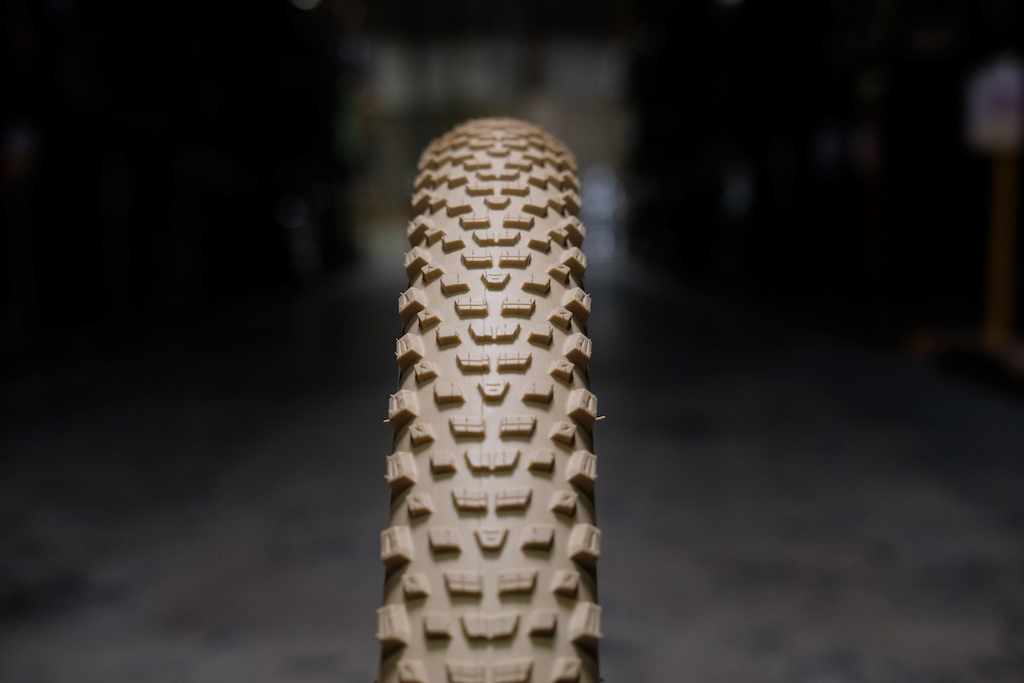 Kenda has released two new tires, the 3-Sixty and Booster. Both are 26" tires engineered specifically for pump tracks, slalom, dirt jumping, and bike park style riding. Kenda says that both of the tires had large amounts of input and testing from athletes, including Kyle Strait and Austin "Bubba" Warren.

The 3-Sixty is designed as a pump track and dirt jump tire. The spider-like lug pattern, with its low tread depth, is said to help the tire roll extremely fast, and the raised shoulders assist with cornering. The tire is available in two different compounds, black and tan, with the black being grippier and tan being faster rolling. Both versions utilize a 120 TPI casing and are available in a 26" x 2.25" size. Weights are 598-grams for the tan and 583-grams for the black (claimed). The tire is also tubeless-ready and sells for $59.95 USD.

According to Warren, the tire is extremely versatile, being able to run it on everything from dirt jumps to hardpack dual slalom tracks. He says the tire corners faster than the Kenda Small Block Eight, and that it doesn't roll over as much during cornering. 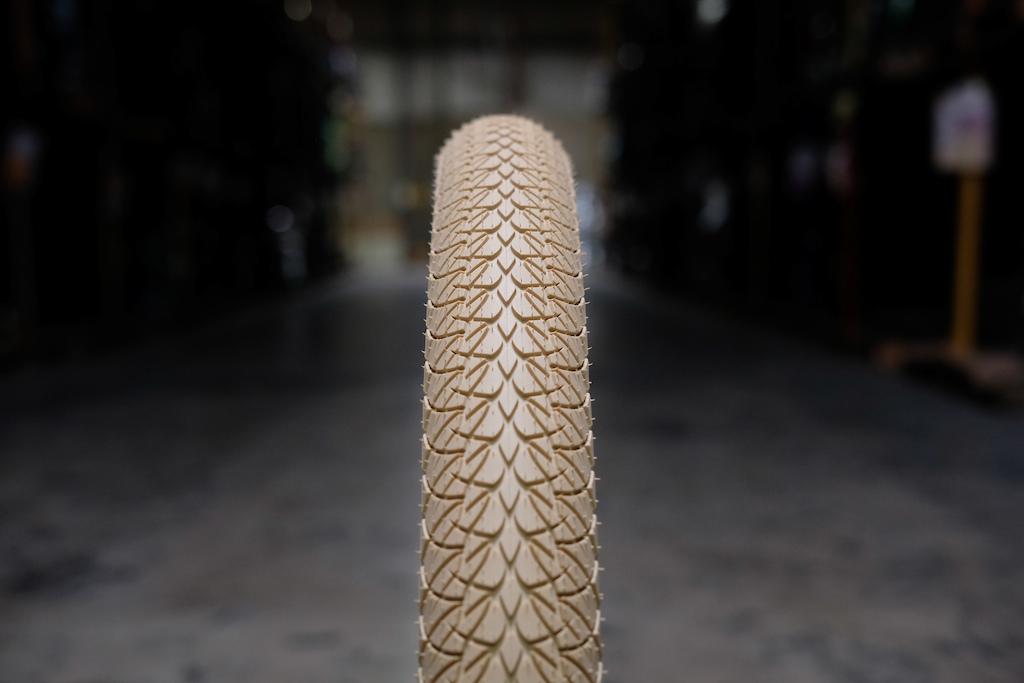 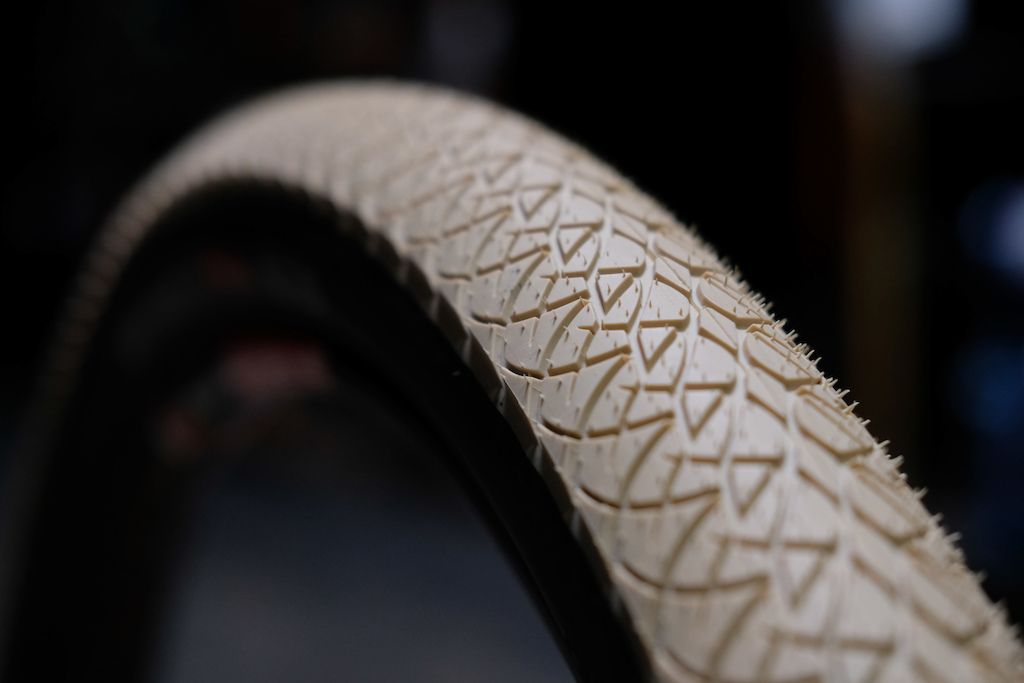 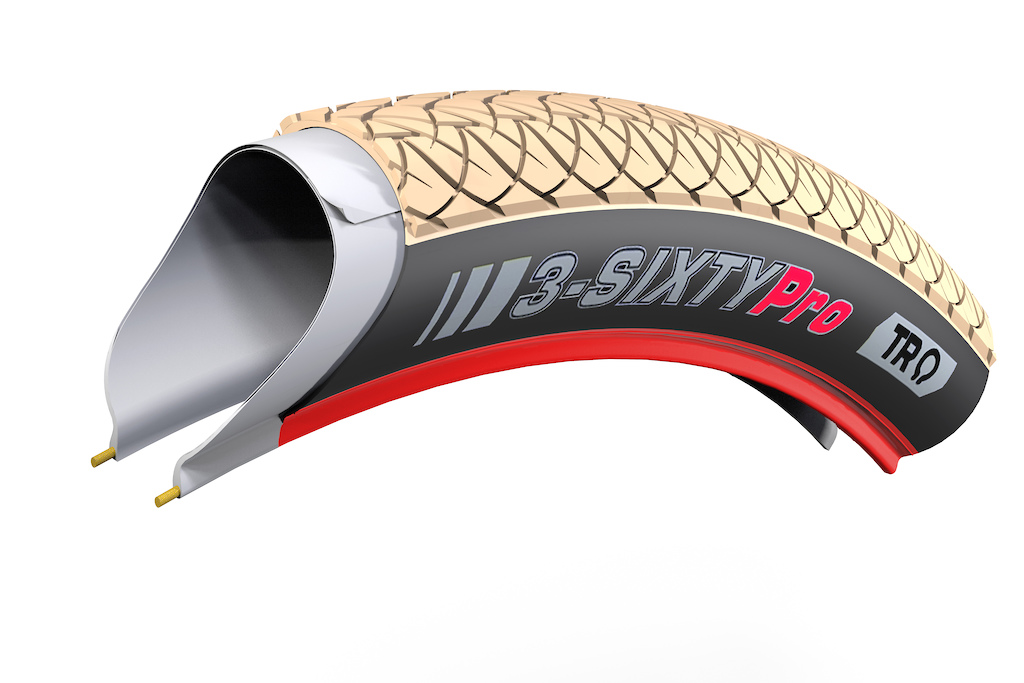 The Booster is the more versatile of the two new tires, having more tread, and is made for dual slalom, dirt jumping, and bike parks. The tread expands on Kenda's Booster cross-country tire and is available in all three wheel sizes, including a 26" diameter. Like the 3-Sixty, the new 26" Booster has two different rubber compounds - black or tan. While the tire is geared towards slalom and bike park, Warren says he'll even use it for A-Line style events. 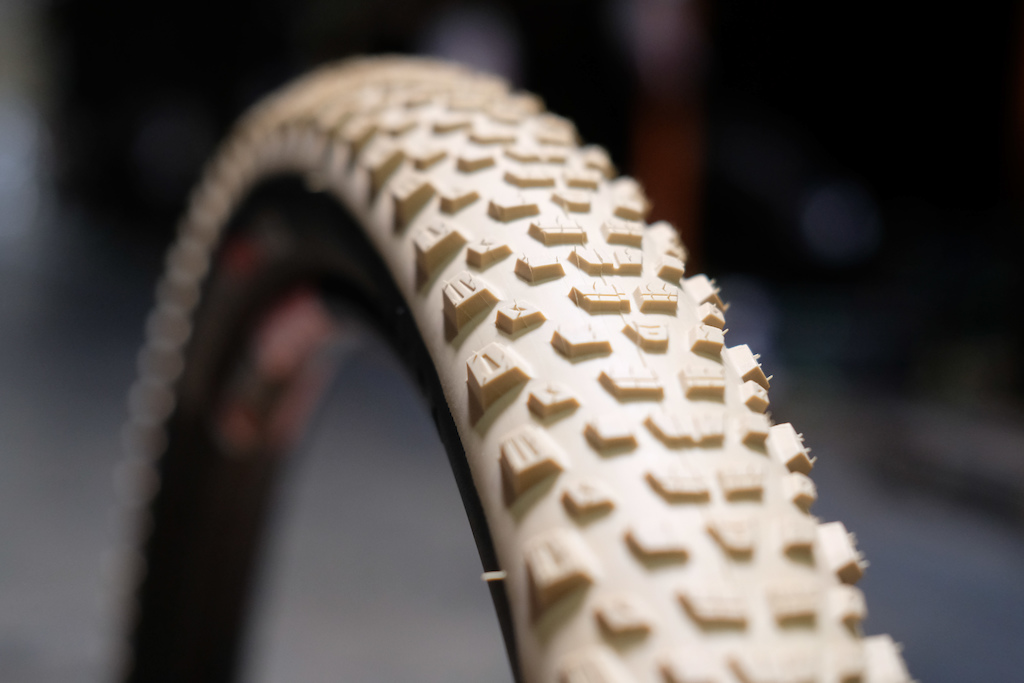 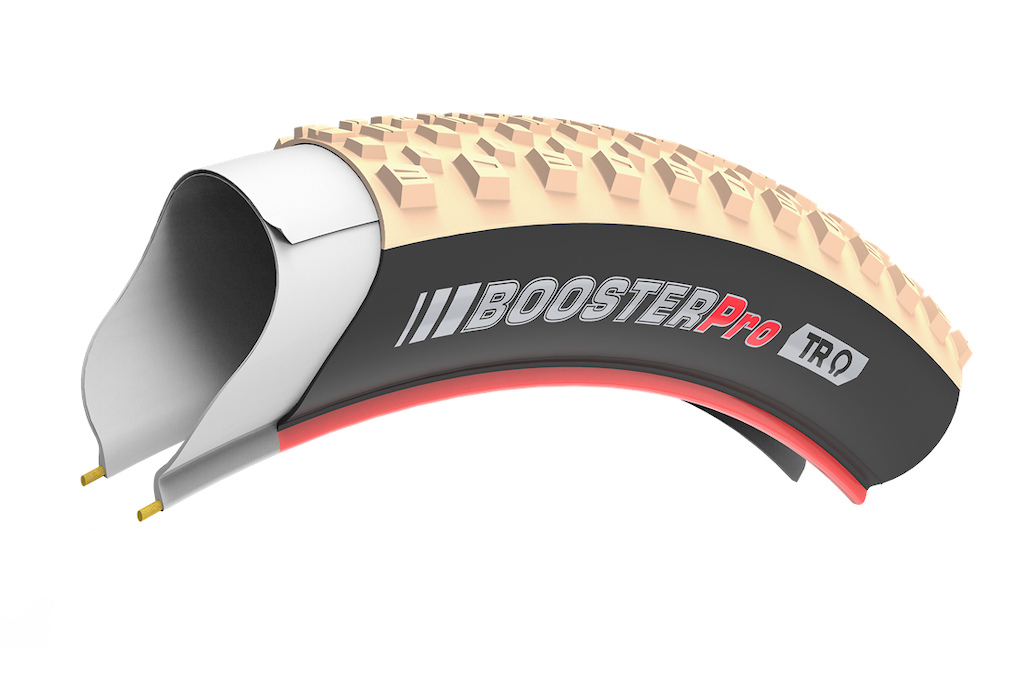 You probably missed that Pinkbike poll from a couple weeks ago then......

BISCUITSFORSMUT (Apr 23, 2020 at 10:51)
Good, glad companies are supporting part of the sport that seems overlooked these days

filmdrew (Apr 23, 2020 at 11:04)
Looks like it! I run IKONS for most trail riding (and slalom) and I go fasssst. Seems like a lot of people out there are over-tired (ie: over forked)... and could benefit from a less aggressive tire like the Booster. Def going to look into these new Kendas. Like the color too

BamaBiscuits (Apr 23, 2020 at 12:41)
@filmdrew: errybody be thinkin they gotta have a DHF. When in a lot of cases they’d be goin faster on a Forecaster/Rekon/Ikon

Thirty3 (Apr 23, 2020 at 14:12)
I had Minions and Aggressors and yeah, grip till the end of time but dang they were slow rolling and heavy. The Agarros are very fast and grippy, but not terribly light at about 960 per tire. But they are for me light years better then the Minions for my riding. Ditto with the Boosters great tires for twisty singletrack, trail riding.

Avanwin (Apr 23, 2020 at 15:03)
@Thirty3: Yeah, I had DHF/ Agressor set up on my trail bike and I agree 100%. Endless grip but heavy and slow. I have some XC tires on there now since the lockdown has me relegated to mostly fire roads. I was blown away at how much faster rolling the Conti Xkings are. The rear end gets squirmy and drifty when I push it hard in a corner so I would like something in between... like a trail tire! lol. Might try the E13 trail tires soon.

optimumnotmaximum (Apr 24, 2020 at 0:14)
@filmdrew: Around here the dirt gets extremely hardpacky in summer ( or even right now), on top of this there is always some loose sand or dirt. I tried an aggressor /ikon combo last year and while it is fast it also is sketchy AF. The sidewalls of the icon are made of paper, there is very low damping and braking traction on soil mentioned above is non existent. In my opinion, even on mellow tracks, you should at least run something like the minion dhr 2 exo maxxterra 2.3 on the front (and an agressor on the rear) if you like to descend fast. It rolls ok and you can actually attack.

Jamestyrrell (Apr 23, 2020 at 14:58)
FINALLY, wish more companies (especially BMX ones) would realise that quite a lot of people actually ride dirt jump bikes at skatepark these days. And we all pretty much run maxxis DTH

BikesNBites (Apr 24, 2020 at 6:02)
been using the Kenda Booster on a single speed 29er fully rigid bike I built.. 29 x 2.6 damn good tires.. never slip or spin ouf with my awesome climbing skills and leg power, tires are beefy enough to absorb most of the chattery pumps

Kramz (Apr 24, 2020 at 12:56)
Kenda K-Rads are radical to be honest (way to name the tire by the way). The amount of loose traction I need without an insane amount of rolling resistance, for riding on hard surfaces, which I end up doing a lot unfortunately. If you ride on multiple surfaces, but find yourself on asphalt, or hard trails a lot, they are perfect.

takeiteasyridehard (Apr 23, 2020 at 17:18)
@noisette: I've been hunting for a living pine tree that doesnt produce pinecones. I want to plan one in my yard. Let me know if you find one.


On a serious note...my wife works at a tree farm. She gets that question far too often from people who let's just say have questionable political views. Oh and pine trees that dont drop pine needles, can I get one of those too? Or a tree that doesn't require any water. It boggles my mind how stupid trump supporters are....

Jokingly, she has considered saying - yes we have a 3d printer, let me go make one for you.

WAKIdesigns (Apr 24, 2020 at 3:08)
@takeiteasyridehard: I love it how you slipped in with Trump into this. Comment boards with 26" stuff should be politics free. Because we ride these things because we outsiders. We should be united, telling people who don't have DJs or BMXes they are losers with no skills and no style. Everything below 27,5 - politics free! And no fkng fixies!!!

Somoene made no waki filter, there should be no Trump filter.

Warburrito (Apr 23, 2020 at 12:10)
What model number? Looks like the design changed a lot over the years. Looks like China and Taiwan are still selling knock offs of the old ones.

takeiteasyridehard (Apr 23, 2020 at 10:59)
Except the tires you referenced kind of suck for anything other than bluegroove bmx racing and xc(in my opinion). Even though kendra rubber tends not to impress me, I have been wanting to replace the maxxis Larsen TT on the front of my DJ, and haven't found anything I like better or even close to as well(yes I tried the crossmark). This new short knobby tire looks interesting to me...

filmdrew (Apr 23, 2020 at 11:06)
@takeiteasyridehard: It's probably up to the type of dirt you have at your disposal; I've done all of Santa Cruz on Ikons since 2016. Hardpack with loose redwood fibers on top.

WAKIdesigns (Apr 23, 2020 at 11:24)
@takeiteasyridehard: try Bontrager XR2 if you need Larsen TT level of bite. Quite frankly I don’t have any clue how’s that booster better than Small Block 8. Our local DJers ride DTH 2.1. They are easily in Swedish top 20 so it’s not that bad. Many Conti Race King around as well. I’ll be trying speed kings now.

HaggeredShins (Apr 23, 2020 at 15:12)
@WAKIdesigns: I had the same reaction to both of these, I didn't realize the SB8 needed replacing (just need better sidewalls that don't tear at 60+ psi)