Raffle for a Cause: Neko Mulally's World Champs Bike is for the Kids 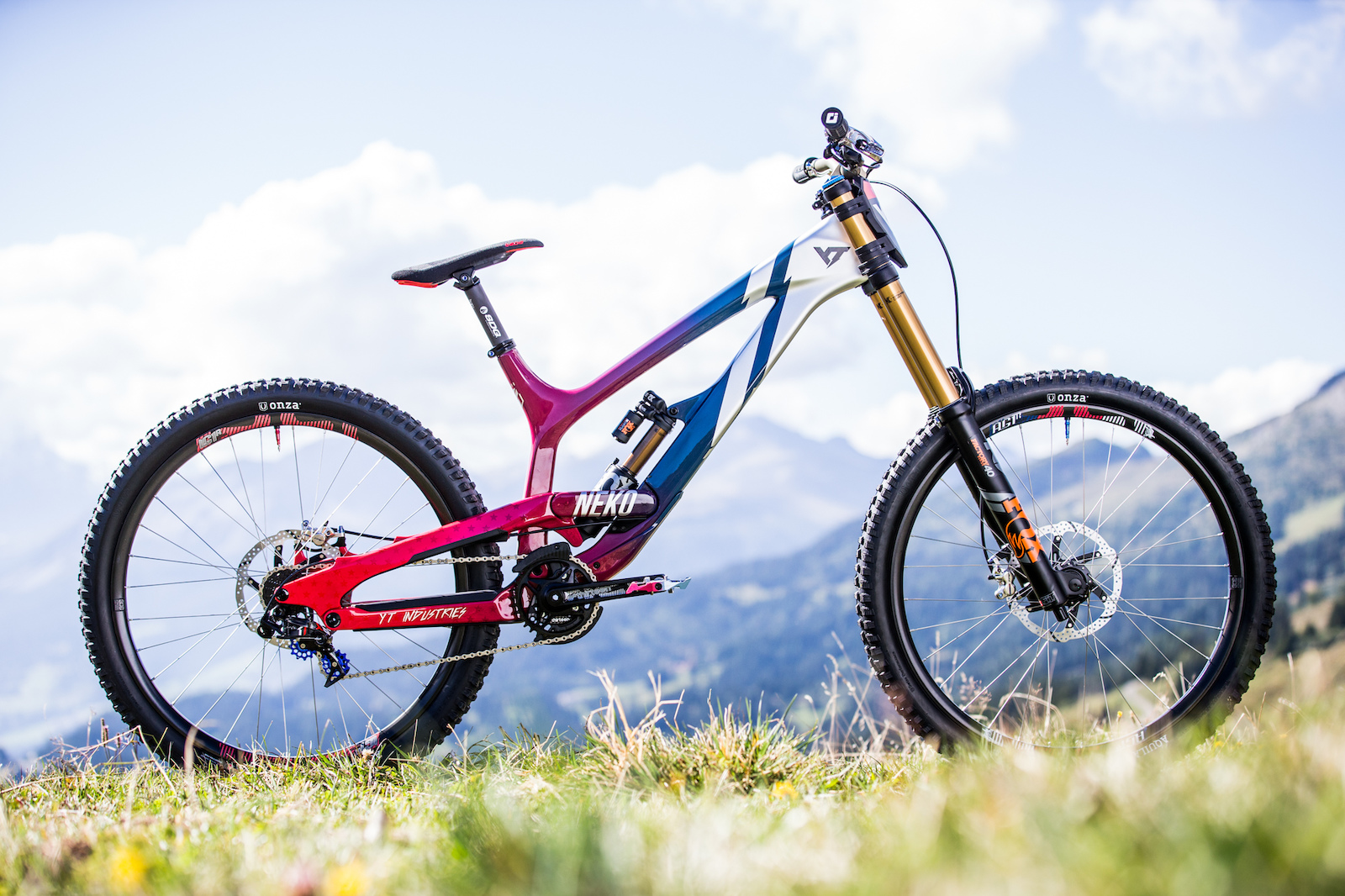 Another World Champs have come and gone. With it, we saw some incredible bikes and kit, created one off just for the race. Some of the bikes were surely broken, others will stay with the racers or teams as a keepsake... maybe finding their way into a bike shop or other prominent place, while other racers may end up selling their rides or donating them to a good cause.

Neko Mulally has teamed up with Can'd Aid to do some good with his race bike and kit. When he found out he wasn't going to be able to race Worlds this year due to an injury, he decided that a good way to help out would be to give people the opportunity to end up with a new World Champs ready DH bike, his kit, or custom helmet while raising support and awareness for an organization he believes in and is a part of, Can'd Aid's Treads + Trails program. Can'd Aid is an organization that spun off of Oskar Blues Brewery and was started by some of their former employees as a response to the flooding near Longmont, CO in 2013. The organization donates canned water to communities hit by disasters and has a few other programs including Treads + Trails. 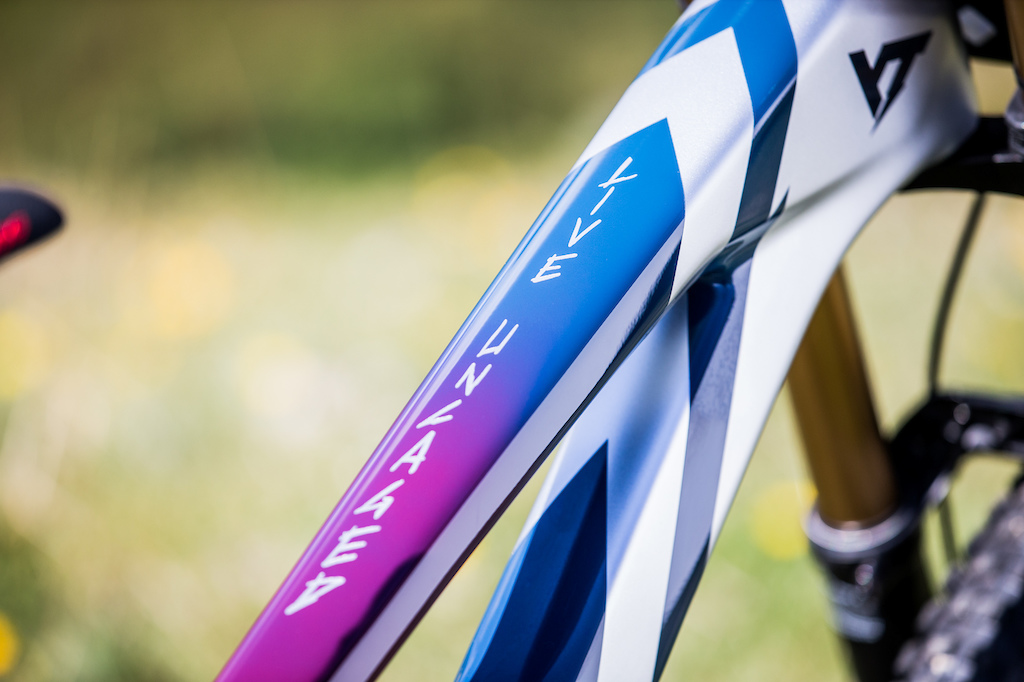 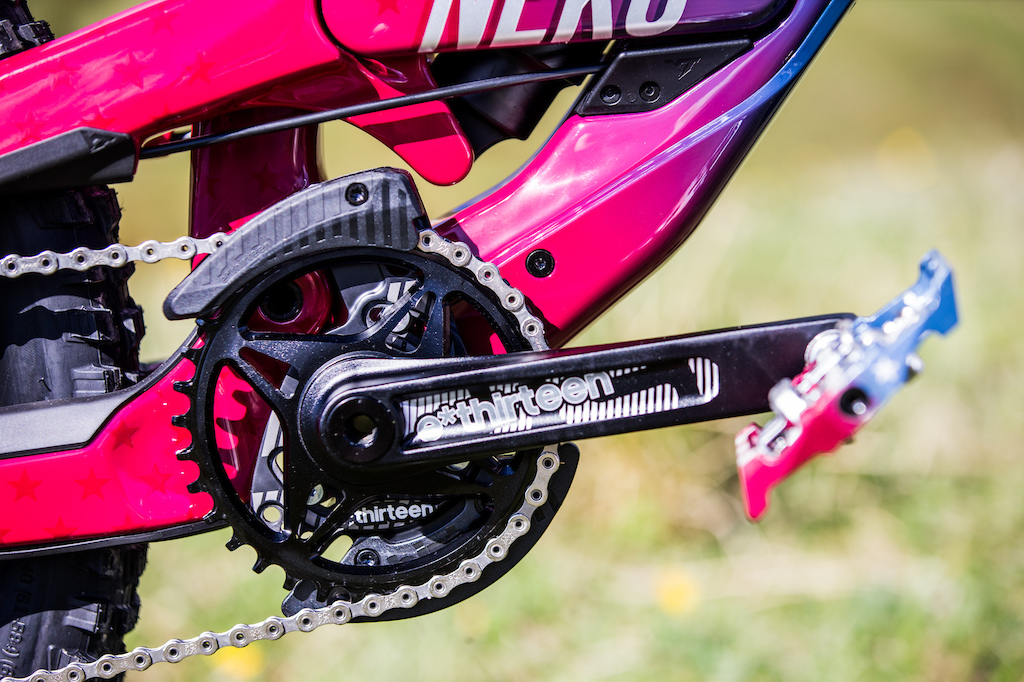 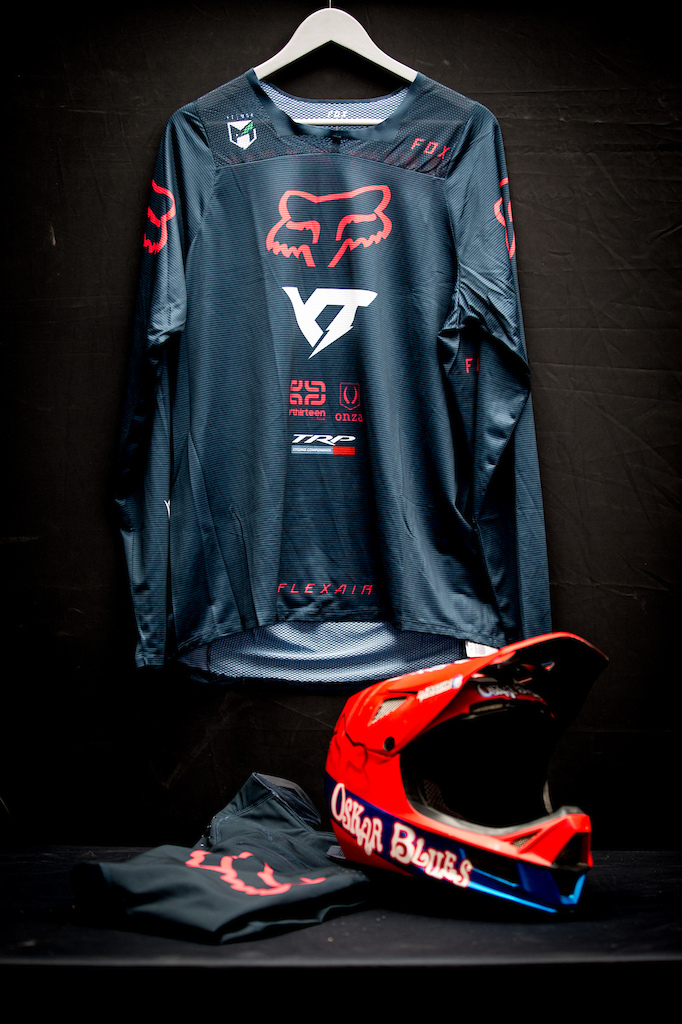 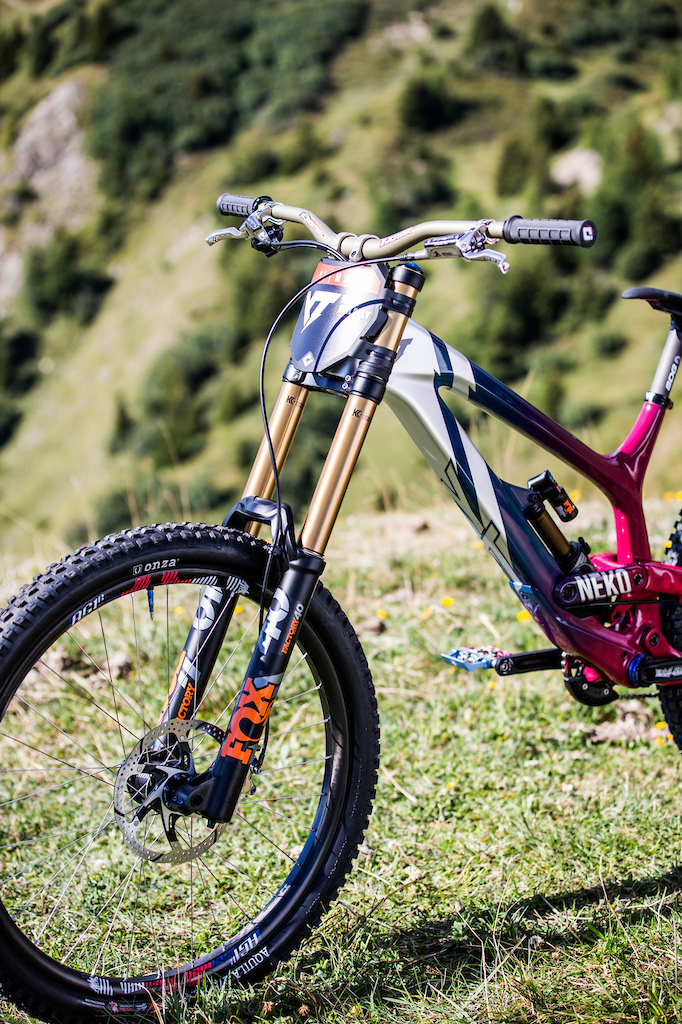 Treads + Trails works to get kids outside and in the outdoors on trails, builds and maintains trails, and donates bikes for low-income kids. Neko has been involved with the organization for some time now - helping with pump track and skills clinics for kids and working to create more awareness for the program. He says that he "hopes that these kids will be able to gain a love and appreciation for the sport of mountain biking" as he has. 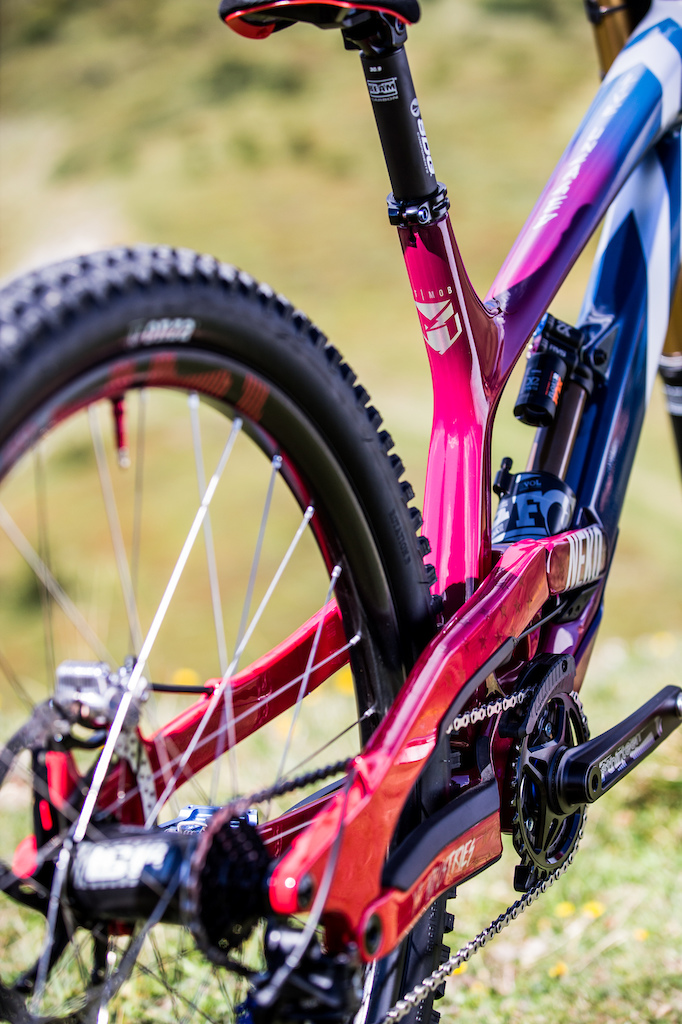 For a lot of the kids that benefit from the Treads + Trails program, the bike they get is the first new thing they ever receive. So, check out the bike and kit and then consider getting a ticket for the raffle. Sure, you may or may not win a bike, helmet, or kit but at least you'll help out some kids...and that's pretty cool. 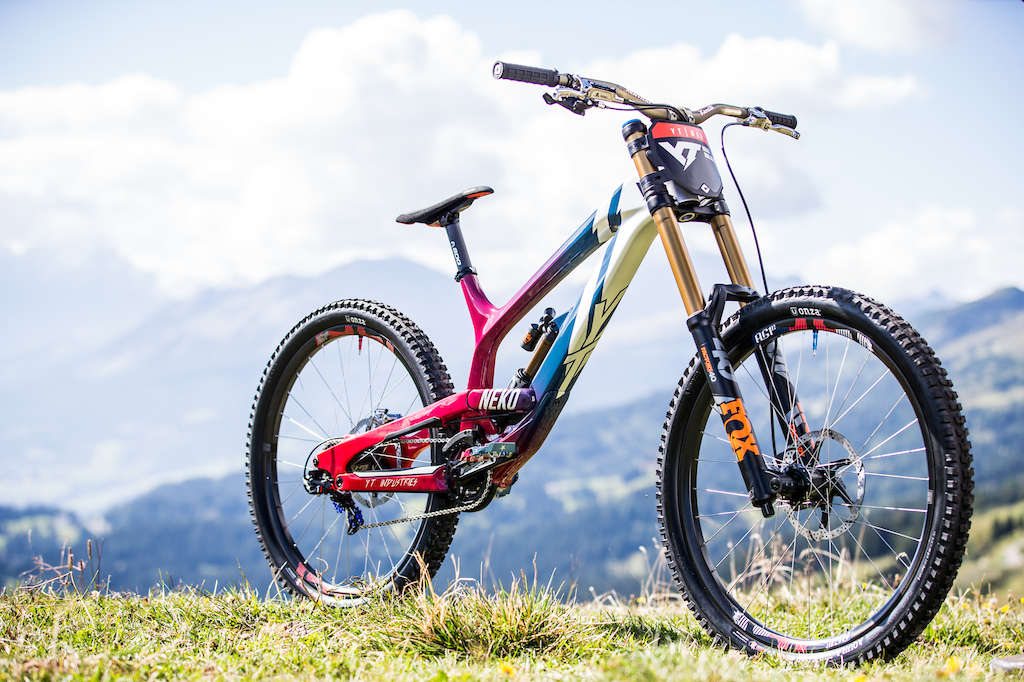 For more details on how you can help, check here.
Visit the feature gallery for additional images of Neko's bike and kit.

DaveJube (Sep 13, 2018 at 15:29)
That's a hot piece of action right der. I wouldn't know what to do with it if I won it though. Do you ride it? Do you put it in your living room window like it's some kind of major award? How would I explain to my wife that I'm leaving her for a bike? If I rode it at my local bike park I would have to carry it over any puddles.
Forget it, I have too much anxiety thinking about owning that bike. I'll have to pass.

rmalexan (Sep 14, 2018 at 9:32)
Swap the awesome parts onto a different frame and hang the custom painted frame over your fireplace to be forever admired? Thats what I'd do

thustlewhumber (Sep 13, 2018 at 13:12)
One of the most talked about bikes on PB for Worlds, and now we have the opportunity to actually own it. Buy a ticket my dudes!

Dennisvdb (Sep 13, 2018 at 14:14)
Why in the hell give out free raffle tickets?
Also, it's not clear in any of the rules or FAQ's if it's open for residents outside the US. You have to supply a Social Security Number, and stuff with IRS.
I've got the Belastingdienst here in the Netherlands, that's enough tax bullshit already!

NekoMulally (Sep 13, 2018 at 14:46)
Hey Man, Thanks for your interest in the raffle. Sorry it's a pain right now for non US residents. Can'd Aid is working on making it seamless for people to buy a ticket worldwide. Hopefully they get that done soon, but in the mean time if you are from outside the US and are having trouble buying a ticket please email info@candaid.org and they will make sure you are taken care of. They have already helped a few people this way. As for the tax stuff, that's just the legal wording they have to include in any raffle, I would't worry about it. Thanks everyone!

mtbikeaddict (Sep 13, 2018 at 12:18)
"Raffle for a Cause: Neko Mulally's World Champs Bike is for the Kids" LOL at first I thought only kids could win it... should've known better.

nattyp (Sep 13, 2018 at 21:34)
This competition isn't available to the UK, shame would love to enter and contribute, got to checkout and no option for UK state/province

bikindad (Sep 14, 2018 at 6:39)
Sheer azzkickery, coming yet again from North Carolina's mountain bike movement. Now, to get a ticket or two!

NekoMulally (Sep 13, 2018 at 14:51)
It is open worldwide! Right now the form to buy a ticket does ask for state/province, and they are working on getting that resolved. If you want to buy a ticket, from anywhere in the world and are having trouble, please email info@candaid.org and they will help you out right away.