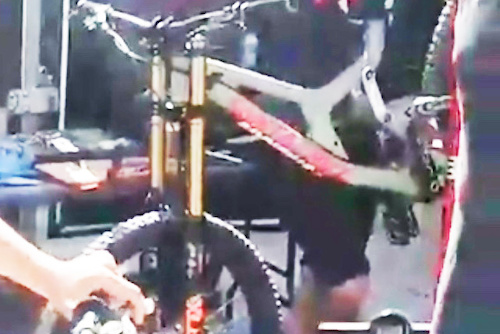 Enhance. Enhance!
With the Fort William World Cup only a week away, teams are starting to arrive back in Europe and are dialling in the bikes for the track. Instagram is addictive, but it's also a good place for companies to build hype and leak photos. As I was giving a good scroll through, sitting on a plane this afternoon, I noticed Luca Shaw's latest post of him riding at Fort William and the frame of his bike he was on blatantly scribbled out. I did a little more quick looking and Loris Vergier, along with the Santa Cruz Syndicate account both had more photos in their posts and stories showing blacked out bike frames. 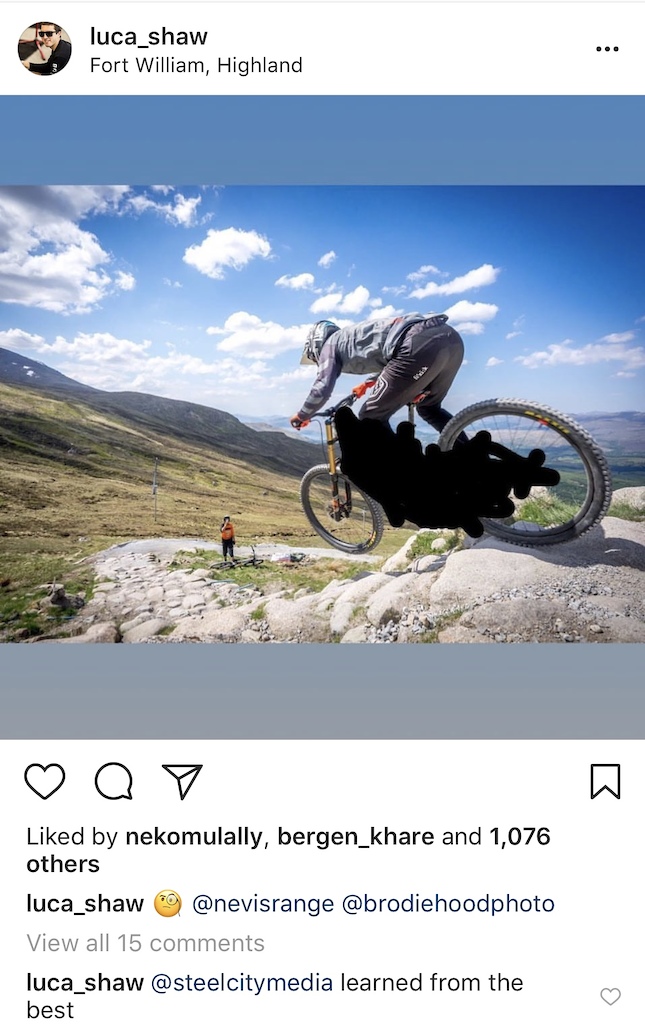 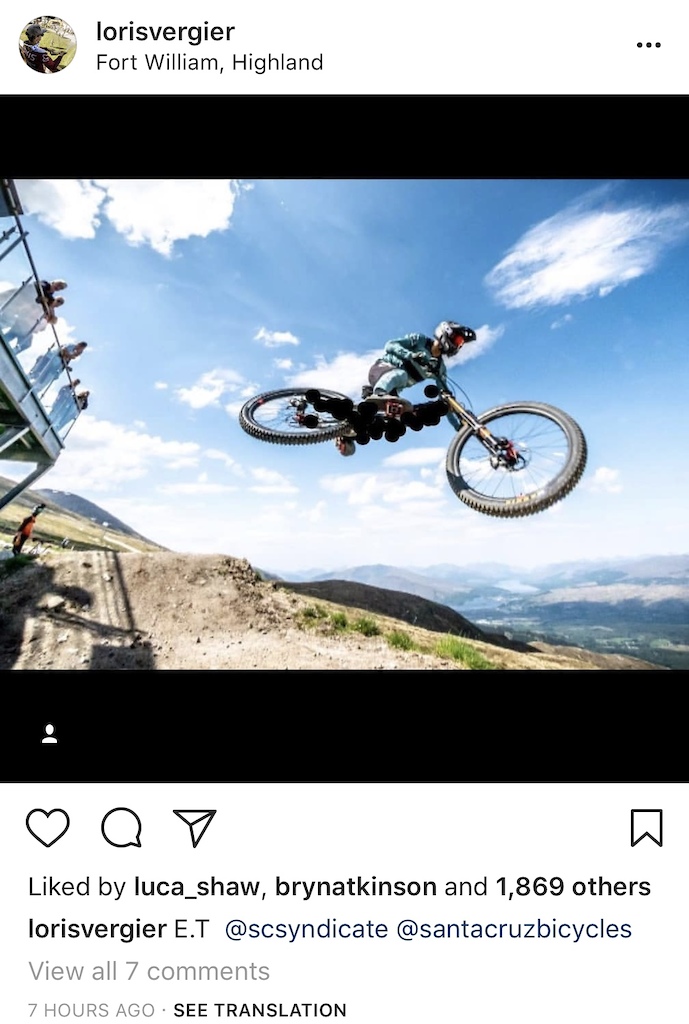 Sydnicate riders, blacked out bikes... Something's about to drop.
I reached out to Santa Cruz Brand Manager Seb Kemp, asking what the deal with the posts and the bike was and received the following reply, "Hi Daniel, Our engineers are constantly working on new bikes and the Syndicate are a key part of that development process. The needs of the Syndicate drove the introduction of the prototype 29er V10 that they’ve been racing on since the Lourdes World Cup in 2017. That’s all there is to say for now." It's a pretty boilerplate answer. I'd bet more than a few margaritas that if I sent a message to any one of a number of other people at Santa Cruz, I'd get the same response, word for word. 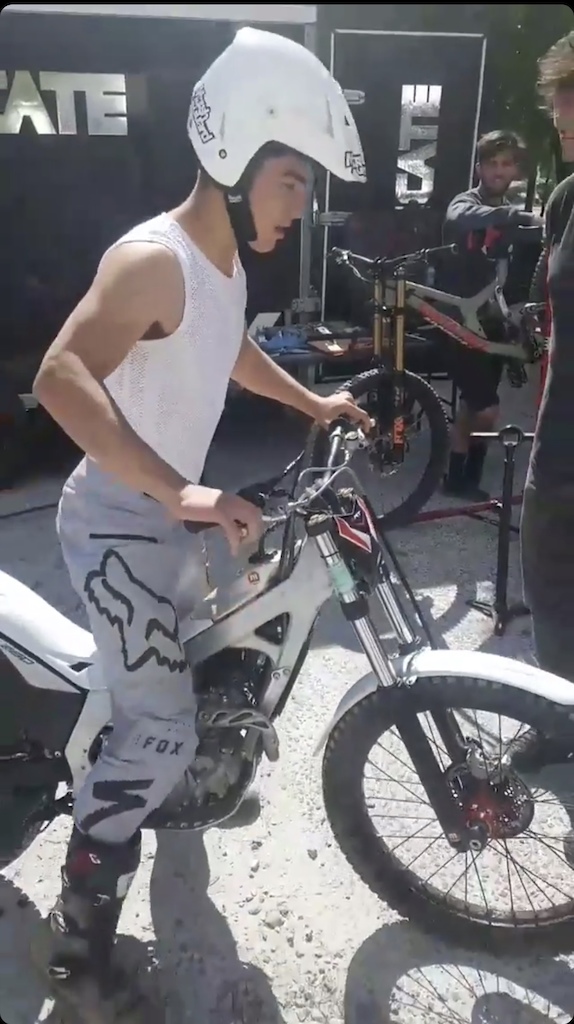 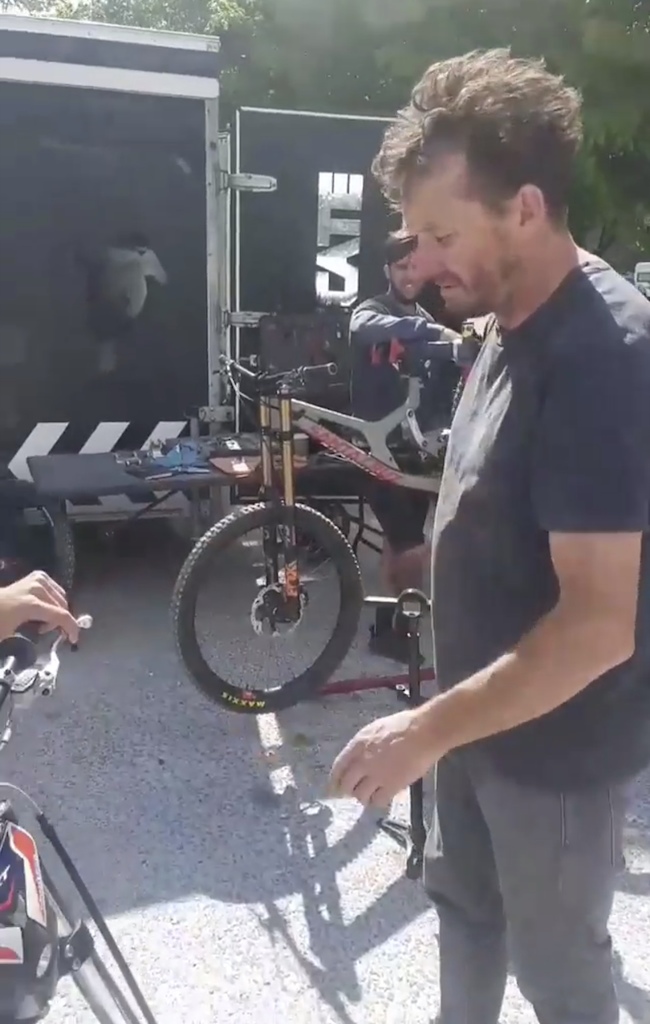 These screengrabs from Loris Vergier's Instagram story show a little more detail of the bike.
Is this the new V10 that's near production ready? The link looks unfinished and it's too far away to tell if it's an alloy mule. If it's carbon, then it's likely that they've tooled up and are nearing production, but they do have some new carbon mule prototyping capabilities now. Judging from the fork, it's a 29" wheeled bike with a dramatically new front triangle and link, even from the prototype that we've already seen riders on since last season. With the obvious hype being built around this bike, I would suspect that we'll have more details to share in the following few days, especially once practice at Ft. Bill begins and our photographers are on the ground.

qman11 (May 28, 2018 at 8:12)
No one noticed the picture from the pro grt article yesterday with Kiran Mackinnon (Santa Cruz R&D rider) riding an all white unbranded V10? Was clearly new, also had the new frame shuttle guard the new nomad has.

will54869 (May 28, 2018 at 11:50)
Doesn't SantaCruz have to sell a production 29er downhill frame this year because they raced one last year? Isn't their some UCI rule that mandates that?

heavyp (May 28, 2018 at 2:03)
Intense called they want their front triangle back! haha I really like it, I don't know why they didn't ride it in Croatia thou even for some practice runs to get some real work testing done.

thenotoriousmic (May 30, 2018 at 3:17)
@WAKIdesigns: I’m not excited about an over priced bit of cheap Chinese plastic that I’m not going to buy or ever ride. Is anyone else?

WAKIdesigns (May 30, 2018 at 3:59)
@thenotoriousmic: I rode Santa Cruz Bikes between 2008 and 2013. Then they became just another bike company. All the best luck to them but... like Ibis or Pivot or Intense... Cheap plastic. The only company from this pack that still excites me is Yeti.

thenotoriousmic (May 30, 2018 at 6:38)
@WAKIdesigns: yeah I totally agree. I was so hyped when intense made that prototype 29 dh for last season sickest bike I’ve seen in years and I’ve never been more disappointed with the production carbon version.

sewer-rat (May 28, 2018 at 0:27)
Will it climb like an xc bike? looks like a session , dentists , something about hub standards , room for a water bottle and heaven forbids that the bb will be press fit blah blah blah

Boardlife69 (May 27, 2018 at 22:45)
First one looks like it came out of the bat cave. Second one looks like large, fuzzy dice that still hang proudly like testicles from rear view mirrors. Ft. Bill is the land of race bike ya-yas.

northshorerider7 (May 27, 2018 at 22:47)
YT could afford to wrap theirs in spare tubes or whatever when they were trying to hide it. Syndicate had to use Lucas iPhone lol. How does that make sense when my V10 cost like $8k but I could get a decked out tues for $5k?!

NYShred (May 28, 2018 at 9:25) (Below Threshold)
To be honest, any bike in this industry over $3-4k is a sucker punch to your throat. Keep feeding the pig, buying overpriced steeds that will never make you a better rider or make you have more fun. I'd rather build my own for under $2k and shred the shit out of any trail in my way with a huge smile on face.

andydhteam (May 28, 2018 at 13:35)
@NYShred: thats your opinion bud but my bike made me a way better rider. Gave me confidence to send shit without the fear of dieing and it rides a shit ton better then my old rig and i have alot more fun..

betsie (May 28, 2018 at 0:00)
We were at Fort Bill on Saturday. The syndicate boys were flying. Steve Peat was there too doing some filming by the looks of it. It was also great to see Bruni out on track. The track is nice and rough in a couple of places and very loose with next to no rain in a while. The change to the visit Scotland arch jump.... it's short now! If the line is taped around it, can't see many hitting the jump.

wibblywobbly (May 28, 2018 at 5:36)
The one on vital looked finished. Had the shuttle guard on it like the nomad. I want one, but will immediately regret it after I buy it.

I’ve bought four Santa Cruz and every single one I feel ripped off on when I find out three days later that someone got it significantly cheaper. Guess that’s why the MSRP is so high because everyone is getting a bro deal and everyone’s bro deal is better than yours. Whatever... want to ride a dentist bike, you gotta spend like a dentist and I do like how it rides.

oilpathsuspension (May 28, 2018 at 6:17)
Until I get some time between a YT and a vise, I'll vote SCB as better quality. Not sure how often you take frame ending hits, though. Yamaha vs Kawasaki

Whistlerbike (May 28, 2018 at 14:15)
I hope this thing rides like a nomad V4, that thing is a beast. It's a mini dh bike. I have a nomad V3 and I blow through all my travel even with the biggest volume spacer you can get (float x) I think I need a X2 and run a lot of HSC. The V4 is so much more progressive though its travel. Hoping they come out with a Nomad 29er soon. Would love to get my hands on one of those. 29ers are the way of the future for people 5"11 and taller. 27.5 will always have there place and same with 26ers (slopestyle)

thedirtyburritto (May 28, 2018 at 23:13)
I just want to know what the hell shape head that dude on the trials bike has.....look how his helmet sits on his noggin. like a windswept conehead!

nickrxt (May 28, 2018 at 5:10)
@kiwikonadude: yes I really like these bikes. Would prefer them a bit shorter but still they are ahead of their time. Especially Nikolai .....

edmerklein (May 29, 2018 at 6:23)
who is that dude on the trials Moto. he's wearing fox X specialized pants and in the syndicate booth. lol

martijnsteenblok (May 28, 2018 at 0:39)
I Already thought something was of when i saw a Instagram story of Steve peate. But coudn't quit Find out what