Riding MTB hardtails in Poland? It’s so popular that we could easily say it’s almost our national tradition. This goes also for gravity riding in the tough terrain. In the past, hardtails were usually chosen because of their lower price and lower maintenance costs. And Dartmoor was always one of the pioneers in designing modern gravity hardtails that kept up with all the new standards and riding styles. 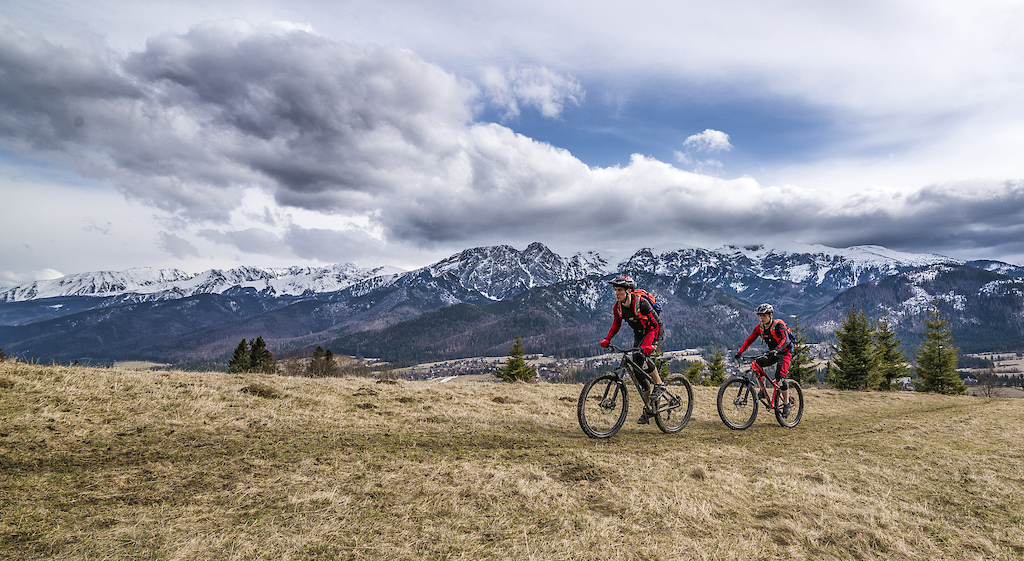 You can find hardtails enthusiast almost on every type of trails in Poland
Anyway it has been changed recently. Popularity of trail and enduro riding generated increased demand for gravity hardtails and they definitely evolved. There are a lot of riders who would rather spend less on a hardtail frame than on a full suspension one, and instead equip their bikes with better forks, wheels or more reliable brakes. What’s more, hardtails are usually more durable and more trouble free than full suspension frames for similar type of riding. Hardtails will always be lighter as well and designers can position BB lower for more stable riding. 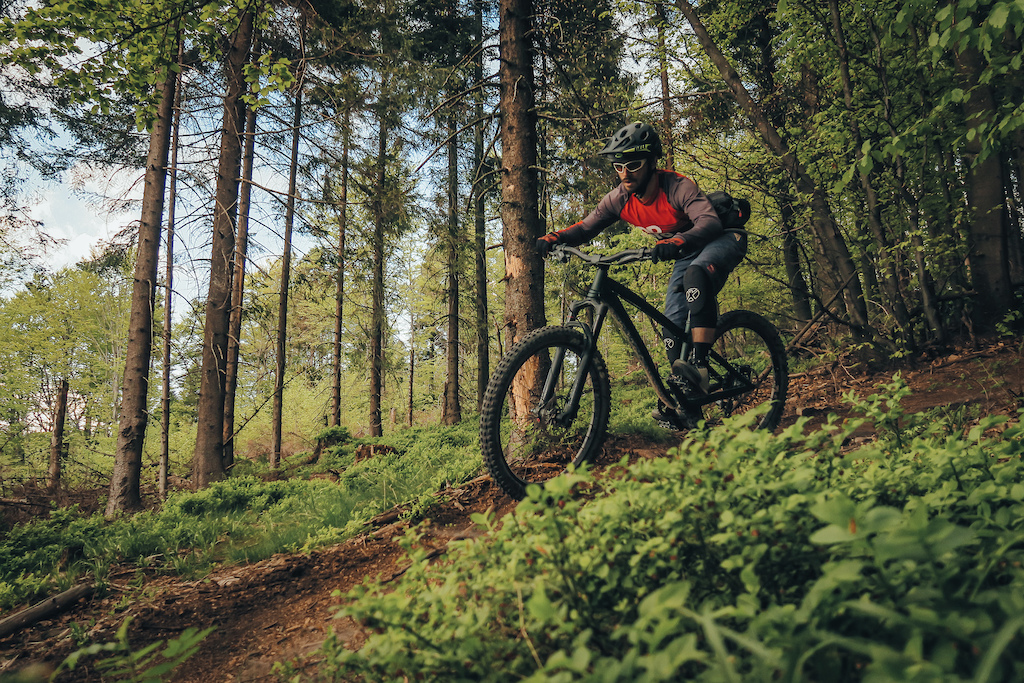 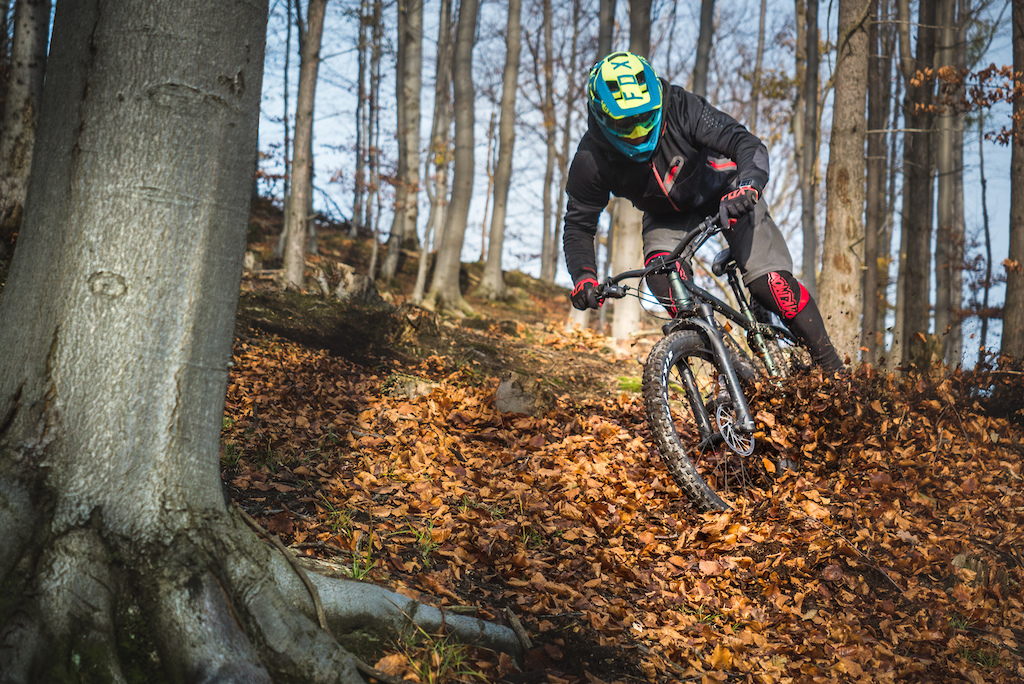 Shredding with Hornet
Even so many brands entered this niche in the past few years - Dartmoor Hornet is definitely a true legend of gravity hardtails, and the 4th generation of this frame is one of the most hardcore hardtails ever made. We developed it to ride the gnarliest trails, with big drops and huge jumps. The frame was designed to use a 160mm travel but you can match it even with 180mm freeride forks and we’ve even seen some Hornets with dual crown forks riding downhill tracks! Hornet has a modern progressive geometry with the same low standover for all sizes and it is often the first choice for the most aggressive hardtail riders. 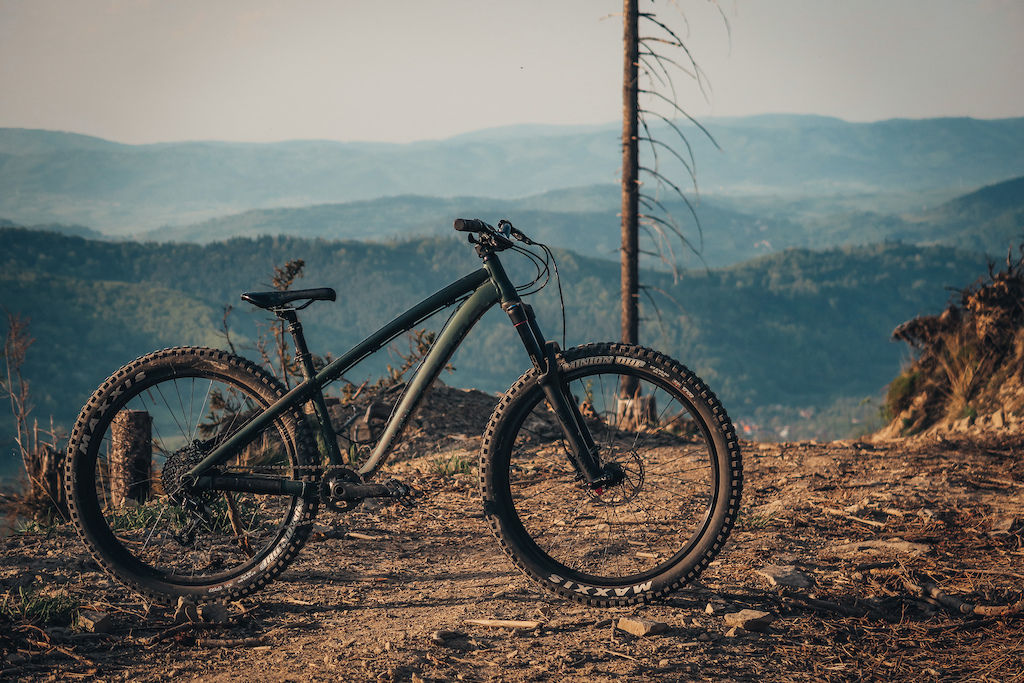 Meet Hornet - pure hardtail hardcorness
Hornet’s evolution towards more and more aggressive riding started to move it away from the riders looking for more versatility in hardtails. And so, for those who are looking for something lighter and more uphilling friendly that would still be capable enough on the descents… the Primal appeared. The frame also evolved in the last 4 years and the latest generation which was launched in 2018 is available in two wheel size options - one for 27.5" wheels and one for 29-ers. New Primal is now one of the best all-purpose gravity frames. It has fans among long distance travellers craving for dozens of kilometres of mountain riding per day, but also among the more aggressive riders that would rather choose enduro paths. It will also bring a lot of joy while riding on smooth flow trails, or jumping and cornering on local, natural trails. 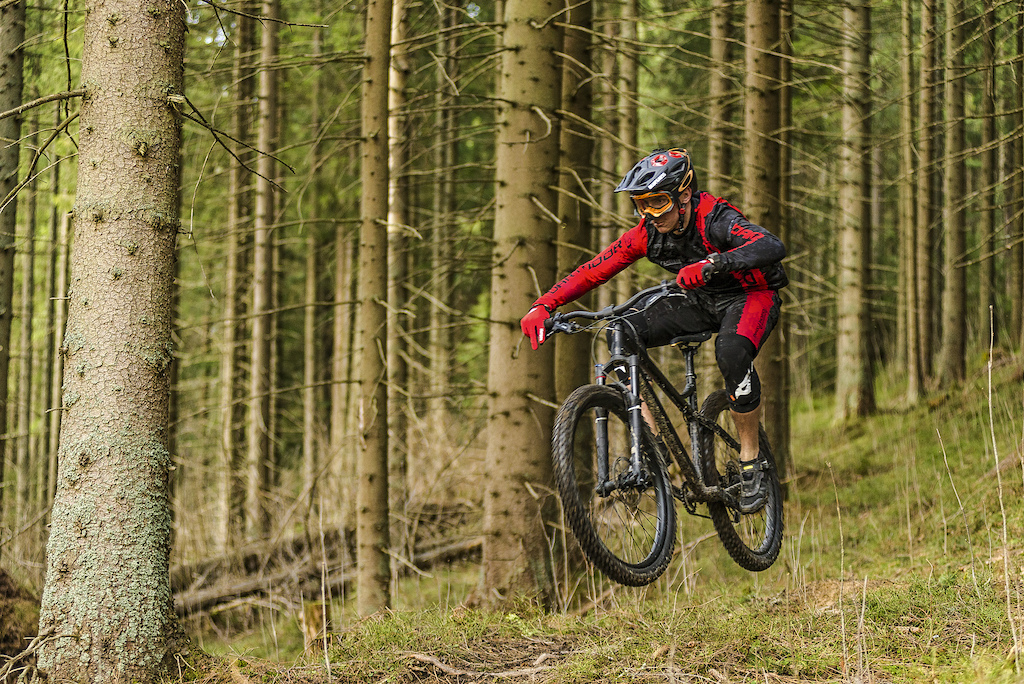 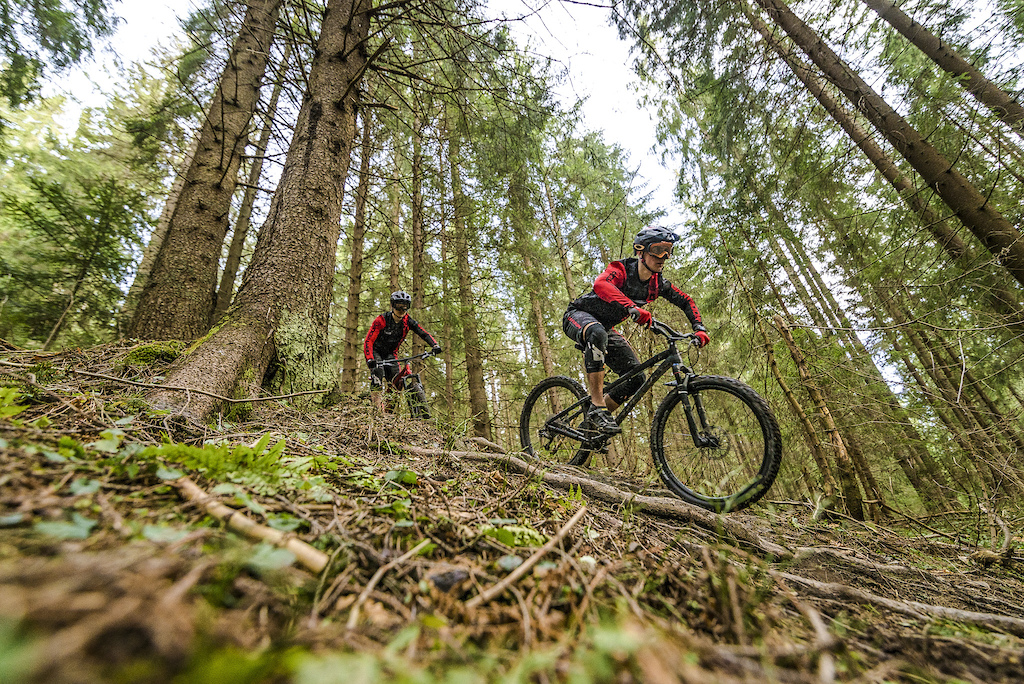 Primals in action
Primal is lighter than the Hornet, and it’s dedicated for the forks with around 140mm travel. Seat tubes are slightly longer than in Hornet but the standover height is still low. Both frames in the 27.5” versions are compatible with the large volume tires of up to 2.8” which offer more riding comfort while Primal 29 has enough clearance to fit 29x2.4” and can ride really fast! 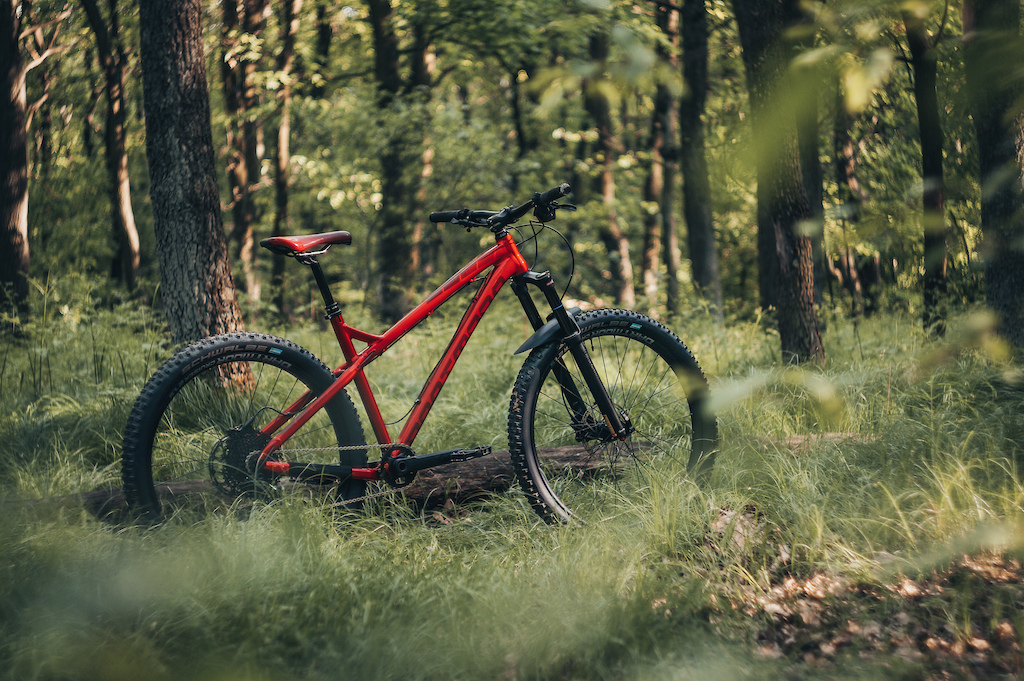 Primal bikes are perfect for long distance ride!
Like Dr. Jekyll and Mr. Hyde, both of these frames have a lot in common but same time they are also totally different. If you need to make a decision which of these two frames will be your new one - first ask yourself what is making you really excited - freeriding, drops and jumps or maybe riding longer distances in the mountains with demanding uphills and steep descents boosting your adrenaline? If you choose the former, then the Hornet is for you, if you opt for the latter - you are meant to ride the Primal. 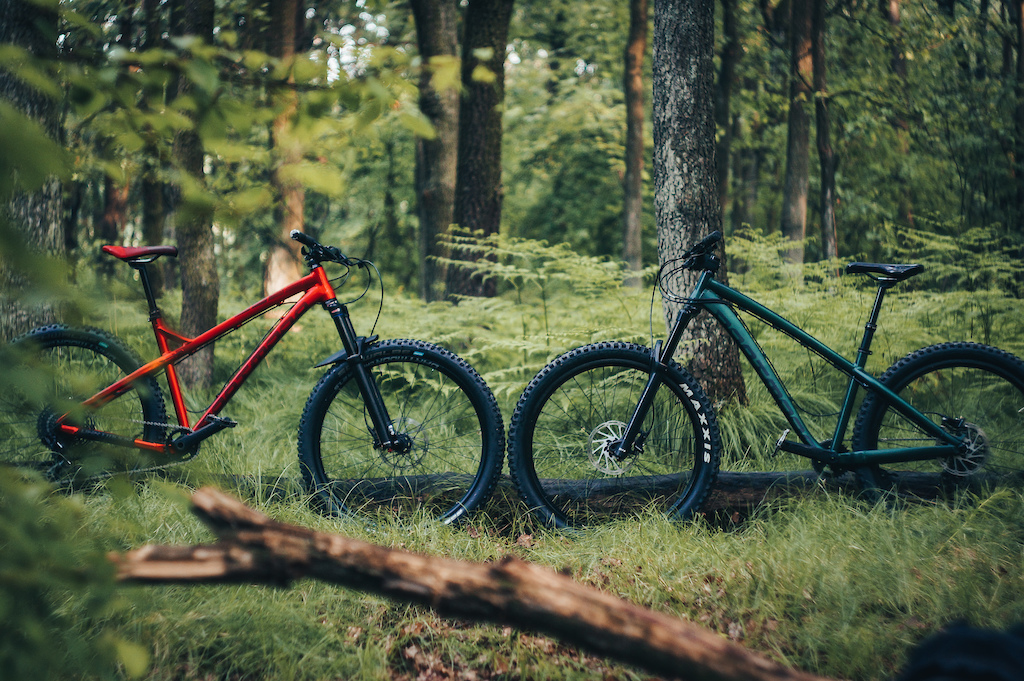 Look similar? Just take a closer look, and you will find the difference.
MENTIONS: @dart-bikes

vinay (Jun 19, 2018 at 4:13)
Would it? The impact still goes through your feet, shouldn't bother your neck and back too much. If anything gets them excited, it must be us typing from behind our keyboards (or even better/worse, swiping on a tiny cellphone screen).

HairyLegs (Jun 18, 2018 at 5:33)
I have bought a Hornet frame and it flipping rocks .... more than happy to also ride many a miles or tech trails on the Hornet, overall just such a great versatile bike, and setup with a 160mm DVO really rocks my boat! Now if only Pinkbike could review a lovely Bluebird or Blackbird frames from Dartmoor please!

enduroNZ (Jun 18, 2018 at 15:44)
I have a hornet. Bought the frame and built up myself. It is hands down the best hardtail i have ever ridden and ive had a few LT hardtails now. The geom is just spot on

felimocl (Jun 18, 2018 at 5:09)
As much as I love Dartmoor hardtails and will always recommend them as they are unreal and we'll priced. The only gripe I have slot hem though is the quality of the full builds. It seems like a bit of a let down that they spec their bikes fairly basic. Looking the specifications of the primal and hornet there is a lot of rst, X5, lack of dropper posts, 9 speed drivetrains and other base level suspension. Even among the pro models there is stuff you would find on base level bikes from other brands. As much as I love my hornet and will keep recommending the hardship frames in work, I wouldn't do he same for the full build. Rant over

HairyLegs (Jun 18, 2018 at 5:35)
There is always the option of buying a frame only if you want to spec it up with high end parts ... the builds from their site are intended to offer a "value for money" build .... what you do with a frame and custom build in turn is determined by only you and how deep your pockets are.

Asmodai (Jun 18, 2018 at 6:08)
the same can be said about NS Bikes too, it makes no sense for me to buy full builds both have pretty mediocre specs but you still can get framesets for a decent price

slamman (Jun 18, 2018 at 12:49)
We can sort this out for you, we are Slam69 and the UK importer for Dartmoor. We don't sell the stock completes but prefer to build them ourselves. Feel free to get in touch and sort your build and at great prices.
slam69@hotmail.co.uk

vinay (Jun 19, 2018 at 2:04)
In their defense, if the spec'd stuff already works well enough there isn't much need for something fancy that's more expensive to buy and maintain. Especially back when I started out, I was just breaking stuff through silly crashes etc. Which taught me what for me specifically was worth upgrading to something lighter and what required upgrading to something stronger. Look at this as your starting point and it is probably fit for the job. But over time it will turn into the bike that's best suited to you and your riding. Wide range or narrow range gearing? Dropper post, and if so, what type? type of tires? Of course an overspec'd bike may already suit more people but then again, it may also require more months doing shitty jobs saving up for the bike. It is great having some more affordable builds out there which evolve as people and their riding evolves.

manback (Mar 11, 2019 at 19:29)
My back screams when hard-tailing in mountains. No matter how fun it is, I can't use it anymore. But man, this Devil Red color is pure sex! Price of Hornet frame is a blast. You could literally buy one and take some of not used any more parts from previous bikes. Put it together and you have dirt cheap tank-bike.

fabeltierkater (Jun 18, 2018 at 6:44)
I loved my Hornets, really fun bike. But I managed to crack the seat tube of both frames I had... I really wish there was an XL version with a seat tube length of maybe 50 cm.