Mar 31, 2010 at 21:43
by Dave Mackie
Tweet
We've been hearing a lot of news about all the work that's been done at the Kamloops Bike Ranch DH course from our friend and course builder, Wayne Parsons.

A few phone calls rounded up good buddy Bryan Gioia, Pinkbike team racers Darryl Bartlett and Tyler Gorz, along with Hayes Bicycle Group test rider Taylor Bloy and we were off to Kamloops.Darryl previously wrote a ride tale about the weekend, this story will focus more on the race course details.

Wayne has nailed it this year with the Kamloops Race the Ranch course. It bears no resemblance to the old course in any shape or form. He started planning the new course after last year's race, and inspired by the 2009 World Championship course in Canberra, Australia he set out to make the most of the limited elevation he had to work with. Being an ex-elite downhill racer himself, he knew exactly what was needed to design a challenging, but fun for all skill levels course. Funding from the city of Kamloops enabled Wayne to bring in some heavy equipment and import some much needed rocks to the area, putting a little gnarl into the dusty hill and also allowing him to pack the dirt down to try and avoid the typical Kamloops bomb holes that appear after 400 or so racers tear the place apart.

The new course has something for everyone. 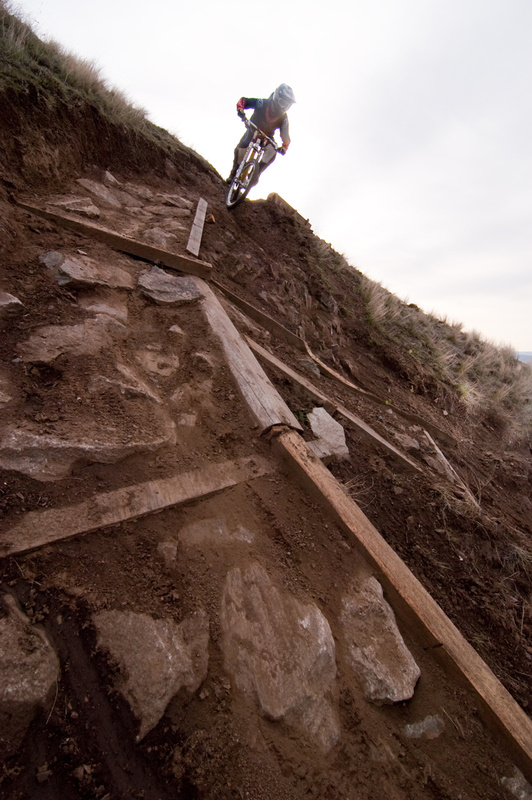 You want steeps, he gives you steeps. The course sends you straight down an gnarly rocky pitch. 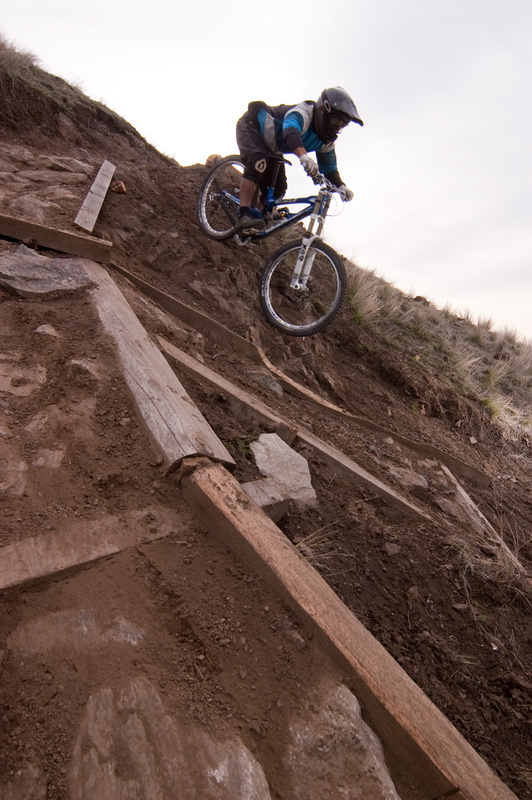 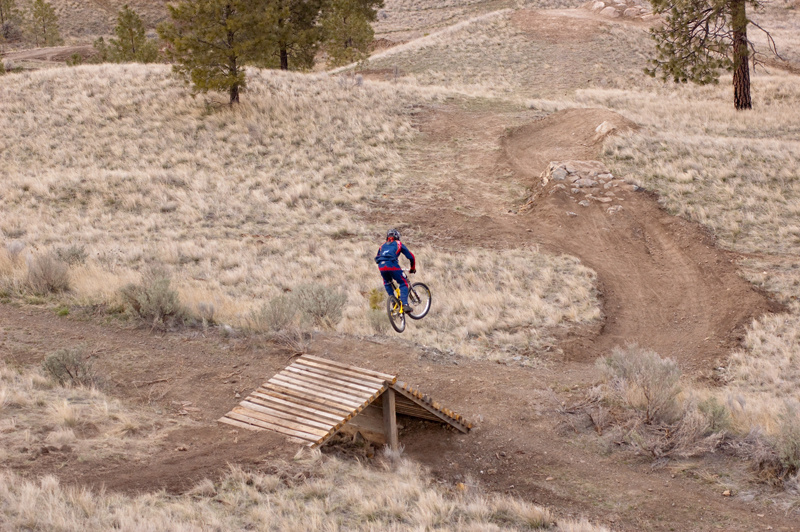 You want big air, he gives you big air. The road gap sends you, there's some hefty hang time off this one.
You want jumps, well there's jumps...I think I counted no less than 24 jumps on the course including some nicely built hips to test your air style. 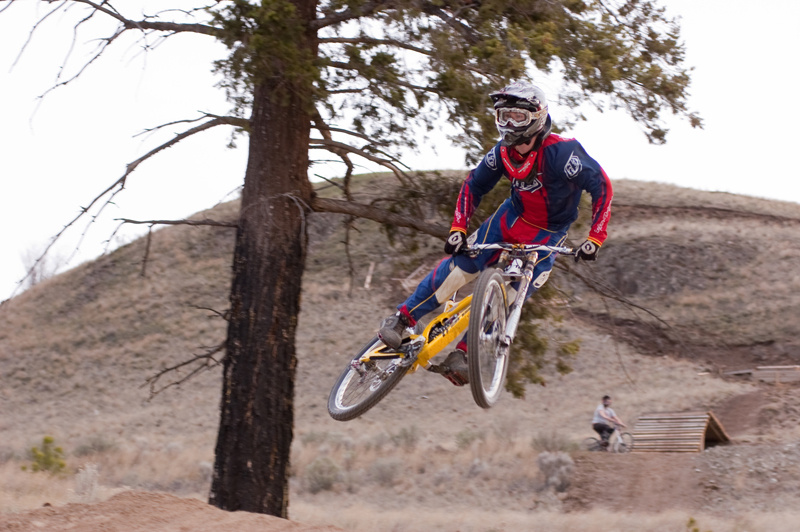 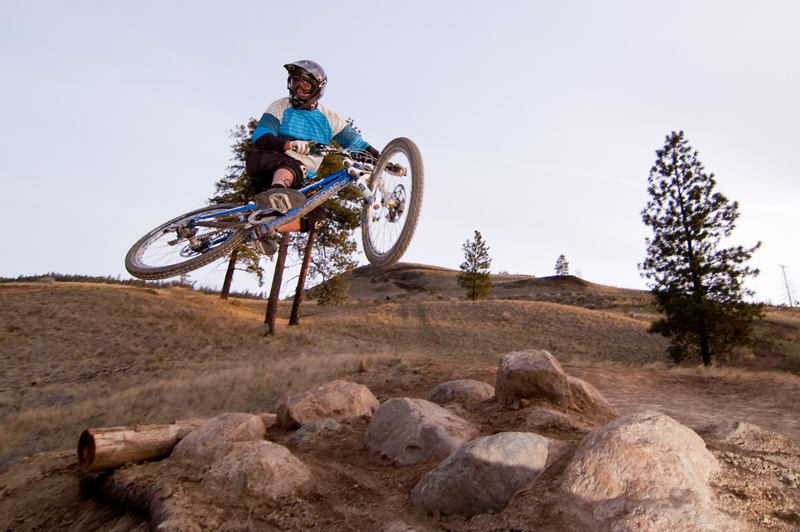 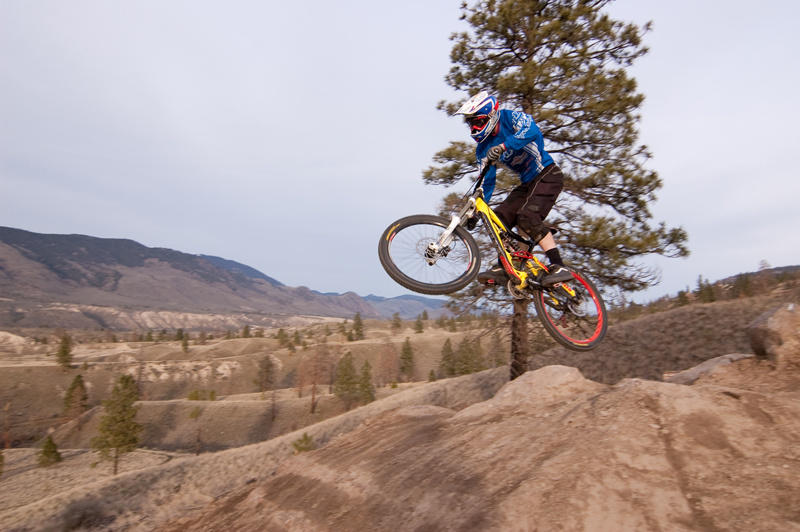 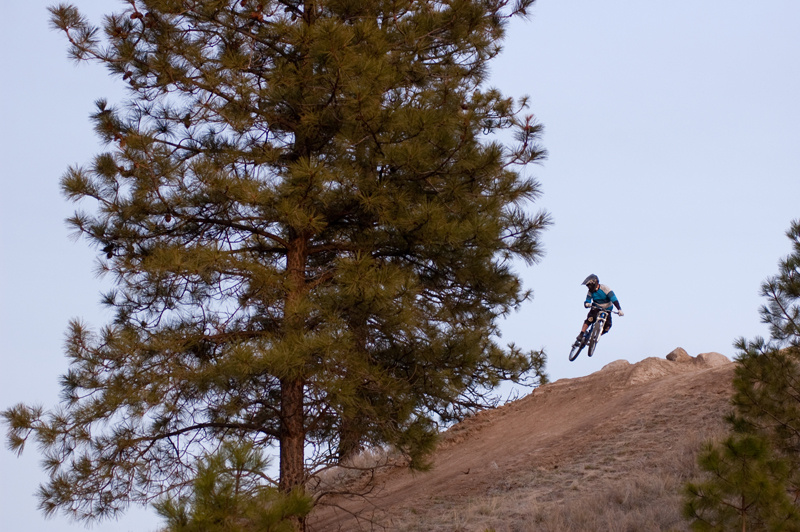 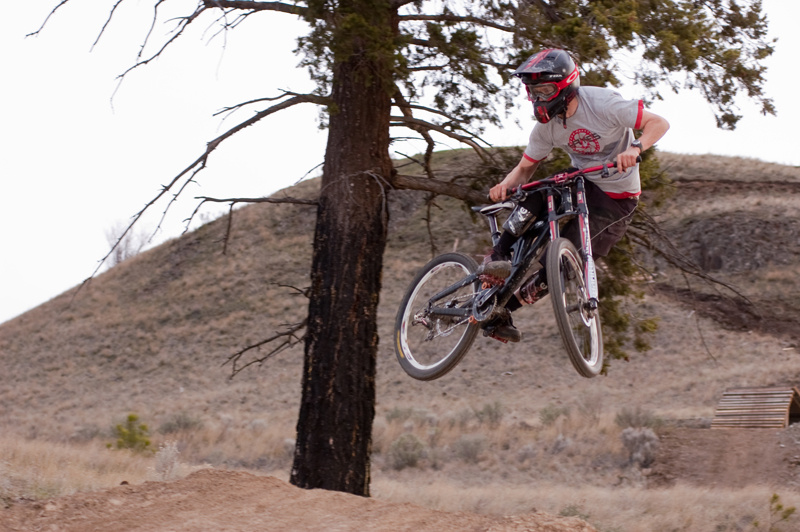 and you want to satisfy your need for speed? There's plenty of rock skimming, jump scrubbing goodness in there too. 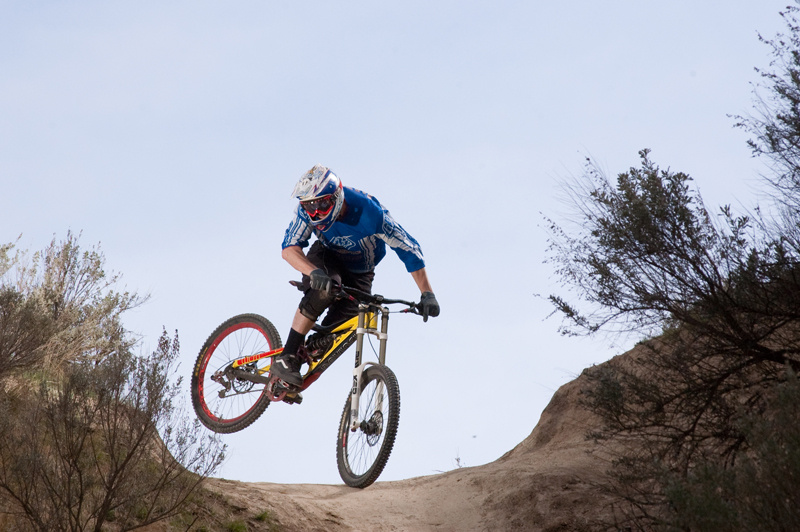 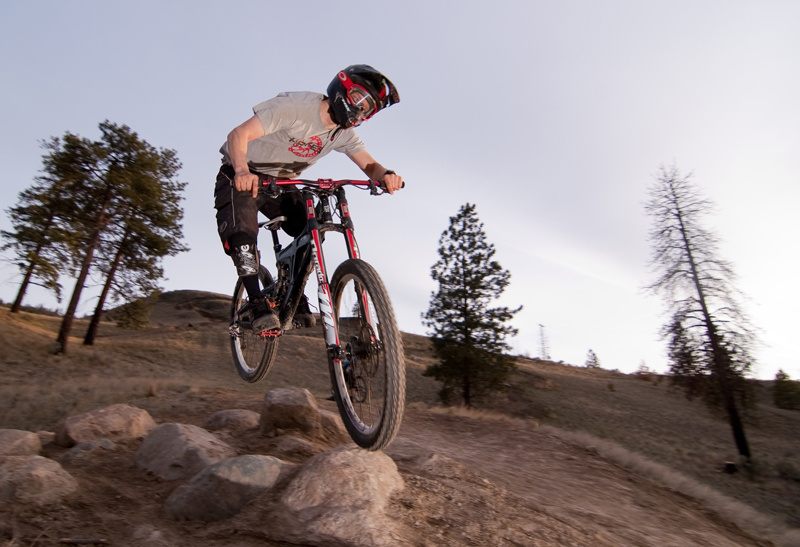 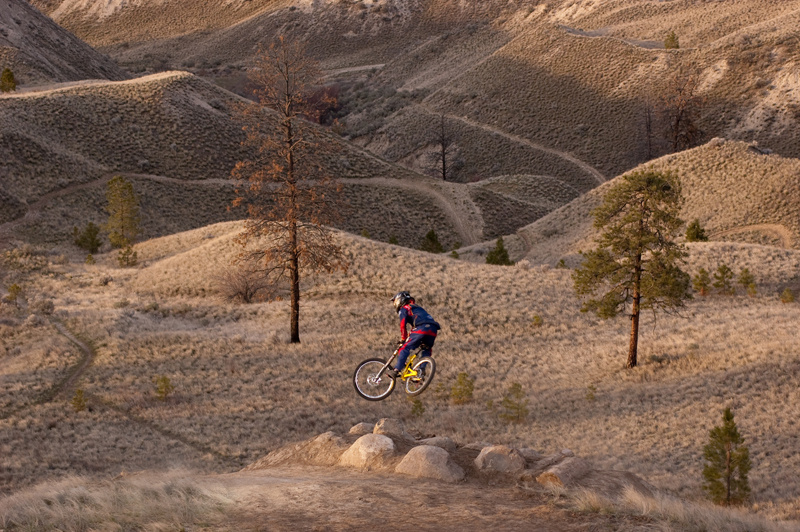 In case you missed it, here is the pre-ride of the new course too:

criscokid25 (Apr 7, 2010 at 10:34)
I think all the haters on here need to recognize the fact that this track is in the city of Kamloops...I mean inside of the city limits. if I am not mistaken, this is one of the only mountain bike parts within city limits...anywhere. Also...Kamloops is an arid, semi-desert climate so there are no slippery, rooty, techy wet sections. Its fast, steep, dusty, dirty, hang on type of riding. Congrats to Mr. Sanchez and the city of Kamloops for stepping up and supporting the mountain bike community.

whitetux (Apr 7, 2010 at 1:08)
volcom is being sarcastic, as that 'race track' Is very flat, with short uphill sections and less technical sections than a pump track

StuHaight (Apr 13, 2010 at 10:19)
What was that one race where everyone put dhx airs with the pro-pedal on and Sam H road his sx trail in the DH race because it was so pedally? Would they be doing the same on this because it's so smooth and 8in might be a bit much?

stephbowcycle (Apr 14, 2010 at 23:31)
Most people were running shorter travel bikes at this race. I used an SX Trail on it a few years ago and that was pretty good for travel (although there was no road gap, less rocks, and some more pedaling before they changed it).

DrSanchez (Apr 7, 2010 at 6:49)
Thanks guys. My little friend Bobcat T300 deserves most of the thanks though. Yes, its not your typical dh track I know. The land is made up of silt because it used to be a river bed. This area has no rock of any kind. Every piece has to be brought in by truck, bobcat, or by hand. So making it technical is a hefty task. Best thing to do is make it fast with drifting corners and no berms.

DrSanchez (Apr 7, 2010 at 13:07)
This is also a public bike park, open most of the year. That means that most of the people riding the trails are kids. Nothing can be too challenging in there, like no 40' gaps or do or die features. It doesn't matter though because the same people still win, no matter if the course is super challenging or easy. The BC Cup series is also a development series. I believe BC Cup courses should appeal to both beginners to elites and this one does. That's probably why our venue has the highest number of racers on the circuit.

DrSanchez (Apr 7, 2010 at 15:23)
I did ride the upper section and made some changes after. More changes are to come before race time. I don't have a dh bike so I am unable to ride it.

Brydenscott (Apr 7, 2010 at 17:45)
big thanks though man! it's super fun now compared to the old course...just think how gnar itll be in the middle of the summer!

pinityafairy (Apr 7, 2010 at 14:22)
Props Dr. Sanchez! Super amped about this track. It's nice to have so much variety in BC. Anyone who hasn't chased a complete BC Cup circuit should do so. Surviving some of the tracks isn't easy... a lot of people got claimed last year. Opening the series up with speed and air is just what the doctor ordered! Sweetness.

benshreds (Apr 7, 2010 at 10:14)
That looks like it would be super fun to go race and chill with all the rad people that show up. Those that show up will prob have nothing to prove, just there to have fun and enjoy riding. I agree apokos, a road trip might be in order.

cannondh (Apr 7, 2010 at 17:08)
Im not going to say that its a bad course and maybe I get a lot of ne props, but the track looks siiik too ride but its not a technical course, maybe for some of the reasons that are previously commented, it looks fun to ride, it has sick fast jumps but its not a tech and challenging course... pretty sick job, congrats

stinker (Apr 10, 2010 at 21:00)
well id say the top half is petty dam technical due to the bermless corners, steepness and rock gardens on the corners

leelau Plus (Apr 7, 2010 at 17:40)
Dave - looks like you got the Vholdr? I can't believe how progressive that is for a municipal course. Could you imagine if District of North Vancouver was half as good as Kamloops? Beautiful pictures too of course

dave-m (Apr 7, 2010 at 17:47)
Hey Lee, nope that's the Pinkbike GoPro HD. The wide open daylight of Kamloops sure made it nice to shoot photos and video! Such a change from the dark wet coast. Yes, the District of North Vancouver could sure take a lesson from the city of Kamloops!!

DrSanchez (Apr 8, 2010 at 7:55)
The city of Kamloops has been a pleasure to work with. They promote sport and consider the park to be just another venue to host competitions like any other venue in town. Pretty much anything we want, we can get.

sammorris (Apr 7, 2010 at 2:06)
probably one of the least technical DH courses i have ever seen! Do you even need to use your brakes? Wheres the roots, steep turns and technical sections??? Racing will be won or lost on the jumps. Does look run to ride

adamdigby (Apr 7, 2010 at 11:38)
I don't think the jumps actually matter, it's all going to be won on the pedaling. Jumps are just for the guys that don't want to win, most of them look like i would over jump to flat.

brandonf (Apr 7, 2010 at 16:40)
as a nice flowy trail, it looks amazing, but as a DH race course, its a little lacking. Still will be fun though I"m betting and I'll be in the bike ranch so theres shit tons of stuff to hit up besides this course

apokos (Apr 7, 2010 at 10:03)
I'm thinkin I need to take a road trip. That track looks awesome for jsut riding and improving for a rider at any level. Sick pictures guys!

sunpeaksrider (Apr 7, 2010 at 20:45)
i rode it today sickest thing the ranch has ever had and that rock face section is not done justice in this segment its pretty gnar

brule Plus (Apr 7, 2010 at 9:18)
BC has so many race courses that are full of gnar, this is a good option for variety.
Below threshold threads are hidden

drewmouli (Apr 21, 2010 at 9:04)
bahaha yeh, its a pretty sweet trail pitty my TR450 doesnt get here for a while, gonna miss the race, if we wanted fully gnarl riidng, we go just round the corner to the other DH tracks