$1000 GBP
Hi all, selling on behalf of a friend who doesn't have an account, please send me a message if interested and I can put you in touch with him. He has owned the bike for 2 or 3 years now and it has always been well maintained, has been raced in the Pearce series. Frame bearings changed last March. Forks serviced just prior and rear shock serviced late 2017. The frame does have cosmetic marks the worst of which are shown in the pictures but no dents, cracks, gouges etc. The bike is currently missing the front brake due to a bent lever, so this will need replacing. The shifter was using a matchmaker clamp so is currently not mounted but will come with the bike. Forks - Rockshox Boxxer Teams, hard spring Rear shock - Rockshox vivid R2C with 350lb spring Wheels - Commencal Alpha front rim and hub, Hope Pro 2 Evo blue on a Spank Spike 28 Race rim. Both wheels have slight buckles as to be expected on a dh bike but run fine. Drivetrain - Sram X01 7 speed mech, X01 shifter, GX cassette, RaceFace Chester cranks, Raceface narrow wide ring. Brakes - Sram code rear, front missing as mentioned above. Nukeproof seat and raceface post Cockpit - Renthal bars, Gravity Light DM stem, Nukeproof grips Tyres - Bontrager G5 Pay on collection or bank transfer. Only selling due to an upgrade. Will ship within uk As mentioned above please send me a message and I will put you in touch with him. Cheers

$1200 GBP
Giant Glory 1 2016 in Large for sale. I bought this bike new in September 2016 in New Zealand and since then have upgraded pretty much every part with only the brakes (my next planned upgrade), seat and seat post being stock. You will not find a better specced bike for this price! The frame has been invisiframed from new which has kept the worst of the scratches off however there's some areas under the bb and around the rear dropouts that have some chips and flaked paint. As you can see in the pics the invisiframe is also a tatty now (I fitted it myself) so I'd recommend removing it and redoing it, underneath the invisi the frame is fine however but it makes the frame look a bit tatty and in worse condition than it is. Spec Frame: Giant Glory Large, all frame bearings replaced in Feb 2018 Forks: Marzocchi 380 C2R2 Ti custom tuned by jtech, feel amazing on track, set up to be very supple for first 3ish inches and then ramp up -  serviced by jtech in March of this year with new sks seals etc (running a mix of crown bolts and only 1 pinch bolt having lost the originals in transit back from nz, could be sorted for a few £ but has never bothered me) Shock: Fox DHX2 Air Drive train: Sram x0 dh cranks, Sram x01 7 speed shifter with 7 speed GX mech and cassette, x01 shifter means the shifting feels mint and the GX parts mean replacement/maintenance is far cheaper with no stupid freehub and feels just as good, the shifter is the part that makes the difference. Mrp guide has had the lower roller cut off to reduce drag as its not needed due to the top guide, clutch mech and narrow wide chainring Wheels: Hope Pro4 Tech DH wheelset, has been on the bike about a year, 1 or 2 small dings in the rear, nothing that will effect the performance, front is fine Brakes: Sram Guide R with brand new pads one ride old. Bars and stem: Spank Spike vibrocore bars 780mm wide 30mm rise, these bars are amazing for anyone who suffers from arm pump, massive improvement from any other bar I've used. Spank Director stem, Renthal super tacky grips. Tyres: Maxxis DHRII 3C maxxgrip, only used a few times. Spare pare of almost new 3C shortys can be included if asking price is met. Bad points: Probably could do with a new BB, has the odd creak now and then. Shock is due a service, I can get this sorted if we negotiate a price. Rear mech is slightly bent but still shifts fine. I will grab some better pictures this week. Only selling as I have upgraded. Cheers. 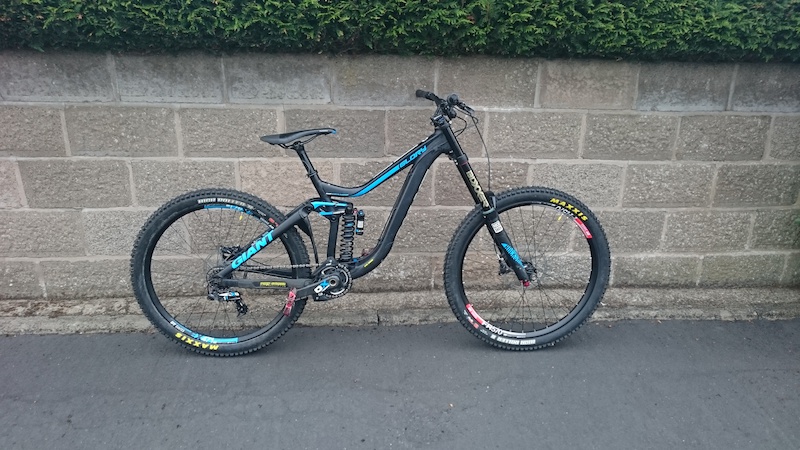