Jan 2, 2010 at 15:20
by David Bennison
Share
Tweet
I have known Scott Alleyn for well over 10 years now, I got a chance to sit down and talk to him about the 2010 riding season and what his plans are for this coming season.

Interview and pics of Scott's new Dartmoor bike inside,Who are you?
I am Scott Alleyn, I grew up just outside of Kimberley, BC on an acreage. I am 21 and I like to ride 26" bikes down mountains or on sculpted dirt piles.

What other sports are you into?
Biking is the only sport that I find fun enough to keep doing. 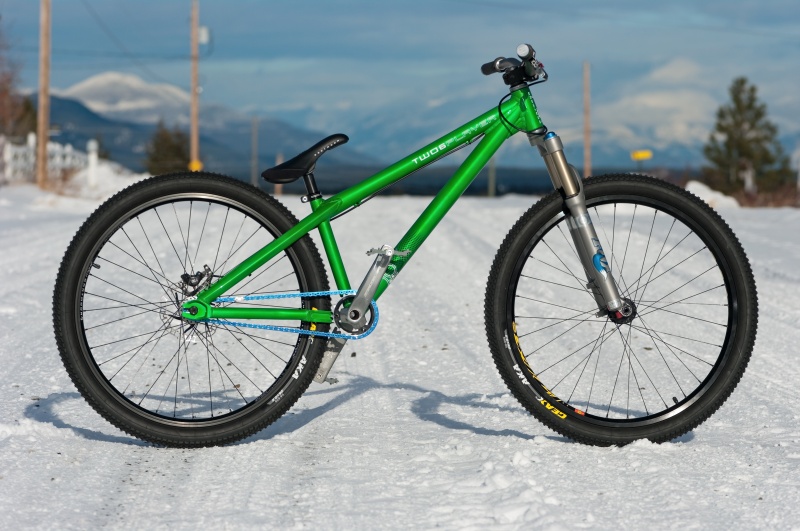 When did you start riding?
I started riding when I was 6 but I got my first decent bike when I was 12, it was a 2001 Kona Roast, that's when I remember starting to build ladder bridges and big drops to pinner flat landings. Ever since then, I just kept progressing.

How was the '09 season?
As far as 2009 goes I just biked a lot and learned some new tricks, I really didn't travel as much as I wanted too. I went to Creston for the Goat Style bike jam and helped build it, then rode it. That competition is always a blast. I also did some filming for a 2009 promo filmed and edited by Nic Genovese,


What makes you try to push your limits?
When you learn a new trick you just get this awesome feeling, so I try to push myself to keep getting that feeling.

When building dirt jumps, what makes you come back day after day?
When I am building jumps I just keep thinking about how sick and fun it'll be to ride this jump once I finish it. Then once I am finished, I ride it and it always turns out to be worth it. 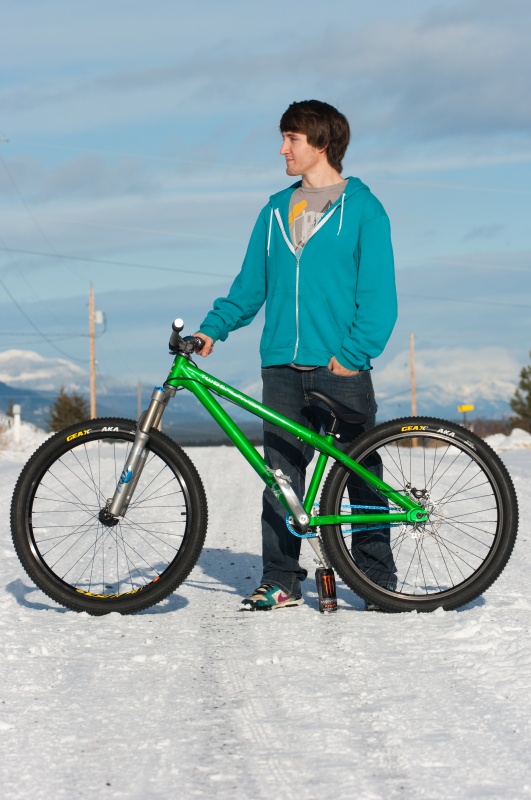 What's your favorite place to ride?
My old jumps that were torn down when my parents sold their house.

What are your goals for 2010?
For 2010 I would like to travel a ton and enter some bigger competitions, such as Creston Goatstyle, Teva Mountain Games and Crankworx Colorado. I also hope to get a part in a bike film.

Any shout outs and thank yous?
I would like to thank Dartmoor Bikes for hooking me up with my new ride, they are just branching out into North America this year. Go check out their site here. 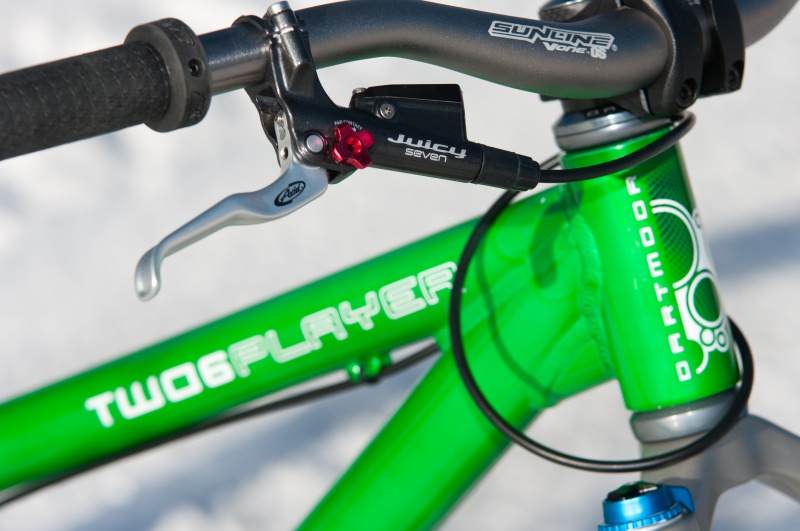 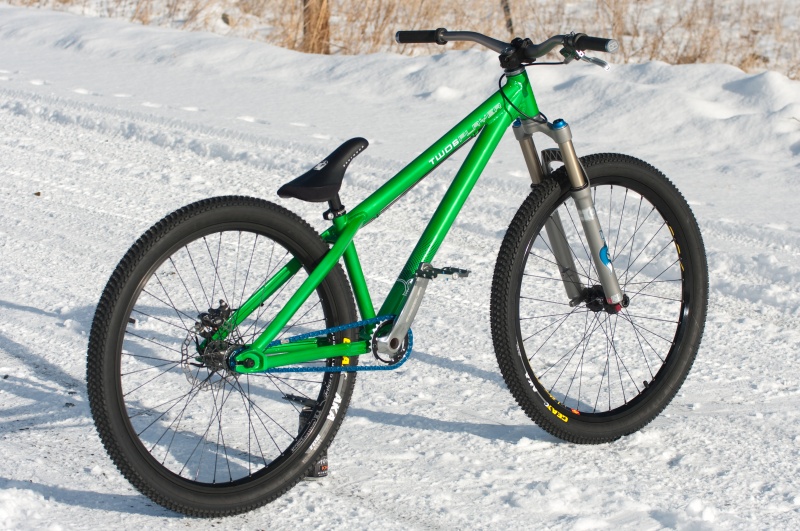 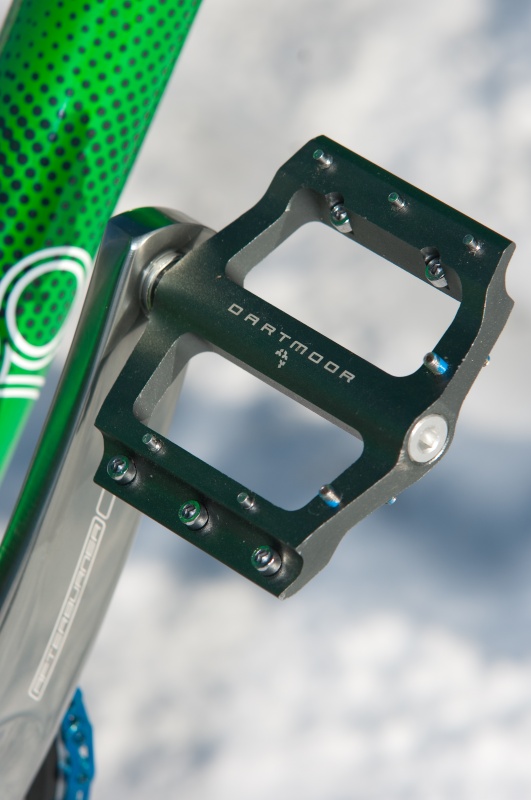 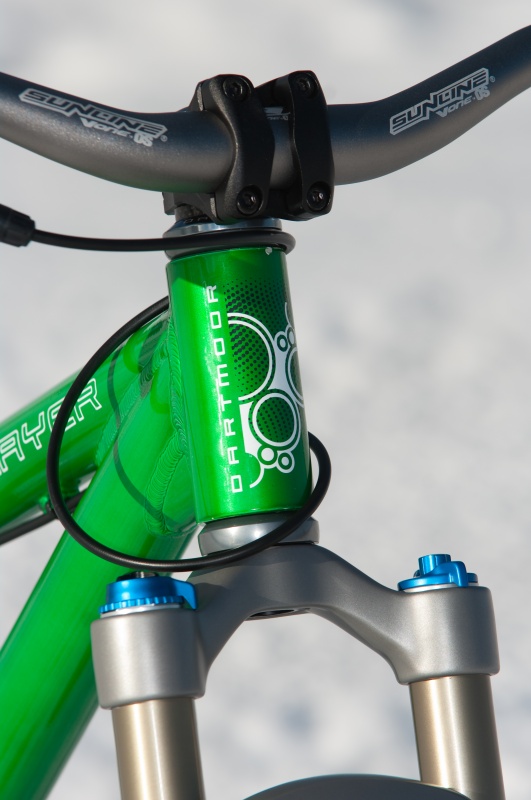 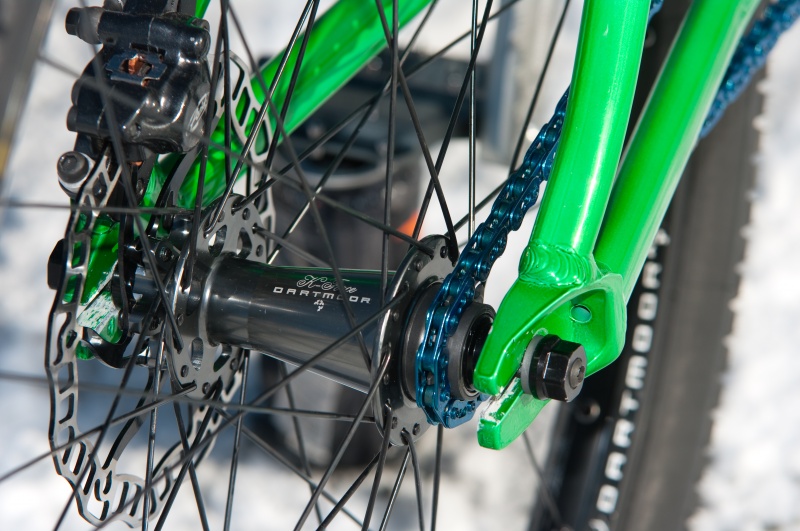 mrbombsquad (Jan 7, 2010 at 1:07)
That is one light bike that mist be amazing to throw around... And I bet those pedals shed mud like no other

Ayanami (Jan 7, 2010 at 8:04)
Nice but unfortunately anyone who takes a closer look at this company will see that they are a catalogue brand that takes parts from the taiwaneese 7-11 and then sticks their logo on... These guys really need to start making their own stuff to become legit...

o-l-a-v (Jan 7, 2010 at 4:04)
Dartmoor is the new NS, blackmarket, 24seven.. Yes, dartmoor is the new everything! Their products for 2010 is amazing! And this is the only aluframe i have ever liked (Two4player aswell offcourse)! Dartmoor bikes, you own! Keep the progression! Looking forward to build my Cody

My bike has the 09 fevers- slightly thinner and they out preformed my Dark cycles arachnid.

you can also check out Dartmoor related talks on www.rotorburn.com under the 4x/street section.

seventy8abuse (Jan 7, 2010 at 6:30)
i love those pedals, really clean design. just one point - what if you smash a pin?? it will mess up the threads removing said smashed pin making the fact that they're replacable, pointless..

never-stop (Jan 7, 2010 at 6:40)
ye but my freinds done it on his pedals few times cuz he grinds the pins looked all fucked but with abit of forcing the bolts came loose and can replace easy, so i dont think its much of a problem, i could be rong tho...

sethius (Jan 11, 2010 at 1:44)
Hope it goes well for you twoSIX: A majority of my do-it-all bike is Dartmoor and it's been great. From the wheelset to the guide to the scandium bars. Will be putting the funky stem on come late feb.

Oh and enjoy the pedals: I went from the Dark cycle ara's to the fevers: much more comfortable for a pedal not being used for the ultimate grip situation.

StuartParker (Jan 7, 2010 at 9:13)
Yea noticed it my self but an amazing build would love to have it.
See how the hose is rapped round the head tube once is that for being able to do double bar spins without snaping the brake hose?

Had no issues with dartmoor stuff in australia from street to downhill use.

mtmassive (Jan 8, 2010 at 12:48)
that video is too healthie, he has a great relaxed style and makes everything look effortless.

smeckma (Jan 7, 2010 at 6:14)
If you click on English (upper right corner) it all reads well, but I haven't been able to find that particular model yet. The one I came by was an aluminium frame whereas that one is a Cromolly one. Maybe it is the old one or something and it'll be some time until they gonna put it on display. I like the frame though.

smeckma (Jan 7, 2010 at 6:39)
I am a little bit confused now. It looks like Cromolly, but those weldings, after close inspection, look like it was an aluminum frame instead. Now, I am not sure.

scrippsranchDJ (Jan 7, 2010 at 4:25)
Did you try going to the link supplied in the article? See if they say under distributers or something on their website.

morewhitenoise (Jan 7, 2010 at 7:56) (Below Threshold)
this frame isnt the same as the one pictured on their website, this one looks like steel to me.

streetlover (Jan 7, 2010 at 15:20)
it funny because in the bike check it say front rim dartmoon but in the picture it a mavic

twoSIXplayer (Jan 7, 2010 at 15:27)
That's because the build I have now is with the Dartmoor rim but it just wasn't built in time for this shoot.

dart-bikes (Jan 7, 2010 at 15:31)
Cause new front wheel is under construction as I know. So photo is still with old one but bike check is already showing new wheel

dawids (Jan 7, 2010 at 17:43)
dartmoor sucks.. every product ive had from them last half the life as other brands... rode a bar setup from them.. lasted me a month before snapping while doing a 3 off a three set. Weak.

johnTwright (Jan 8, 2010 at 18:07)
how do i get that stem on thewebsite they say they dont ship well i think thats what it said