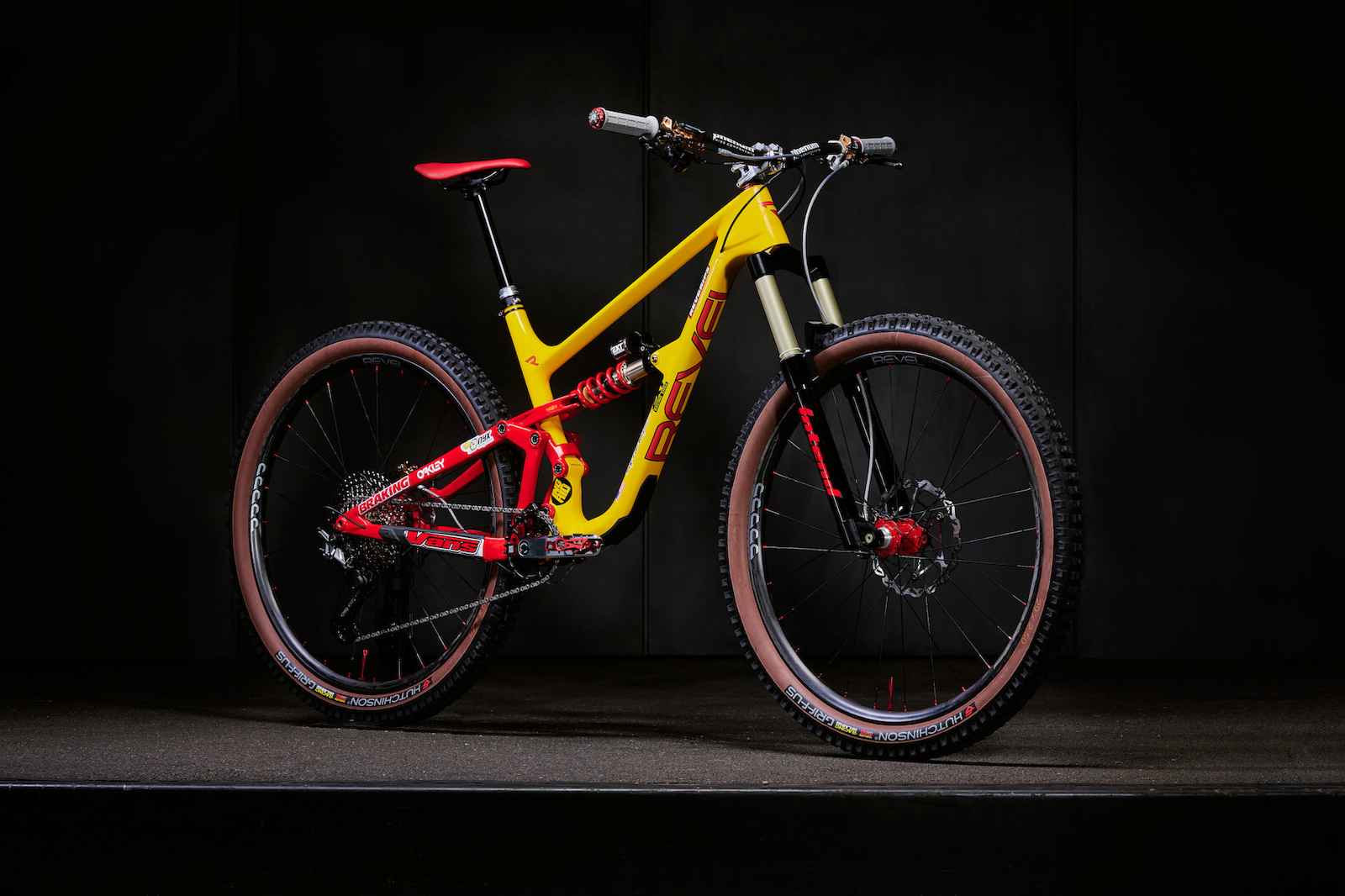 This time Marc Wohler took inspiration from 90s downhill racing as he sees this as the golden age of Downhill. There were no shortage of crazy bikes to choose from but he eventually settled on Shaun Palmer's 1995 Intense M1 as the template for the custom build. Stefan from Cycleworks helped creat the incredible paint job and retro stickers that really complete the look of a 90s rig. While the bike may be designed to look retro the spec is full of boutique and prototype parts from carbon Ceetec bars to Ingrid cranks and cassette. Marc suggests listening to some Rage Against the Machine to get the full effect of the retro styling. 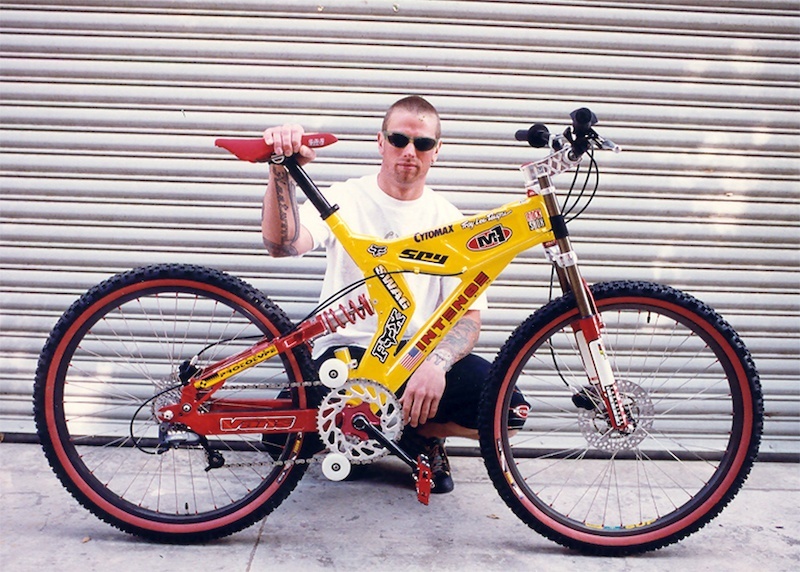 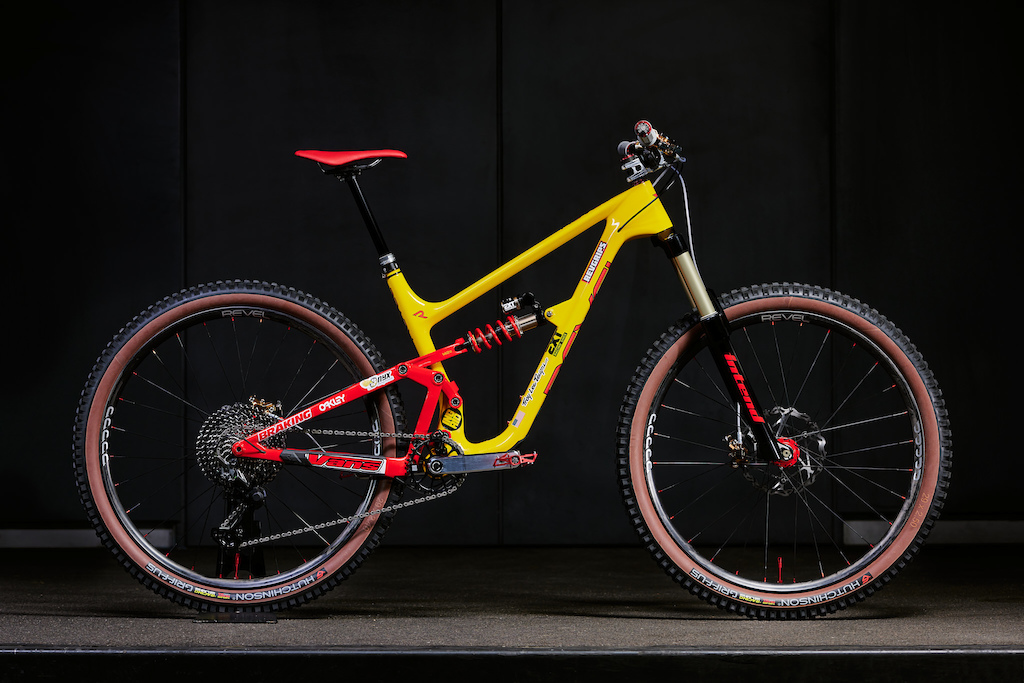 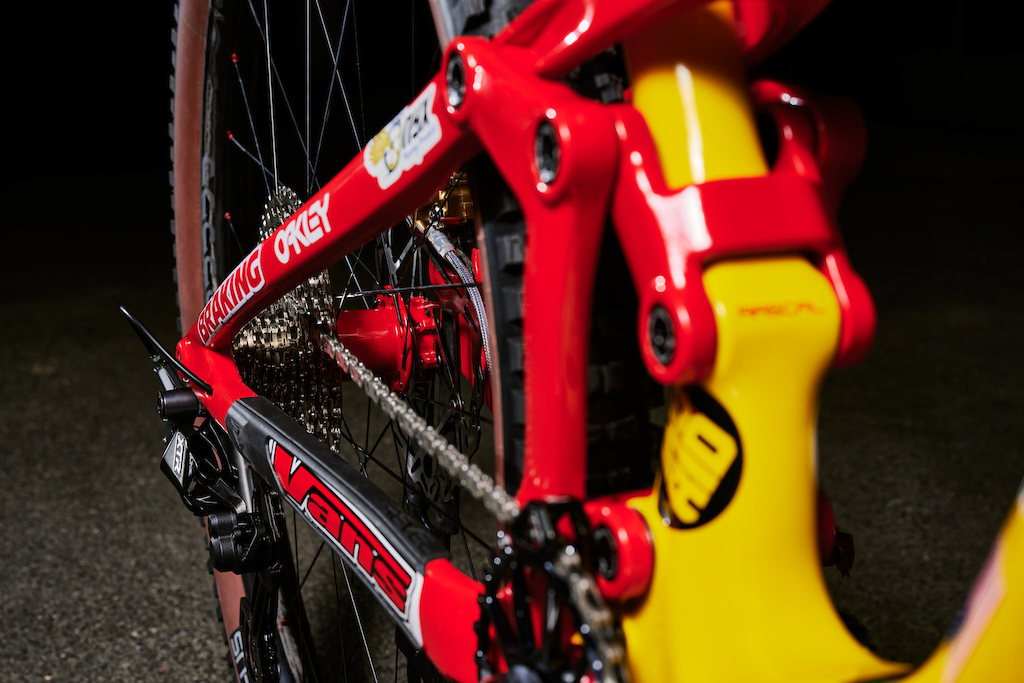 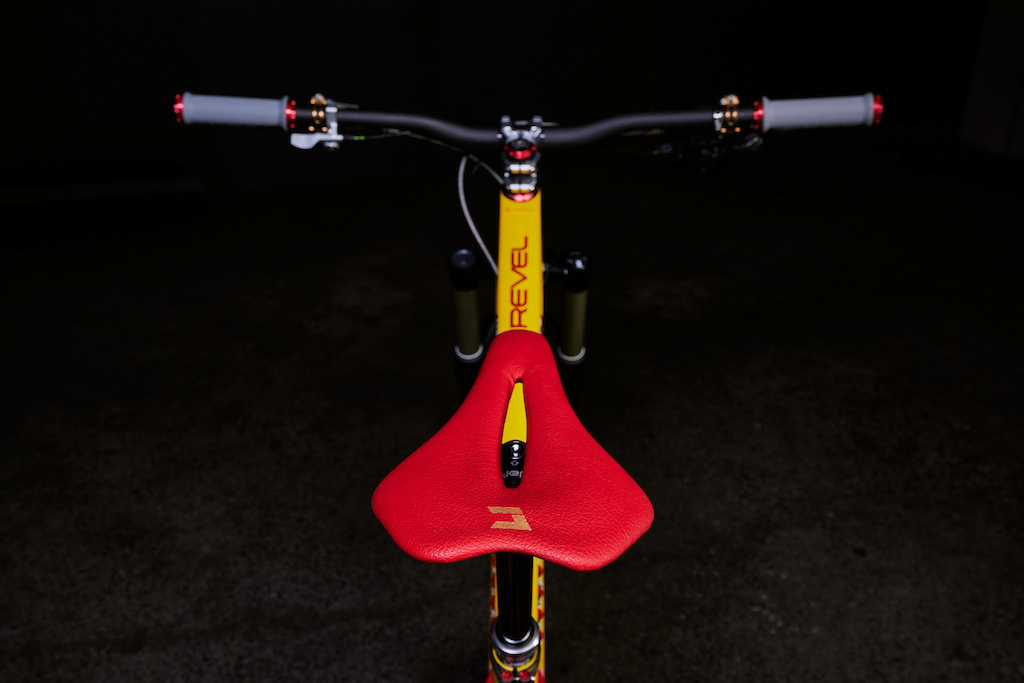 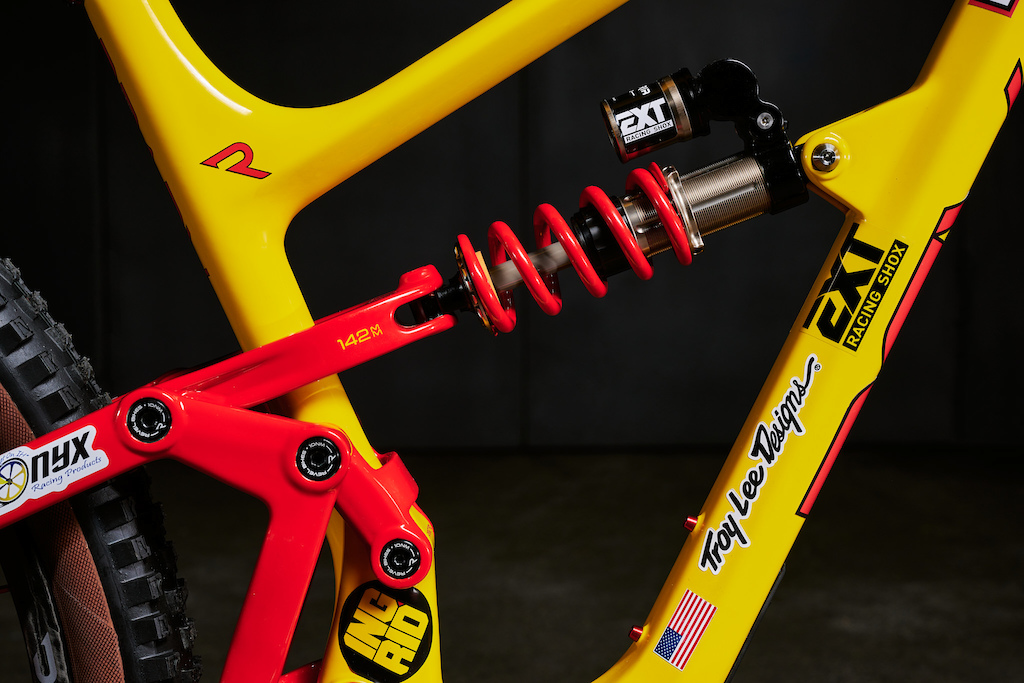 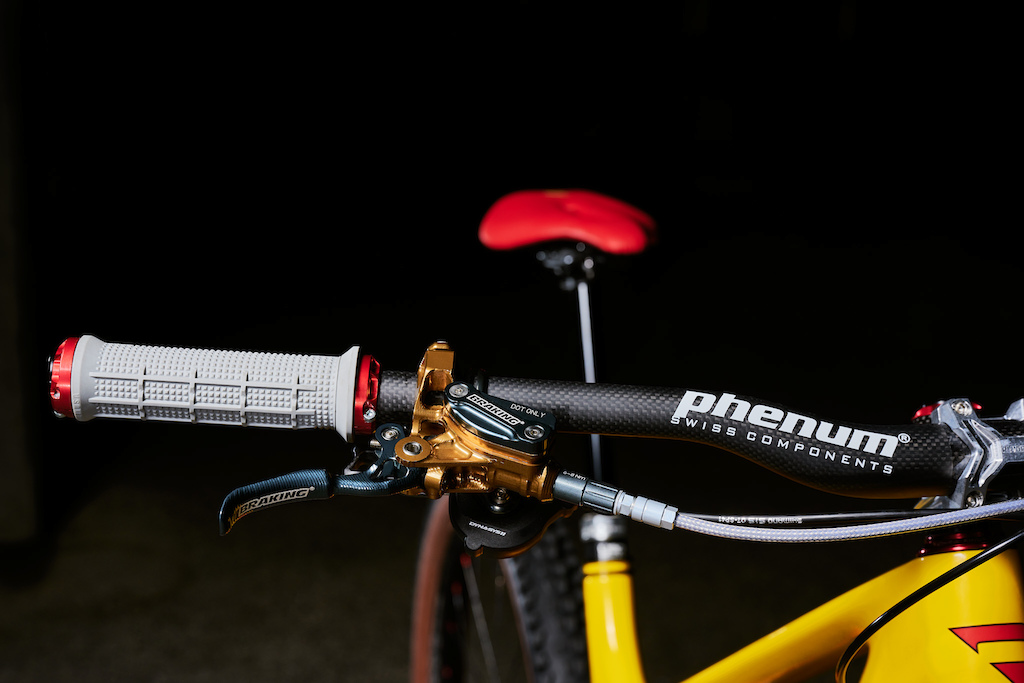 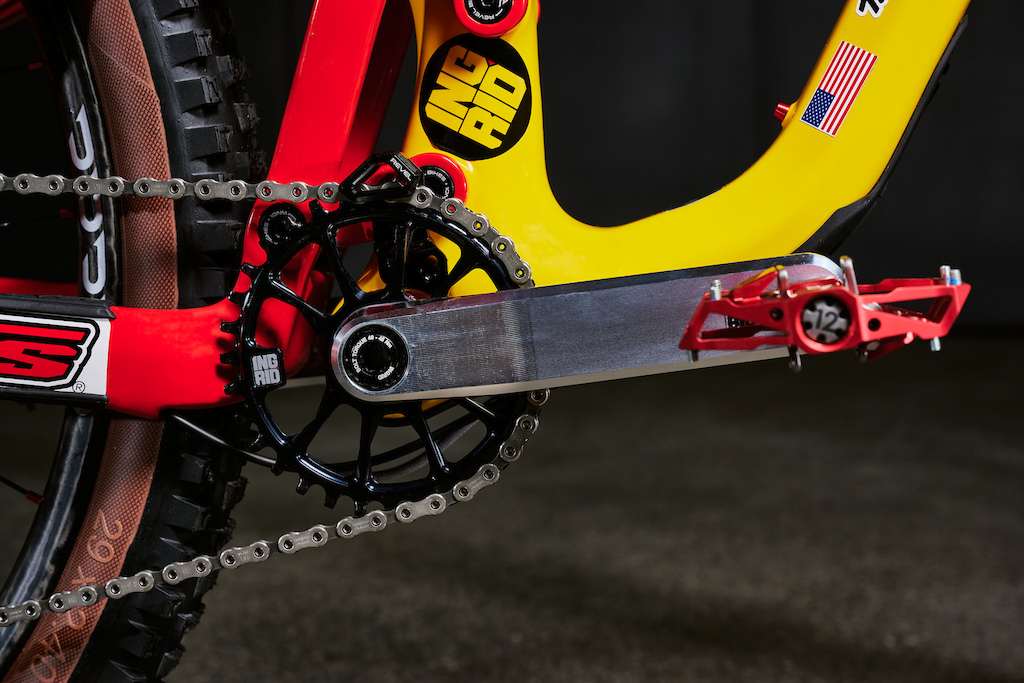 There is no shortage of top level componentry with Phenum, Ingrid, Ceetec and Braking featuring on the spec list 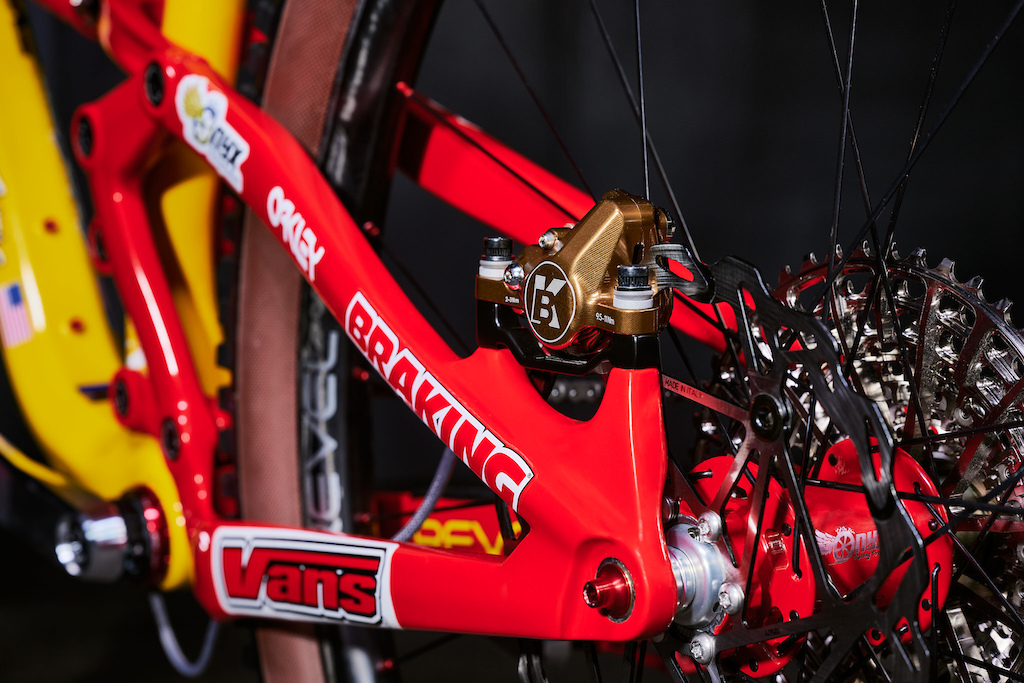 The attention to detail is great and this vintage Vans sticker is a super-cool addition. 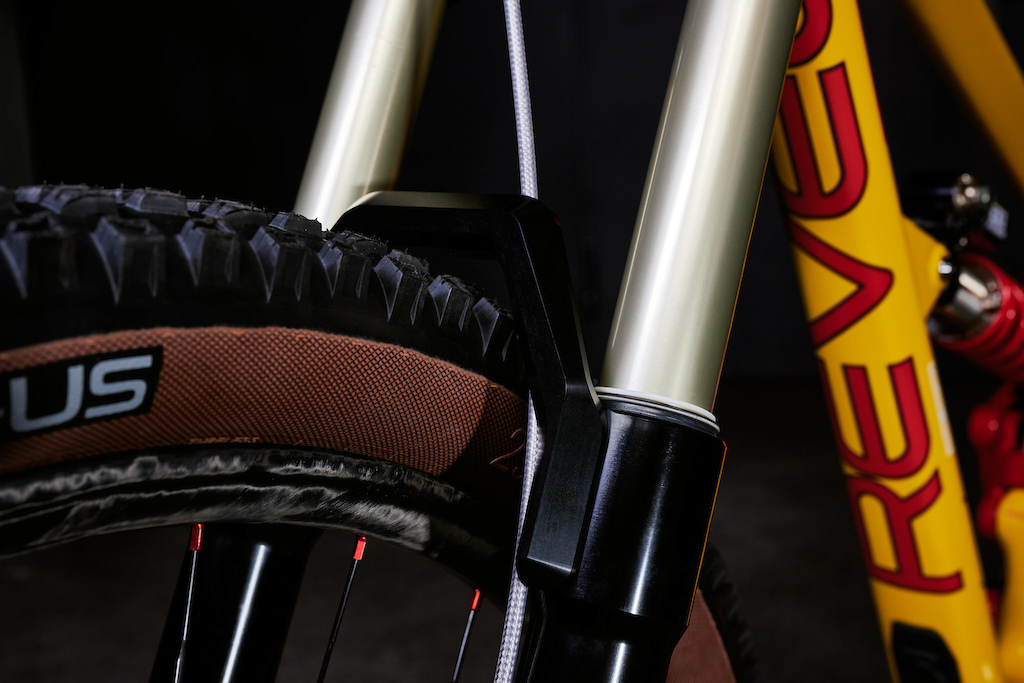 A second look in a week at the incoming Intend fork. Full details are apparently coming next week. 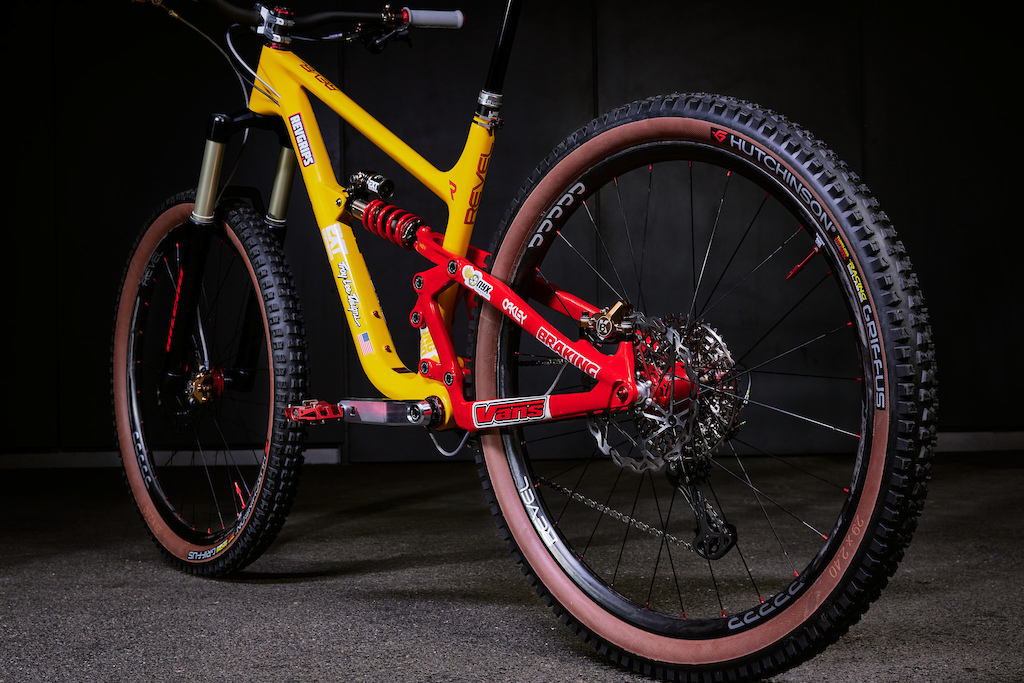 The retro paint job and stickers look great from every angle 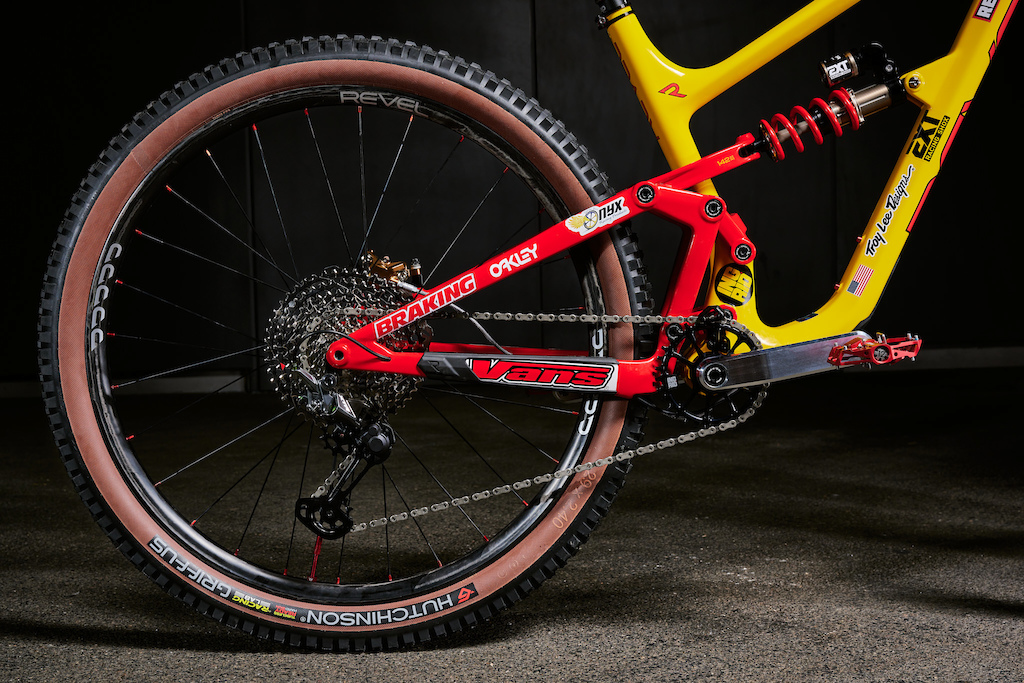 So old they're new, the tan wall tyres are both a retro throwback and a modern touch. 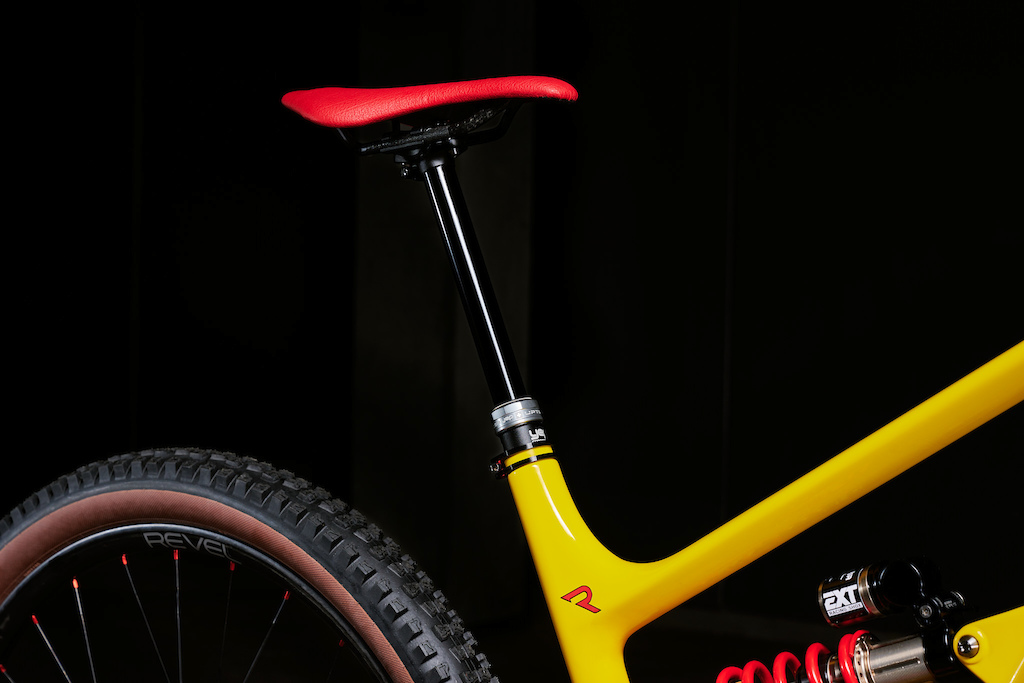 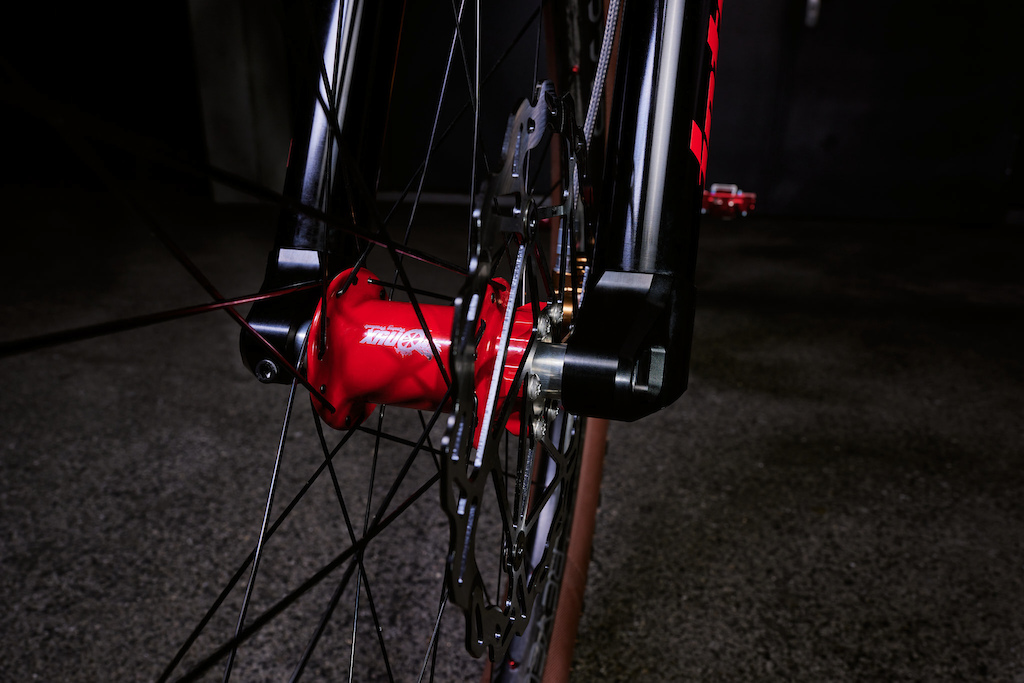 The Revel RW30 rims have been laced to ONYX Racing Products Classic Hubs which will run silently for those who prefer not to be deafened by the hubs. 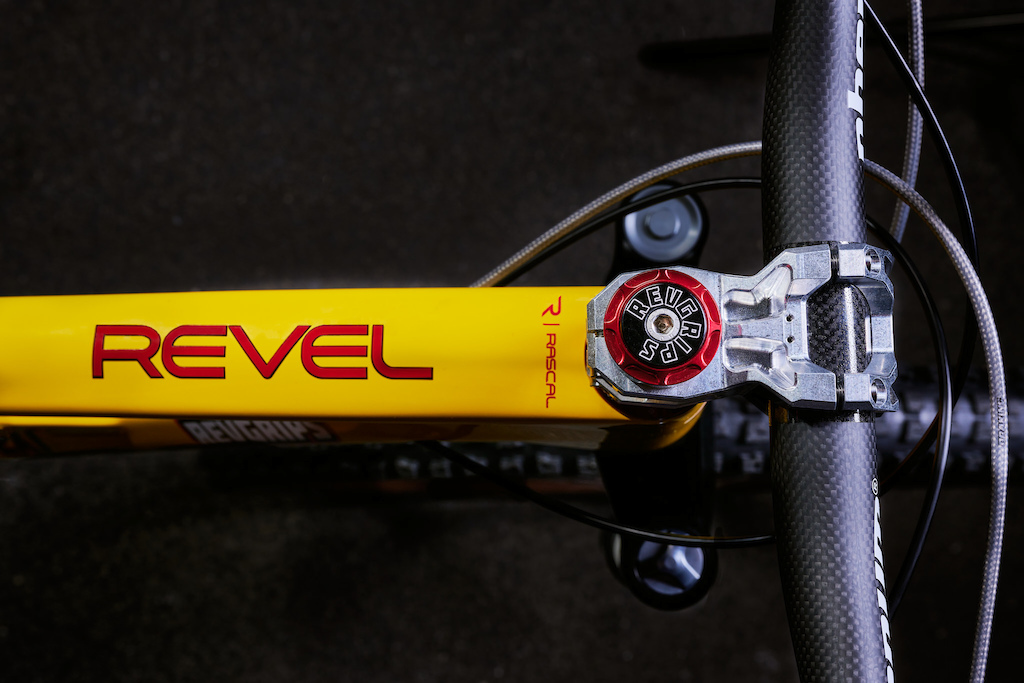 Marc has chosen a custom Raw coloured for his 50mm RevGrips stem. 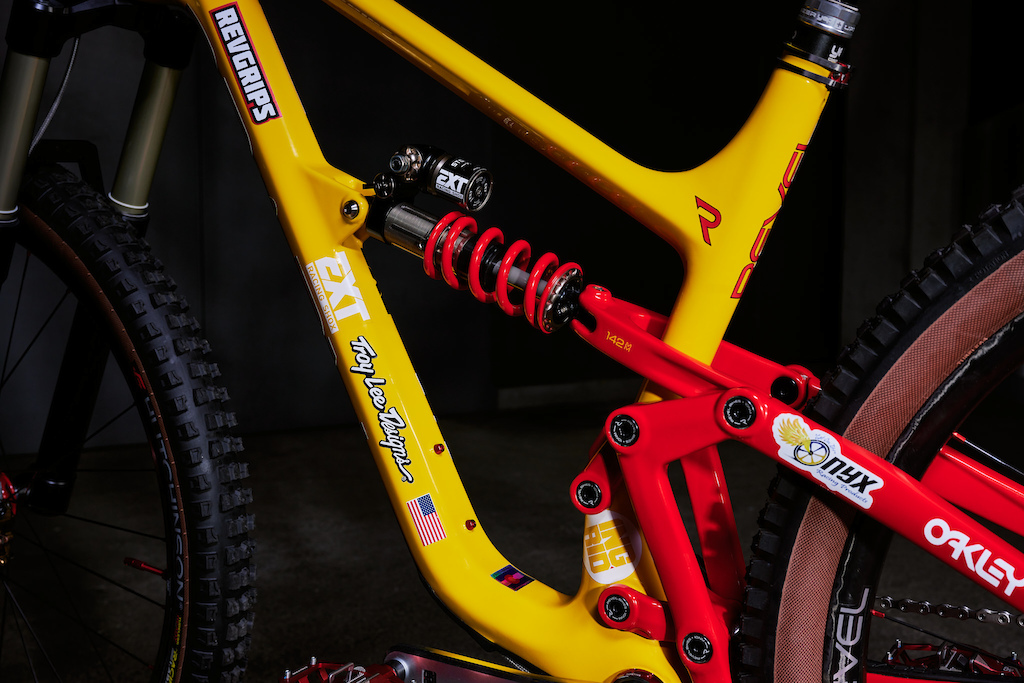 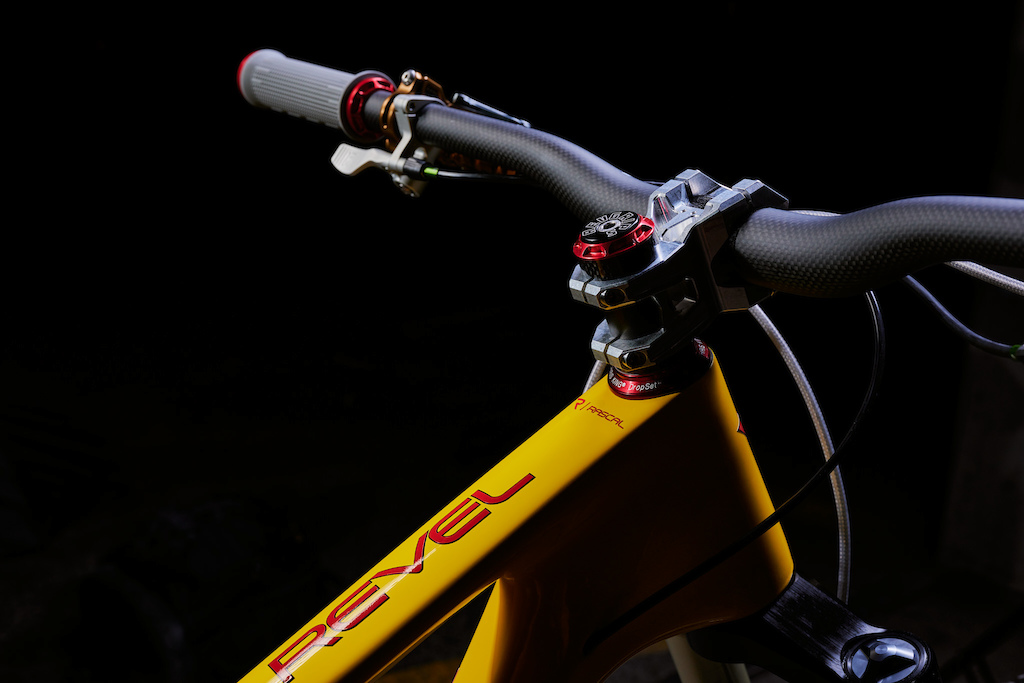 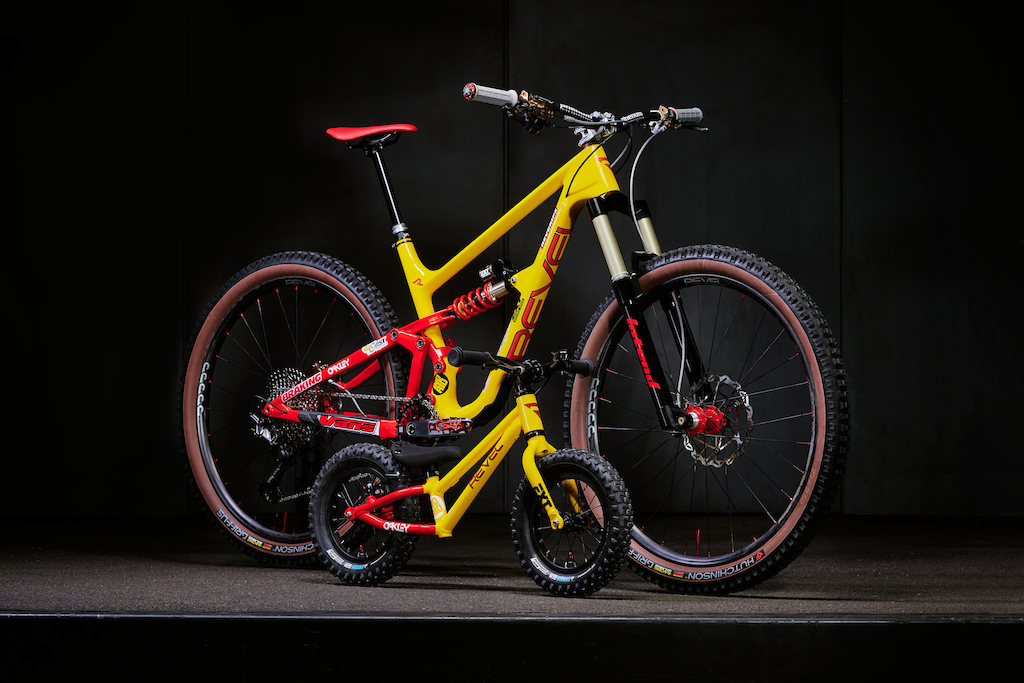 Marc even designed a Mini Me verison too.

tpg512 (Sep 7, 2020 at 8:42)
idk if that mcdonald's reference on the second to last picture was intentional or not but i appreciate it either way

LittleDominic (Sep 8, 2020 at 12:18)
@drunknride: he entered skier cross and won that too, cause that’s how Shaun Palmer rolled back then.

laflam10 (Sep 10, 2020 at 9:11)
@LittleDominic: I worked at Mt Snow during those X games. I watched him cross the finish line for Skier Cross. it was pretty awesome seeing that.

This fork is a cnc-machined dream out of 7075 aluminum and probably the best fork you can buy for money. The result of 5 years of experience of suspension technology. The result is the Ebonite fork. It can take any loads you submit it to. The friction of the whole system is as low as possible, the best seals and air spring design are combined with a chassis made out of high quality 7075 aluminum. Bolted together with high strength stainless steel bolts.

Features of the Intend Blackline Ebonite:

shotouthoods (Sep 7, 2020 at 16:41)
Funny Shuan and I have the same haircut today and I was listening to Rage Against the Machine’s CD last week really loud. Kids you can look up what a CD is on google and then just for fun look up Albums or frisbee.

DidNotSendIt (Sep 8, 2020 at 8:42)
Talking of RATM... Been having my own musical nostalgia trip playing the remaster of Tony Hawk Pro Skater. Played it for two hours and could only think in Superman by Goldfinger.

str8dwn (Sep 7, 2020 at 21:22)
I don’t get the connection to Revel and Shaun. It’s a mid-travel trail bike that has nothing to do with DH or Intense. It would be like Tesla putting a Porsche Gulf livery on the car for nostalgia. Though at least those Gulf colors would be more pleasing. Yuck.

SimonD (Sep 7, 2020 at 13:11)
As someone who owns a few Intense bikes, I agree. It's just a pity that bar their current gray/red colour schemes, the rest of them are f***ck ugleee. Give us good paint schemes Intense! Please!

Blackers (Sep 8, 2020 at 9:51)
@SimonD: Not just Intense with the drab colours, Ibis and Santa Cruz also need to revisit their colour schemes IMO.

I love that Norco let you customise framesets!

bigtim (Sep 7, 2020 at 8:40)
Having been riding throughout the 90's I've always loved the old intense bikes, but even at the time I thought they looked like they'd been ridden into the back of a bus.

DavidGuerra (Sep 7, 2020 at 10:44)
Wow, love it! Don't know how kids feel about this, but for those who went through the nineties, something like this triggers something... Looks like the real deal...

. But it reminds me of some bikes that were around in 2000, there was maybe a cheap yellow Massi with a flattened downtube like a Trek... Not sure anymore. There was a cheap yellow Giant too, with thin tubes, there was of course the Hot Chili one... I mean from the yellow colour...

hllclmbr (Sep 7, 2020 at 8:51)
@mi-bike: A friend of mine bought a 4 color Picasso lithograph at an estate sale for less, but it's since been appraised at six figures.

BenTheSwabian (Sep 7, 2020 at 9:07)
First time we get to see this new fork with actual Intend branding. There was speculation about this new fork being developed for the Trickstuff brand.

DutchmanPhotos (Sep 7, 2020 at 8:47)
I think the photos don’t do it justice... Probably looks way better in real life and a set of blackwalls would make it even better.-

I didn’t want to say but okay, you said it. Haha!!

vinay (Sep 7, 2020 at 23:35)
With all the Vans stickers, this bike would deserve some flat pedals. Other than that, of course the bike looks amazing!

vinay (Sep 8, 2020 at 7:39)
@flowriderracing: Ah, never realized they make those too. And now I notice that the original bike in the picture also seems to have red spd pedals, so the replica is quite fitting actually. My bad!

Sshredder (Sep 7, 2020 at 10:53)
Pastels from the 70,s are the current look for most bikes. Boring! This looks wicked! Shaums brought cool to the sport. I think he works for Intense now .

flowriderracing (Sep 10, 2020 at 3:49)
we only use a shock with more stroke to get more travel. But the warranty will expire with this tuning no new model or something like this.

bikerboywill (Sep 7, 2020 at 13:43)
Good to see they’ve kept the seat tube angle the same to really capture that retro vibe

tobiusmaximum (Sep 10, 2020 at 22:22)
@mxmtb: yeah, I’ve been in mtbs for nearly thirty years. He came along at just the right time lol. Maybe we’d still be wearing a mix of ski gear and xc gear if not for him.

(Not really, but you teed it up so I just kind of had to.)

PHeller (Sep 7, 2020 at 10:03)
Im not quite getting this. Pinkbike doesnt feature every bike a shop puts together with a wild colorway, why this one? Is Revel paying Pinkbike to do these features?

jomacba (Sep 7, 2020 at 11:58)
Likely because this sparks some serious nostalgia for alot of riders. I remember sitting at home with the intense catalog (paperback version) staring at the intense M1 dreaming of owning one.
That bike was all around badass. Maybe there are other bikes that make people feel that way, but that bike was truly iconic.

dirtybikejapan (Sep 7, 2020 at 13:24)
Come on dude this bike and the last one they featured had a bunch of very rare/ still prototype parts. This one also rocks a Palmer style custom paint job, with crazy rare parts too. It is not exactly like a stock Kona with the grips swapped out.

Can Pinkbike not simply post up a cool bike with some nostalgic roots?

Does it make your day better or worse?

I suspect worse, based on your comment - which means you should really check you wiorldview, right?