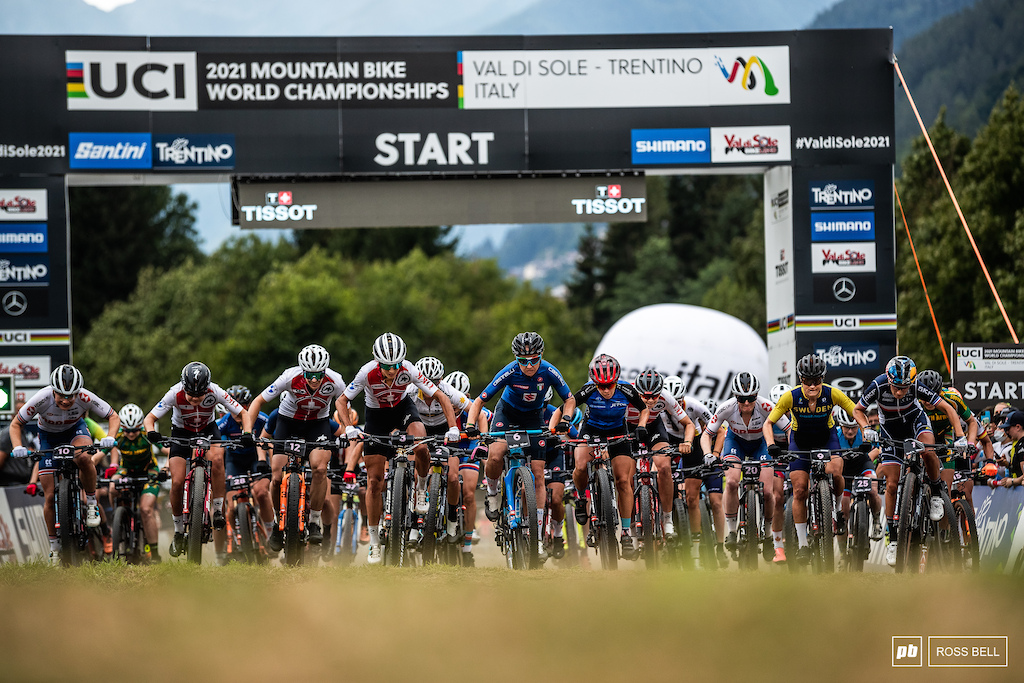 The results are in from the 2021 XC World Championships in Val di Sole. In the U23 racing, Mona Mitterwallner took an incredibly dominant win to pull ahead of Laura Stigger by over two minutes. Crossing the line a further one and a half minutes back was Caroline Bohe in third place. The U23 Men also saw a big win as Martin Vidaurre Kossmann finished the race with just over a minute on Juri Zanotti.

In the Elite Women's racing, Evie Richards takes the rainbow stripes after an incredible performance. Evie leaves Val di Sole with the rainbow stripes and a silver medal in the XCC Short Track World Championships. Evie Richards has also become the first British woman to win the Elite XC World Championships. In second place, Anne Terpstra managed to fight her way to the front and crossed the line just over a minute back. After a close fight for third place, Sina Frei beat Jolanda Neff in a sprint finish for the bronze medal. Pauline Ferrand Prevot was very strong in the early stages of the race with a lead of 31 seconds after the first lap, but after falling back in the second half of the race, Pauline has to settle with sixth place.

Nino Schurter is back as he takes his ninth Elite XC World Championships title. Nino now holds the record for the youngest and oldest Elite Men's XC World Champion. Coming in second place was Mathias Flueckiger, who was wheel to wheel with Nino Schurter for the whole race. Mathias was bested to the line in a wild sprint that started just before the final downhill. Completing the top three was Victor Koretzky, the only rider to come within a minute and a half of the top two riders. 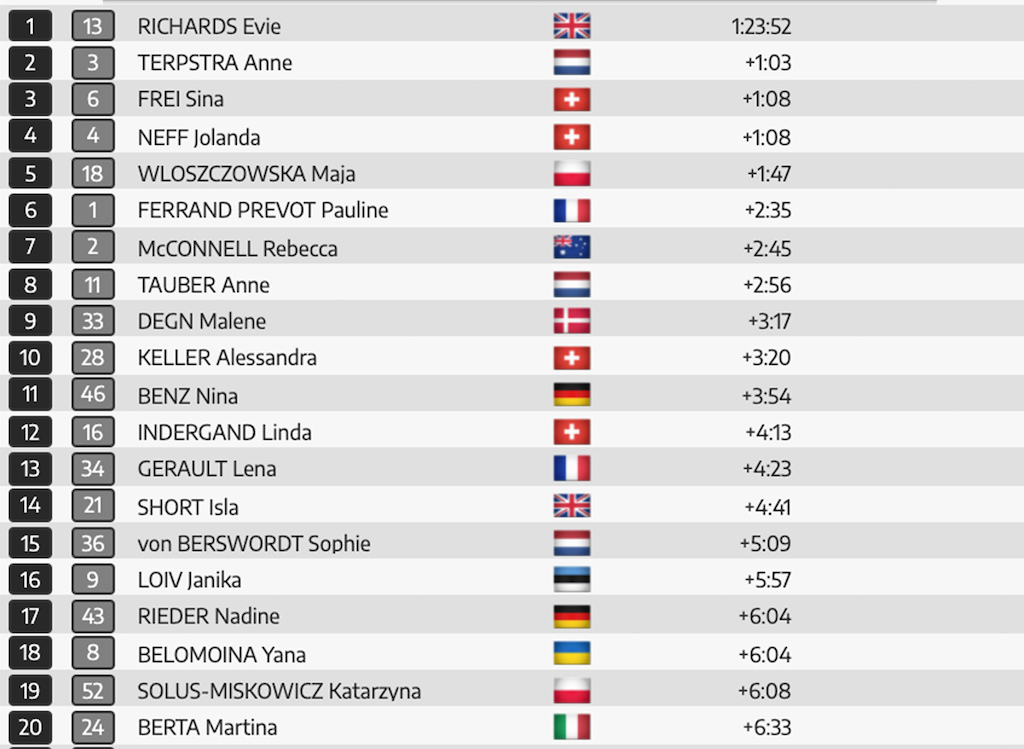 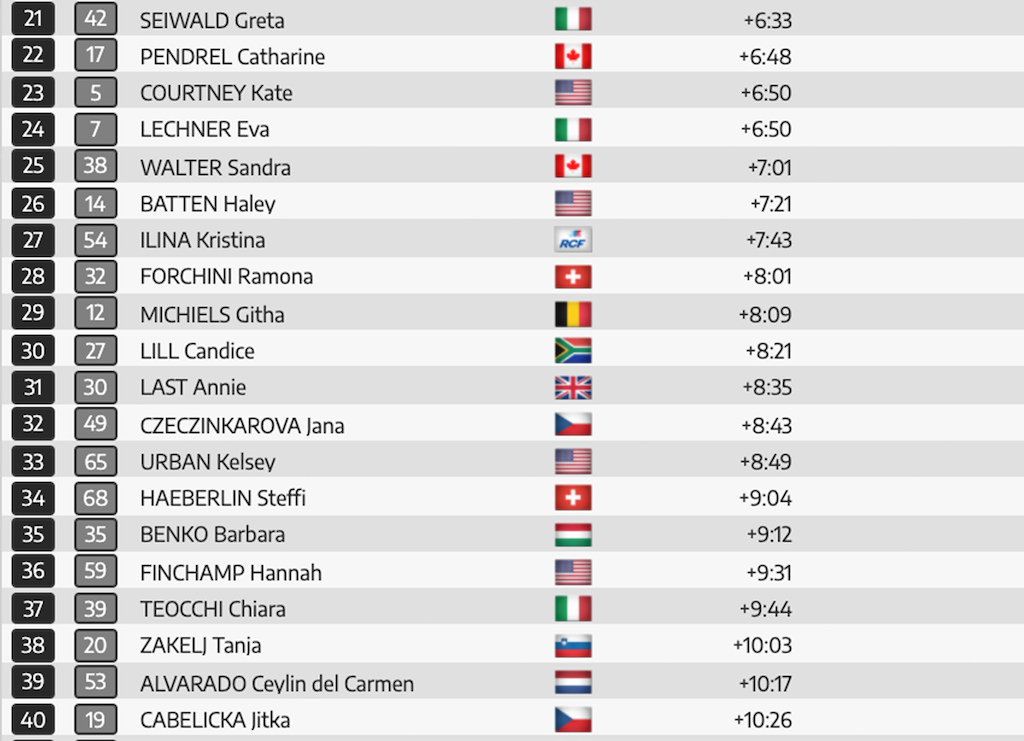 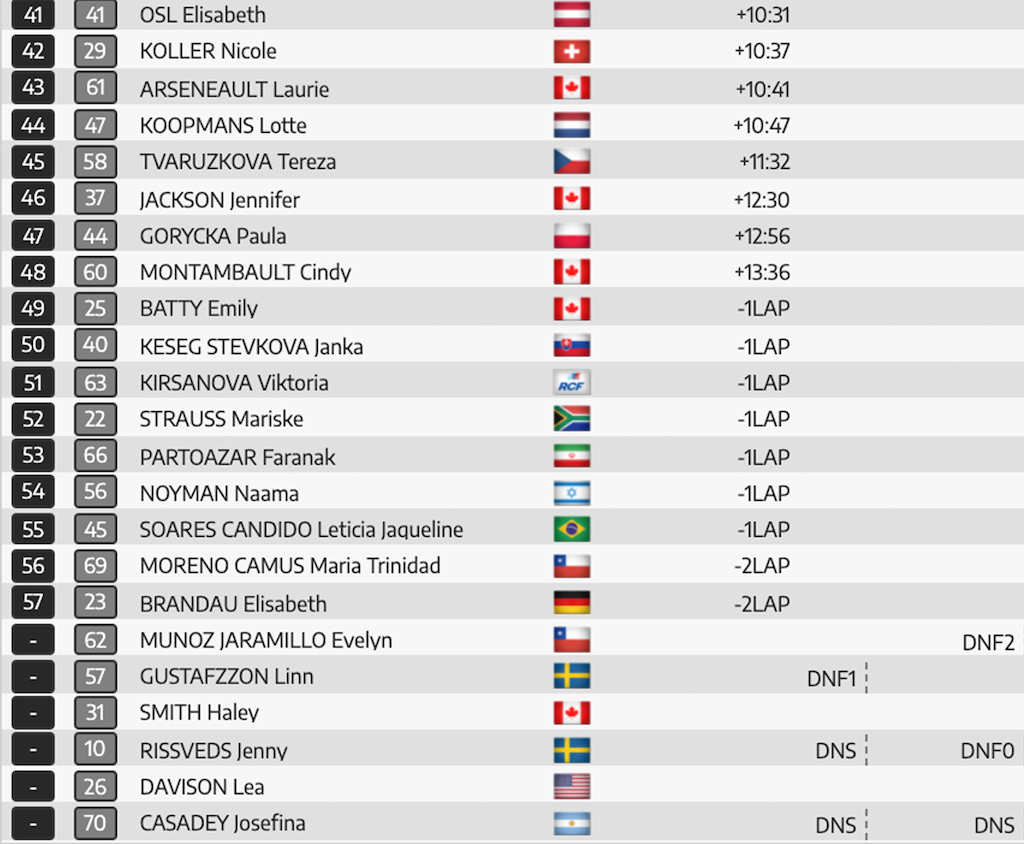 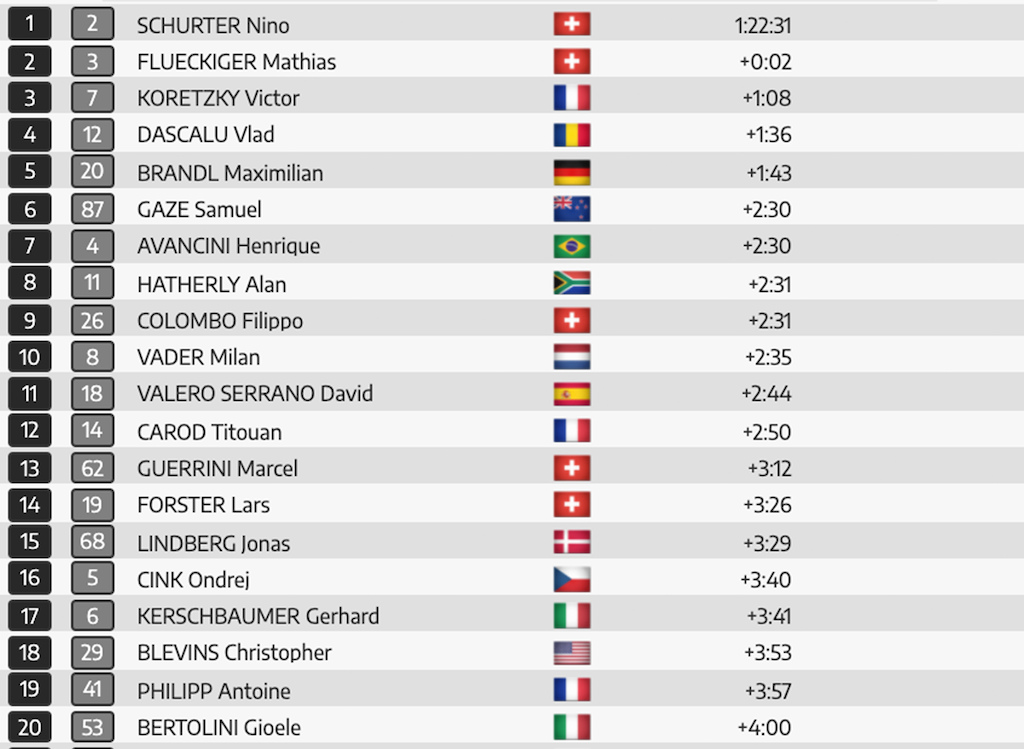 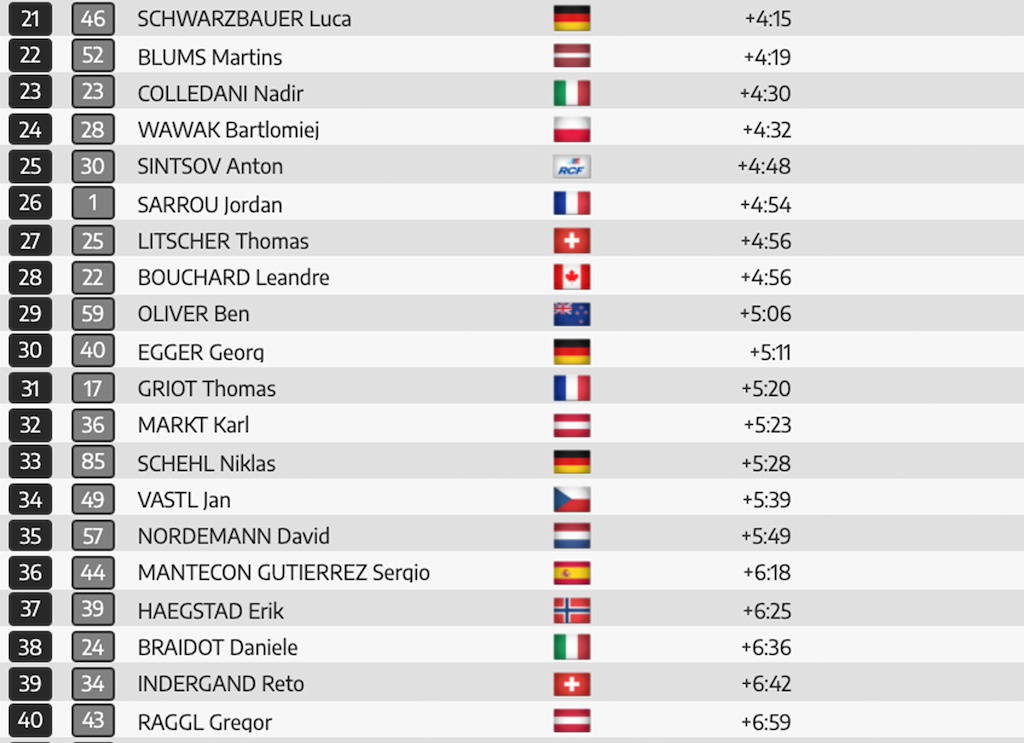 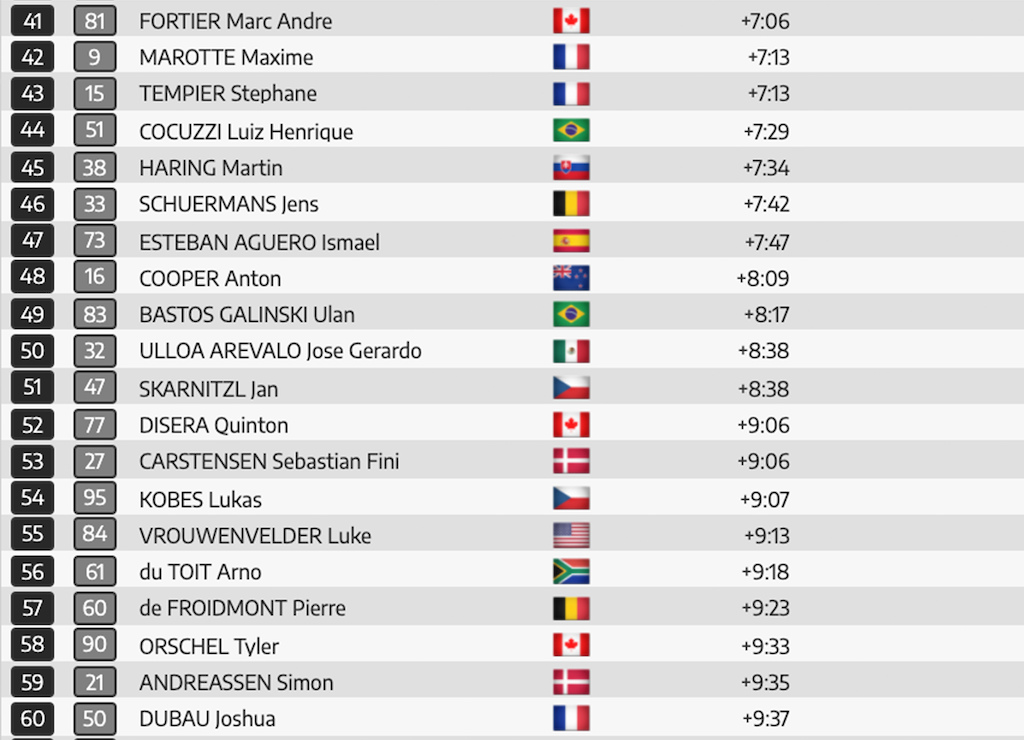 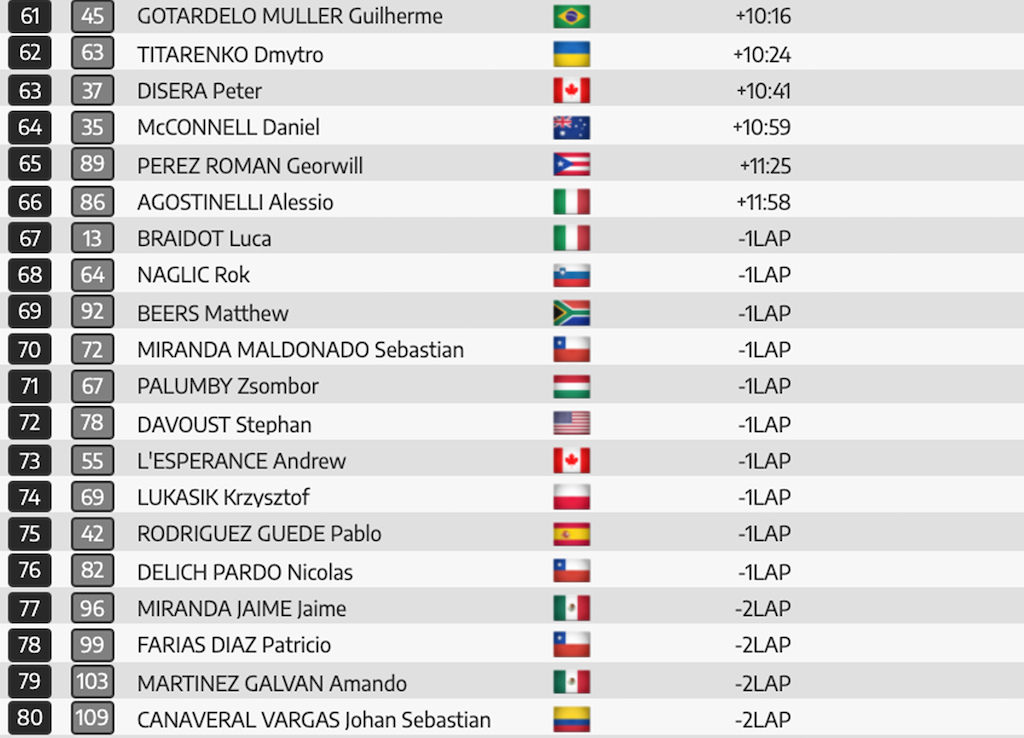 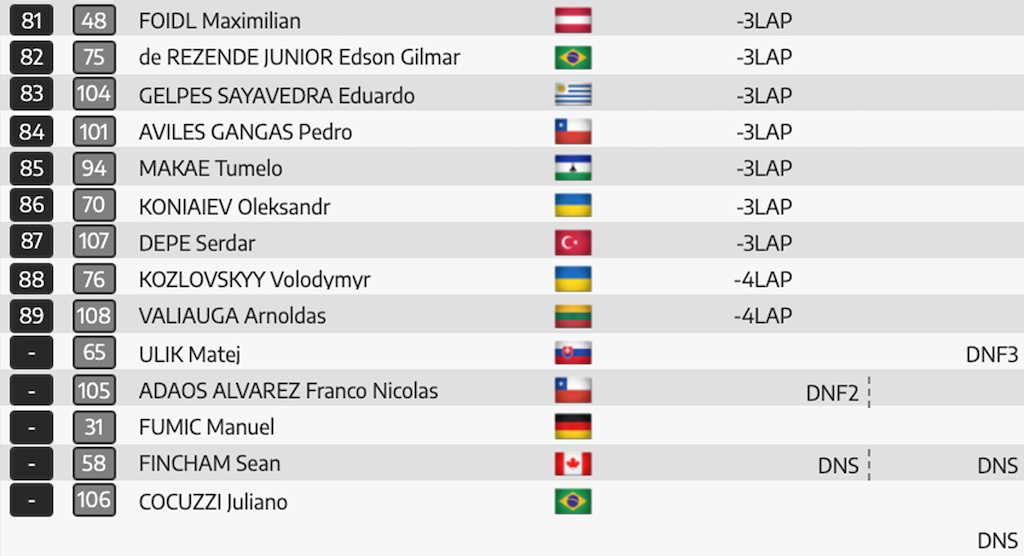 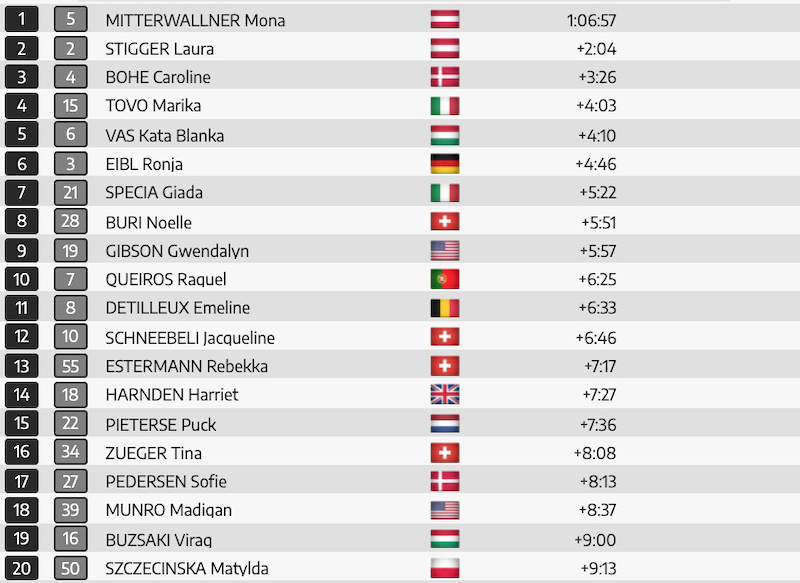 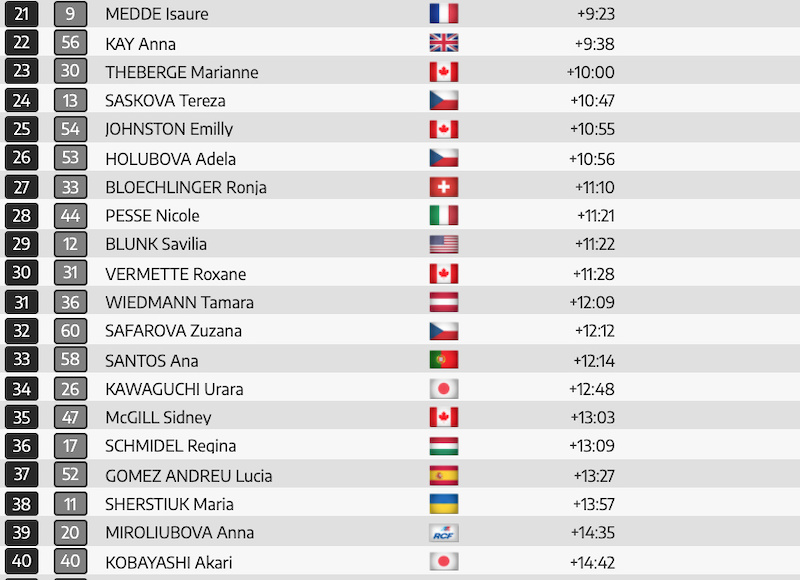 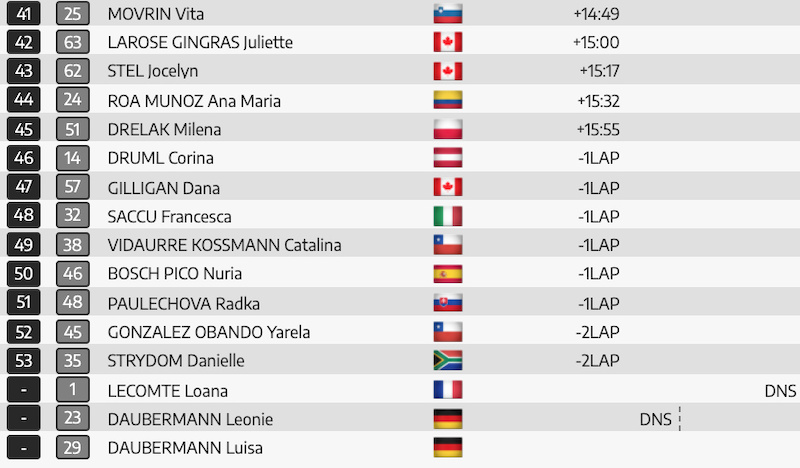 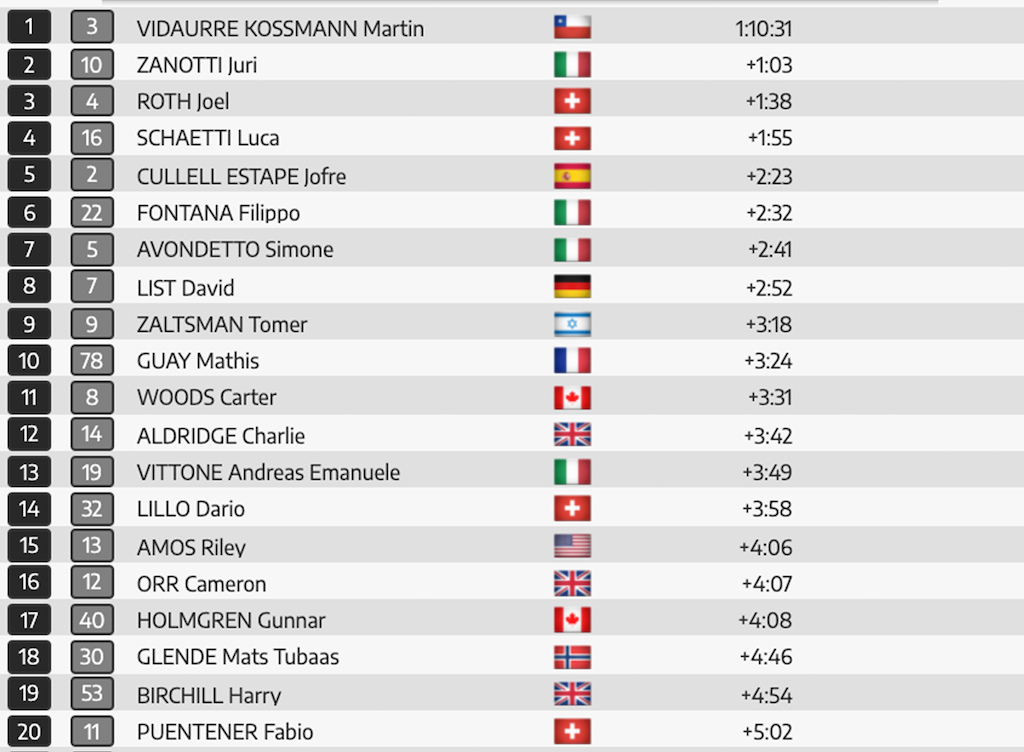 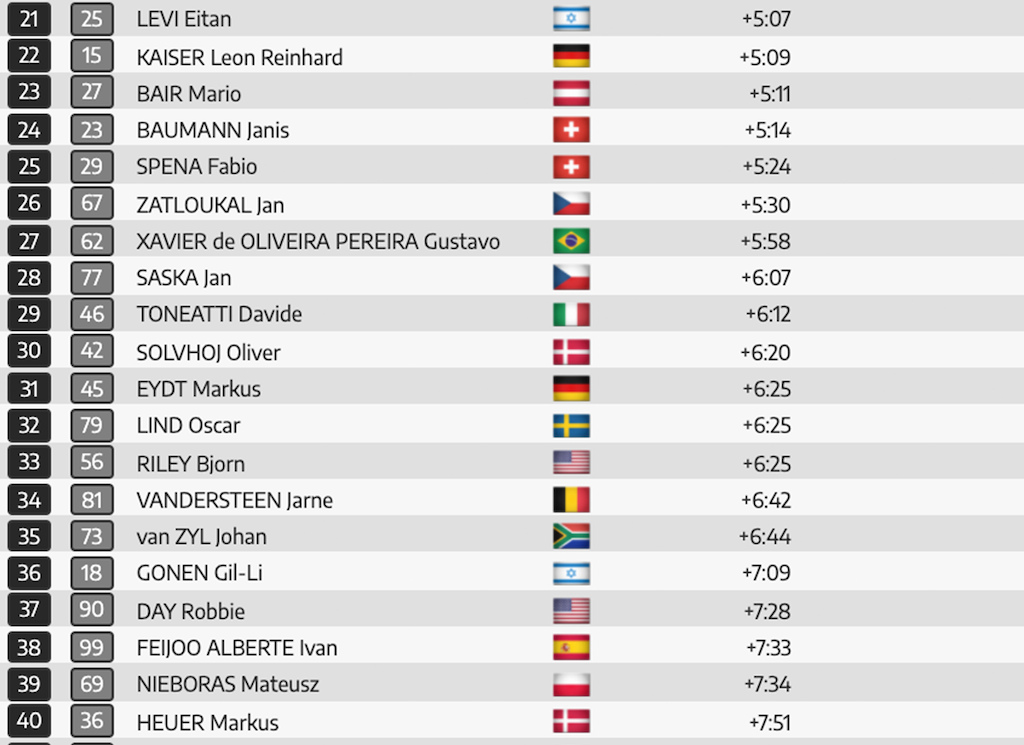 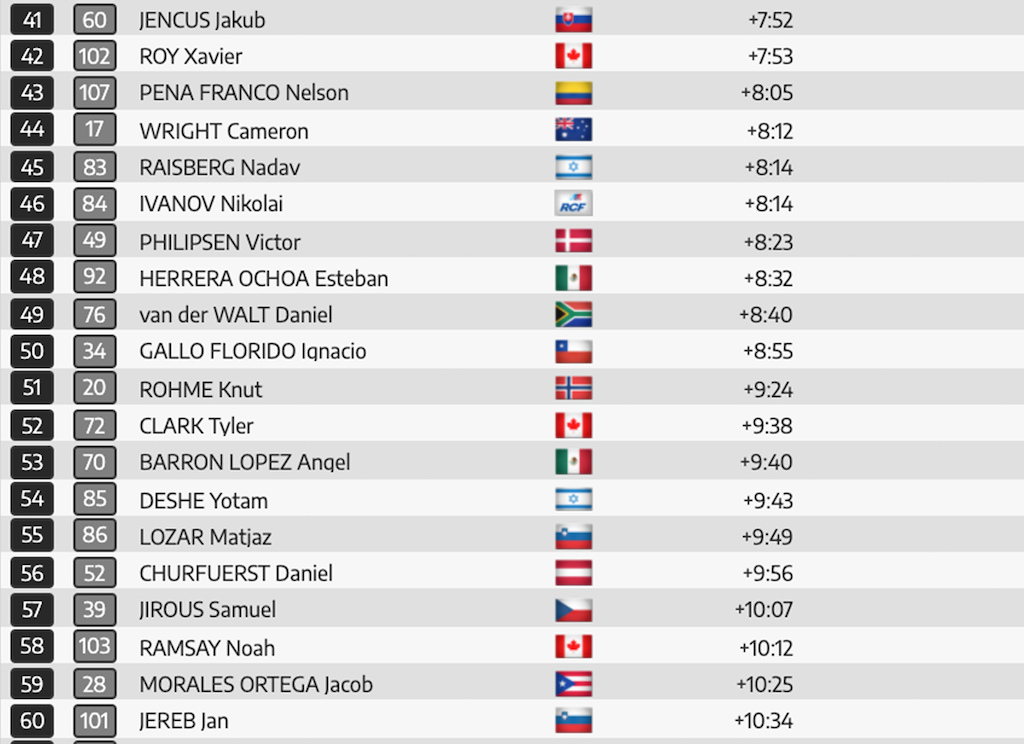 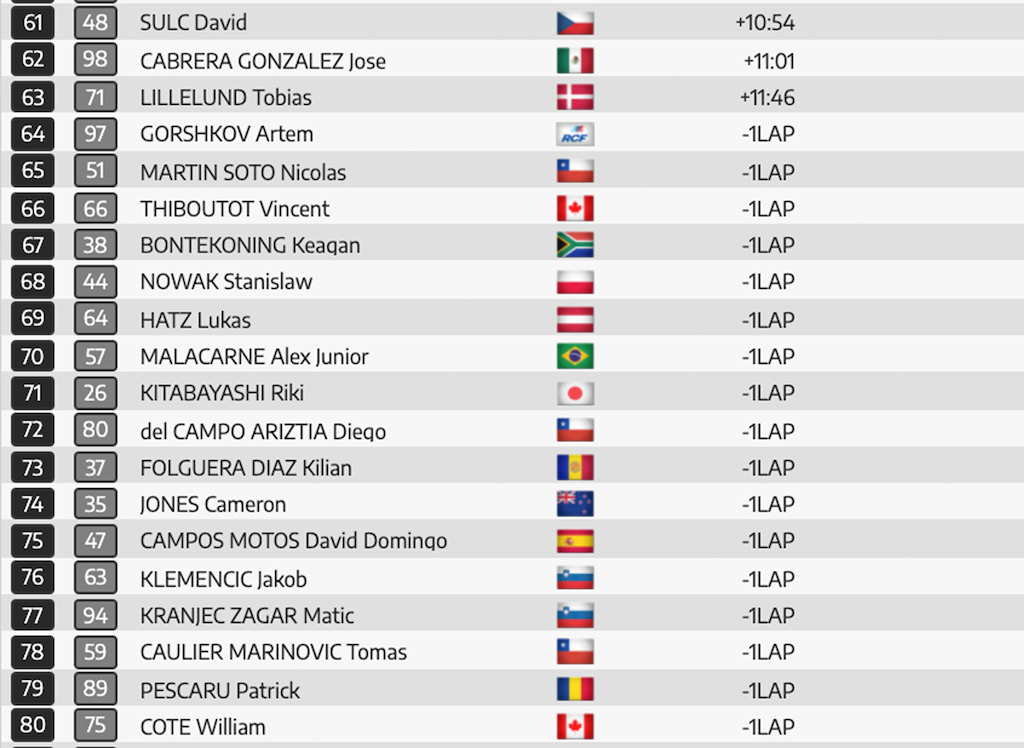 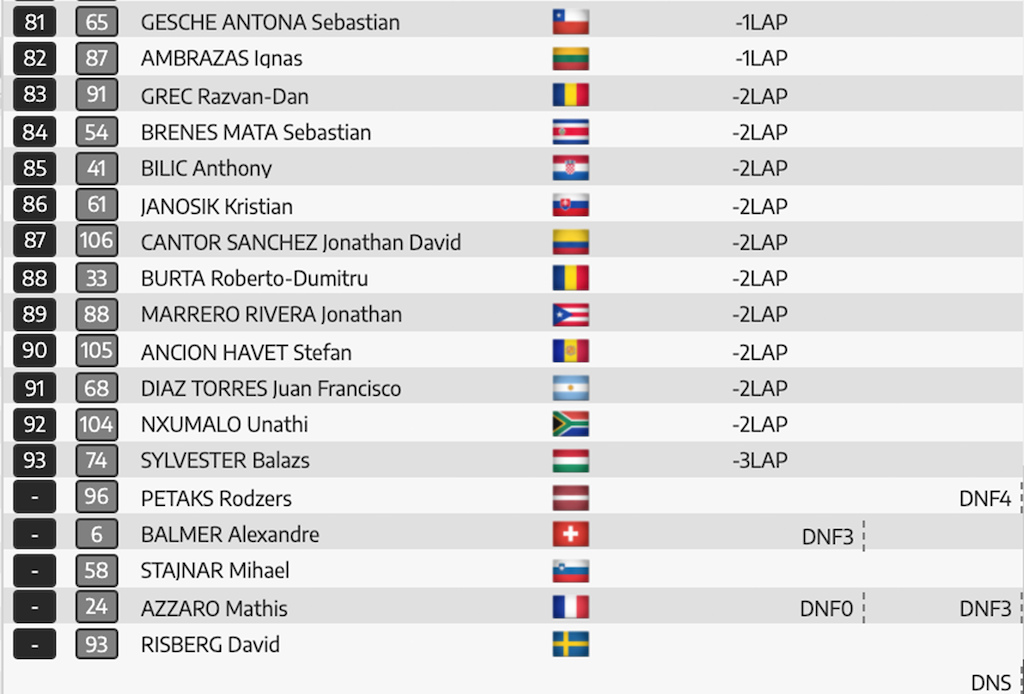 Mathias Flueckiger and Nino Schurter are heading into the final downhill, it looks like we are in for a wild sprint finish between the two Swiss riders.

Going into the final lap the top five Elite Men are:

A problem for Ondrej Cink as he runs up the climb on the second half of the lap. It looks like he may be having shifting problems.

Mathias Flueckiger has launched an attack halfway up the first climb of lap five. Nino Schurter has been able to hold on so far but Mathias will lead into the next downhill.

Victor Koretzky has now overtaken Ondrej Cink to hold the bronze medal position. Both riders are still around 40 seconds off the leading pair of Mathias Flueckiger and Nino Schurter.

After the fourth lap the top five Elite Men are:

The leading Swiss riders can't seem to drop each other as they are still wheel to wheel at the front of the race. Ondrej Cink is slightly closing in on the pair as the gap drops to 47 seconds.

Mathias Flueckiger and Nino Schurter are still pushing a rapid pace at the front as the gap to Ondrej Cink builds to 54 seconds.

After the third lap the top five Elite Men are:

After the second lap the top six Elite Men are:

The gap from Mathias Flueckiger and Nino Schurter to the chasing group has grown to 25 seconds.

At split one on lap two Nino Schurter and Mathias Flueckiger have built a 10 second lead on Victor Koretzky in third and 14 seconds on Ondrej Cink in fourth place.

On the first big climb of lap two it is Nino Schurter and Mathias Flueckiger who are setting a blistering pace.

After the first lap the top seven Elite Men are:

At the second split on lap one it looks like the chasing group has joined back up with Nino Schurter at the front to make a group of six riders at the front.

Nino is back! It has been a while since we saw Nino Schurter pushing this hard at the front and he looks to be back on strong form today. Will he take another World Championships title?

At the first split it is Nino Schurter and Ondrej Cink who lead the race with Henrique Avancini, Victor Koretzky and Mathias Flueckiger chasing them down.

After the start loop the top five Elite Men are:

The Elite Men's race is off, Henrique Avancini is leading the riders out on the short start loop.

A huge mistake for Maja Wloszczowska has most likely taken her out of contention for the bronze medal today. Will it be Jolanda or Sina who takes third position?

Going into the last lap the top five Elite Women are:

Evie Richards now sits nearly a minute ahead of Anne Terpstra with Sina Frei and Maja Wloszczowska passing Pauline Ferrand Prevot in the fight for a bronze medal.

After the third lap the top five Elite Women are:

The gap between Evie Richards and Pauline Ferrand Prevot has grown to 28 seconds at the second split.

Evie Richards is starting to ride away from Pauline Ferrand Prevot as the gap sits at 13 seconds after the first climb on lap three.

After the second lap the top six Elite Women are:

Evie Richards is now in the lead, she has managed to close more than thirty seconds in just over half a lap.

Evie Richards is flying today and has almost completely closed the gap to Pauline Ferrand Prevot.

Evie Richards is closing in on Pauline Ferrand Prevot with the gap dropping from 31 to 18 seconds at the first split on lap two.

After the first lap the top five Elite Women are:

At the second split on lap one Pauline has built her lead to just over 30 seconds. Evie Richards is now the rider in second place chasing down Pauline with Sina Frei in third place. Jolanda Neff has dropped back to fifth.

Pauline Ferrand Prevot has built an 18-second gap to Jolanda Neff at split one on the first lap. Following Jolanda is Sina Frei, 29 seconds off the leader.

Pauline Ferrand Prevot looks to be back on form today as she is starting to pull away at the front of the race. Only Jolanda Neff is able to stay close to her up the first big climb on lap one.

After the start loop the top six Elite Women are:

The Elite Women are off with Rebecca McConnell leading out the start loop.

Madfella (Aug 29, 2021 at 11:35)
@mountguitars: it's impossible to make a joke these days without someone taking offence

jwestenhoff (Aug 28, 2021 at 8:51)
Nino is the XC GOAT! Seriously though, it's interesting to me how much experience seems to help in World Champs, across categories. When everyone is putting it out there experience seems to carry people like Nino and Minnaar through more consistently than the fast burners.

jwestenhoff (Aug 31, 2021 at 8:25)
@Blackhat: agreed, it's not like anyone can really draft in XCO. Frankly passing is a) risky, less line choices (see Jolanda Neff at the Olympics) and b) very difficult when they're already going so hard, the front is definitely where you want to be.

Blackhat (Aug 31, 2021 at 8:57)
@jwestenhoff: and a bobble in a tricky section has radically different consequences. If you’re in front the other guy has to slow down or take a different line. It can be the end of the race if you’re second wheel.

And Richards… she was an absolute machine but said she didn’t think she had that kind of performance in her. Bravo to both!

maiduska (Aug 28, 2021 at 7:13)
VAMOS CHILE GRANDE VIDAURRE UN ORGULLO NACIONAL, for perspective bois vidaurre won U23 with half the support of the rest of high profile racers such a proud moment for Chilean cycling cheers

mi-bike (Aug 28, 2021 at 9:37)
Great result for sure, but 50% of support compared to other U23 riders? He lists support from scott, schwalbe, newmencomponents, malojaclothing, srsuntour and is riding for the
Lexware team.

snotrag (Aug 28, 2021 at 9:43)
Evie Richards you absolute legend. Enjoyed watching her Olympic race where she showed her skills for short periods and she's always done great at short track but today she has absolutely destroyed the field. Stunning. Incredible to think she's the first British XCO World champion too. Soo happy!

jcrr (Aug 28, 2021 at 17:37)
THIS! Mona, Laura and Kata are all just one step behind Loana. Not to take away a single damn thing from Evie's display, but the future behind her looks bright.

middx (Aug 28, 2021 at 10:55)
Hugely impressive win by Nino, especially given that he said at age 35, it's not so easy to compete with the young guns. What's happened to Emily Batty this season? She's struggling to make the top 10

iamamodel (Aug 28, 2021 at 16:40)
@notsofastoverfifty: "I'll get you girls a date with some hot downhillers if you can help me drop this Frenchie!"

madskatingcow (Aug 28, 2021 at 14:40)
@jespera you can spoof your location with a VPN client : the VPN app lets you select a server anywhere in the world where your VPN service has servers. I was able to watch through Red Bull all day from a geo-restricted area.

Suspect this late into her career, she's already thinking about the switch to becoming a lifestyle brand ambassador (social media influencer).

roofroof (Aug 28, 2021 at 13:34)
Jonas Lindberg moving from 68 to 15th place in his first elite world champs. Why hasn't he been picked up by a team yet? Look at that guys IG @jonaslindberg1. He shreds trailbikes like a EWS pro as well.

mfoga (Aug 28, 2021 at 8:22)
She was in touch with main group in early laps and then suddenly was gone. Not sure if she crashed, had mechanical or just went to hard to keep up and couldn't keep up. They didn't say anything on the broadcast.

mrkkbb (Aug 29, 2021 at 19:29)
Is it just me or is there a direct correlation between social media presence and poor performance?

Willikers (Aug 30, 2021 at 11:40)
@mrkkbb: there are riders who are very active on social who do deliver.
You can see who is working on their weaknesses and who isn't.
I'm not going to name names in this comment section but if you would like a partial rundown on hype machines see comments, including my own, related to this story:
m.pinkbike.com/news/jolanda-neff-the-team-invested-in-skills-and-technical-training-and-it-paid-off.html#comment_wrap

Hate me for sayin’ it…but I just did!

JesperA (Aug 28, 2021 at 11:52)
Not for me but it is georestricted here in Sweden for some reason, have been able to watch this live for years on redbull.tv so, thats a shame

madskatingcow (Aug 28, 2021 at 14:42)
You can spoof your location with a VPN client : the VPN app lets you select a server anywhere in the world where your VPN service has servers. I was able to watch through Red Bull all day from a geo-restricted area.

m1dg3t (Aug 28, 2021 at 4:52)
Georestricted in many countries as per the countless posts/articles. There were even articles here indicating this and how to get around the restrictions/watch the races.

hi-dr-nick (Aug 28, 2021 at 10:35)
To see a guy who seemed to be getting older and falling out of the real contention storm back to win this race is awesome, no doubt about it.