In a surprising turn of events, Jeep revealed that they will be entering the eMTB market after discreetly teasing a new utility bike during their Superbowl ad that featured Bill Murray.

The dual suspension eMTB only makes an appearance for a few seconds of the ad that sees Murray return to Groundhog Day in Pittsburgh, but we've discovered a website that confirms Jeep's intentions to sell the bike alongside their usual vehicle product line. Despite bucking the trend of sleeker, more discreet eMTB bikes with integrated batteries, the Jeep eMTB does have some interesting features. 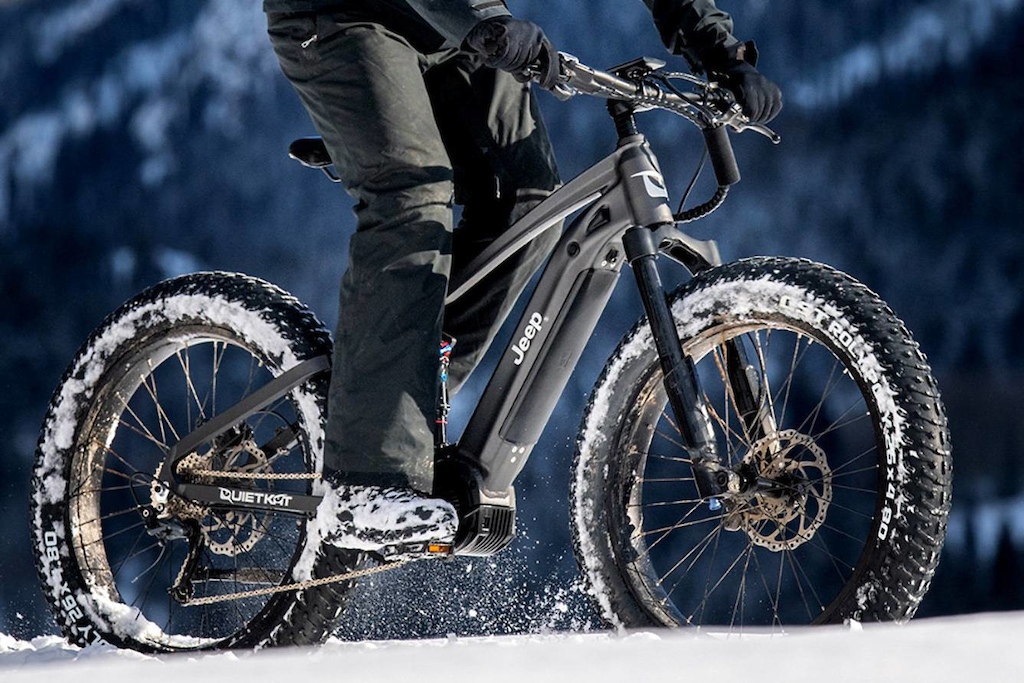 Better photos of the bike appeared on a Jeep e-Bike website shortly after the advert aired. 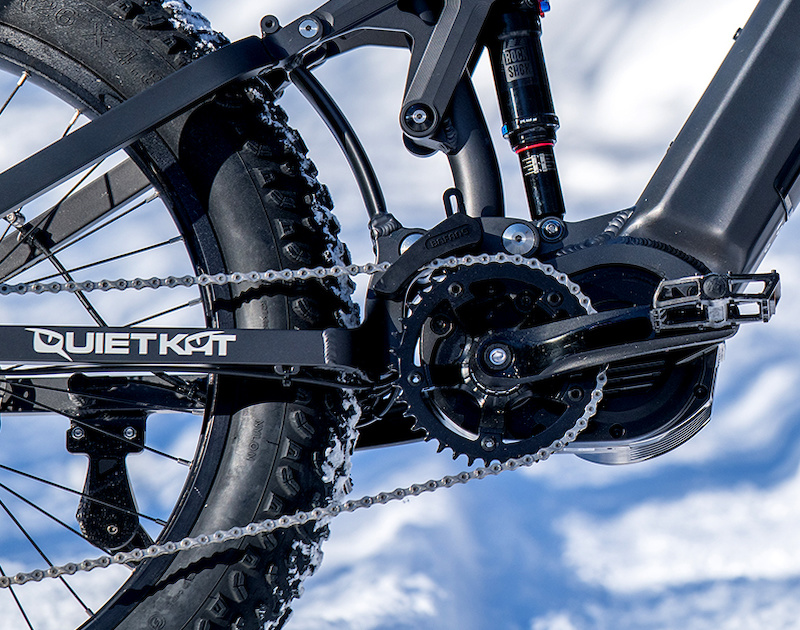 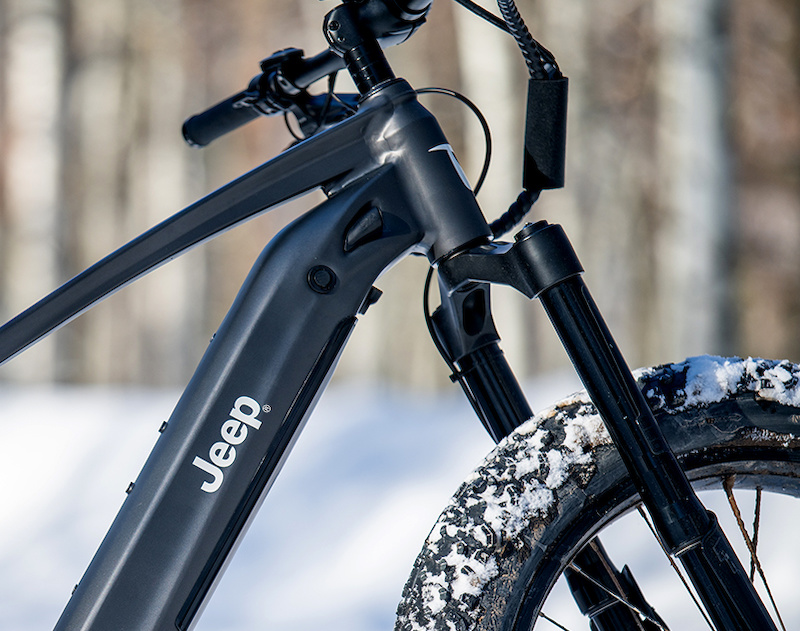 The bike, which is made in partnership with QuietKat, is claimed to be the 'most powerful' eMTB ever produced and has a 750w motor. The Bafang M620 unit, which drives the bike, is claimed to be able to create 160Nm of torque, which is way more than you ever need for a bicycle. For reference, a Suzuki Hayabusa has 155Nm. Other than the seemingly powerful motor, the Jeep bike will also feature an inverted fork (despite the ad showing a more standard offering). Adding to the odd selection of parts are huge 4.8" tires. 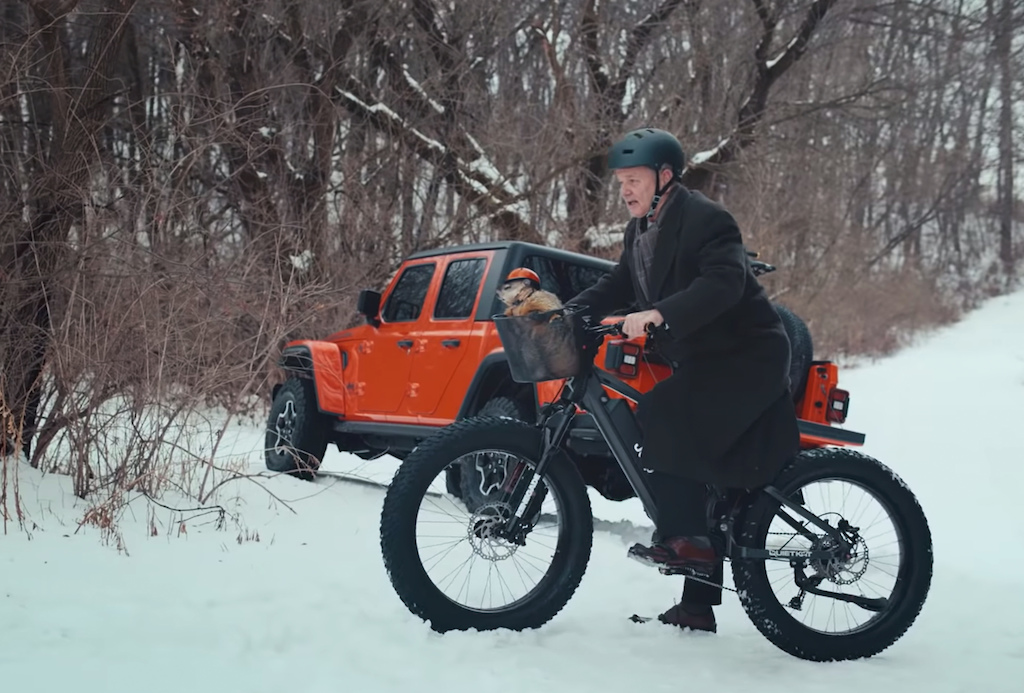 Who could have guessed that 2020 would bring Bill Murray riding an eMTB while carrying a groundhog in a shopping basket?

Currently, there isn't much more information available but it looks like Jeep is expecting to start selling the bike in June this year.

knarf1 (Feb 5, 2020 at 16:25) (Below Threshold)
@tobiusmaximum: You guys are hilarious got to admit but just wait in 5 yrs. you wankers are going to be the ones crying the blues looking for your new e-bike. HaHaHa

jgainey (Feb 4, 2020 at 16:46)
So they continue to under power their Rubicons and yet are about to overpower a bicycle. I do find it extra amusing they will use a flexy inverted fork, pretty apropos to their so called Dana 44's on the Rubicons.

gumbytex (Feb 4, 2020 at 16:52)
This has the new bafang motor whose torque specs rival many gas powered motorcycles. Therein lies the eBike problem. Local land managers can't keep up with which models are below a certain wattage. This bike has all the abilities of a dirt bike. And this is why eBikes are banned on many trail systems. eMTB companies shat where they eat.

That said, I don’t disagree with your point about land managers not understanding different types of bikes and the risk it poses.

gumbytex (Feb 4, 2020 at 18:21)
@ryan83: "whose torque specs rival many gas powered motorcycles". I'm not saying it rivals a moto in all respects, just that it has as much torque as gas powered motos can.

"And it pushes 160Nm of torque. Folks, that’s an insane amount of torque — a level that most gas motorcycles don’t reach."

this is insane, but it is inherent to electric motors, they super torqy

combee (Feb 5, 2020 at 3:32)
@gumbytex: A trained human can produce 100nm of torque which is more than a ton of bikes. Point is, without rpm, torque doesn't really mean much. I think my 250 mx bike produces only 25nm which sounds weak but the thing is way quick

micahaalders3 (Feb 5, 2020 at 8:25)
It’s all about gear ratios and shaft speeds with these small electric motors. It doesn’t make sense to compare a truck winch to a Bugatti Chiron on torque numbers alone.

jewpowered (Feb 5, 2020 at 12:06)
as a motoped dealer I can tell you anything with bicycle tires and decent power will shred tires so fast that they wont be able to keep the bike on the trail

So before you start pulling shit out of your ass to support your narrative about ebikes, please at least learn the difference between torque and power.

Power is the thing that matters for acceleration and maintaining speed, torque is largely irrelevant, especially for electric motors that produce peak torque at zero rpm, with a decline as the rpm goes up. And 1.5 killowats is 2 horsepower, you are not going to go anywhere even remotely fast with it. A Honda CRF50F that is designed for kids has more horsepower than this thing.

If you really have an issue with the few dudes that spend an obscene amount of money on one just to ride around trails, I think the problem is with you, not ebikes.

streetkvnt-kvlt (Feb 5, 2020 at 15:46)
@jewpowered: what sort of motopeds you sell bro? I use to work for a guy who made a killing selling shitty electric fat bikes to boomers.

homerjm (Feb 6, 2020 at 5:13)
It could have a Zillion of watts,but if it is an e-bike it would do 25 like any other e-bike. If it need tags like a car/motorbike it can´t ride in a bike park,trail center,only ride in private property or public roads like a car. You can hack any e-bike and nobody would notice it. For a fat e-bike,more torque/power would be nice. E-bike is not a problem,is another option,like it or not but there it is.

Ohiomtbwannab (Feb 8, 2020 at 3:53)
@phops: agreed. At least evokes might bring out more people to the trails and keep the trails from becoming overgrown and unused. I’d love my trails to get used more. Hell dirt bikes would make the trails ride better for mountain bikes imo.

chileconqueso (Feb 4, 2020 at 19:17)
I thought the same thing! After owning a number of Chrysler product I can say electrical functions aren’t their strong suit.

Chris-Brown23 (Feb 4, 2020 at 20:54)
@chileconqueso: Yep, even the latest Jeep Wrangler in Aust has been recalled last week because the battery cable was installed too close to the Catalytic converter!

chileconqueso (Feb 5, 2020 at 5:38)
My 97 dodge 2500 diesel was the worst. It looked like a cross eyed 5 year old wired the dash. It had Full voltage switches for the windows, locks, and lights. I ended up adding relays to a bunch of circuits. The replacement switches were very expensive. The truck ran really well and it had some beefy axles, I’m thinking of nice things to say about it. And that’s about it! Luckily the truck was so shitty that the aftermarket support was really good. I had to add a cross member up front because the frame twisted under load of the engine! A guy in California dreamed up a system to replace the chassis parts that failed every 30k miles. The fifth gear fell off the main shaft of the transmission. The paint would come off in sheets at the car wash. The factory brakes were so under powered. Oh my, but hey it had a Cummins and a 5 speed. I put a lot of money and 380,000 miles on it and sold it for 10k! I have a gas powered E250 now. Automatic. 330ci v8. It tows just as well upto 8000 pounds. But can tow no more. The dodge could tow twice that. Gas mileage is half but the up keep is so much less. I live in the mountains, work, play and travel through the mountains in Washington. 4wd is a necessity. Having enough power to get over the passes is too. Maybe that was over worded for a mountain bike website. But hey, I’ll never buy another American engineered product again. My next truck will be a tundra and titan. If my van wasn’t 4x4 it wouldn’t be so useful.

gus6464 (Feb 4, 2020 at 17:34)
FYI the motor on this thing is even beefier. An electric car site did the deep dive and this Bafang motor can burst 1.6kW of power which is just ridiculous for a bike like this.

Myfianceemademedoit (Feb 4, 2020 at 18:18)
Looks like a sub contracted promotional product that won't go anywhere just like many other car manufacturers have done in the past. Bill Murray is the man no matter what he's riding or has strapped to him.

phops (Feb 5, 2020 at 15:35)
The Turbo Levo SL is getting close to peak ebike, i.e decent weight with less power assist. All that needs to happen is actual DH bike with the same weight, with hot swappable, low capacity batteries that provide minimal assist, and only last long enough for one climb to the top.

dlb082101 (Feb 5, 2020 at 11:17)
In the wake of the commercial, a bit more information has been released about the Jeep e-Bike. It's being powered by QuietKat, a Colorado-based company known for their all-terrain electric bikes. The bike will have a 750-watt motor and can go 40 miles on a single charge.

BEERandSPOKES (Feb 4, 2020 at 23:28)
Where's RZA and GZA when you need them. Bill Murray is obviously suffering from a case of some "SERIOUS DELIRIUM!!!" That groundhog be tripping more than Murray gargling brake cleaner!!! WU TANG IS FOR THE CHILDREN!!!

pedalmore (Feb 5, 2020 at 8:24)
Of course we don't get it--it's not for us. Post the specs on a bag it, tag it, and drag it home forum, and the Bubbas will go nuts. Stocky tires appeal to stocky people, and that's enough torque to pull a dead elk, if you're into that kind of thing.

Maybe you won't be buying your ebike from a bike shop anymore and more so going to a dealership.

It's going to be some interesting years to come.....

eshew (Feb 4, 2020 at 18:33)
Well don't get your feathers in a ruffle. It's a Jeep so the chances of it lasting a season without breaking down are pretty slim. I've owned Jeeps for 20 years, it is a Jeep thing.

phops (Feb 5, 2020 at 15:38)
@701pirate: Usually, that is code for "I do regular maintenance and fix stuff that would be an issue". A car with no issues is one that you only service to replace consumables.

defineindecline (Feb 4, 2020 at 19:05)
Knowing Jeep, the transmission will shit the bed in the first season.

mudmandhbrazil (Feb 5, 2020 at 3:00)
The car is beautiful but I am confused, its a paid advertising for the car or the bike? When I see articles like that I think how much Jeep paid to PB for this car ad? Someone have any idea of how much cost an article on PB? Something around 10k? I like e-bikes but I prefer normal ones, first time I see a bike with a kickstand on any MTB website. So because it has an integrated battery is a good e-bike? Oh god!

dvcpinkbike (Feb 5, 2020 at 10:09)
all these butt hurt comments are groundhog day material - besides that's the perfect bike for Bill - the Jeffsy is for Walken.

phops (Feb 5, 2020 at 15:40)
Id honestly rather have an electric dirt bike. Its surprising that the only actual one that exists is the KTM Freeride E (not counting the undersized Cake and Sur Ron ones) and you can't even get that in US.

Geochemistry (Feb 4, 2020 at 18:09)
Lee Iaccoca invented the ebike as a way to get people outside and to reduce car usage. Seems right that a Chrysler division builds this bike.

OTBEnthusiast (Feb 5, 2020 at 5:22)
It's a Quiet Kat. Biggest pieces of s*** known to man. Have had several come thru my shop... Mainly bought by hunters looking for something cheap to haul their "kill"

danprisk (Feb 5, 2020 at 12:56)
This sounds great for trail building. With that much torque I can drag a trailer full of tools (and trail builders) no problem, and even drag deadfall off the trail!

MtbSamuel (Feb 4, 2020 at 19:28)
All the QuietKats I've seen have been pretty trash. I guess its fitting to have a jeep logo plastered on the side.

jonodavis (Feb 5, 2020 at 6:09)
Those are two totally different bikes in the ad and in the photos they published later. Look at the battery and head tube.

Bearw93 (Feb 4, 2020 at 17:01)
Stop Hating PB. This is quite possibly the best thing to happen to cycling in the last 10 years. A dual suspension fat bike - YES - Add a motor to that and FTW!!! I've been waiting for this and has finally arrived. I'm going to be blowing past all those enduro-tards and their stupid big skinny waggon wheels going up fire roads!!! Haters goin' hate!!! FTW!!!!!!