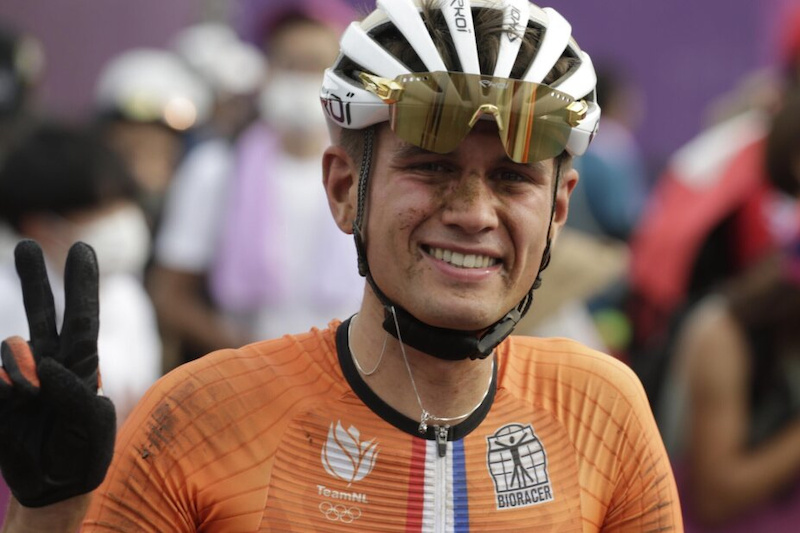 Milan Vader has been hospitalised following a serious crash during the Itzulia Basque Country road race on Friday.

The Dutch XC racer who finished 10th at the Tokyo Olympics joined the Jumbo Visma road cycling team in the offseason with the plan to combine stints of road racing with mountain bike races. Following a serious crash descending on Friday with around 100 km left to race on stage 5 of the Itzulia Basque Country, Vader is said to be in stable condition at the University Medical Hospital in Bilbao.

Dutch news website AD has confirmed with Milan's father that he suffered a broken vertebra, a fractured collarbone and shoulder blade. Milan was also operated on immediately to insert stents into his carotid arteries because they believe these had been narrowed. Milan was being kept under anaesthesia with the main priority to keep good brain function.

Milan's team Jumbo Visma has released a short statement saying that he is in a stable condition and will remain at the University Medical Hospital for the next few days for observation.


We will keep this article updated with Milan's condition and we wish him all the best with his recovery.

Daniel412206 (Apr 11, 2022 at 12:36)
@ompete: definitely, went to a GP race yesterday and the worst injury on the track was somebody who tests rode a honda Navi and sent it threw a few fences and broke their wrist.

ak-77 (Apr 11, 2022 at 13:46)
Road racing is definitely more dangerous than mtb. High speed shoulder to shoulder in a pack of 150 people, what could go wrong? Descending at 100 kmh with ultratwitchy geometry and rock hard skinny tires, only a light helmet for protection, what could go wrong? Riding anywhere you share the road with motorized vehicles is dangerous too. Solo or small group training on dedicated bike paths is fine.

Starch-Anton (Apr 11, 2022 at 15:43) (Below Threshold)
@ak-77: And it has to be said, a lot of road riders aren't particularly great technically, there's always a chance you get taken down by somebody who can't handle their bike. This won't be a problem for Milan who is of course an excellent MTB, and has all the skills.

kingpine (Apr 11, 2022 at 9:52)
Road.cc reports that he went over a guardrail during a descent and who knows how far he fell.....brutal. Hopefully he has a full recovery

Saucycheese (Apr 11, 2022 at 9:55)
The speed these riders descend is just as insane as WC DH. I hope he recovers and is able to race again

SlodownU (Apr 11, 2022 at 10:35)
Way more insane than WC DH. They're on skinny tires wearing only lycra and regular helmets going 3x as fast. The best case scenario in a crash is agonizing road rash.

flipoffthemonkeys (Apr 11, 2022 at 10:56)
according to strava i posted 58 MPH on a local descent. pretty sure the pro roadies are beating that regularly. i doubt if anyone in WC DH goes anywhere near that fast. on a side note, i have a buddy who went down the same hill i did, and hit a deer. 12 days in the hospital

mwglow (Apr 11, 2022 at 11:01)
@flipoffthemonkeys: There's a video somewhere of someone asking a bunch of pros what the fastest they've gone in a race. Most of them were from a particular stage in the Tour de Swiss, IIRC, and most were giving speeds in the 120-130kph (70-80mph) range. Absolutely insane but those speeds are pretty rare since that particular descent is like -8% and near dead straight.

flipoffthemonkeys (Apr 11, 2022 at 11:15)
@mwglow: i live in asheville nc. the descent i'm talking about is well known around here. it's steep AF but relatively short 3-4 miles. it's hard to get going much faster than that solo. in a group it is definitely possible to hit higher speeds, the down side is you're in a group and pile-ups are possible...so yes i can see how pros would say they hit 70-80 MPH and i don't doubt them. but i wouldn't really want to.

Blackhat (Apr 11, 2022 at 11:33)
@flipoffthemonkeys: I’ve hit 62 just over the mountains in TN. Similarly straight and steep section that lasted about a mile. One of the most terrifying things I’ve ever done.

energetik (Apr 11, 2022 at 13:10)
I went otb at about 20mph+ on a steep and fast mountain bike trail once. I woke up in an ambulance on my way to a helicopter ride. (I healed fine) I can't even imagine crashing at road race speeds! I hope this guy heals quickly and with minimal lasting effects. This is terrifying.

Augustus-G (Apr 11, 2022 at 19:25)
Been following this since Saturday. We had a moment of silence for him at our race. Best wishes on a full and speedy recovery.

pommie-shredder (Apr 12, 2022 at 6:24)
“Milan was also operated on immediately to insert stents into his carotid arteries because they believe these had been narrowed.”

Ummmmm what? Boy that’s a lot of pro athletes having heart problems this year

pommie-shredder (Apr 12, 2022 at 11:02)
@Themissinglink83: you are correct. I’m sorry, let me change my post. Why are so many ultra fit young people suddenly getting blood clots?

And did he crash because he had a stroke mid race? Or they just discovered in hospital that he was about to have a stroke?

pierceklinke (Apr 12, 2022 at 11:16)
@pommie-shredder: I found this detail very intriguing as well. I’m not sure how a trauma induced injury would have any effect on arteries narrowing. Any medical people have a clue?

Themissinglink83 (Apr 12, 2022 at 11:17)
@pommie-shredder: show me some data. The risk of blood clots is 1:10,000+ with the covid shot. That's coming from multiple studies with sample sizes of 3million or so. You're more likely to get a blood clot on the plane ride to a race than from the covid shot. Getting covid your blood clot risk is ~1:4. You can get bent with your clot shot nonsense.

mastadon (Apr 12, 2022 at 15:43)
@pommie-shredder: None of these responses are correct. When you have a significant neck trauma you get a CT scan with contrast dye, if the mechanism is great enough you can get what is called a carotid dissection. It is sometimes difficult to tell if the dissection is congenital or from the trauma but they will occasionally fix it anyway to reduce your lifetime stroke risk. It would have to be a very serious crash to disrupt your carotids but it can happen, especially due to the stretching in a hyperextension crash. It does have to do with clots but more from intravascular turbulence than grandma had a stroke.

Themissinglink83 (Apr 12, 2022 at 16:28)
@mastadon: the news article says they put in stents due to carotid narrowing, not carotid dissections or aneurysm. The news article may or may not be correct(I really doubt it does) , but wtf do I know being a telemetry nurse right?

mastadon (Apr 12, 2022 at 17:38)
@Themissinglink83: I obviously don't know why they stented an uber healthy young athlete, I'm just telling you a likely reason why they did given that he had a spinal fracture which was likely in the C-spine. C-spine injuries are generally flexion or extension injuries in cyclists. Flexion injuries can cause vertebral arterial compromise, extension injuries carotid arterial injuries which are generally referred to as dissections in this country. I am not sure about the US as I don't live there. Endovascular injuries caused by trauma are referred to as dissections in most western countries. I think you are perhaps getting morphologies mixed up in your mind as you are talking about plaques and aneurysms which would both be irrelevant in most healthy young people with a traumatic neck injury.

Any word on whether he crashed mountain biking or road biking, i.e. hit by a car?

"Milan Vader has been hospitalised following a serious crash during the Itzulia Basque Country road race on Friday."