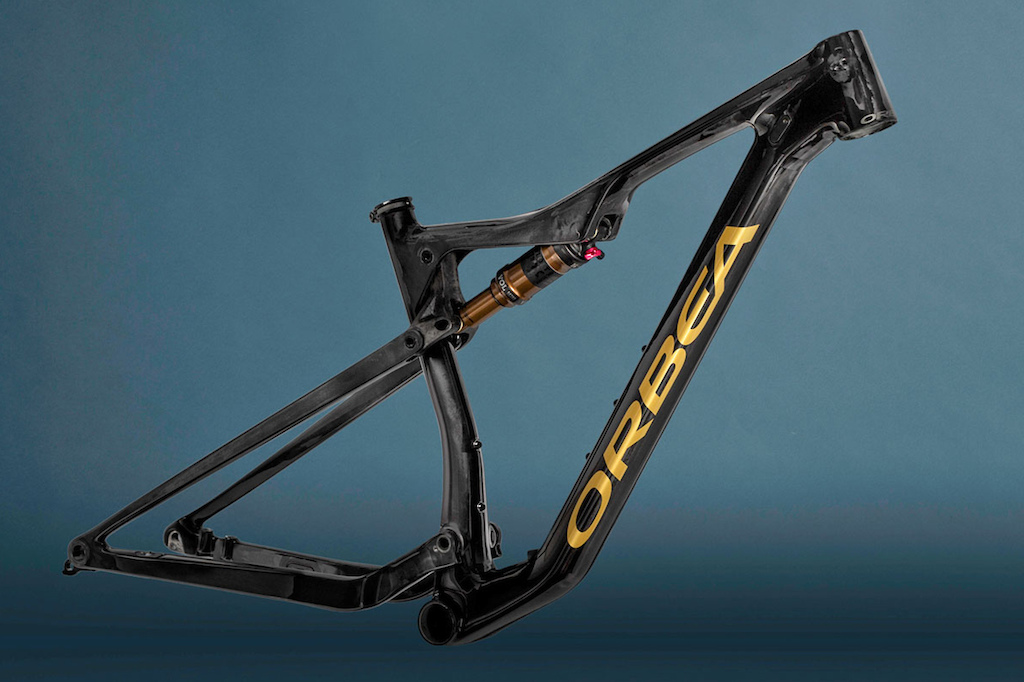 Orbea has launched a new raw carbon finish for some of its high-end models which it claims will save around 100 grams.

The new customization option from Orbea is available on its Alma, Oiz OMX and Rise bikes through its MyO tool. By removing the color layer, Orbea can decrease the thickness of the initial paint treatment and the final varnish, this results in a weight saving of between 80-100 grams depending on the model. For its lightweight XC bikes like the Alma and Oiz this is a decent weight saving but for the Rise eMTB it is probably more of a design choice than a choice that offers any real advantage on the trails.

The raw finish option is available alongside the existing range of colours and it can be adjusted to have a matte or gloss coat on the raw carbon. While the finish is mostly paint-free, the frames will still feature the standard logos which can have their colours changed as part of the MyO program. 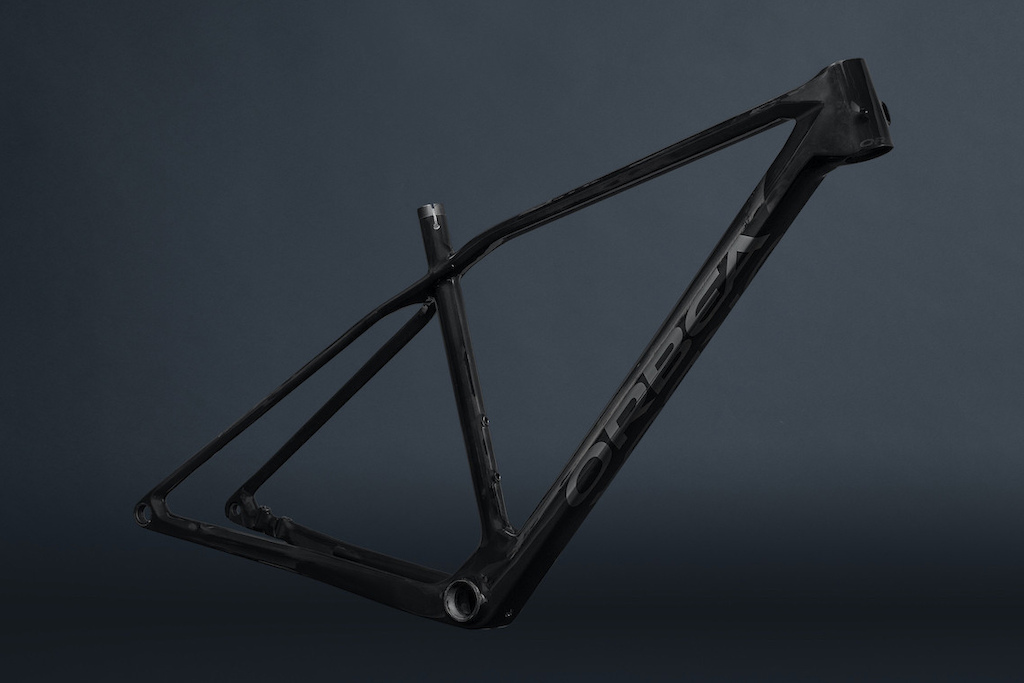 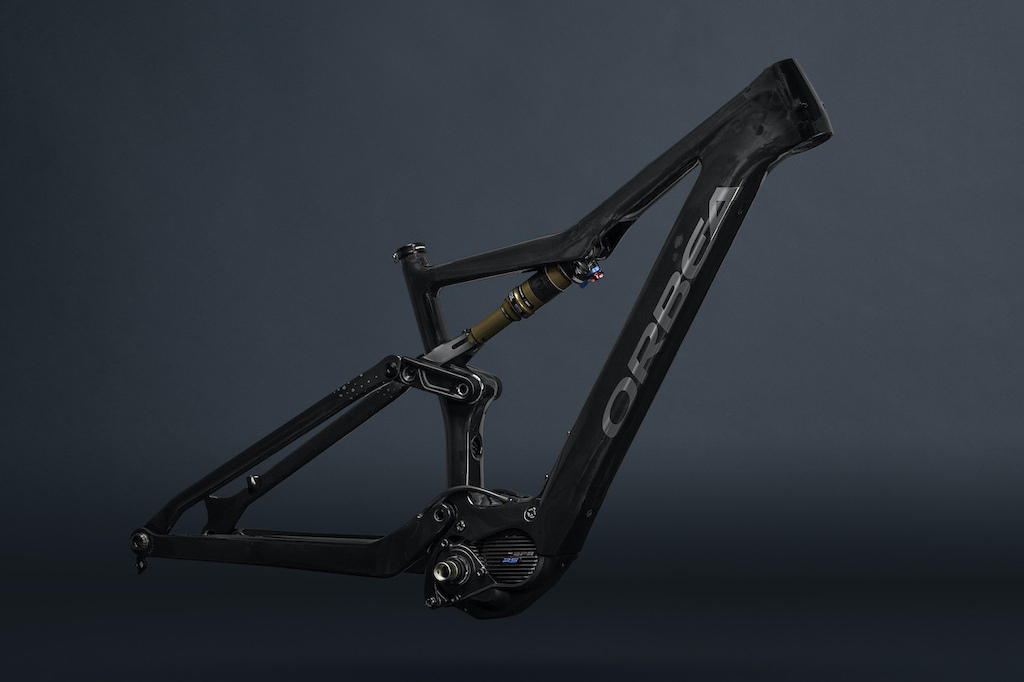 The new finish options are available now through Orbea's MyO program and you can find out more about the Raw carbon finish here.

mi-bike (Jan 4, 2021 at 8:38)
After many memorable years together the time has come to say a paintful goodbye. It was an awesome journey together with you. Thank you for the colourful memories. We wish you all the best for your future. Keep spraying.

theredbike (Jan 4, 2021 at 9:35)
@jj12jj: I mean yes but it is a solid piece of stamped steal. There is no hydro molding or plastic bits which are traditionally super expensive.

hllclmbr (Jan 4, 2021 at 9:43)
@jj12jj: Not when accounting for their novel manufacturing technique, and bulk purchasing, since they are using the same alloy to build their next gen of rockets.

konapostachild (Jan 4, 2021 at 9:55)
@jj12jj: Not confirmed but I'd assume that Elon is going to make some cyber trucks out of scrapped rockets.
Elon loves to take something thought of as waste and turn it into profit. A good example are the bricks they sell from the Boring company.

conoat (Jan 4, 2021 at 11:17)
@jj12jj: nevermind how heavy SS is in comparision to ALU. I highly suspect the production truck to both look wildly different that the prototype(ffs, it better) as well as be made from more reasonable materials.

jj12jj (Jan 4, 2021 at 16:20)
@theredbike: the expensive part of stainless steel is the stainless steel. Aluminum bodywork is stamped as well and is cheaper (marginally) to stamp, smaller presses are needed

theredbike (Jan 4, 2021 at 9:30)
The inch and foot are pretty cool systems built out of the human body that I think are lost on people today. The way it worked is if your building a sword or something the handle will always be a standard size like 5 inches but when the builder builds the inch will be remeasured based on the final user body size. This means that in olden times people could use standardized measurements for building all things but could adjust the unit size of measurement to account for scale.

Barley used to be super common and worked effectively as a reference of measure. We now need higher accuracy so using a system based on something none really uses doesn't make sense.

Spiral23 (Jan 4, 2021 at 21:17)
@theredbike: I’m from Europe, living in Canada. Worst uneducated lame worker can build straight and square home using metric system. Here in Canada most houses do not see anything under inch as a problem. Floors, windows, doors, walls,... its all out. In almost EVERY house! So please dont tell me imperial is better!

southoftheborder (Jan 4, 2021 at 8:45)
He can't reply right now. Too busy shaving off the extra half crown from the Intend fork.

robokfc (Jan 4, 2021 at 8:41)
At least one bike company that I worked for shied away from raw finishes because consumers complain about the layup appearances at tube junctions. Controlling each individual piece and making them consistent is extremely difficult.

fullendurbro (Jan 4, 2021 at 10:50)
@robokfc: Yep, look at how much trouble Unno goes to make their carbon look good. Or in the automobile segment -- Pagani. We can't expect 8 year olds in China to have that attention to detail when putting our frames together.

scantregard (Jan 4, 2021 at 11:48)
Fair play to Orbea, building a frame that cant hide a ton of filer takes more effort. visible carbon used to be a big deal in the late 80s & all through the 90s, its funny how that fashion has come around again

yes you could take a dump & loose 100g, but the person with the raw carbon would still be lighter

bicyclerider (Jan 5, 2021 at 11:16)
@jaame: I use mostly knives when raw carbon is the goal and sanding for when I'm repainting. While I have a bit more support these days I've paid for several of the frames I've stripped in the past, for example the "World's Lightest" Scale SL and Spark SL builds.

That is interesting to know and I have to say quite surprising. I assumed because you always do Scott bikes they must be supplying you - it's great publicity after all. To hear that you have actually purchased some of them makes them even better.

Out of interest, do you hammer the bikes after the photos are done? If so, have any of them ever snapped or cracked on places where the knife slipped? I've heard people say carbon bars usually crack where the brake levers have been moved and scored the tube with a bit of grit that was under the clamp. Using a knife blade seems like it would have a high possibility of leaving similar scores or scratches. What is your experience of that?

I've been building more or less wild bikes for many years, but with those two xc bikes my builds started to get a lot of attention so now things are a little different of course with some support. But those two, the Genius and my alu Scale were fully paid for.

Absolutely, some more than others but they all get properly ridden. I've taken xc bikes tot he bike park, raced and for example that World's Lightest Spark build survived the ABSA Cape Epic stage race under its new owner.
While you can damage frames with the knife method for sure, cuts like that is nothing I worry about. It can happen quite easily on sharp corners/edges of frames but with a stiff knife blade and good technique you'd b e fine. As for that specific problem you describe I dare say that in most cases it's not about surface damage but over tightening. While a scratch isn't good and can lead to failure, in many places on a bike you so many layers of carbon that a very minor damage to the outer layer won't cause a failure. For example most frames are sanded quite a lot after they come out of the mold, so they sand through the outer layer in spots at the factory already.
But especially lightweight handlebars and seat posts are sensitive to over tightening, an I've seen quite a few cases over the years.

plyawn (Jan 4, 2021 at 8:51)
You obviously don't understand the Cost vs. Weight relationship in the bike industry!

ratedgg13 (Jan 4, 2021 at 9:14)
They actually don't charge for the MyO custom paint jobs - or no paint as in this case. Personally, I think its a super cool option especially as there is no up charge.

Nygaard (Jan 4, 2021 at 9:50)
They will probably have to put more work into the carbon fiber layup as there is no paint to hide shitty craftsmanship. So my guess is no.

TheR (Jan 4, 2021 at 10:12)
@ratedgg13: Yeah, we are a cynical bunch. It’s fine, and I think a lot of people dig the raw carbon look. One hundred grams isn’t enough for me to care, especially on a frame. It would be nice if they knocked a couple hundred off for no paint, but also not a deal breaker if I were buying this bike.

FarmerJohn (Jan 4, 2021 at 10:46)
Likely the other way around. Carbon frames have blemishes too and its easy to hide with paint, keeping the reject rates low and saving the factory money.

crazyXCsquirrel (Jan 4, 2021 at 10:51)
@Nygaard: Paint hides a multitude of sins! Pretty sure this applies to all industries.

SickEdit (Jan 4, 2021 at 12:12)
@Nygaard: This is the reason why in the automotive industry clear finished carbon parts are considered more work intensive/expensive because someone has to align the first layer (in the mould).

IluvRIDING (Jan 4, 2021 at 8:30)
Looks ok, but I wonder if it has any UV protection. The resin degrades much faster on sunlight UV exposure.

Better to take a full shit.

codypup (Jan 4, 2021 at 14:50)
I am more of a Weight Sausage than a weight weenie, cause that's what I look like when all my baggy gear is dirty and I have to wear my one xc style jersey. Can I still buy this?

blcpdx (Jan 4, 2021 at 8:52)
This option still has clear coat, just not a color coat. A color coat also requires a clear coat. Using only a clear coat eliminates this redudancy, and yields the quoted weight savings. But you probably still shouldn't store one of these on the balcony of your condo in Winter Park.

vinay (Jan 4, 2021 at 12:50)
Quite undecided yet, what to choose. The antimatter or the energy finish? Einstein would have taken the latter but antimatter is tempting too.

tonyplanet (Jan 4, 2021 at 14:07)
Orbea just needs to bring their prices down just a little bit. Great looking bikes, but they are a little on the pricey side.

rsbromley (Jan 5, 2021 at 10:43)
Maybe in North America. Over here they offer way better value for money than Trek or Specialized. My Oiz with full Fox Factory and XTR/XT was £4500 compared to about £6500 for an equivalent Epic.

If a person is concerned with 4oz they have bigger issues.

bigtim (Jan 4, 2021 at 8:57)
If only there was a dedicated article where this could be discussed @Pablobarcelona.