Pauline Ferrand Prévot Could be Signing with Ineos 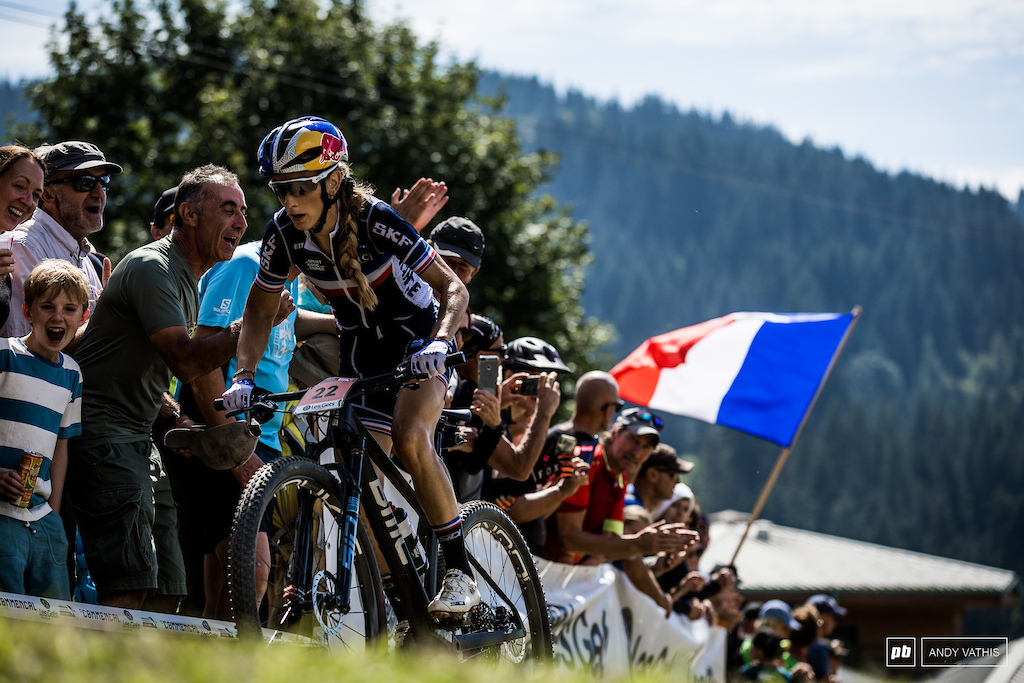 The racing rumours season is starting to heat up as it appears Pauline Ferrand Prévot could be joining Ineos in 2023.

While there are no public announcements just yet VeloNews has reported that two sources have confirmed the agreement for 2023. VeloNews says the first source said the deal was "100 percent" done with a second source stating Pauline would be Ineos' "first female racer".

Pauline has had an incredible season in 2022 with the XC, XCC and Marathon World Champ titles with a potential fourth rainbow jersey as she may be racing at the Gravel World Championships. It is not clear if a potential move to Ineos would mean road racing would be added to the French racer's calendar or what bike she would be riding. Currently, Tom Pidcock, who races for the Ineos Grenadiers team, rides blacked-out BMC bikes.

We have reached out to Ineos and will update the article if we hear any details.

lemjam (Oct 6, 2022 at 8:34)
I preferred the rumours that she was spending a lot of time on an enduro bike. With her fitness and skills that would be cool to see.

RogerMexico (Oct 6, 2022 at 11:05)
@jclnv: I love how people constantly compare the two post-Olympics, as if the ability to ride a step-down on an XC bike is what really separates riders at this level. Is Neff more skilled in certain respects? Maybe. Is she the better racer, I don't think so. But who cares. Both are great, and their rivalry is fun to watch.

HankHank (Oct 6, 2022 at 11:16)
@jclnv: if skill is defined by someone's ability to compete in different disciplines, PFP has been World Champion in 3, compared to Neffs 1.

If it's bike handling, you're haven't watched much XC if you think Neff is twice as good.

I'll agree with you that Neff is the best bike handler in XC though.

pakleni (Oct 6, 2022 at 11:53)
@vtracer: Hope not. As a part time roadie I really like Dogmas but their eMTBs are embarrassing for the Pinarello name

jclnv (Oct 6, 2022 at 11:55)
@RogerMexico: You really think Neff only won the Olympics because of a stepdown? She destroyed PFP on every descent, especially over the wet rocks. In an EWS she would destroy PFP and probably every other woman.

PFP has a big engine but she won road worlds when the women's field was relatively weak. She wouldn't have a chance against the top road women these days. Right place at the right time.

bikewriter (Oct 6, 2022 at 12:25)
PFP would not do well enduro racing. She'd have to relearn everything about racing: stop pedaling after 4 minutes, switch her helmet from left grip to right grip while making her way to the next start that's 45 minutes away (2 miles) then sit around and talk for additional 45 minutes about "that one rock where I lost at least half a sec."

OnTheRivet (Oct 6, 2022 at 12:28)
@RogerMexico: PFP has adopted the Marianne Vos approach to racing, peak for a few high value races a year, Worlds, Olympics. Not what I like to see in a racer but its successful. FYI, Neff is head and shoulders above PFP when it comes to driving a bike, pretty easy to see when watching them race.

RogerMexico (Oct 6, 2022 at 12:43)
@jclnv: No, I obviously don't think that's the reason Neff won the Olympics and I did not say that. Also Pauline's crash happened early on (btw, they were neck and neck at the time, and the clear lead group), so it makes sense that Neff would have proceeded to win out on every descent moving forward. All that being said, Neff raced brilliantly that day and PFP blew it with the early strategic mistake.

I guess Neff would destroy every other woman in a hypothetical EWS?

You're right about PFP "right place right time" in winning the road worlds. Won't argue with you there.

But I will make a point that PFP has incredible bike skills and I seriously question why people constantly make the comparison between her and Neff, as if PFP doesn't know how to ride a bike and wins because she has good fitness. To me, that's ridiculous (not saying that's what you're arguing, btw). Case in point, PFP destroyed the field at Les Gets this year on a hardtail and was the only woman racing a hardtail that day and put time on Neff in second place on the downhill finish chute after Lap 1.

dirtologist (Oct 6, 2022 at 13:28)
That thread of dudes discussing the ability of a woman that landed 3 rainbow jerseys this season is just what I needed to read

There you will see that PFP ran out of talent. Neff even looks back at her with a WTF expression. Completely different planet bike handling wise.

HankHank (Oct 6, 2022 at 14:24)
@dirtologist: except the person that started the fire, the rest either backed PFP or gave a good argument. The only input you've given is to sit on the fence and assume everyone in this thread is male... (I think you're right, but come on, you can do better than that)

sino428 (Oct 6, 2022 at 15:26)
@jclnv: so we are judging two women’s XC racers by how they might do against each other in some hypothetical EWS race, which neither of them actually ride in?

Ricolaburle (Oct 7, 2022 at 0:37)
@jclnv: She is. She won the Reunion Megavalanche in front of Melanie Pugin, just crowned in the EWS. And Neff is impressive, I admit it too. The women field doesn't run out of talent ;-) !
fullattack.cc/megavalanche-de-la-reunion-2021-pauline-ferrand-prevot-et-hugo-pigeon-victorieux

jclnv (Oct 7, 2022 at 10:19)
@cypher74: I just like complete mountain bikers. Imagine if all the courses were legit like St Anne. Maybe Neff would be unbeatable.

lemjam (Oct 12, 2022 at 13:54)
@Ricolaburle: I'm all "It would sure would be cool to see PPP race enduro", then the internet wires just about melt from people arguing. sheesh.

hamncheez (Oct 6, 2022 at 9:14)
I want an elite top ten XC racer to compete on an aliexpress open mold frame. Please it would be so glorious

corposello (Oct 6, 2022 at 10:20)
Stephan Tempier basically did that on the Decathalon Rockrider. Which, at 2300 euros for a full build looks like an absolute steal.

Whipperman (Oct 6, 2022 at 23:36)
@cgreaseman: I don't think the rockrider is an aliexpress open mold. However Torpado or Olympia bikes are definitely chinese Scott Knock-offs.

Killerclam (Oct 6, 2022 at 12:41)
There was a post on her IG stories back on Sept 21 about her "filming all afternoon long for my new team announcement"

It's gone now though... here's a screencap:

There's a dropbar bike shown in shadow in this IG post

Starch-Anton (Oct 6, 2022 at 13:00)
This was originally on a European MTB website about a month ago; but now a road biased website has found out it's appeared on here.
There were actually two different rumours; one about going to the Ineos team to ride MTB. the other was riding for a team sponsored by Ineos, but not connected to the well known cycling team.

luriaguy (Oct 7, 2022 at 4:26)
Target race planing should be out by penalizing racers not completing 90% of the season races.
All the above as entry ticket to the world champs.
Pauline is a top rider but she isn’t playing a full game. Armstrong allow head a way to quit few tours every year to save himself to the peek in the tour de france.

MDW83 (Oct 7, 2022 at 6:21)
I agree with this to a certain extent (so long as the lesser financed athletes and privateers aren't penalized). The UCI definitely needs to improve how they schedule the races though.

ilovedust (Oct 6, 2022 at 10:35)
In 2022 there surely has to be an ethical question of being sponsored by not just a gas guzzling 4wd, but one that is a blatant rip off of another brand and also still not released.

cxfahrer (Oct 6, 2022 at 10:59)
It is not a rip-off, it is basically the same car, just completely new build, with the same old BMW engine. Magna-Steyr built some other great cars before. I would not mind the Ineos badge, if I could afford it if I needed it - which is both not the case.

eroc43 (Oct 6, 2022 at 9:09)
I think that has been a given for a while, has to be a little awkward when your longtime ex boyfriend is your boss. Obviously she handled it amazing this year, but after the year she has had, she can pick where ever she wants to go.

Whipperman (Oct 6, 2022 at 23:38)
The other rumor I've heard is not exactly the same : Pidcock would create its own structure for MTB racing and PFP would be part of it.

Spetsa (Oct 6, 2022 at 10:45)
To question if she will do any road racing is comically crappy journalism. Who is she going to race for?

KeithShred (Oct 6, 2022 at 12:38)
She should be signing these nuts
Below threshold threads are hidden

Phipu (Oct 6, 2022 at 8:53)
Regarding the bike: new commencal? If she's actually going to ineos, it would not interfere with their current road bike sponsor.
So, maybe a commencak XC-Team. Or Ineos-Commencal-XC-Racing?

PAmtbiker (Oct 6, 2022 at 9:58)
Tom Pidcock raced World Cups all year on a black-out BMC. It's not a surprising move. Maybe it means the Ineos is going to move away from those awful looking Pinarellos

prevail (Oct 6, 2022 at 10:20)
@PAmtbiker: Pinarello is already developing a XC bike. Maybe we will see it next season. But definitely before the 2024 Olympics.
And if Commencal stays true to their no carbon strategy their new bike won‘t be a racebike. The weight penalty is too high.