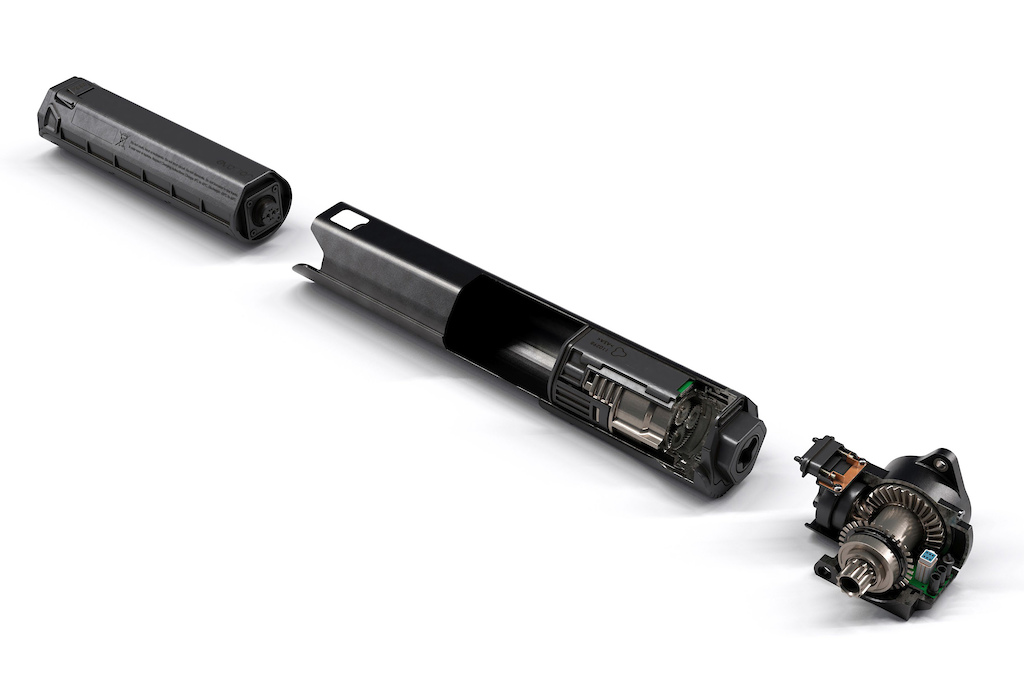 Porsche has continued its expansion into the cycling industry as it secures a 20% stake in Fazua with the option to buy more shares.

For an undisclosed sum, the German car manufacturer has purchased a 20% stake in the eBike motor and battery brand with the option to buy more shares leading to a potential buyout. Fazua has been developing motors and batteries for eBikes and eMTBs since it was founded in 2013 and its products are found on bikes from brands like Trek and Lapierre. Last year we saw Trek launch its lightweight XC eMTB the E-Caliber with Fazua's Evation drive system delivering 55Nm of torque from a 250 watt-hour battery, the bike weighed between 34 to 40lbs.


Porsche has also announced that it will be forming a new collaboration with Ponooc, a venture capital arm of PON Holdings. Details are pretty light on what this will actually mean but the first step will be producing the next range of Porsche eBikes.

This is not Porche's first big purchase in the industry as we reported last year that the German car brand had bought a majority take in Greyp, this already followed the release of two bikes made in partnership with Rotwild.

gnarnaimo (Feb 10, 2022 at 13:31)
Are you referring to the most successful car in LeMans history? Pretty sure it has always worked ok.

The most dominant vehicle of LeMans was a porsche, the 962. That was a mid engine car.

The second most dominant was the audi R8. That one probably cheated emissions.

While the engine was reliable and powerfull, the placement of it on the 911 is terrible. Thats why old school 911's were know as widowmakers. Even porsche knows this, because they make their entry level cayman/boxter so underpowered and just scaringly close on lap times to the 911, that they throw every bullshit eletronic nany to either make the 911 better or the cayman/boxter worse at the track.

By now, they know how to tame the pendulum effect.

rupintart (Feb 10, 2022 at 19:08)
@Notmeatall: While you’re not wrong, the GT4 RS proves that engine placement and the electronics aren’t why it’s slower.

You could arguably say “if you put the same wishbone suspension up fro t, etc…it would win.” But we’re talking almost 10 seconds slower (7:04 vs 6:55). Same engine, same lack of nanny electronics, just different placement…you’re not gonna make up 10 seconds with a wishbone front end…

There’s no doubt the mid-engine is better and maybe the Cayman is what they want the 911 to be…but they’ve pretty much dialed in rear engine placement and shown that a mid engine street car isn’t really any better than a rear engine one…so at this point it becomes kind of moot.

And that is exactly what I was explaining. Porsche does everyting in their power to make the 911 faster!

Porsche doesn't want the 718 to be faster.

Come on! Looks like you are not even trying! 718 doesn't need the full double wishbone front suspension or rear wheel steering, it just needs the same power to be faster than the 911!!

mhoshal (Feb 11, 2022 at 6:08)
@Jdubs004: not butthurt lol more like actually educated on the matter instead of making false statements out the ass to get upvotes. It amazes me the amount of stupid comments that make it to the top of the comment section. Shows how uneducated most pber's are.

gnarnaimo (Feb 11, 2022 at 16:33)
@Notmeatall: Sorry I meant American Le Mans. However the 911 has had success in 1979 being the only production based vehicle to ever win the 24 hour of Le Mans in the 935 chassis. Being a group 5 car beating out all group 6 vehicles was quite the feat. This was after 10 years of dominance in European GT, USA IMSA and World Championship GT racing.

GumptionZA (Feb 10, 2022 at 7:03)
its worth noting that porsche either owns or is owned by or is heavily invested in Rimac (i know theres heavy involvement here just cant remember what, the taycan and E-Tron run on rimac tech), who have acces to some of the best battery tech in the world. also, Rimac owns Greyp bikes, who make fugly ebikes.

if my experience working with other companies under the umbrella of the company who owns the company i work for is anything to go by, this means absolutely nothing. but hey, interesting nonetheless. If we're lucky it might mean lighter, more energy dense batteries coming to the E-mtb market

Hahaha, all that development for that conclusion xD

GumptionZA (Feb 10, 2022 at 7:19)
@Will-narayan: its like 3 degrees of separation between the fazua battery guy and the rimac battery guy! and they need to do all this without anyone at greyp finding out and asking it to be extra ugly. that is not an email chain i'd want to be part of

Afterschoolsports (Feb 10, 2022 at 8:43)
It doesn’t matter at all. There isn’t some magic cell that they have access to which isn’t available to everyone else. There is more density to be eked out of current chemistry, but not a huge amount.

Lastpikd (Feb 10, 2022 at 6:57)
This is where I see ebikes going in the future. A small motor that adds 75-150 watts to the average riders power that only adds a few pounds to the bike. Dont know where this will fall in the grand scheme of pricing but keeping a mountain bike around "normal mountain bike weight" makes more sense to me than having a 50# bike that burns through ebike specific components at a more frequent rate.

endoguru (Feb 10, 2022 at 7:16)
I agree 100%. As I’ve gotten older, now 66, I ride the lowest powered ebike there is. I just need a little help to do the same rides I’ve always done. I initially bought a full powered ebike and didn’t like the weight or the power. As you age you lose muscle and aerobic capacity. If you don’t think it will happen to you, you are delusional. I’ve heard young guys say, “If I can’t ride a non-ebike, then I won’t ride”. Good for you. Have fun being a fat old man staring at the TV. I choose to ride until I can’t hold onto the bars anymore.

g-42 (Feb 10, 2022 at 9:45)
I rode a full-fat e-bike as a demo for a weekend. On the kinds of trails I normally ride, no dice - I'd much rather do the extra work for the more responsive bike on the way down. The big heavy bike just didn't come into its own unless you were fully pinned - and I prefer a slightly slower style of riding. But riding that thing in a place with awfully long and grind-y logging road ascents and big burly downhill trails with lots of rock-armored berms - yep, I can totally see it for those kinds of places. But essentially, that just takes my preference for mid-travel trail bikes over full-on enduro sleds and the style of riding they encourage and takes that into the e-bike world.

The lighter/nimbler options, like the insanely expensive Specialized e-bikes that are out now, and whatever trail-bike successor to Trek's Fazua powered XC bike may come out, seem like they'd be neat, though - if you don't lose too much of the trail bike goodness and have the assist to allow you an extra lap, that could be pretty cool.

crazyknowledge (Feb 10, 2022 at 8:01)
The one thing I like about the idea of the Fazua system is that when you remove the battery the bike pedals like a normal one without resistance, all be it with a slight weight penalty. That way if you were doing uplift days where you don't need the battery you can save a massive chunk of weight. Trouble is it seems like only Lappiere and NOX have used this system on full suss bikes and to me neither one seems that appealing.

I remember them days of yellow Grip Shift

Caliber38heavy (Feb 10, 2022 at 11:16)
Fazua motor's are crap.....on MTB's. Ive got a Lapierre eZesty (fazua motor) which has had the motor warrantied after 6 months usage due to water ingress, and it has also had a battery replaced under warranty.
The sealing the system uses is just not good enough for an MTB. Hopefully with a bit more funding they will be able to fix these issues.

rupintart (Feb 10, 2022 at 19:11)
This is a pretty good plan…with the popularity of eBikes, being able to put a Porsche eBike on the sales floor as another toy to buy is kind of genius. If you look at the current Porsche bike on sales floors, they’re kitted out with Crank Bros wheels and other pieces…they’re actually well kitted out.

Publicanus (Feb 10, 2022 at 9:17)
This is probably VW wanting to make sure they are on top of any motor tech that comes along, sounds better if it's Porsche buying in.

fiekaodclked (Feb 10, 2022 at 7:38)
I will summon the will to care about ebike news once there's a working solid state battery.

calmWAKI (Feb 10, 2022 at 6:45)
Tucker Carlson claims that Alex Jones told him that Emily Batty is a Porsche lobbyist trying to get Canyon to apply their tech in her bike. Emily, MVDP, Porsche rep and Canyons new CEO were seen playing bridge. Joe Rogan is worried about side effects of such collective. Expect Spotify stocks to go down even more.

mazze (Feb 10, 2022 at 6:48)
I think it's more about developing innovative E-Tech and securing patents than it is about bikes for Porsche.

Afterschoolsports (Feb 10, 2022 at 8:49)
Yes. An acquaintance had one of their super expensive MTB’s from the late 90’s. I can’t remember what suspension it had but they had a spinergy type wheel set, Sachs drivetrain, and I think magura hs33 brakes. It was horrible, but most full suspension bikes were back then.

nathangoufflol (Feb 10, 2022 at 6:58)
HAHAHAHAHAHA i get it because porsche is a car company and not a bike company but now theyre expanding into the bike business

bozomichael (Feb 10, 2022 at 6:40)
Would really like to see tesla create a bike and see the competition between the two.

mazze (Feb 10, 2022 at 6:54)
it would probably accelerate outrageously quick and handle like shit

mi-bike (Feb 10, 2022 at 7:01)
Strava / Trailforks / Gaia anywhere in the world thanks to Starlink connectivity. The world would be a better place, not.