Round Up: 14 XC World Cup Cockpit Setups Past & Present

May 24, 2021 at 8:46
by Ed Spratt
Share
Tweet
47 Comments
Every rider has their unique setups for their race cockpit, and in XC racing there are some very interesting quirks to some of the top riders' race machines. We looked back through our collection of bike checks from World Cup XC races to find some of the bar and stem combos that are being run by some of the world's top riders. 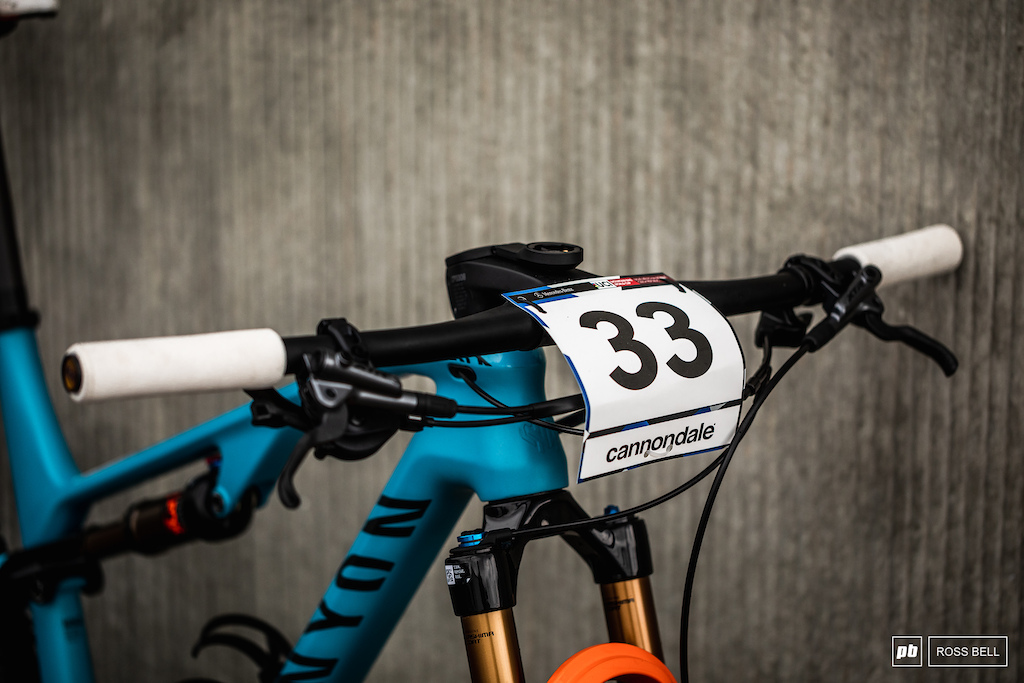 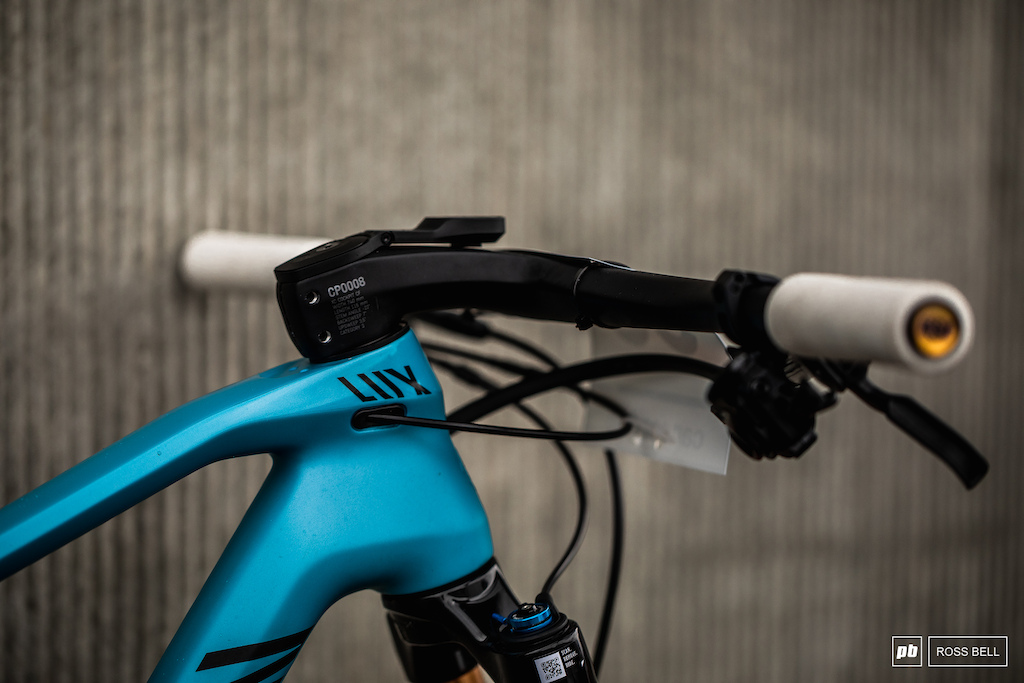 Mathieu van der Poel runs an interesting setup for his cockpit with a 720mm integrated bar and stem combo. The CP0008 from Canyon has a claimed weight of around 322 grams for the full setup and Mathieu runs this with the dedicated Garmin mount. On MVDP's bike, this measures a huge 115mm in length with a -22 degree stem angle. 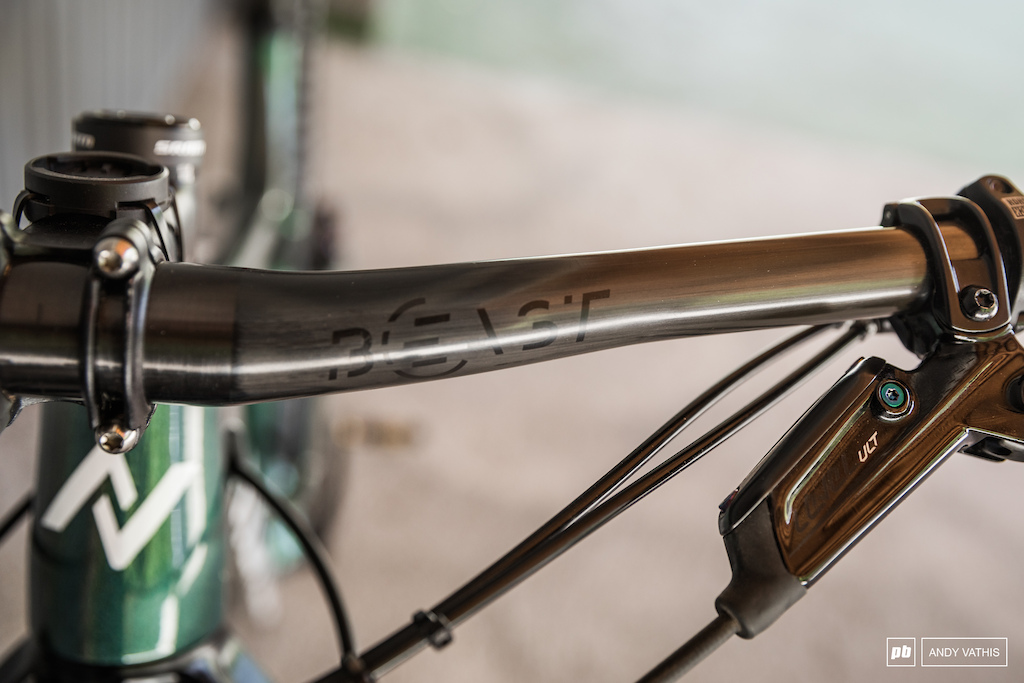 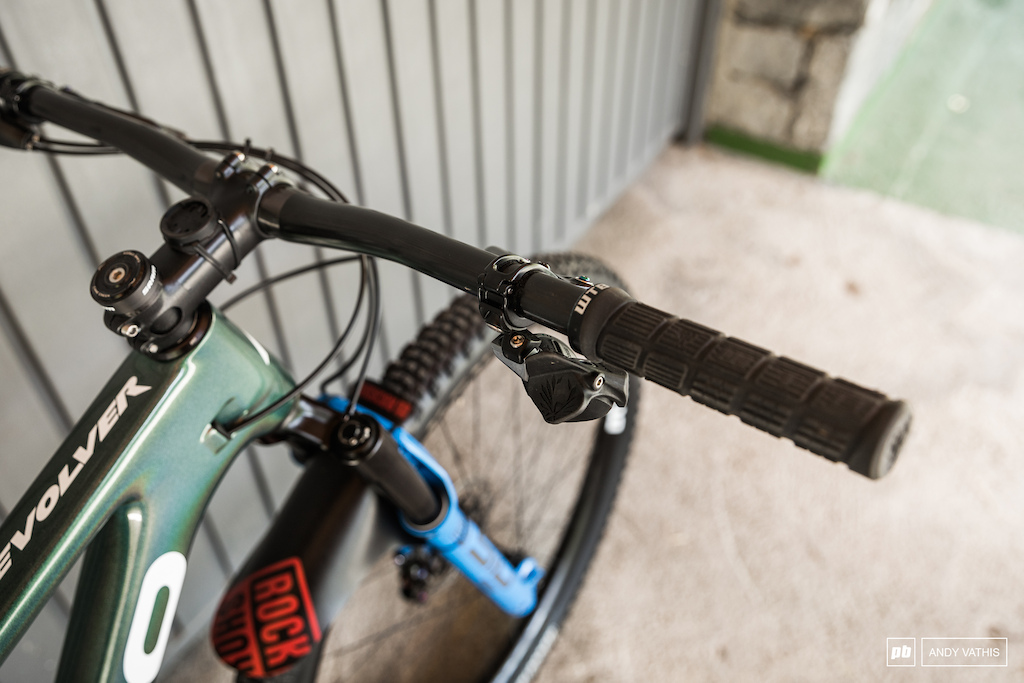 For his cockpit setup Carter Woods opted for the handmade in Germany Beast carbon bars. According to the brand's website, these have a claimed weight as low as just 147 grams. For grips, he is running WTB Wafel lock-ons rather than the light foam grips we often see equipped on XC World Cup riders' bikes. 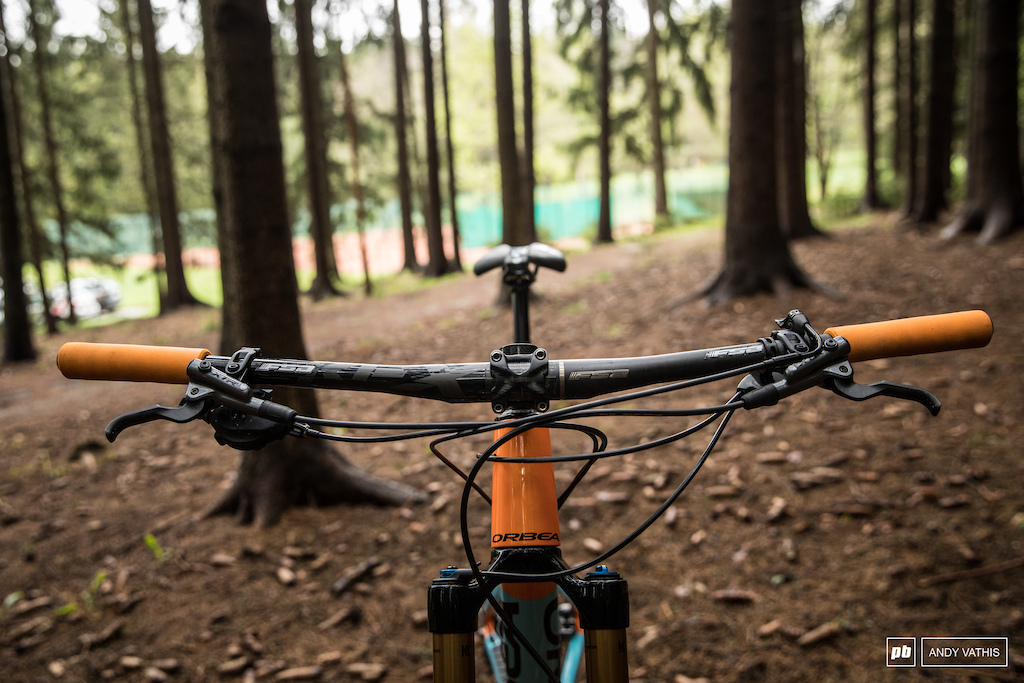 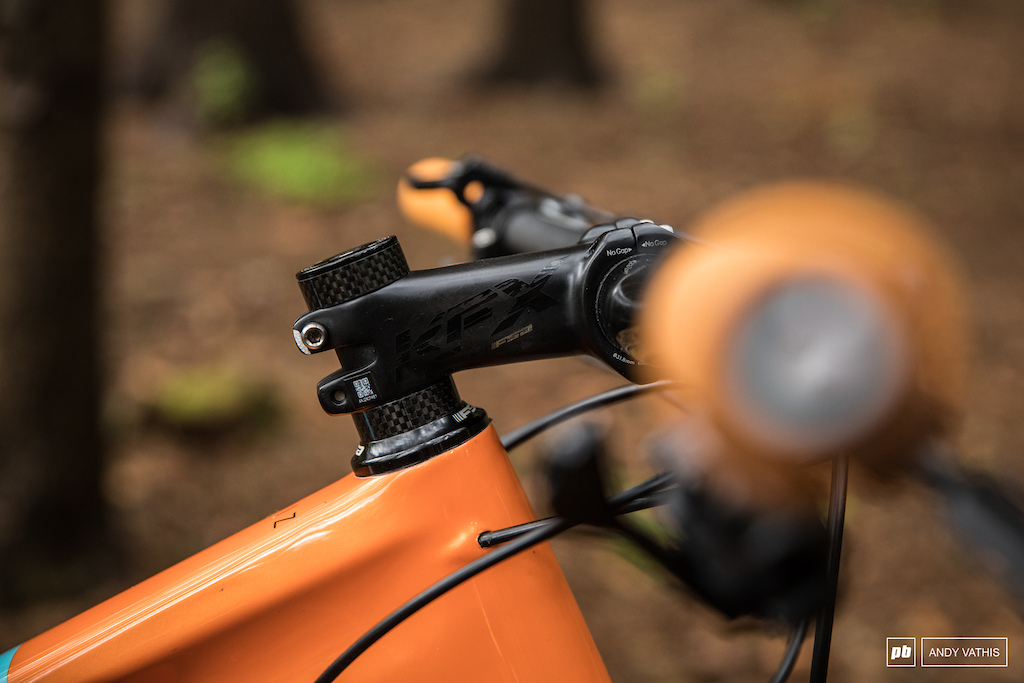 For this year he is running a full FSA KFX cockpit with some very bright orange foam grips. Victor Koretzky likes to have his brake levers all the way out and set up to grab immediately. 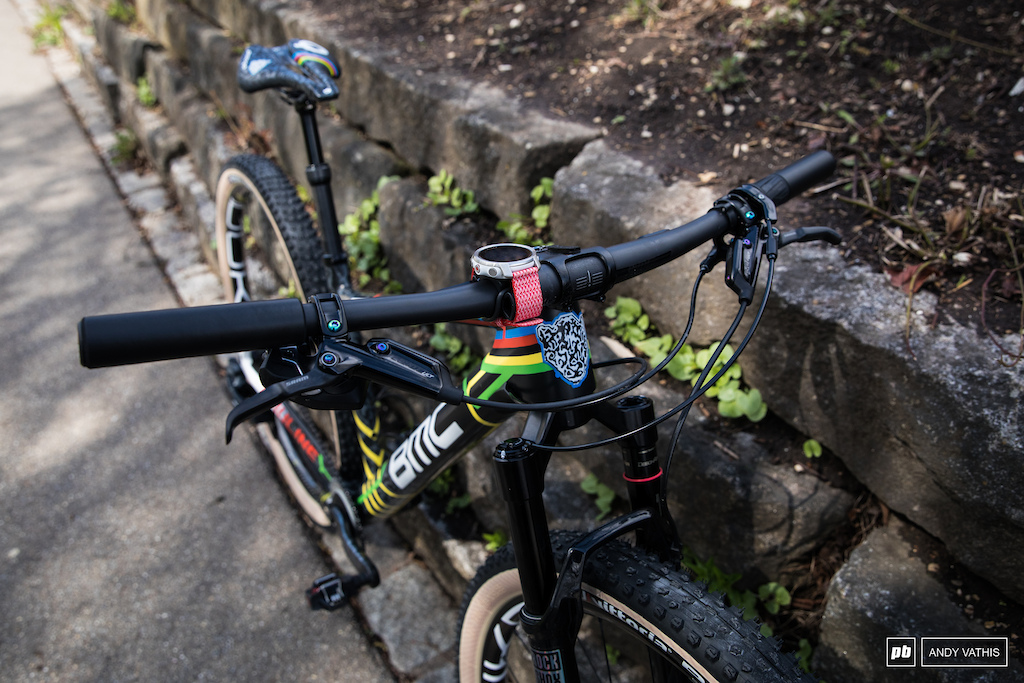 Albstadt 2021
To take on the first World Cup this year in Albstadt the current World Champion Pauline Ferrand Prevot was running a full BMC carbon cockpit. For her bars, Pauline chose a 700mm width paired to a -5 degree negative rise stem with a 50mm length. 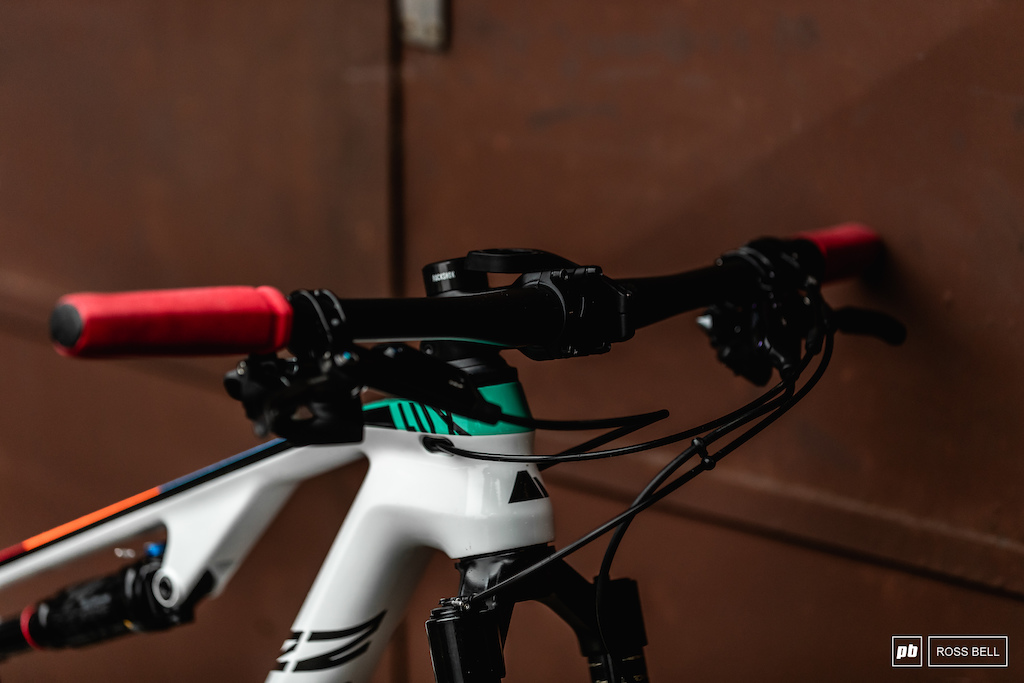 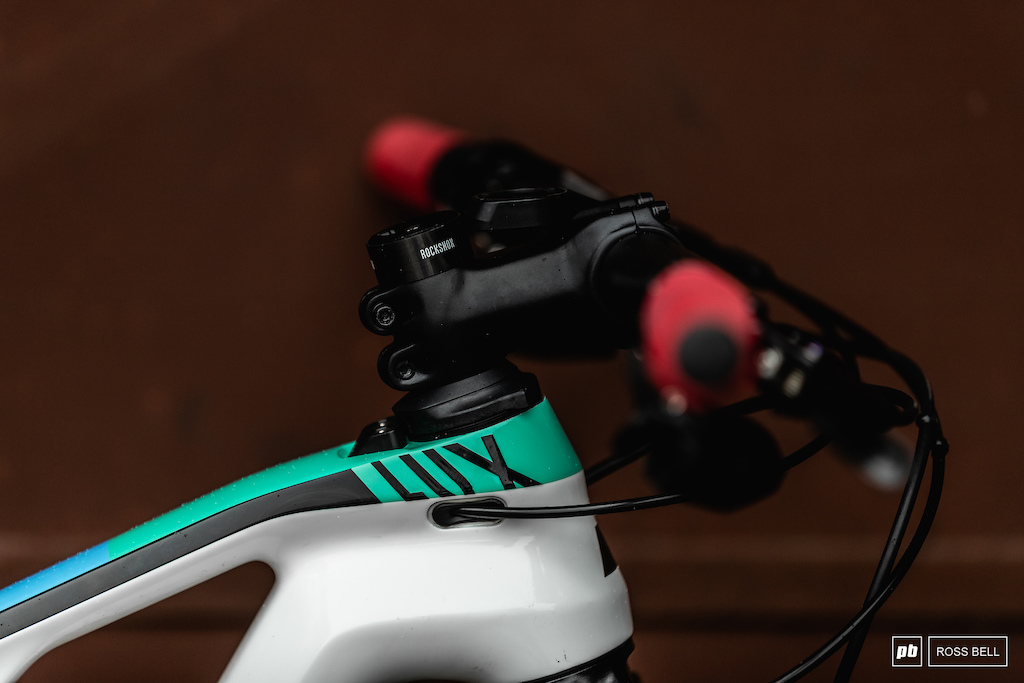 Closing out the season in Nove Mesto last year on her previous Canyon Lux race bike Pauline was still running a fairly wide for XC 700mm bar although she opted for a longer 70mm stem with a slightly bigger -6 degree negative rise stem. 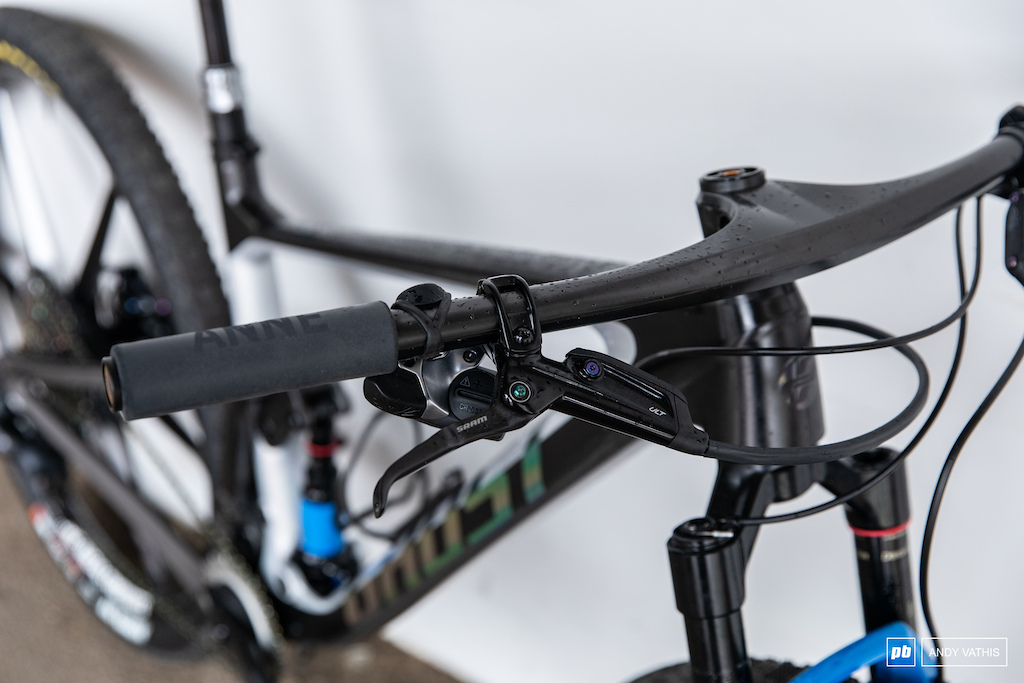 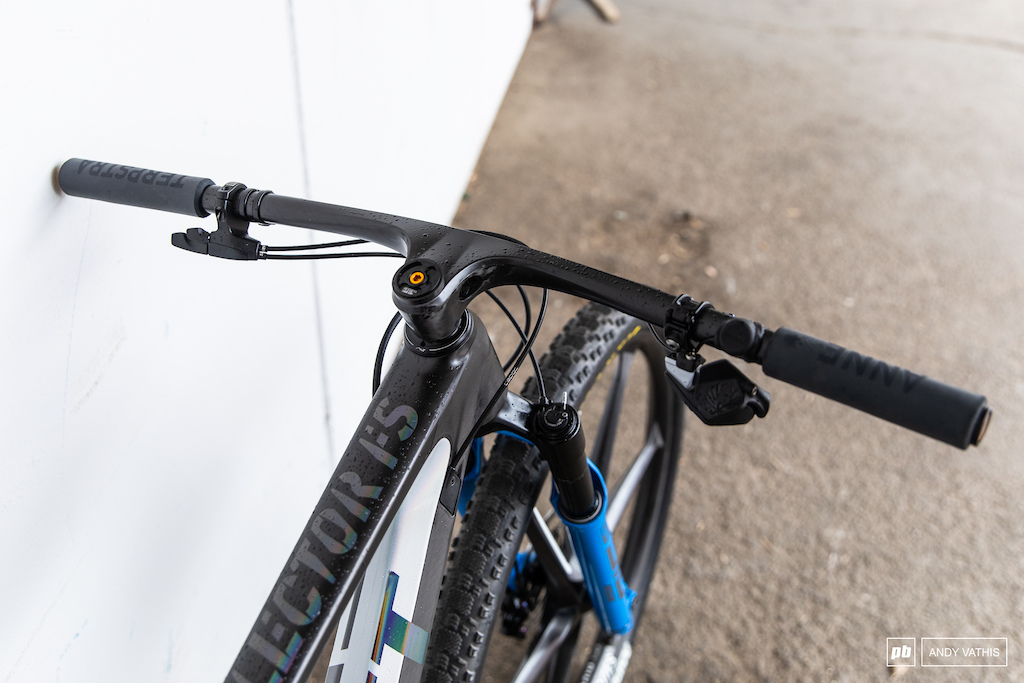 Anne Terpstra was running an integrated bar and stem combo for Albstadt this year that we are told is also from Bike Ahead Composites, although it doesn't look to be available to the public just yet. Anne has switched hers up with a lockout lever for suspension duties and a Blip device on the right side of her bars for the AXS dropper post. 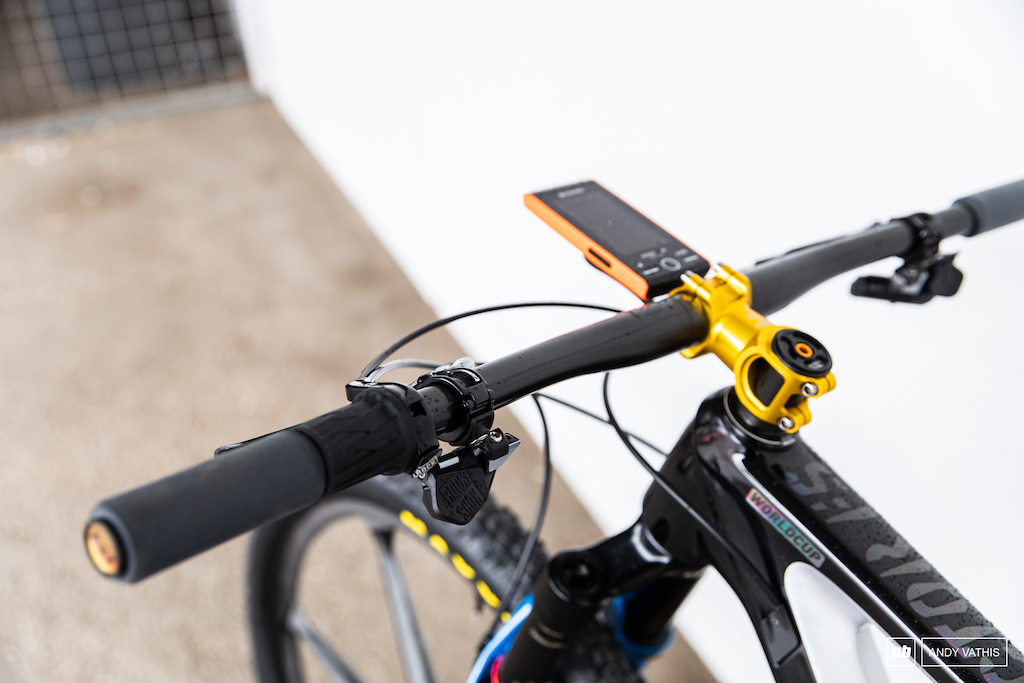 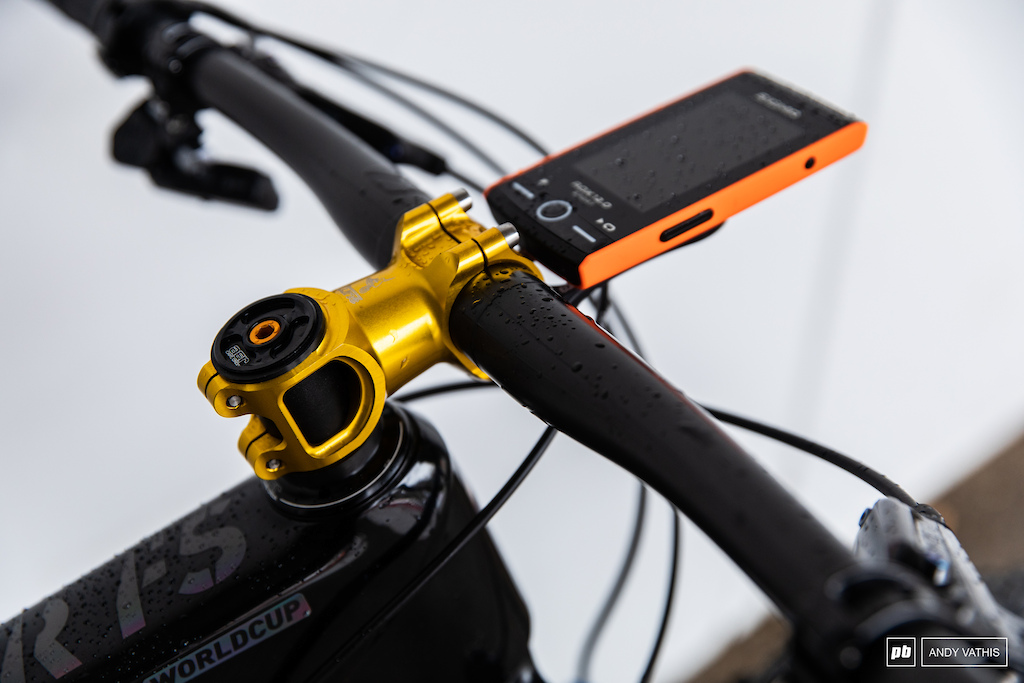 Nadine Rieder's cockpit is more conventional with a Bike Ahead Composites carbon bar and a short Tune Geiles Teil 4.0 stem in gold. Nadine has opted for a RockShox TwistLoc to adjust her suspension lockout with a standard AXS remote for the dropper. 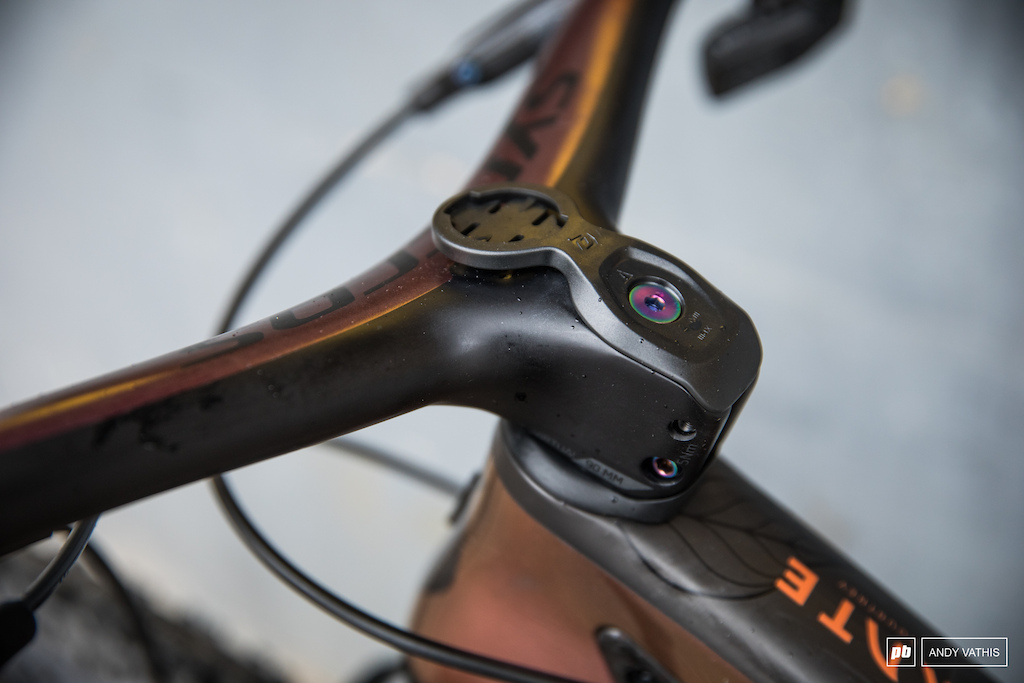 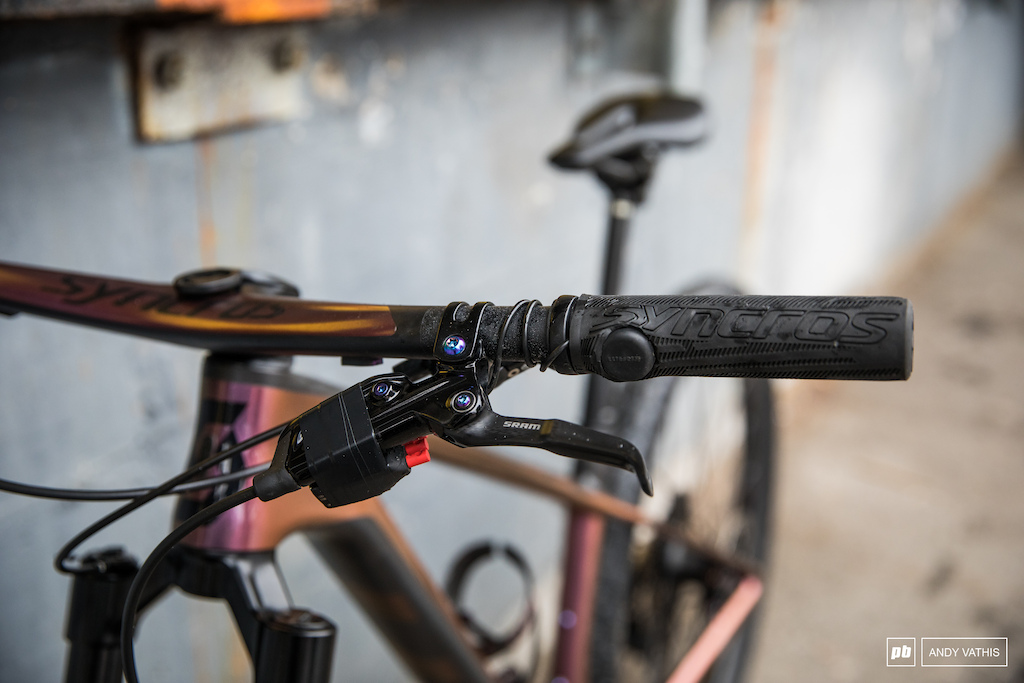 For Kate's cockpit setup she is running Syncros' lightweight carbon Fraser IC SL integrated bar and stem with a computer mount. The Fraser IC SL weighs just 220 grams at its uncut 740mm width, in the past, Kate has run these bars as narrow as 680mm. Kate is also running her custom dropper post Blip device that is mounted inside her grips for easier control. 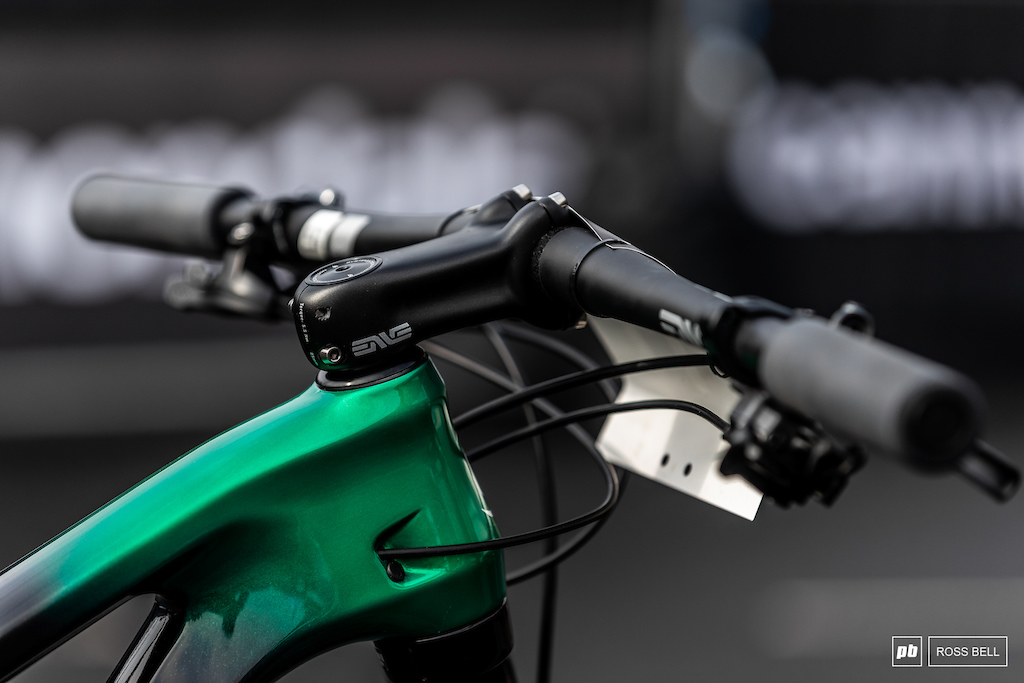 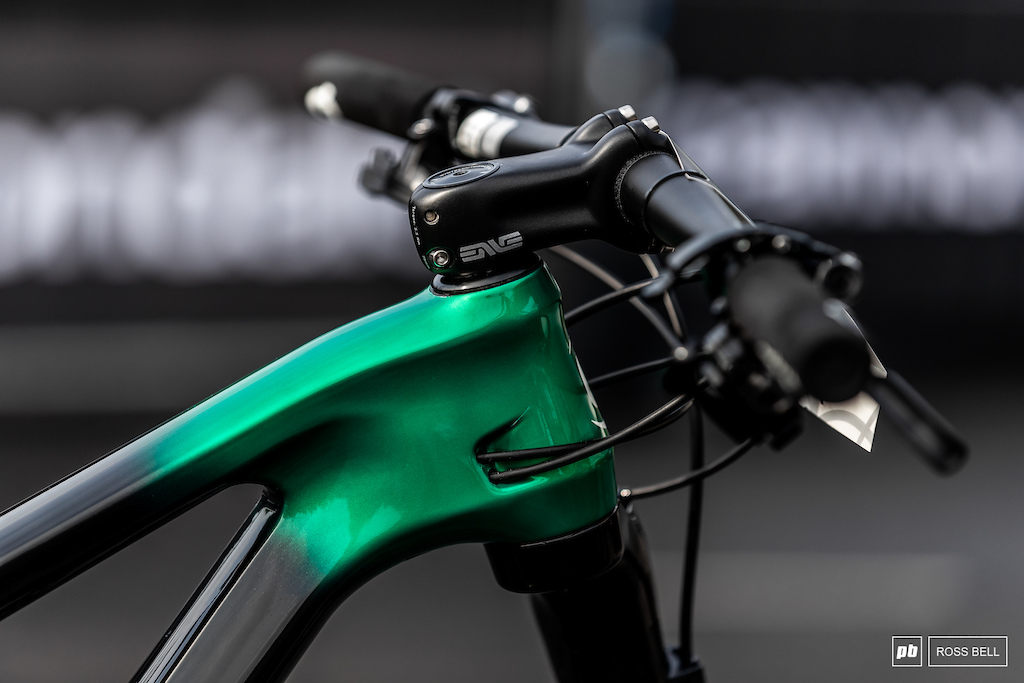 Nove Mesto 2020
When Maxime Marotte was with the Cannondale Factory Racing team he was running the narrowest bar on the team for Nevo Mesto in 2020. At 700mm wide with a -10 degree rise Maxime paired this to a carbon Enva stem. 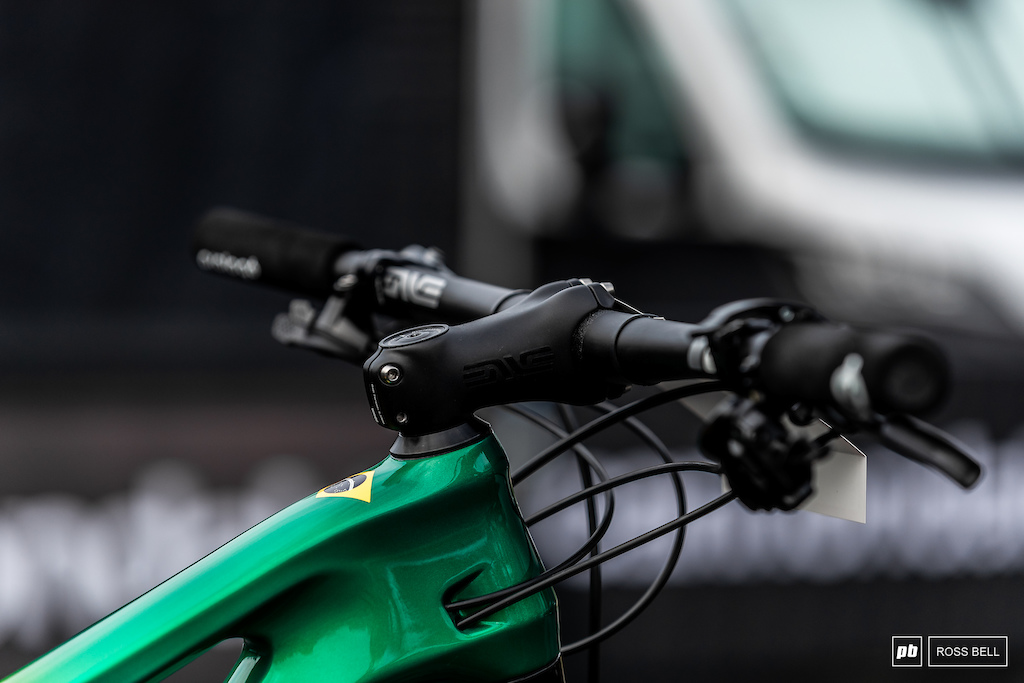 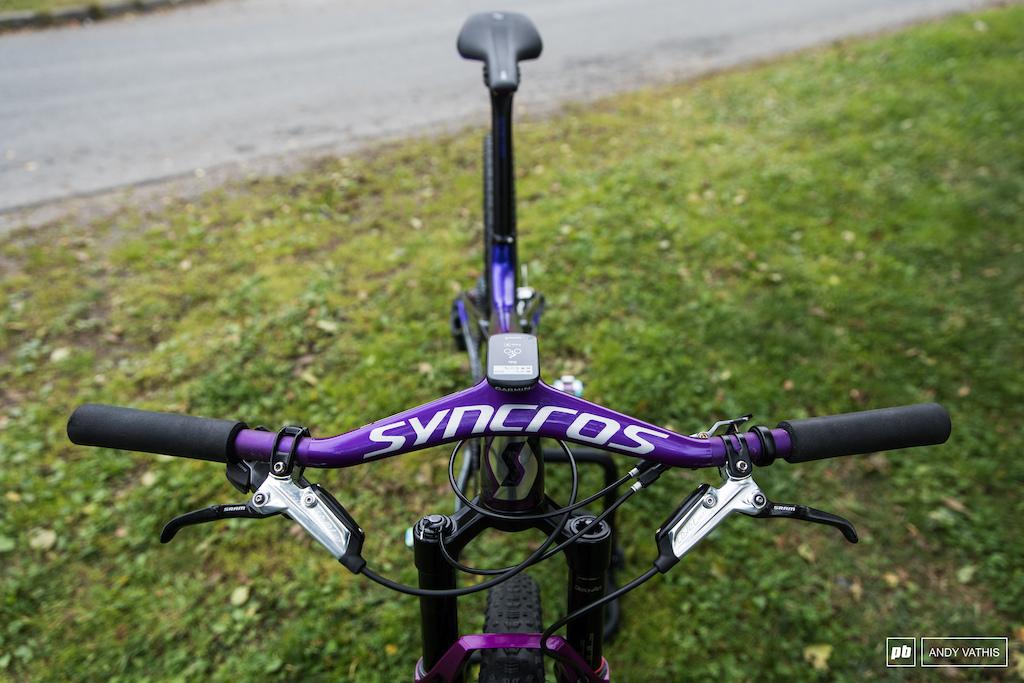 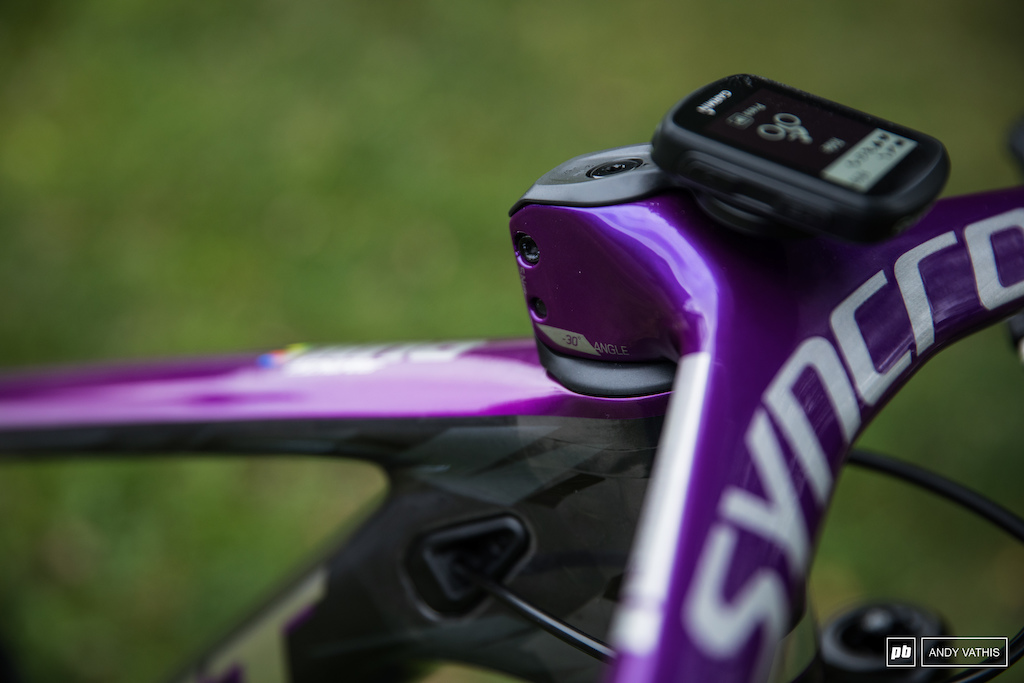 Also for the doubleheader in Nove Mesto last year Nino Schurter was running his signature integrated Syncros bar and stem combo. For the races, he was running a 680mm width and a -30 degree rise. 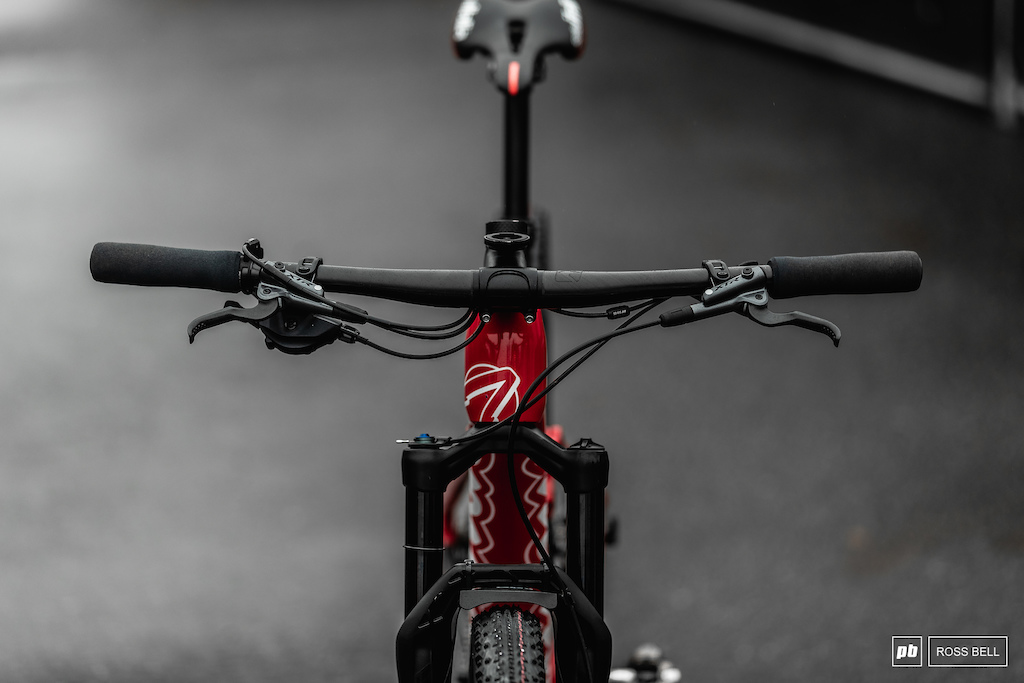 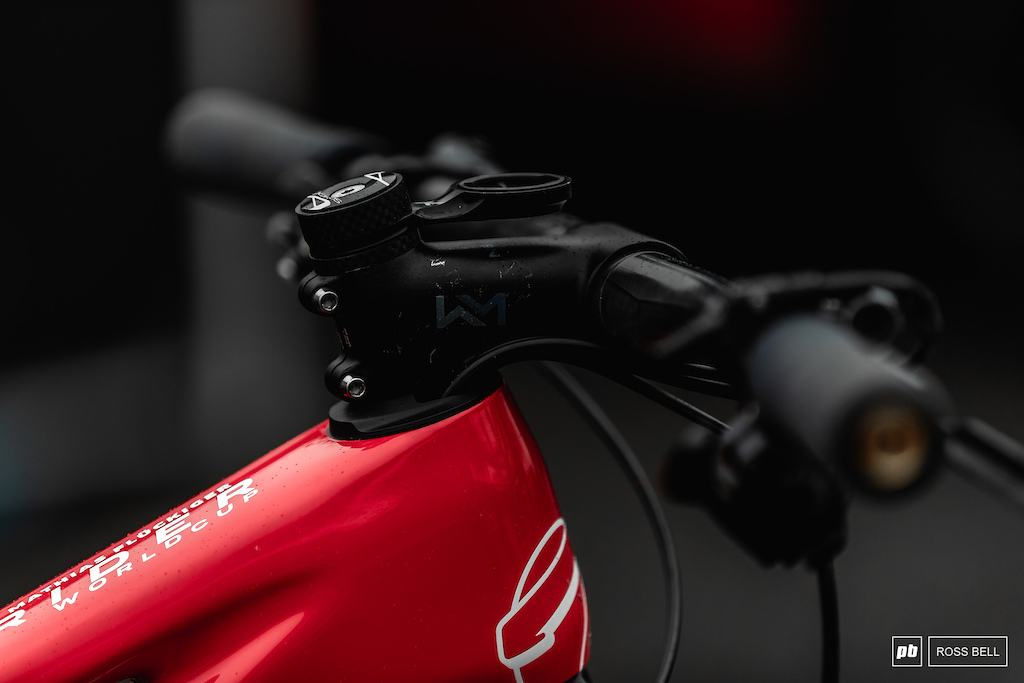 Mathias Flueckiger opted for a 710mm wide Bike Ahead flat bar with an 11-degree backsweep for the 2020 Nove Mesto XC World cups. Mathias used a long 90mm negative -17 degree rise stem from Newmen. He was running this setup fully slammed for Nove Mesto but sometimes he will raise it by around 5mm depending on the course. 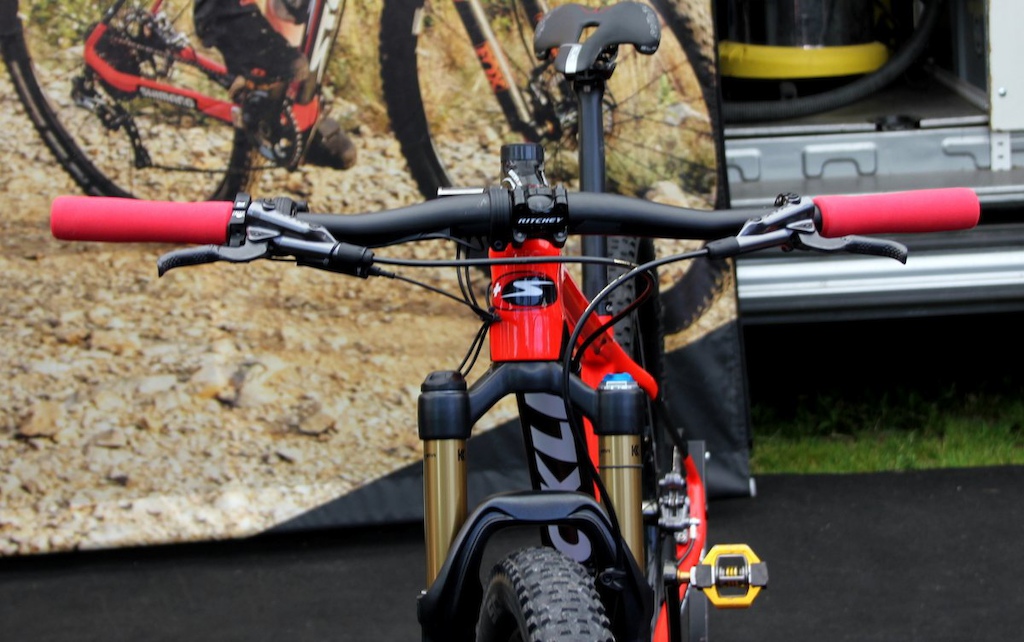 Lenzerheide 2015
Although we don't have the exact numbers on Mathias Flueckiger's setup here for Lenzerheide in 2015 he decided to run a negative rise stem and handlebars mounted upside down to get a really low front end. 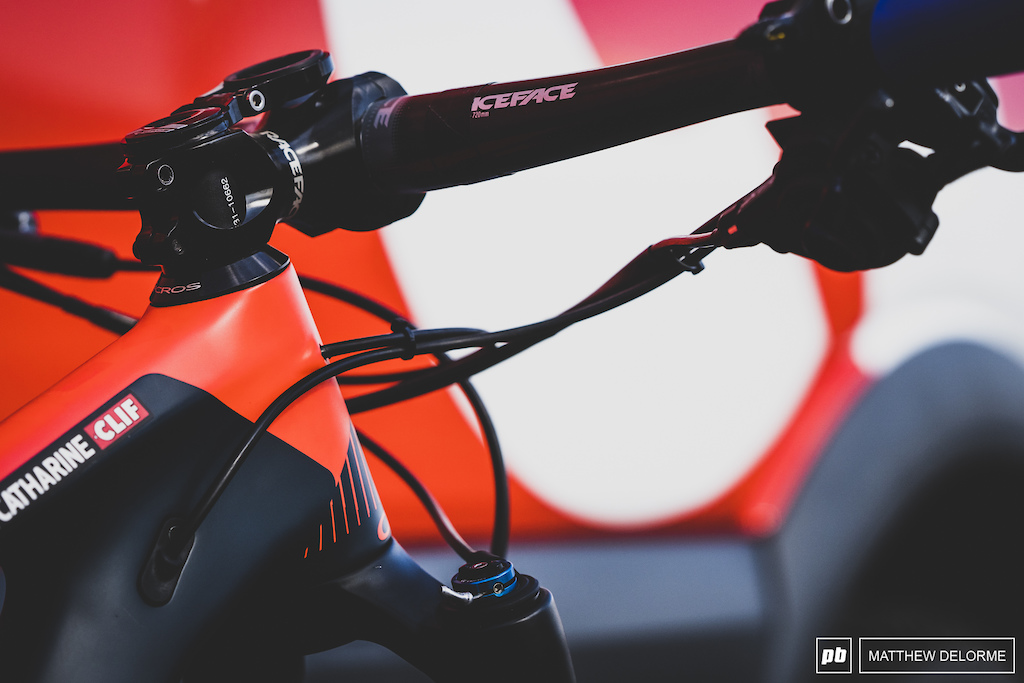 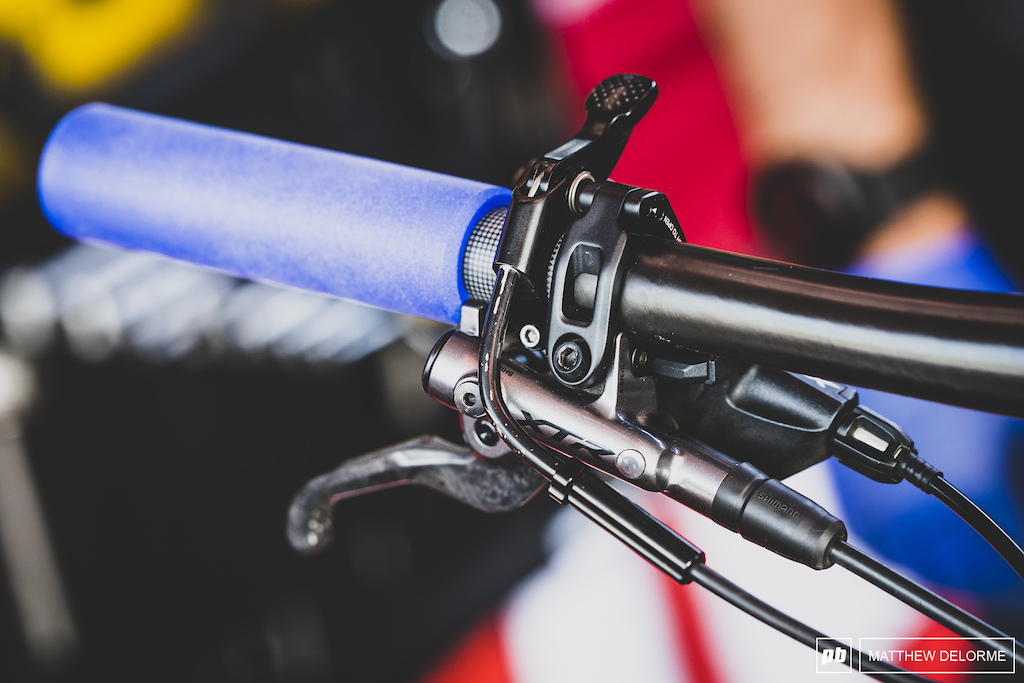 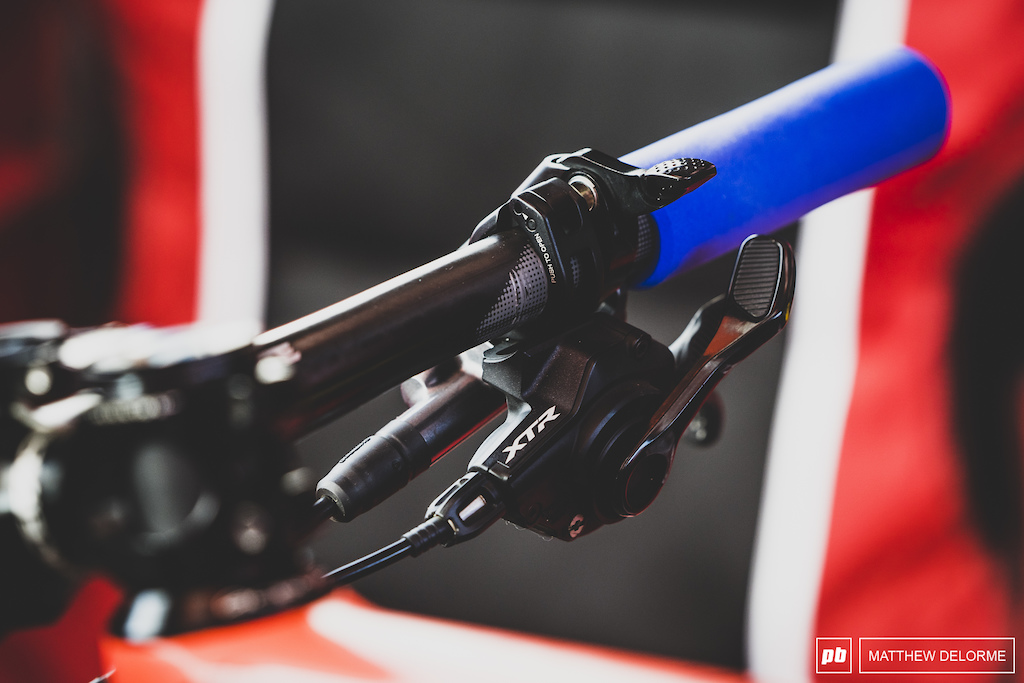 For the World Champs in Mont-Sainte-Anne 2019 Catharine Pendrel was running a full RaceFace cockpit with bright blue foam grips. Interestingly, to make space for her bike's remote lockout system she has mounted the dropper lever on the right side of the bars. 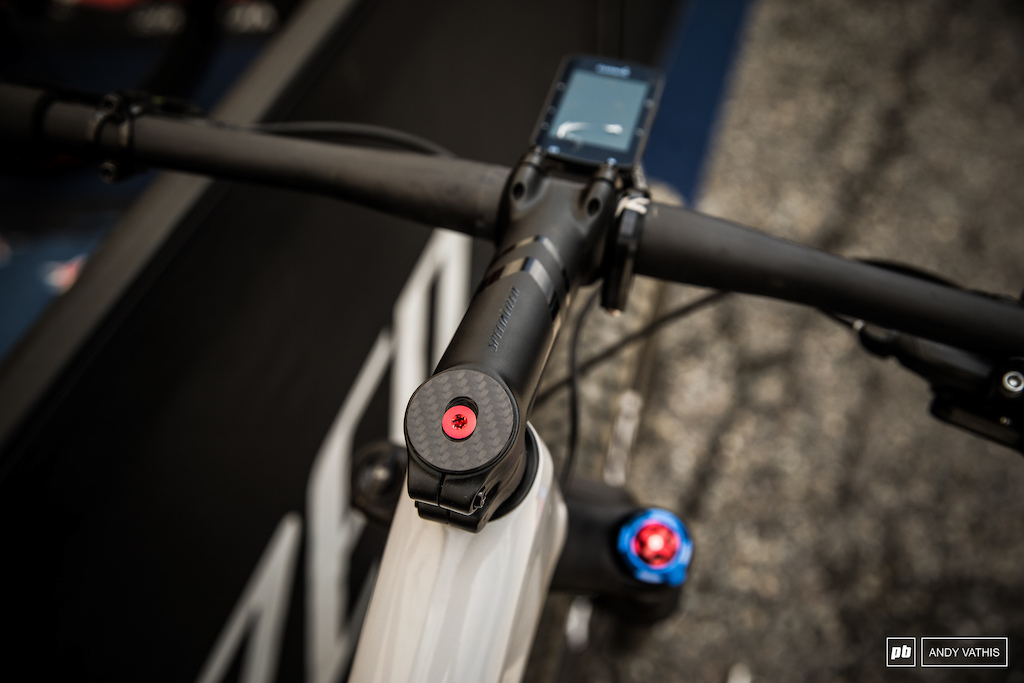 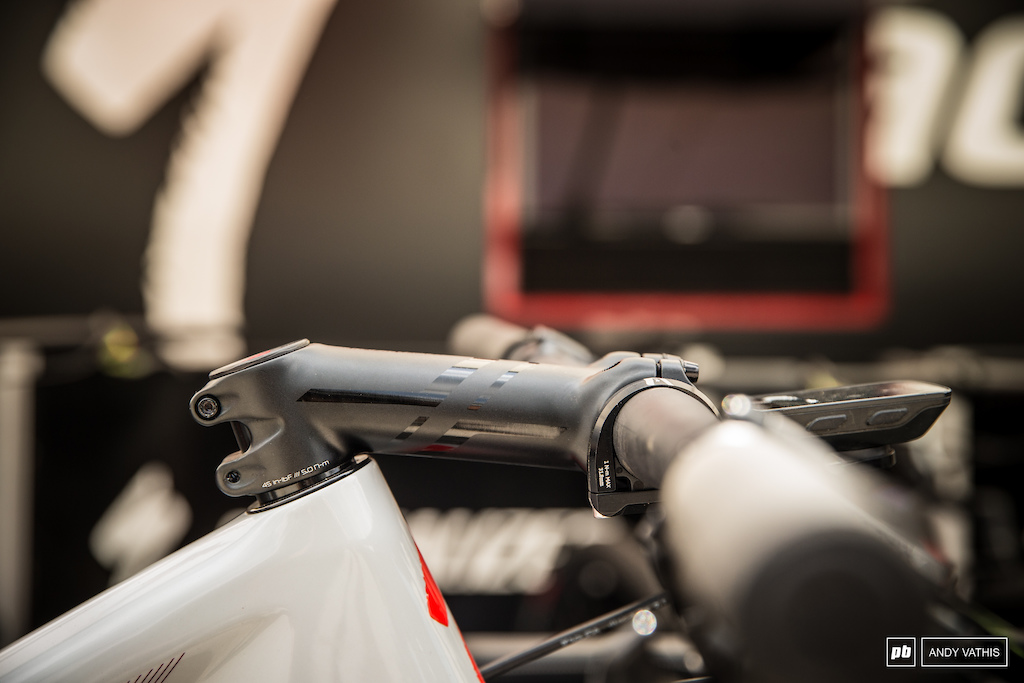 The rider who has run some of the wildest cockpit setups over the years is Sam Gaze who always seems to be running long stems. For the 2019 World Cup in Vallnord, he ran Specialized bars with a massive 130mm long stem with a -24 degrees negative rise stem.

LiquidSpin (Jun 12, 2021 at 16:56)
Remember these guys have to climb some pretty steep climbs which is where time is lost the most. Yes, they do have some gnarly descents added to the tracks in the past decade but no matter how fast they are on the downs they can't make up for lost time if they are slow on the climbs. To me it's very impressive to ride on bikes with these setups. It makes it all the more intense to watch them go lap after lap.

Austink (Jun 12, 2021 at 19:21)
Pretty sure that is one in the same. I know on the road side they just label a stem as the length and the angle. Usually it has logos that look correct regardless of orientation.

Loshmi24 (Jun 13, 2021 at 20:06)
I am very curious about Carter Wood's setup. I have the feeling he is sizing down to compensate for Norco's crazy long bike. I don't know how tall he is, but I had that impression since that article about his bike setup. According to Norco, 60 mm stem should be always used on Revolver since the bike is designed for it, but I have the feeling Carter's stem is longer.
Something already seen on Mondraker in this article www.pinkbike.com/news/bike-checks-5-xc-race-weapons-from-the-2019-nove-mesto-world-cup.html.

JohanG (Jun 14, 2021 at 4:43)
Interesting that Vittoria would discontinue a tire that is being currently ridden at the top level.

SuperHighBeam (Jun 14, 2021 at 11:20)
Gaze's stem looks so steeply angled that it may actually rub on the head tube. Clearance is very low there.

jclnv (Jun 12, 2021 at 17:42)
Look at Nino’s ridiculous position then go watch the new Spark vid.
Below threshold threads are hidden

TypicalCanadian (Jun 12, 2021 at 23:15)
Yeah they should change them to look cooler, because who cares about going fast in a race if you don’t look cool?!?

Ginsu2000 (Jun 12, 2021 at 19:37)
Check out Jared Graves' XC rig that he's currently racing on www.ambmag.com.au/gallery/bike-check-jared-graves-yeti-arc-562045 but hey what does this Jared guy know about descending and setting up a bike appropriate to the demands of the specific event type?