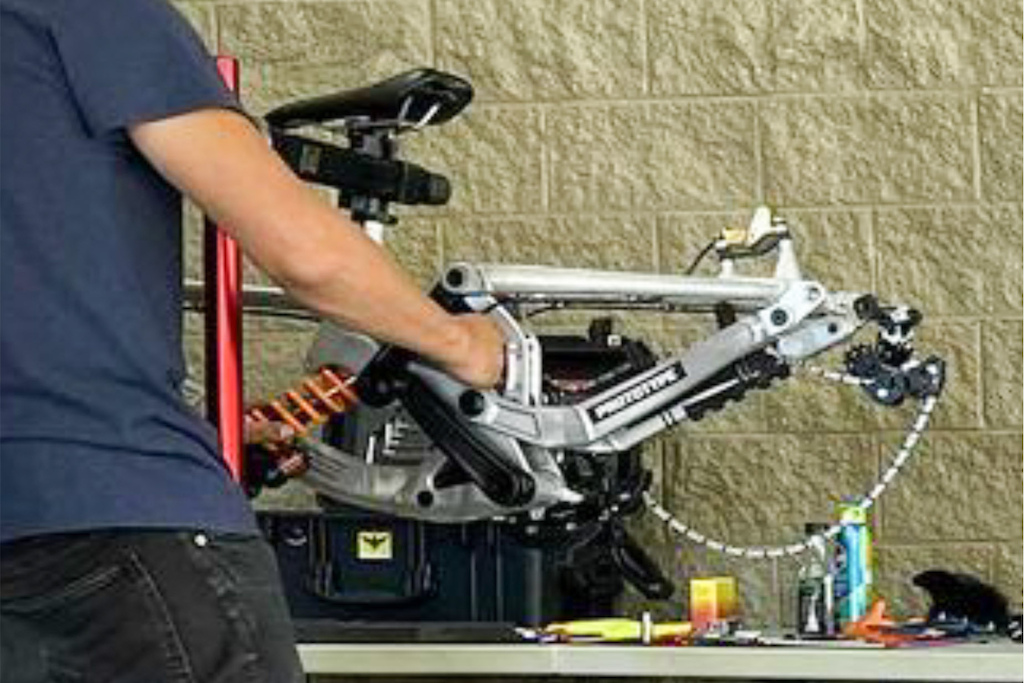 Jeff Steber has shared some shots on social media of some off-season prototype testing at Windrock that reveal another new DH bike.

Whereas the previous prototype ridden by the Intense team this season had a high pivot, four-bar design, with a massive rocker link driving the shock and a recess in the downtube, this looks completely different. Gone is the downtube recess and the massive rocker link but looking at the chainline it appears that it will still feature an idler.

When we interviewed Jeff Steber about the other prototype earlier this year he did hint that he had another design in mind that could switch the four-bar design for something with a "more complicated six-bar design." 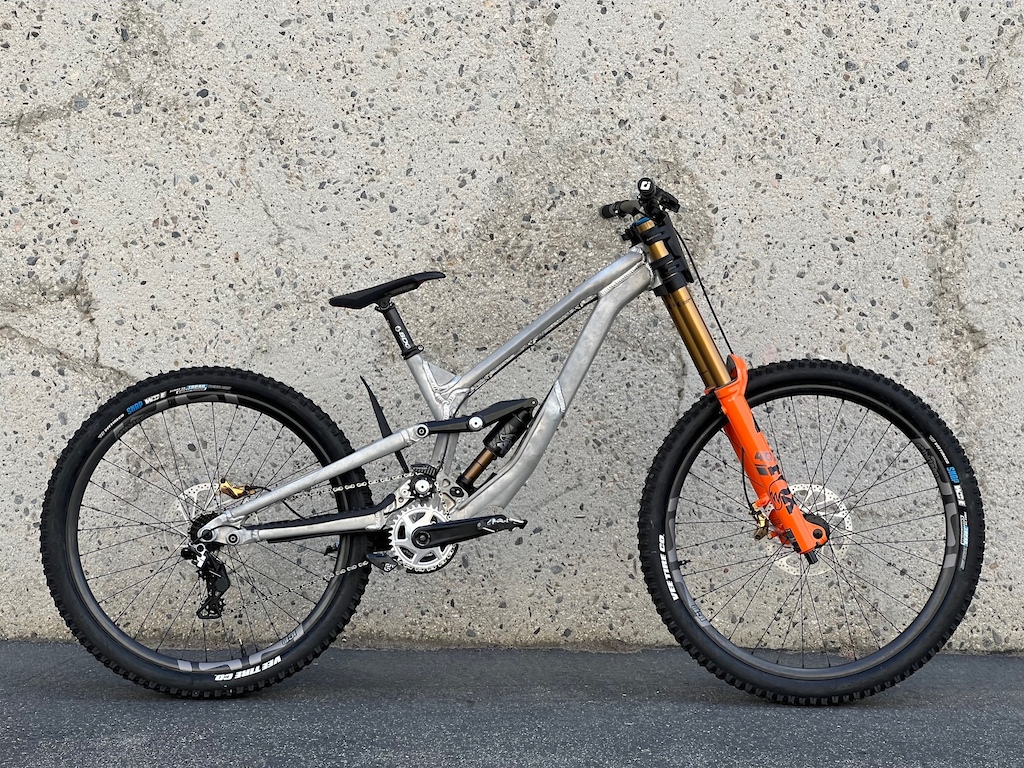 The prototype ridden by the Intense team this year. 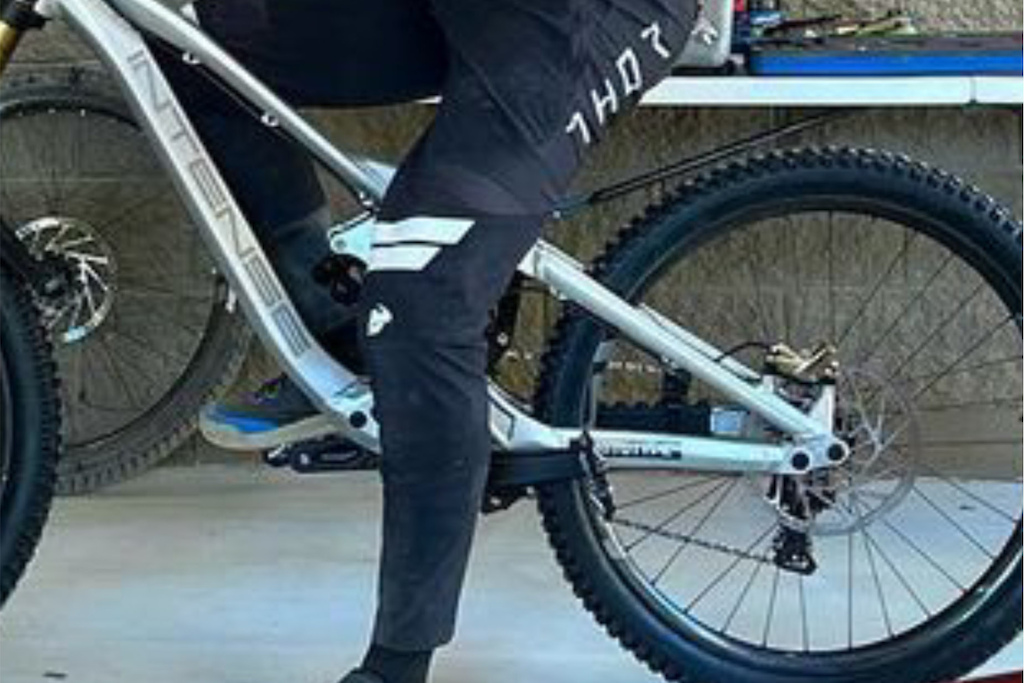 The prototype being ridden by the team this week.
After seeing Jeff's post we reached out for more details and he sent us this: "This week we spent four days at Windrock bike park in Tennessee testing the new prototype with Intense Factory Racing (IFR) teammates Aaron Gwin and Dakotah Norton. This two-year development project started at the end of the 2021 World Cup season with extensive benchmark testing done and a decision to produce 2 prototypes for IFR and one would become the next generation Intense M279.

"The first prototype HP4 (high pivot 4 bar) was designed and built first as it was a simple design and would get us up and running quickly, the bike was raced and evolved through the 2022 race season with progressively improving results from IFR racers. The HP6 (High Pivot 6bar) prototype was designed and evolved behind the scenes with learnings from the HP4 incorporated. This project from day one has taken a learn it all approach vs a know it all approach and yes we learned quite a few things along the way. 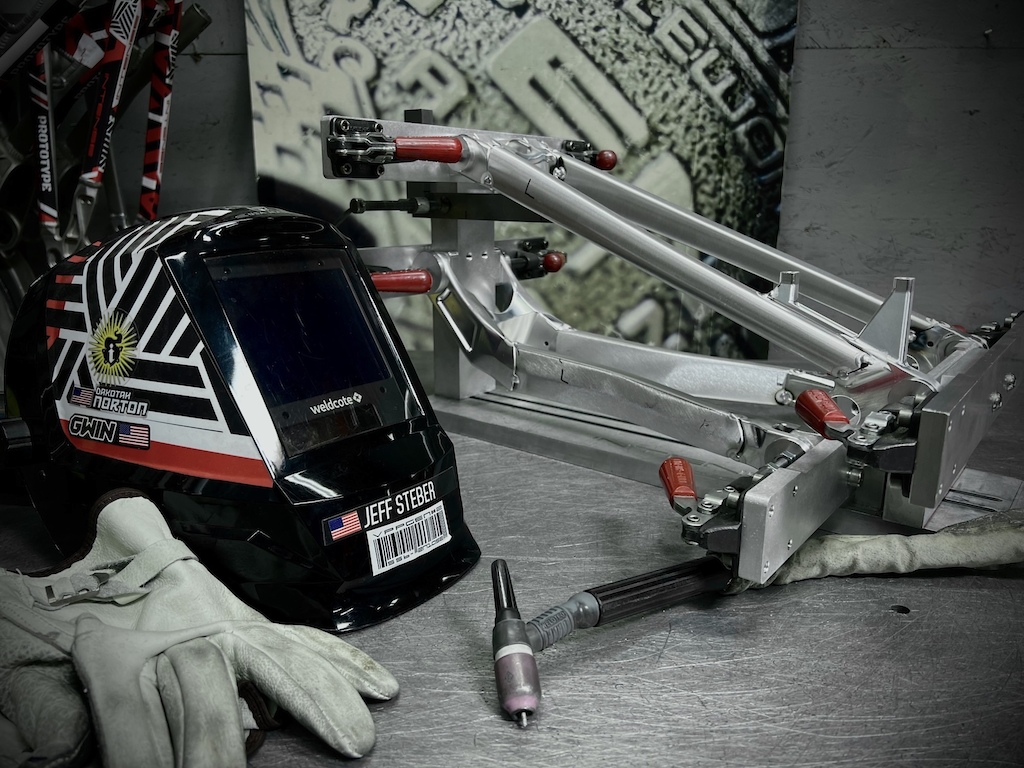 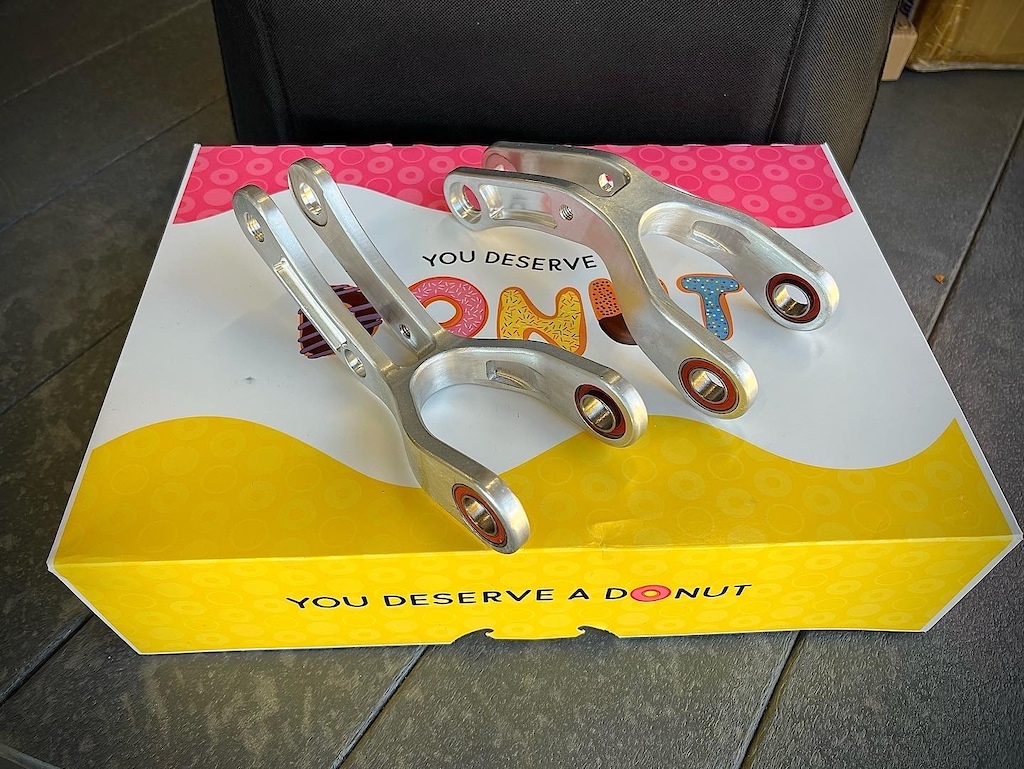 "The test camp started with AG and DAK doing warm-up laps on the HP4 followed by first runs on 2 of the first HP6 bikes that I fabricated for back-to-back comparisons, suspension tuning including different link options to achieve different kinematic profiles. Our Ride Dynamics and Suspension engineer Devon Sullivan was doing laps on a full 29” wheeled version. Needless to say at the end of the test camp we retired the HP4, it served us well on this journey."


by edspratt
Views: 6,747    Faves: 1    Comments: 0
First run reaction from Aaron Gwin and Dakotah Norton.
It sounds like the previous four-bar prototype will no longer be raced by the team with the focus switching to this new design. We don't have any more details on the full setup just yet, but we will most likely hear more as the off-season testing progresses and we get closer to the 2023 race season.

Even better yet, have the paint team mask an Intense logo before polishing — to then reveal a raw-finish gen 1.0 INTENSE logo.

And maybe do some turquoise ano, or black base + red splatter ano, on the links — a throwback to some of Jeff’s first Intense bikes from the early/mid 90’s.

ihsik (Oct 27, 2022 at 13:01) (Below Threshold)
I wouldn’t get your hopes up. Quality control is too tedious and to make a good quality, in the end, it would cost us about as much as a carbon bike. As awesome as aluminum bikes would be I don’t think they are in the near future.

b-mack (Oct 29, 2022 at 20:25)
The 951 from years ago was plagued with problems of cracked frames and poor weld quality….I saw many first hand. A welder friend of mine said that they concentrated too much on how a weld looks and not enough on penetration, and a proper HAZ (heat affected zone). They are famous for bad heat treats over the years too. I feel like a lot of the move to carbon for Intense was for consistency and reliability. I LOVE alloy bikes but if you can’t do it right, at least carbon keeps your bikes on the trail.

acdownhill (Oct 27, 2022 at 12:13)
Ah yes, the classic stage of intense bike development when I can bear to look at it without a welding mask on.

hubertje-ryu (Oct 27, 2022 at 12:19)
Intense gets a lot of bad comment the last 10 years or so, but it akes me happy to hear Jeff is still personally involved in this. Now give us back the aluminium welded caisson dream machines.

Aksel31 (Oct 28, 2022 at 1:43)
I think many complaints come from this frustration to see a brand that was making some badass alu bikes slowly drifting into the asian made souless carbon bikes with questionable aestethics territory.
+ some questionnable decisions and some issues on their factory team have not help their cause haha

Looking forward to another season watching Aaron and Dakotah together. It seemed like they were really starting to find their groove towards the end of the season, and curious to see how it evolves.

hamncheez (Oct 27, 2022 at 12:38)
"I don't want to wait 9 months for racing" Welllll the rest of us might not have to wait at all! www.slashfilm.com/1070400/warner-bros-discovery-to-axe-2-billion-worth-of-movies-and-shows-as-part-of-brutal-cost-saving-efforts

likeittacky (Oct 27, 2022 at 20:11)
@ogjew: Neither have they produced important information to riders or teams that is desperately needed leaving so much in limbo for the next season. The Team fees are astronomical if the rumor holds true!!!

dthomp325 (Oct 28, 2022 at 19:58)
The contract almost certainly states they give the rights up if they don’t actually film and broadcast… Or at least I sure hope it does.

Reno233 (Oct 27, 2022 at 17:00)
Not overly complex if it works better than the alternatives. My enduro has the best rear suspension I’ve ridden in the 25 years since I’ve been doing this. Zero issues too.

Compositepro (Oct 27, 2022 at 14:09)
Can we replace spotted with development news or full press release about building a new bike

Primoz (Oct 27, 2022 at 21:38)
@Pinkbike (or @brianpark ) you have someone on staff (Dan Roberts) who knows all the details about suspension design, how in the hell can you repeat the same mistake of calling a 4-bar bike (given the pics it looks very much like it's a 4-bar with a scissor link driving the shock, not confirmed, but by that logic a 6-bar design is also not confirmed) a 6-bar? Specialized stuff in both written and video form, the Polygon proto, now this, all cases of standard 4-bar Horst-link bikes with an additional linkage to drive the shock, yet all of them are called 6-bar by the site.

Educate your staff and stop making the same mistakes.

Primoz (Oct 28, 2022 at 12:28)
@thegoodflow: ah, I'm used to it. It's normal to get downvoted over here if you make an objective comment. Gotta say, the crowd over on Vital is a lot more friendly overall and the level of discussion is a whole lot higher too.

AndrewHornor (Oct 27, 2022 at 23:11)
Not sure if it counts as "spotted" unless the picture is taken from under a truck... Or maybe if the item is reflected in some chrome on a coffee maker?

blowmyfuse (Oct 31, 2022 at 6:49)
I like how the complete bike, linkage on full display, rolls by under the engineer at the :31 second mark of Spratt's video & Spratt doesn't bother to use the HD version of his own video to the show complete frame and linkage in all it's glory.

joemoto (Oct 27, 2022 at 16:39)
Some time in between making these rad DH prototype race bikes. Can you guys fix the down tube on the Ebike? Please

jmhills (Oct 28, 2022 at 4:30)
Real question here: is there no UCI rule that states that the bikes raced must have a certain number of frames produced? Like some sort of homologation rule that exists with motor racing (minus F1, of course).

yoki-bike (Oct 27, 2022 at 13:20)
I like this approach. They are taking their time to develop something great instead of just punting out the first thing that works.

AveryElla (Oct 28, 2022 at 9:12)
Aaron and Dakota seem really happy with it, even despite it being a very early iteration! Can’t wait to see how they do on this bike next year!

yeeeeoooww (Oct 31, 2022 at 5:54)
So let me get this right, just as IFR become competitive on their current bike they change design again! To be fair that has worked out in the past.... oh wait

steezysam (Oct 28, 2022 at 6:35)
@billlite:
Dak definitely had issues with how heavy and not nimble the last bike was

mrkamot (Oct 27, 2022 at 23:04)
One thing is for sure, the backdrop will always be the concrete wall of the Intense workshop

moodgedog (Oct 29, 2022 at 7:15)
I'm still waiting for a M29 frame that was going to be sent months ago, it's end of October now, season is over and agin i still am waiting.... Thanks Intense for not giving a fuck about actual customers... as usual.

vemegen (Oct 28, 2022 at 4:10)
it seems intense engineering team is recreating all the suspension designs from other manufacturers from past 10 years

Kmccann137 (Oct 27, 2022 at 11:58)
Meanwhile looks like Specialized going back to a simpler design. Sounds like they want to do something complex just for the sake of it.

singletrackslayer (Oct 27, 2022 at 14:10)
Complexity gives marketing more opportunities to obfuscate with bullshit word salads. Meanwhile, I rode a single-pivot Heckler with an RP23 the other day and it kicked ass. Granted, it was a 0.5-mile ride on a paved trail to the liquor store, but still...

MGPnzl (Oct 27, 2022 at 14:18)
Sounds more like after back to back testing the Intense HP6 was faster/easier to ride/more confidence inspiring/rider preferred than the HP4.

With the huge and funny shaped shroud on the prototype Specialized I wouldn't put money on it being simpler than the current bike at all.

singletrackslayer (Nov 5, 2022 at 19:19)
@somebody-else: hence, the part in my response about the flat trail. guess my jokes are way too sophisticated for this audience.

Daweiknowdaway (Oct 27, 2022 at 17:50)
is it just me or does intense have a shit ton of prototypes and their bikes are actually not that good (too stiff/too harsh) and not usually that liked by reviewer???

Eland (Oct 27, 2022 at 11:50)
Wow that’s one ugly bike. That rocker looks like it’s been installed incorrectly (even though it hasn’t). I suppose you might see it as a good thing…that looks are not driving the development…but if the end result is Frankenstein’s monster…it’ll be the bit of pinkbike commenters for years to come!