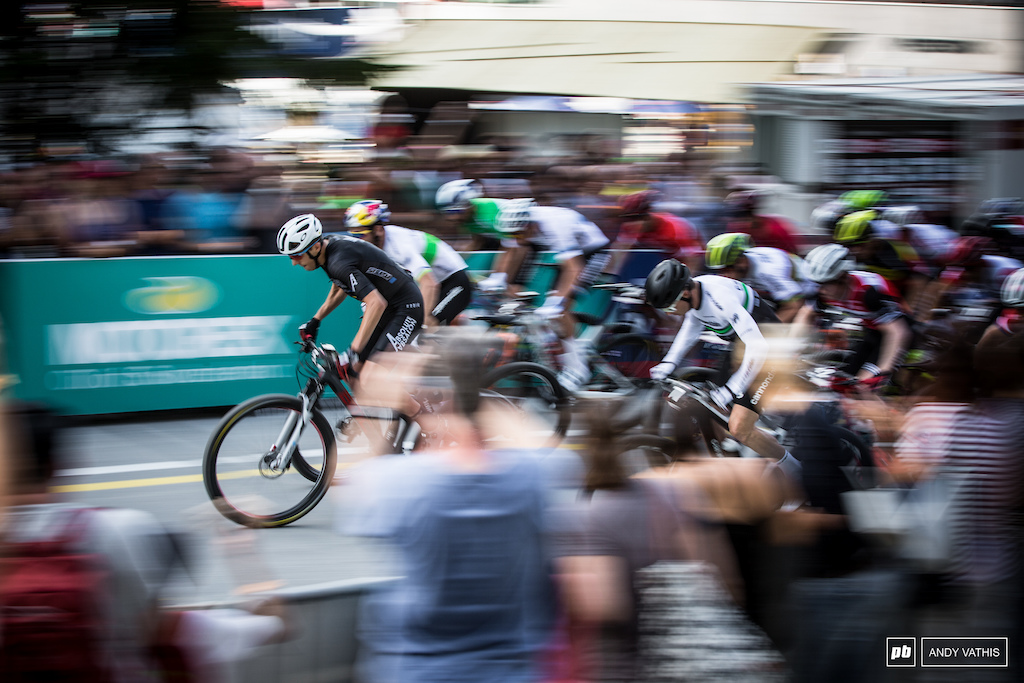 We are back for another round of flat out XCC racing in Lenzerheide. Here are the results from the XCC Short Track Round 5. 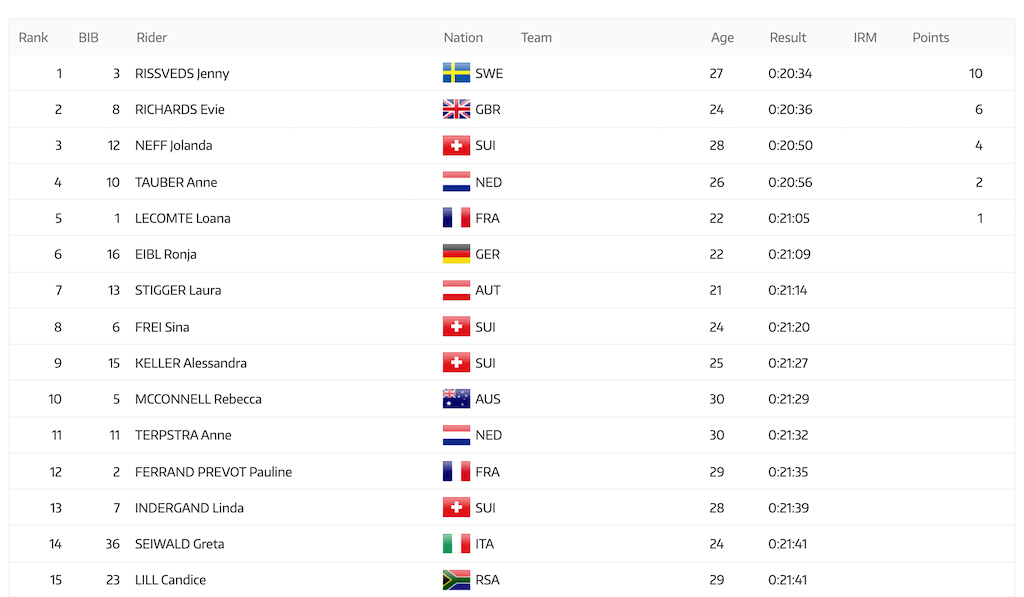 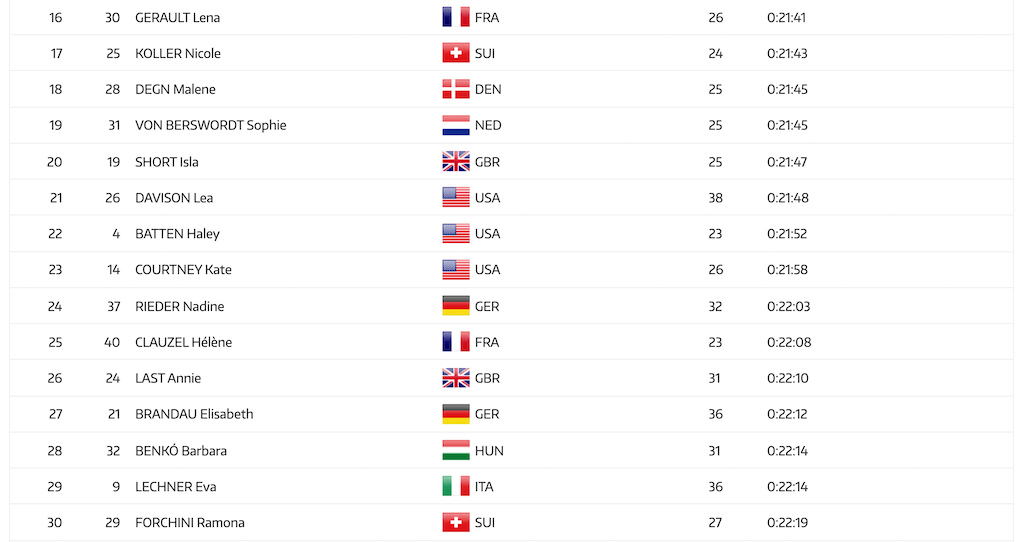 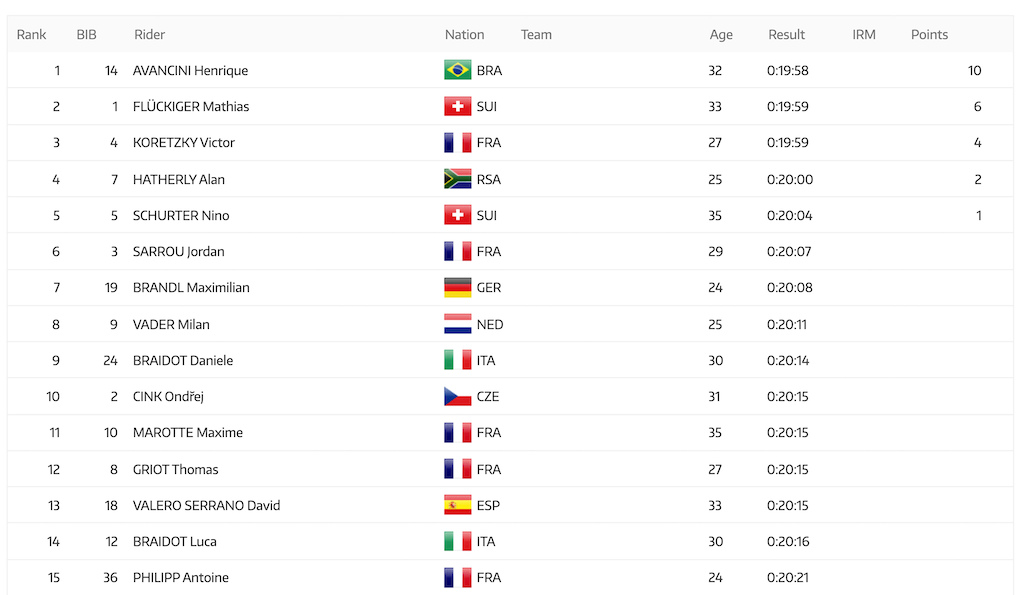 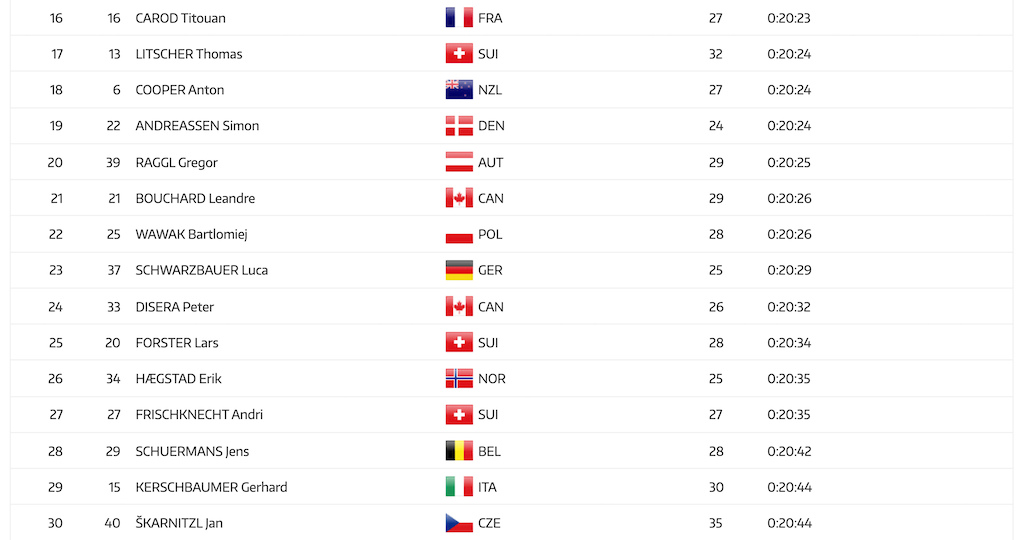 sergiocrzbtt (Sep 3, 2021 at 16:29)
Matthias "Flickered" the number 2!
Is it just me or the guy suffers like no other in the pack? He goes really deep when he pushes the attacks...

SvenNorske (Sep 3, 2021 at 11:56)
I'm curious with the drastic inconsistencies in the American women. Courtney and Batty go from winning races and championships to mid pack.

bikewriter (Sep 3, 2021 at 12:13)
Batty isn't shocking, but Courtney sure is. Heck, when Grandma Lea beats Haley and Kate.... But I did get a 4iiii email blast that Emily is their latest sponsored athlete.

Willikers (Sep 3, 2021 at 13:09) (Below Threshold)
Natural selection. Despite what her Instagram would have you believe she does not possess the Send gene, nor is she willing to work to get it.

When Yolanda can pretty much ride through the entire field in 21 minutes that tells you:

She's flying
The course is technical
She loves it

On such a course I'd expect to see PFP a little behind Neff and KC further back, legs being equal.

As the courses become more interesting the most complete rider will rise to the top, despite what the individual rider's social media accounts bombardment of 'message' will try to hammer into your brain.

swellhunter (Sep 3, 2021 at 17:47)
Halley gets a pass. She needs to get her coaching and training sorted out this off-season. She came in peaked and clearly couldn’t hold it illustrating her base was too weak and it was unsustainable. I see her ceiling very high if she trains right.

Kate also gets a pass. I think her early form was where she should have been and was potentially building up to a peak at the right time but she got bit by racing tough luck and very bad timing in her program. When this happens at critical times in a phase the drop off can be immense - she really will not get back until she can do a long aerobic bulk block this off-season.

If you look at Jolanda there is a lot to be learned that many mountain bikers don’t get. Her injury slowed her down and she was forced to do more of an aerobic base phase with strength training. This base is what’s evident in her Olympic peak and current form because it allowed her to use the first few WCs at actual bulk work.

It’s such a razor thin line - I predict (and I hope I’m wrong) that LeComte is next to get bit. I don’t see her able to hold it for the last few races. If she does IMO it means her level is a notch higher than the field.

Then after all of that you have to add that you just may not feel that good that day. And if you are 98% in these fields that’s 10+ positions all day.

DBone95 (Sep 3, 2021 at 17:53)
@Willikers: Horseshit. So I guess Kate's Rainbow Jersey, World Cup Overall Championship and multiple World Cup wins were also just a figment of her Instagram? Kate has already acknowledged that she and her team have made mistakes this year, but not being able to ride techy tracks fast isn't one of them. She's not Jolanda... who the f*ck is? But she's just as good as anyone else in the rest of field.

If your reading comprehension were better you would see I was saying her self- hype doesn't doesn't hide the fact that she completely freezes over big features, costing her time down that feature and wattage accelerated out of it to maintain Pace with the sharp end of the stick.

There are a good number riders who are much better than Kate technically, they just don't have her engine.

Her hype is what brought me to following women's xc after ignoring it for years. What can I say I'm tired of seeing her face telling me how ready she is when she 7 minutes down on the winner.

Willikers (Sep 3, 2021 at 18:40)
@swellhunter: sounds like you are a trainer. Her main objectives were clearly the Olympics and worlds, just like everybody else.

I do get tired of Kate's supporters citing her broken arm as an excuse for training adjustments.

Neff broke her hand nearly at the same time, not to mention she nearly died from her crash that we moved her spleen. This is not hyperbole go look it up.

When Kate says she's on the comeback trail I asked from what?! You can certainly build your aerobic base, know what your FTP is while on the trainer.

What I know for a fact is she had a brain injury and whether that affects her judgment when the gnar shows up I don't know.

I merely responding to a social media spamming individual who doesn't produce nor is honest about where she's at and doesn't respond to any of her followers.

Her program is out of whack because her team doesn't have the elasticity or the toughness to tell her he wants to get on the podium she needs to do XYZ.

In the meantime I wish she would just lay low and stop showing up in the Washington Post telling all of us how courageous she is. And not once but multiple times in the same article.

Who is in courageous in life? She's not my role model - everything to her is work including social media.

I've seen many many world champions come and go; she's just another in a long line..

This is kind of an inside joke

Someone from her crew said she was flying before Tokyo and Kate said she was ready yet afterwards she couldn't figure out what her problem was.

She needs a new crew

That's such a sad thing to write

DBone95 (Sep 3, 2021 at 19:04)
@Willikers: No nerve struck, just calling out bullshit when I see it. Her descending abilities have not cost her this year, just like they didn't make her in her winning year(s). Her fitness is what has cost her and I don't pretend to have the answer why, nor does anyone posting here. As for "I'm tired of seeing her face telling me how ready she is when she 7 minutes down on the winner", I can't argue with that.

She was never a great descender nor did she appear to enjoy it. It didn't cost her because she has a big engine

Hence her quote, "my body and brain became disconnected"

I am a total Neff fanboy for obvious reasons but also for the fact that she actually has taken the time to read and like some of my comments.

One is a real human, one is just using people.

Willikers (Sep 3, 2021 at 19:19)
@DBone95: also if you think it's her fitness do you really think years of power files have no relevance to the current situation?

So much blah blah from a Stanford sports physiology grad.

If she is so learned why is she riding with her teammates cruising in the short track event?

She spent a month in Switzerland recently after which Frischi said she was a different rider..

At 25yo?! That's a WNBA attitude that no sportsman should ever follow

DBone95 (Sep 3, 2021 at 20:59)
@Willikers: I'm a fanboy of all of the women and will be rooting them on from the side of the track in Snowshoe in 2 weeks. We agree on several things with Kate, just not her lack of descending skills. I've had many of the top elite women riders actually reply to my comments on IG, but Kate has never been one of them... heck, she's never even liked one. I do think Kate has too much focus on strength training, but I'm also a nobody who knows just enough to be dangerous, so what do I know?

When people neg me without responding to any of my numerous points aren't they merely hiding behind feelings?

That's why the comments sections are so self-censored regarding Courtney - any speculation or possible reasons she is failing is met with the shower of negative votes from the Church of Kate.

I'm perfectly willing to have a debate as shown; it's just hilarious that people with strong feelings aren't willing to do the same.

But since you ask I rode everyday all summer 1.5 to 6 hours, with the occasional rest day. Former road cat 4, been riding dirt for 50+ years, bmx, mtb. Ride fully rigid on our Nor cal trails because suspension is boring.

What's your story, do you have an opinion on the current topic or are you just a troll?

Willikers (Sep 4, 2021 at 9:11)
@femto505: I voice dictated all comments while prepping dinner, then cleaning up then reading other things, no keyboard necessary

Thank you for your concern over my hardware, technology is great!

Willikers (Sep 4, 2021 at 14:49)
@femto505: wow what a great ride today!
Worked on walking the bike sideways, sessioned three steps up and down for 12 minutes, varying techniques and weight transfer, ;-)
Little tank slapper in the sand ;-)
The tide was high. Too early for wintering shorebirds.
Put the saddle on from my wife's old full sus - game changer!
I don't know the mileage, generally don't keep track. Fun!
Let me know if you want a ride report from tomorrow!

Strava is for people who need to prove certain things to themselves or to other random people on the internet. I really don't care if you think I did it or not. I got a new bike this summer with proper geometry and it is changed the way I ride. There is a lot of stuff I need to learn or relearn.

What on Earth do you think Strava would prove anyway, just a random route at a random speed like that's all there is to cycling.

Willikers (Sep 4, 2021 at 19:06)
@femto505: I had this conversation with a new friend who was competitive in Cross back in the day but all he wants to do now is bike pack and race the tour divide and the silk road

I said you know I use Strava for a couple of times and according to it I had done almost the exact same time and the exact same speed over a similar route on the map, yeah it doesn't show how many stairs I descended, how many cars I avoided, how many broken fountains I rode through, homeless encampments, crazy people dodged, etc.

I only use it now for hikes

You must be about 22. Strava or it didn't happen is such a childish thing

Well I was mucking about saw a large group of 20-something Bros dressed the same, had the same voice, regarding me with the same smile and same Ray-Bans..

Does your grandpa use Strava because that's where I'm at.

ReformedRoadie (Sep 3, 2021 at 13:31)
Which event is he doing? Amazing he would pass up the first event he could wear the rainbow stripes.

A bit stupid since I believe he hadn't even raced in road so far this year. But it's Trinity home tour, altough if I was in charge I'm not sure I would trade the chance to showcase my brand with the stripes for that race.

sideshowmel (Sep 3, 2021 at 22:33)
@FujiPT: Hasn't raced on the road since 2018!
www.procyclingstats.com/rider/christopher-blevins
Below threshold threads are hidden

Augustus-G (Sep 3, 2021 at 23:04)
We'll never know. Evie was on the track and Jenny wasn't. That being said I don't think you could slide a dime between them on their best days. Both are big gear power riders that remind me of Annika pedaling form wise. IMPO, if you had to choose between them on any given day, flip a coin.