Feb 26, 2014 at 8:46
by Fabio Schäfer
Tweet
It was great news for gravity bikers around the world when MTB Slopestyle became part of the X Games Munich in 2013 - the sport reached a new level on the global stage. Although the process of the event was not perfect, it was a success for mountain bike slopestyle due to the huge media coverage from around the globe.

After ESPN suddenly declared that there would be no more European X Games events, it was a shock for the mountain bike scene and Munich. But it seems like Munich wants to have its "own little X Games": Munich Mash (Mash = Munich Action Sports Heroes). 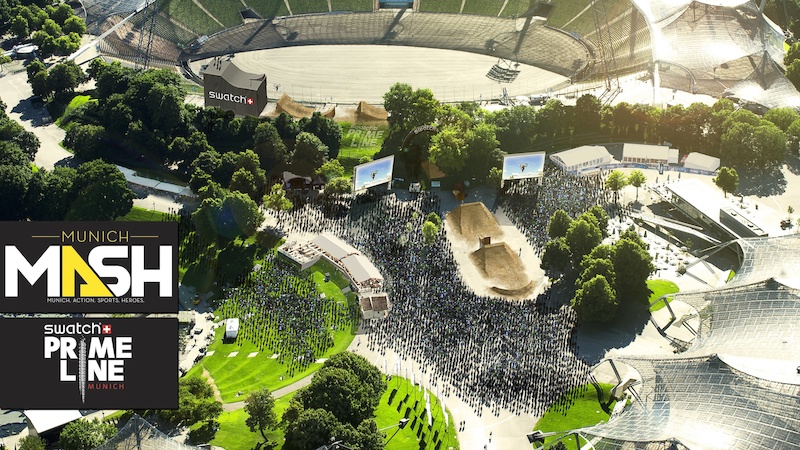 KUNTHER (Feb 26, 2014 at 13:54)
just be fortunate that your city is doing this for you. I cant think of any cities in the states that would do this for the people. Ever if it was funded by us the people most cities would end up denying the permit to host an event like this. congrats guys!!!!!!

marseer (Feb 26, 2014 at 15:40)
Just like how people have PIN numbers for their debit cards! It's their personal identification number number!

jespinal (Feb 27, 2014 at 5:48)
I don't like semenuks runs they are clean and tech yeah but boring as fuck, while other riders have me st the edge of my seat, let's say zink run at rampage, or lacondeguy's those were the sickest runs I have ever seen but still the commenters and everybody was only paying atention to semenuk, he's good yes but imo he doesn't make exciting runs

Nicklovesbikes (Feb 27, 2014 at 8:34)
o agree a little bit like at crankworx all he did was trucks and flip whips hes still 10x better than lacondeguy

Aarrce (Feb 27, 2014 at 8:42)
The reason it seems boring is since he does it with such ease. Sometimes doing something with ease, can seem boring to others.

jespinal (Feb 27, 2014 at 11:37)
@Nicklovesbikes I wouldn't call that so easy, lacondeguys run at rampage was so moto and pinned down that it deserved more points
@Aarrce I'll be honest it's not because of that cleanlander is waaay more stylish and lands cleaner, while all he does is oppo tricks that score more and if a regular 360 to oppt 360 in 2 different jumps count more than a frontie to double flip you tell me how downhill has this gone.

With that said I'll admit, he is a nice as f*ck rider, really clean and really tech, I just don't like it, and think some of his runs are overscored

atomlized (Feb 26, 2014 at 19:21)
true, but the Vienna Air King FMB comp only had 3-4 jumps in the whole course, still had a big turnout though!
I think this Munich Mash will be an awesome event too! wish I could watch only that I live on the otherside of the world

jespinal (Feb 27, 2014 at 5:46)
Xgames in europe weren't as big as expected and the crown massively sucked, here in the barcelona ones the events were incredibly sick but no conrribution from shops,between events you had literaly nothing to do as they were sooooo small it simply didn't work out

morphinemelisha (Feb 27, 2014 at 4:05)
Us Canadians have a different meaning of Grass being greener on the otherside...cough-cough-cough