Jun 17, 2009 at 6:52
by mike dyson
Tweet
Bike trials is often thought of as navigating your bike over objects such with out putting your feet down, but can be ridden on something as simple as a curb. The ever growing UK trial's scene has mainly departed from its traditional “comp” style riding as the majority has moved to “street” and “TGS” (tap gap sidehop) style riding.

Enjoy the videos and a few pics inside depicting the newer TGS style of trials,Bike trials is often over looked as a form of mountain biking as it is a very unique discipline due to its need for agility, skill and control. As one of the cheapest and most simple forms of biking it can be fun for every one as they can be ridden any were on anything. Bicycle trials developed from motorcycle trials as practice of comps then branched off into its own sport, being ridden on both 20"(mod) and 26"(stock) bikes. 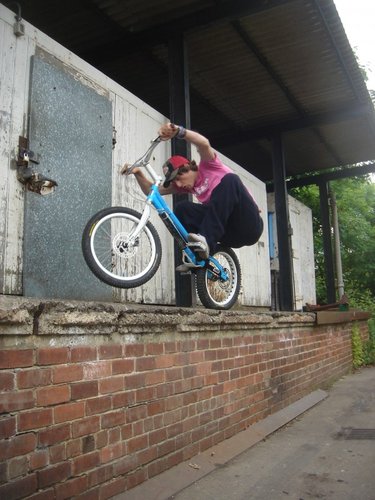 Now the majority of trials riders ride urban obstacles as this does not require them to travel to natural spots. Rather then trying to negotiate natural or man made obstacles without their feet touching the ground, TGS riders compete against each other to see who can perform the biggest tap, gap or side hop which can be done on something as simple as a wall or any flat topped object. 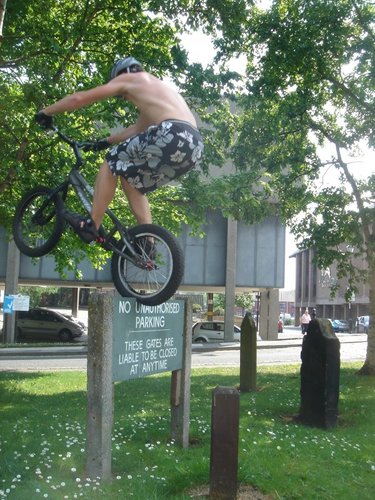 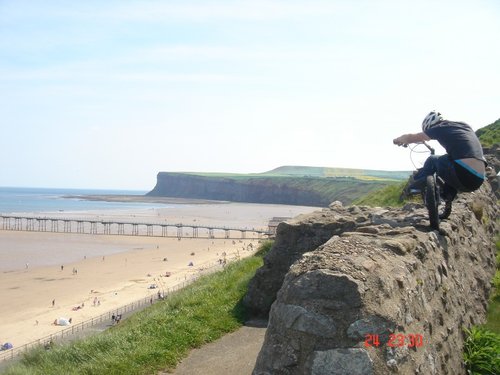 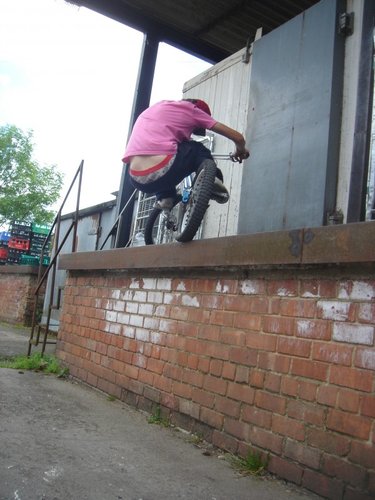 A TGS rider side hoping a large wall


by brent62
Views: 27,175    Faves: 359    Comments: 197
Another form of trials is street riding, this is very much like TGS riding and BMX street riding combined normally done on a 24” bike consisting of manuals, spins, fakies as well as taps, gaps and side hops to make up lines.

duncanp (Jun 23, 2009 at 0:22)
Agreed, however i'm not going to deny that i was dissapointed with his performance at fort bill during the WC he only made the majoirty of tricks after numerous attempts. Something that doesnt come accross in the vids.

Dembs (Jun 23, 2009 at 0:27)
Maybe because vids shows only parts when he did it.You don't know how long he has been trying to do everything shown on a video.

weejohn (Jun 23, 2009 at 3:21)
duncamp, the onyl reason you think that is because you had too high expectations of danny, its unfair to say his performance was dissapointing because think of the stuff he actually did. 3TAP off a 10ft ledge! backflip from a tiny kicker... i think some people had too high expectations! but i supose thats your opinion.

bunkey (Jun 23, 2009 at 3:32)
check this vid out: http://www.pinkbike.com/video/81085/ and you can see what i mean - it takes small steps to build up to something, its not like he could do that whole line first try - but it doesnt take away from his talent either.

dsazonic (Jun 23, 2009 at 2:51)
good videos, to be honest people have off days and sometimes they dont perform aswell as they could but to be fair hes a fantastic rider and i know i would never be able to ride like him so i have so much respect for this rider and best of all he looks like he enjoys our sport

coach-preston (Jun 24, 2009 at 12:35)
Are you frickin' Kidding me? Regardless, he gets it done! Side hop tailwhip!? Sick. What would have been cool is if he'd also done a 180 and landed the other way. I've seen and have knowna lot of street-trials and trials riders... he's got it made! Well done.

nouser (Jun 23, 2009 at 3:13)
trial bikes ir very good, ivé seen the tinh trhat they do... they to things that look like impossible on a no suspension bike.imcrerible

TerminusAvid (Jun 23, 2009 at 16:27)
I thought the Macaskill vid was sick, granted I'm not an expert when it comes to trials but my jaw hit the floor more than once! Very impressive skills, huge balls, and lots of practice!

shimano-cz (Jun 23, 2009 at 21:05)
unfortunatelly, this is a little bit too much for me to understand... Is mankind ready for guys like this? Should not we keep him behind the bars for some time yet..?

griffrhys (Jun 23, 2009 at 5:00)
finally something to do with trials on this site!!! suprised Scott Wilson isnt mentioned since he is one of TSG's top riders!!!

SlaytheGspot (Jun 24, 2009 at 8:01)
ha dude trials is sick, especially when they pout it in the woods. theres a vid on youtube with like a downhill trials trail. pretty steezy

ruairidh (Oct 3, 2009 at 14:36)
some trials riders look so gay with the trackies/shorts and ttrials shoes but danny mcaskill is kl

Yeah, there's lots of skill in a huge sidehop, I can respect that, but there's just not enough in it me to be interested. It's like how a lot of the snowboarders in the last couple years have been doing straight drops off of roofs and sh!t.