Your Essential Guide to EWS Whistler 2017

Aug 8, 2017 at 18:27
by Fraktiv
Tweet
Far over the misty mountains cold
To dungeons deep and caverns old
We must away ere break of day
To seek the pale enchanted gold.
- J. R. R. Tolkien

For the penultimate round of the 2017 Enduro World Series we head to Whistler, Canada, the self-declared mecca of mountain biking.

Synonymous with crisp singletrack through picture-perfect pine forests and open alpine, as well as those alluring bike park trails, Whistler has been a fixture on the EWS calendar since 2013. Held alongside the biggest mountain biking festival on the planet, the prize purse is much bigger here, and so too is the size of the crowds.

There'll be five stages of racing this weekend, all held on a single day. Riders will be competing over 49km (or 57km including lifts), with 1,464m of climbing and 3,197m of descending to add to the mix.

However, the mountains around Whistler are currently enveloped in what could be mistaken as heavy haze, but on closer inspection—especially by smell—that mist is actually smoke. There are currently a number of wildfires burning in the British Columbia region, in fact, it's the worst wildfire season British Columbia has suffered since 1958. At the time of writing, there are no fires burning in the vicinity of Whistler; the winds are blowing vast clouds of smoke over the town and its surrounding area, leading to public health officials providing real-time air quality updates, as well as special advisory statements for those wanting to work and play outside.

Enduro World Series race organizers have said that they're monitoring the situation carefully and will be updating competitors regularly as to whether there are going to be any adaptations to the course. 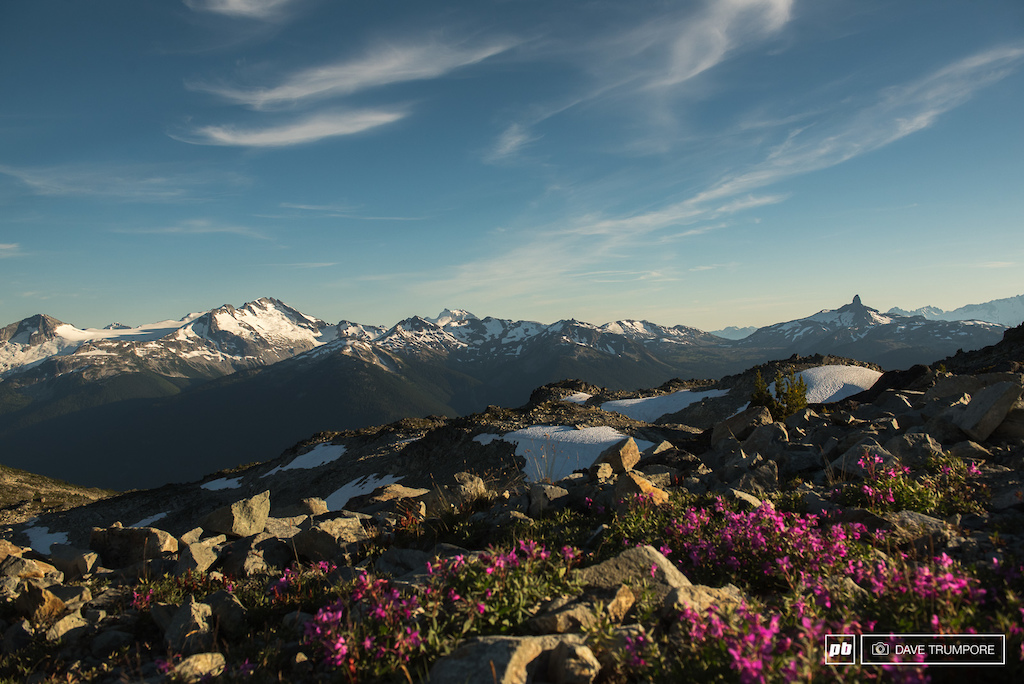 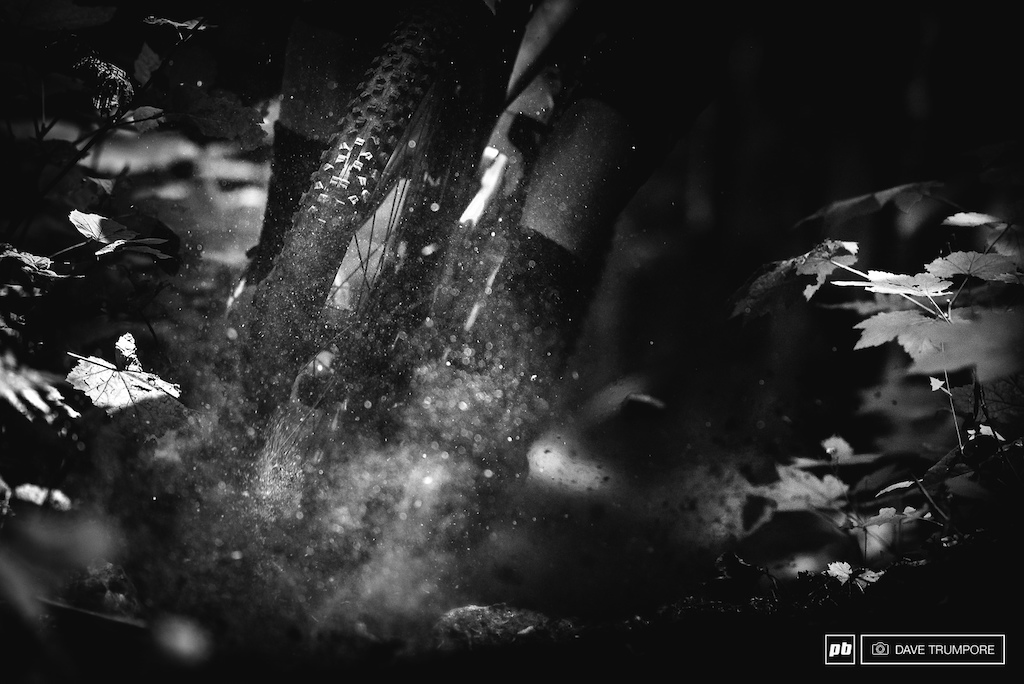 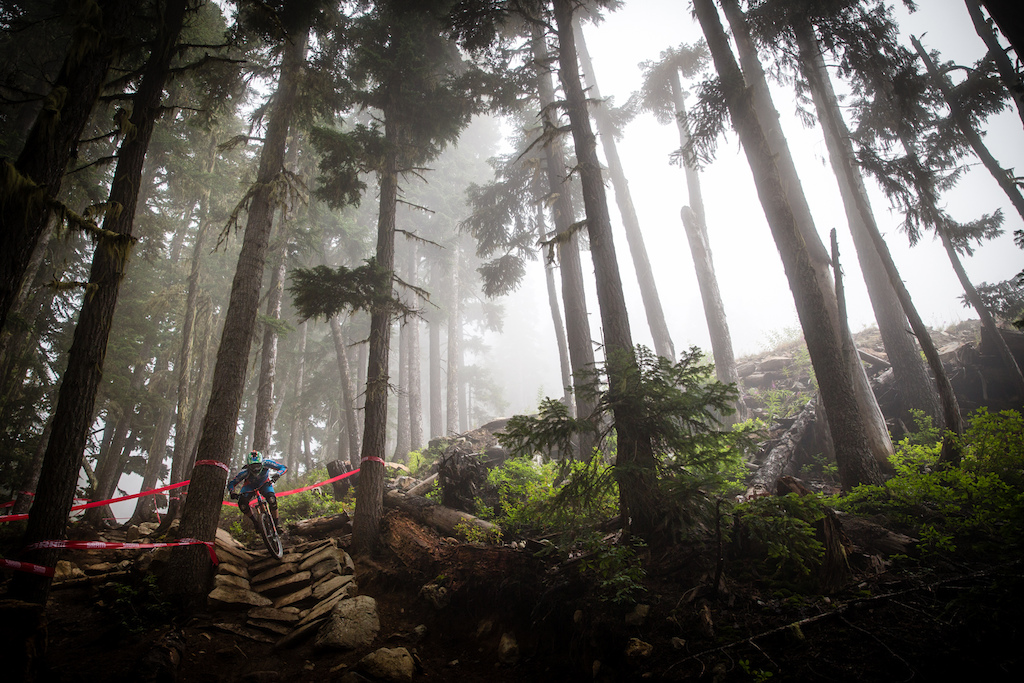 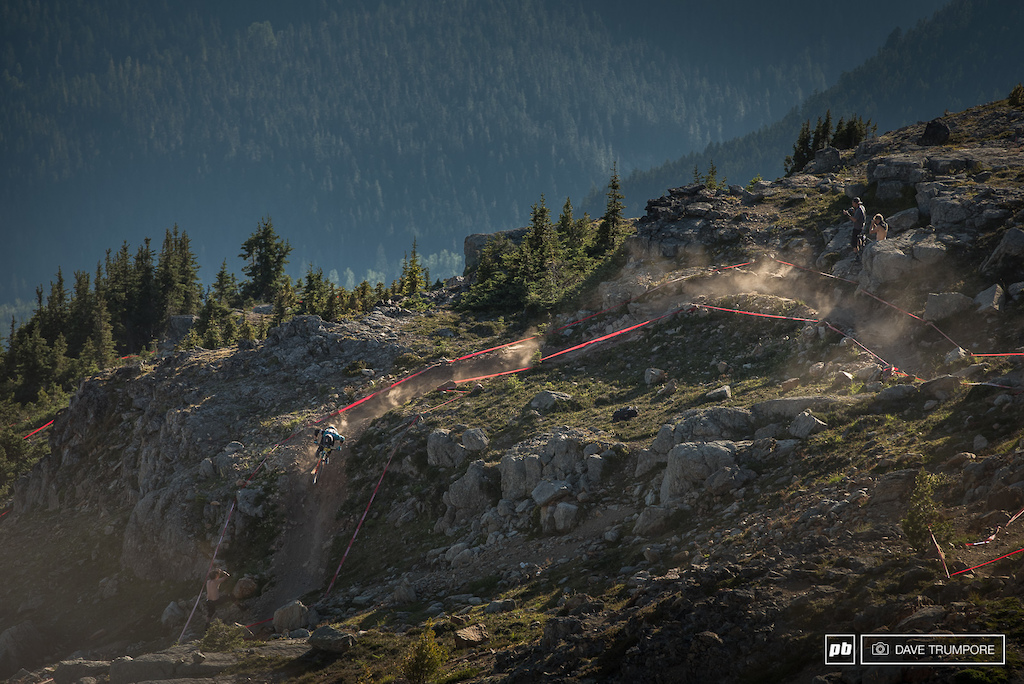 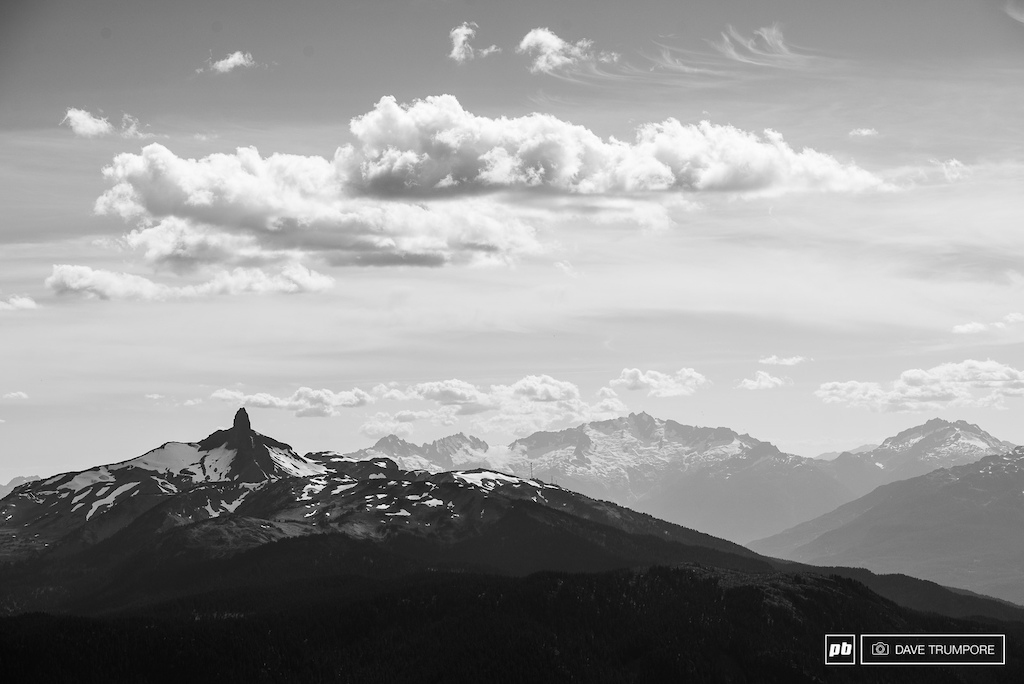 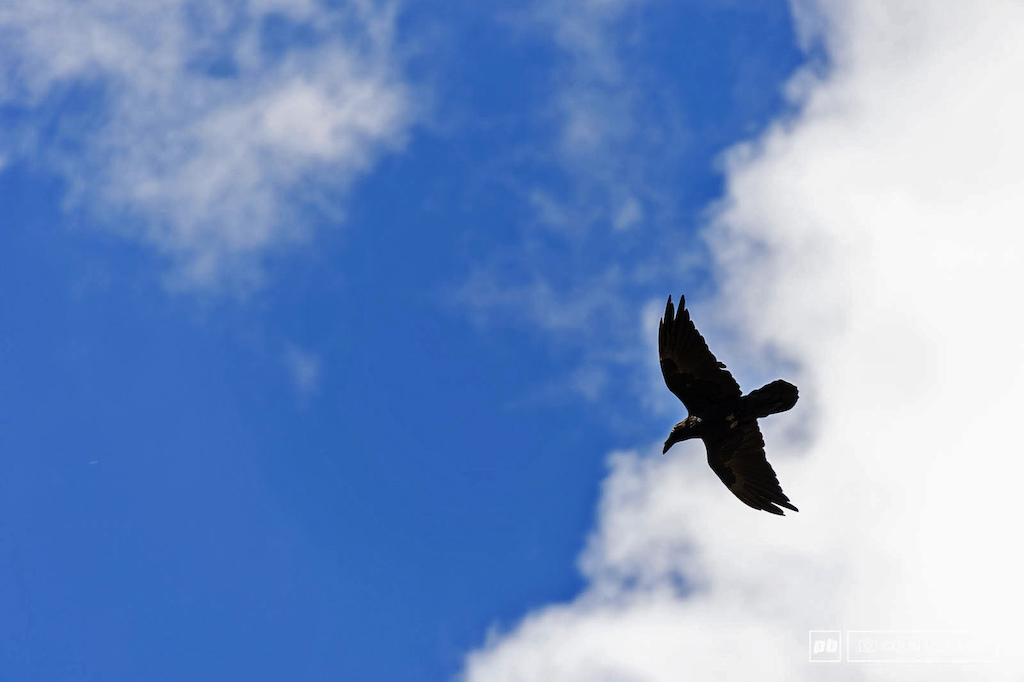 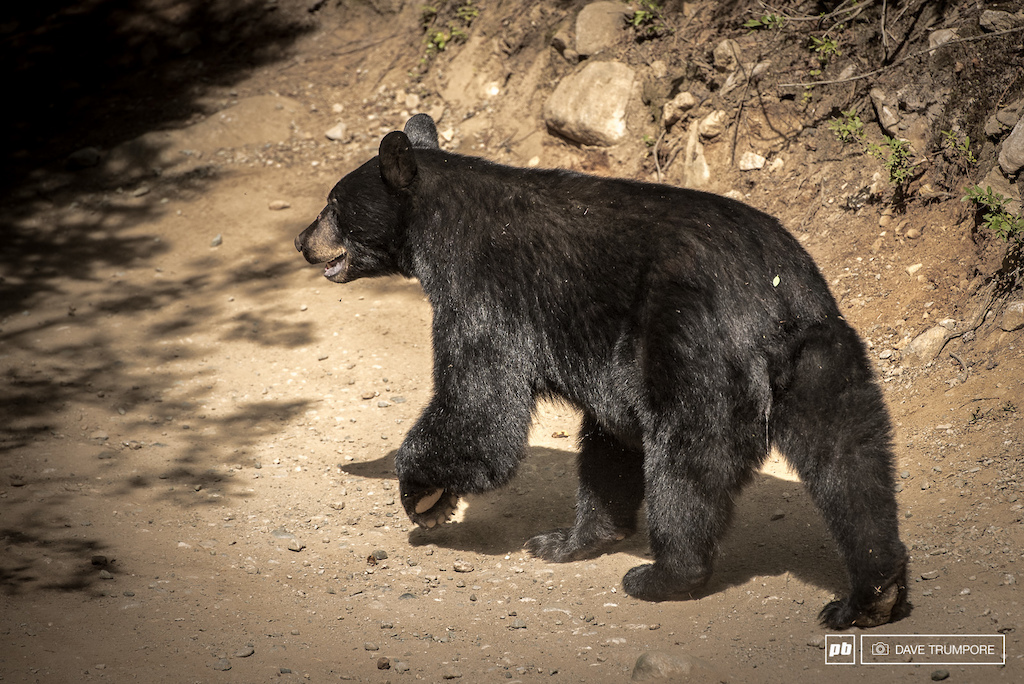 Beyond the bike park, there's a wealth of summer and winter activities to be ticked off when you're staying in Whistler and its surrounding area, but what about the history of the town itself?

Dig a little deeper and you'll find a rich culture of two proud First Nation communities; the Sk̲wx̲wú7mesh (Squamish) and L̓il̓wat7úl (Lil'wat). Having resided in the area for thousands of years, the history of both First Nations are tied to the rivers that run through it, the mountains that overlook it, and the lakes that rest within it. With a shared history of the land - via oral stories from generation to generation rather than written—the two First Nations began visiting the area now known as Whistler in the summer months to harvest the flora and fauna for food and medicines.

In the 19th Century, European traders, trappers, and prospectors made their way into the mountains, dividing the lands between themselves, and rounding up the indigenous population into reserves. The British Navy surveyed the area in the latter part of the century, naming the highest peak London Mountain on account of the fog that hung around it. The mountain would later be renamed Whistler Mountain, and in 1914 Myrtle and Alex Philip established the first commercial fishing and weekend retreat cabin on the shores of Alta Lake. From there, tourism began to thrive, with the area being touted as a picturesque getaway thanks to its easy access via the Pacific Great Eastern railway line.

One hundred years later, Whistler has grown into the booming tourist playground that we all know and love, playing host to events as part of the Vancouver Winter Olympics, and with the two First Nations having signed a historic agreement in 2001, we're seeing the area really flourish into somewhere that has more to offer than just bike park laps. 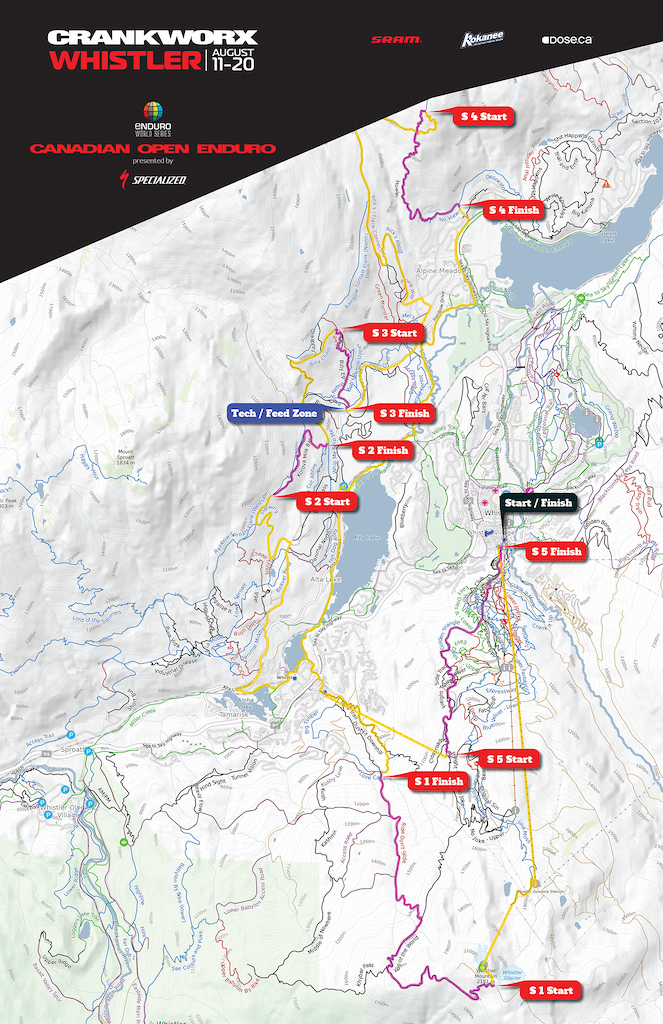 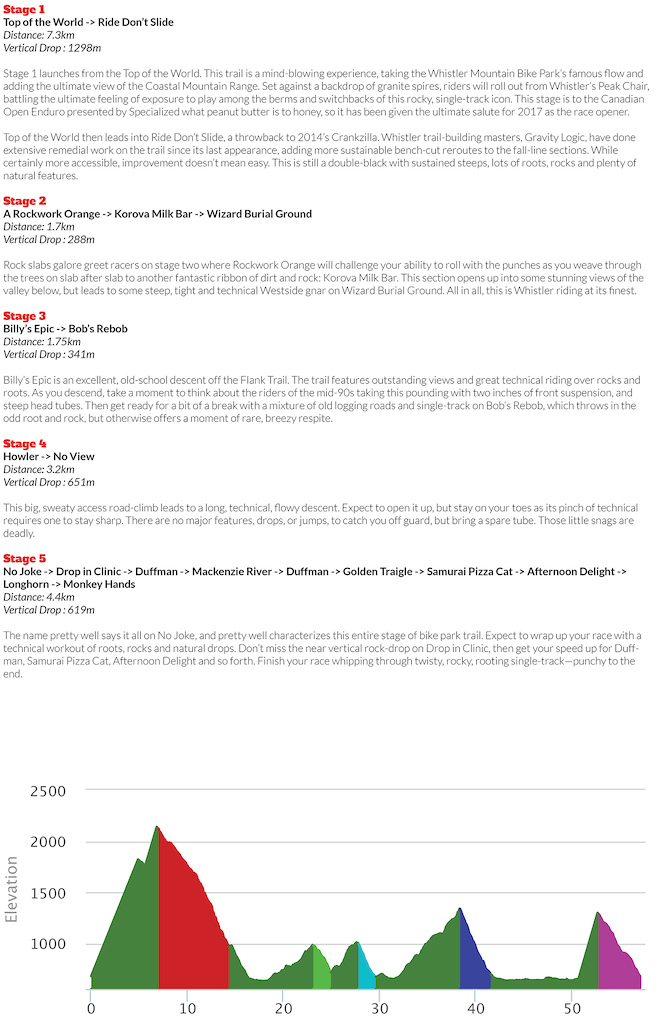 
What happened at the last round?
The high altitude of Aspen-Snowmass played host to a closely fought race in the Pro Men's field. With 70km already behind him, Richie Rude entered the final race day with a strong lead but a mechanical on Stage 4 gave his competitors the opportunity to seize the advantage, and sure enough, they did. Sam Hill became the man to beat, and not even Jared Graves could get close, although he gave it a good shot. Despite it being the first time he had raced at Aspen-Snowmass in the EWS format, Hill was able to pull away, claiming the last two stages. Graves would fall foul to a last minute rush on the final stage by Martin Maes, leaving the Australian in third place, behind the Belgian.

Hill has his eyes on the championship even more so now, and with a 40 point advantage, he's got a tough fight ahead to keep the lead with two more rounds to go. Adrien Dailly is currently his closest contender in second place and Greg Callaghan in third.

In the Pro Women's field, Cécile Ravanel maintained her lead throughout the weekend, bar relinquishing the Stage 1 win to fellow countrywoman Isabeau Courdurier. Ravanel would win Aspen-Snowmass with 47 seconds to spare, leaving her rivals to fight it out for the remaining podium steps. Between Winton, Anita Gehrig, Courdurier, and Brown, it would be Courdurier who would fair best, taking second spot, whilst Canadian Casey Brown came away with third.

Adding more points to the overall, Ravanel cemented her lead, with Katy Winton moving up to second spot and Ines Thoma into third. 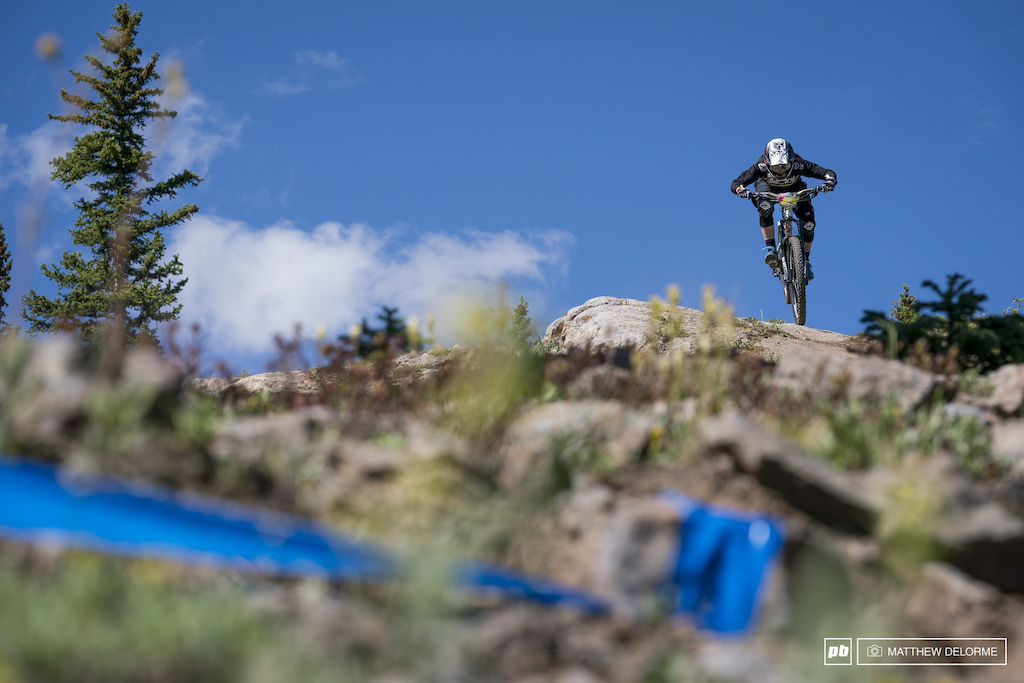 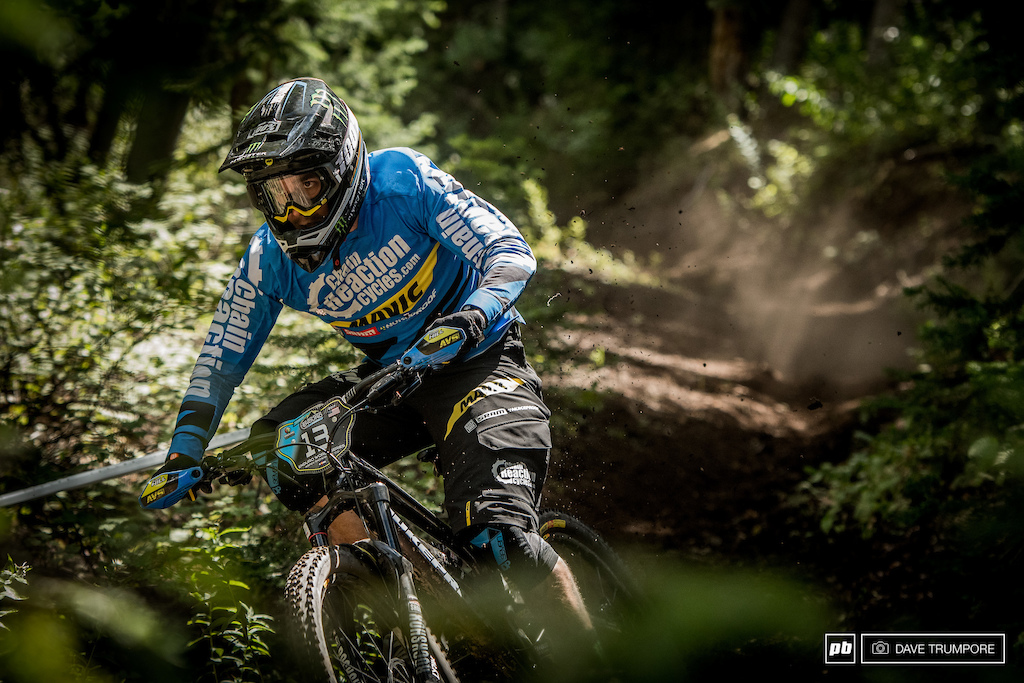 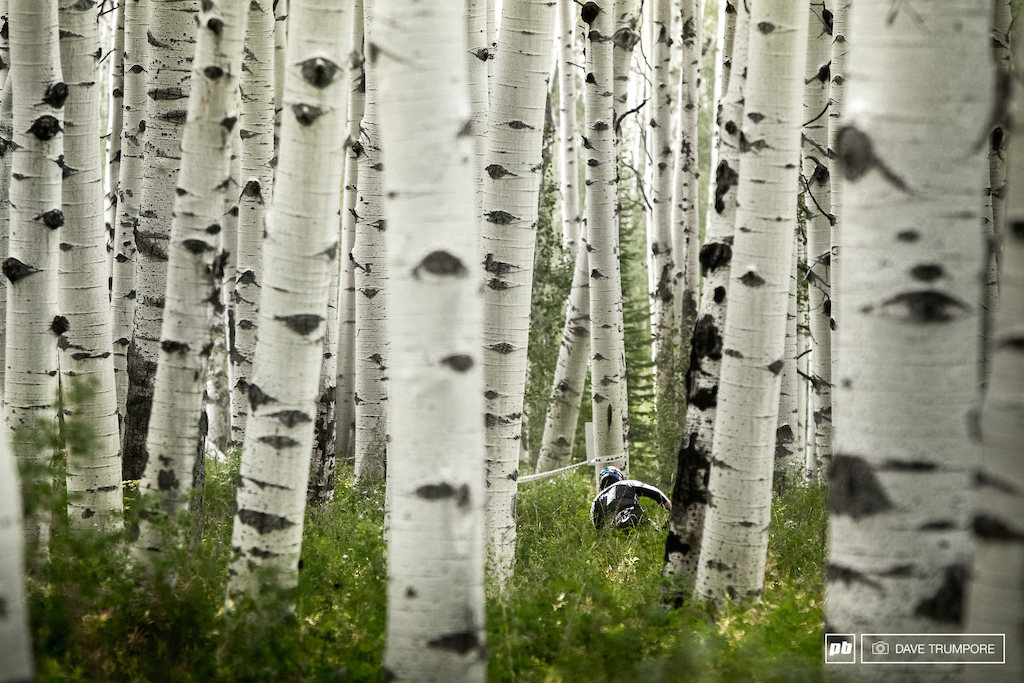 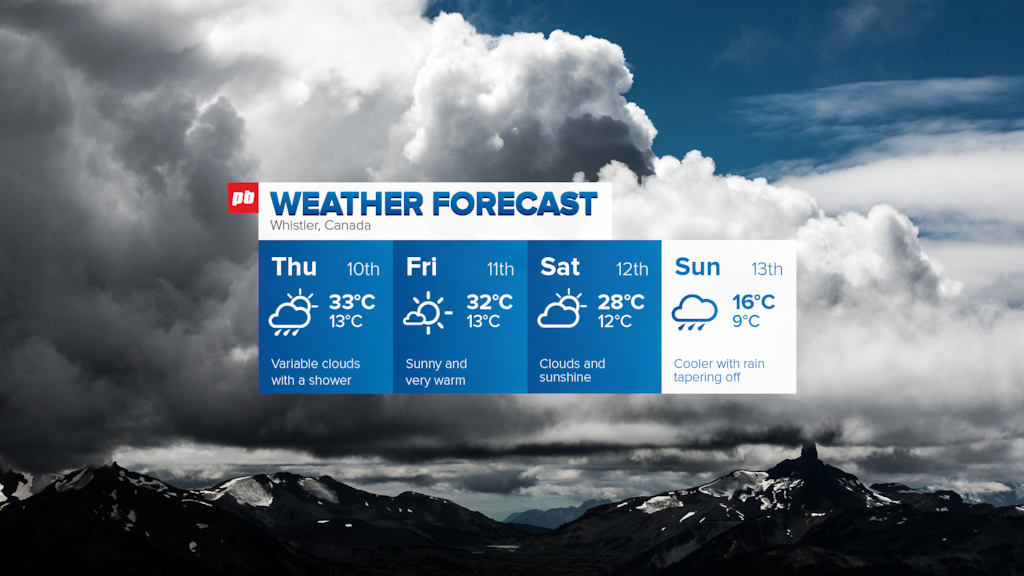 *Weather forecast as of 07 August.


What happened last year at EWS Whistler?
Last time out in Whistler for the EWS, we saw series leaders Richie Rude and Cécile Ravanel suffer mechanicals but despite this, they fought on right to the very end, and it was worth it.

Fine tuning his competitiveness year-on-year, it was Whistler local Jesse Melamed who took the early advantage with a Stage 2 win. Melamed was on course to take his maiden EWS win on home soil, however, it was undone by Rude, who stormed the last three stages after suffering a puncture on Stage 2. Josh Carlson wrapped up third spot in the Pro Men's category.

In the Pro Women, we saw Isabeau Courdurier taking her first double stage wins, but like Rude, Ravanel simply upped the pace, taking the remaining stages, and the overall win. Casey Brown took the third step of the podium. 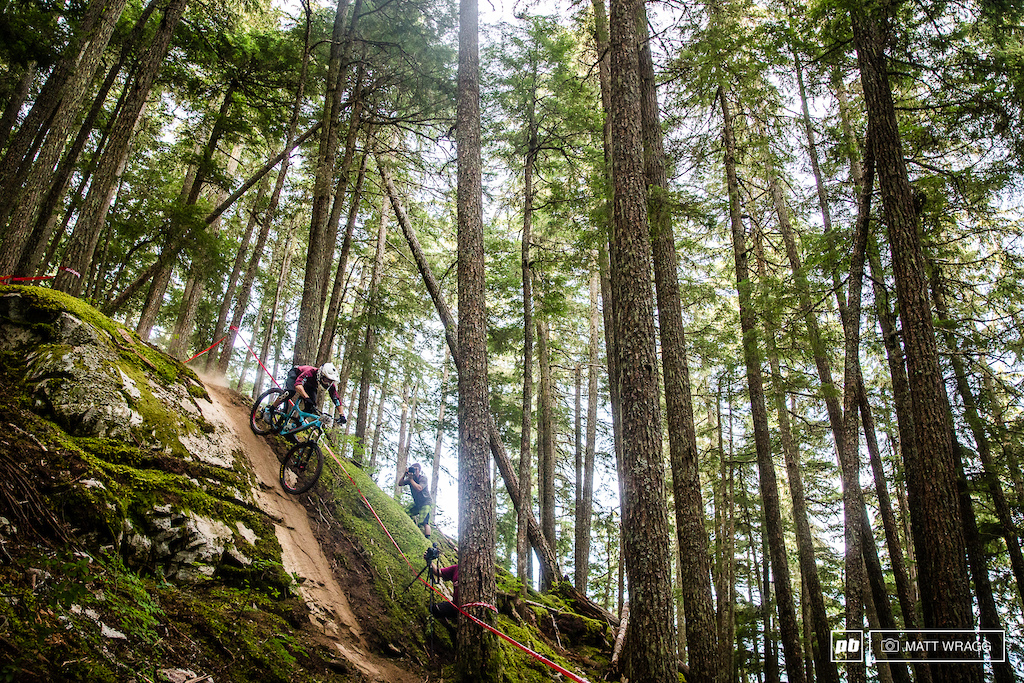 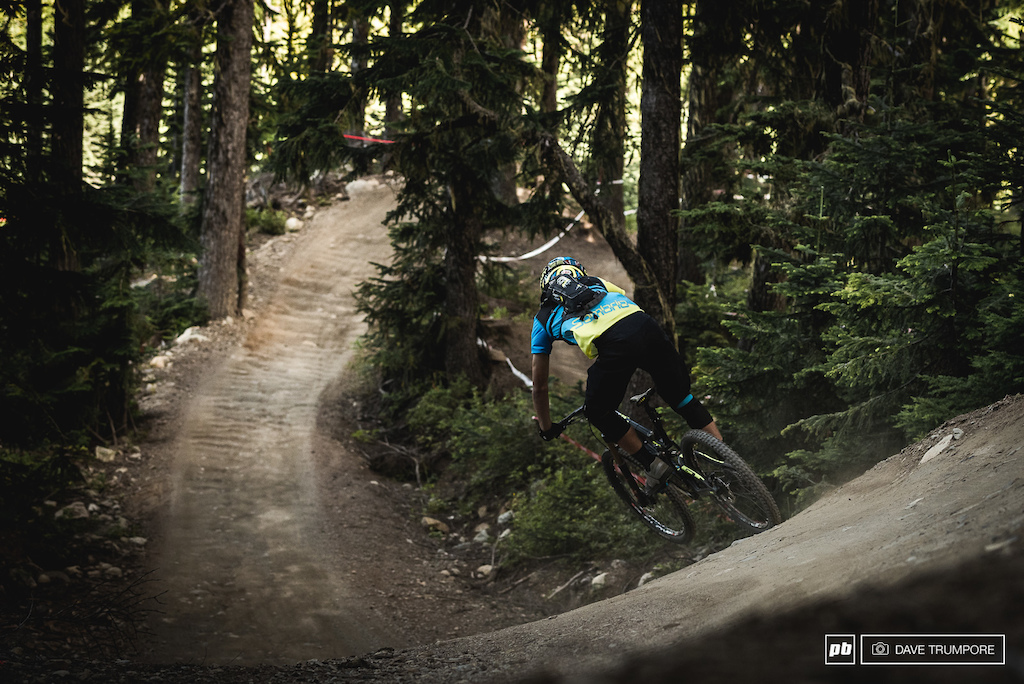 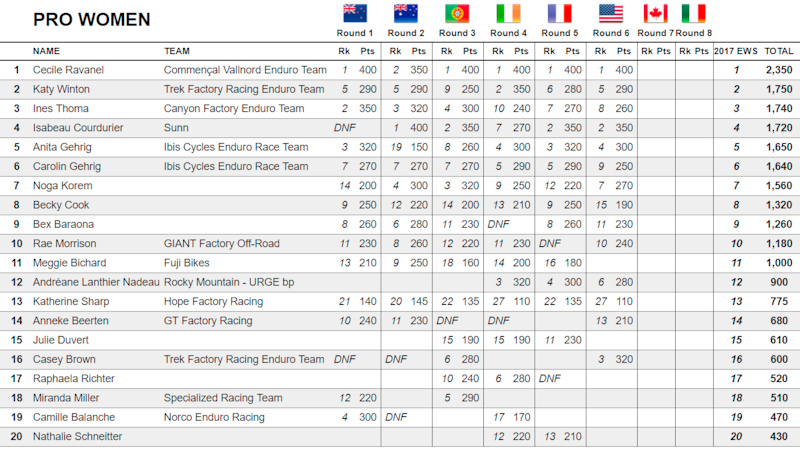 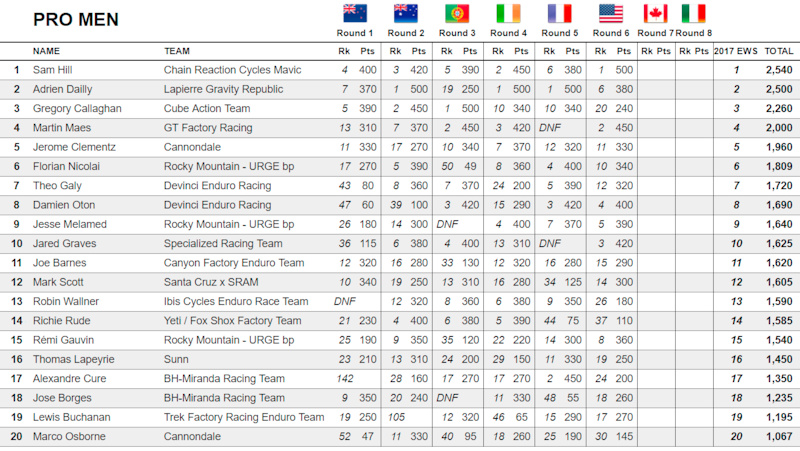 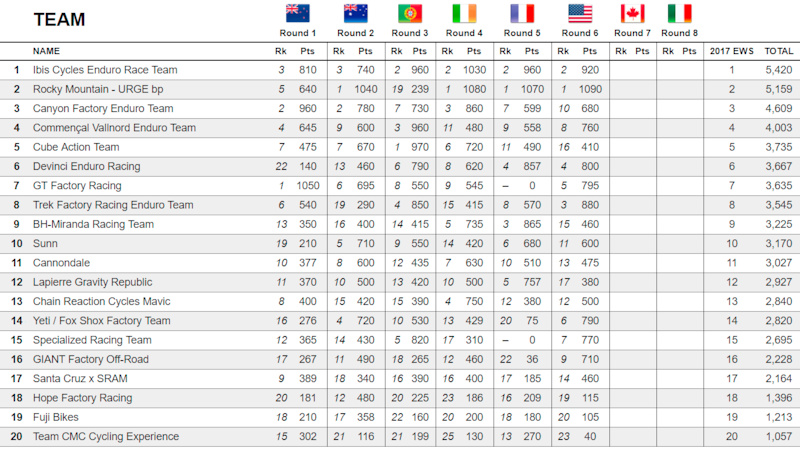 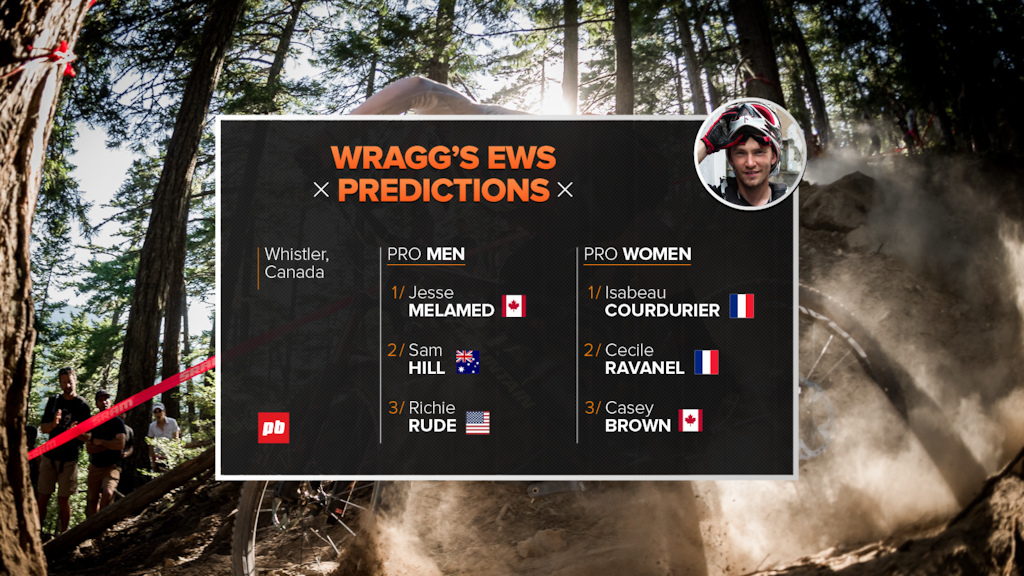 The schedule
Pinkbike will be providing you with the best daily coverage from our team of photographers and videographers in Whistler this week. There'll be fresh content arriving on the Pinkbike homepage from practice on Friday and Saturday, and race day news and recaps on Sunday August 13, with the final rider crossing the line around 19:00 PST. Get your screens ready because you can catch the riders' times as they progress through the stages on both days via the EWS live timing feature, as well as catching the live broadcast feed on the Pinkbike homepage from 17:30 local time. 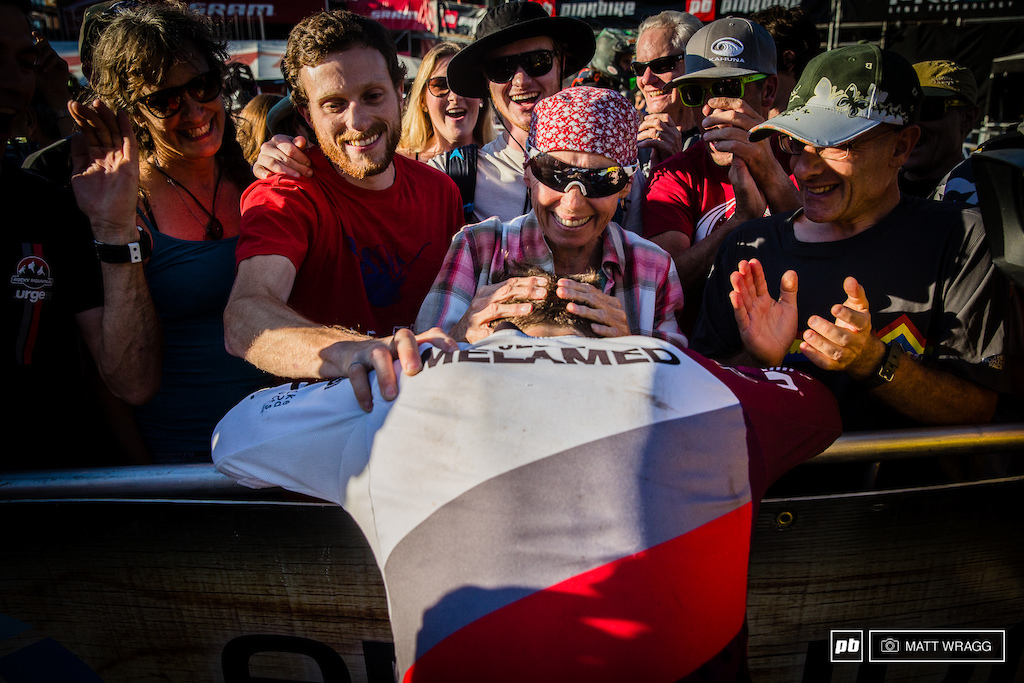 DMal (Aug 9, 2017 at 9:19)
EWS bike check/gear coverage has been lacking compared to previous years. Given that the race bikes are similar to those many people ride, this is of interest to people. Please give us more.

rrolly (Aug 9, 2017 at 7:41)
"self declared mecca of mountain biking"??? I've never once heard a local call Whistler that. I've heard LOTS of visitors call it things like that though!

I'll be making my "pilgrimages" this Thursday and next week.

WAKIdesigns (Aug 9, 2017 at 8:42)
If Jesse doesn't win then I wil stop believing in the spirit of Enduro, that is home field advantage and locals giving you tips on the lines. Nah, maybe Greg and Peaty will show and race blind, singing "isn't she lovely"

I guess Whistler is about half as bad as that?

dfinn (Aug 9, 2017 at 10:33)
It's pretty bad. I've heard it's magnitudes worse than bejing. I've still been getting out for pedal rides but have been feeling pretty crappy and congested in the morning.

WAKIdesigns (Aug 9, 2017 at 22:49)
out of pure curiosity, a question from the under side of flat Earth - what makes air in Whistler so bad? Forest fires?

beerhunter (Aug 10, 2017 at 0:44)
My money is on Richie R for this one. He will be sorely pissed after the last race, has all the speed he needs, the tracks suit him a treat and he has nothing at all to lose by just going for it. For similar reasons Jared Graves for 2nd, who has won here in the past and, is brutally fit and, how could you ride a Pink Bike and come nowhere?

Thereafter the race is really interesting. Sam Hill has quietly and very tactically gathered points all season without ever seeming to fall off, flat, break his bike or generally over reach. This is a big chance for him to put a buffer into Dailly before they return to Europe and French friendly conditions at the Finale. He will need to, because there he risks flood of fast Frenchies getting between Dailly and him, wiping out any points advantage he might have. Dailly will know this, and will need to make a choice as to how hard he goes on a course that previously did not play to his strengths.

Whatever the case it will be on for young and old. That first stage is just a brute and will take a heavy toll both during the stage and later in the day. Cant wait ...

jamesbrant (Aug 9, 2017 at 8:24)
yeah i was wondering. what do the out of park trails look like after an event like this? like 3 years of local trail use i imagine.

gramboh (Aug 9, 2017 at 9:24)
I believe EWS donates money to WORCA which is used as part of the trail maintenance program... since yeah, they are gonna take a beating and it's already super dry and dusty out there right now.

paulskibum (Aug 9, 2017 at 13:09)
@gramboh: Crankworx donates $5k to WORCA to help repair and prepare the trails for the EWS. Its great support for the grassroots community but the EWS does rip the trails to pieces in a long run up of practice and race day. Rain on race day is forecast so who knows what that will do to trails that havent seen rain in a month!

AaGro (Aug 9, 2017 at 23:02)
Feck! Stage one is a relentless beast. The bike sounded like it had been beat to shit by the end of it...is anybody going to ride an air shock down this course? I can't think of one that wouldn't be overheated and stiff as hell by the end.

What a way to start a race!

WAKIdesigns (Aug 9, 2017 at 4:41)
I'm sorry to piss on Spec hate party, but I just rode the old Enduro 29 in quite basic setup and it was the best bike I have ever ridden in terms of geo and feel. My Antidote with Double Barell beats it in suspension department but fun and confidence wise Enduro just killed it for me. I was manualing, popping, hopping as much as I wanted. I got excited enough to do some whips and sht. Now I need to get Antidote guys to make me a long travel 29er... fkng amazing

WAKIdesigns (Aug 9, 2017 at 8:32) (Below Threshold)
@WasatchEnduro: quite frankly once you have Öhlins coil shock on board, double ply tyres, DH tube heavy "interior" of the tyres, I do not see how can Enduro be lesser to Stumpy on an Enduro competition of any sorts. At least for humans. Jared isn't one so he may have his particular reasons why to use a smaller bike for most of the time. I personally wouldn't, but that's worth sht.

WAKIdesigns (Aug 9, 2017 at 22:48)
@MTB-Colada: yeah sure, the proletariat of pro racers opressed by the greedy party

BigMountain (Aug 10, 2017 at 10:05)
EWS stop ruining Whistler's local trails. Some of us live here and ride them all the time. Or if you're going to include them in your race each year at least invest more money annually to re-build them after they get sh*#t kicked. Especially a local favorite like Rock Work Orange.

flaflow (Aug 9, 2017 at 13:22)
Hey you guys, Canadians aren't know for whining.
Below threshold threads are hidden