Oct 30, 2017 at 5:09
by Alex Boyce
Tweet
At the end of the day's competition, series champions Vittorio Gambirasio and Giovanna Bonazzi were crowned after four rounds of racing. With about a hundred riders taking part it was pretty hard to not say that e-bikes have had an effect on the riding public. The race looked like a normal Enduro race, it seemed as normal as any other Enduro race, the only difference being the technical differences of the bikes. 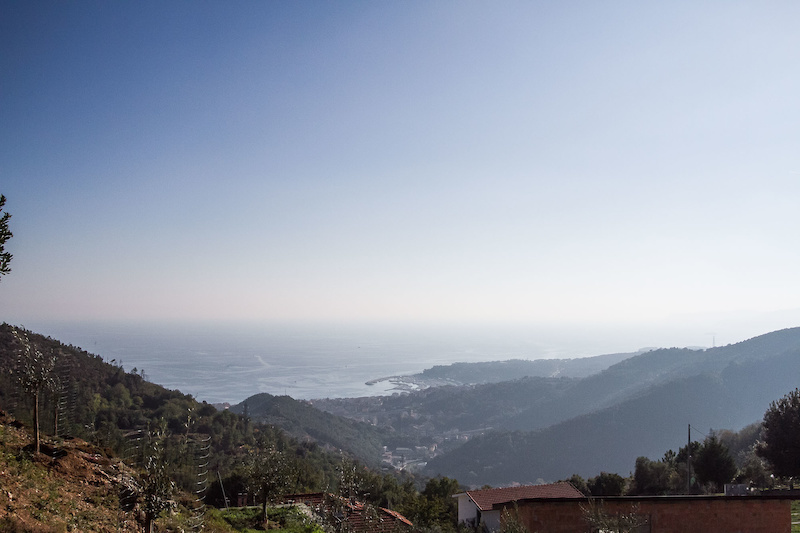 Up from above, the race start/finish Varazze sits 1300 m below the hilltops. 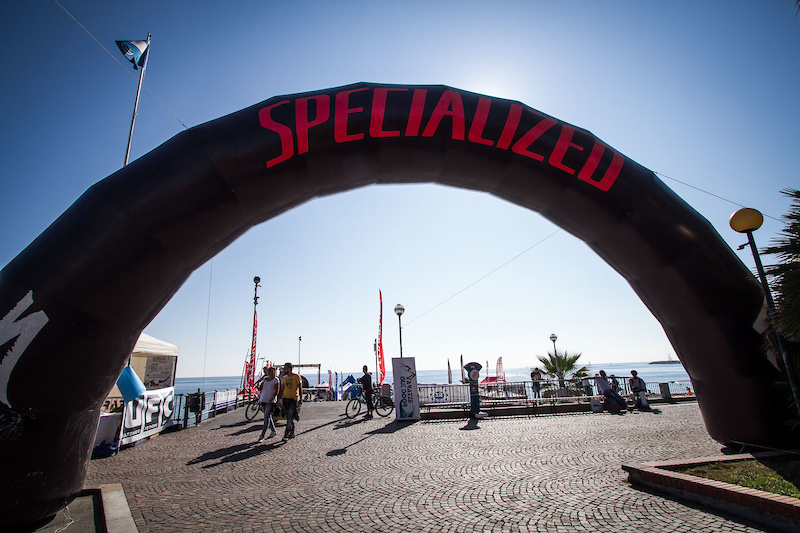 Specialized leads off the bike brand pack with their support of the E-Enduro Series.

The event sponsor Specialized has by most standards done what the riding public want, when something new comes along have a brand that supports it and helps it to grow. On the outside it might look like to the suspicious types brands that have invested in e-bikes are now trying to grow a sector that gives them a reason to make new bikes to sell to the unsuspecting public. However from the information around in the bike world in Europe this year, eMTB revenue has been for all brands the major income and source of growth, in some cases more than fifty percent of their company revenue for 2017 has come from e-bike sales. So by sponsoring a series it seems that Specialized are now actually supporting the need rather than creating it. 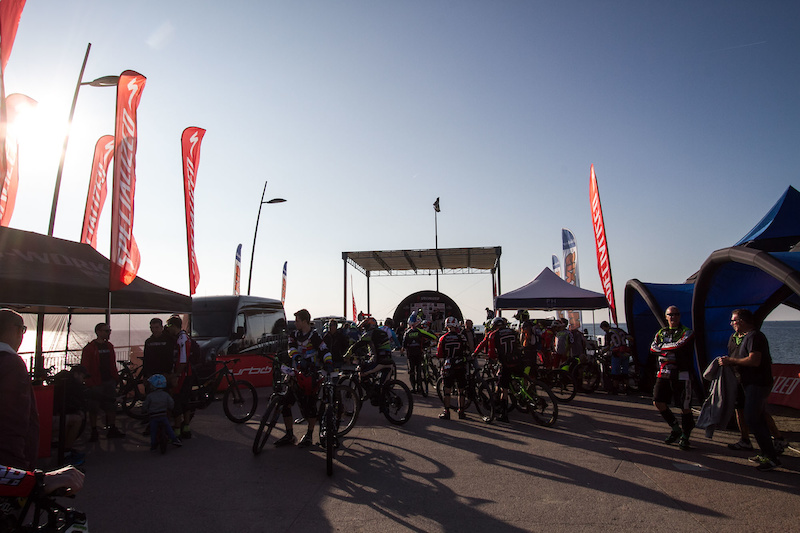 Pre-race the event paddock looked like any normal race, riders nervous and all doing their pre-race routine, before the official start. 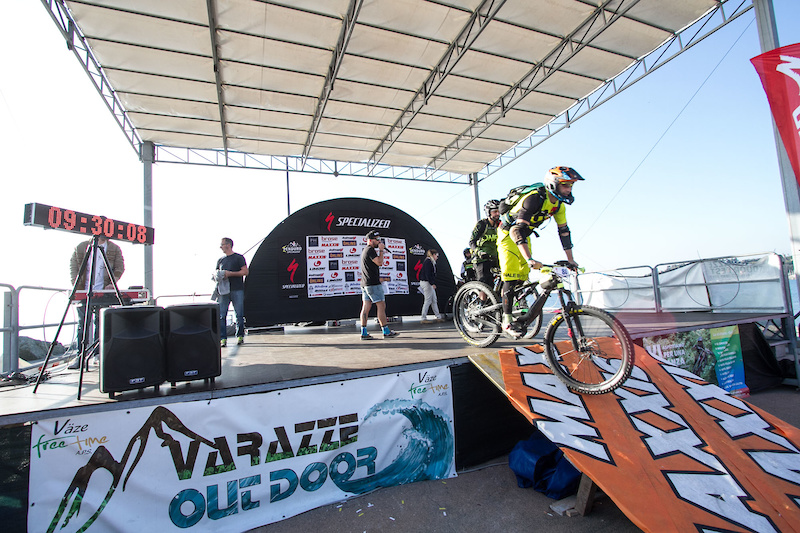 The racing starts the same as any Enduro race with riders leaving the start area at pre-determined times. 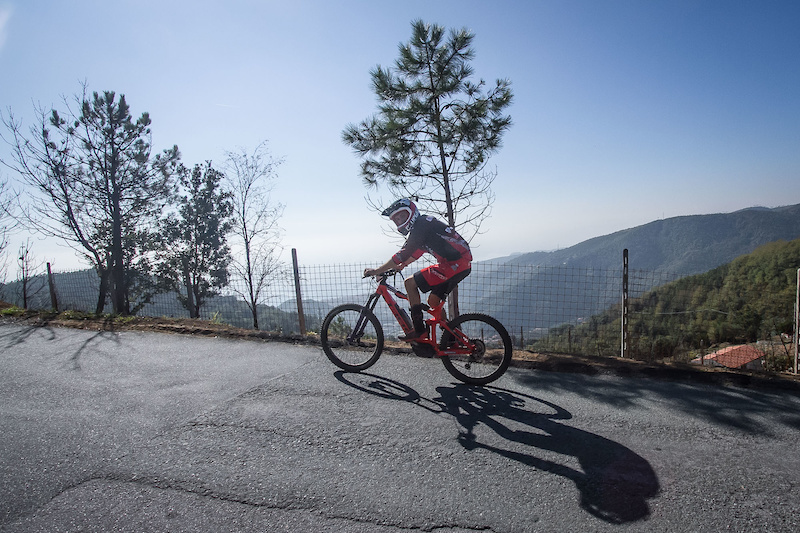 Riders make their way up to the top of the stages in the same way as with an Enduro race, there is a time limit and it must be done without outside assistance.

The race stages were based on the same stages used in previous non E-Enduro races, however, certain sections and trails had been added especially for the e-nature of the event. Stage two, for example, started uphill and stage three had a number of long climb sections. Riders in some cases struggled to get between stages if they did not maintain a reasonable pace despite the assisted bike. 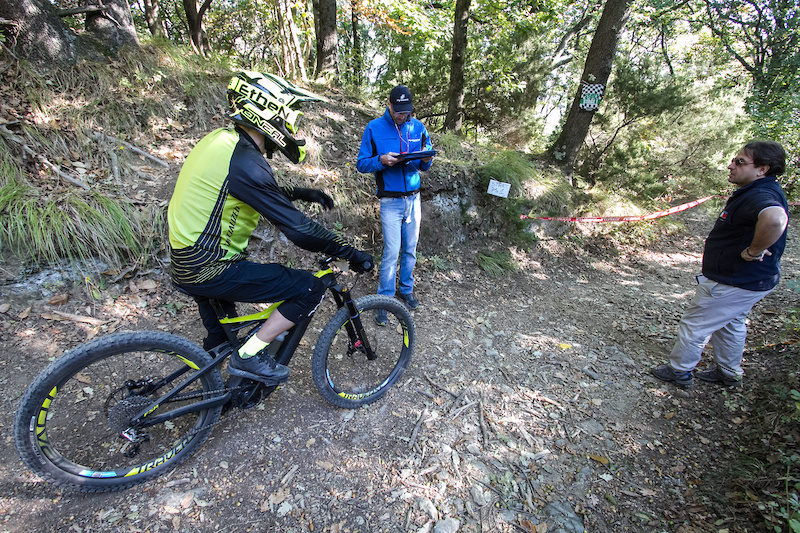 Stage 1 started on the clock, be late and your time will suffer. 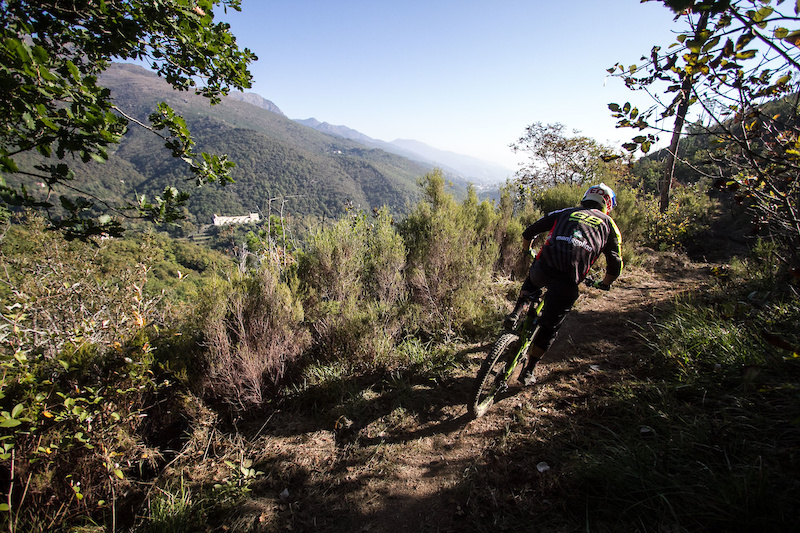 Stage 1 started at the top of the hills behind Varazze and dropped riders down half way before they climbed back up for stage two. 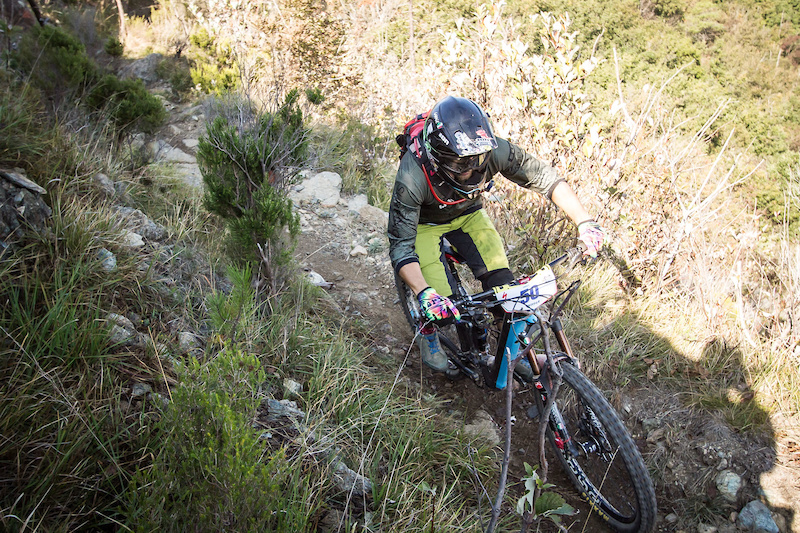 The trails were technical in sections and required all the normal mtb skills that we possess. 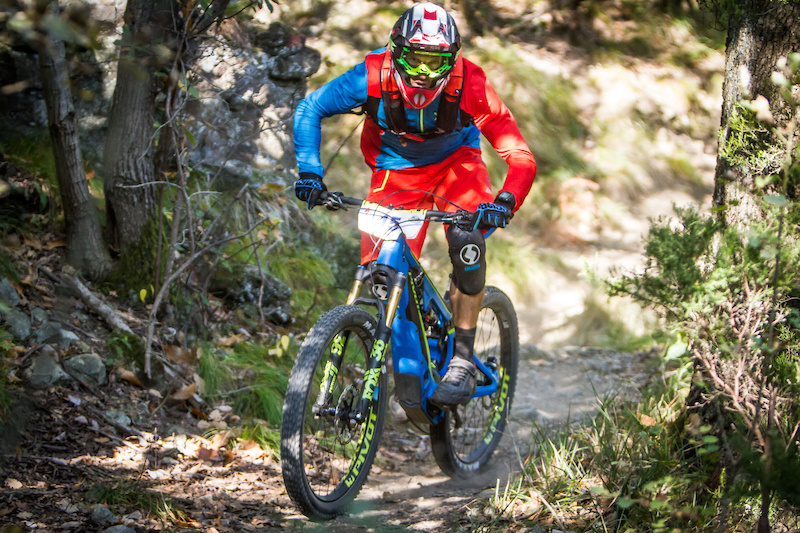 Andrea Bruno, a previous Super Enduro Italian champion was present riding a Pivot Shuttle, watching him ride showed absolutely that it was a bicycle race. 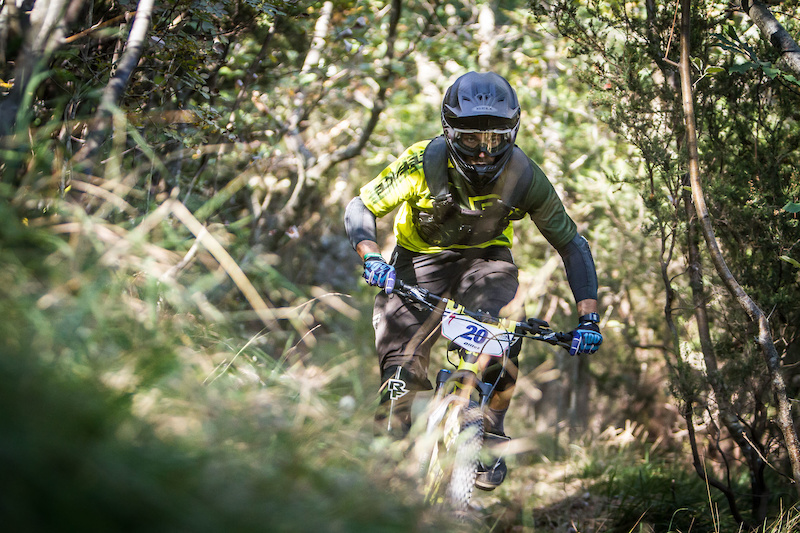 In certain sections of the track, if you wanted to go fast and have a chance of winning the stage, riders were forced to and clearly riding faster than the 25km/h (15mph) pedal assist speed. 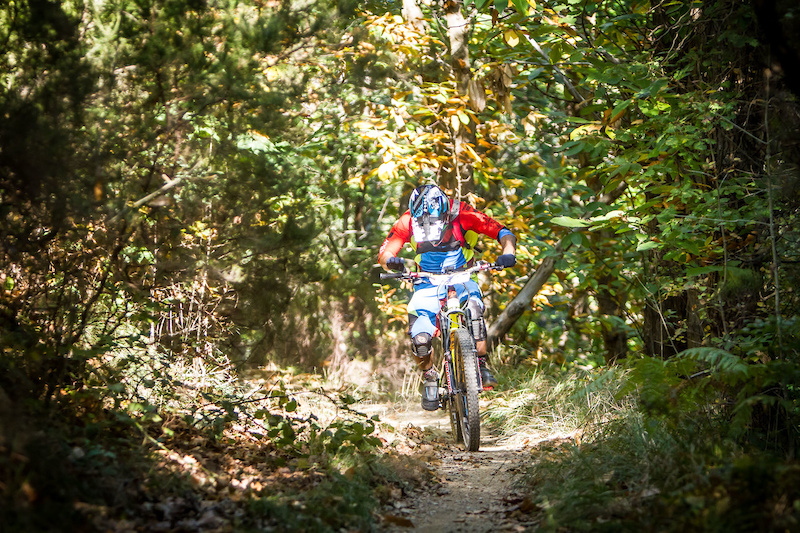 This guy had forgotten to turn his bike on as the stage started, he was seen fumbling for the power switch as he passed by. 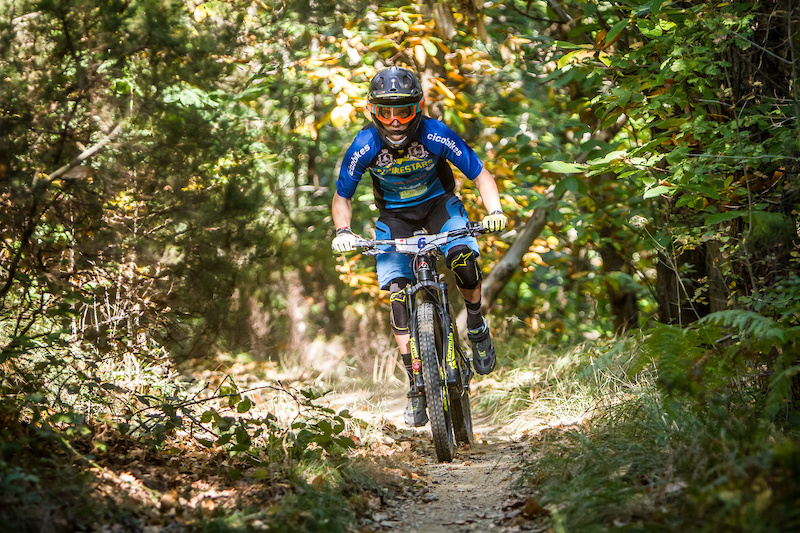 The eventual race winner Simone Martinelli showed a relaxed attitude as he pedalled his Rocky Mountain Power play to victory. 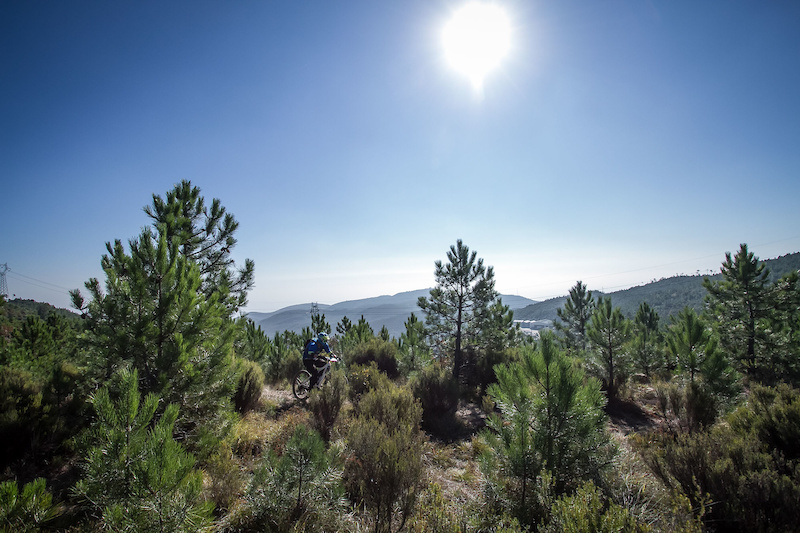 The flat section of stage two followed the ridge-line along up above Varazze. 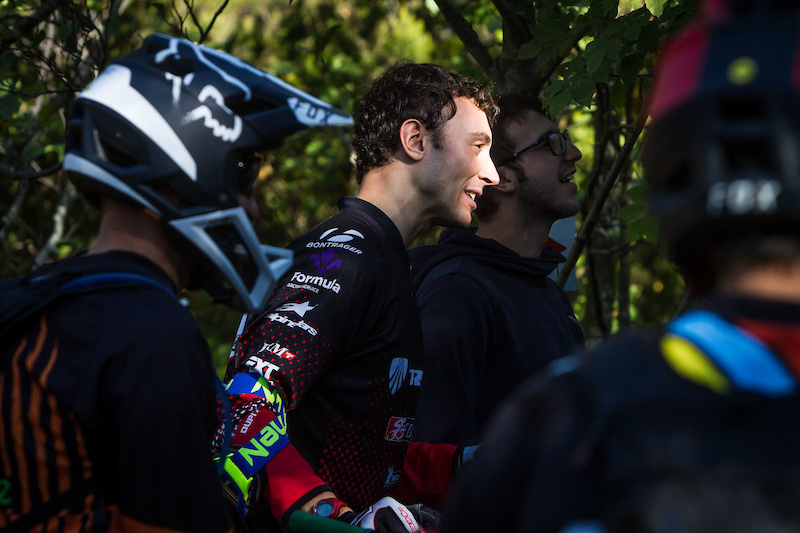 Vittorio Gambirasio the series champion was in a relaxed mood at the start of stage 4. 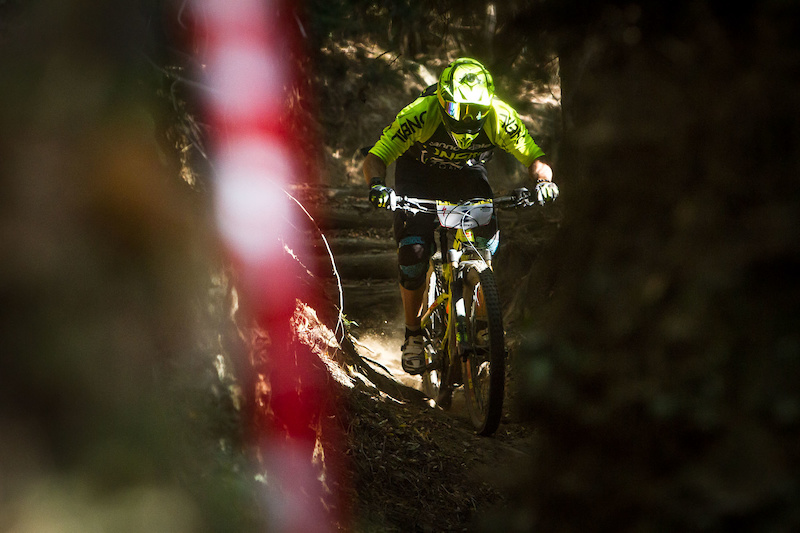 Davide Bozza who rolled over the line in second overall was treating this just like any other race. 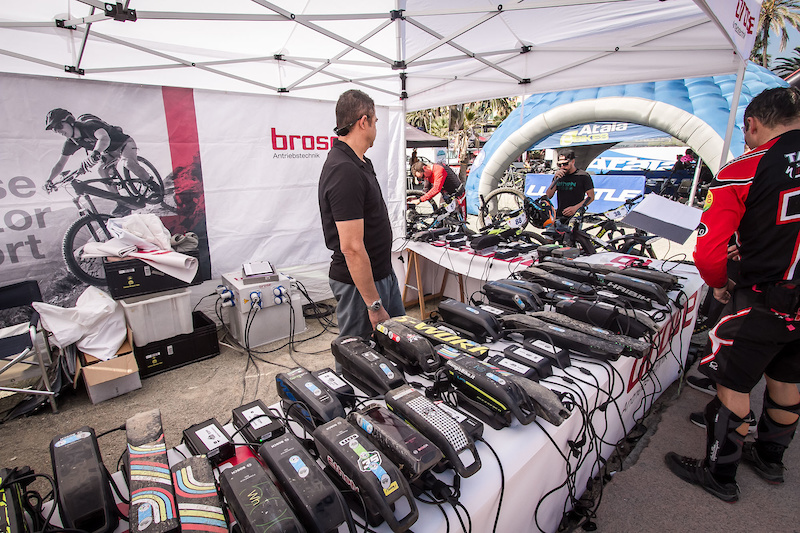 Mid-race at the time check riders were allowed to recharge their batteries for 45minutes at the official race charging station. 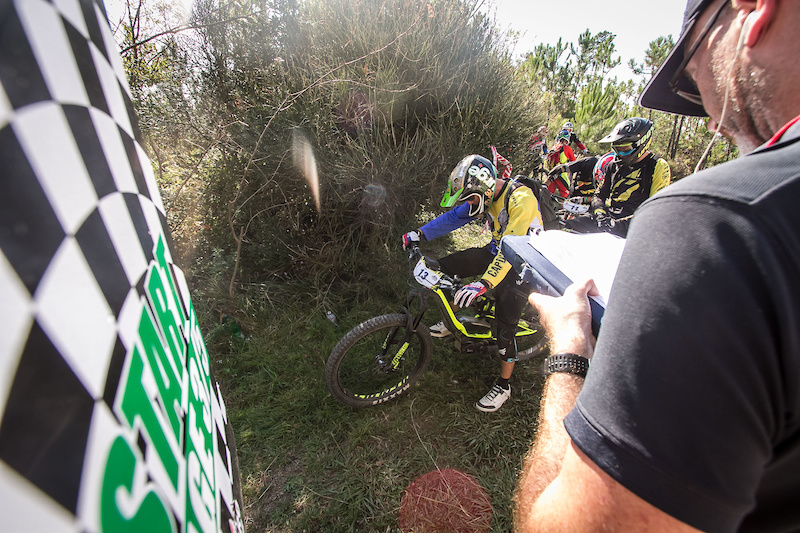 Back up to the last stages riders were getting nervous with some experiencing mechanicals and times were tight. 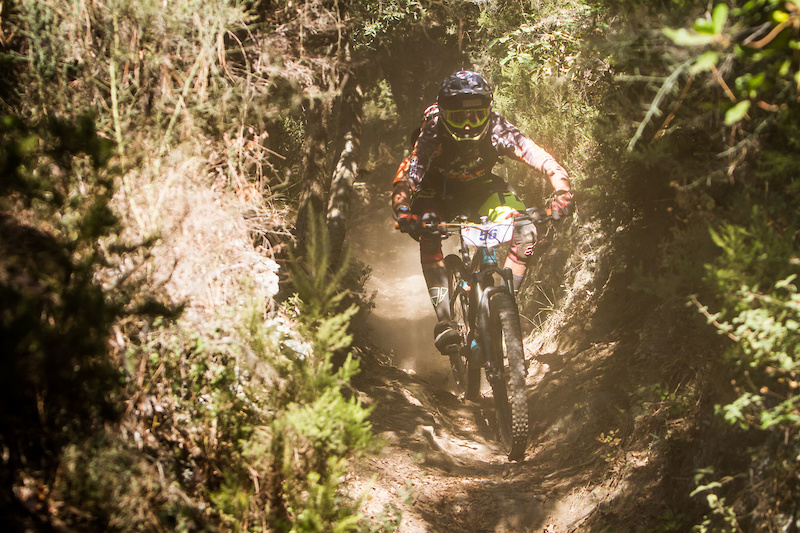 The stages were dusty and in some sections it was hard to see ahead with blind corners and steep sections limiting rider's ability to throw caution to the wind and let go of the brakes. 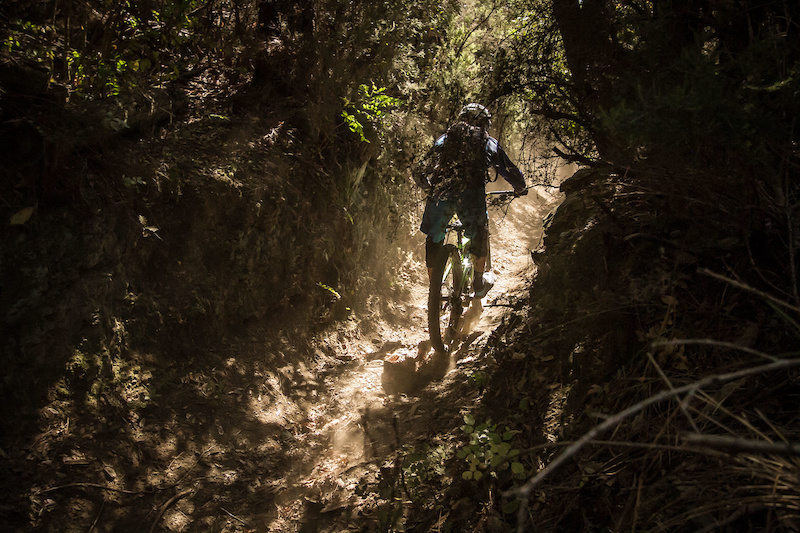 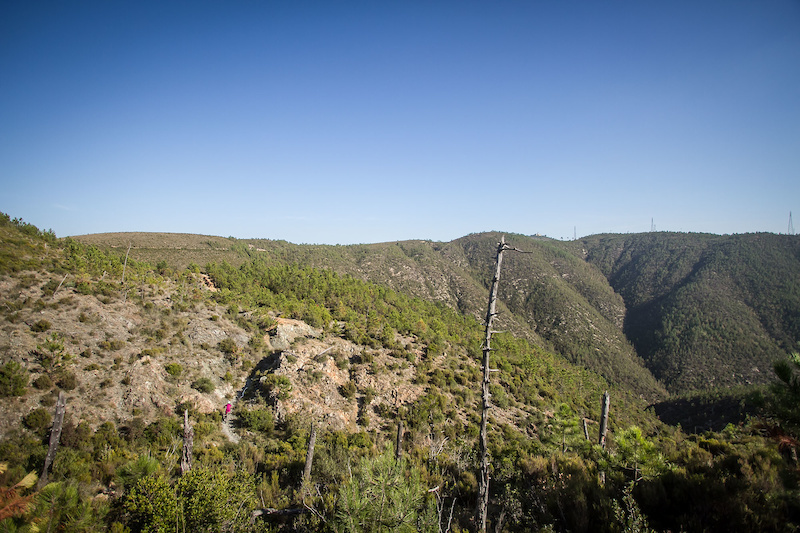 The final stage was very tough with riders having to negotiate a long pedal section up over the ridgeline before dropping down into Varazze. 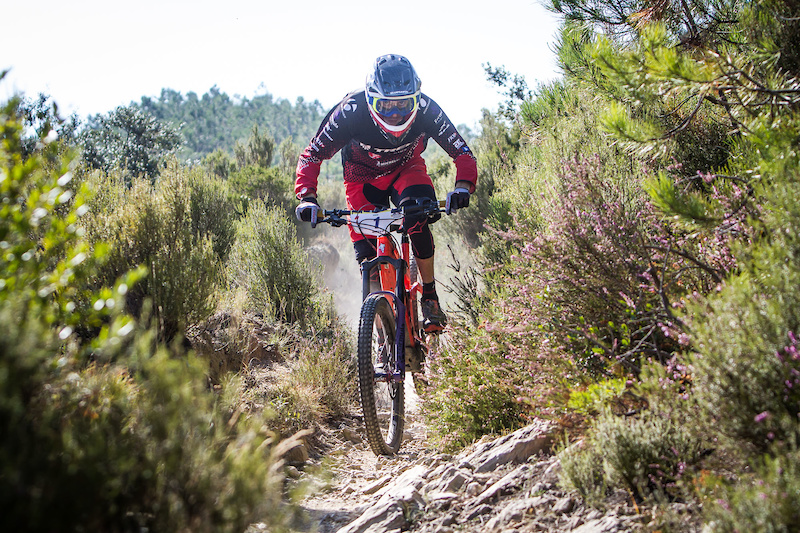 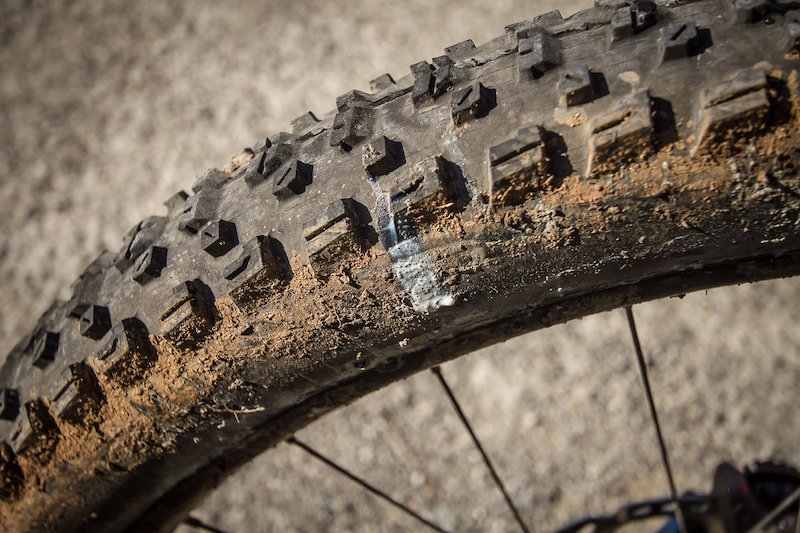 This puncture on a transfer stage finished Andrea Bruno's chances of taking the win. 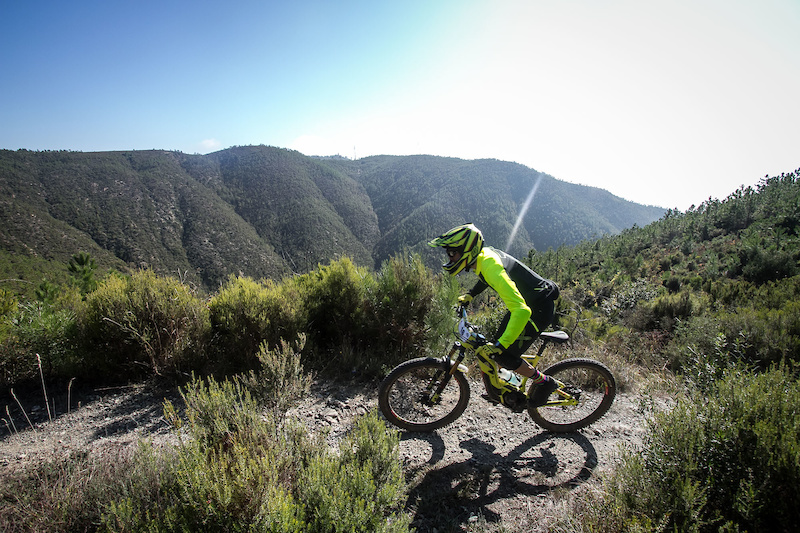 Whatever the bike style it was a great environment to ride in and amazing conditions on track. 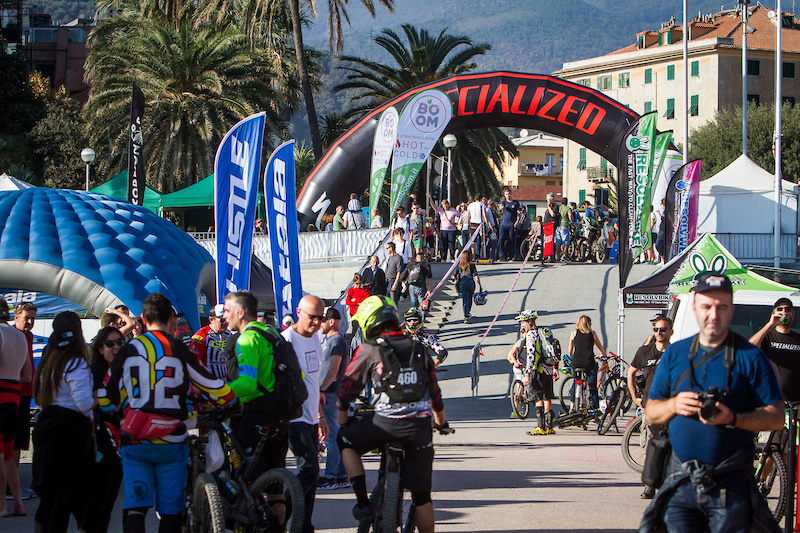 Riders make it across the line and back to the finish area after five stages and 1400 metres of climbing and descending. 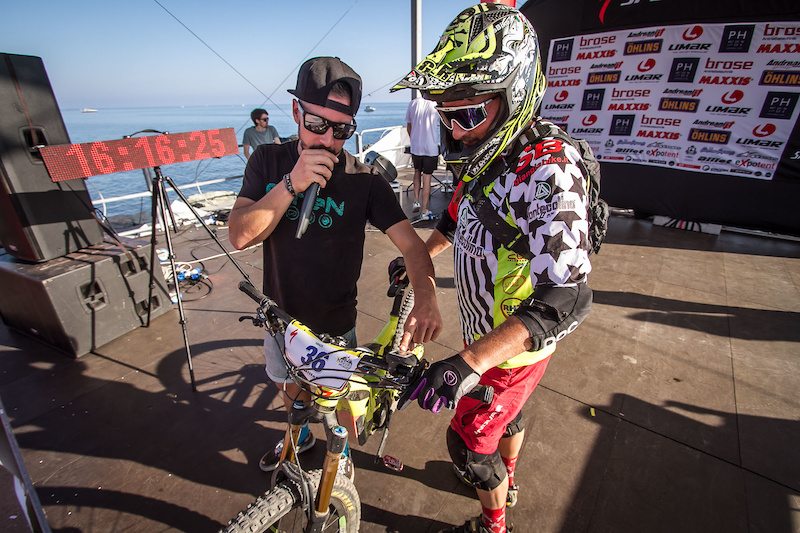 Many competitors made it back with empty batteries. 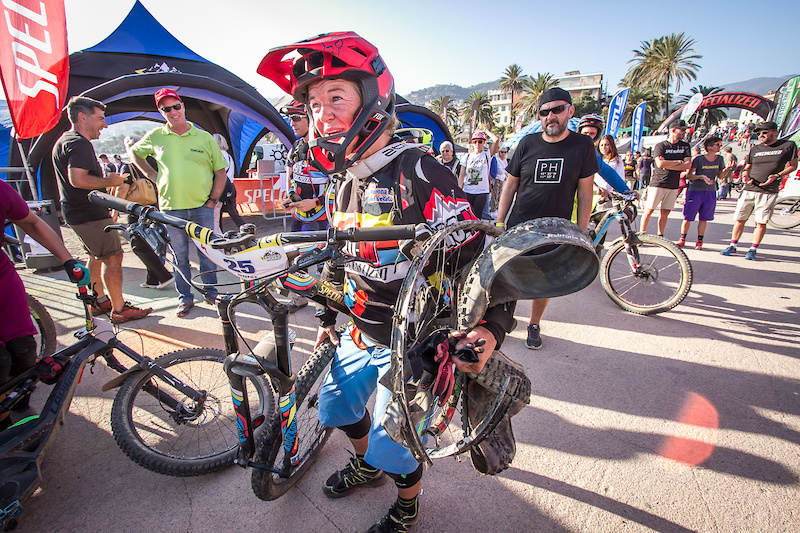 Yep, the riders go fast and live on the edge, sometimes the bikes don't survive, the aim is to get across the line to make sure you finish, in this case that involved walking for Giovanna Bonazzi. 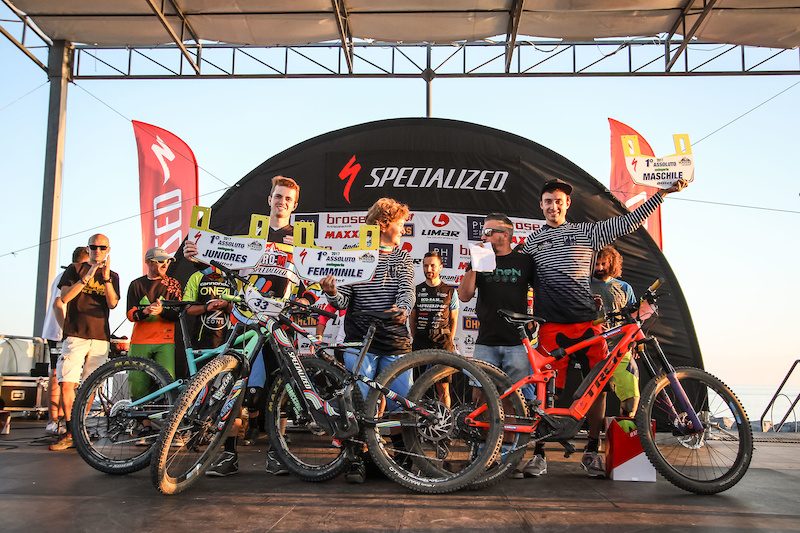 The overall winners on the podium, well-deserved results that required skill, fitness and an e-bike.

There was nothing about this race series that suggested anyone was having a free ride up and down the mountain. All the riders approached the racing as if it was a normal Enduro race, if we were to comment on anything about the style of racing we would say that riders got back to the finish as equalling elated and tired as on a normal non e-powered bike. It was interesting to watch this first race series with all the official sponsor support take place and the enthusiasm and pride with which the locals who organised it demonstrated. Mtb Enduro racing was originally conceived by the French and Italians, partly as a place to race Enduro style bikes, partly as a way to grow tourism and the knowledge of a trail area. We see no difference here and are sure that races like this will only increase in number.

almightybenners (Oct 30, 2017 at 6:58)
Imagine if this was run alongside the EWS for riders with disabilities etc. that mean't they can't ride a conventional bike. What a nice uplifting story that would be that would maybe reflect some of the negativity that seems to be around from e bikes. ...Rather than just being essentially the same as none of the riders being on an E bike and no one caring.

bikeinbih (Oct 30, 2017 at 12:28)
"EWS for riders with disabilities" what do you mean by that? You need to pedal regardless and I doubt if any disabled could really do it...

almightybenners (Oct 31, 2017 at 3:22)
@bosnianrider: for example, a spine/ nerve or muscle injury that reduces the motor function in your legs meaning you cant pedal well or someone with a below the knee amputation etc. plenty of disabilities mean that you are still able to enjoy sports or racing with the proper equipment, look at the paralympics. Why should Mtb be any different?

fssphotography (Oct 31, 2017 at 7:53)
@almightybenners: I think you might find if you try racing you need to be able bodied, experienced fit riders were coming home with nothing left in the legs...

bikeinbih (Oct 31, 2017 at 13:38)
@almightybenners: These bikes in the race are pedelecs with no throttle so the movement of the bike depends on the pedaling input. I highly doubt if amputees or people with reduced motor function in their legs can race enduro on these bikes. It's not an easy ride regardless what people think about the pedal assist bikes.

I think you are rather missing the point here....
E bikes were originally conceived to improve access to cycling.
Why not allow the people they were designed to help race on them instead of catering for able bodied athletes?
It doesn't matter if you think they can't do it I'm sure their are plenty of people who would want to try but don't have the platform to be able to race.
They only people i personally know with Ebikes are people who are no longer capable of cycling without them, some of them used to race and I'm sure would love to be able to continue if they had a suitable platform to do so.

bikeinbih (Nov 2, 2017 at 11:42)
@almightybenners: You need to convince somebody to organize an enduro race series for handicapped ebike riders or you might do it yourself if you have the money to burn. Who knows maybe it would be the business of the century...
The people you know why don’t they race in this ebike enduro series?

SnowshoeRider4Life (Nov 2, 2017 at 6:01)
MY EYES ARE BLEEDING. WHY IS THIS A THING. Everyone thinks bizet got robbed but this, this is robbing mountain biking. #mountainbikinggotrobbed

thenotoriouspkg (Oct 30, 2017 at 10:50)
Why is enduro motorbike riding on a mountain bike website?
Below threshold threads are hidden