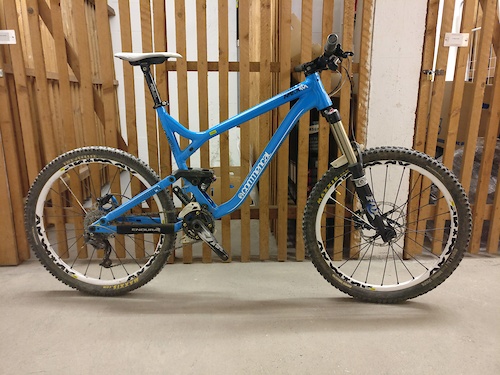 $750 GBP
Hi all. Selling my beloved Commencal Meta AM. I have had this frame from new and built it up with new parts. The bike is from 2012, however believe it or not it has never really been ridden that much. I think at most it has been ridden once every 2 months, sometimes even less. Specs Commencal Meta AM XL Fox Vanilla Float RC2 forks Fox Float RP23 Mavic Crossmax 26" wheels Maxxis tyres ( lots of others available ) Shimano Saint Cranks Shimno SLX rear mech Shimano 9 speed rear cassette (Large size good from climbing) E-thirteen chain guard SDG seatpost and saddle Thomson 4x stem Syncros bars 1.5 bars Shimano SLX Brakes (not bled) Shimano saint rotors, 180mm rear, 203 front Pedals no included. I am selling this because i have a new bike and I am moving from the country. There are a scratches/rub/chips marks here and there on the bike and some of the stickers are rubbed off. The forks sometimes weep a little oil on the stanchions and could do with a service. However they still run smooth and keep pressure. I have maintained them regularly during their life. Rear shox runs like new, it has had its Float oil replaced about 2 years ago but due to the lack of use it has not needed a refresh. The brakes are very new and only used twice. They are from my new bike swapped over (I wanted my old brakes on my new bike if that makes sense). The do require a bleed and new hose crimps as i had to disconnect them due to the internal cable routing. Other than that she runs very well and is a great ride. Pick up only I'm afraid. Will travel 20mins to meet up if needed. (Price is ONO) (NO SWAPS, NO AWFUL OFFERS, NO MUMS BUYING IT, NO ONE FROM A COUNTRY THAT HAS A POOR GOVERNMENT WHO WANTS TO SWAP IT FOR A CHEST OF GOLD AND MY) (for sale on ebay too)

$1250 GBP
Hi you are looking at an 09 Intense M6 Large £1250 or nearest offer This bike is an incredible downhill machine. If you ride fast lose and aggressive then this is really the bike you need I have been completing my university degree last year and this year, so the bike has hardly been ridden. This year I think a total of 4 times at my local track in kent (hardly hardcore). Last year once every 3 weeks most likely. (uni is hard!!) The bike has the usual wear and tear from 09. Mainly some scratches on the down tube. The stickers are worn due to them not have a clear coat of protection on them. So they do look a little tatty, but you can buy new ones from ebay easily enough. One of the upper linkage bolts is slight rounded at the front. So you must push the allen key all the way in to get a good grip then can be undone easily. The rest of the bike is in tip top condition The bike comes decked out with a CCDB which is amazing! Its set up for a 12 to 13 stone rider atm and I have spent a lot of time tuning it. Its an incredible shock. The bushes and pins in the shock where changed to steel and now apparently will last the life time of the shock, no movement!!! The bearings where changed last summer so don’t need changing for a while. The rear mech is straight and everything is working great. TI spring and Ti shock bolts to reduce weight. (steel ones will be included) SPEC M6 frame large Works candy coat blue (CRC blue) Cane Creak Double barrel shock, TI spring Stendec Steel shock bushes Titanium shock bolts Rear axle SDG seat post Seat clamp (31.6 seat tube) 1.5 reducer cups (no head set) 63.5 degree head angle, 13.5 BB. (measures from my set up with boxxers at 203 mark...she is low a slack) All in all this bike is set to ride and will last along time with no problems as its been well looked after and upgraded to last. Is been offered else where (NO SWAPS, NO AWFUL OFFERS, NO MUMS BUYING IT, NO ONE FROM A COUNTRY THAT HAS A POOR GOVERNMENT)

its a large mate and was looking for around £1400 ONO..cheers