Nov 20, 2007 at 17:05
by Bike Bros
Share
Tweet
36 Comments
I just had the good luck to have tested the KHS Lucky 7 for the last 2 weeks. I tested it out in Crowsnest Pass - the only place with good riding conditions in the Alberta Rockies at the end of November.Anyways, I always think when I read a test in a magazine or whatever, that the author needs to explain more - more about themselves, how they ride, what their personal ride is etc.

So here I go. I rode almost the entire summer on a Marin Quake 7.2 with a Rock Shox Totem. The bike was set up with a dual ring including an E13 DRS - I ride places where I have to ride up more often than chairlift hills. I like freeride trails but like the satisfaction of climbing/riding to gain my vertical.

I ended up convincing the KHS guys to let me have this bike for 2 weeks of testing. This way I'd be able to get that initial feeling - like when you notice all the little handling differences compared to the regular ride, then get a couple days on the bike once it started feeling at home.

Initial thoughts on the KHS Lucky 7 were -

1)looks good in red & white
2)the new Marzocchi 66 looks rad and has some sort of maxle style axle going on
3)the parts seem well thought out
4)I can't believe it has a Marzocchi 66, over 7" travel and a 150mm through axle rear end for only $2500. Oh, I weighed the bike too and it measured 40lbs - quite nice!

The first week the weather sucked so I got a shuttle to my favorite ride in the Crowsnest Pass called Good Riddance. The trail isn't long but has everything from steeps, to pedaling, to cornering, to drops and little gaps. Unfortunately, I was an idiot the first week and forgot to remove the KHS rep's clipless pedals. It was a challenge riding clipless with my skate shoes but I got comfy enough very quickly to do a couple stunts - that was definitely a good sign.

I had enjoyed the bike enough in week 1 to devote some quality time. This time hiking up to Great Riddance - the super version of Good Riddance that adds 45 minutes of hiking to the summit above Good Riddance. I wouldn't waste my time doing this hike to ride a crappy bike. Oh, yeah, and I remembered to install my 1664 flat pedals this time!

The Crowsnest Pass, like everywhere in the Alberta Rockies in late November was a bit chilly. The weather was around zero degrees Celsius, sunny and calm on test day - about as good as November riding weather gets. At temperatures like this I was glad to have my winter riding gloves and glad the Hayes Stroker Trail brakes had a super easy reach adjustment - as in I moved them out to make up for my fat, insulated fingers.

After spending some time gazing at the view from the Southern end of the Livingstone mountain range, it was time to point downward and rip. The Kenda Nevegal StickE tires proved to work quite well in the packed snow/ice/frozen ground. The bike handled really well overall. It felt a bit more snappy than my Marin and felt quite light too. The frame was a tad small for me but (I think it was a medium - I usually have to ride a large) was easy enough to adjust to. My only criticism was the small bump sensitivity. I couldn't tell if it was a characteristic of the Horst link, the Fox Vanilla R rear shock, the Marzocchi 66 or the frozen ground, but overall the bike was not ultra plush on the small bumps.

By the time I reached the end of the ride I was dreading having to give this bike back. I had enjoyed some excellent riding with my buddy Steve aboard this bike and would be happy to ride a KHS Lucky 7 (Guys at KHS can feel free to give this one to me... hint hint). We cruised back into town where I pulled a mile long manual but Steve was in front of me so he didn't believe me. He did believe that I liked the bike because I was sporting a silly grin. 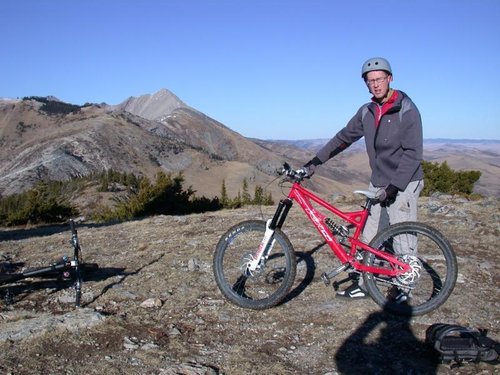 -The KHS Lucky 7 is a very good bike - especially considering its relatively affordable price.
-I must remember to take the stupid pedals off test bikes in the future.
-Kids who wreck stunts are in danger of being pummeled.
-The chain never fell off - thought it might - if this was my bike I'd be installing an e13 DRS guide.
-The bike handled quickly and felt STIFF - both laterally (very good thing) and in small bumps (is that the Horst link or the shock?).
-The red/white color is very attractive. It inspires you to buy some white Syncros hubs and rims for the ultimate in snazz.
-This bike is a "must consider" for budget minded riders.

marangerrmx (Nov 26, 2007 at 13:26)
well thats actually my new ride and i have to say when i rode it a expocycle it pedaled like a hardtail and sucked the bumps and hits like a normal dh bike, but the shock is quite stiff because khs normally has springs that are 50lbs over a stock spring so i thinks its a 450, just switch it to a 400lbs one for a squishy feel. It is the best bike for the price considering a 66rv3 and hayes strokers.

grampa (Nov 26, 2007 at 10:44)
Hey 54. Nobody will have the bike yet. The one tested was a pre-production unit. I own Bike Bros in Cochrane, Alberta (www.bikebros.ca). I was loaned the bike by KHS 'cause they're looking for new dealers in Alberta. Since testing the bike, I am interested in selling them - especially if I get the sense that there are interested potential customers out there (like yourself). Contact me and I can give you some more info.
As for the Azonic comparison, yup, as far as I can tell it is the same frame as (I believe) the B52 model. I think they altered the seat-tube to solve a clearance issue on the Azonic. Other than that, it means you basically get a complete bike on a proven after-market frame for way cheaper than you could get the Azonic.

andichinamtb (Nov 26, 2007 at 23:50)
Looks like the Fireangel Teuton S too!! How many companies actually use this frame? It's a shame a big company like KHS can't go out and design their own bike instead of just buying some generic frame and putting their name on it!

grampa (Nov 28, 2007 at 5:52)
KHS sells bikes that offer good bang for the buck - this and cheesy advertising seem to be their M.O. The bike performed well and included a bunch of parts at a price-point that is very impressive. KHS used an "off the shelf" frame design - it is a good frame design with FSR linkage - it costs money to R&D suspension frames and KHS passes along the savings in this case of not having to do that R&D.
There are many "original" frame designs out there that don't work as well as this "off the shelf" design.

ghettofab (Dec 14, 2007 at 15:55)
Rode my bike today. It is amazing. Its a bit of a slug but it does climb. I plan to get some sun a.d.d. lite's and change out the tubes to light weight ones for the first mod. The bike rides exceptionally well. Well balanced, good quality travel and alot of it and fanfuckingtastic geometry. I felt comfortable right off the bat on the bike. maybe i can get some pictures and video up.

raak (Nov 26, 2007 at 6:49)
thats what i thought. maybe it's like the banshee/mythic thing. same frames just different names depending on which country it's bought from.

bansheeripper (Nov 26, 2007 at 9:25)
All Azonics are just "Liscenced" frame designs! It's just some china company that has the frame designs, the manufacturing equipment, but not the ambition to make their own Brand and do all the advertizing to get it out there, so they figure just "Liscence" them to companies that already done the advertising over the years...

my bad.. I only read "it's like the banshee/mythic thing."

I for one am not about to drop >$2K on a bike I haven't ridden just because a girl in an ad is a hottie.

Actually who am I kidding...

grampa (Nov 26, 2007 at 11:53)
ya, the KHS magazine ads are extremely dumb. I, for one, have yet to see hot chicks waiting next to trails for "extreme" dudes on any brand of bike to show up. Can you imagine the marketing twits that come up with that junk?

Anyways, you're right, you should ride the thing first... If nothing else I'll convince the rep to make the bike available at Bike Bros a whole bunch...

blubullit (Nov 26, 2007 at 12:22)
Hey Grampa, great article. How do I find the trail head for the trail you rode in Crowsnest pass? Im from lethbridge and id like to check it out. thanks.

send me an email at info@bikebros.ca and I'll try to explain it. There are a few of us who ride a bunch in Crowsnest who will hopefully be getting things mapped down there soon. I'm an "outsider" but the locals have been awesome for showing off the local rides - the people who ride&live in Crowsnest Pass are really good folks.

ghettofab (Dec 5, 2007 at 23:06)
I just got mine today. Its still in the box at work. I will be christening it this friday on my favorite trail, let you know what I think afterwards.

niesen-ranger (Nov 27, 2007 at 2:27)
this is a taiwan Astro frame and same like azonic acefactory or kraftstoff.

ghettofab (Dec 7, 2007 at 0:40)
went to build the bike today and it had a bent derailuer hanger, besides the shipping damage the bike looks bad ass.