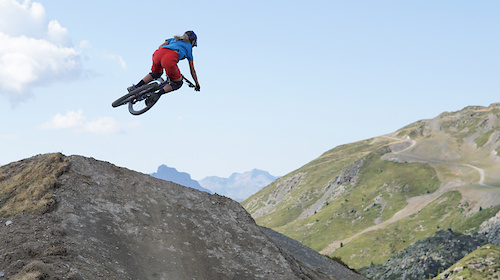 gravitysgirl Tweedlove's article
Feb 3, 2020 at 4:13
Feb 3, 2020
TweedLove on Breaking Down Barriers for Women in Enduro
Whatever you all think about barriers/confidence/mummy genes, the fact is that there are women out there who DO lack confidence, who ARE worried about hurting themselves, who ARE worried about "getting in the way" of faster riders (that's the most commonly cited worry about racing, in my experience). There ARE women out there who won't believe they can do skill X unless they're shown/taught it by another female. Like you guys, I don't get it. I have been mountain biking for about 25 years, I started when I was young, I've always raced and ridden wherever I like without even thinking about these things. But just because that's me, and I don't get it either, doesn't mean it's not an issue/barrier for other women. Just like some guys can't/don't want to jump, race, or get hurt! We're all different, but generally speaking these issues appear more prevalent for women in this sport. Oh and as a person racing from around the age of 17 (junior age) but having to race with the big girls (senior age group in UK cats), and all that, I feel the frustration of wide age groups.. so, well done Tweedlove for creating basically the same categories as the guys have.

gravitysgirl ManonCarpenter's article
Jan 11, 2020 at 13:40
Jan 11, 2020
Video: A French Alps Adventure with Manon Carpenter and Emily Horridge in 'Mount Thabor'
@granjak: when we went up there (i.e when this was filmed, autumn 2019), there was a massive sign on the door of the chapel on the top saying it was unstable and not to go inside. It may even have had the door blocked so you can't, but I can't remember. So don't plan on doing that. It's also way more comfortable to stay at a refuge ;)

gravitysgirl LouisCitadelle's article
Dec 1, 2019 at 6:57
Dec 1, 2019
Video: A Creative, Self-Shot Edit - Loner
Nice work! That must have taken some time between setting the camera up and editing it all. Looking forward to the next one!

gravitysgirl pinkbikeoriginals's article
Nov 14, 2019 at 3:56
Nov 14, 2019
Video: Getting the Most Out of Corners - Full Enduro Episode 5
to be honest, I've been thinking this too. Ep 1, I was like WTF are those bars, but actually everyone else's bars are not really too dissimilar a width in each episode. The difference seems to be most noticeable when seeing master and student from side on. Zoe's back's at like 15 degrees whereas everyone else's is at 30. Made up angles, but you get the idea. Standing a little taller (bringing hips forward a touch, and opening them/unbending) would give the bike more space to move around which goes hand in hand with being looser :)
Load more...
34,251 views