Mar 26, 2013 at 23:26
by Rob Dunnet
Share
Tweet
There are always rumours about Asian bicycle companies wanting to build their own private trails to test their bikes on. Most times nothing materializes out of the rumours, but in the past couple of years things have started to happen. In 2012 VP Components built a BMX track and trails in Taichung, Taiwan. 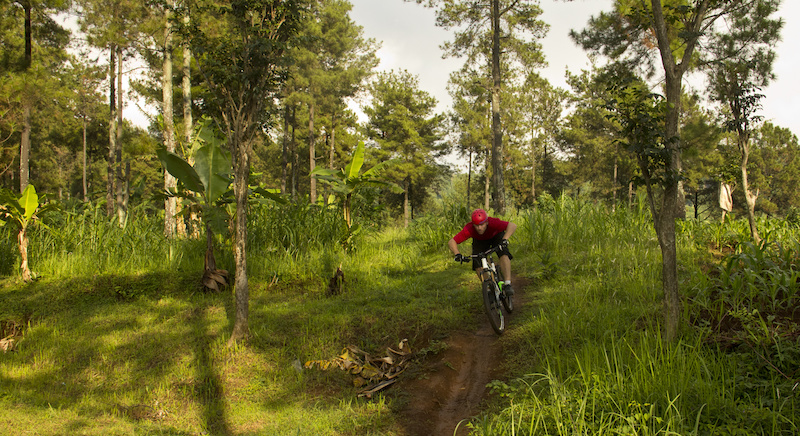 Wim Cycle has been building DH trails in the mountains around Surabaya, Indonesia, and has a BMX track near the city center.

How this project fell into my lap is a story in itself. Before heading to Indonesia on an epic riding adventure I met with Polygon's head of R&D, Zendy Renan; we talked about several things including that they wanted to build a bike park outside their factory. While in Indonesia I met with the owner of Insera and the bike park project started looking like a reality. After several meetings with Zendy and Yustian Nimara, the head of Marketing, the project was a go, and they wanted to start as soon as possible.

I have built trails and jumps for myself and helped organize the Camp of Champions Compound in Whistler, but I have never had to design and build something on this scale before. Luckily I have friends like Sam Pinner who have years of experience playing in the dirt and are always interested in traveling around the world to help a friend.

We had roughly two weeks to come up with a site plan before we arrived in Surabaya. Being on opposite sides of the world and on opposite sleep schedules made it difficult to plan. I had seen the project site and had a good idea of the size of area we were dealing with. Sam was working off CAD drawings and pictures that I had taken. The full scale of the project would not really sink in until we were both in Indonesia. 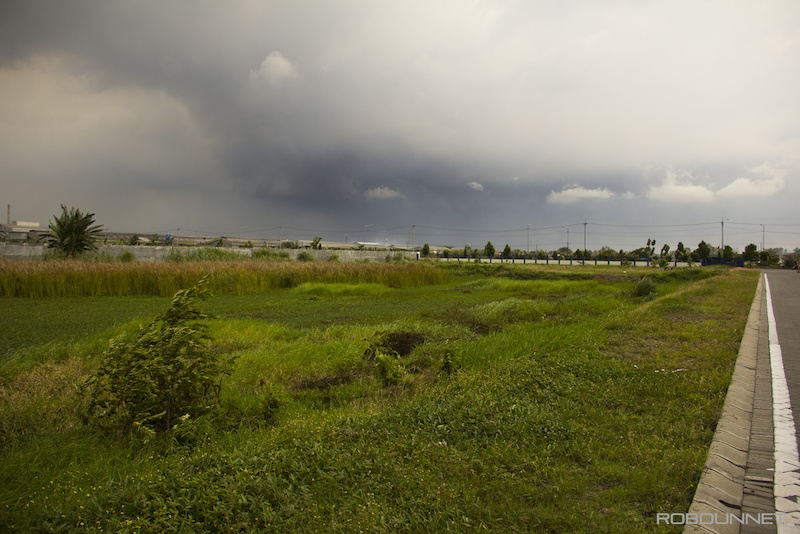 This is what the land looked like before we started the project. One of our first obstacles was to level the ground before building our hill. That meant filling in a meter deep 50 meter by 50 meter pond. The dirt supplier estimated it would take a week just to fill in the pond.

The first load of what would be thousands of loads of dirt arrived on the 6th day of being in Indonesia. None of the trucks had automatic opening gates, an assistant in flip flops or barefoot would use a hammer or rock to open the latches on the doors. He would then use his lightening quick reflexes to get out of the way of falling dirt and rocks. Sam was stoked when the first truck arrived. As more trucks came we kept wondering if we could get some dirt with our rocks.

Trucks were slow coming as it was a two hour round trip to bring dirt. Our bulldozer operator didn't waste any time pushing the dirt into the pond. It wasn't long before we had a peninsula jutting out into the pond. 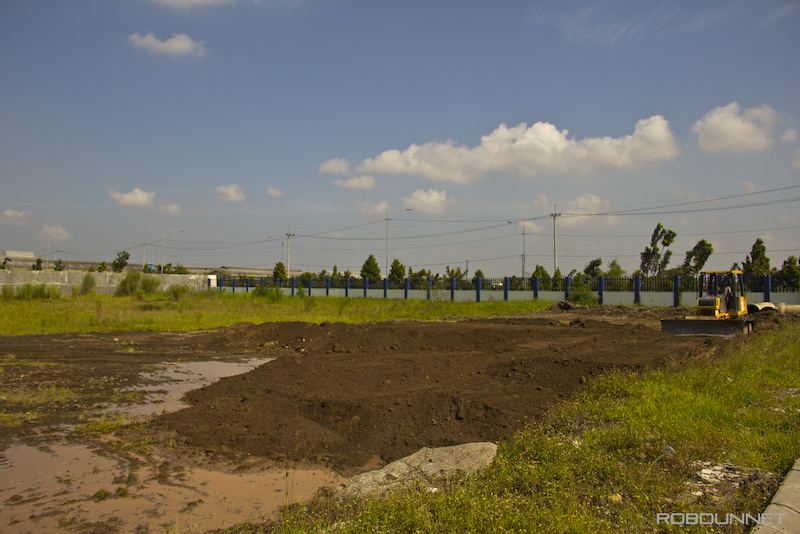 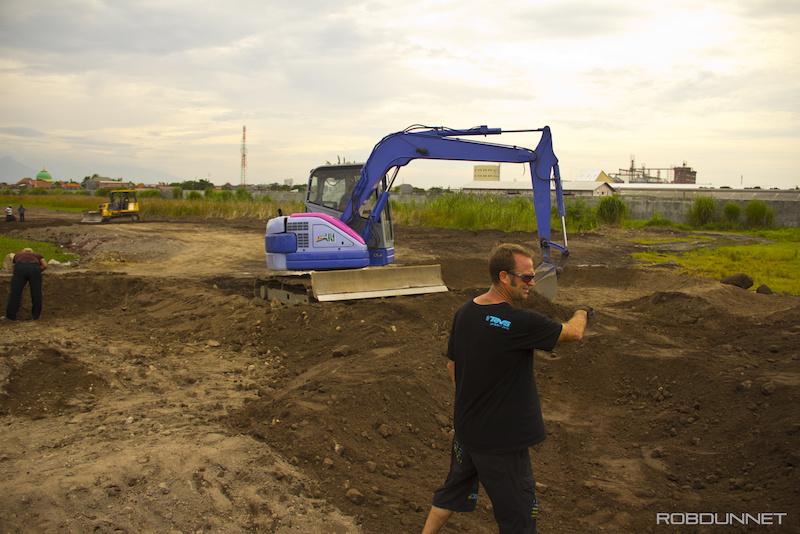 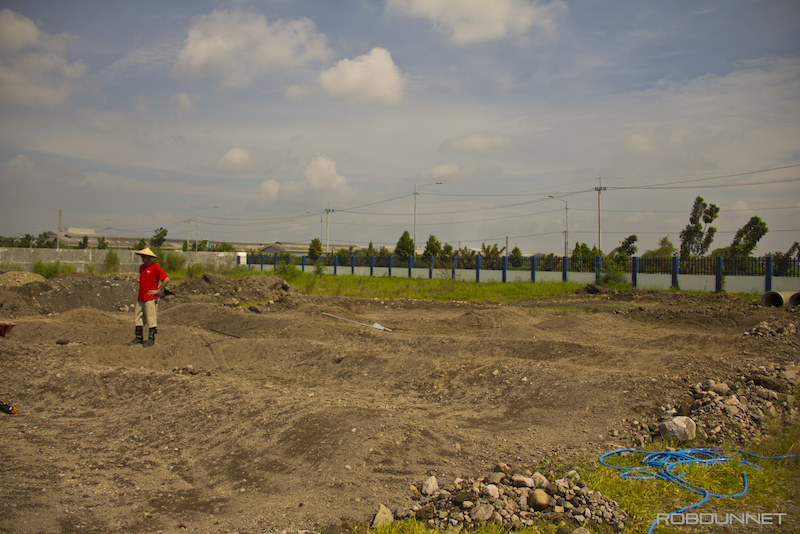 After a couple of days of solid work with an excavator and a couple of labourers we had an operational pump track. 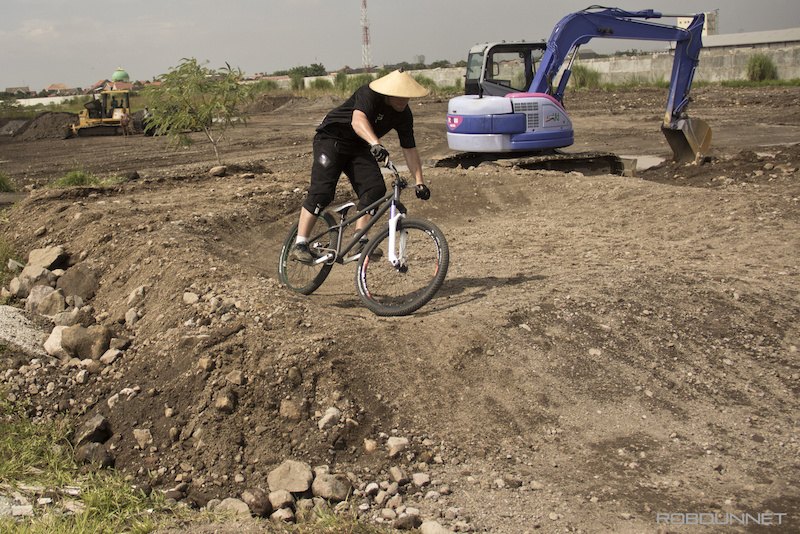 After a couple weeks of being stalled, re-planning and setbacks it was awesome to finally ride something we built in Indonesia. 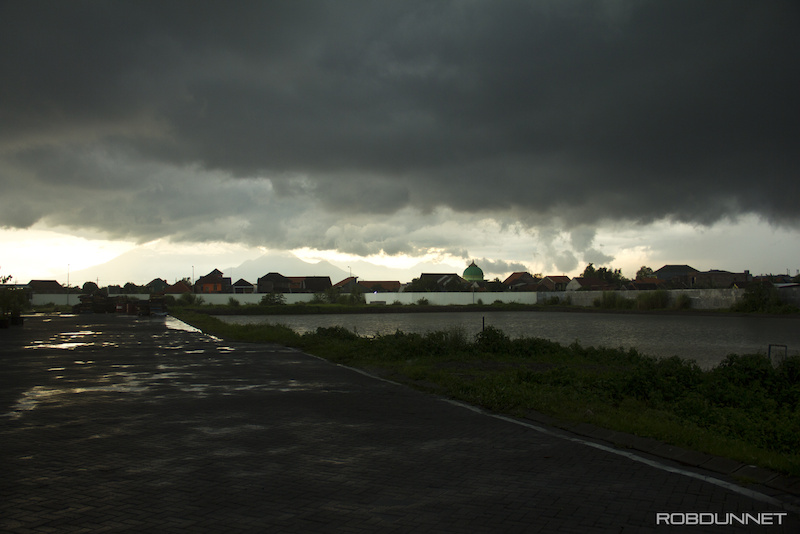 The winter months are the rainy season in Surabaya; daily rain storms became a problem and we had to adjust our work schedule and plans because of this. 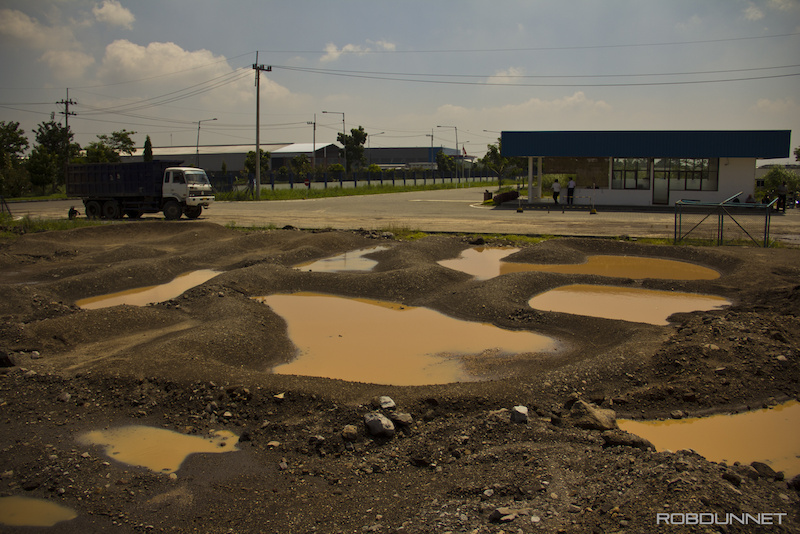 As the rain kept coming and our hill kept growing it was apparent that we underestimated the rain and elevation of our pump track. Once again we were back to the drawing board.

Progress was being made on the hill, it was being built in terraces, meeting after meeting we tried to explain to the contractor that we wanted it to be build into a continuous slope to avoid water pooling at the lower level. We eventually gave up on trying to communicate with the contractors and started talking to the excavator and bulldozer operators. With a series of drawings drawn on my hand I explained that we wanted a continuous slope and not terraces. Things started moving in the right direction after this. 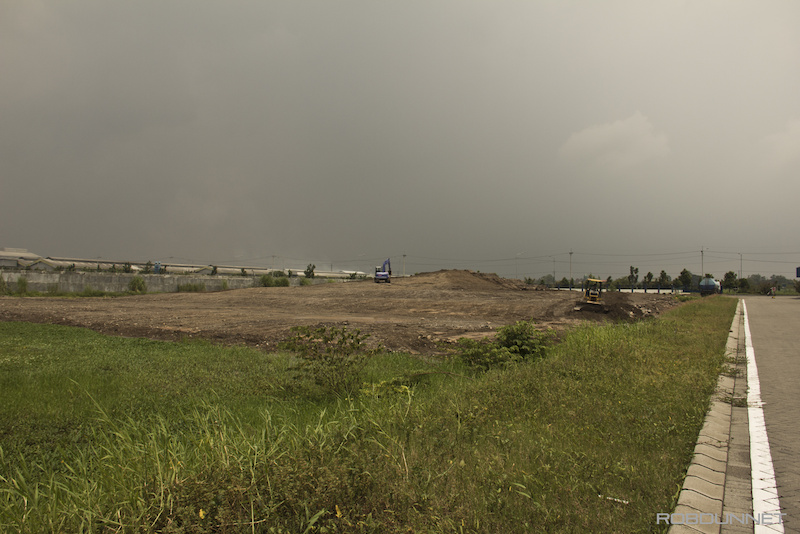 We finally had a hill and some momentum behind us. It was time to rebuild the pump track and start building jumps. And then the dirt stopped coming, we started to shuffle dirt around so that we could rough in all of the features we wanted to build. 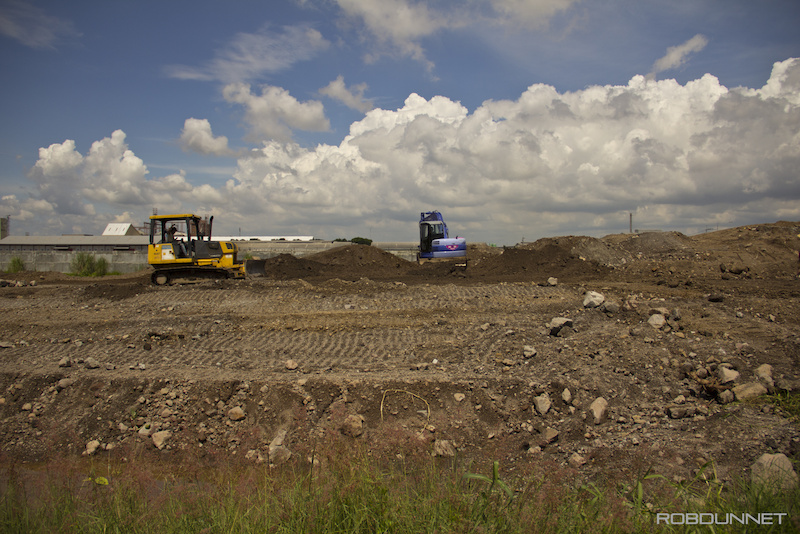 We started stealing dirt from other areas with the bulldozer so that the excavator was constantly working. 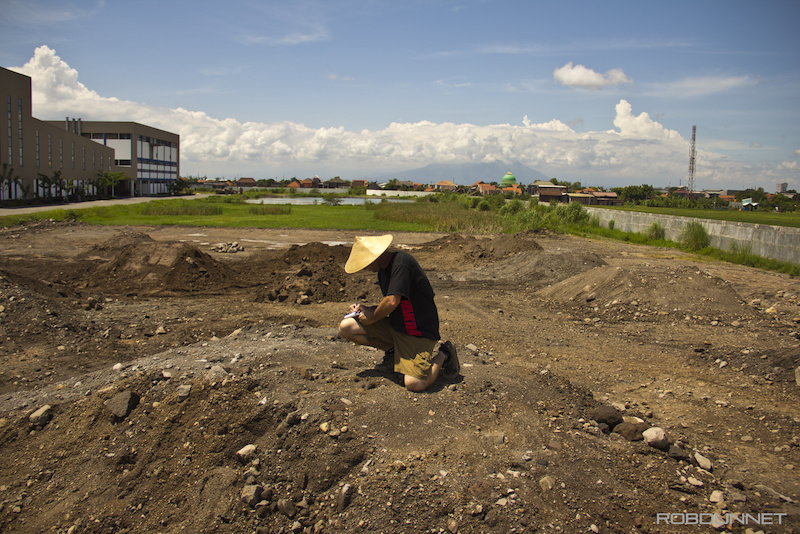 With our 30 day visa running out, Sam and I had to be willing to change things on the fly. We were constantly drawing and writing directions to the operators to keep things moving.

After 25 days filled with delays, planning and reworking we finally had something to show for it. Everything was in place and we just needed to shape the jumps and place the North Shore bridges.

Sam and I headed to Thailand for a couple weeks to visit family and rest. The park sat relatively dormant while we were away. After arriving back in Indonesia, we had 18 days to finish things off and we worked 7 days a week to make it happen.

With a little bit of help Sam started rebuilding the pump track. 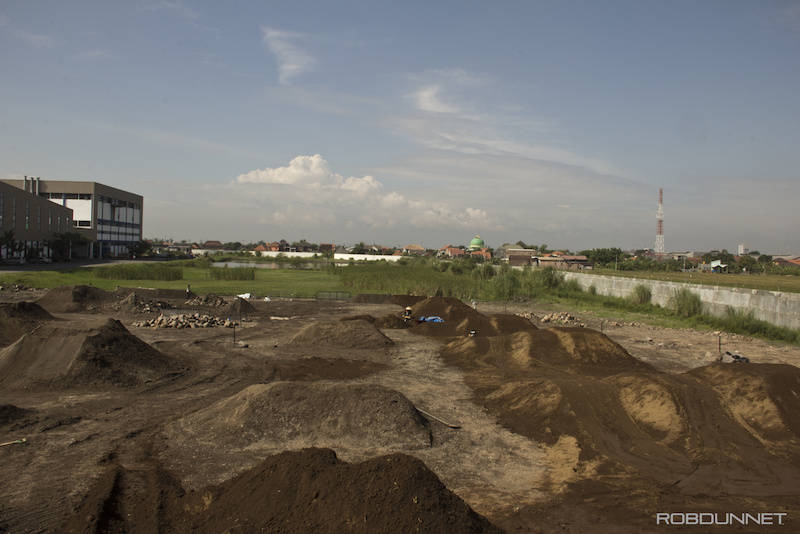 Better quality dirt arrived and I started moving dirt and shaping lips. We were hoping for the help of a Bobcat, but we had to settle for 5 guys with shovels and wheelbarrows. It slowed things down considerably and we had to push hard to get things done. 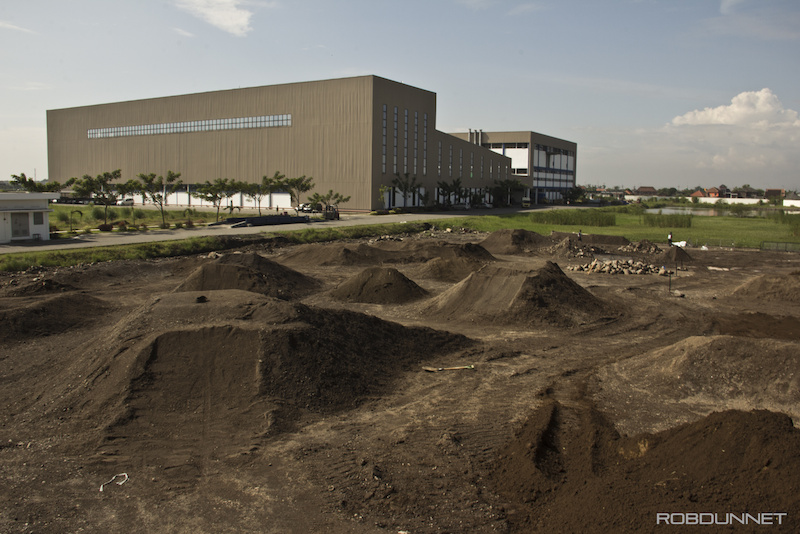 Days were spend shaping, testing, reshaping and testing. The goal was to make everything safe before leaving Indonesia.

Three days before my flight home things were looking great. I had ridden all the lines and everything flowed together. That night we had the worst rain storm since arriving in Surabaya. Arriving at the factory the next morning was heart breaking. The water had damaged almost everything, I would spend the next two days getting everything fixed before leaving. 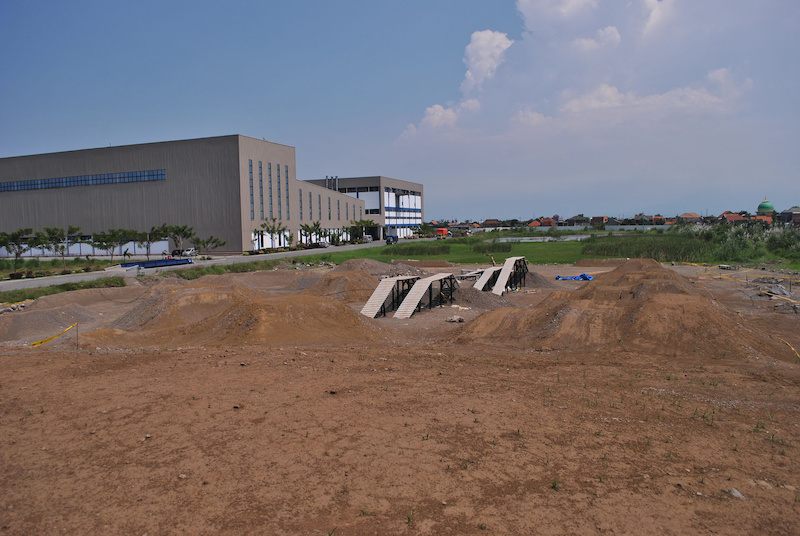 Sam spent the three days after I left laying out and installing North Shore inspired features. 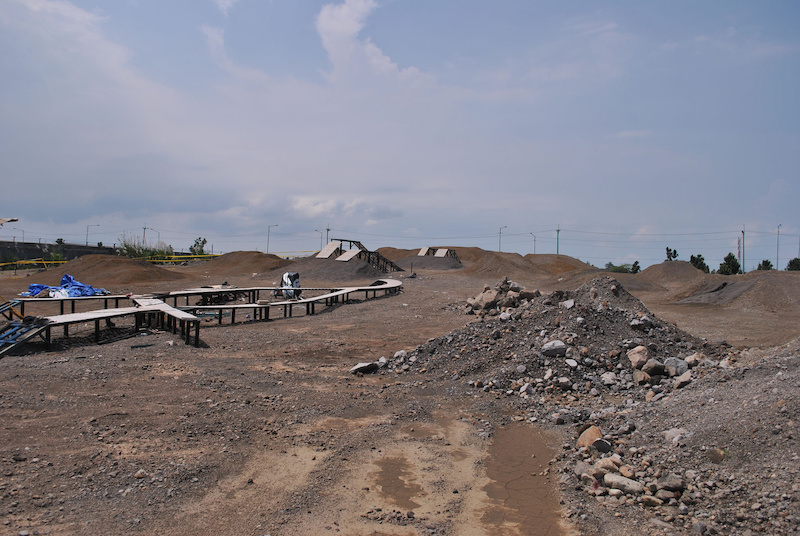 Some clean up left to do, but the ladder bridges are looking like a good time. It's a shame I did not get to test them. 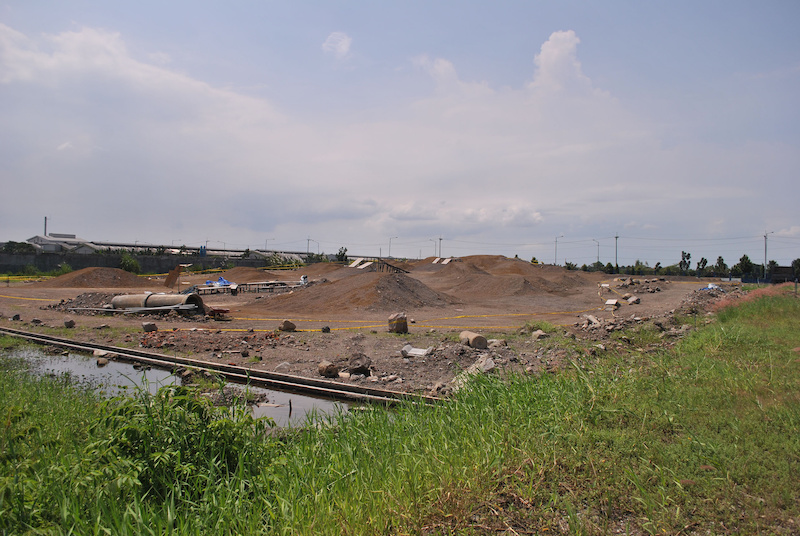 Once grass is planted the park is going to look great. It was an awesome experience and I hope to go back to Surabaya to ride soon.

I could sit here and point out all the things that went wrong while in Indonesia, but looking back on this project it was an amazing experience. Sam and I met some amazing people and got to ride bikes in the jungle of Indonesia. The project was a success and the people of Insera/Polygon have a place to develop their riding skills and test their bikes. Good friends in a new country, riding bikes and spreading the love of digging. What more can you ask for? 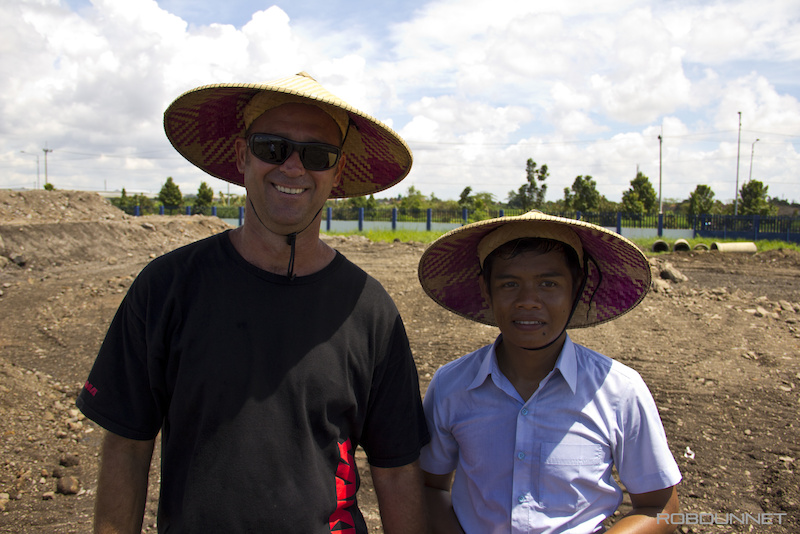 Big thanks to Joni Saputra for helping us translate and to everyone at Insera/Polygon for the build project of a life time.

For more of my time riding in Indonesia, check out my blog and this video.

For more information about Polygon and their bikes, please visit www.polygonbikes.com.

leelau (Apr 1, 2013 at 21:10)
As a young kid growing up in Malaysia biking seemed like such a frivolous orang putih/qwailo/whiteman activity. It seems now that Indonesians (and Malaysians by other accounts) are starting to realize that all work and no play is a life out of balance. Tip of the hat to you for being an ambassador for such a cool thing like biking to a country where you're still probably very much still a pioneer.

and good luck with the monsoons; you'll need it.

Thrillride (Apr 1, 2013 at 22:07)
Waiting for crap dirt, visas, and being in a foreign land? How does San Diego not have a park yet, San Diego Mountain Bike Association has been in the process of trying to get a park for like 3 years, what does it take to get a park in like this?!?!? I hate to beg for a park in San Diego since we have so much, but please SAN DIEGO NEEDS A MTB PARK!!! Come do this in SD and you don't even have to have visas!

bumblebeezack (Apr 2, 2013 at 3:10)
There's a lot of riding going on in Asia if u guys know where to look for it. And we get the good bikes too... Just wanna put that out in the open. I'm Asian and I have been riding for close to 20 years. My first hardtail was a GT Avalanche and my first full sus was an AMP B3. How times have changed when it comes to bikes! However, I agree that riding MTBs have really proliferated in Asia as a whole recently.

DownHillProductions (Apr 2, 2013 at 7:48)
you guys did a good thing. It will be sweet to see some grass growing and locals riding the park.

SoCal-AM (Apr 2, 2013 at 21:32)
@Thrillride, yes! San Diego really needs a park! Southern California/San Diego has an awesome climate and is a great destination for riding in the winter but we don't really have any GREAT trails or places to ride. Yes, there are a few sweet places around (although God help the beginner who's trying to find them) we don't have any really wonderful riding like they do in many other parts of the country but there's lots of potential here! It's time for SD to get a sweet park/trail system that's legal and easy to find/get to.

doyglas123 (Apr 1, 2013 at 22:20)
I personally know the frustrations and rewards of building trail in Asia, building with an excavator driver that is trained to dig holes and has no idea what you want him to do and the constant drawing and sign language is almost impossible. It looks like you guys did a great job and got it done right, what you have built is amazing and will push the local DJ scene. Looking forward to the edits that will come out of this place.

scott-townes (Apr 2, 2013 at 8:07)
You have the balls to do something that I doubt many people would do. It's awesome hearing stories of people going to other countries and opening up an area for local riders to have fun legally and safely, while introducing others to the joy of riding. For another story like this, check out the Decline with Marc Beaumont on the cover. A group travels to Japan to build a bike park and to experience the culture.

scapegoat2010 (Apr 1, 2013 at 22:04)
Thats soo sick, stoked to see it spread! Hopefully it will really go everywhere! PinkBike has been glitching pretty bad for me since earlier today... kinda annoying but an easy fix by reloading the page. Anyone else notice this?

scapegoat2010 (Apr 1, 2013 at 23:39)
yeah, today! its like: the page starts spinning or just disappears or goes shooting across my browser screen... only with this website though, so it cant be my computer... should be good soon though.

whaliejennings (Apr 1, 2013 at 21:38)
This would be a perfect place for me to Kite board during monsoons and shred when the puddles subside.

aircontrol (Apr 2, 2013 at 5:49)
cool things happen when young people run the bike industries !. thanks to everyone who bring this sport to my country