Ron and Jackson Goldstone drove from Squamish to California for an event at Woodward West. They picked me up at LAX after a twelve hour flight from Taiwan. The plan was to attend the Santa Cruz Bike Festival and Sea Otter, but we had the whole week to kill in California before heading north. Our first stop was the new Fox Racing office in Irvine. 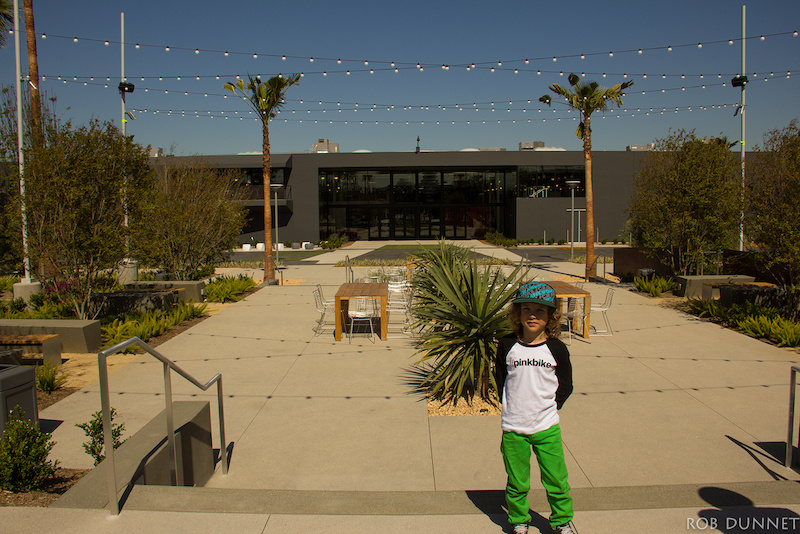 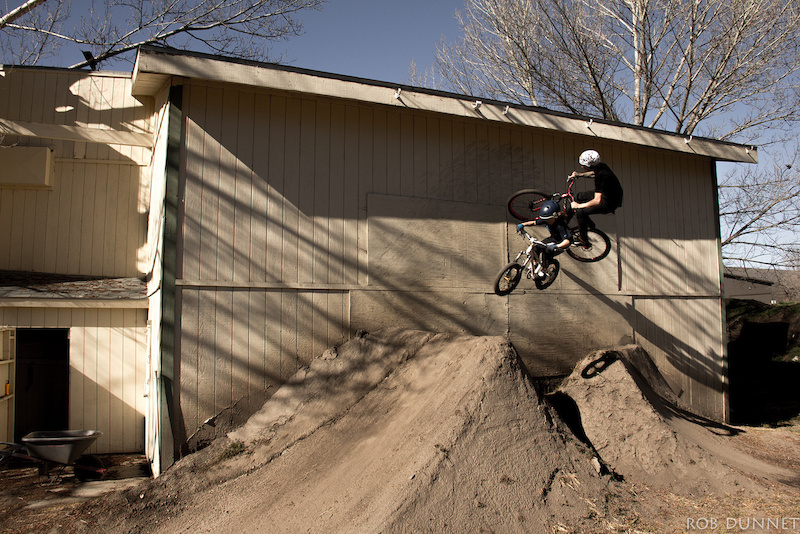 After a short stop in Irvine we headed north to Tehachapi to spend the day riding with Jake Kinny at Woodward West. Jake Kinney has been a great influence on Jackson. Without people like Jake, Jackson would not be improving as fast as he has been. 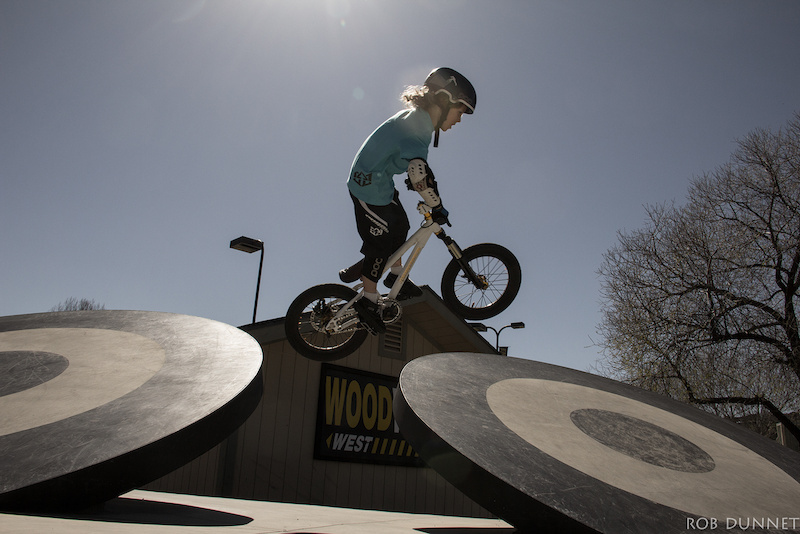 Jackson described Woodward as the place where his dreams come from. Jackson was invited to ride there the weekend before I arrived in the USA. After spending the night in the van he woke up in front of Woodward; dreams come true. 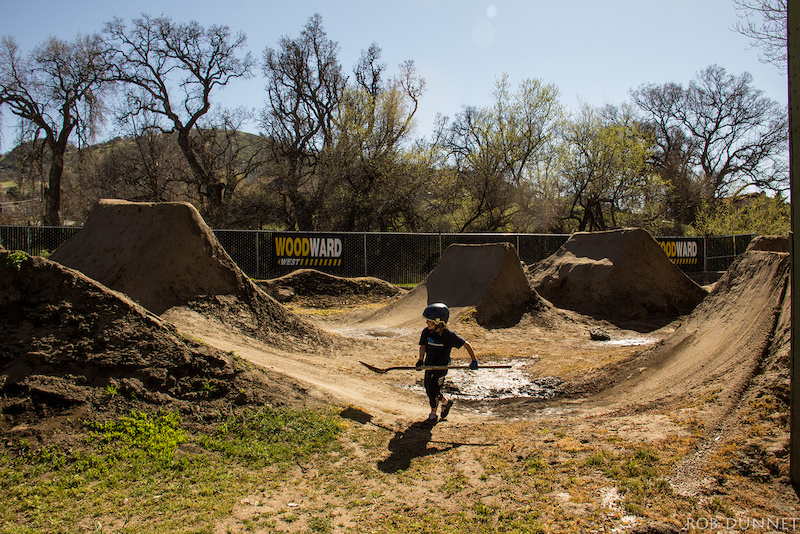 No Dig No Ride is a motto that a lot of mountain bikers live by, Jackson earning his laps at Woodward. 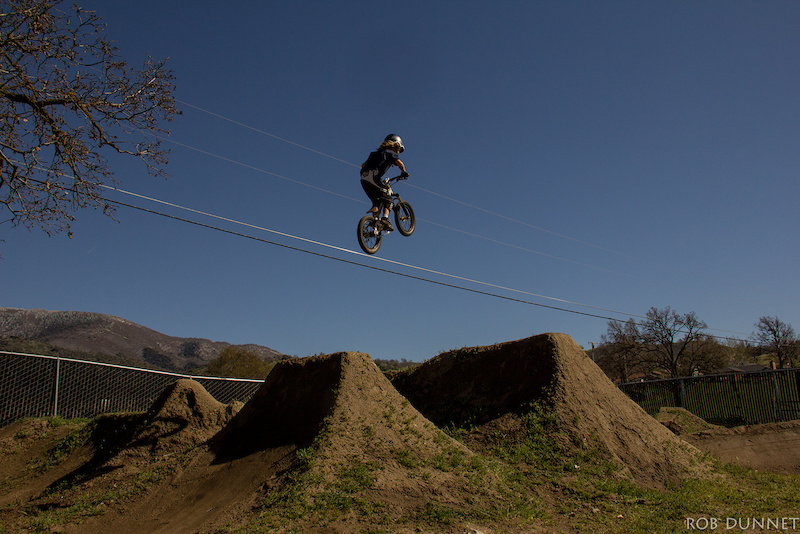 This jump is easily twice Jackson's size. Watching him drop in for the first time my heart was probably pumping faster than his. 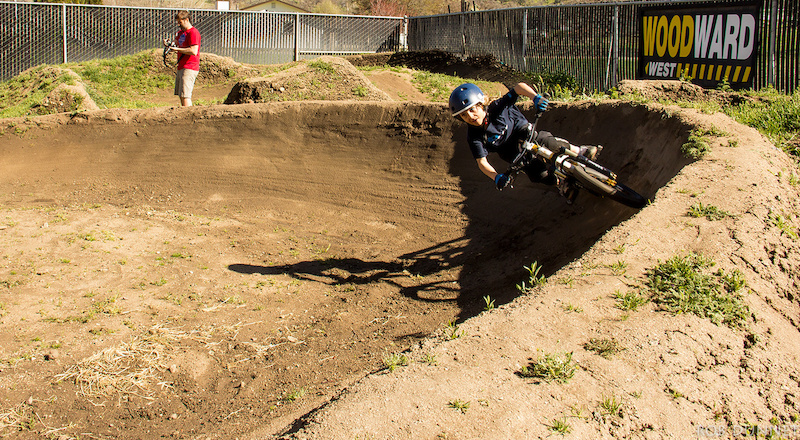 Woodward has been involved in creating and shaping a lot of great riders over the years. While we were there Jackson was riding with Pat Casey and Coco Zurita. 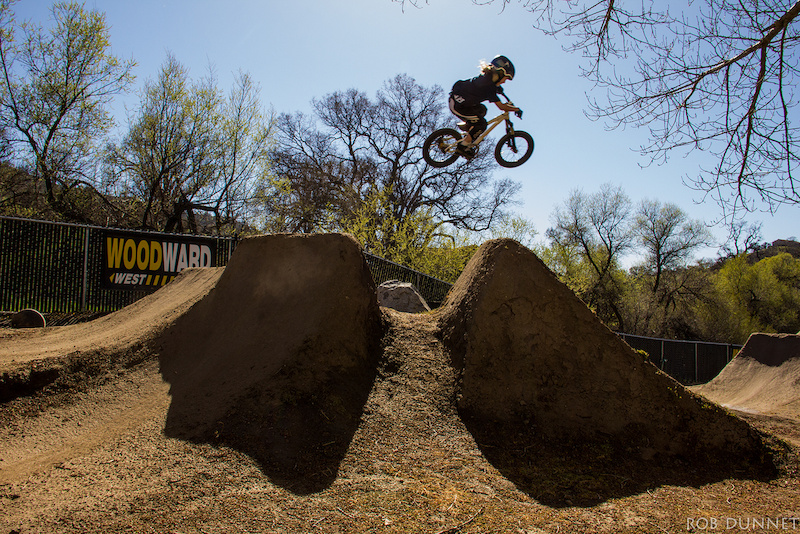 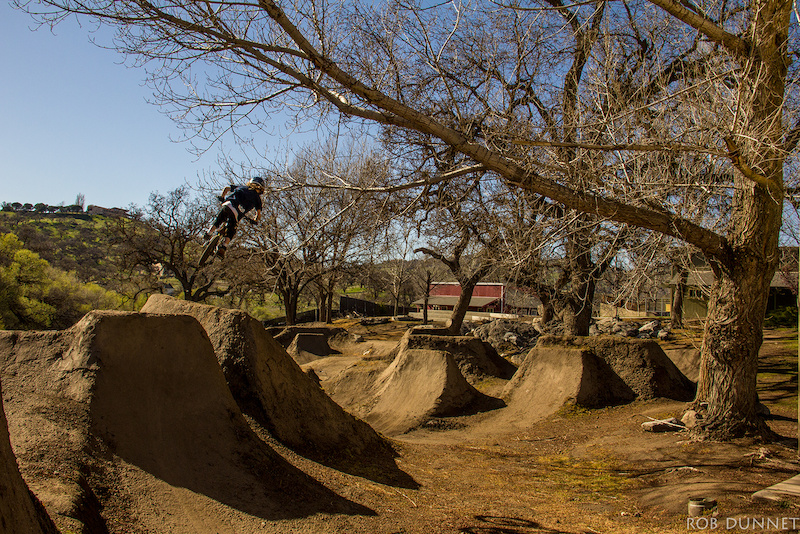 The Luv Line at Woodward is no joke, it was amazing to see someone so small make it through this line. 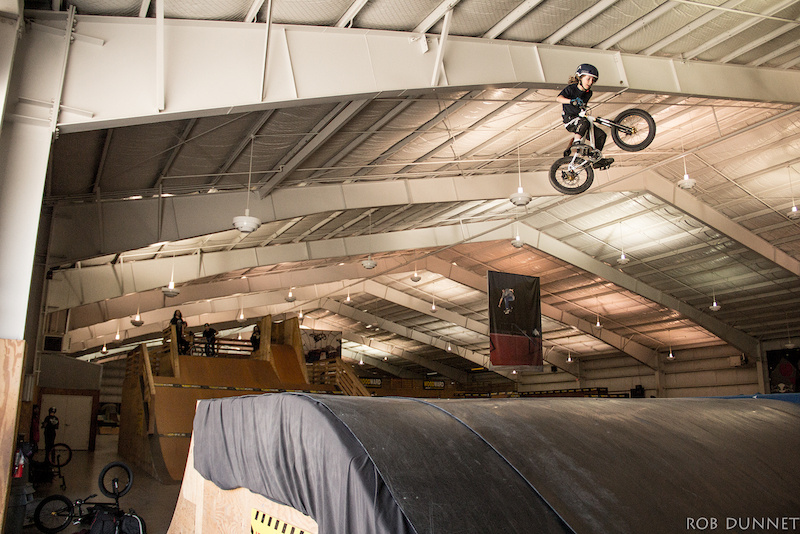 Jackson has learned a lot of tricks on the resi at Woodward West. 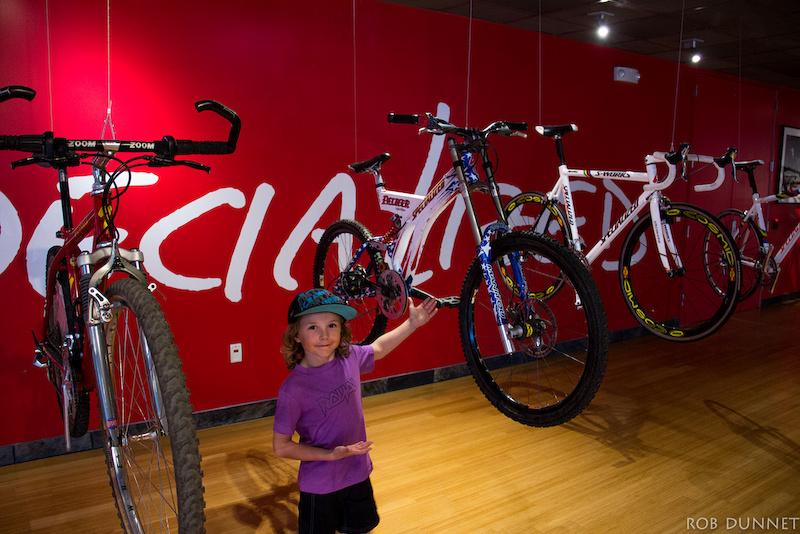 We made a detour to Morgan Hill on our way to Santa Cruz to see Geoff Rogers at Specialized. The stop in Morgan Hill started with a history lesson in the Specialized museum.

After our history lesson we had a lesson in physics in the helmet lab. The only time Jackson was still the whole trip was while Clint explained how Specialized designed their carbon DH helmet. And no trip to Specialized is complete without going down the fire pole into the main lobby. 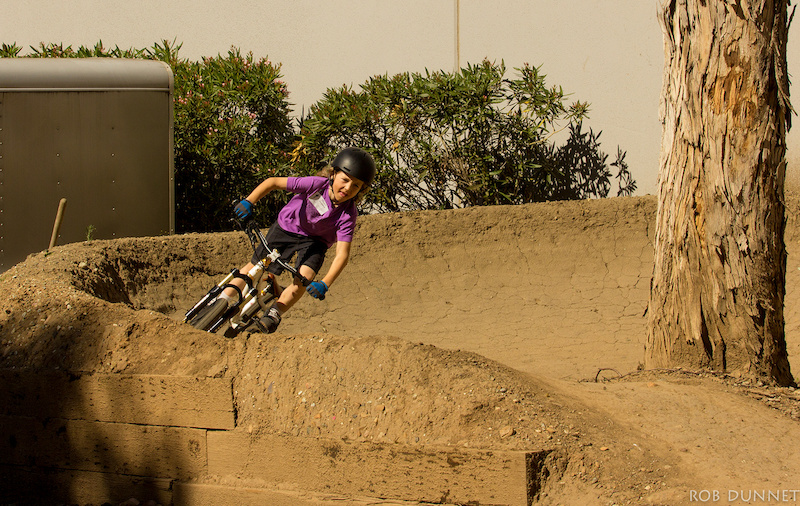 After the tour of the inside Jack put on a lesson of his own while riding the pump track in Specialized's back yard.

Jackson at the most famous Post Office in the mountain bike world. From the sounds of it this might actually be the year that the jumps get torn down. 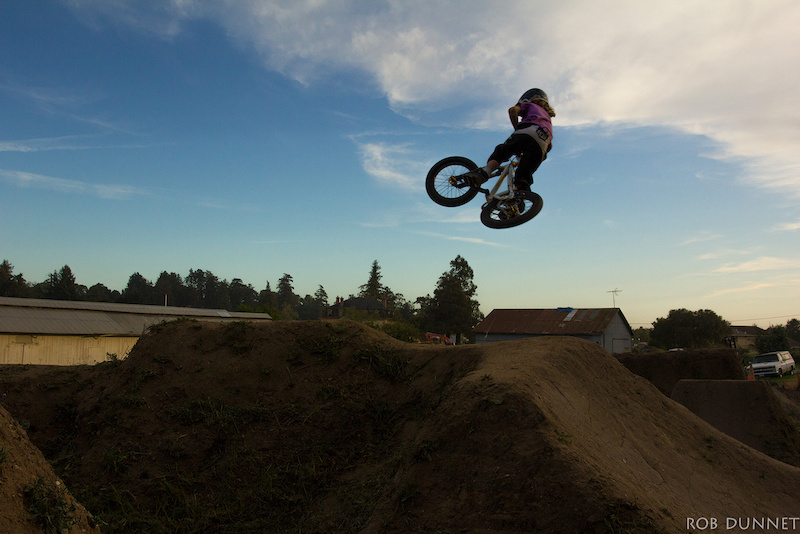 Jackson invented his own line at the Post Office and rode with all the locals. 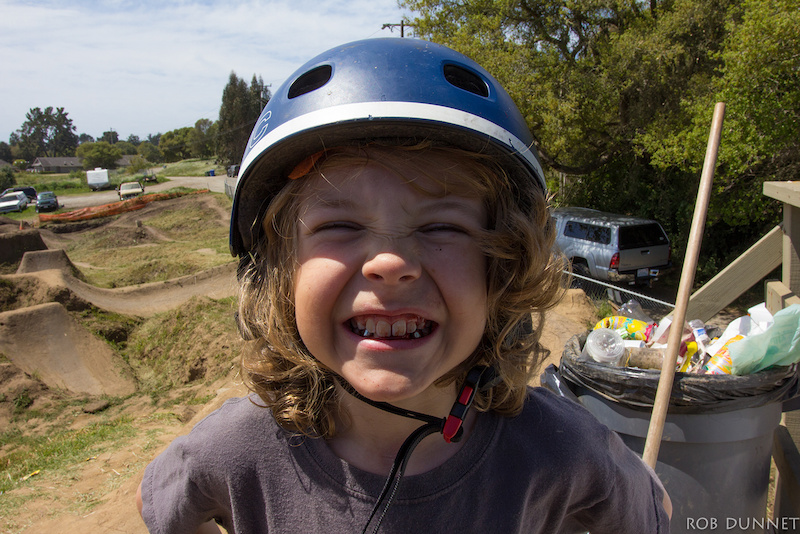 A lot of people have left their blood, sweat and tears in Aptos. Jackson can add his name to that list after biting off a small piece of his tongue. 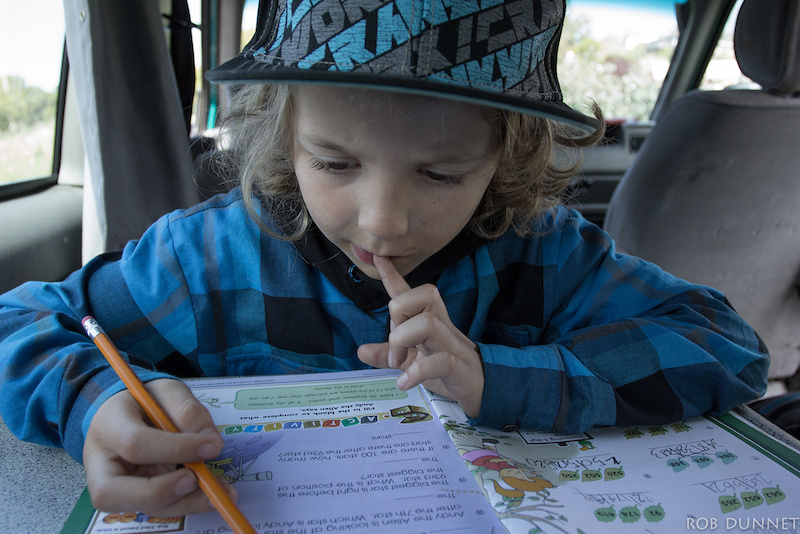 Remember sitting in school on a sunny day and looking out the window at the playground? Watching Jackson do his homework with the Post Office jumps outside the door was a lot like that. 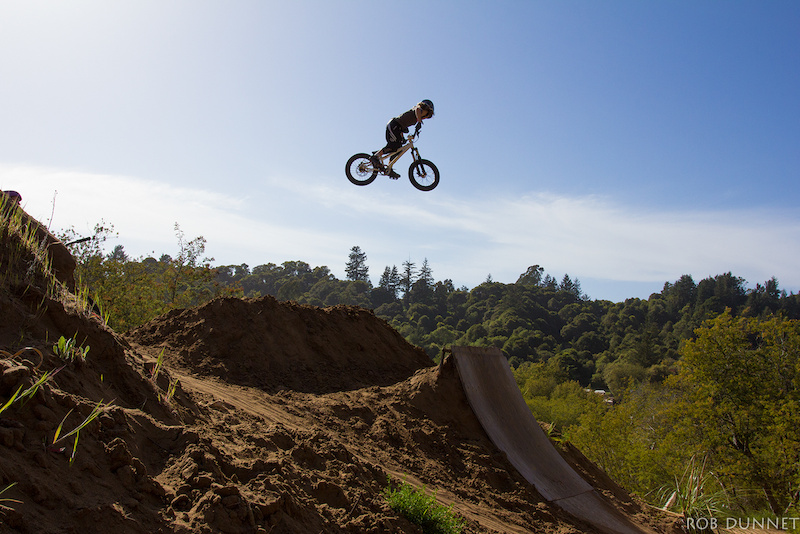 Everyone in Santa Cruz has their own personal spot. There are so many jump spots that we were driving to a new secret place everyday. The Aptos Step Up has been in dozens of videos and Jackson did his best to make it a memorable experience. 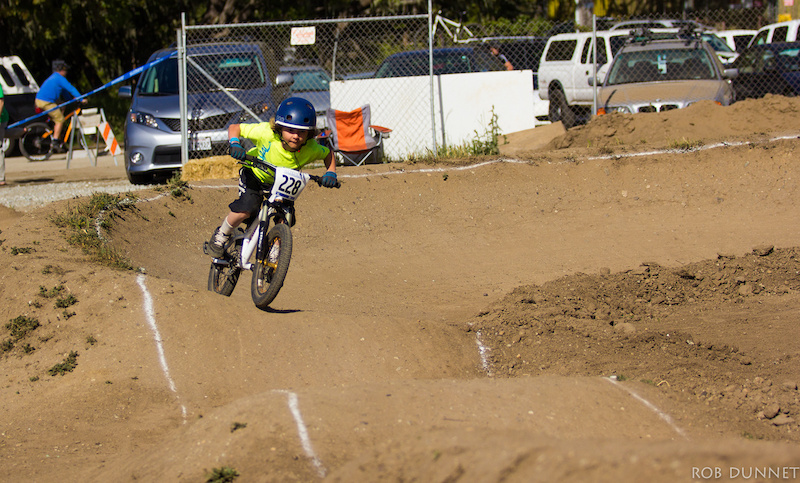 Atpos was not all fun in games Jackson competed in the pump track contest and in the groms dirt jump contest. 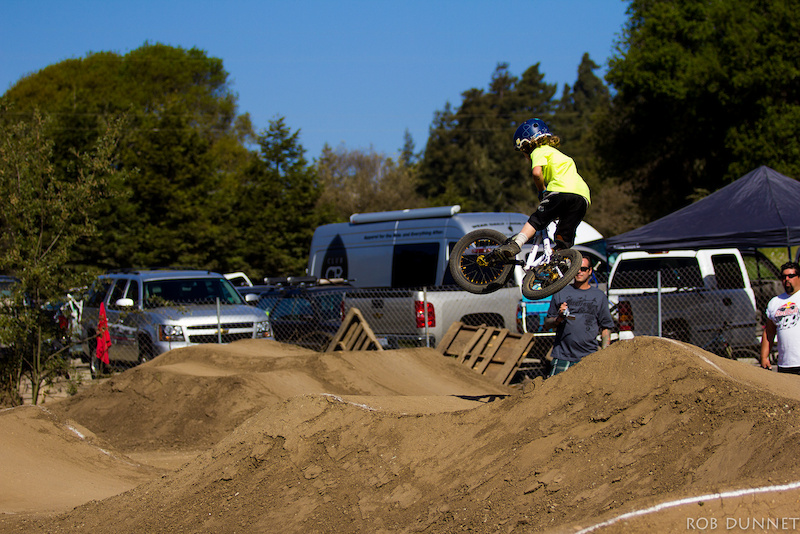 Racing against kids much older than him and on bikes with bigger wheels Jackson had a hard time in the pump track contest. It could also have something to do with jumping as high and with as much style as possible that slowed him down. 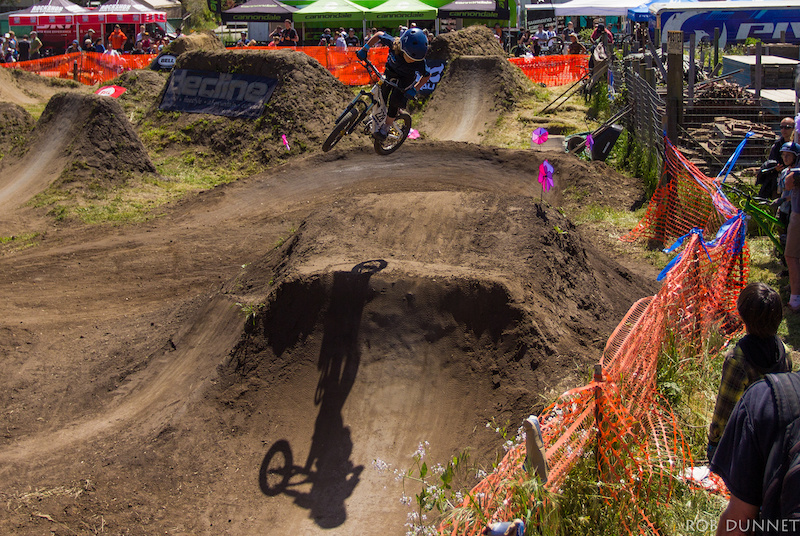 The practice at the Aptos Step Up paid off because Jackson won the dirt jump contest with a clean 360 and a couple of no footers. 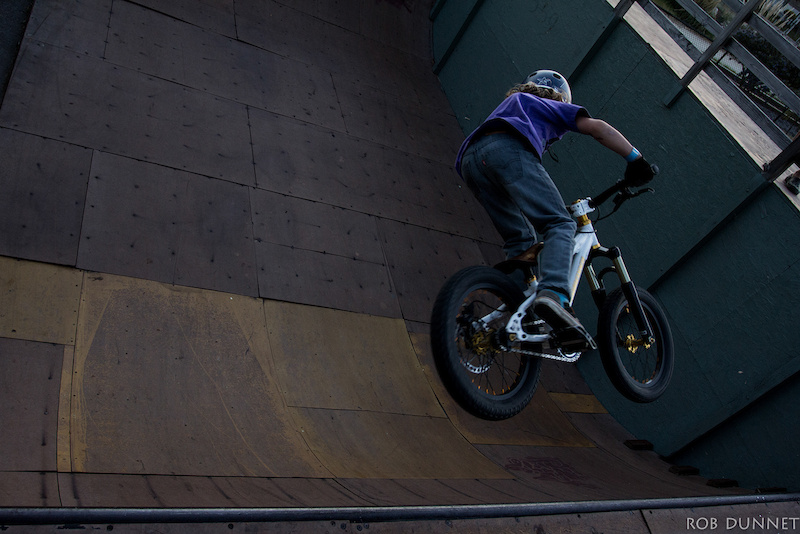 The next week was all fun and games. We rode skate park, rode local jumps and camped out at the Post Office. 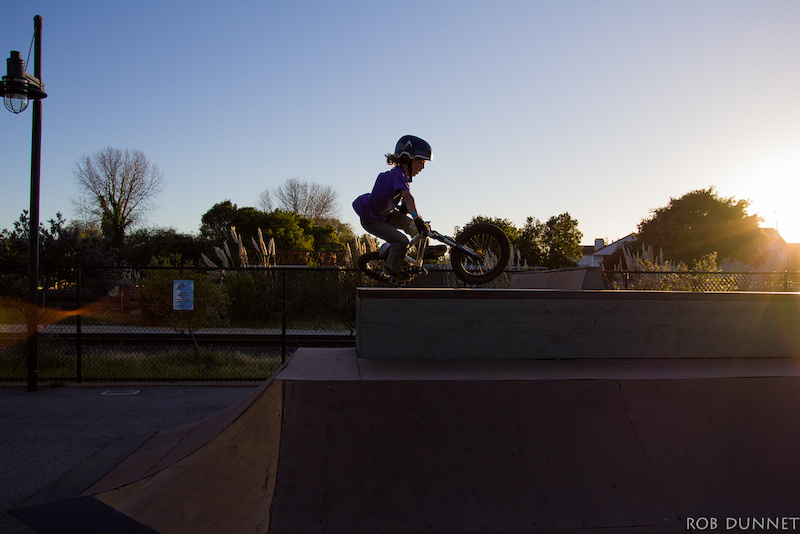 Sunset shoot at Fun Spot in Santa Cruz. Jackson rode all day and then he rode until it got too cold or too dark. 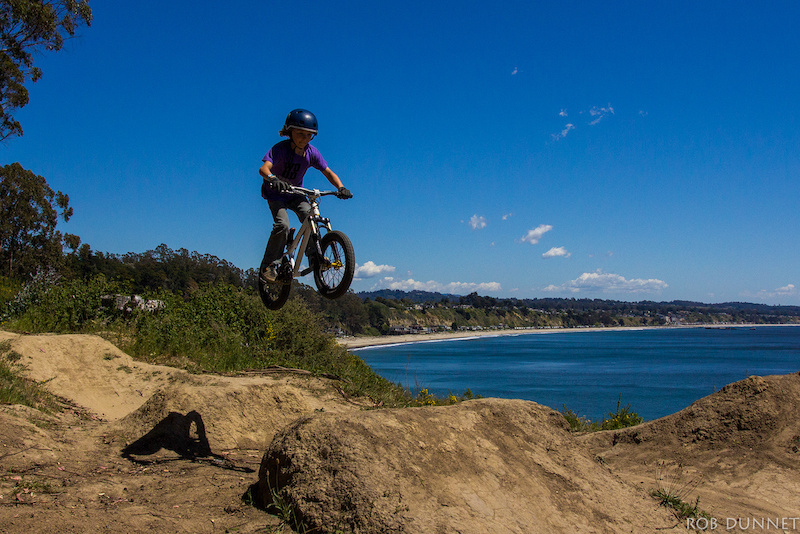 The Cliff jumps have the most amazing backdrop, but the wind made it pretty difficult to ride there. 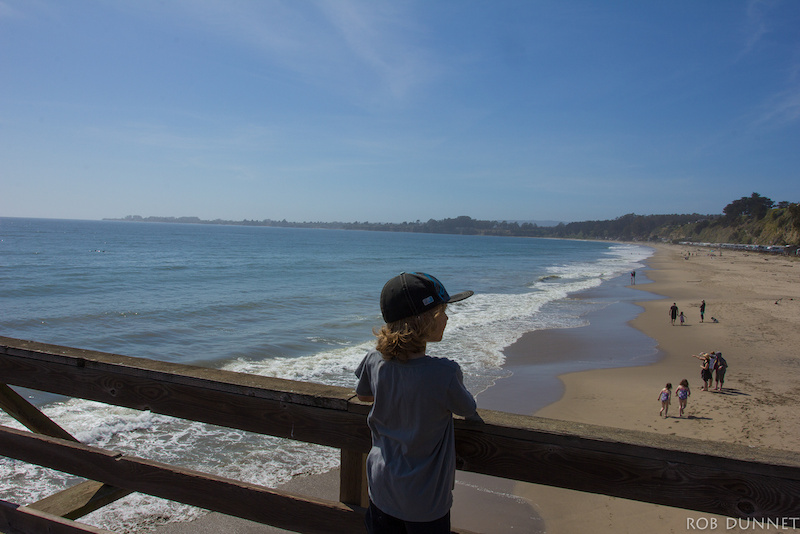 Los Gordos burritos, jumps around every corner and the beach makes Aptos one of my favorite places in California. 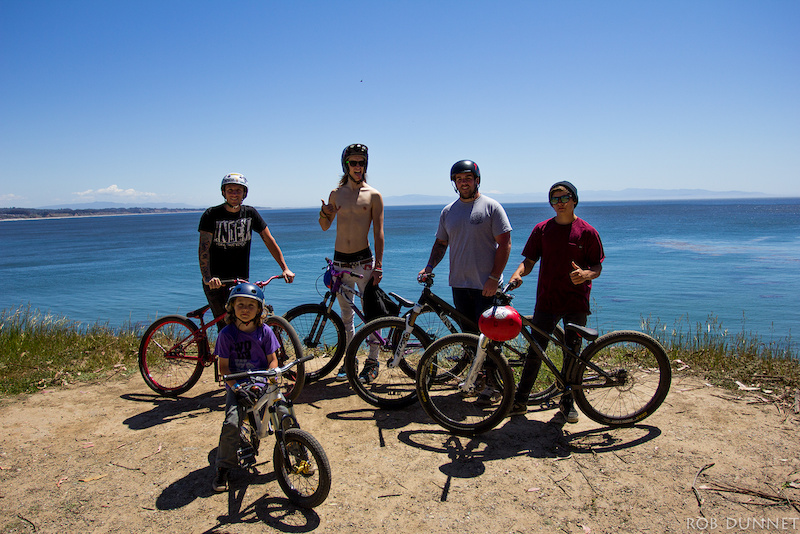 Riding with these guys could make anyone a better rider. 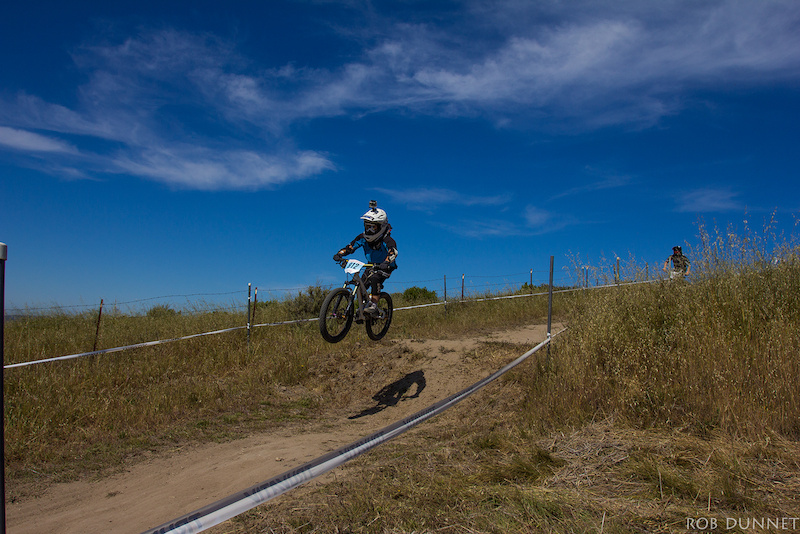 After a week in Aptos we left to hang out in Monterey for the Sea Otter Classic. The heat and the line up made DH practice the longest part of the weekend. 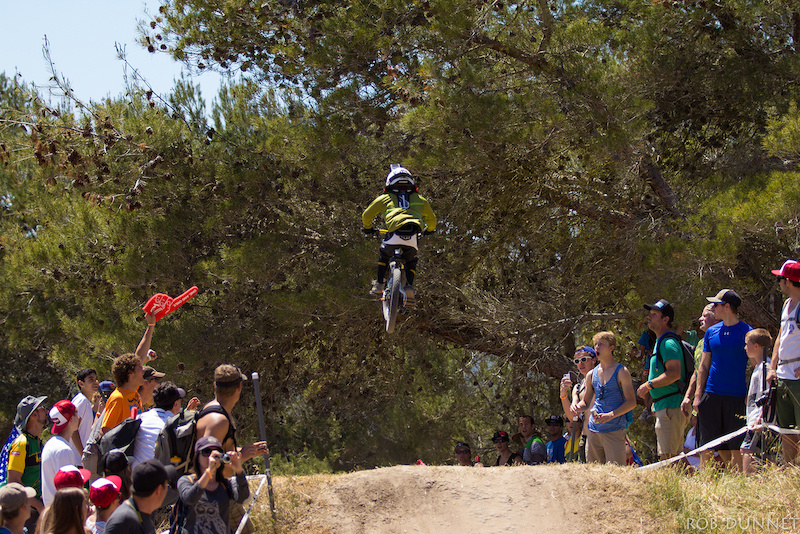 During Jack's race run it was pretty clear that his practice paid off. He was on the gas and making sure he made the tranny on all the jumps. 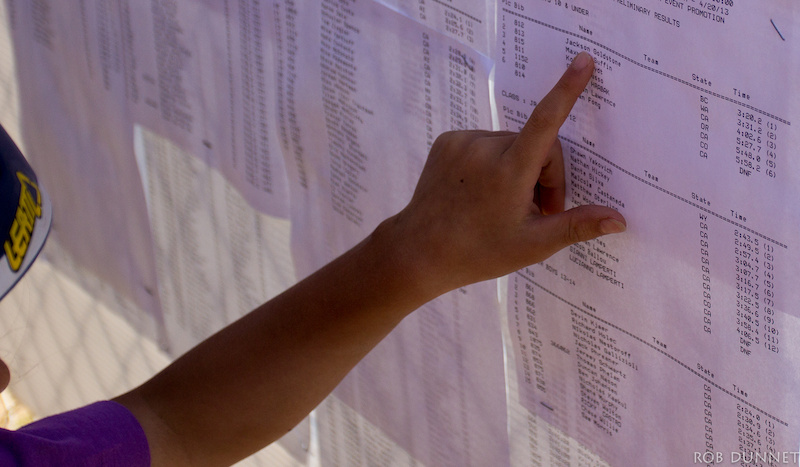 The best part of racing is seeing your name on the top of this list. 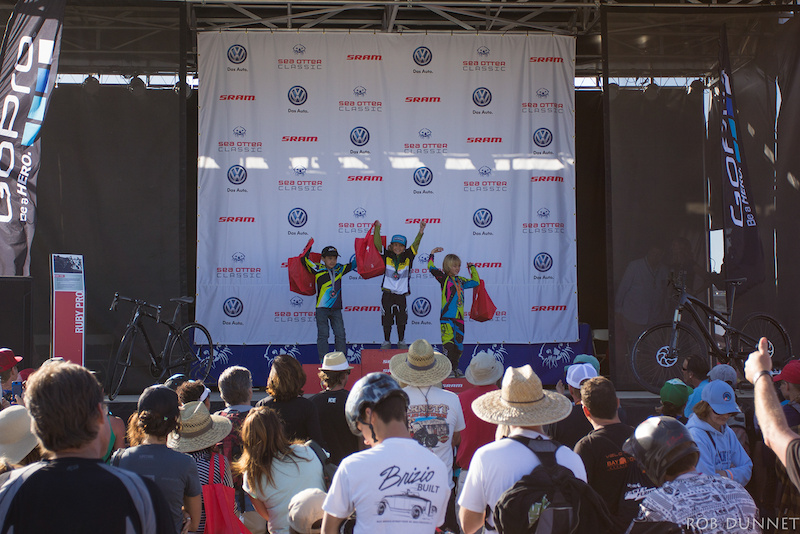 Top step on the podium has its perks; first place medals, winner's jersey and kisses from podium girls.

We would like to thank Mike Redding at Fox and Geoff Rogers at Specialized for taking the time to show us around. We should also thank Jake Kinney from Woodward West for taking such great care of us and everyone in Aptos for the hospitality.

Here is a look back at some videos from Jackson from the past few years:

Jackson would like to thank his sponsors for all of their support, Royal Racing, Kore Components, POC Sports, Leatt, Shimano and Lil Shredder.

Konanemia (Apr 27, 2013 at 11:09)
Here comes the diference in this sport! Someones do it for the rush, but that's only a plus. Real fact is that the fun can be funnier when you have fun

and this kid does

gravelmans (Apr 28, 2013 at 2:28)
Thanks man, didn't think anyone would reply. Wow, just saw the Lil shredder page, OMG the prices are insane, but i bet its a quality bike. Jackson has at least 2 of them.

andrewbikeguide (Apr 28, 2013 at 16:18)
Lil Shredders - only silly money if they are being bought for kids without the skills. The way these kids ride they will destroy a regular 16" or 20" (or worse hurt themselves) in a week.

ldhbaker (Apr 27, 2013 at 0:38)
Hah. He's amazingly good, to be sure. The first "child star" of mountain biking? I sincerely hope he outlasts the child phase, and dominates the mountain bike work in years to come.

will-castaneda (Apr 27, 2013 at 0:13)
I met him at sea otter. He's such a cool little kid and he know how to ride a bike better than every kid his age for sure and better than most older than him. Hes practically a superstar but you wouldn't know it if to met him off the bike.

Shredder-boy (Apr 27, 2013 at 9:10)
How does this kid have such big balls after riding that push along thing in this first video I didn't think he would have any balls left!

mulchee (Apr 27, 2013 at 11:34)
Love Jackson! He's such a nice kid. His dad gave our daughter his old bike to ride, how cool is that! I'd also like to mention that Jackson has a sister who shreds the bike park, such a great sight to see!

home-team (Apr 27, 2013 at 10:25)
The whole family races bmx and ride mountain bikes. When Jackson was really small they got him a run bike and he loved it.

Mishtar (Apr 27, 2013 at 17:22)
Finn is another amazing rider, not sure who is better but Finn is a little older isn't he? Lucky little guy, saw him riding a lot last year with guides. Not sure if his dad does this or not but I know if I managed the WBP I would have a instructor hang with my kid all day everyday!

norton81 (Apr 30, 2013 at 8:44)
I guess you kinda had to know that their is parental influence(not meant in a negative way) for someone so young to have so much sadle time in order for him to be so good! Envious of his early start into riding.

ubcdh (Apr 27, 2013 at 22:36)
I think Jackson's steez is testimony that though hes nine years old he may have put in more hours shredding than many of those on this site complaining that a nine year old has more skills than them

RynoRodrigosouraus (Apr 27, 2013 at 0:34)
Saw this young man perfecting some mean super mans into the bag jump at sea otter. Get it!

SamAkacsos (Apr 27, 2013 at 13:13)
its sick that the pink bike community can watch this kid progress and grow up. hes a huge role model for me and alot of other people. keep shredding jackson!