Dec 17, 2012 at 22:53
by Rob Dunnet
Tweet
I have been places that if it wasn't for my love of bicycles I never would have visited. Mount Bromo in Indonesia is one such place. Bromo is an active volcano that last erupted in January of 2011, and I had never heard about it until Wednesday.

I arrived in Surabaya, Indonesia on Friday evening to visit the Polygon factory nearby. Several of the one thousand employees there are avid riders and they had planned a once a year trip to Bromo on Sunday. After a factory tour on Saturday I treated myself to an early Christmas present. 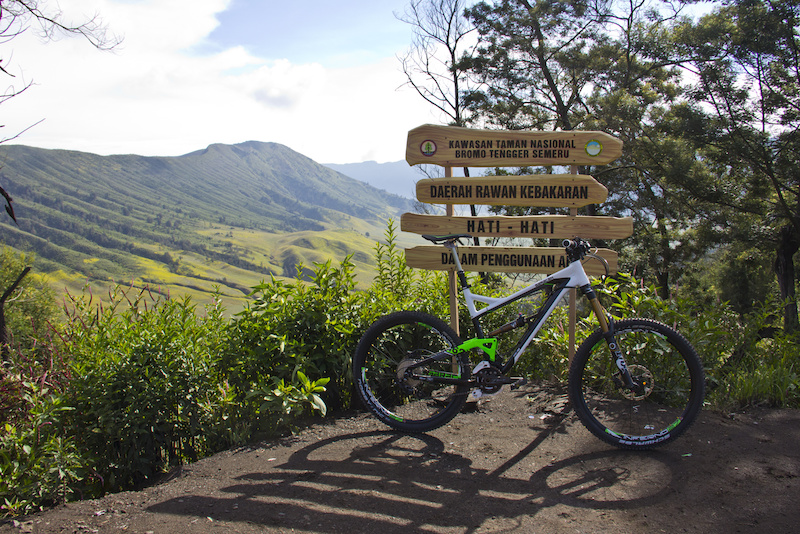 The factory that produces Polygon does some assembly for Saracen; I found a 2013 Ariel 162 and made it my own.

On Saturday night in the cover of darkness we made our way to the village of Cemoro Lawang. We had no idea what the view would look like when we awoke and we were not disappointed. 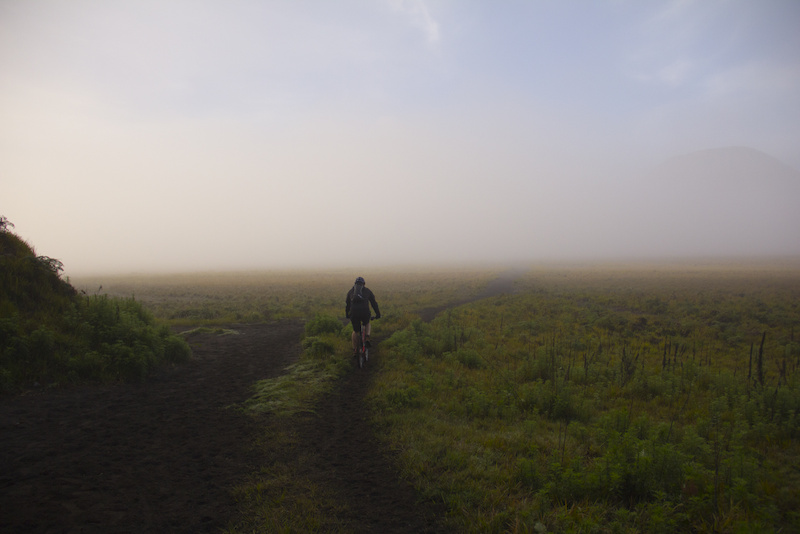 There are more active volcanoes in East Java than anywhere else in Indonesia. The early morning fog made things more dramatic but as we started riding I just wanted it to burn off so that the view could be appreciated.

Bromo sits inside the crater of a massive volcano, which is still active. To reach Bromo, tourists travel across a Sea of Sand to the edge of the volcano by foot, jeep or horse. During the rainy season the sand is hard enough that you are able to ride across on bikes. 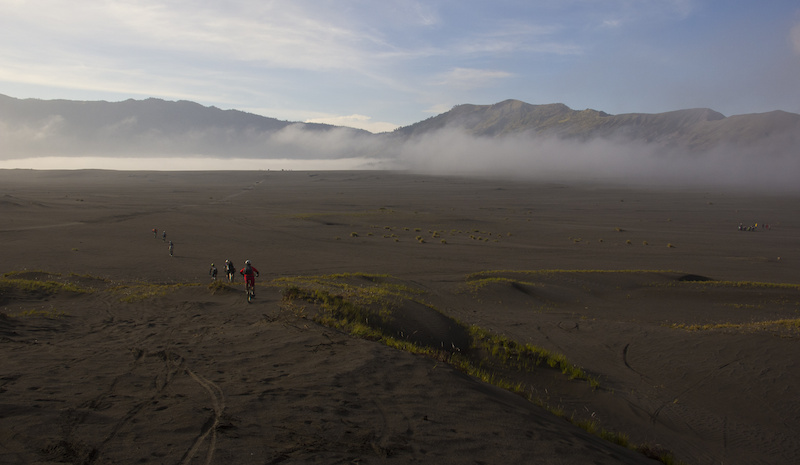 Riding across the Sea of Sand, it may not look like it but this is actually inside an active volcano. 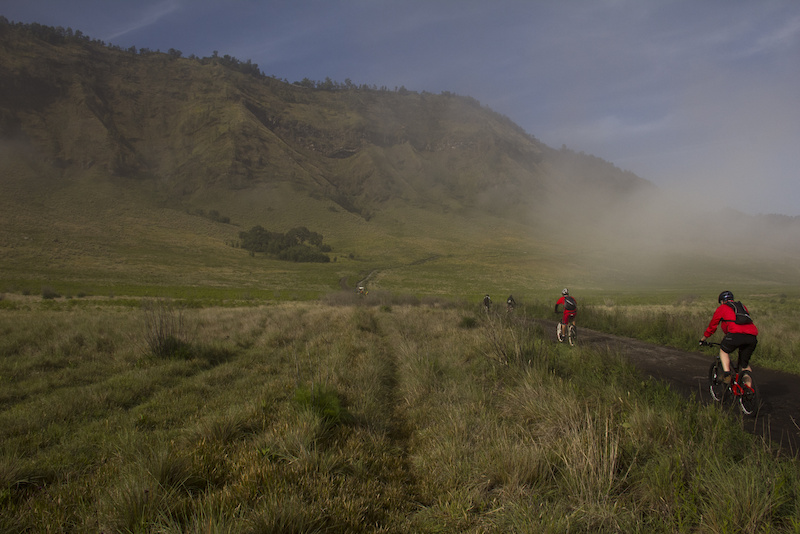 As we got closer to the volcano walls, sand tracks turned into jeep tracks.

The change in scenery was amazing, we went from riding in a sand dune to riding in a valley meadow surrounded by the walls of a volcano. 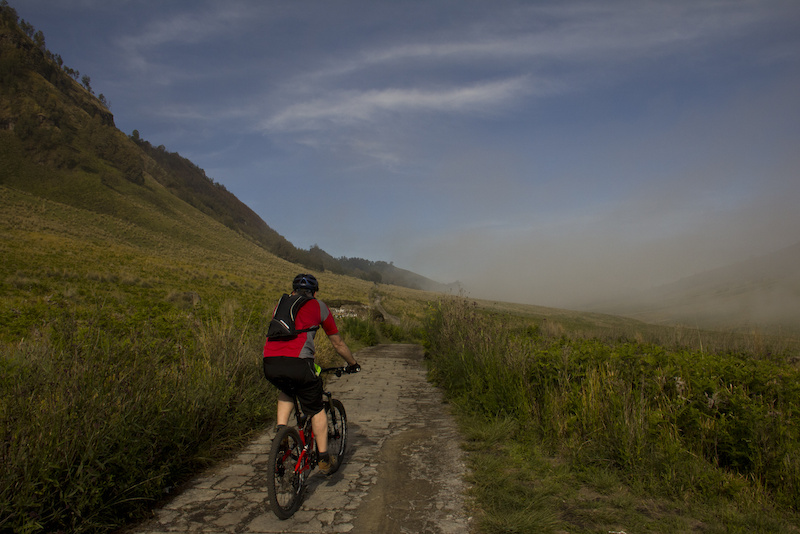 Starting the climb up a cobblestone road.

After climbing for an hour we arrived at the top of the first of several climbs. The climb was not difficult and the view from our first stop was well worth the time and energy spent. It is also possible to make the trip by foot or motorcycle, but being able to enjoy the scenery at the speed of a good pedal was more than anyone could ask for. 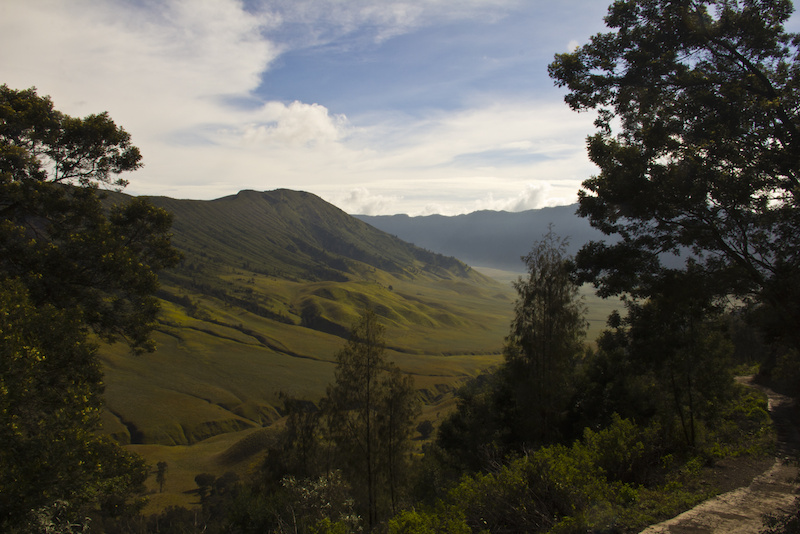 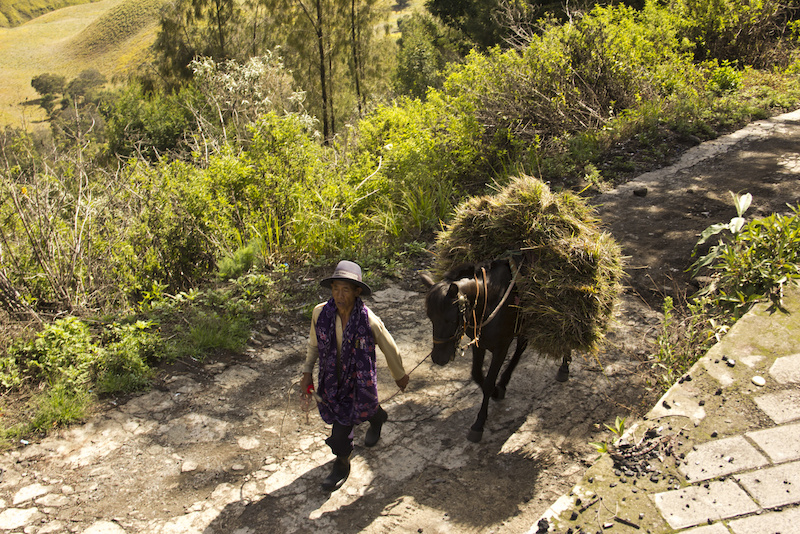 The first descent was on what was probably once a mountain road but over time has evolved into a fast flowing section of singletrack. With the amazing view it was difficult to keep the trail as the main focus. I was constantly looking for photo opportunities and I paid the price by catching a pedal while in a rut and going over the bars. I got my first taste of Bromo dirt and I suggest that everyone try it. 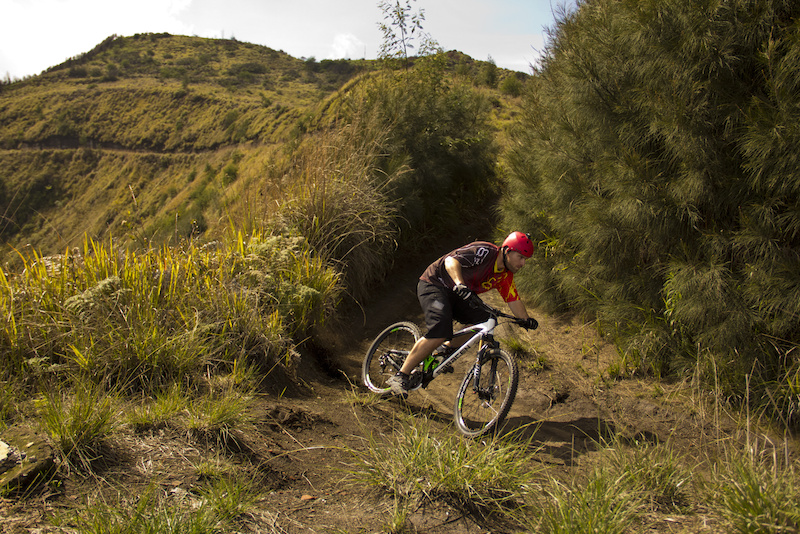 Getting loose is always the best way to travel.

There are only two seasons in Indonesia and the rainy season is from November to March. There was rain in the weather forecast and we did our best to stay ahead of it. 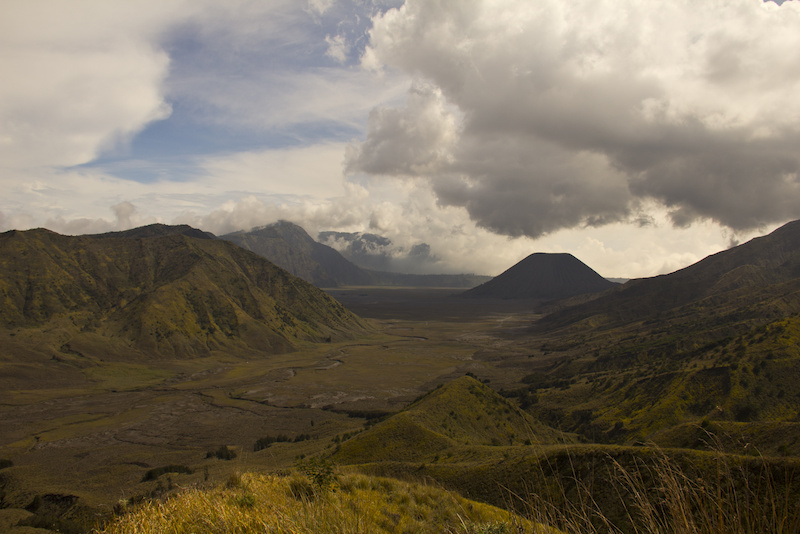 The rainy season threatened us at every turn. 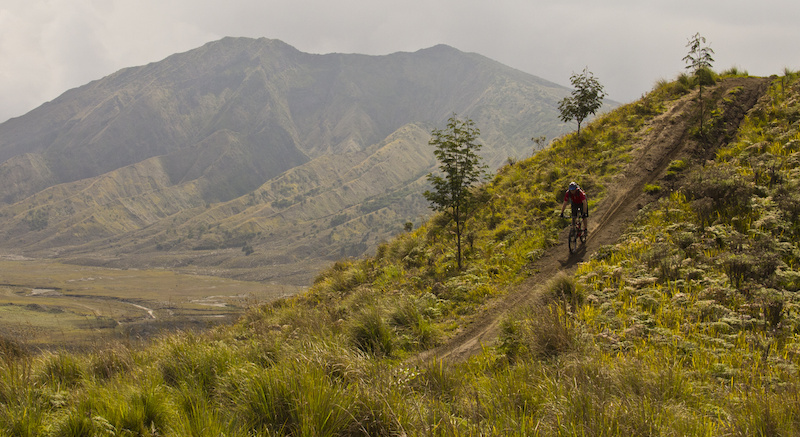 The man responsible for most of Saracen's bike designs; Ryan Carroll enjoying the singletrack and the scenery. 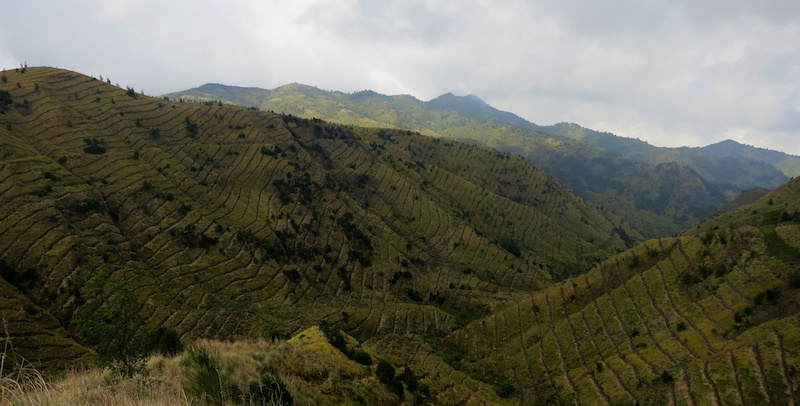 At the top of the mountain there were lines cut into the grass. The Indonesians called it angel's finger prints and told me that they are naturally made.

Once we got to the other side of the mountain range the landscape began to change, and the further we got down the mountain the more life we started to see. First it was the sounds of life coming from small farm houses, then it was children saying hello and waving to us as we passed through mountain villages. 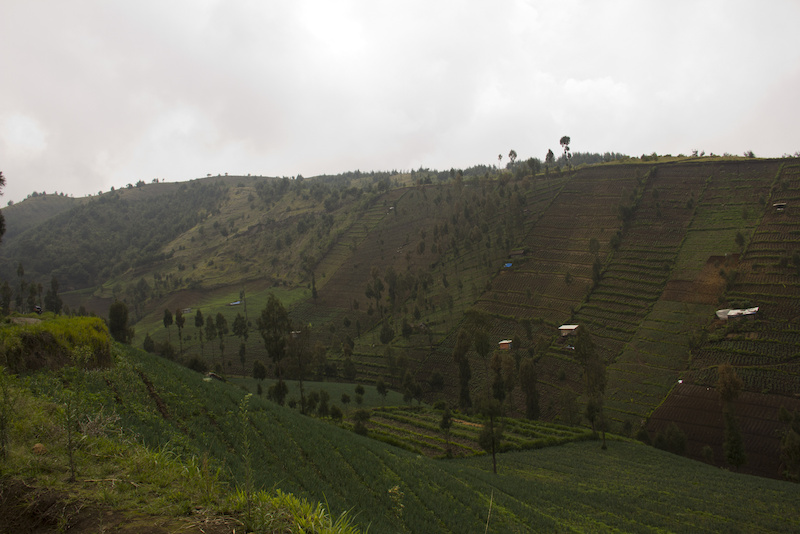 Farm houses line the mountain slopes in a farming community. 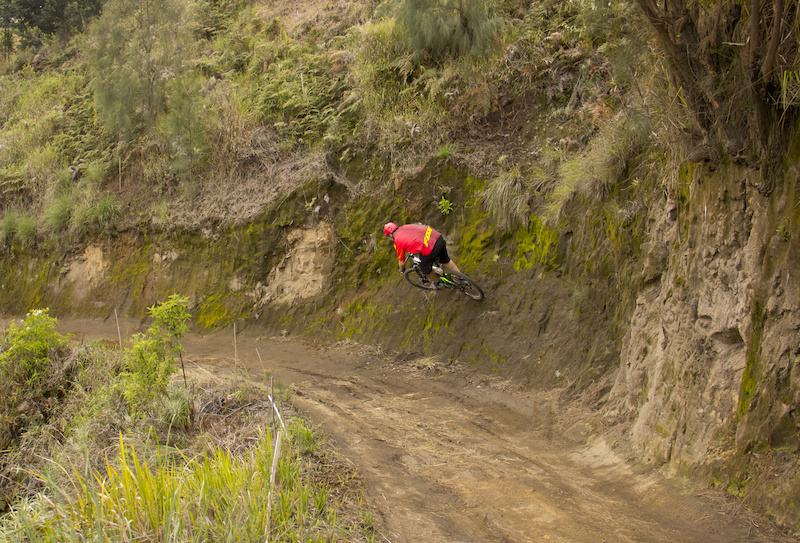 Natural wall rides all the way down the road. Stuck this one, crashed on the next.

From village to village we traveled by the footpaths that farmers use to get from their farms to the villages. The trails were primitive in some places and in other places it was fast, buff singletrack. 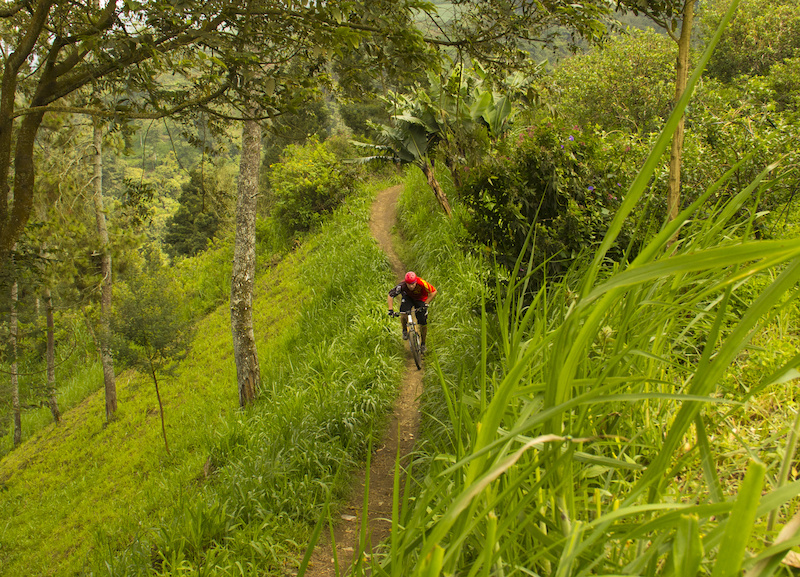 Jungle singletrack was the road most traveled. 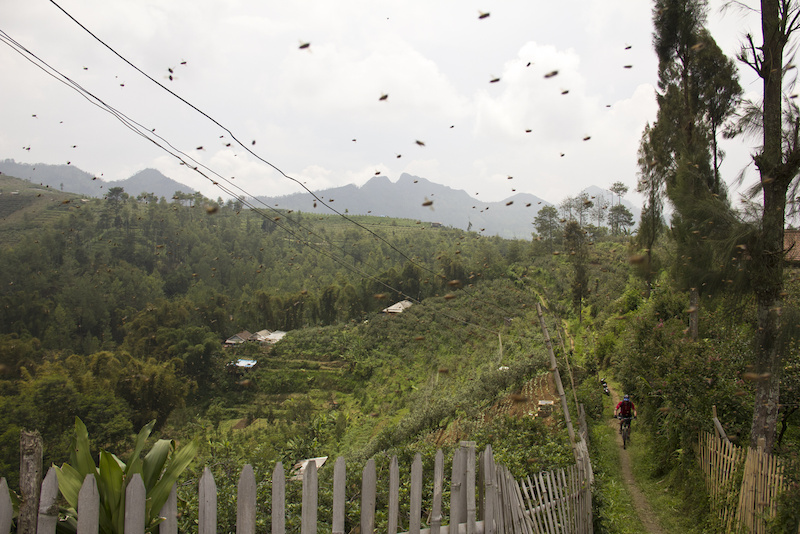 Sometimes you get the shot and sometimes a swarm of bees ruins it.

After traveling 40 to 50 kilometers and with 12 more to ride the rain finally caught up with us. The downpour was torrential and it turned the trail into a river in a lot of places. That last section of trail might have been the best but it was hard to enjoy it. The trail flowed through rubber plantations and bamboo forests.

I can not thank the people at Polygon Bikes enough. This ride was an amazing experience and I will never forget it. It was so good that I might have to make the yearly trip with the Polygon employees. I would also like to thank Simon and Ryan from Saracen Bikes for leaving such a nice bike unattended.

If you find yourself in Indonesia with or without a bike Mount Bromo is worth the trip,

GTImkIV (Dec 23, 2012 at 2:01)
I will be unable to attend your country. I follow a strict no Bee Swarm policy in all of prospective Mountain Bike ride locations. Thank you, that is all. Sincerely, ABSMBA

.
great article and pictures, thanks for showing a piece of beauty of Indonesia, Rob.

hope I will be ride there again

grizzem (Dec 23, 2012 at 10:18)
I grew up in Jakarta, mount Bromo is my old stomping ground, what a place! HATI-HATI (Translation= "careful") Selamat Datang di Indonesia!

MusliminDamanhuri (Feb 7, 2013 at 0:51)
We had the same ride at Bromo last year but in Dry Season. You can notify differences in weather, landscape, and sky in the same track of Mount Bromo in the following link:
www.landscapeindonesia.com/download/ebook/291-epic-volcano-riding-chapter-2-bromo

There are some e-books available to download for free...

MusliminDamanhuri (Feb 7, 2013 at 0:58)
You can download beautiful pictures of our bike trips in bromo from here www.scribd.com/doc/69932088/Epic-Volcano-Riding-chapter-2-medium-quality

MusliminDamanhuri (Feb 7, 2013 at 0:48)
We had the same ride at Bromo last year but in Dry Season. You can notify differences in weather, landscape, and sky in the same track of Mount Bromo in the following link:
www.landscapeindonesia.com/download/ebook/291-epic-volcano-riding-chapter-2-bromo

There are some e-books available to download for free...

Wesselized (Dec 23, 2012 at 9:57)
Just watched a documentary about Java, actually showed the Bromo vulcano on sunrise, looked so amazing. Deffinetly on my to do list!

willycpc (Jan 18, 2014 at 23:20)
Wow - my Mom grew up in Bandung, Dad in Surabaya. Visited the tea plantation she grew up on, but had no idea that they had MTB trails there! Thanks for the info - would love to go back!

dfnugraha (Dec 23, 2012 at 23:57)
One of the Amazing place in indonesia, there are still many outstanding places in our country, MTB paradise ...

I'll ask him on his FB page hehehee.

home-team Plus (Dec 23, 2012 at 3:53)
no, Polygon does some assembly and painting for Saracen, their frames are produced in other countries.