Jan 17, 2012 at 0:35
by Rob Dunnet
Tweet
In the past I have had the opportunity to travel by bike in South East Asia. I found that I spent more time riding to the destination than enjoying the riding once I got there. I told myself if I ever had the chance to do it again I would do it a lot differently. Instead of touring I would travel from place to place with my bike and then enjoy the riding once I got there. I was itching to go on a bike trip when Simon from Saracen told me that there was a bike park in Kuala Lumpur, Malaysia. I could not find much information about riding in Malaysia online, so I contacted Nick Ong (the Chief) from the Fakawi Tribe. Fakawi is one of the first Extreme Mountain Bike Race teams in Malaysia. 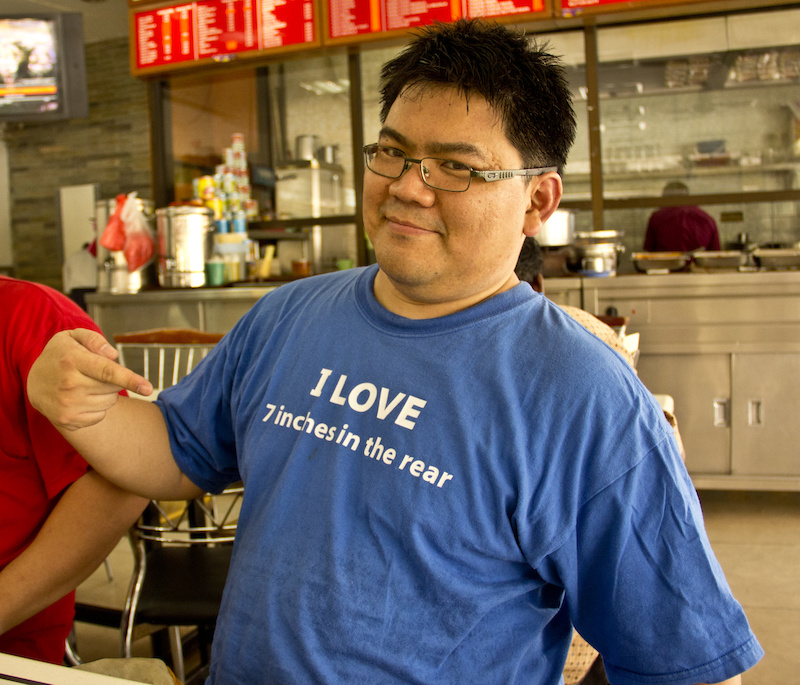 I arrived in Kuala Lumpur on Monday evening and contacted the Chief - he said that we would spend a day riding the XC trails found at Kiara; a network of trails that can be found in the middle of a metropolitan city. The plot of land that they call Kiara has recently been reclaimed by the parks or forestry department so this trail system has been saved from the expansion of the city.

Chief earning his downhill by riding up.

If I had to categorize the trails there I would have to call them cross country. The uphill was a series of mellow switch backs with the occasional uphill grunt. The downhill had flow and could be ridden at speed and has been used to hold down hill races in KL. From what the locals were telling me there is somewhere between 40 and 60 kilometers of single track trail and could be ridden in a day or two. But once the noon day heat hits you'll likely opted to sit in a local cafe over riding in the heat and humidity. 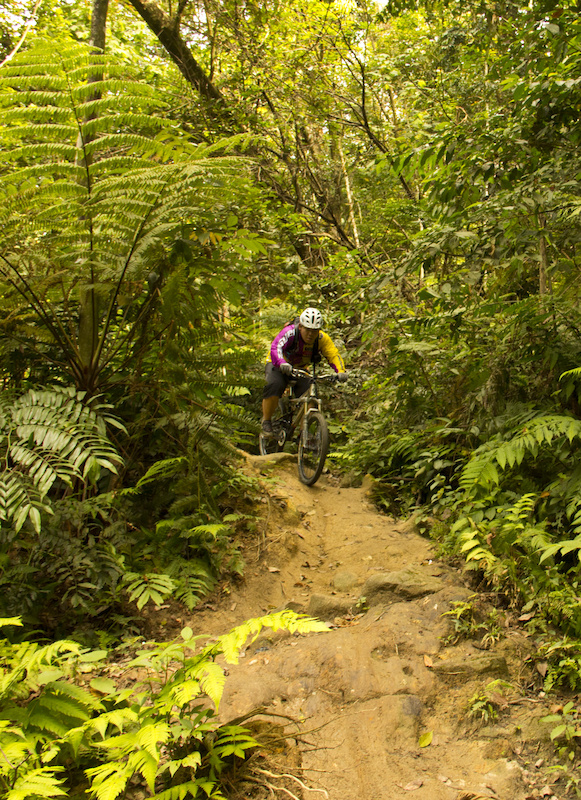 Yish getting ready to drop into a DH section.
Tuesday morning Rizal (Fakawi Team Manager and the President of the Malaysia DH Race Series) picked me up at my hotel and after eating lunch served on a banana leaf we drove down to Putrajaya Challenge Park (PCP). 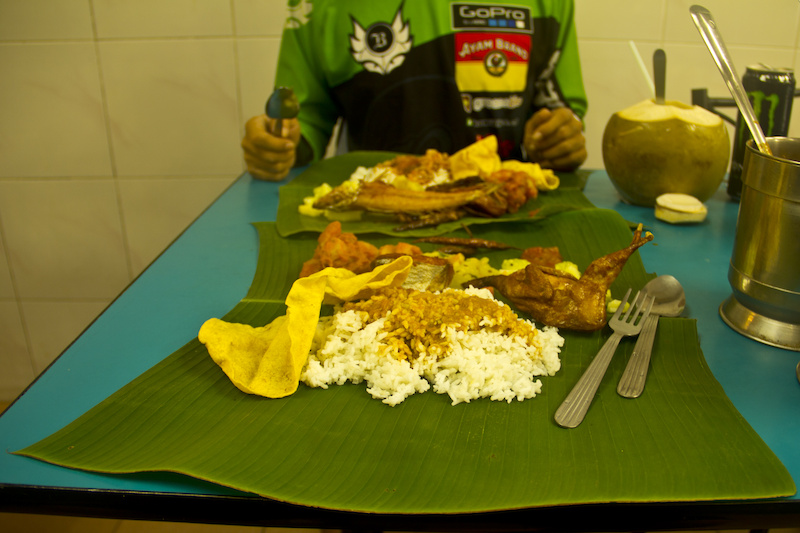 Indian food served on a banana leaf, the food in Malaysia is amazing.

Located near the international airport PCP was designed and constructed by Diddie Schneider (designed the Winterberg trails) and from what I understand it is open all day and is free to ride. Located within minutes of the city it has pretty much everything you could ask for in a bike park. Dirt jumps, pump track, XC trails, DH trails, skate park, climbing wall … I could have spent my whole trip just riding the jumps and trails at PCP. 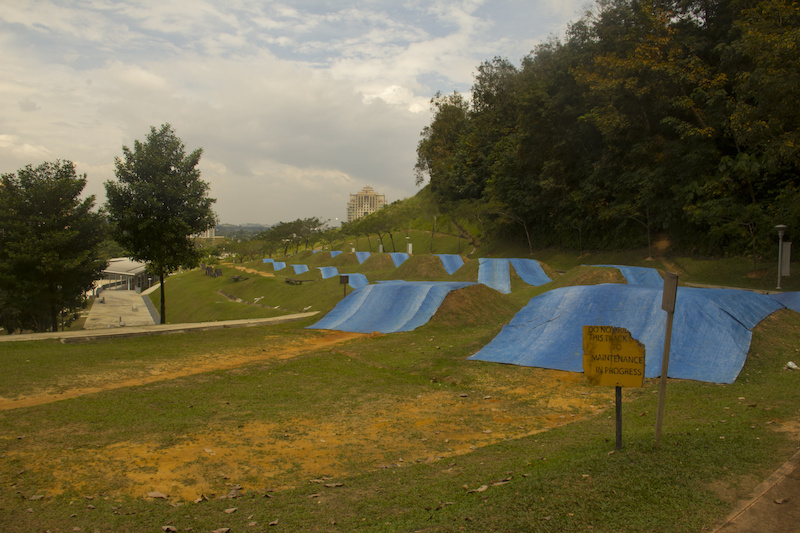 Concrete park for skateboards and bikes.

Our jump season was cut short by rain clouds that forced us to tarp the jumps. The rain never came and instead of uncovering the jumps again we sessioned the pump track and then did a couple of laps on the downhill race trails. Here is a short clip of the PCP Pump Track:

On Wednesday morning I traveled north to Penang with Fakawi racer Aaron. He and teammate Adam are training to go to New Zealand to race, so I tagged along for three days of DH riding. Adam lives at the top of Penang hill and has easy access to some of the best DH trails in Malaysia. 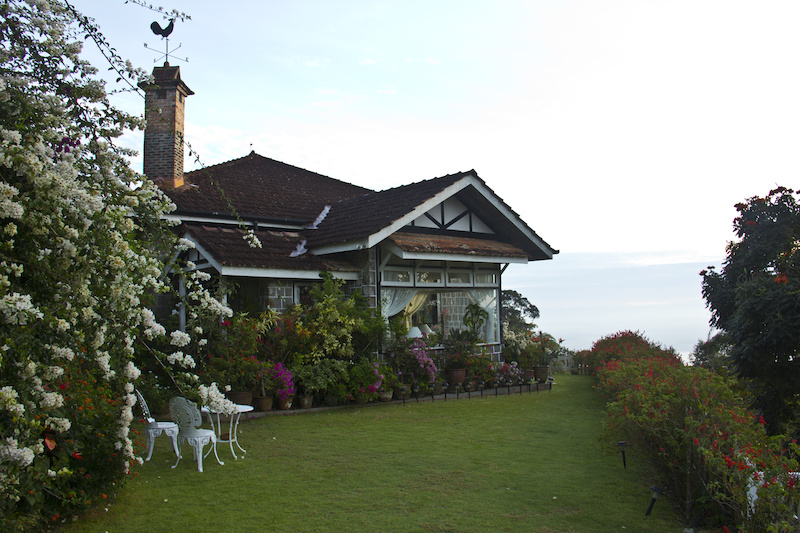 Adam's house on the top of Penang Hill, not a bad place to stay on a riding vacation.

The view of Penang from the house was amazing.

The trails on Penang Hill are some of the steepest that I have ever ridden. The steep terrain, tight corners and millions of roots made for run after run of fast technical single track. The short traverses between down hill sections were a welcome rest after taking a pounding from the roots on my borrowed 5" trail bike. If making a visit to Penang hill you will definitely want a bike with some suspension and with good brakes. 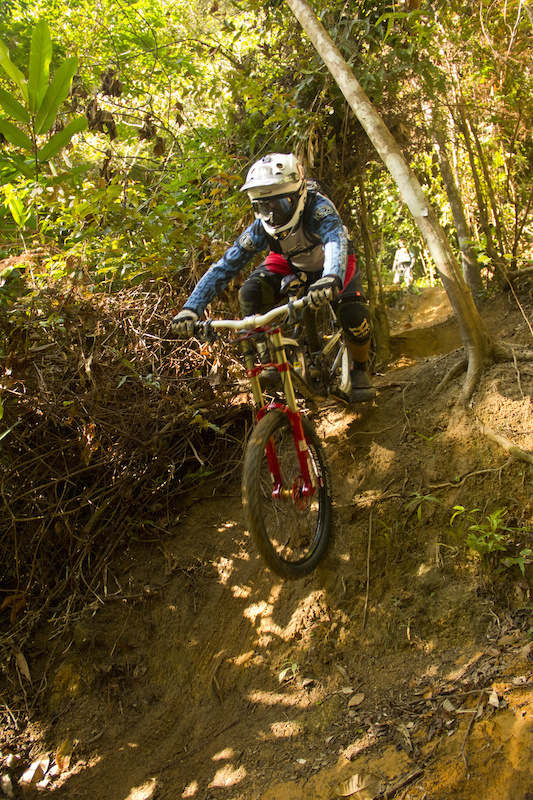 Steep DH section through the Malaysian Jungle.
We also rode a trail called Erskine which is a series of berms and jumps, it is a nice afternoon ride for after Penang Hill. The locals can be found here on the weekends pushing their bikes up and doing run after run on this fun, fast trail. There is a bit of pedalling between the downhill sections, so it is a bit of a work out. 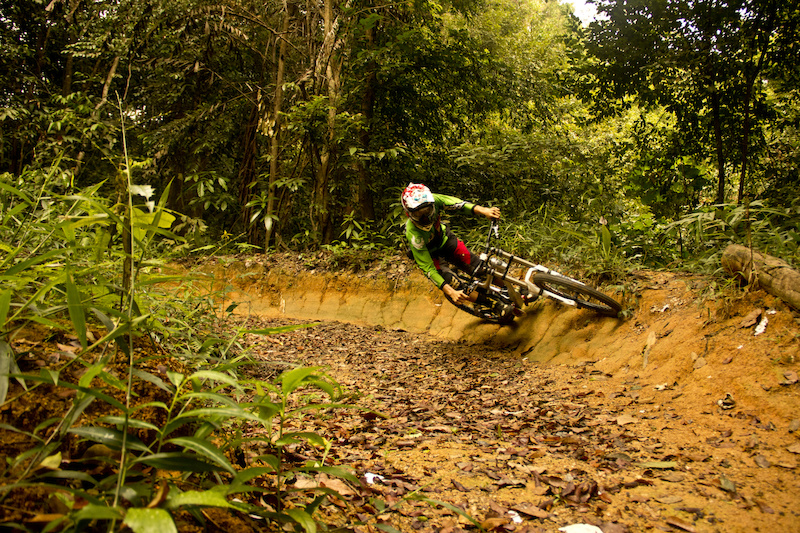 Aaron getting low through one of the many berms on Erskine.

If you find yourself in Penang and need some parts or some maintenance done head to Cyclon Cycle Ind. (CCI) they have a wide selection of high end parts and the right attitude. 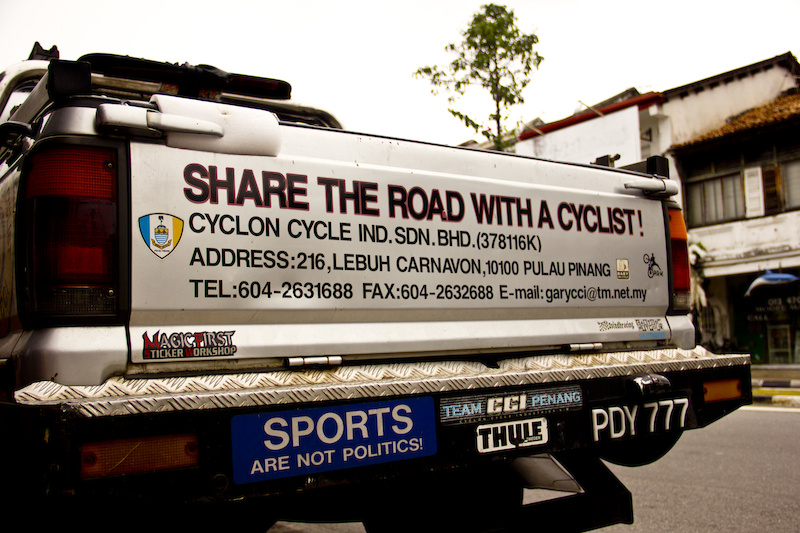 Share the road with a Cyclist and Sports are not Politics!, enough said.

Malaysia was a treat for sure, the food was amazing, the trails are possibly the best I have ridden in Asia and I made new friends every time I got on my bike. There is riding for every kind of rider at every ability level. My only regret is that I should have brought my Saracen Ariel instead of my Amplitude. 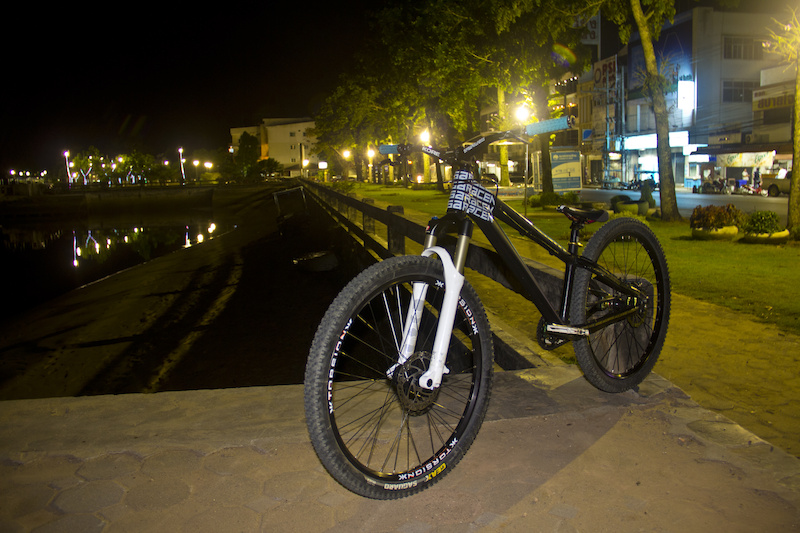 My Amplitude was a good choice for the trails in KL, but it was no match for Penang Hill.

For the trails in Penang I had to borrow a bike and it is always a challenge to ride a new bike on such technical trails. If you are planning to ride in KL only I would suggest a hard tail or 4X bike with front brakes and a rear derailleur, that way you can ride the trails in Kaira and ride PCP. If you are going to ride in Penang only I would suggest a DH bike in good working condition, a full face helmet and some armor. If you plan on riding in both KL and Penang a 6" bike that is on the freeride side of things would definitely make things more enjoyable.

I have a lot of GoPro footage from my time in Kuala Lumpur, so I put together this random mash up that shows what the trails are like at Kiara and PCP.

If you are heading to Malaysia and want to bring your bike check out www.fakawitribe.com and send the Chief a message. They are more than happy to point people in the right direction and there is a good chance he will organize a Kiara group ride for you. My trip would not have been possible with out Ollie at Kore and Simon at Saracen. I would have been lost without the help of the Chief, Rizal, Adam, Aaron and Derek. Thanks to all of you.

For more information on racing and riding in Malaysia go to:

The guys in Malaysia spoke highly of the riding in Indonesia, so maybe I have my next riding destination picked out now.

ak47prince (Feb 5, 2012 at 1:33)
I'm from malaysia too.. The mountaneous area on the way to gunung ledang ,they chop off all the trees and replanted with palm oil trees,so it reveales all the winding tracks and when dust came,the hill turned to golden color just like in that vid'' when the trail ends'..

mrkamot (Feb 5, 2012 at 3:46)
i wish we had those in the philippines. undoubtedly, malaysia is way ahead of the philippines in terms of dh / mtb. what made your dh/races/xc/mtb programs so successful? no politics, wealthy and private investors and willing volunteers?

Squidifier (Feb 5, 2012 at 5:14)
Definitely. There are crazy amount of riders over here in the Philippines, and definitely no shortage of bike shops... Or wealthy riders. It's just about bringing all those together, as well as some work on the tracks to make them better!

mountguitars (Feb 5, 2012 at 10:43)
no doubt that the philippines has great riders and awesome bike shops. its just that we don't have MTB facilities like what malaysia or even indonesia has. just pisses me off we don't have a bike park back home. not a single one.

Squidifier (Feb 6, 2012 at 5:21)
Bathala Bike Park is looking really groundbreaking... The problem is that not many people need to find out about it. Nuvali, Santa Rosa is also helping a lot to make mountain biking more accessible to the average person, as well as the serious riders.

bashweb (May 29, 2012 at 21:26)
Saddly, look what's happening to Bukit Kiara... We have been writing a few articles about Bukit Kiara recently and what is going to be the destruction of the last green lung of Kuala Lumpur. Thanks to Scott Roberts’ post The Great Wall Of Bukit Kiara - An Update As Of 08 May 2012, we see more and more people raising their concern for Bukit Kiara.

ken4ord (Feb 5, 2012 at 5:01)
Thanks for the write up, I am just a quick flight away and sometime I go to Singapore now Malaysia is definitely on the radar. Especially with parks and DH riding, I can't wait to go.

DoisforDonuts (Feb 5, 2012 at 14:41)
Thank you for this article! Always struggled with finding information on mtb-ing in Malaysia. Can't wait to balik kampung and ride now.

redride (Feb 5, 2012 at 7:55)
Goonrider. The team just arrived in Taupo. Should be riding rotorua next few days

home-team Plus (Feb 5, 2012 at 2:37)
the video is from the trails in Kuala Lumpur only, the trails that we rode were not super technical. the riding in Penang is a lot different, but I did not get any video while riding there.