Nov 25, 2013 at 19:58
by Rob Dunnet
Tweet
At Interbike Martin the owner of KS asked if I would want to spend a month in China before their annual race to make some changes and give them input on their race courses. I attended the event two years ago and knew that due to the location and the way the courses were built that it would be difficult to change. I arrived roughly a month before the event and took up residence in their factory dormitory. In the month that I was in Shenzhen I got to know several of the people that work for KS and for several I was the wai guo ren (foreigner) that they would see shovelling with the other workers. A wai guo ren is not something the people at the KS factory see everyday, a foreigner with his shirt off and with a shovel in his hands is like seeing a unicorn at the end of a rainbow. So for a month I was conversation for some and friend to others.

Everyone and everything that enters the factory has to be accounted for. There is a gate at the main entrance of the factory and several guards work in the gate house. Like everyone else I had to enter and exit from this gate. I quickly made friends with Roger, a 24 year old guard who speaks a little bit of English. 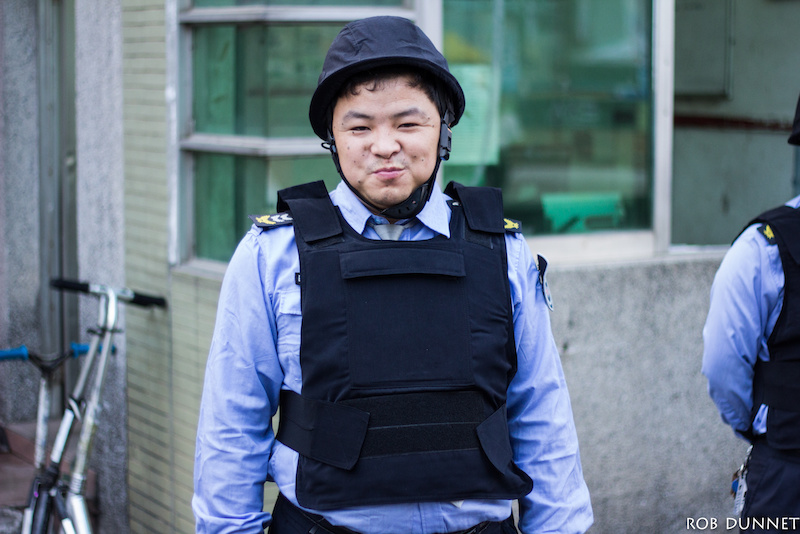 Expecting over a thousand people the guard staff at the KS factory was in full riot gear. Roger told me that his vest would not stop a bullet but that it would stop a knife attack. He would not let me test to see if either were true.

To make changes to the four cross course I had to move a couple of truck loads of dirt. The dirt arrived after dark and when I got up in the morning the dirt was in the place that I had marked on the track. I guessed that dirt fairies had moved the dirt while I was sleeping but it was actually three KS employees who look after the garden and fix things in and around the factory. I got to work with and talk to these guys a lot over the month and they gave me a lot of insight into the life of a Chinese labourer. 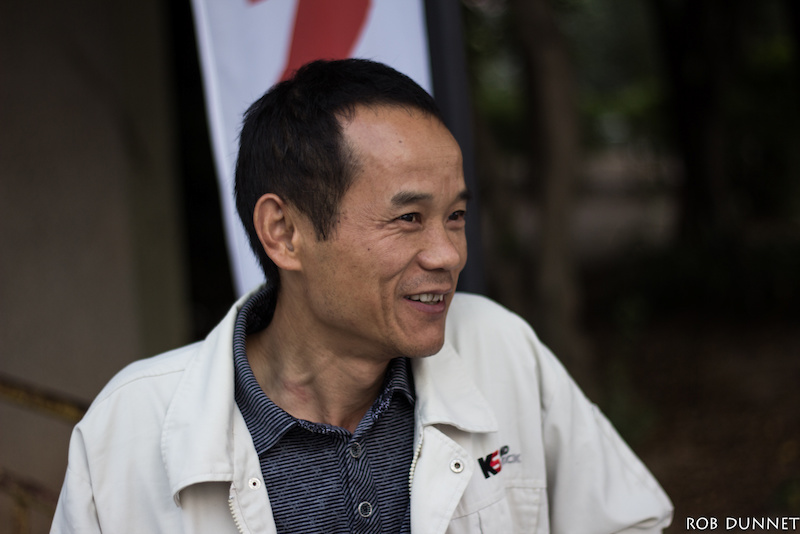 I got to take part in making this years race take shape. I got to know many of the people that were involved behind the scenes. Many working from 8am until 10pm to make sure everything was ready for Sunday morning.

Last year's event was plagued by rain and the fear of rain was on the back of my mind. The week up to the race it had been raining in the morning and then sunny and hot the rest of the day. The forecast showed sun on Sunday but when I awoke to wet streets that fear crept back into my mind. 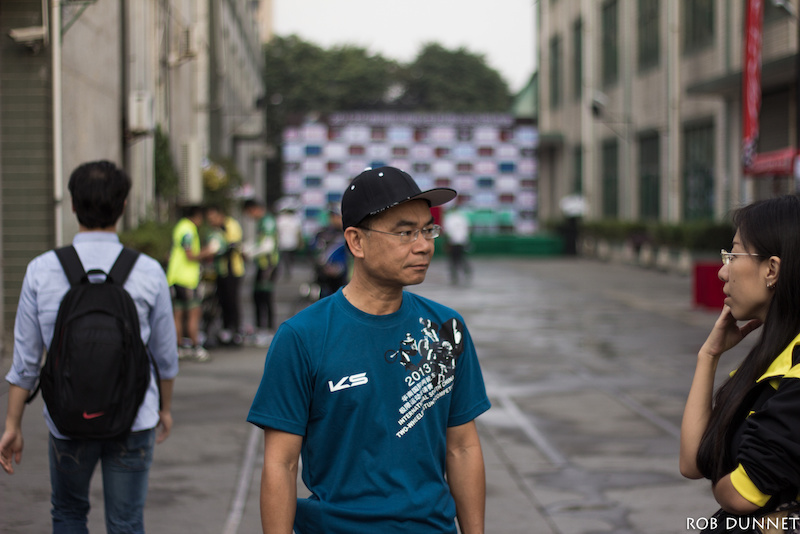 Martin was wandering around before 8am talking bikes. I wonder if he was worried about the weather of if he was concentrated on the competition ahead and the party to follow. 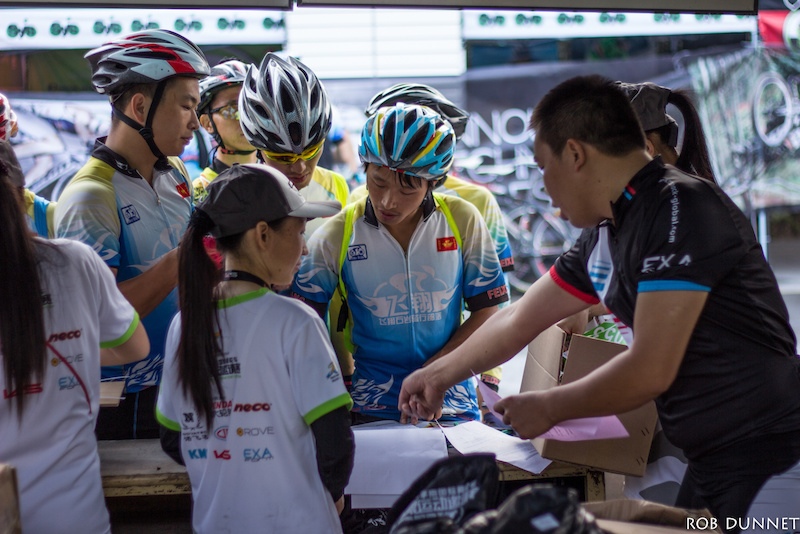 KS employees were on hand to register athletes. When I arrived at 7am there were already people lined up to register. 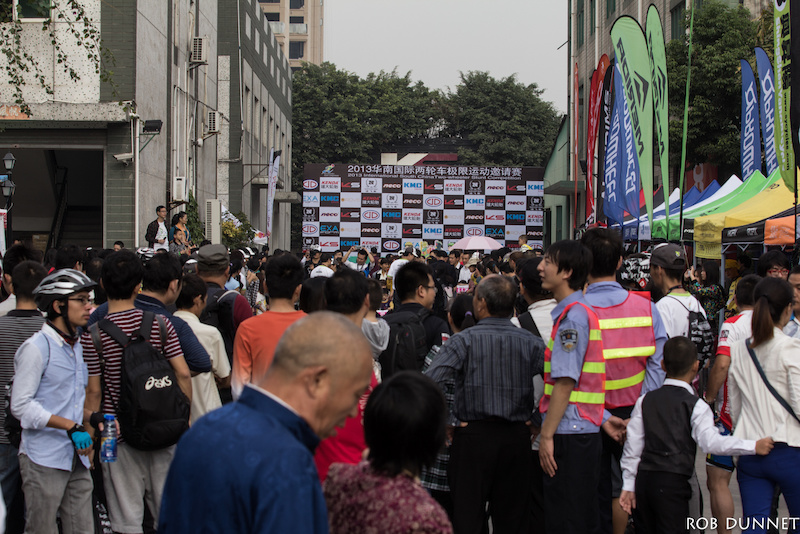 It's 9am on race day registration is finished and spectators and athletes have crammed into the space between two factories to be welcomed by the people responsible for the event.

Martin has brought together several Taiwanese and Chinese bicycle business owners to take part in this event and has even inspired them to put on events of their own. His love of cycling and drive to spread the sport in China and Taiwan has inspired the people around him to spend more time and money promoting the sport that they are involved in. 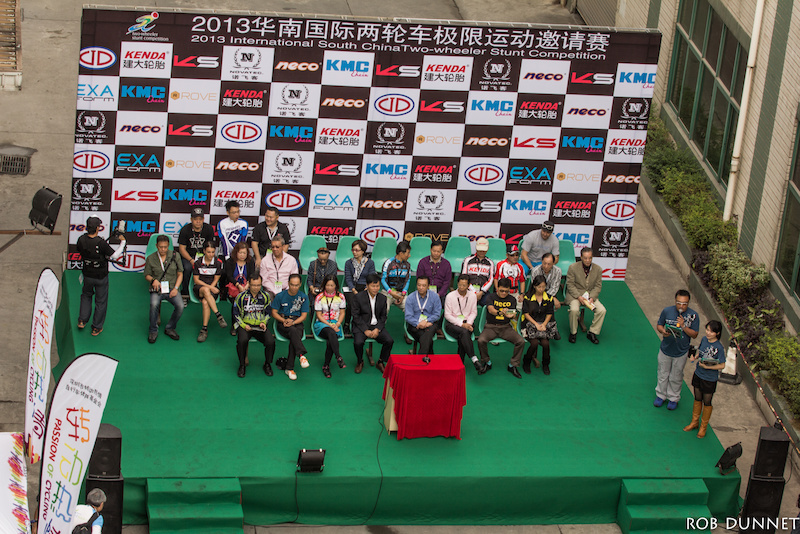 A who's who of the bike industry in Taiwan and China. Their is at least one person on this stage that has had some input into at least one of the parts on your bike.

KS' French importer Christophe Morera; better known as Momo has been attending this event for many years. The riders and spectators that have attended more than once know Momo for his high energy and late 90's dance moves. He seems to be at more than one place at a time and his energy level stays at 11 from the opening ceremony until the last bottle of wine is finished. I can not imagine what it was like to party with Momo and Tippie back in the day. 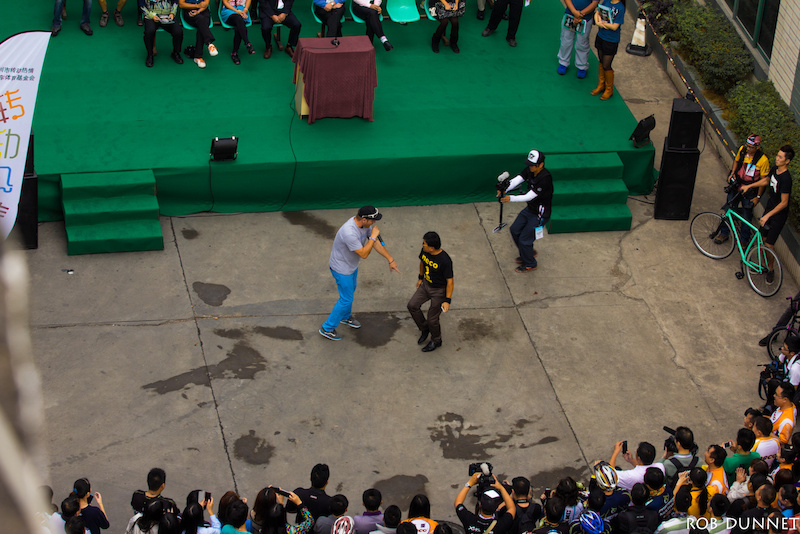 Momo and Neco have an impromptu dance party to start the day off.

The organizers hope that this race can spark the love of riding in people of all ages. The first race of the day is a pushbike race with kids from the neighbourhood. 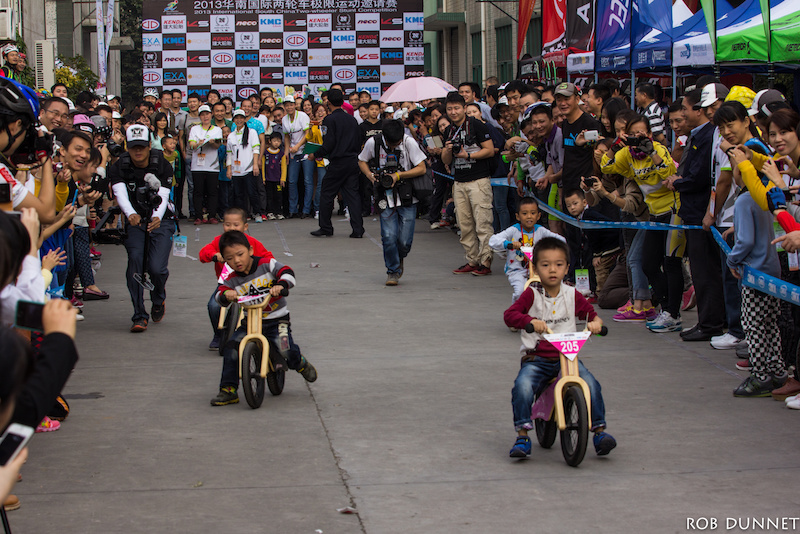 205 had the same look on his face from the start line to the finish line. 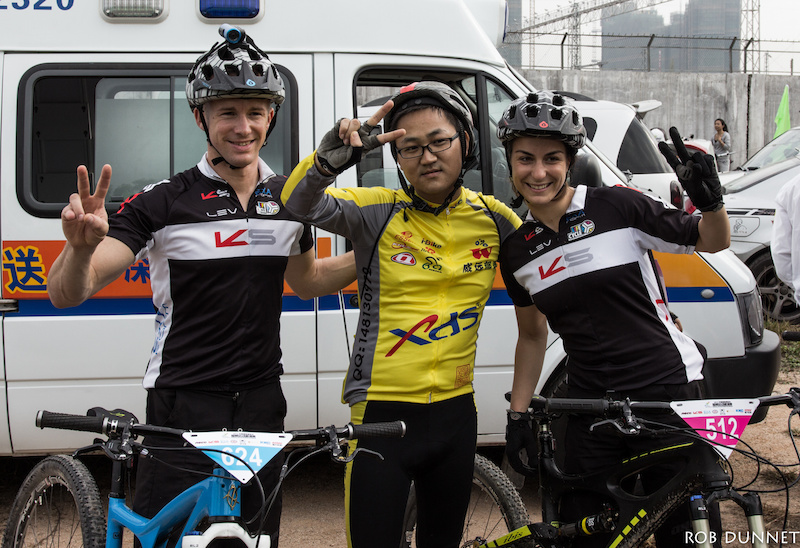 The first of many riders getting their pictures taken with Italian riders Valentina Macheda and Manuel Ducci. Pretty sure this guy would have been happy with just getting his picture taken with Valentina. 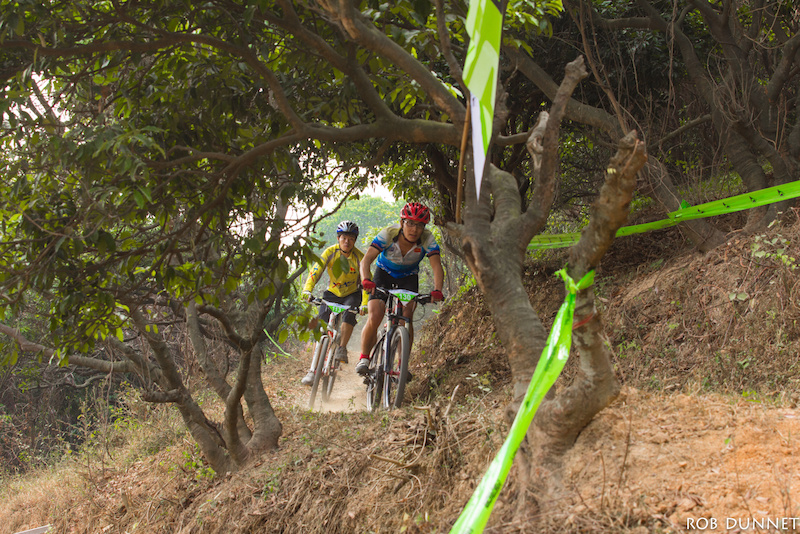 Early morning rains did not seem to have much effect on the temperature or the race course. When I arrived it was hot and dusty.

This could become the Chinese version of heckler's rock. The amateurs could not figure out this section of trail and like lemmings they kept crashing in the same place. 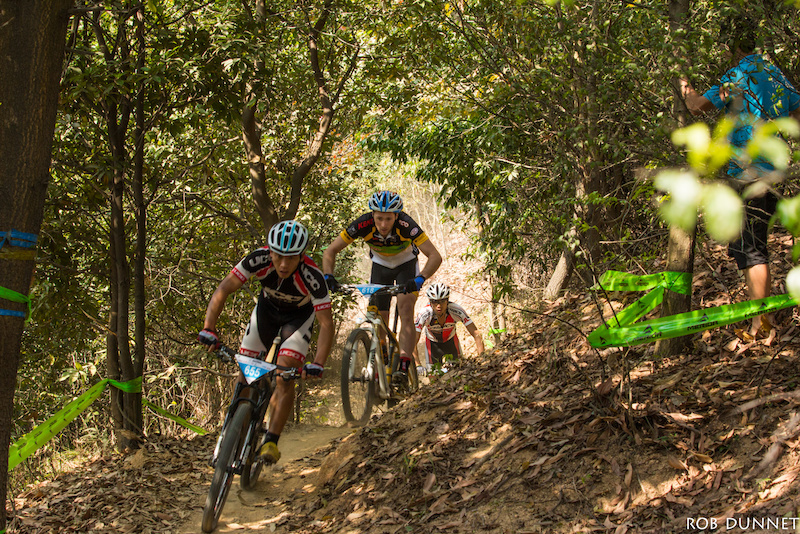 French rider Thibaul lhenry was in the middle of the pack at this point. He would make his way through the field and finish on the podium. 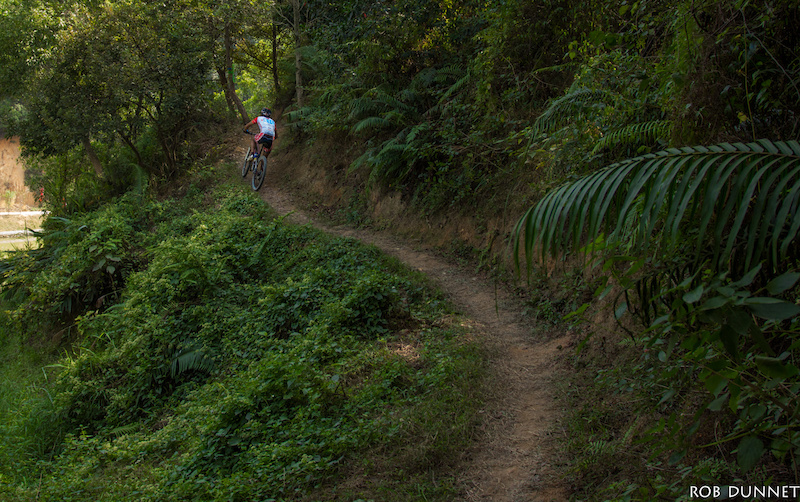 During the rest of the year this trail is used to teach people to ride horses. KS employees only have a couple of days to get the course ready for bikes which means moving a lot of horse created obstacles. 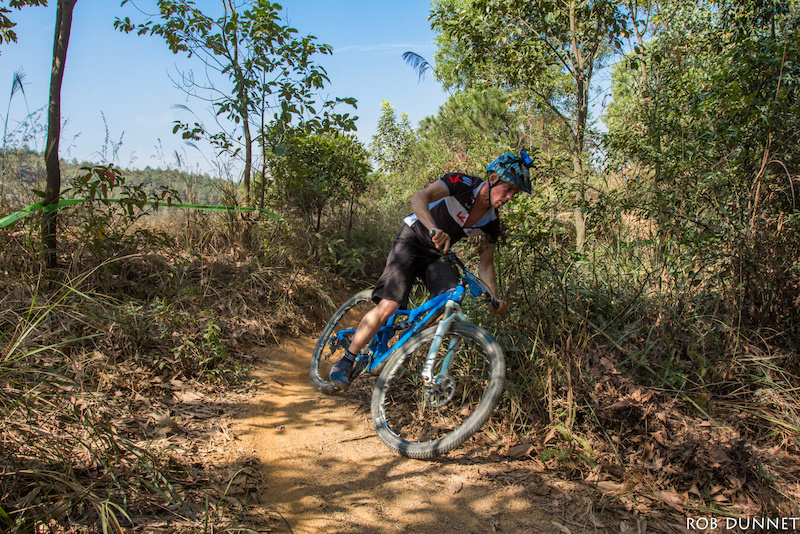 Manuel on the same bike he raced the Enduro World Series was the most creative rider skidding and jumping off of anything that he could. 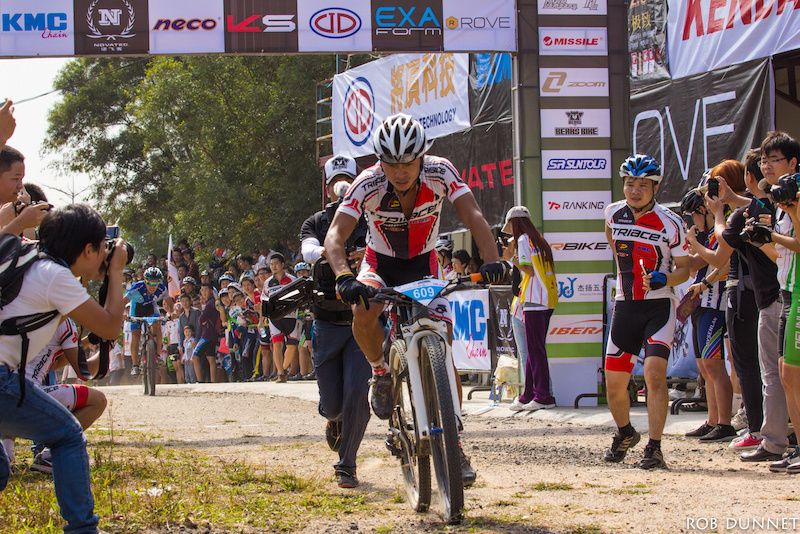 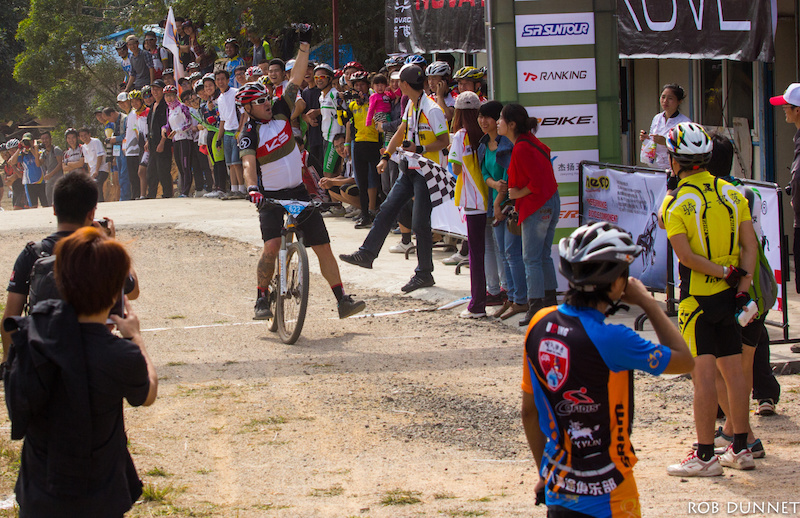 Momo limping across the finish line with one of his pedals in his hand. Pretty sure this was his first lap and he took the pedal off so that he did not have to finish the other four laps.

After the men's professional cross country race I headed back to the factory to make sure the 4X track was ready for the race. After sweeping and watering the track I got to see most of the BMX Park event. 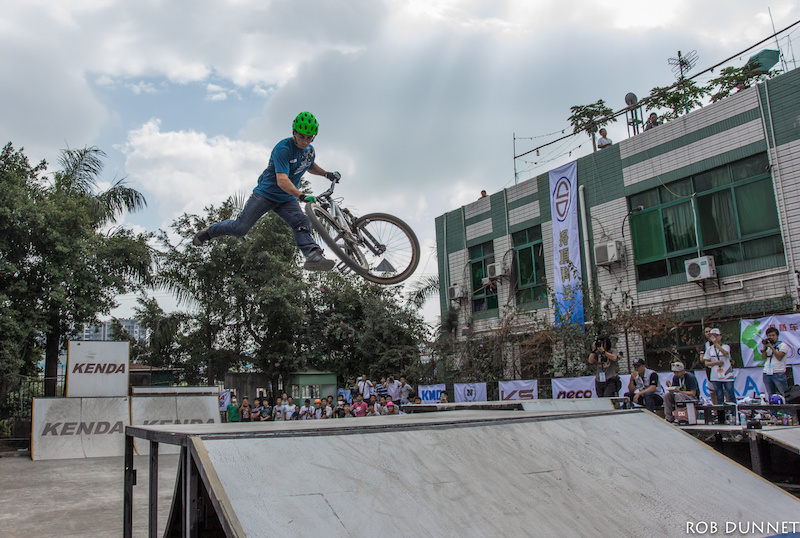 French rider Maxime Peythieu competed in the Park event against riders mostly on 20" bikes. He would end up winning the 4 Cross event on the same bike. 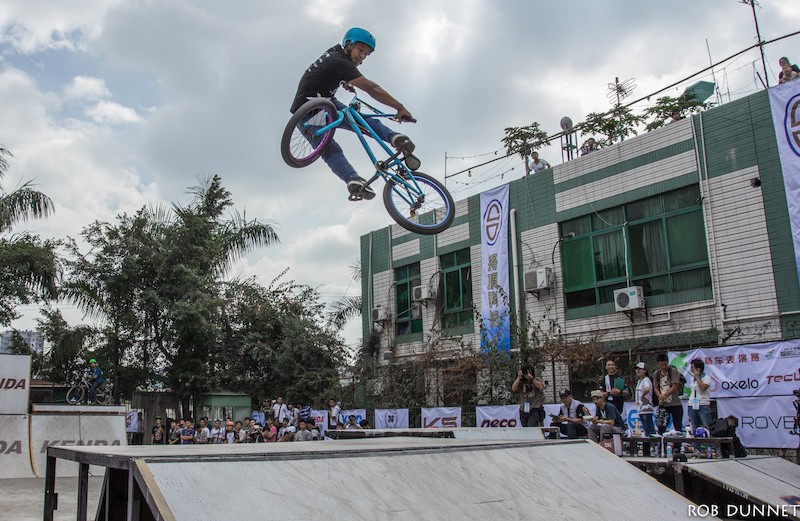 Taiwanese rider Li Yun Yi (Lee) won the Park event and in my opinion was on a completely different level. 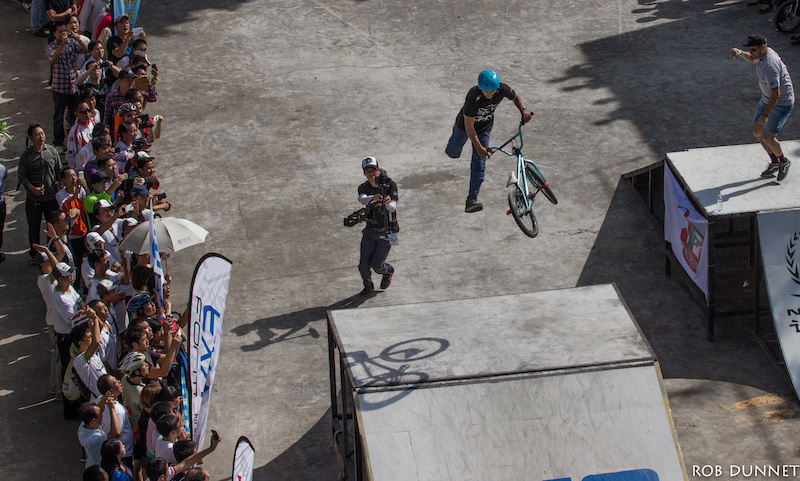 After blowing his tire on a double tail whip in the quarter pipe Lee used another competitors bike to finish his run and landed some big tricks. 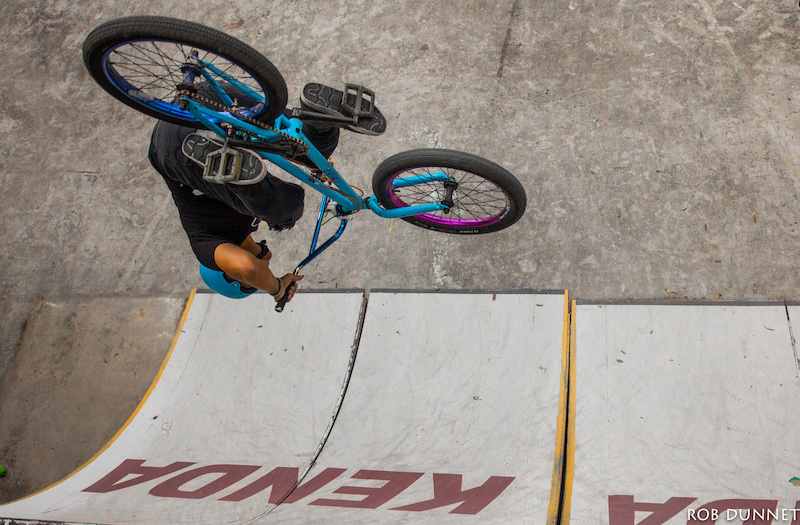 After a tire change Lee put together a solid run to win the competition. He had a huge flair in the quarter and followed that up with a 360 tail whip. 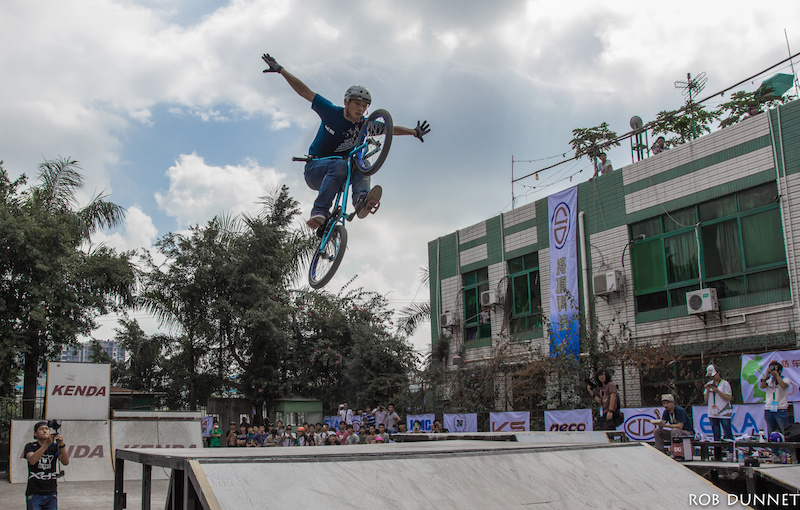 Suh Ik Joon (Tommy) works for Giant in Korea and said that he has not spent much time riding recently. He looked a little rusty on Saturday but he had the bugs worked out by Sunday afternoon. 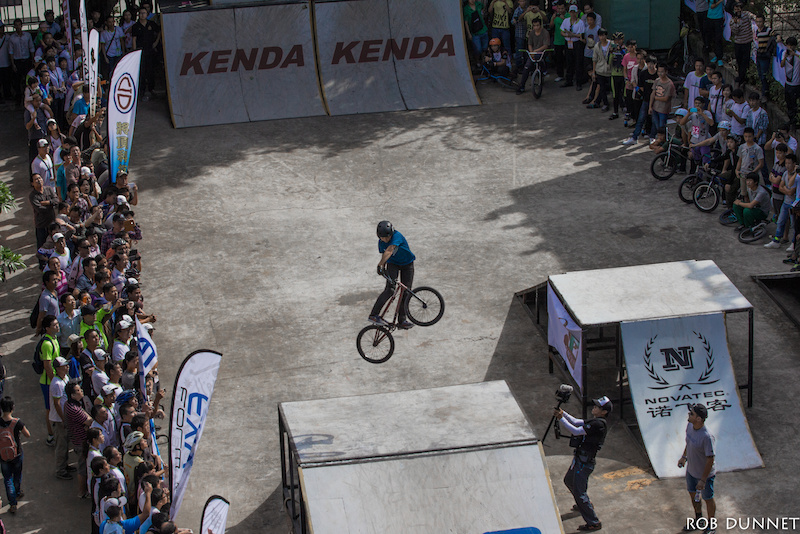 Korean Mini Park is known all over Asia. She races BMX and competes in Freestyle events all over the world. She put together a solid run.

I spent most of my time in Shenzhen in the factory garden with a shovel or hose in my hand. Once riders started showing up to practice earlier in the week I spent a bunch of time spinning laps with riders from all over China. I had made some changes to the track and wanted to make sure everything flowed together and to hear the riders’ opinions of what I changed. 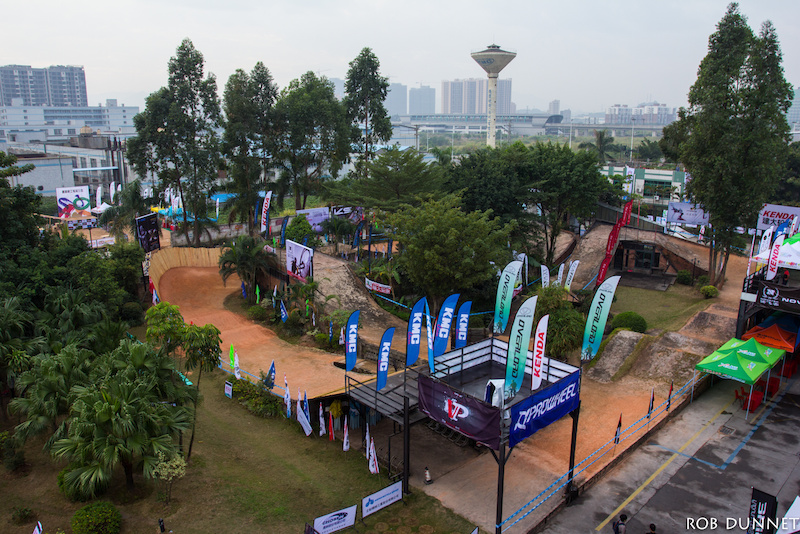 How many factory gardens have a 4X track in them? The KS garden was pretty quiet at 7am on race day. 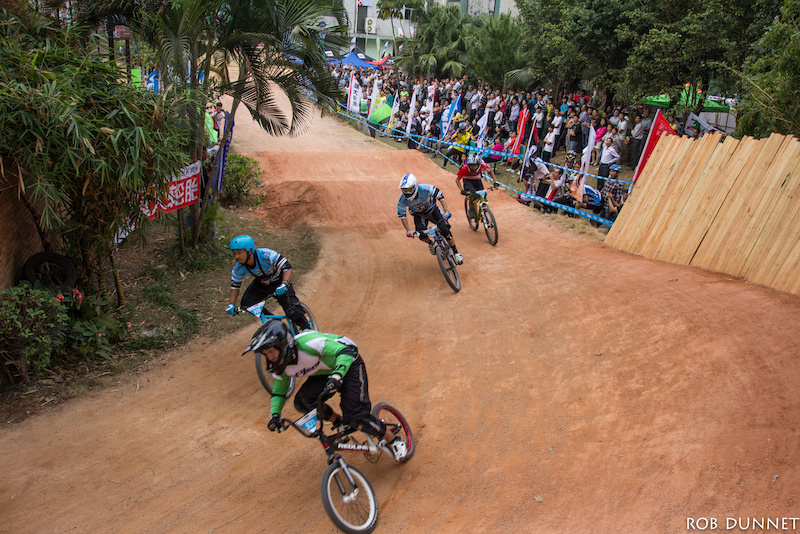 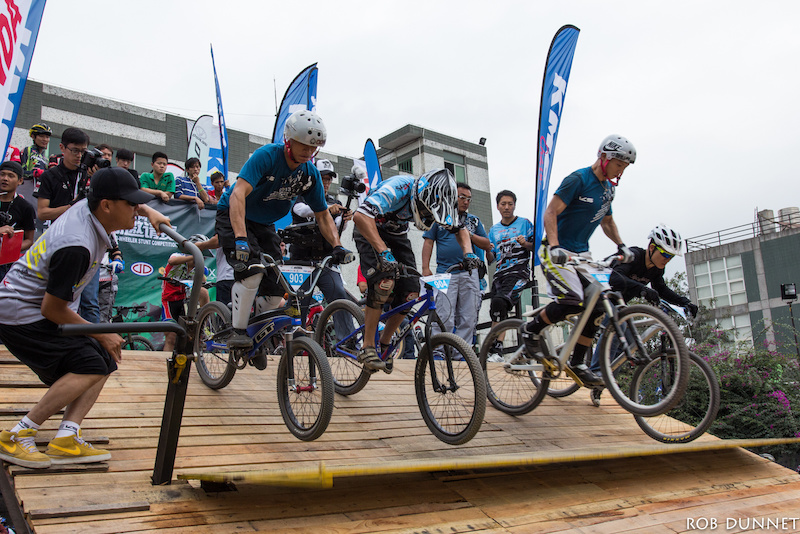 The start gate was upgraded this year with the addition of a bearing to make the gate easier to open and the starts more even.

With no automatic gate or computerized seeding, gate position was decided by drawing chopsticks. 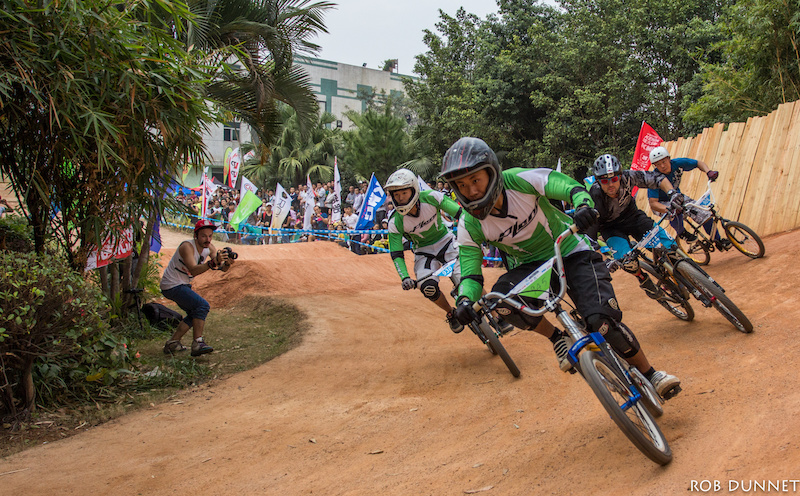 French rider Killian Bron would make it into the 2nd round and looked like he would make it further on until he was involved in a crash with a rider trying to pass him on the inside. 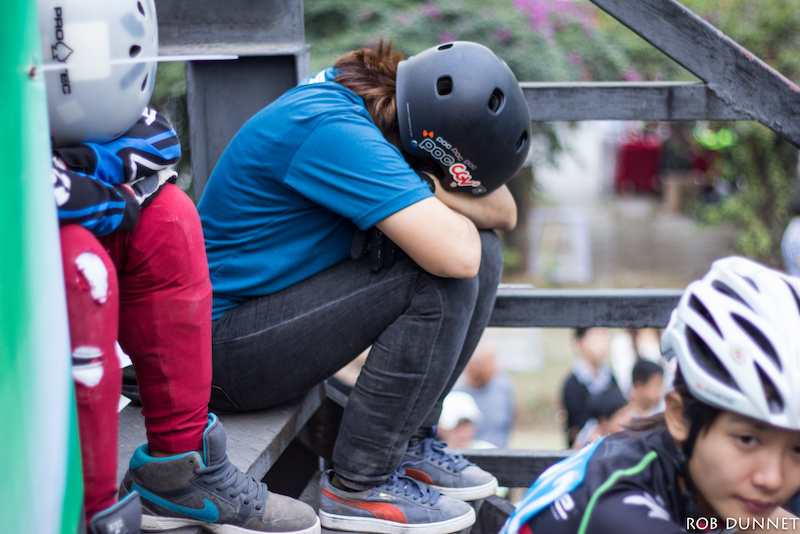 Most of the riders take part in more than one event. By the end of the day there are a lot of riders with their heads down trying to get some rest before their final race runs.

Bicycles have a way of bringing people together; they help make people who do not speak the same languages instant friends. Riding together and competing against each builds a bond in one day that should take years to build. These competitors might only see each other once a year but when they do meet it is like brothers who have not seen each other for a year.

Martin has worked hard to make this an international event. This year there were riders from Italy, France, Taiwan, Hong Kong, Korea, Singapore and all over China.

There are a lot of people who helped make this month a memorable experience. I have to thank Martin for making it happen and making me feel at home at his home away from home. I have to thank the people at the factory in Shenzhen for taking care of me and putting up with me for a month.

firefox90 (Nov 26, 2013 at 22:42)
I'm from the US, but during the past year I lived in Hong Kong and I'm currently living in Beijing. Hong Kong had an awesome riding scene! Beijing is tougher to penetrate especially with 0º weather right now but the surrounding area shows promise. It's awesome to see coverage of this budding mountain bike region. Keep it up, PB!

fade-to-black (Nov 27, 2013 at 1:14)
i ride in Hong Kong, illegally in pok fu lam country park. to be honest i do most of my riding in whistler during my summer holiday. Hong Kong trails just dont compare as far as fun factor goes

wuwanchen (Nov 26, 2013 at 19:10)
It was a pleasure that I rode bike with Martin back to around 3 year ago in the event organized by VP-bike trip from Beijing to Shanghai.