A Day With Jacob "Cob" Hyde

Oct 26, 2010 at 21:42
by Justin Brantley
Tweet
Jacob Hyde is a true Mountain Bike enthusiast from Scotts Valley, CA. He kills it on the downhill bike, shreds the dirt jumps to pieces, and builds and maintains the local trails around Santa Cruz County. If you ever meet Cob you will understand right away why this kid is so well liked. Along with tremendous boost and style, Cob is one of the coolest dudes around. He is funny, smart, has complete confidence, is always ready to shred, no fear, and has sick dirt jumps in his backyard. What more could you ask for? Recently hooking up with Deity Bikes and Division 26 clothing, Cob is starting to make his mark in the industry. 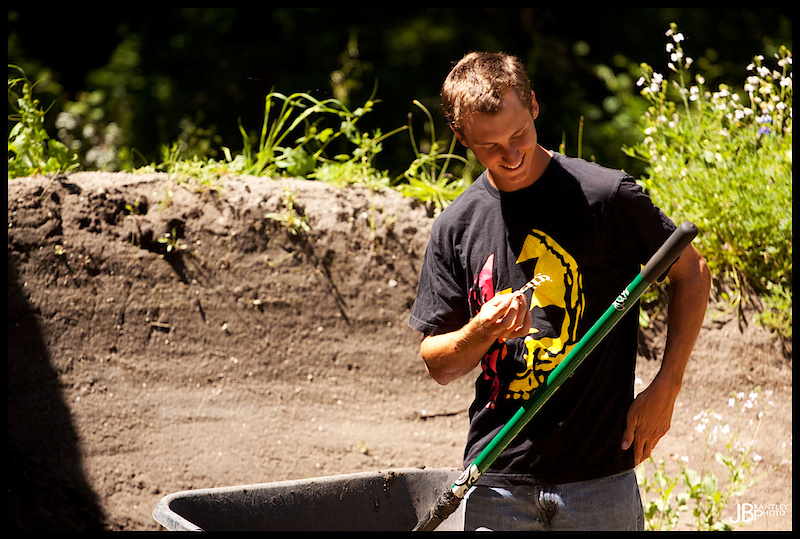 Cob has been riding bikes all his life. At only 19 years olds he is a legend around Santa Cruz. Anybody who’s anybody knows Cob. His jumps in his backyard are one of a kind and beautifully hand sculpted. Every pro rider that comes into town gets to go to Cobs house. Living in Santa Cruz, having great style, awesome attitude, and his massive tech jumps in his yard that everyone in the industry has heard about has made Cob grow very fast in the sport. 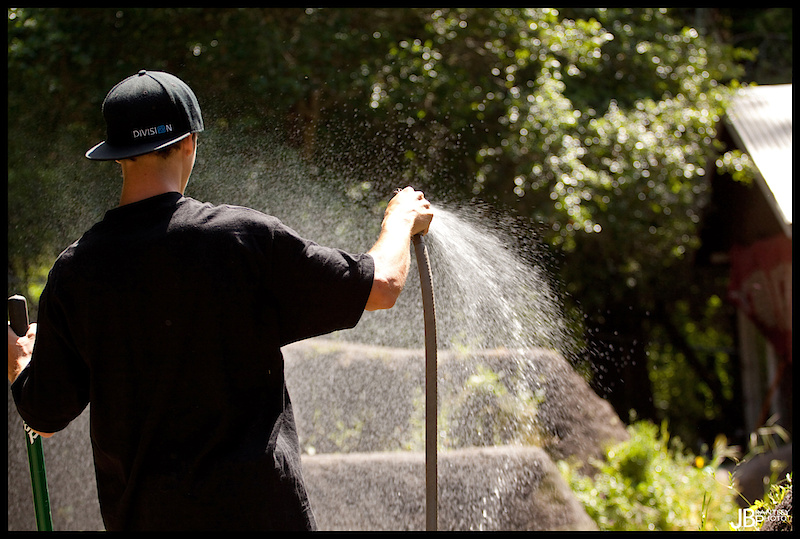 Without watering these jumps would they would be a pile of sand! Cob as actually found a stash of nice clay from down in the bottom of the yard that he has packed the outside of the jumps with to keep them looking and riding perfect!
I emailed over some questions for Cob to answer for you guys to find out a little more about him!

-How long you been riding bikes? What was your first bike?
I have been riding bikes for as long I can remember. My parents got me riding a bike by the age of 5. After years of playing team sports I decided to get a Mtn bike. The bike that got me into riding was a canadian frame made by Balfa. It was a green hardtail that weighed at one point almost 40lbs. That bike was legendary I will never forget it.

-Growing up in Santa Cruz you get the opportunity to ride with some of the best Mountain Bikers in the world. Who has been your biggest influence in the scene?
Santa Cruz is one of the best places in the world to go if you like to ride any type of bike. The local riders that live here are so dedicated to pushing the limits and building huge jumps and keeping trails running smooth. For my 15th birthday my parents got me a movie called Top soil 2. Top soil was a movie about all the locals in Santa Cruz riding anything from street, dirt jumps and downhill. Jamie Goldman was my favorite rider in that movie and he had the biggest influence on me when I first began riding. After riding for a couple years riders like Alex Reveles and Ryan Howard changed my style of riding, they looked so good when they rode and were always out at the jumps having fun and working on the jumps. Those guys are what influenced me to build the jumps I now have in the Backyard.

-You are a big part of the “No Dig No Ride” motto in Santa Cruz. Can you go on to explain how you feel about it?
Yeah the “No Dig No Ride” motto is great. If you are looking to have good jumps that last a long time this is the way to do it. Say if you have a group of ten guys come over and you have a rad session. The jumps are going to be beat up and are going to need some work. You need to make sure the jumps are left in the same condition or better before everyone leaves. Many hands makes light work, meaning if you have a group of people over try and have a 1 hour dig session, it is amazing how much work you can get done. 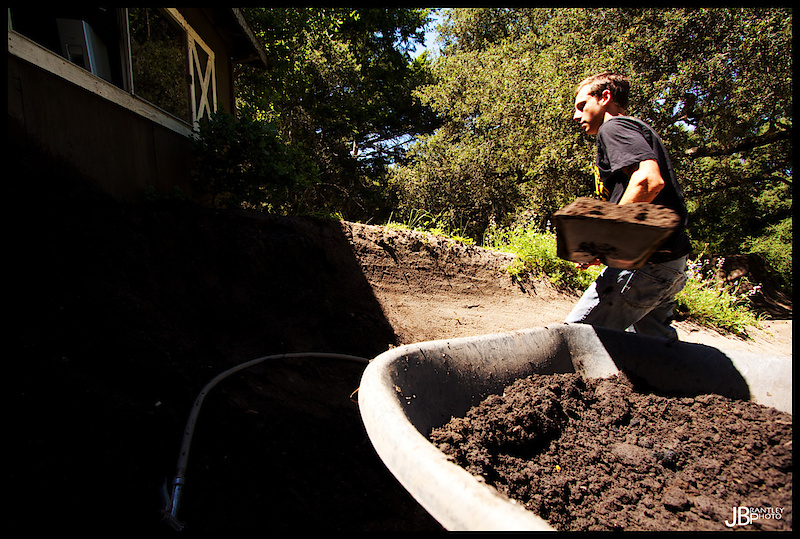 Doing some work, then chugging some Zona! 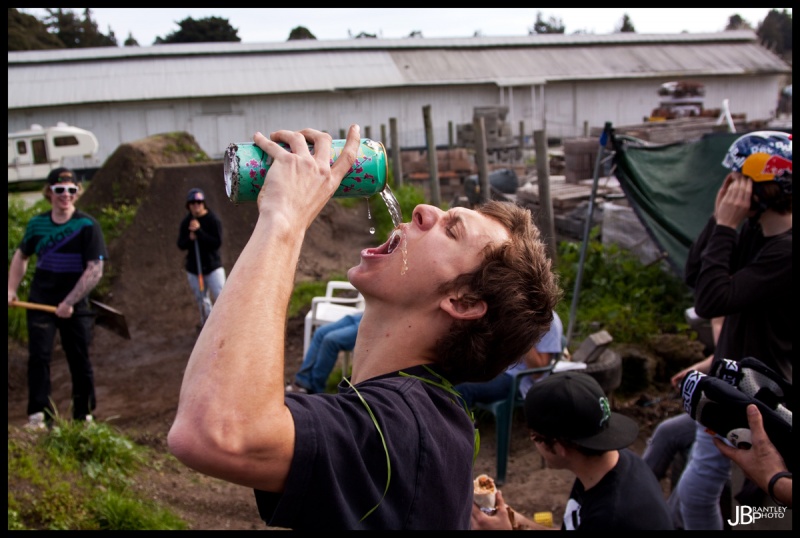 Congrats on the new Deity sponsor! Must be nice to have a solid sponsor like that! How do you like the DJ frame from Deity?
Thanks! Yeah dude Deity hooked it up. Deity is a rider owned company they make all types of components. Their new line up this year is incredible; everything is so light yet durable and looks good too. They also just came out with the new dirt jump specific bike called the Cryptkeeper. This frame is one of a kind; it is such a clean looking frame that weighs nearly nothing. The geo is designed to keep you stable in the air and ground but also allows you to throw the bike around a lot. By far the best bike I have had and the best company I have had a chance to work with.

-Dude you have some of the best jumps in Santa Cruz right in your backyard. How has this helped your riding over the past few years?
Having jumps in the Backyard is so rad! If I ever get bored I just walk outside and work on the jumps for a couple hours, then call up some dudes and have a fat sesh. The jumps have helped me progress so much. Not only my riding but my building skills as well. New people come over all the time and will help me learn a new trick or teach me something new about digging. I don’t know what I will do when its gone haha. Well except move out of my parents place and get my own back yard!

-You have some of the best style and boost in MTB. What drives you to be such a steezy flowy rider over being a crazy trickster?
The one thing that drives me the most is having fun. Style comes with experience and bike control. Everyone has their own type of style. My style is boosting big jumps and getting sideways and RAD all day. Don’t get me wrong I love to throw down big tricks as well I just get the most fun out of a steezy and flowy day at the local jumps.

-I know you love to shred DH as well! How often do you ride DH?
Yes! Riding trails has got to be one of the most relaxing yet adrenaline pumping activities you can do. Nothing is better than chillin in the Redwoods with your good friends while shuttling all different types of trails. I try and ride DH as much as possible, morning shuttles are the best especially on hot summer days. I believe that being able to ride fast down a trail gives you bike control and more style. Go ride some trails kids! Bring back the mountain in mountain biking!

-If there was one spot in the world that you haven’t riden yet and you can go there right now, where would that be?
New Zealand would be my first choice, it looks like such a chill area and the riding there speaks for itself. I have seen pictures of jumps and freeride stuff that makes me drool. Looks like a rad place in general.


-Any shout outs or thanks you would like to give?
Mom and Dad for supporting me through everything and letting me tear up the backyard. Eric and Sadie at Deity for the new bike and parts and Dale at Division 26 for the awesome clothing. All my friends that I ride with everyday, anyone that helped me build the jumps. Thank you all, now go ride your bike!

I leave you with some shots! 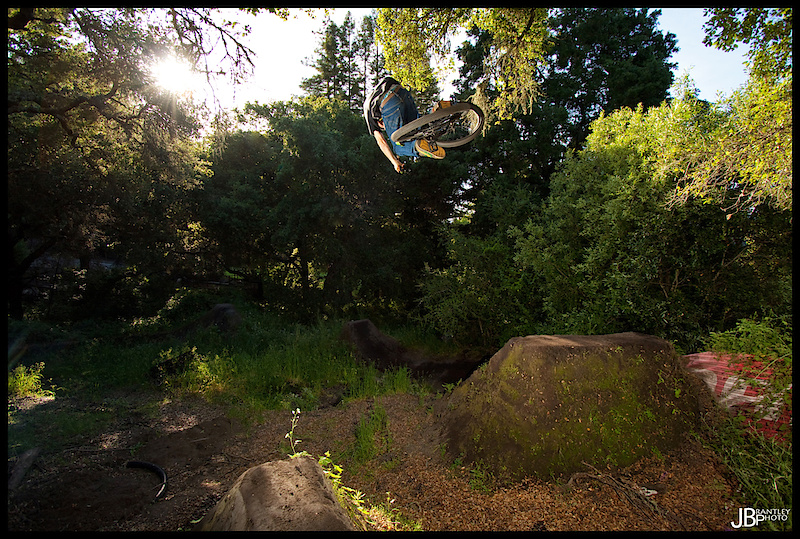 Cob gets nasty on the hip before the sender! This was just before the summer of 2010. You can see how green and wet it looks! 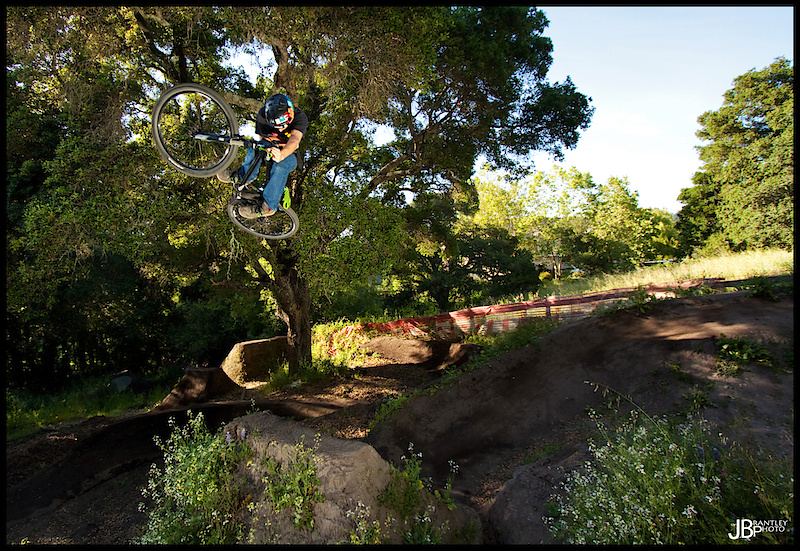 Tabling out of the biggest berm in SC County! Hahaha, not sure if its the biggest but its the only one with a roller in the middle! 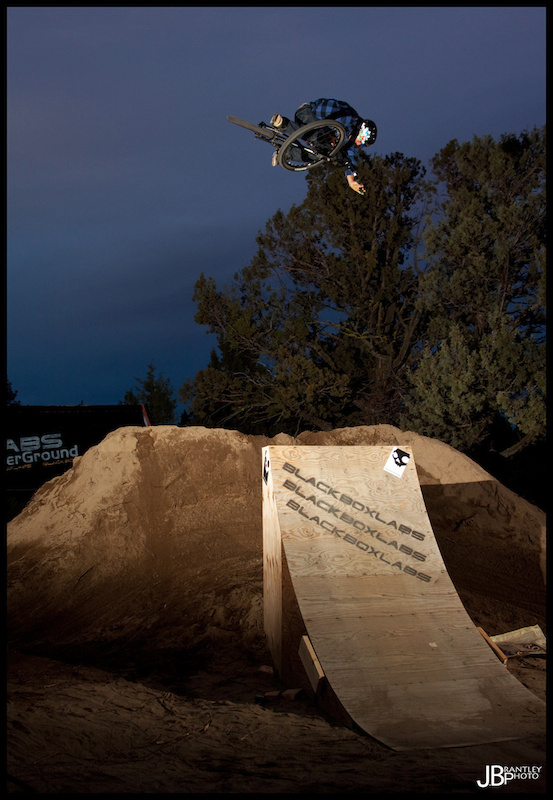 That would be a fat 3 invert! This was taken at Jamie Goldman's house in Oregon during the Underground-and-Upsidedown contest! 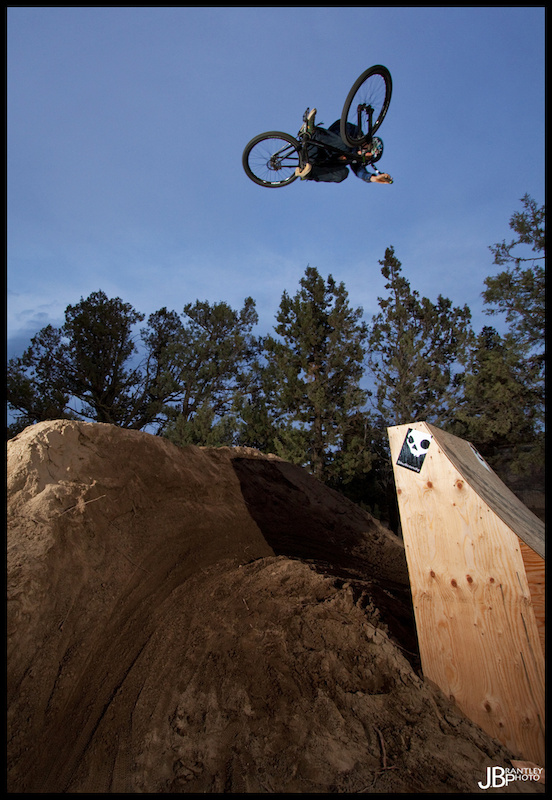 Another view of Cobs invert. The roost marks on the back of the landing are from the finish line on the timed race during the contest! 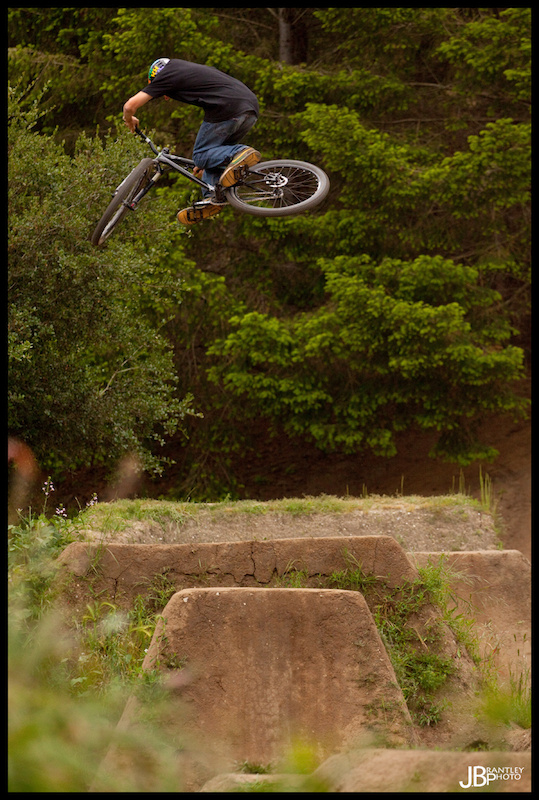 Cob get steezy as f*** with this whip! Gotta love this guys style. He was doing these all day and this was prolly not even the best one! Needs to be on slomo video to capture the whole thing! 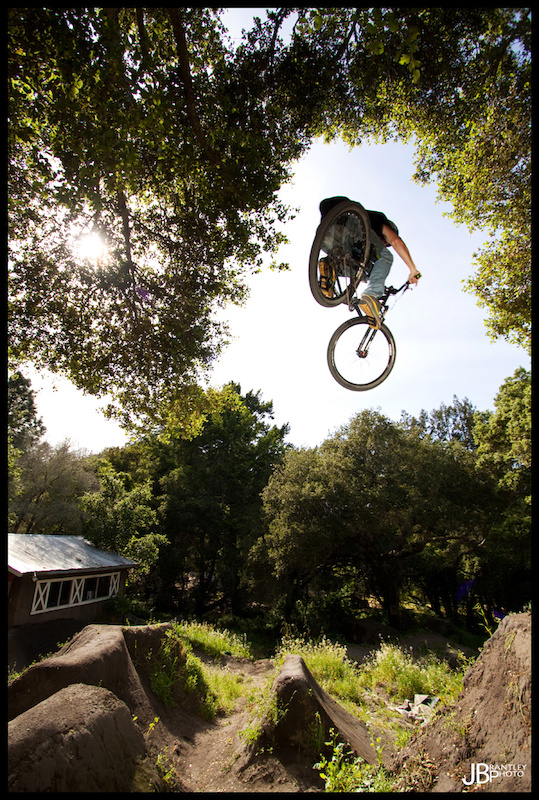 Whipping it good at his house! Look at those jumps! That's the hard clay packing I was talking about earlier that keep these jumps up to par! 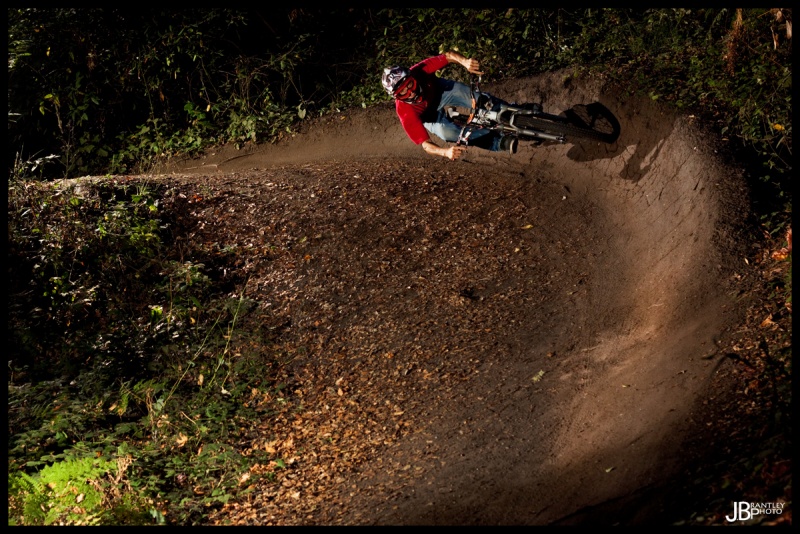 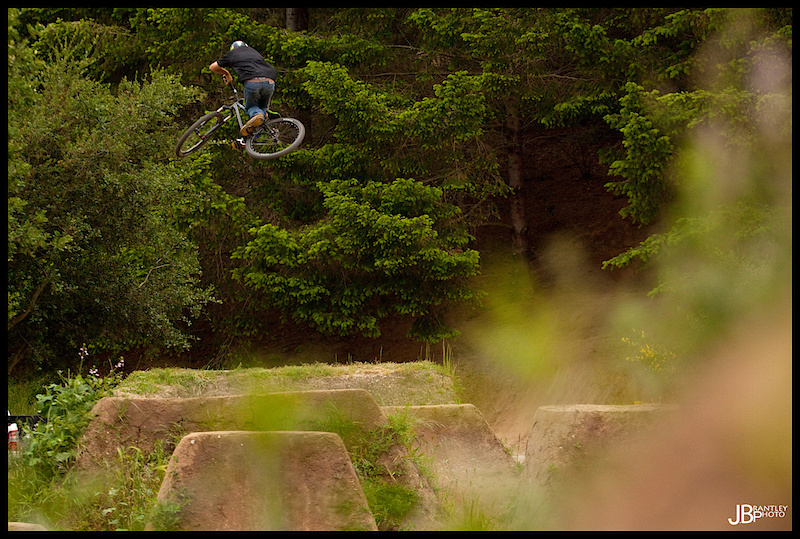 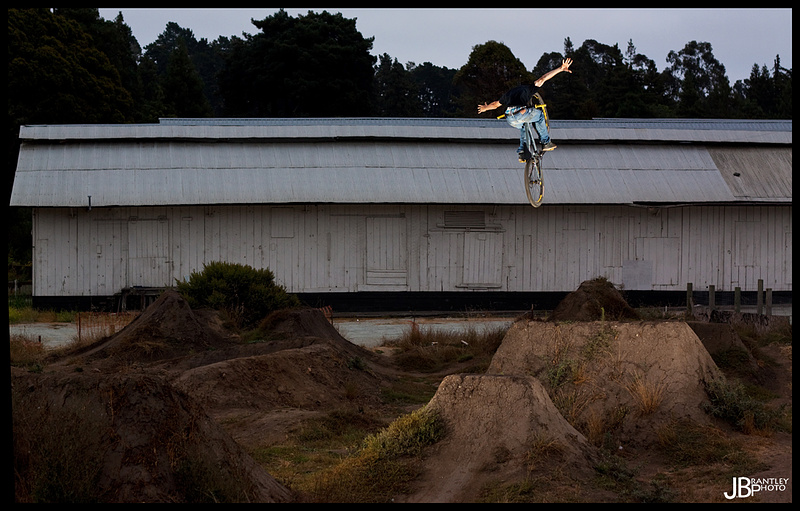 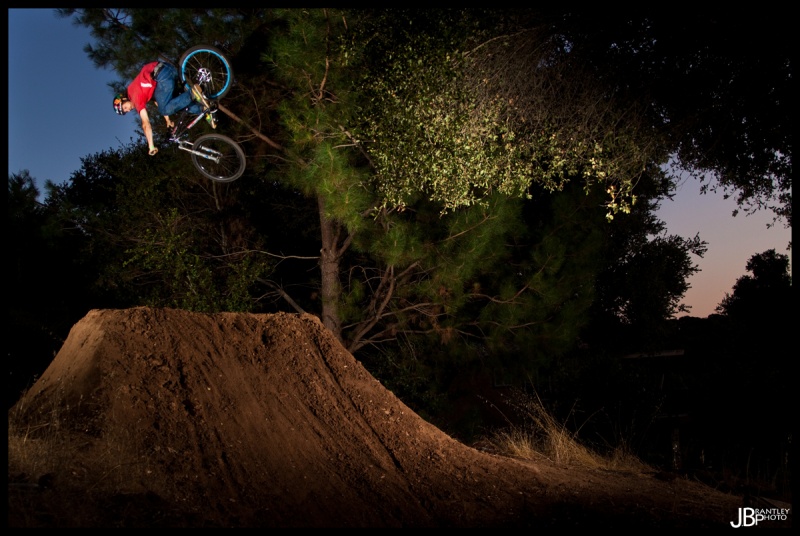 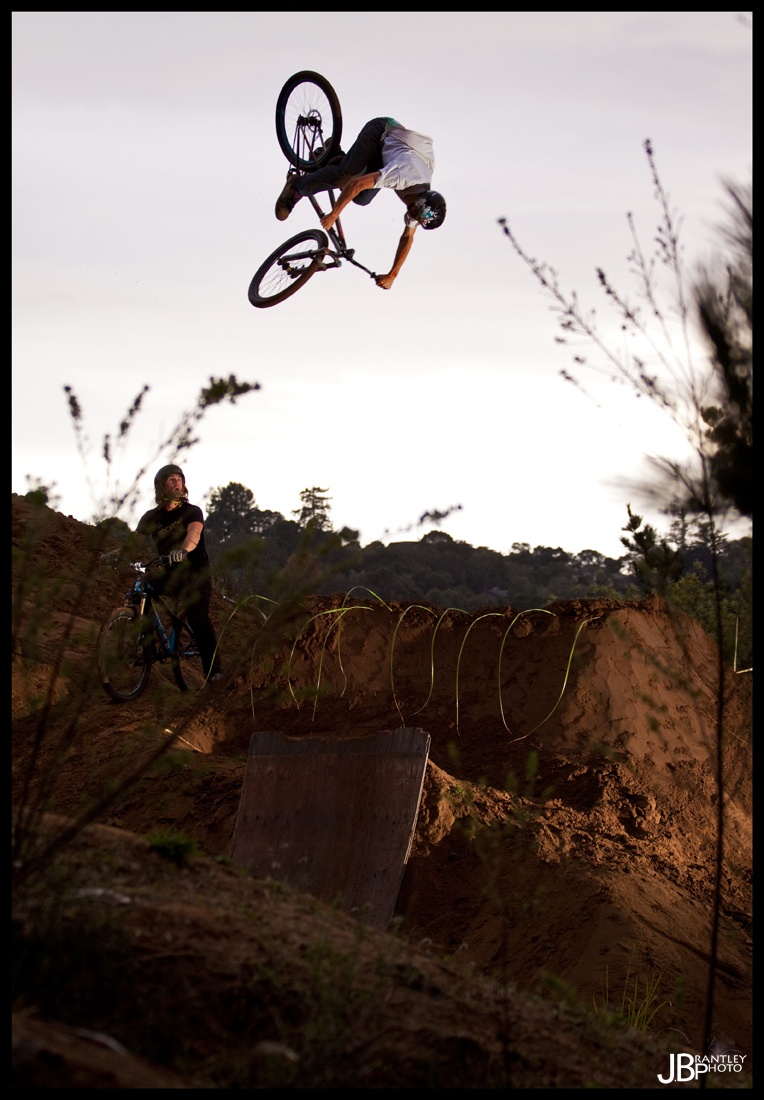