Jan 20, 2021 at 9:23
by James Smurthwaite
Tweet
We use Slack as our workplace communication tool at Pinkbike and we have a #randoms channel which we use to share an assortment of videos and stories from all corners of the cycling world and beyond... We thought a couple of the moments from the past week were too good not to share with a wider audience, so here are some of the highlights. 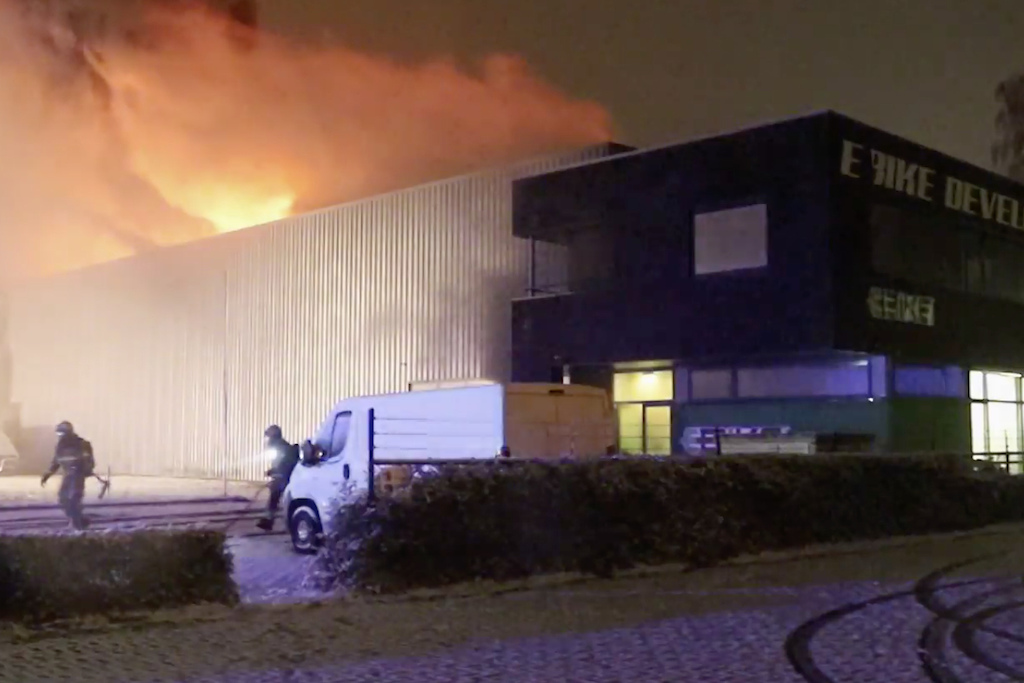 Screenshot: omroepbrabant.nl
Dutch media is reporting that a fire at an ebike warehouse is suspected to have been caused by a malicious attack.

The incident started at around 4:20 am on Sunday at the facility belonging to Ebike Nederland in Cuijk in the province of North Brabant. A BMW 1 Series drove into the building's lobby and the local fire department had to deploy four engines to tackle the blaze that was not fully extinguished until late evening. Luckily no lithium batteries were stored in the vicinity as they would have made the blaze a lot worse and given off dangerous fumes.

The mayor of Cujik Wim Hillenaar described the breach as an ‘attack’ and the police also said it was a targeted action as there are no signs of mechanical damage to the BMW. Arno Cup, director of Ebike Nederland, told NieusFiets, "Of course you do not accidentally drive into a building. The power has also not been on yet. When we have that again, we can view the camera images and know more. We can probably look back on that a lot."

The fire has caused significant damage to the facility, Cup has yet to fully account for the damage but believes it to have run into the "millions" of Euros. He said, "There were many bicycles ready, which were almost complete. If we had not had to wait for certain parts, they would already have been delivered." Fortunately, the contents of the building were insured and Cup believes the company meets the conditions set by the insurer.

Demand for ebikes, especially the delivery bikes that Ebike Nederland specializes in, is at an all-time high. As Cup puts it, "Because of Corona, everyone who can bake a hamburger is going to have a home delivery." So, was this a case of corporate sabotage from a rival company or simply an accident? The situation is still developing and we'll update you as more news breaks.


Former trials World Champion, Aurelien Fontenoy, climbed a 140-metre building using only bunny hops for charity this week. Overcoming the 768 steps took the Frenchman 30 minutes as he summited the Tour Trinity building in La Défense. Fontenoy apparently did dab once but went back to the bottom of that stairwell to ride it again. Fontenoy took on the challenge for the Rêves association, which works to turn the dreams of seriously ill children into reality (his fundraiser can be found, here). His next goal is to repeat the feat up the Eiffel Tower.


Here's a situation that could have gone a lot worse. Trying to get a close up at the Dakar rally, this helicopter collided with a Kamaz race truck. The Drive reports that the helicopter snagged an air intake off the top of the vehicle with one of its skids and only some quick reactions from the pilot were able to avert disaster. Thankfully, both the truck and the helicopter escaped the collision with only minor damage and no injuries.

An XC Remake of That 4X Overtake

Remember Michal Marosi's wild wallride overtake from JBC Bikepark in 2011? Here's a slightly less impressive version by Hercilia Najara from the world of XC. The Brazilian rider's caption translates to, "Throwback Thursday to a memorable moment. One of the best memories I have inside the tape: making a split-second decision and putting into practice an overtake like this ..."

cxfahrer (Jan 23, 2021 at 7:17)
True. Experience this quite often, trails seem to attract people with urging demands.

thechunderdownunder (Jan 23, 2021 at 9:24)
Haha, for once I wish I would have watched the video before going straight to the comments!

Riggbeck (Jan 25, 2021 at 0:15)
@waldo-jpg: I wish this wasn't so true in Bayern, why can't they at least walk off the path before leaving a huge steaming log? Must have had to avoid 4 or 5 logs with a toilet paper tent in the last few months alone. Can't blame it on all the "covid tourists" either, it has always been a problem.

Narro2 (Jan 25, 2021 at 12:35)
@Riggbeck: is this a German thing? i stumbled upon a couple having sex once on a trail that connects Mainz to Frankfurt, what surprised me the most is that it was man to man action, hopefully i scared them off cuz further down the trail a group of people were coming their direction.

waldo-jpg (Jan 25, 2021 at 22:31)
@Riggbeck: now that i think about it, ive only been riding mtb for a little over a year but had to deal with illegal loggers twice

Riggbeck (Jan 26, 2021 at 0:08)
@waldo-jpg: the mountains by my house have paths lined with toilet paper left by the ladies. I've even seen them drop it after blotting. It's really grim.

@Narro2 Americans are prudes but from the months I've spent there I see you are toilet trained to a higher standard.

GT-CORRADO (Jan 23, 2021 at 7:41)
@Adamrideshisbike: Yes, he certainly is, and someone should explain his error(s) to him using International Sign Languge ! You know the sign language where the hand is folded up into.......a fist?
He was waaaaaaayyy too close, particularly when you consider how long a lens most of those cameras have. There is no valid reason for him to that close when they can still get the shot from 30 (or more?) feet away.
And, had the damage been serious enough to put that racer out of the race, the chopper jockey's safest next move would be to leave the country.........

hubertje-ryu (Jan 23, 2021 at 22:22)
@GT-CORRADO: they prolly would've just said something like "unfortunately there is no scenario provided in the rules that would allow you to continue the race" as they did when they refuelled Andrew Short's bike with water. It's still ASO after all.

Pause. "Bake" a hamburger? Sounds sinful to me.

DizzyNinja (Jan 23, 2021 at 8:45)
You can’t grill a burger in Europe unless you have a Euro5 compliant catalytic converter on your BBQ

iammarkstewart (Jan 23, 2021 at 8:21)
Great @jamessmurthwaite. With "Prairie Dog", you've now given us the PB version of getting Rick Rolled. Thanks...for nothing.

commental (Jan 23, 2021 at 9:38)
That helicopter should've dropped back behind the truck. No excuses for not slowing down when you've got rotors that size.

Thats a weak burn attempt. Not even singed.

iamamodel (Jan 23, 2021 at 19:37)
I once bunnyhopped three stories: The Little Engine That Could, The Tale of Peter Rabbit, and The Hobbit.

GT-CORRADO (Jan 23, 2021 at 20:02)
Just a working theory, but were there any graphics on the front of that building that resembled a bag of DORRITO's?? A severe case of 4:20 induced munchies will not be denied their craving!!

highfivenwhiteguy (Jan 23, 2021 at 11:58)
The resistance has begun! Take that you dad-bod weekend warriors. #analog4lifeoratleastuntilmykneesblowoutokiactuallywantanebike

It's honestly my endgame "roadbike" that I could tour around the world on too.

Fixed that for him.