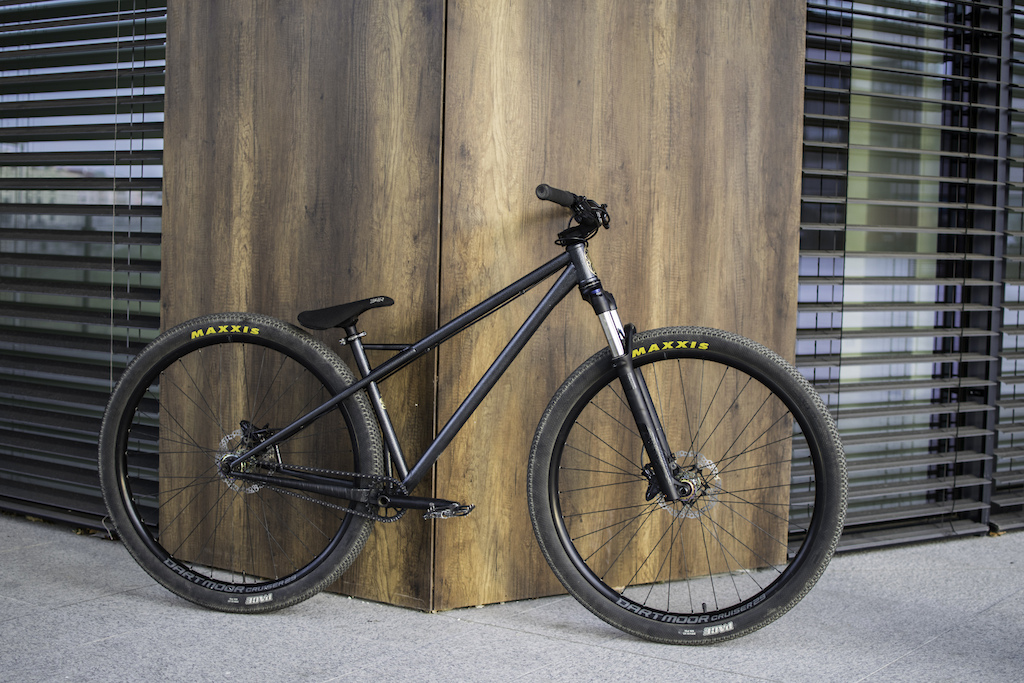 Dirt jumping has ben the last bastion of the 26" wheel ever since the hoops wars kicked off but if one builder from the Czech Republic has his way then it may not be the case for much longer.

You may remember the Switchcraft name from a Brit-inspired 29er steel trail bike we featured in 2020. Since then, Jakub has added a flat bar gravel bike, a second single pivot and this radical hardtail to his line up.

For now, this bike is simply an experiment without a name as Jakub wanted to see how short you could physically make the chainstays on a 29er and how that would affect the handling. The answer is, apparently, 388mm. Given that the radius of a 29" wheel is 368mm and you have to fit a tire in there as well, it's safe to say he's cutting it fine. 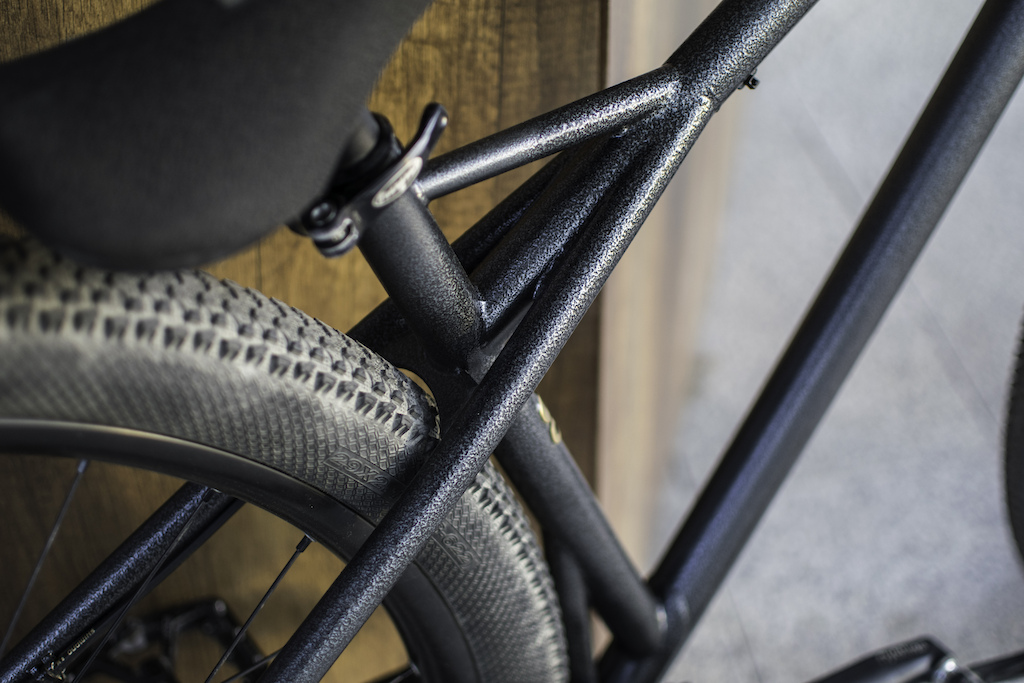 The clearance is super tight on this 29er.
Jakub has achieved this by welding the seat tube to the downtube with a 60mm offset from the BB and another smaller tube used as a reinforcement. There are also chainstay yokes, which means there are steel plates welded to BB to fit chainring properly. With the set up he has been running, Jakub says you could fit a credit card in the clearance between the wheel and the seat tube, but that's about it - you certainly don't want to take this bike off road unless the dirt is packed hard like concrete. 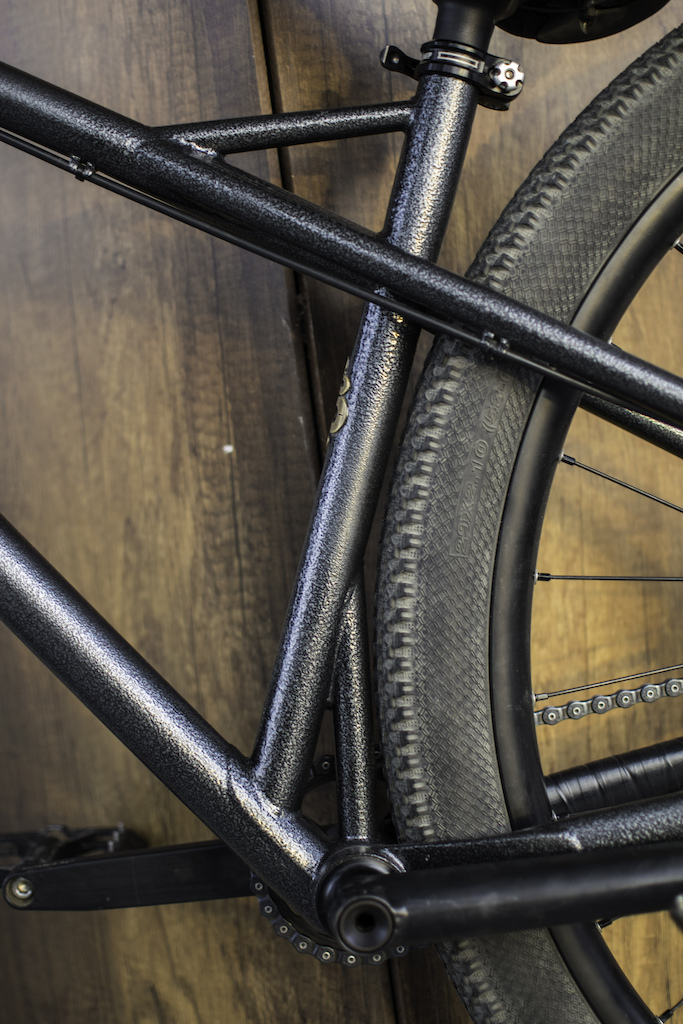 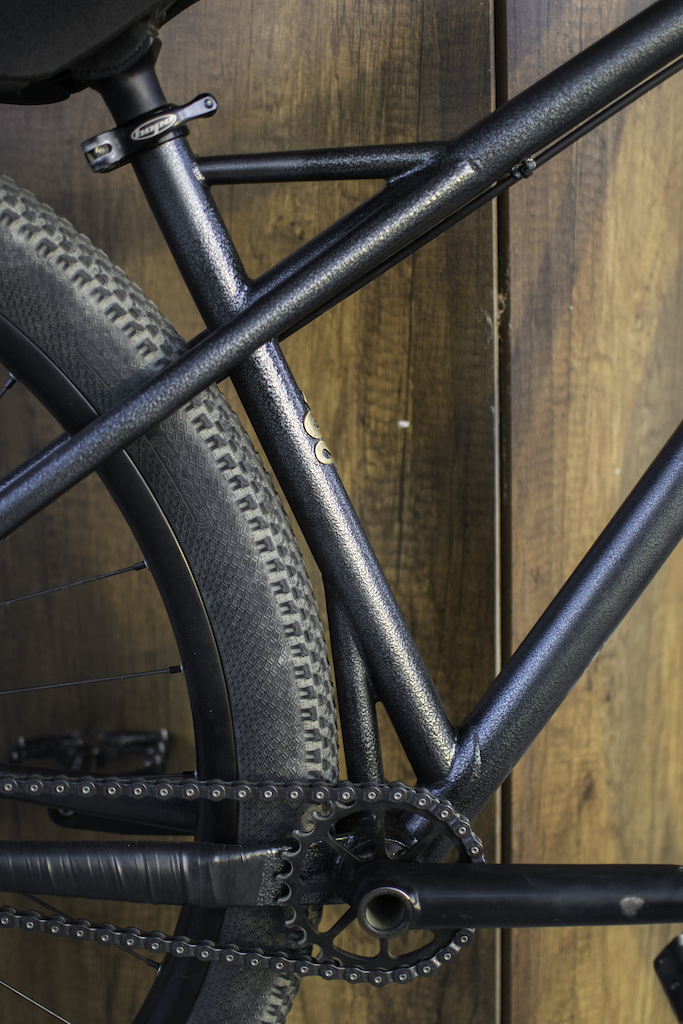 Jakub's unorthodox tube layout has allowed for the 388mm chainstays.
For now, Jakub says he is running the bike as an oversized BMX and that the short stays mean he has no trouble at skateparks or just street jibing. He says the main difference from a 26" dirt jumper is the stability. offered by the momentum of the big wheels when jumping. 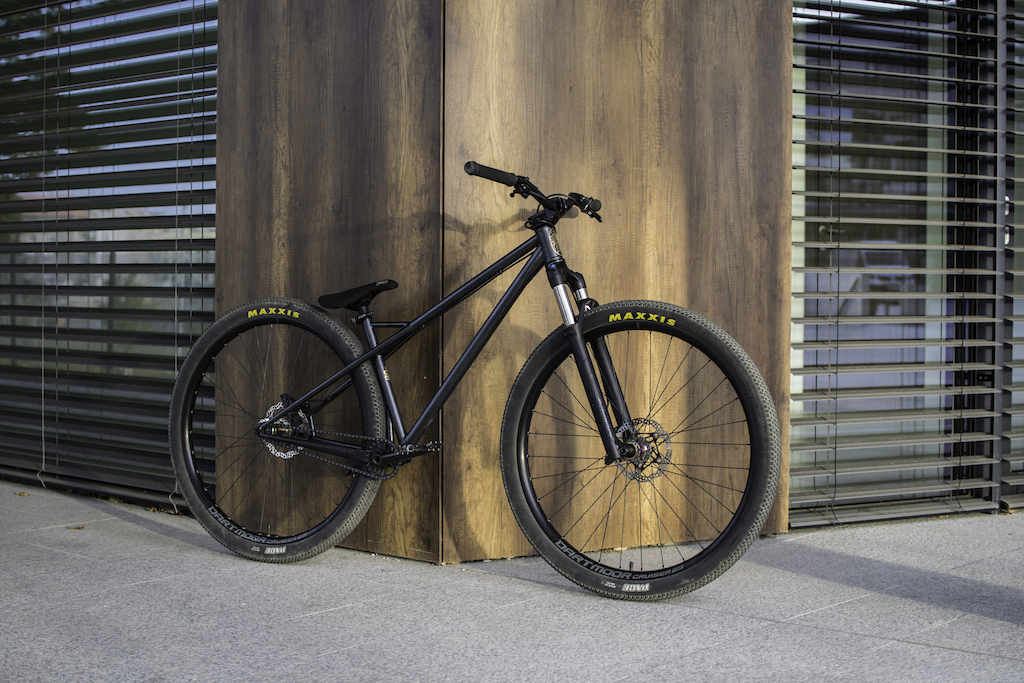 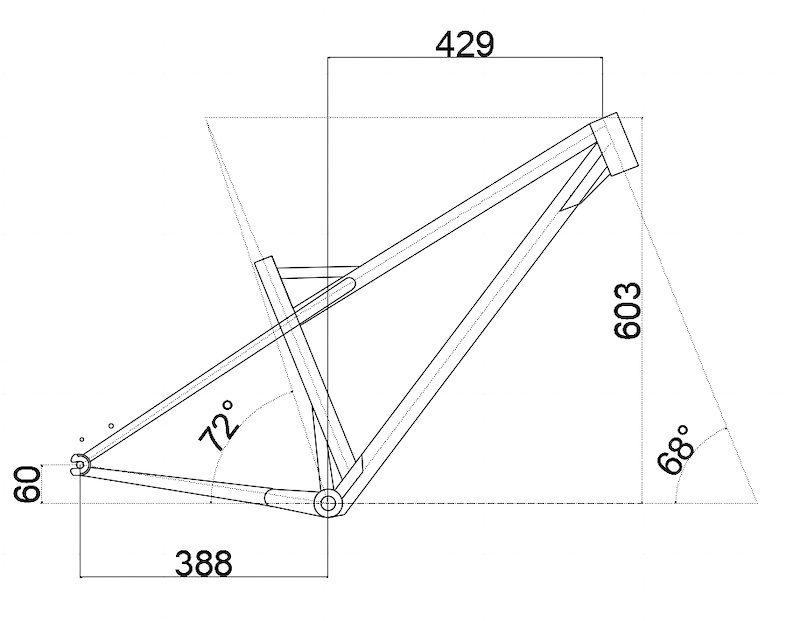 The frame weight is 2,3kg and the whole bike is 12kg. He has no plans to commercialise the frame but could build more up as one-off projects if there are requests. 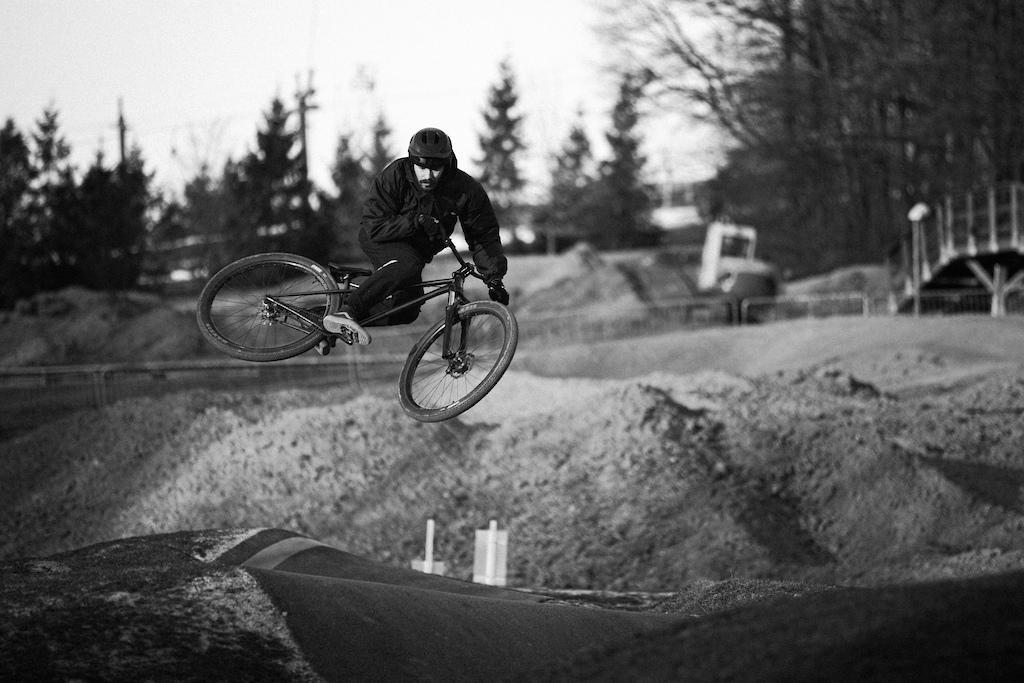 It jumps all the same although we can't imagine it spins as well as a standard 26er.

poundsand (Mar 22, 2022 at 10:26)
In marketing they teach you to capitalize all words when you write meta descriptions that will show up in google search results. Supposedly people are drawn to it more so than when they are non-capitalized. Maybe he works in marketing.

powderhoundbrr (Mar 22, 2022 at 8:50)
But I have been told for years 29 inch tires are not playful and not any good for jumping? Has it all been a lie?
Whats next, Shimano Brakes with a consistent bite point?

Maxcycles (Mar 22, 2022 at 9:46)
Cool to see someone push the envelope a bit, but no thanks. I ride 29” wheels on my trail bikes and have done so for years, but I like smaller wheels for DJ/Park/jibz etc. I don’t understand the MTB industry’s somewhat apparent need to make 29” wheels the answer for every application.

gravitybass (Mar 22, 2022 at 14:13)
It makes sense for MTB, but not for DJ/Slolam/Jib bikes. 29s are great for novices and experts alike. Really glad mullets are getting traction though, as I believe they truly are the best of both worlds (and better for novices, easier to turn, but still stable in tech). This is coming from a previous 29er dickhead. I'm over here wishing someone would come out with a full sus 26er for easy trail riding, jibbing, and DJ as it's hard to justify a dedicated DJ where I live with many huck to flats, but instead we get this thing lol.

Jonahn1234 (Mar 22, 2022 at 10:57)
How to un-dirt jumper a dirt jumper in 3 easy steps. My steel 26in dj is already a pig to 360 on smaller skatepark jumps. I can imagine people who buys this wont be doing any tricks, jumping, or digging (staples of dirt jumping). It'll be rich suburban dads who want a "dirtjumper" for their crappy pumptrack. Also can we stop building expensive pumptracks that get lame within 3 laps and build some proper dirt jumps?

thenotoriousmic (Mar 22, 2022 at 17:30)
Honestly the country is littered with dog shit pump tracks that could just have easy been a skatepark or a set of trails for the anmount of money it cost.

barp (Mar 22, 2022 at 13:37)
Reminds me of that scene in Rocky Horror Picture Show where Janet sees Rocky and says "I don't like men with a lot of muscles" and Frank-n-Furter replies, "I didn't make him for YOU!"

Andrew-Patella (Mar 22, 2022 at 8:45)
Maybe I'm a dumb American with my freedom units, but I'm pretty sure 38mm chainstays like they said in the summary is a little short?

dualcrownscottspark (Mar 22, 2022 at 8:56)
The width of the chainstays is so small too. Just a little flex and it looks like it'd rub. Still a cool bike tho.

tremeer023 (Mar 22, 2022 at 15:23)
@dualcrownscottspark: my thoughts exactly, and bigger wheels flex more than smaller wheels. This must rub the frame in sharp berms.

therealmancub (Mar 22, 2022 at 8:57)
I would think aside from spinning, the other complaint riders may have is how the bike feels on transitions;

I remember seeing a video recently where a rider went from a 26" DJ to a 20" BMX and mentioned that the bike felt way more suited for the location (indoor skatepark) as jumps, transitions and overall spacing of the park was better set up for a smaller wheeled, shorter wheel base bike.

I've noticed a lot of municipal pump tracks and skills parks (DJs) that are built by "professionals" end up feeling like they are designed around 20"-26" bikes, and yet, most of the people who ride them are on 29" MTBs with long forks and longer wheelbases.

Which I think is strange because then everybody who rides them says "I need to get a DJ or BMX" - why not design the park around the bikes that most people have?

Tjameson (Mar 22, 2022 at 9:58) (Below Threshold)
@PHeller: bigger bike=bigger jump which most people without a dj or bmx wouldn’t want to do anyways

jeremy3220 (Mar 22, 2022 at 11:05)
@PHeller: Two reasons. The pumptrack would have to be much larger and longer which cost more money. The other reason is you have much more leverage over short wheelbase bikes to pump and jump. A bmx or DJ would still be better than a 29er on a pumptrack optimized for 29ers.

PHeller (Mar 24, 2022 at 10:15)
Don't get me wrong, I think we need both, but I don't think entire skill areas should be devoted to a BMX wheelbase. My local skills area has a 6' drop, then transitions into a pumptrack designed for 26" short wheelbase bikes. The guys on the dirt jumpers aren't hitting that line, but the guys who bring their DH bikes can't really utilize the pump track.

As far as space? We've got plenty of it. Pump track, dirt jump lines, and a huge skills area that just feels like a pump track with rocks in it. All of it seems like it was designed for 26" wheels or smaller.

naptime (Mar 22, 2022 at 10:40)
Utter shite, if you know anything aboot BMX trails, tracks an P'tracks you'll understand how this bike just won't work for its intended purpose. Unless that purpose is a pointless gimmick, then it'll sell bucket loads cos we all know how much dip shit MTB'ers LOVE the latest gimmicks.......

nico-clement-trailbuilder (Mar 22, 2022 at 13:06)
Less compatibility with transitions and weaker wheels. Every dirtjumper's dream!

26 is dank for street, dirt jumps, slalom, and freeride

BoneDog (Mar 22, 2022 at 10:03)
there is a whole new boomer crowd who think fat bikes are absolutely for shredding, they will love these!

Afterschoolsports (Mar 22, 2022 at 11:04)
Ive had a Sunday High C for a few years now. It’s fun for tooling around between buildings at work, it would make a good pub bike, but take away the reasonable seating position and it’s completely useless. That’s basically what they’ve done here.

wyorider (Mar 22, 2022 at 9:36)
This is a cool proof of concept. I’ll be a production model with a cut out seat tube (think 2000 Litespeed Ultimate) would address a lot of the clearance issues.

For dirt jump and freestyle riding there will always be a place for smaller wheels, but this platform more refined is what I’d want.

Coldspringer (Mar 23, 2022 at 11:58)
Congrats Jakub, you have struck complete terror into pinkbike We don't use 29ers where I live haha, but cool work. I wish I can build frames.

maybenotaprofile (Mar 22, 2022 at 10:56)
But when the Martin Soederstroms of this world get along quite okay with 26" on a DJ bike, I'm not sure it's the wheelsize holding back tall people.

BiNARYBiKE (Mar 22, 2022 at 12:59)
I’m a really tall person and no, don’t want this ever. The wheelsize needs to work with the intended terrain, not just the size of the rider.