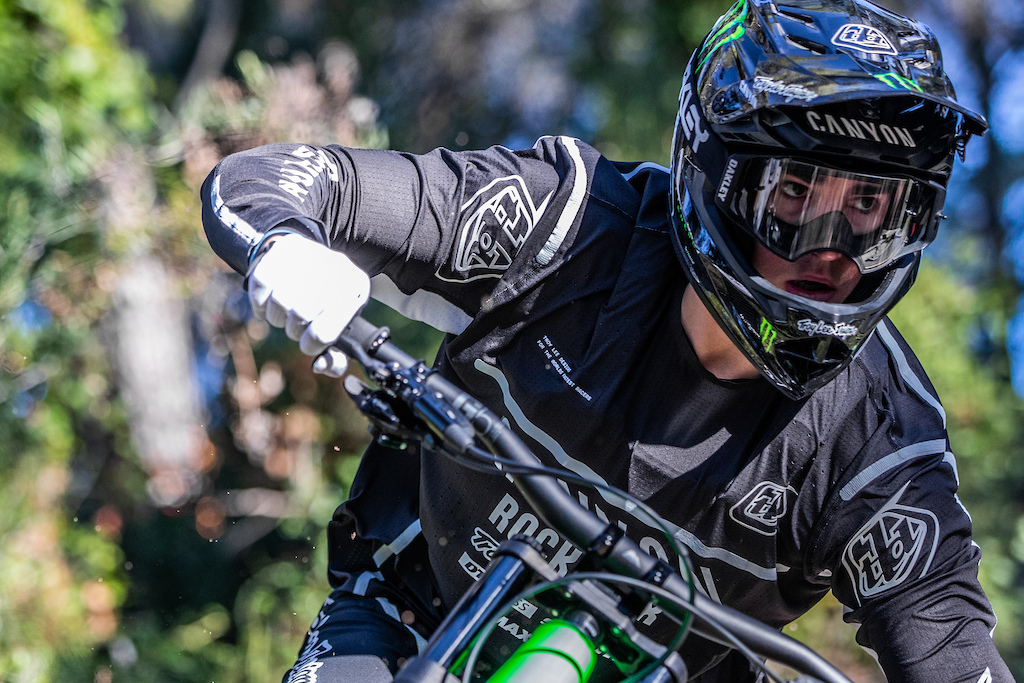 After seven years of riding on Santa Cruz bikes and five for the Santa Cruz Syndicate, 2022 will see Luca Shaw switch things up and begin riding for Canyon instead. Alongside Troy Brosnan and Mark Wallace on the Collective Luca will starting afresh with a new bike, new team and new kit. We reached out to Luca o get some more information on his transfer and what he's looking forward to in the 2022 season.

When I look back on the 2021 season I feel like it was an uphill battle from the start. I broke a bone in my back in March at the Tennessee National and that really slowed me down. I didn't come into the World Cup season prepared and was still finding my speed even a couple races into the season. Later in the summer I started to ride like I knew I could and my results were getting better. Then I had another setback in Lenzerheide and injured my wrist. Luckily I was able to race in Snowshoe and finish the season on a good note!

How did it feel to return to the podium on home soil?

It was amazing. I wasn't even sure I was going to race early in the week because my wrist was really sore and painful. I just really wanted to give it a shot especially in front of the home crowd. So to end up on the podium at the last round was really sweet.

Why did you describe it as the best race of your career?

Coming off a couple really hard seasons, struggling to get my confidence back after little injuries and crashes was a lot harder than I expected. It had been a long time since my last podium and it was just a relief to get back up there. It made it even sweeter to do it in the US. I was also really happy to end my Syndicate career on a good note since I knew I was leaving. That meant a lot too.

Was it difficult to decide to leave a team like the Syndicate?

It was really hard. It's a top level team, the team I had always dreamed of riding for. The bikes and all the sponsors are top notch and the history and results speak for themselves. I honestly didn't ever see myself leaving. Somewhere along the lines I just had a gut feeling that I needed a change to keep progressing and that's what I did. 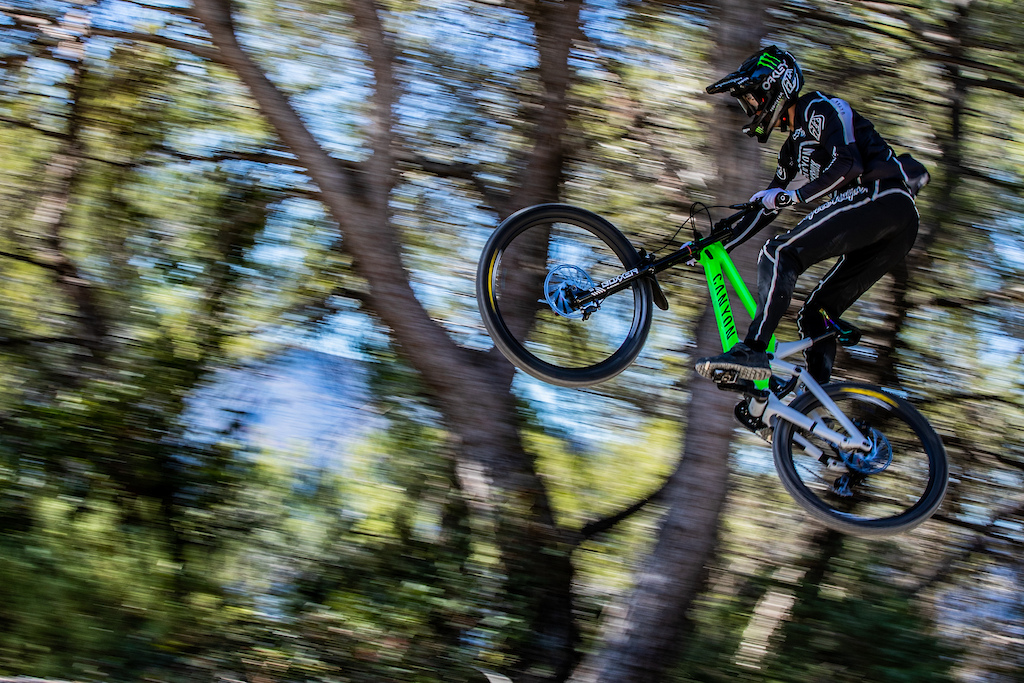 What are your best memories from your time on the Syndicate?

Honestly there's too many. We had a lot of good times and I am so grateful for those awesome years together. I know that we will make some more good memories in the future whether I am riding for them or not, so that makes me happy.

Do you have any regrets from your time on the Syndicate?

I don't have any regrets, I raced as hard as I could and at the end of the day I'm proud of what I achieved with them. In hindsight you can always look back and see things that you would have done differently but I am also glad I had those lessons. Sure I felt like I threw some races away and could have done better, but who doesn't. I don't feel like I have reached my potential yet, I'm still learning a lot each year.

Did you have a lot of team offers to choose between?

I was talking with a few teams. I didn't have as many offers as I have had in the past but I definitely had some interest from a couple top teams.

What made you decide to ride for Canyon?

There's a lot that goes into these decisions but I would say that the enthusiasm from them was a huge part. Obviously they are a proven team and they do things the right way so I knew that it was a great opportunity. They were very excited about the idea and went out of their way to set up a test on the bike as well, that showed me a lot. Gabe and Fabien were both really easy to work with from the start and they really made me feel good about coming on board. Also the chance to be teammates with Troy and Mark was a big one, they are both really good dudes and obviously super talented, fast racers so I think the whole team environment is something that I wanted to be a part of. 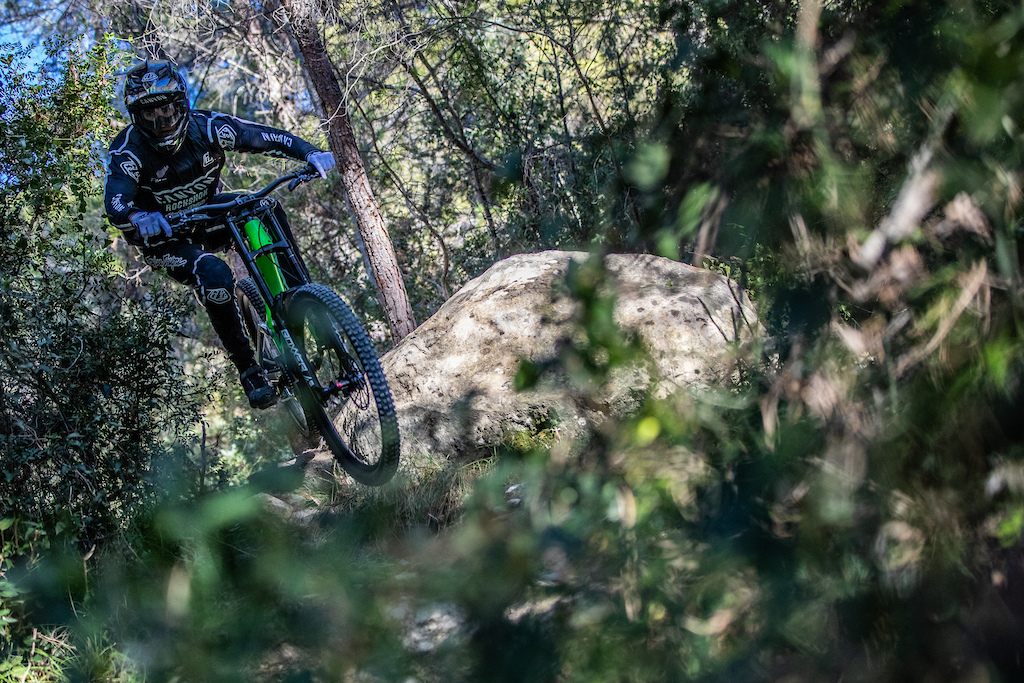 How have you been getting on with the Sender? How would you compare it to the V10?

I am really enjoying getting to know the Sender. Straight away I was super impressed with the balance of the bike and the way the suspension works. I have been riding the V10 for the past 7 years so I was a little nervous about going to a totally new platform but I feel like I am getting to grips with it really well. They are very different, the V10 is a really easy bike to ride and I feel like it's always going to work pretty well. The Sender is a lot more balanced when it's really rough. To me it feels like I can charge a little harder and not worry about going so deep in the travel. I think it's going to be a really good bike for World Cup racing! 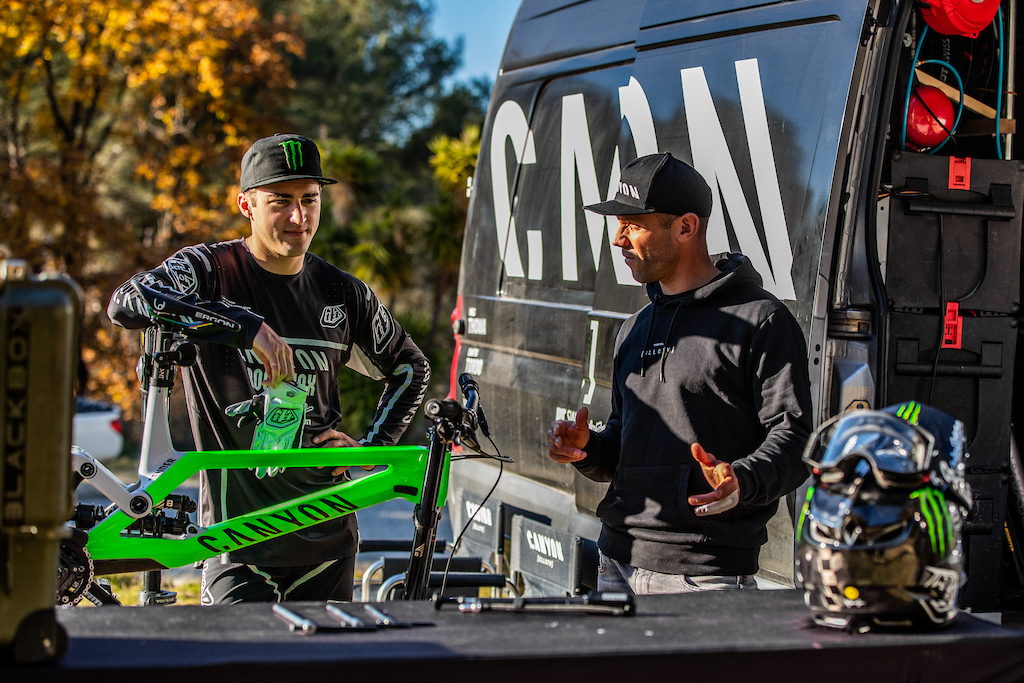 What has been the biggest change so far on the new team?

I feel like with Canyon everyone is really focused on performance and trying to win races. We've already been testing so much in December and everyone on the team is really working hard. That's exactly what I feel like I need so I'm really stoked so far.

What are you most excited about for the season ahead?

I'm just excited to race with my new bike and team! I feel like this change has been really positive so far and it's given me a lot of energy.

What are your goals for the year?

My goals are to stay healthy and be at my best at all the races.

Fabien.... Luca, its the quantum barometer next to the flux capacitor that means the 1mm offset is in fact straight and you can go 3% faster with hydrogen infused nano cells...

Luca.... No idea what he is talking about, get me a coffee

BikesBoatsNJeeps (Jan 13, 2022 at 7:13)
I met Jolanda, Luca, and Walker at the Pisgah Ranger station parking lot and all three were super laid back and very approachable. Best of luck to Lc with Cnyn Cllctv!

Love that he says nothing was wrong with the team he was on. He just felt the need to change directions.
Being comfortable where you are can be great. A simple change of scenery can sometimes be the change needed to spark creativity and passion. Doesn't make where you were a bad place.

I just want to toss out cliche's though:
"The definition of insanity: Doing the same thing over and over but expecting a different result"
"If your butt gets numb, get up and walk around"
"The only thing constant is change"

40apple40 (Jan 14, 2022 at 11:31)
"The definition of insanity: Doing the same thing over and over but expecting a different result"
FYI it isn't. I'm not sure why people keep regurgitating this line. Just not true.

Reignrob (Jan 13, 2022 at 8:52)
Good move for luca. Syndicate was a great team for him but I think a change of scene will ignite the fire in his belly. I feel like he's going to fit really well into the canyon team.

steezysam (Jan 13, 2022 at 13:26)
I always thought Luca and Greg's style was super similar, so it made sense to have them share lines, setup ideas, etc. I do wonder if getting out of the GOAT's shadow will be just what Luca needs, though. The CLLCTV is STACKED!

morpheous (Jan 13, 2022 at 14:39) (Below Threshold)
Cracked frames are predominantly the result of improper suspension setup and tune, so stop bashing, literally

jtorrento (Jan 13, 2022 at 17:26)
Seems crazy to leave the Syndicate, but Canyon is a good brand to align with for a post-pro career business role.

Tigergoosebumps (Jan 15, 2022 at 11:50)
Fortunately, team in mtb’ing is a little different than team in other sports, He’ll be fine and will get over the fact that it will be harder to procure lavender bullits!

danielfloyd (Jan 13, 2022 at 8:58)
Woah, they discovered vowels for this article!!
Below threshold threads are hidden

homerjm (Jan 13, 2022 at 6:58)
SC did not made any changes to the bikes,is in the old school side of DH bikes now. They build very good bikes,but nothing fancy or new relative to many other brands. I bet next year bikes would be the same,you need new challenges to keep the motivation and ridding a new bike would help a lot.

Bobadeebob (Jan 13, 2022 at 7:22)
"Very good" and "not fancy". Literally sounds perfect for its intended use. Although personally I reckon it's a little bit fancy.

jomacba (Jan 13, 2022 at 7:53)
I can't say I agree with your statement. While the V10 has always shared a similar silhouette, the bikes couldn't really be much different in terms of performance. The sender does not have anything in its design that hasn't been done in the past, yes its a highly refined bike. The V10 is no different. The only thing old school about it is the name.

SonofBovril (Jan 13, 2022 at 8:24)
On the contrary, SC has been incrementally refining the V10 for a decade or so now and it keeps getting faster every year...

AllMountin (Jan 13, 2022 at 6:13)
"Somewhere along the lines I just had a gut feeling that I needed a change to keep progressing and that's what I did."

Torbo24 (Jan 13, 2022 at 6:21)
I dont see it as shade directed at the syndicate. I feel kinda similar professionally right now, like i know that i should try something new, but i havent had the courage to do it yet. I do think that we need to expose ourselves to new things to continue to grow in all areas of life

jeremy3220 (Jan 13, 2022 at 6:25)
@Torbo24: I feel like this is the obvious takeaway but people seem to desperately want to find fault with the Syndicate. I guess that's what happens when you're at the top for too long.

Joakinho (Jan 13, 2022 at 7:42)
I think this is completely relatable to our normal works lifes. It's hard to keep yourself always motivated, sometimes you need someone putting a carrot in front of you... sometimes. Maybe the relax way of the syndicate, leaving them to be themselves, is not for everyone.

pisgahgnar (Jan 13, 2022 at 8:42)
@jeremy3220: People want to find fault with the Syndicate yet they cheer Laurie and Jackson moving there. @Torbo24 is totally right. It takes courage to make a change from something that may feel comfortable, and that change may allow you to grow by opening your eyes to new ways of performing.