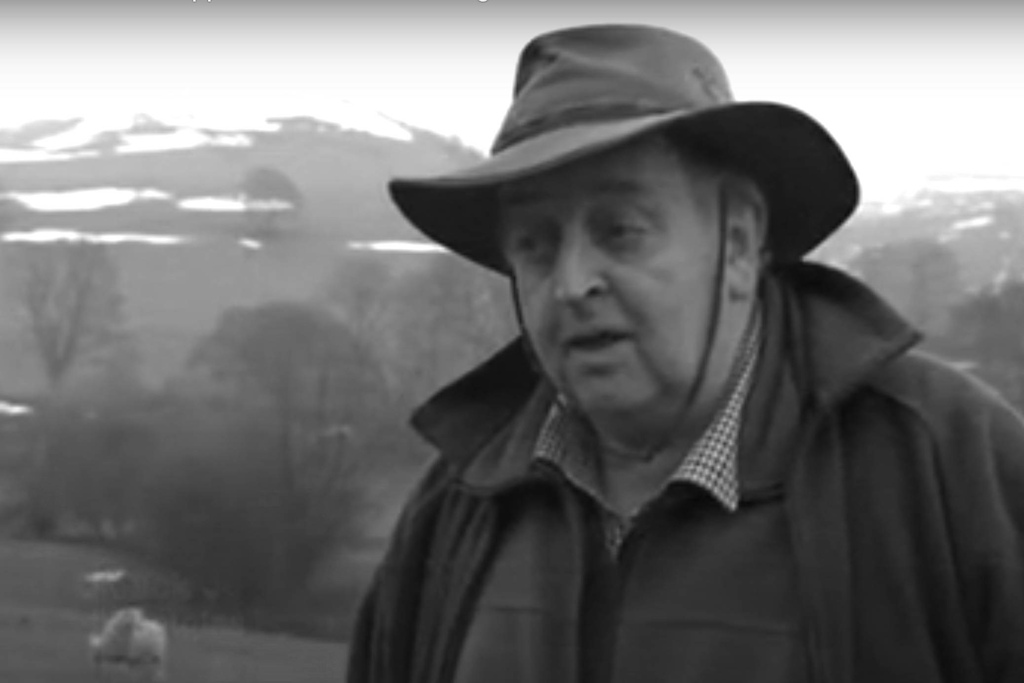 Jac Jones was the landowner of Moelfre downhill track. Designed by the Athertons as a World Cup training course, it quickly became one of the essential venues on the British domestic circuit and would later host the British Championships for 4X, cross country and downhill. Following the tragic news of Jac's passing that broke at the start of this week, we reached out to some of Jac's closest friends to share their memories and experiences with him.

Father, Husband, Farmer, Land Owner, Land Rover Driver and Pipe Smoker.
Written by Si Paton
You have to go back to 2003 and the last national of the UK National Downhill series for Jac's first involvement with mountain biking. The series was in desperate need of a venue at the last minute but the Athertons had been working their magic on the open hillside and Jac pulled out all the stops and let us go racing. 221 racers hit the start line that day including myself and over the following 15 years, there have been 34 races and over 7,000 riders going anytime after the beeps.

We can not underestimate the significance and gratitude we must hold for Framer Jac and the use of his land, and that of fellow landowners. Firstly trusting race organisers and local riders to go and carve up their hillside and woodland, swinging axes, chainsaws, mattocks and perhaps the final straw, plant machinery (JCB/Diggers). Now add in 300 plus unruly mountain bike racers and who knows how many spectators, the destruction of the camping field on a wet weekend and I certainly do not want to mention the litter that is discarded.

For Jac, nothing was ever a problem. He would drive over during race set up in one of his old Landys that was held together by orange bailing twine and his trusty old pipe hanging from the corner of his mouth. Anything that you ever asked of him, the answer was always a big fat "yes"!

Jac really cared about the races and the riders, I personally think this came about from a great tragedy that Jac and his family suffered with the loss of his son at an early age during a driving accident. Allowing us free reign on his land, seeing us all enjoying ourselves, this was his way of giving back and gave him a lot of enjoyment and hopefully some peace.

At the end of each BDS race at Moelfre, Jac would be there at presentation time handing out the medals and prizes and giving the deserved rider his handshake and a genuine, "Well done'". He would then always offer to say a few words before we got to the Elite podiums. What I will always remember him for was when he said, "That hill's getting no smaller but you boys and girls seem to be coming down it faster and faster each year".

We have a lot to thank you for Farmer Jac, you will be missed but never forgotten. Love and Peace.

tabletop84 (Dec 11, 2020 at 4:07)
I remember him from that old arheton video. Sadly a not common attitude from landowners. People like this are really important for our sport!

dave6797 (Dec 11, 2020 at 18:04)
Such sad news, I used to help organise the uplifts with mtbuplifts. Jac would always come down to our shed, hang around for a cup of tea and some biscuits. Hanging around for atbleast 20 minutes while his tractor was full of riders waiting. But it would never phase him. He would swing into his land rover, stack the old pipe up and away he would go, nice 'n steady. Whenever we wanted to do any work to the track he was always keen. He would sort out diggers and haul things around for us. He always had time for people, he was always busy, and always had work on. Genuine great guy, we could all learn something from his approach to friends. You will be truly missed Jac. Rest easy

sewer-rat (Dec 11, 2020 at 4:11)
What a top guy with such a dry but great sense of humour, always dragging out stuck cars and doing his best to make people smile, I cherish those Moelfre uplift days RIP ya legend

That video brings back a lot of good memories

fruitoftheloam (Dec 11, 2020 at 4:37)
What a venue. OK, by today's sky high standards Moelfre isn't much in terms of technicality but what it lacks in that regard it makes up for in its place in UK Mountain Bike legendary. More than that though, our sport is founded very often on the selfless actions of those who own the land on which we ride of which this man was one.

bigbluebike (Dec 11, 2020 at 6:32)
Best BUCS Student Champs ever at Moelfre before the splitting up of the XC and DH. Good memories and would have never been possible to have 700 pissed up students on there if it weren't for that man.

What? why would he need padding? Clearly had the skills to pay the bills.

wake-n-rake (Dec 11, 2020 at 7:17)
Sad news for sure. Great to see Pinkbike posting such a tribute on their front page though. Hopefully it'll get passed on to family and friends of his.

si-paton (Dec 11, 2020 at 7:57)
I spoke to his wife yesterday who was with thier daughter and told them both exactly what we were doing and they were both happy we were publishing this.

browner (Dec 13, 2020 at 5:23)
What a race. Remember it like it was yesterday. Horrible uphill but some lovely slidy fun on the way back down

secondbestbike (Dec 11, 2020 at 7:28)
Very sad news. Nothing was ever too much trouble for Jac. For years he has shuttled trailer loads of our schoolboys to the top of his hill. We always had a blast. Such a nice guy. RIP Jac.

stevew9999 (Dec 11, 2020 at 13:43)
I had to sign up to comment when i read this sad news. I only met Jac on a few occasions. I never rode the downhill track (I'm not good enough!), but flew my paraglider there many times. Jac was held in really high regard by the paragliding community too. Allowing us to fly from the Gyrn was generous enough, but if he was running an uplift day, he'd always stop to give us a lift to the top, saving us the pain of carrying 25 kilos of kit on our backs up almost 1000ft of steep hillside. RIP Jac, you'll be sadly missed. Thoughts go out to his family at this difficult time.

melonhead1145 (Dec 11, 2020 at 4:39)
Did quite a few races at moelfre back in the day, a classic venue and always well run. It seems to have fallen out of favour recently, but the track was flat out and open from top to bottom and I loved it. RIP Jac

betobi (Dec 11, 2020 at 4:53)
what a legend and so sad to hear. I really thought he'd hit that huge jump in one of those earls atherton vids, but even though I've found out it probably wasn't him, I still remember farmer Jac. What a guy.

EnduroArmy (Dec 11, 2020 at 12:32)
Ah what a shame. Great bloke, top character. He let us Army lads ride there a few times for training camps, uplifting on a massive open trailer on the back of his tractor. RIP Jac.

sarahrobyn (Dec 11, 2020 at 16:15)
RIP Farmer Jac. Moelfre was one of the first places I rode dh and then went on to race there many times, it was one of my favourite places to ride. From the first time I was there Jac always took an interest and wanted to know how your run was. He will be missed.

LowriWilliams (Dec 13, 2020 at 14:30)
Thank you Si, Dan, Gee, Rach, Belks and all of you for such kind words about Dad. Mam, Nia and myself would like to thank you all for comforting us during this difficult time. Dad simply loved his land and seeing you all grow a part of it ❤️ His funeral will be held at Llansilin Church at 11am on Monday 21st December. Due to current restrictions this has to be a private family funeral but mourners are free to stand outside as he takes his last journey past Moelfre Hall, Pantglas and to his resting place at Llangadwaladr church following this short service. We hope to hold a celebration of his life post Covid. Diolch yn fawr, Iona, Nia & Lowri x

RideSlovenia (Dec 11, 2020 at 8:03)
Great memories working and riding at Moelfre. Jac was a legendary host. I am glad he enjoyed having us around. The top of Moelfre on a sunny day is one of the finest places you can be.

gravitysgirl (Dec 11, 2020 at 9:01)
I spent some time living in North Wales about 10 years ago, and the attitude of a few landowners up there, including Farmer Jac was so refreshing compared to where i'm from in England. Moelfre Steep tracks were flippin mega too. RIP Jac, thanks for everything.

Knollyp (Dec 11, 2020 at 5:25)
Pinkbike always honorable to its community! He sent that huge gap like it was nothing ! Check the video

JoeyBratten (Dec 11, 2020 at 5:28)
RIP Jac, great bloke, such a grandfather figure, genuinely interested in everyone's experiences getting down Moelfre!

access104 (Dec 11, 2020 at 13:44)
Wish you well Farmer Jac, talked to you several times at the races on your land and you always had time for people and was a true gent, hope you have gone to a better place

peterknightuk (Dec 13, 2020 at 1:35)
Very sad to hear. If everyone in the world was more like him it would solve a lot of problems. I loved that edit back in the day and now I think it's a fitting tribute to the chap.

thingswelike (Dec 11, 2020 at 5:01)
That video is an absolute classic! Can't believe it's been that long. Sounds like he was a huge asset to the local area and to mountain biking. Rest in Peace Farmer Jac

BMXrad (Dec 11, 2020 at 6:47)
I remember when they had the national DH, XC and four cross at the same weekend was epic many thanks Farmer Jac.