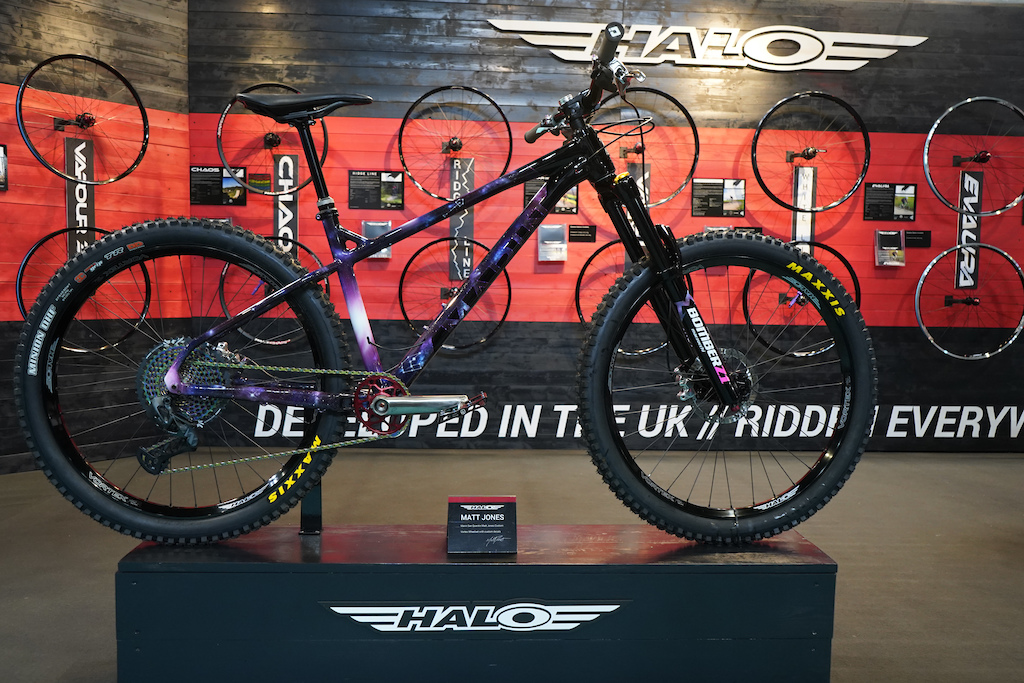 Matt Jones is currently in North Wales feeling out the Hardline course, but when he gets back, he'll have this custom-painted, jewel-encrusted Marin San Quentin waiting for him. The bike is a 130mm-travel hardtail with an eye-catching space-themed color scheme and not a sticker in sight. It was painted especially for Jones, who's a self-confessed science nerd, and then he specced it with his dream parts.

What really tops this build off is the stem cap that contains real diamonds and rubies in the shape of Matt’s initials, making this easily the most expensive bike at the show. 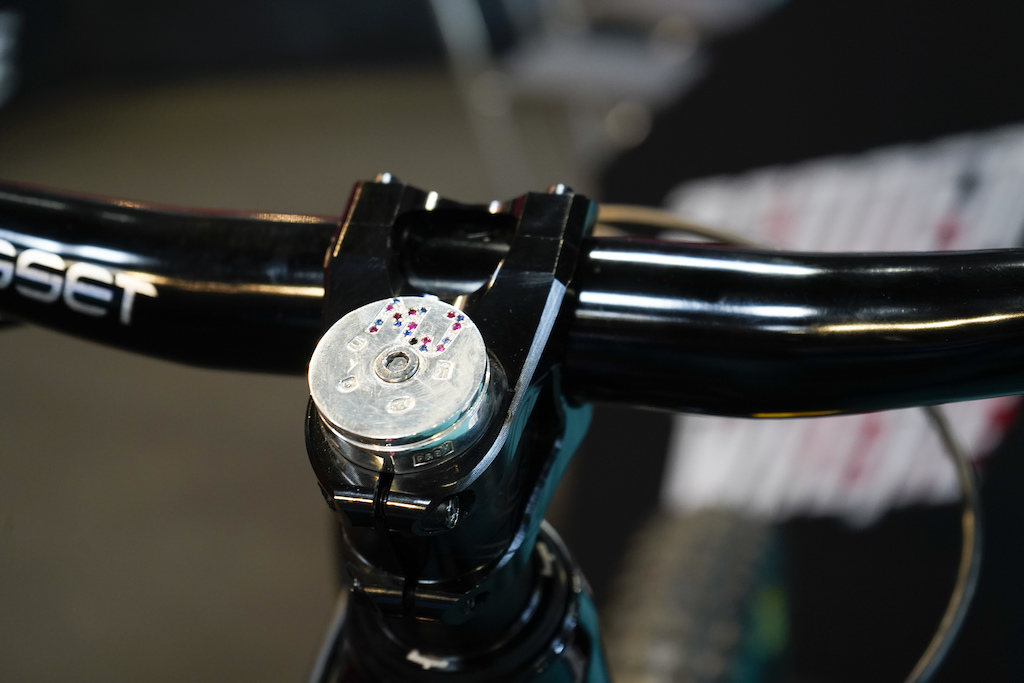 There are apparently 26 real jewels in the solid silver cap, so they'll have to keep a close eye on it over the weekend in the NEC.

Matt Jones was part of the team that developed the San Quentin, as he was looking for a more trail-friendly version of the Alcatraz dirt jump hardtail he also helped the brand to produce. The result is a British-style long and slack hardcore hardtail with a low standover to replicate a dirt jump bike feel. 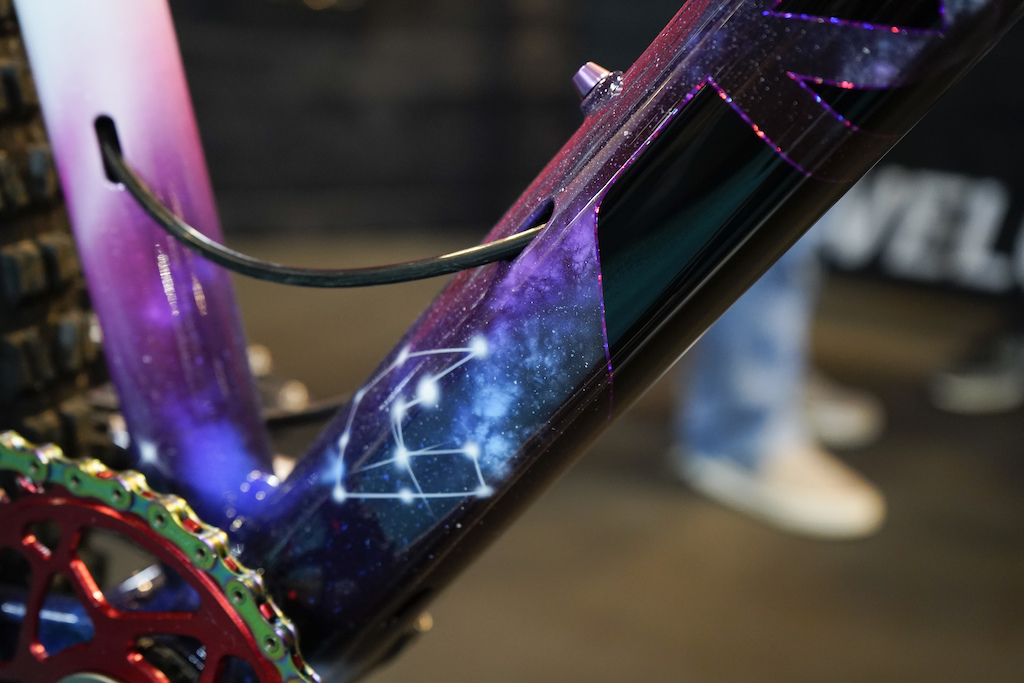 Other constellations in the Jones nebula include the Spade and the Bike Frame. 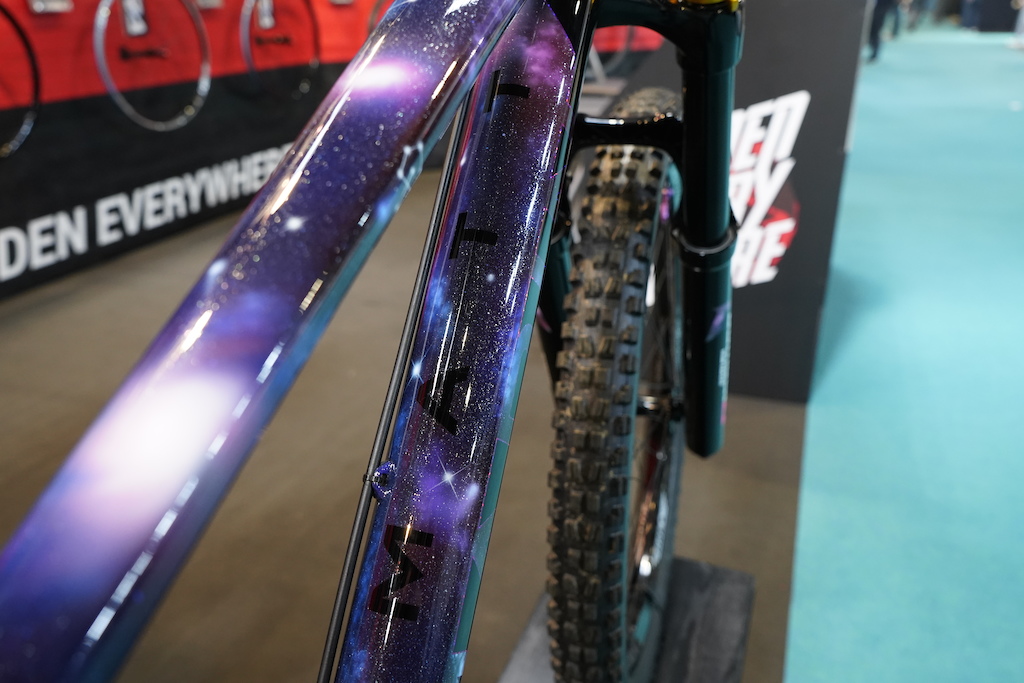 Matt's custom bike was specced with an AXS Eagle drivetrain, Cane Creek eeWings cranks, a Gusset cockpit, TRP G-Spec brakes and a Marzocchi Z1 fork. This has been called the 'dream build' edition, one that you can't buy, and probably never will be able to, but in an ideal world, this is about as plush as a Marin San Quentin is going to get. Finishing off the build are Halo's new signature Matt Jones wheels. As far as we can tell, they are the same as the regular Vortex wheel, but they're shiny and you can now get a Matt Jones sticker on them. 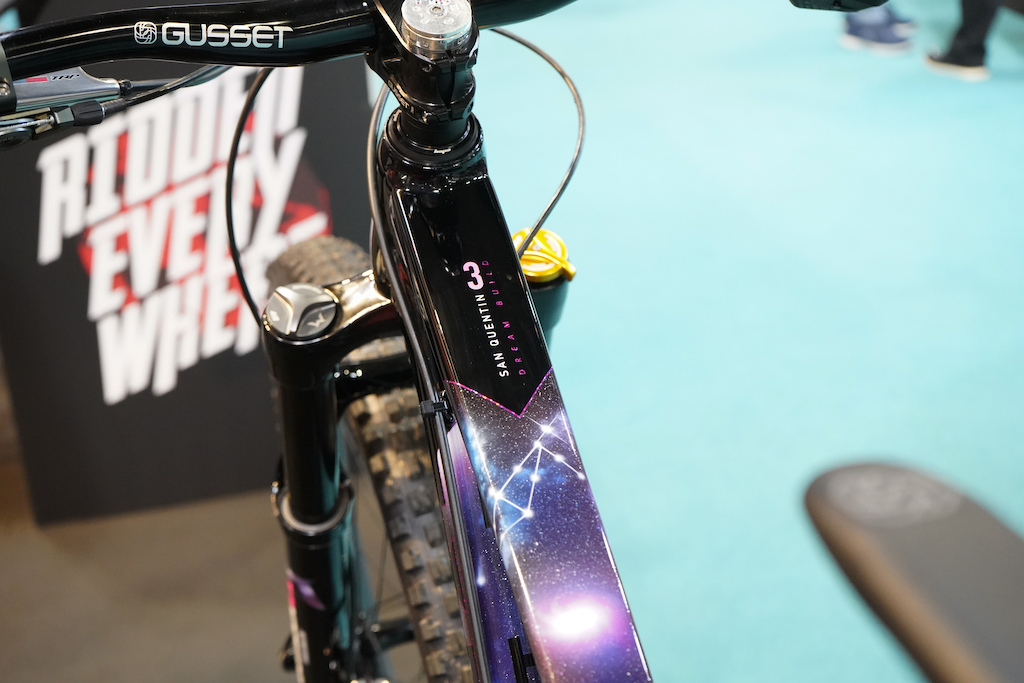 The paint job from Image Design Customs is simply unbelievable. So nice that we'll ignore the fact the tire is the wrong way round. 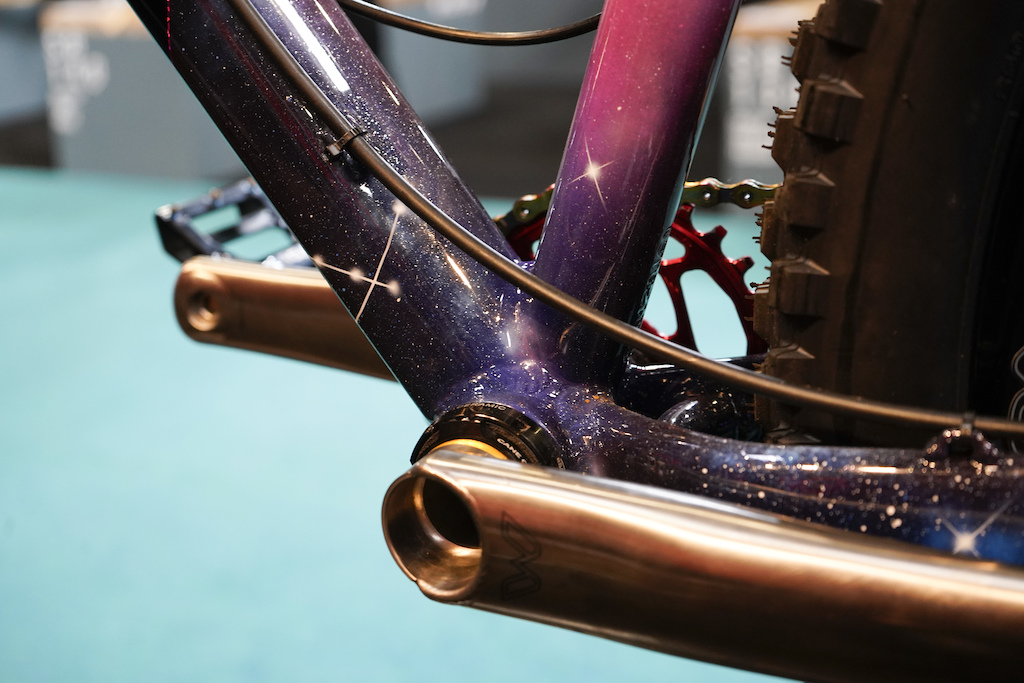 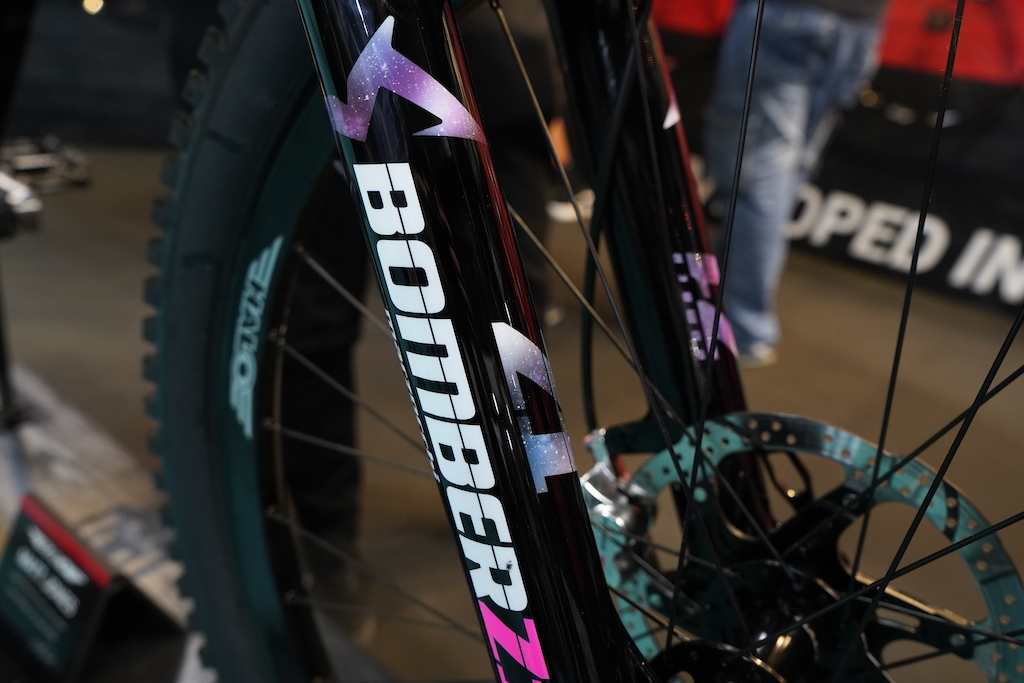 Red no more. The Marzocchi fork gets the space treatment, too. 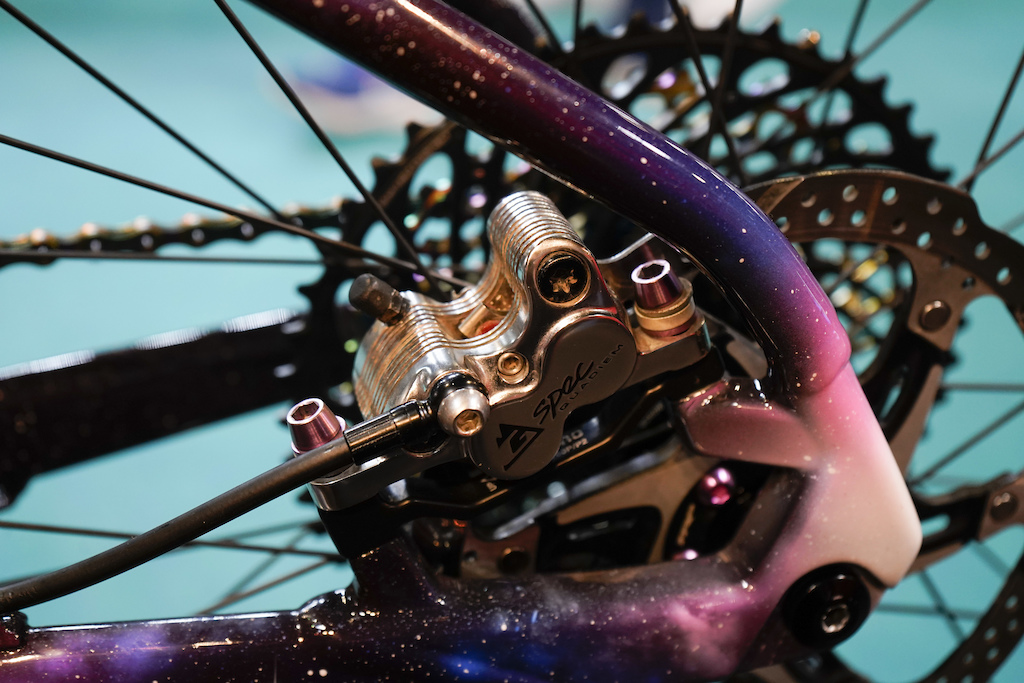 It's the little things, like these matching purple titanium bolts, that make this build really come together. 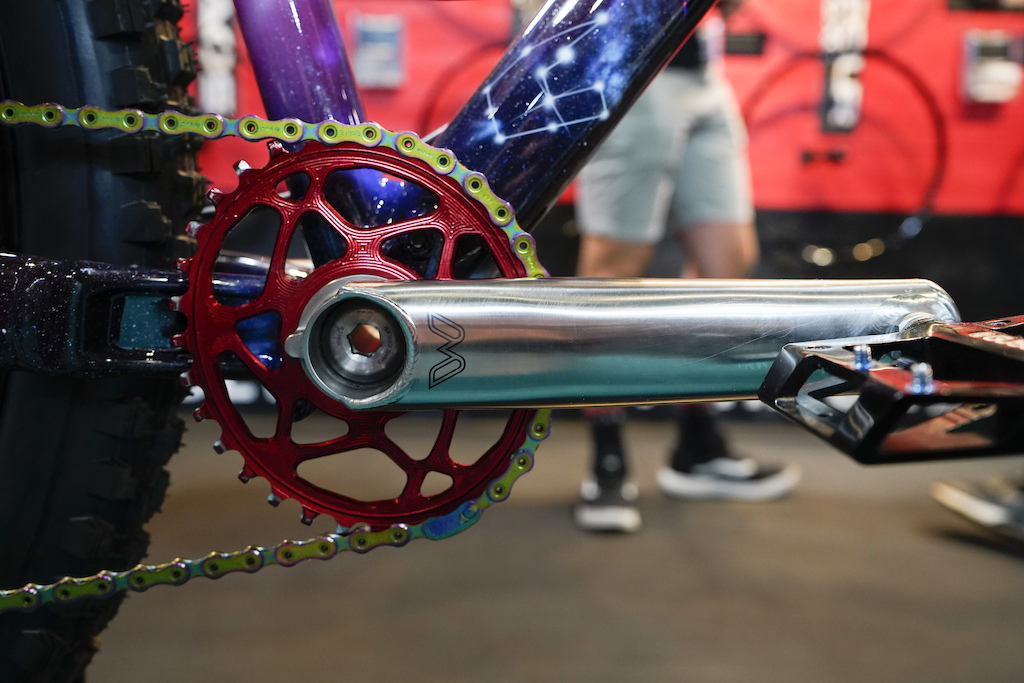 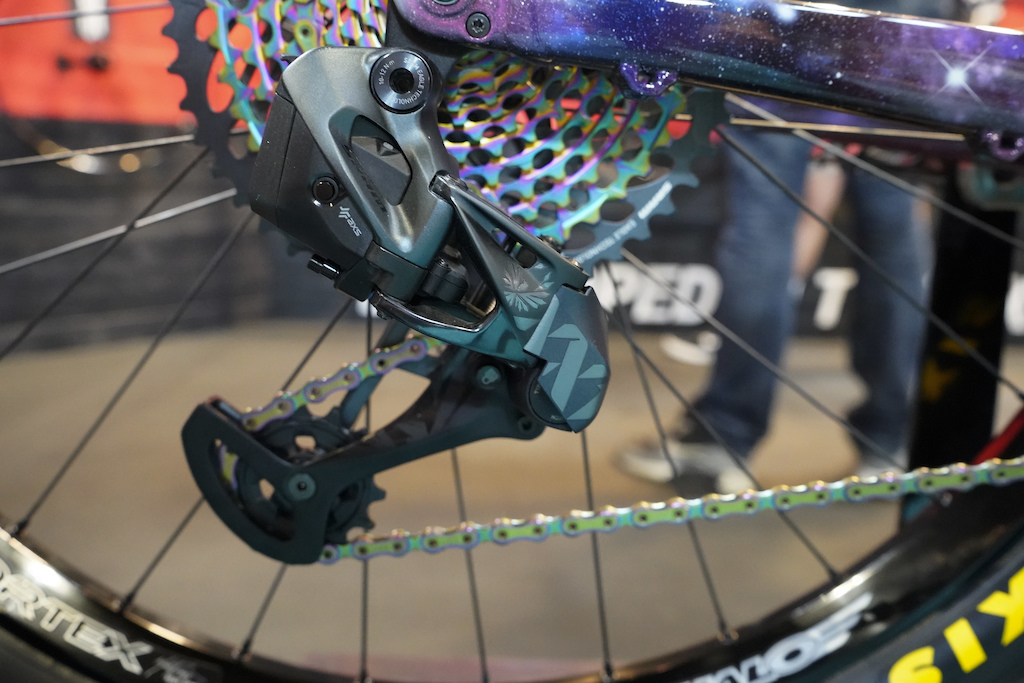 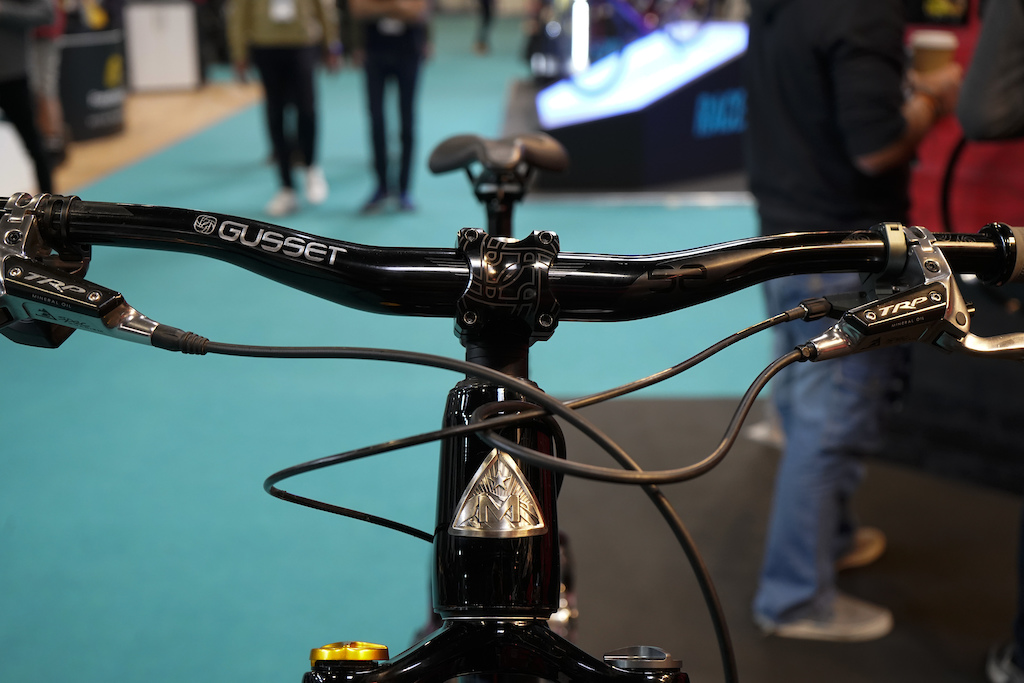 A Gusset bar and stem keep the dirt jump feel for Matt.

DirtbagMatt (Sep 12, 2019 at 16:35)
Right?! Did they forget to polish it or something? And how about the placement/kerning on the MJ initials... weak effort.

The paint job is an amazing work of art

landscapeben (Sep 13, 2019 at 8:39)
@lognar: Didn't sound that way from the description but you're probably right. What a shame though to stick on such exotica and then lump on some cheap underperforming forks!

suspended-flesh (Sep 12, 2019 at 16:11)
Seems like the San Quentin should have the most drab. bleak, and hopeless paint job imaginable. Maybe a Living Hell edition.

shredgnar85 (Sep 12, 2019 at 18:36)
@Mlloyd550: I see green Audi A5s, bright red Ferraris, pimped-out G-Wagons, and everything in between on a daily basis. Not to mention some of the most ridiculous bikes the world has ever seen.

TheR (Sep 13, 2019 at 11:21)
I sprinkle diamonds on everything I ride, two reasons: one, it's the most baller shit you could possibly do to your bike and two, makes my dookie twinkle, man.

generationfourth (Sep 12, 2019 at 16:31)
Didn't really know who MJ was until I stumbled upon his YT channel. Even though he is sponsored by Marin and had a hand in designing the San Quentin you can tell he really loves riding this hardtail.

msusic (Sep 12, 2019 at 16:14)
All that money wasted on bling, so they couldn't afford cable stops or something other than plain zip ties to hold the cables to the frame.

senorbanana (Sep 12, 2019 at 16:33)
I understand the problem of no grommets, but cable ties are the best way to fix cables to a externally routed frame

My guess is that he didn't get sponsored parts because this is a "private" project. The Marzocchi fork and the dropper are just way cheaper than a Fox36 and AXS dropper.

Martynich94 (Sep 13, 2019 at 6:42)
@Leicester: marzocchi is owned by fox. Fox want their riders running all of their products from their brands, for the marketing value. If nobody sponsored by fox ran marzocchi, then the brand marzocchi simply would not have the marketing exposure.