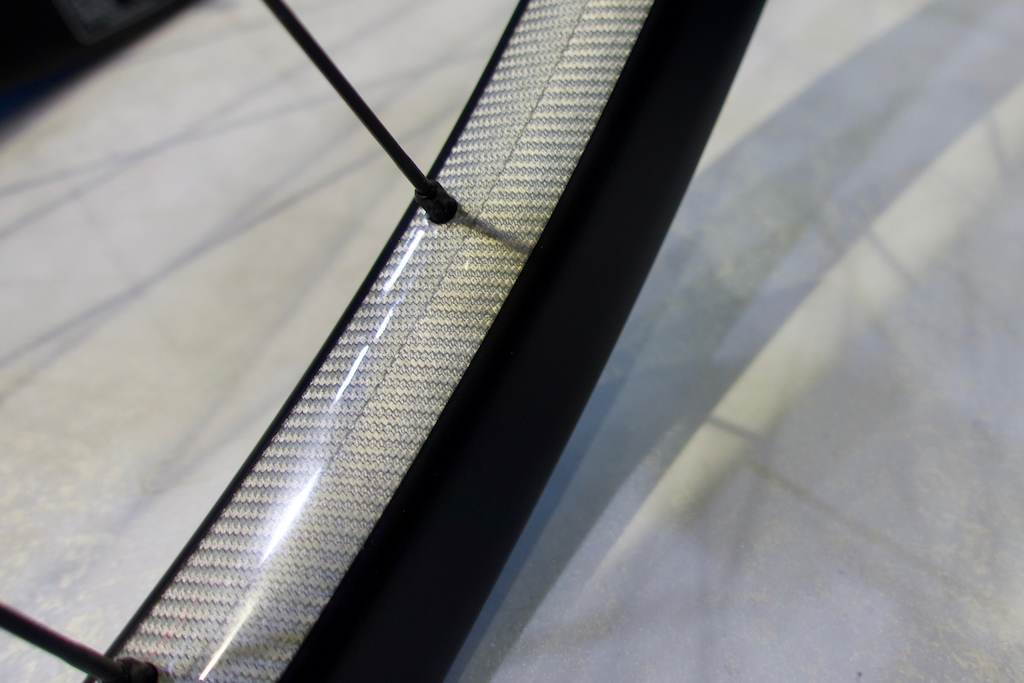 Mercury Wheels have been an under the radar brand for about ten years but they are hoping to burst onto the scene in a big way with their new mountain bike wheelsets that feature a mystery material called Fiber-X.

The American brand have incorporated a strip of the material in the middle of the rim and it is apparently two times as strong as carbon but also more ductile, solving the main two problems Mercury sees with carbon wheels - impact resistance and stiffness. All impacts on the wheels are channeled towards the strip and it is apparently able to absorb them far better than a normal carbon rim. 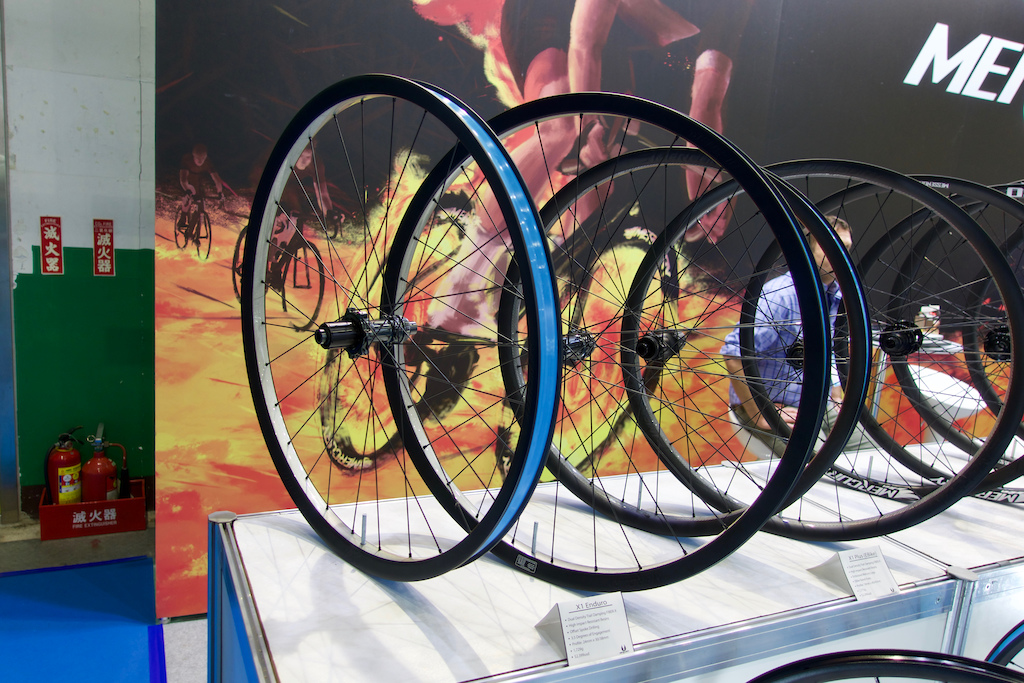 The Fiber-X could have been any colour but Mercury went with silver to fit in with the brand name and stand out from the competition.
So what is the material? Well Mercury says that it "absorbs like Kevlar on steroids" and can resist a double impact of 120 joules but they flat out won't tell us what it is. We do know that it is a material that is widely available on the market but by keeping it a secret Mercury are hoping that they can stay one step ahead in the competitive world of wheel manufacturing. 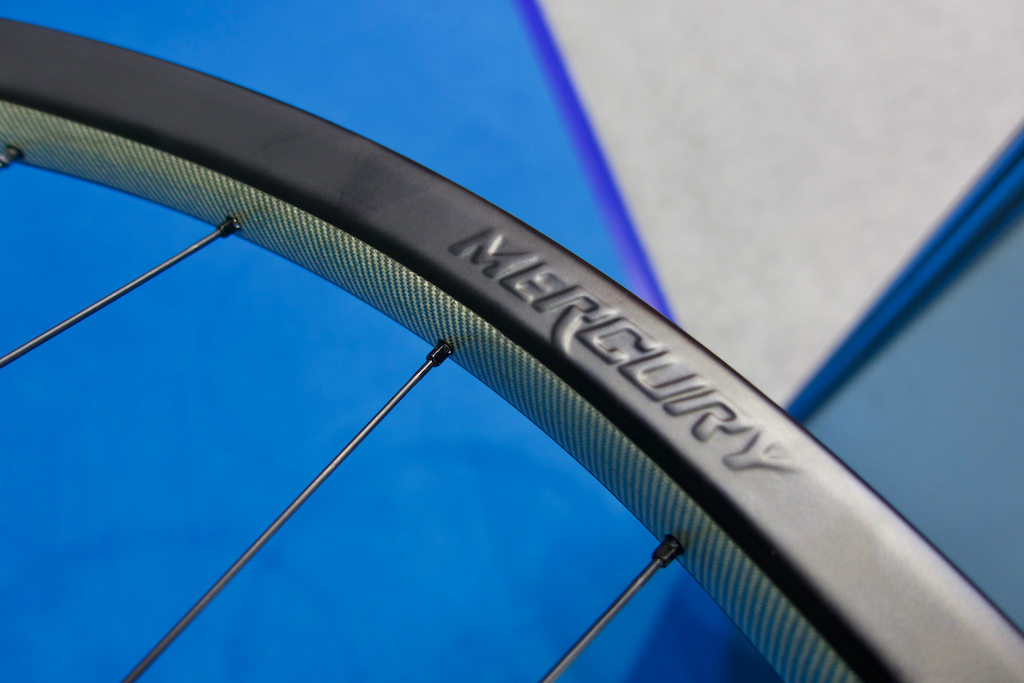 Embossed logos mean no decals and a super premium finish.
The technology is currently only available in Mercury's X1 wheelset that are available as either an enduro or ebike version in 29" or 27.5". The enduro wheels have a 30mm inner width, 38mm outer width and 24mm depth. The wheels also use Mercury's own hubs that have a 6 pawl system with 3.5° of engagement. The wheels weigh 1,729 grams (29") and retail at $2,399USD for a pair.

pacificnorthwet (Mar 29, 2019 at 0:23)
I'm guessing it's either just fiberglass or a fiberglass blend, but no matter what it is I'm curious to see how it works out. Always refreshing to see something different (Even if there is no way I could afford it).

WAKIdesigns (Mar 29, 2019 at 1:48)
Or maybe just alutex... I would love a company to make a frame for me covered with it. bejesus it would be glorious

chrissangwich (Mar 29, 2019 at 11:28)
Maybe its Dyneema? Pretty sure that's the strongest available fiber at the moment.

vinay (Mar 29, 2019 at 12:31)
@chrissangwich: Could be. Dyneema is also some kind of aramid, isn't it? I used to have lectures from someone from Akzo who was working on the material.

I think that boron is more brittle than carbon for an equivalent strength, which might explain why it's not being used at the bead edge, but I guess we'll see!

Don't think dyneema is great under compression? Anybody wanna weight in there? I think it's similar to Kevlar in that it's a "tension only" material.

vinay (Mar 29, 2019 at 13:37)
@enki: No, it doesn't like compression. But the resin typically shrinks a little when it cures so this subjects the fibres to a little bit of tensile stress. As long as the air chamber (tire) is pressurized, the whole composite will be subject to tensile stress though of course the worst case to be prepared for is a flat tire. The thing that always worries me most with these composite rims (carbon or whatever we have here) is the walls being perforated for the spokes as if it were aluminium. I don't know how the loads are transferred in there but this matters a lot.

charlemagne (Mar 30, 2019 at 14:29)
@WAKIdesigns: Looks like some form of Alutex, or a GLARE composite to me. And the values for twice as strong make sense, although not in the ways you might expect. Carbon can have a tensile strength of 3.5GPa, and the GLARE stuff can be 6.2GPa, not quite double but close. Plus it has super good impact resistance, like they use it on planes to contain explosions from terror attacks.

vinay (Mar 31, 2019 at 0:29)
@charlemagne: Glare is a aluminium-glass fibre laminate but it is a stack of layers, not an impregnated weave as you see here. The outer sheet is just aluminium so that's what it looks like, aluminium sheet. I happened to study at the faculty (Delft University of Technology, faculty of aerospace engineering) back when they were developing the material so I was bored to death with the stuff

vinay (Mar 29, 2019 at 4:40)
This is one of those times you want to talk to the designer. You want to increase impact performance? Which part is subject to impact, the center channel or the rim bead? What material is the rim bead? I need answers to those questions before I can start trolling.

pakleni (Mar 29, 2019 at 0:29)
I was thinking the same. At least some sort of it.
Coming from the sailing world I'm used to see/try/sail/work with hi tech materials years before they become standard in cyclyng world. Same was with kevlar, carbon and titanium

R-trailking-S (Mar 29, 2019 at 5:15)
Dyneema and spectra have the same problems as polypropelene- creep. Which means neither is good for fixed rigid structures.

neons97 (Mar 29, 2019 at 7:07)
"by keeping it a secret Mercury are hoping that they can stay one step ahead in the competitive world of wheel manufacturing"


And by keeping it a secret, they will also stay many steps behind their competitors in sales....who is going to pay $2,400 USD for a wheelset from a little known company, using an unknown material on an unproven wheelset? And for one of their first offerings to be for an e-bike sends a very strong message as to who they feel are their target market.

WAKIdesigns (Mar 29, 2019 at 13:00)
E-bikes have motor (Tadaaaa!!!) They can easily support 600-650g rims. A quality alloy rim in that weight is so strong, that making one out of composites is only for people who are more into having a wheelset made of composites rather than having a strong, reliable wheel. Considering E-bikes are heavy and dictate "plowing style", using composites for wheels which are hit into stuff more than a lighter bike, is purely impractical.

Compositepro (May 5, 2019 at 9:57)
could be kinetic energy , however if heat energy a snickers is 19,500 Joules which means the rim is actually a bit rubbish

sledMXer (Mar 29, 2019 at 19:36)
My wife got Mercury wheels on closeout for half-price (thanks Backcountry.com!) and they have been ABSOLUTELY bombproof! I have Nox Composites on my bike and they have been worry and problem free too...except I did have a couple of incidents with bot rear wheels.

Basically her rear wheel got run over by some jackass in an F-150 in a parking lot (he looked in the mirror and gunned it, so he knew he did it) and I evidently slammed a rock too hard on mine and cracked it (even with Huck Norris). I have to say the Mercury had less damage to the actual rim. Mine was still good enough to ride for a couple days, but wouldn’t hold air to run tubeless. Anyway, both companies replaced them with my proof of purchase.

nmcmillan (Mar 29, 2019 at 19:59)
I’m already running these wheels and I’m not sure of the science and magic behind them but I can’t attest enough to the performance of them. I’m running the previous gen + enduro wheels on another bike and also have the previous gen x1’s on a Rocky Mountain maiden. Currently torture testing this wheel in st. George Utah, I highly recommend these wheels.

sq225917 (Mar 29, 2019 at 12:30)
If it is genuinely stronger than carbon and more ductile then it can only be Dyneema. But honestly it looks more like one of the many aluminized carbon variants.

Yetiboyblue (Mar 29, 2019 at 19:05)
Dyneema absorbs energy whereas pure carbon transmits it from what I just read.