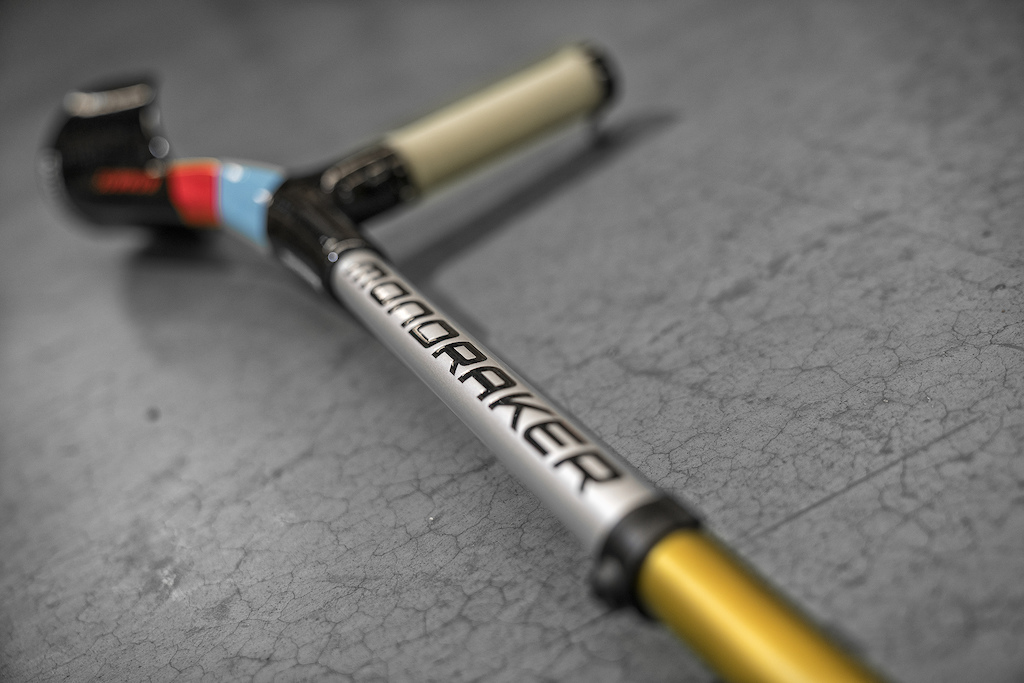 Just over a year ago at the Mont Sainte Anne World Champs, Brook MacDonald suffered a potentially career-ending crash. Left on the hillside for 5 hours before being evacuated, he describes it as the worst day of his life but he was determined to not let the crash stop him and has made an amazing recovery. He'll be kitting up and heading up the mountain for the first downhill training session this afternoon before taking the start line again on Sunday for a crack at the Rainbow Jersey.

To celebrate his incredible return to racing, Monraker created him a pair of custom crutches as a symbol of their support following his inspiring recovery. Of course, while it's hoped that he won’t ever need to test ride this custom piece of kit, the crutches do come with a whole host of enhancements compared to the stock model he used during his rehabilitation. The handles feature Renthal double lock-on grips for better control in technical conditions, the long, slack, and low Forwalk Geometry adds some much-needed stability and the stanchions are even Kashima coated. 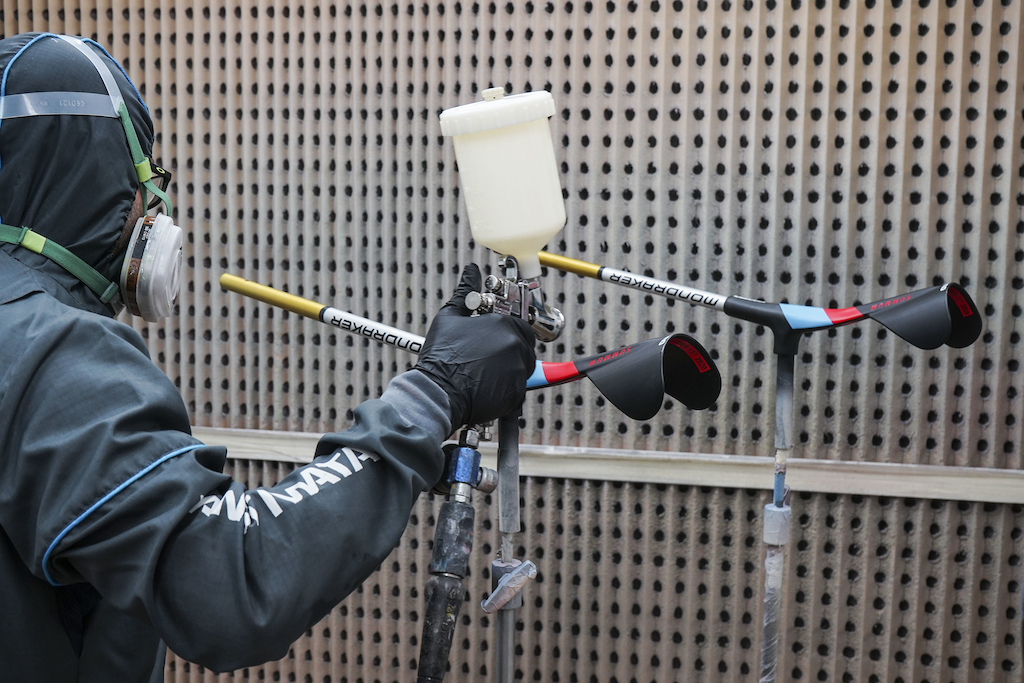 The crutches getting the factory paint treatment 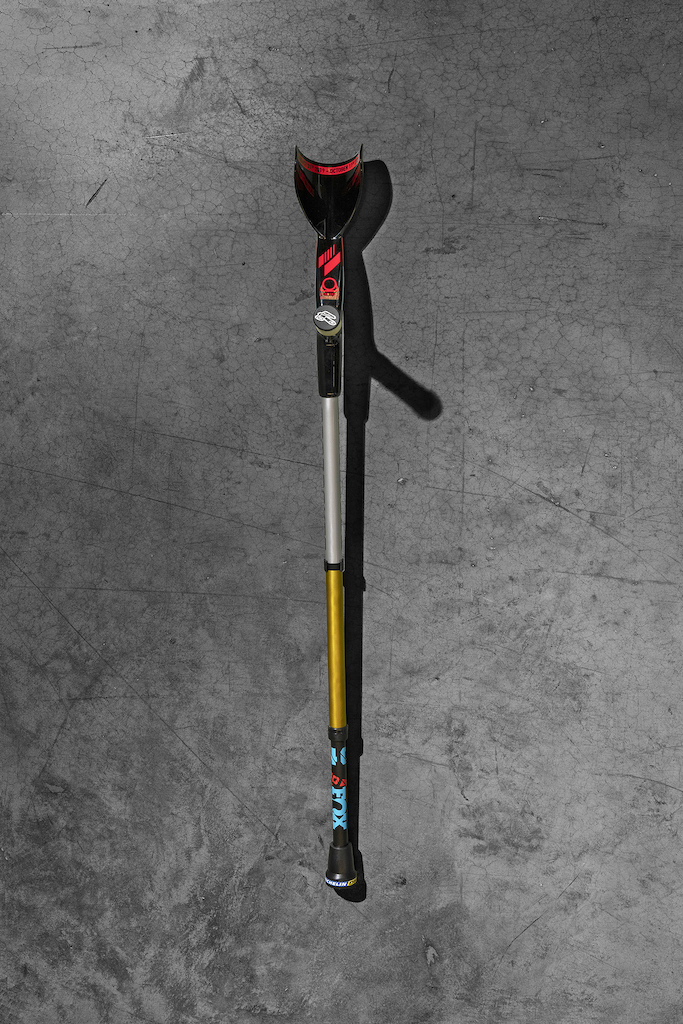 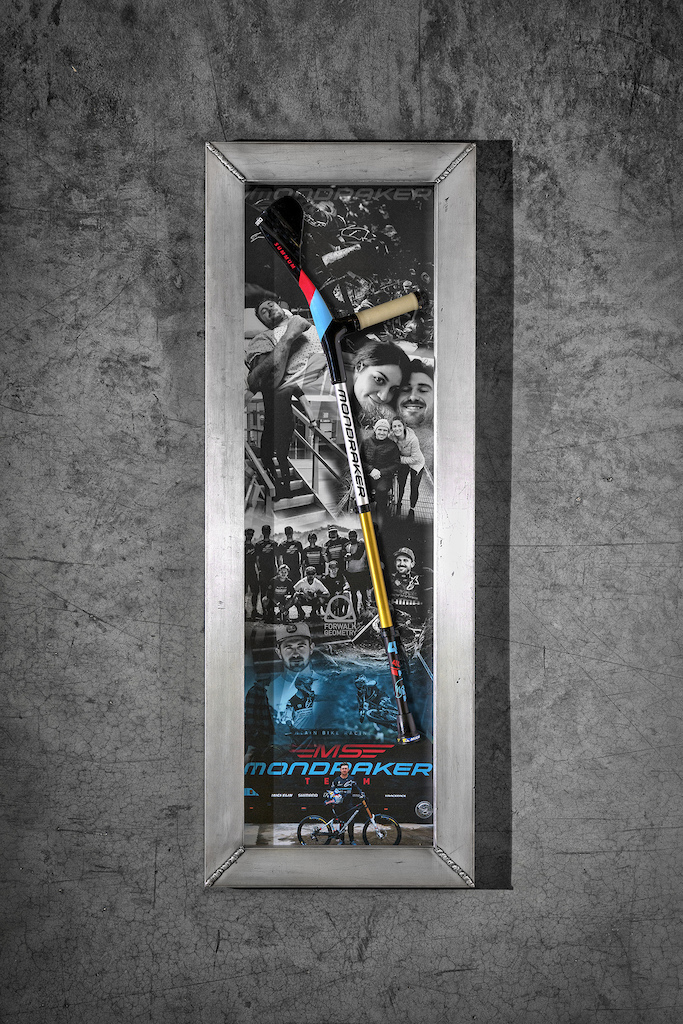 The MS Mondraker team are running aluminium frames now and that includes display cases for crutches too. 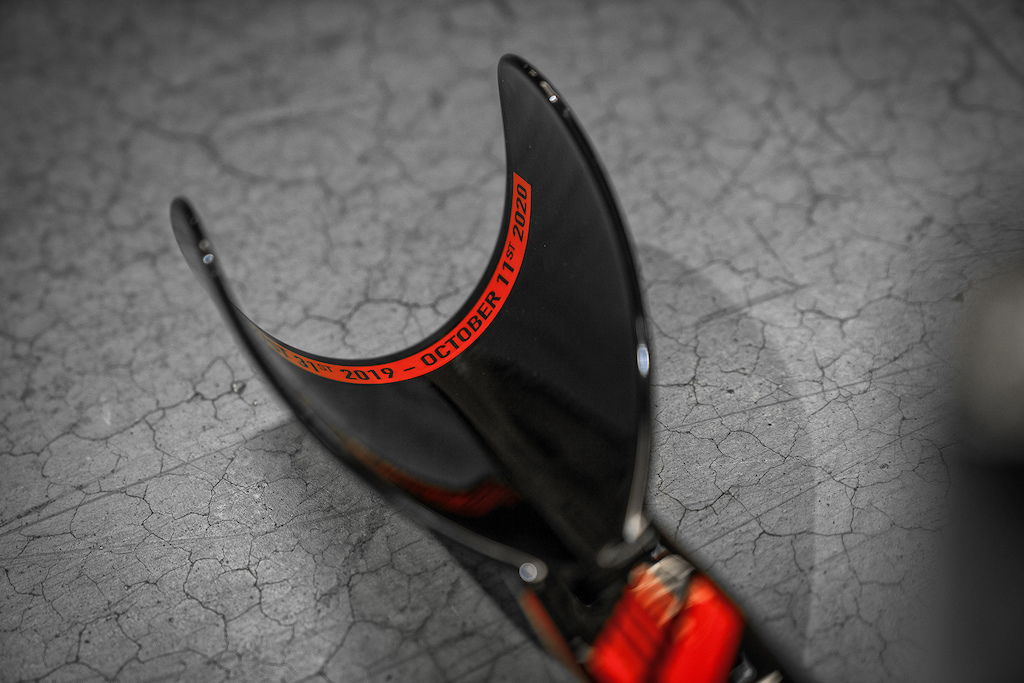 Just over a year later, Brook is back between the tapes at World Champs. 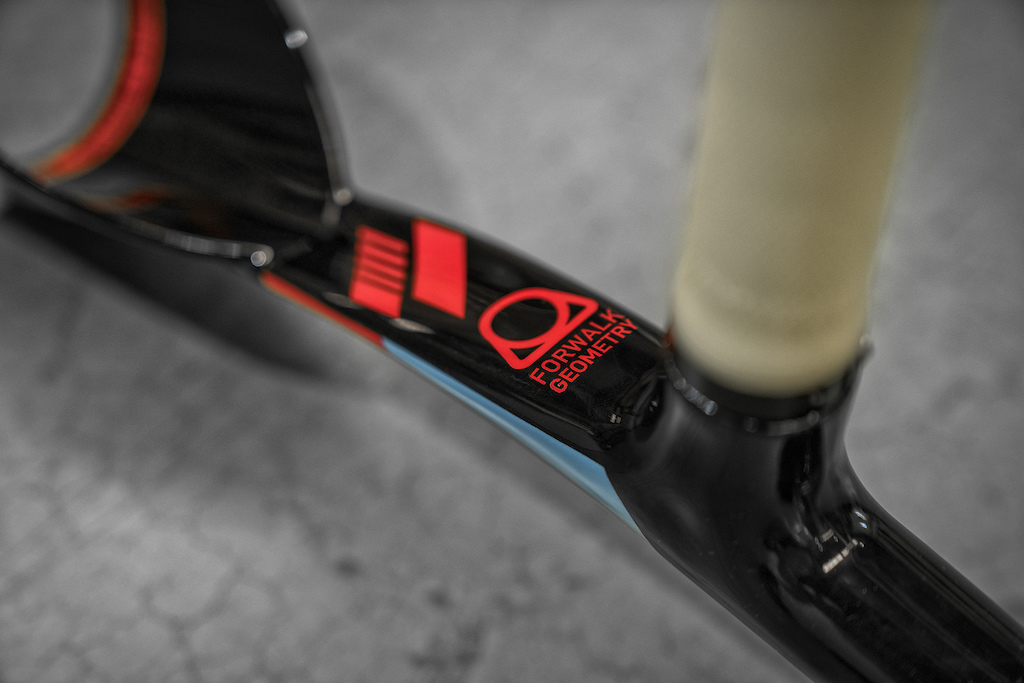 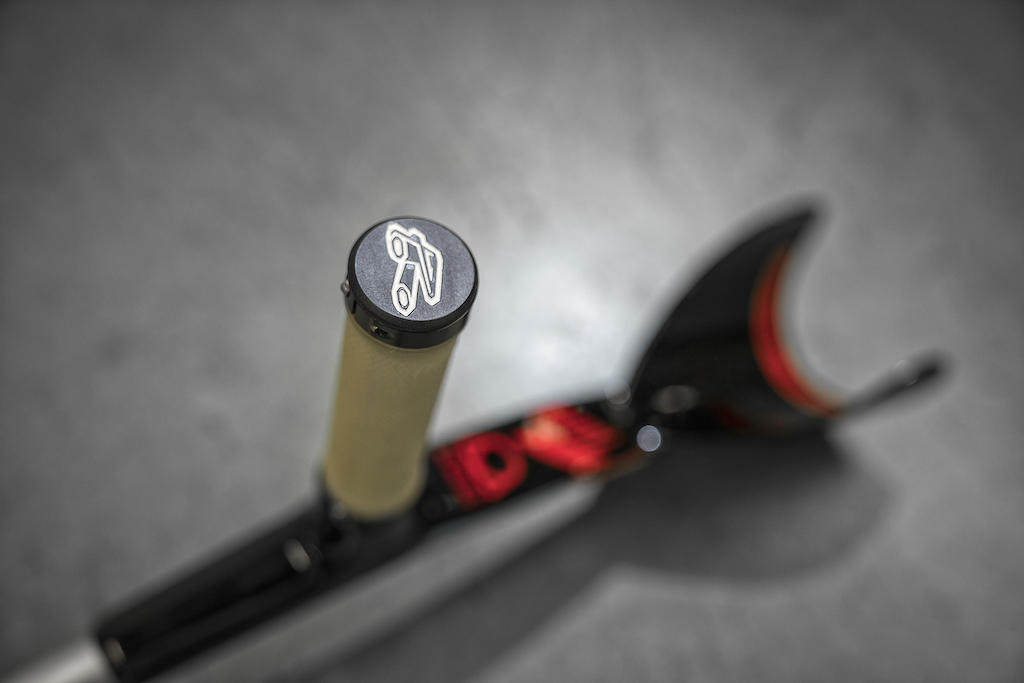 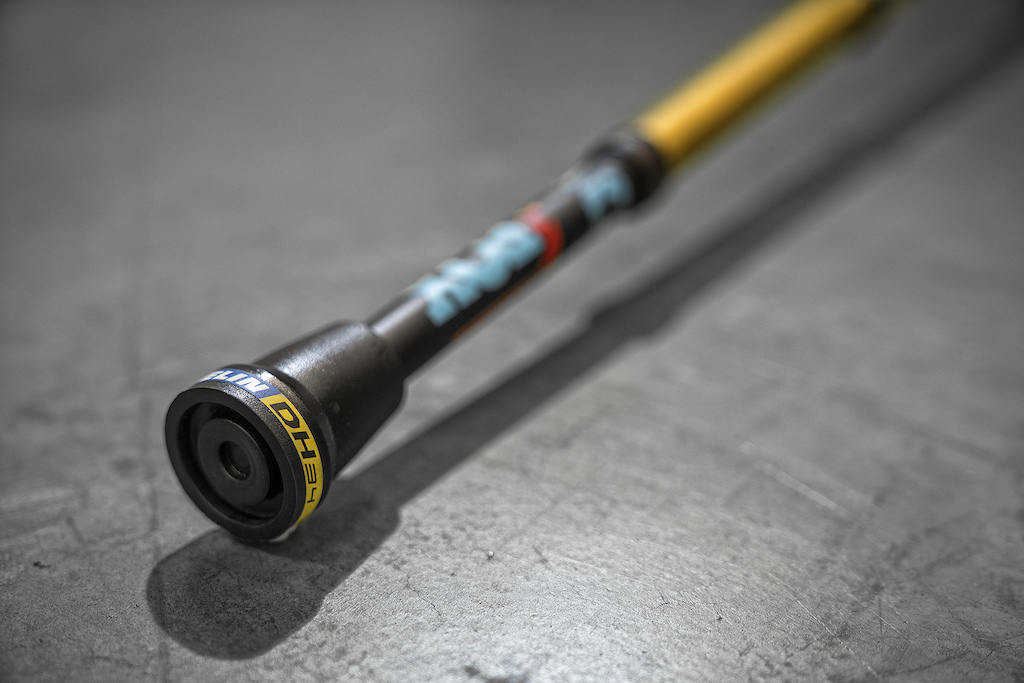 Michelin rubber provides the grip on the crutch feet. 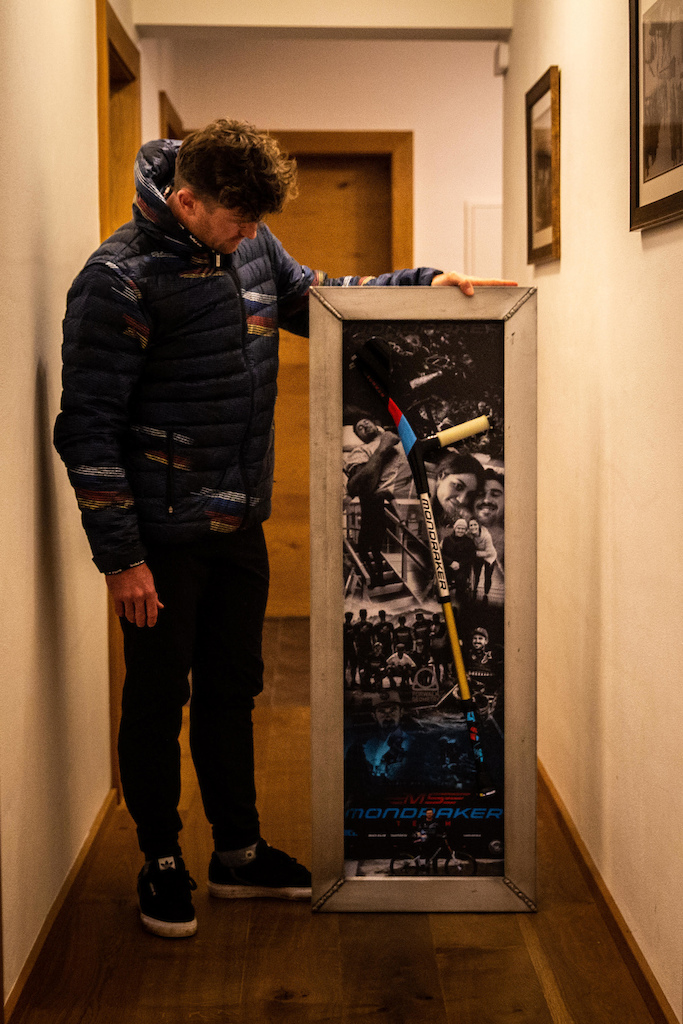 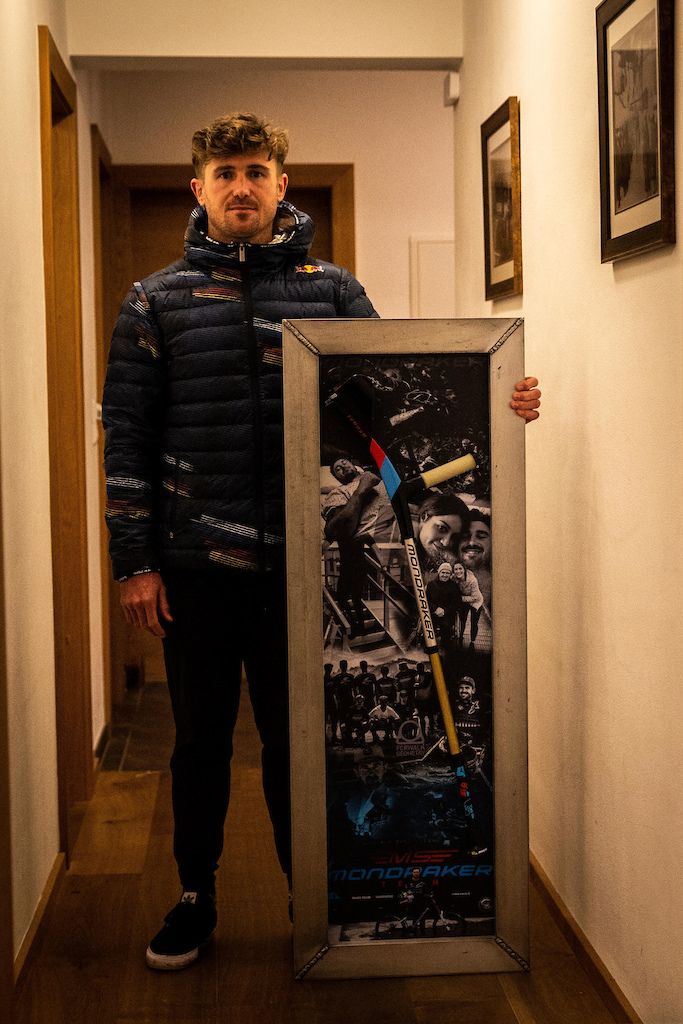 Brook picking up his comemorative crutches

ReeferSouthrland (Oct 8, 2020 at 11:24)
Here of some crutches to remind you of the worst day of your life, brilliant.

AKA: We care enough to give you something, but didn't use our brains to make sure that it was appropriate.

Might as well have given him an blown up framed photo of himself laying on his side after the crash in pain, or maybe a free helicopter ride at a tourist attraction park.

Chadimac22 (Oct 8, 2020 at 15:01)
My thoughts exactly. As someone who was on crutches for a VERY long time, the first thing I did after taking my “first steps” was throw those things in the trash. No one who’s actually had to rely on them for an extended period wants to keep a set around. That’s bad joo joo.

whatisthecolour (Oct 8, 2020 at 15:11)
@Chadimac22:
I thought the exact same. Anyone who's had to adapt to only being able to walk with crutches knows how tough it is and how good it is to finally throw them straight out the f*cking window when you don't need them anymore.

goldencycle (Oct 8, 2020 at 21:49)
Let's give the guy that survived terminal illness a coffin to celebrate! come on mondraker, who would want that?

You could say the same thing about MTBs, many people are surprised I went back to biking again

BlurredVision (Oct 8, 2020 at 4:54)
They should have thrown them away when it was apparent he would recover. Who wants that as a reminder.

markcorrigan (Oct 8, 2020 at 4:55)
Tbh he's probably trying best to forget about the whole incident and move on with his life... a nice gesture but can't see him hanging those on his wall.

Jacquers (Oct 8, 2020 at 5:21)
It can be a reminder in a good way too. Remembering the effort to get back to walking and being grateful for it.

hexhamstu (Oct 8, 2020 at 5:38)
I'd certainly want to forget it, Brook does post a lot of stuff on instagram about his recovery etc. So I think he sees it differently.

cwatt (Oct 8, 2020 at 6:19)
@Jacquers: any event that requires the better part of a year to recover doesn’t likely need any reminders.

OC-Racing (Oct 8, 2020 at 6:59)
When I was recovering from bouts of surgery that lasted over 2-1/2 years, my bar/stem/seatpost sponsor at the time made me a custom cane using handlebar material and a bar-end. I still have it and show it off with pride. We didn't have lock-on grips at the time, but my crutches definitely had mtb grips on the handles.

Jacquers (Oct 8, 2020 at 7:01)
@cwatt: Everyone's different. Some will want to forget about it completely, others will want to remember the lessons learned from it.

thegoodflow (Oct 8, 2020 at 6:28)
But the cash wouldn't have the sponsor logos plastered all over it

draggingbrake (Oct 8, 2020 at 5:41)
Maybe it's a nice gesture, but getting publicly of the back of an injury seems a bit low. Celebrating injuries doesn't suit me, I want to get them out my mind and put them behind me ASAP.

BigKahunaASE (Oct 8, 2020 at 5:47)
having had a back injury before.... my crutches can go fack themselves... the gesture is nice I guess, but the aluminum would go straight to the recycle bin.

captainjack07 (Oct 8, 2020 at 9:02)
Seems like a nice gesture if he still used them from time to time, but being given just one in a big friggin metal frame a year later, just before Worlds? What a terrible distraction.

Go Bulldog!
Everyone wants to see you back on the podium

doek (Oct 8, 2020 at 8:52)
as someone who has had a serious injury and fought back to ride again i would love this as a celebration of recovery. i find it really odd how so many commenters are offended by this and think you should try to forget about what happened. Sod forgetting, celebrate the hard work and be thankful.

Glad they didn't have to make one for the Pinkbike comment section (or a Pinkbike reviewer). They could make the most amazing one and all they got in response: "Oh, no water bottle mount... pass."

Please Mondraker makes magic happend for me!! Only need the lefty version by the way!

8tom8 (Oct 8, 2020 at 6:29)
It would be cool at the time when the injury happened but now that’s like there just expecting him to need them again

Simann (Oct 8, 2020 at 6:43)
What he was able to accomplish in one year is just outright amazing. From being a paraplegic to walking in a few months time.....I think this gift is amazing and a testament to everyone involved in his recovery back to the sport.

UncleAnti (Oct 8, 2020 at 13:15)
My neck brace was left in a box until recently and once discovered promply disposed of. No good vibes from that shit. Would never think a blingy paint job would make it appropriate wall decor.

mfoga (Oct 8, 2020 at 9:35)
I was like ok maybe they know Brook better and he will find the humor in this, the picture NOPE. I know people who would like and find this as funny gift but that picture says a 1000 words.

RonSauce (Oct 8, 2020 at 17:22)
This is the weirdest post injury gift ever. I would not be happy about my employer gifting me something that feels almost like a crack at me getting hurt on the job, especially if they left me out in the wind opening a gofundme or only fans to pay my bills.

Yes I’m being pedantic, but was actually curious if 11st was a thing somewhere.

Neechy (Oct 8, 2020 at 8:41)
I don't get this "celebrating recovery" thing. What if he hadn't made nearly as much of a recovery? Would he not be celebrated and instead forgotten about while struggling through rehab? Also, I'm sure these crutches would have been much more appreciated months ago... Maybe Mondraker didn't anticipate him recovering so well in such a short time frame.

TomasK (Oct 8, 2020 at 7:01)
Mondraker just went and outdone themselves.. Seriously, why would you do that? Right before the Champs.

dkendy1 (Oct 8, 2020 at 13:55)
They should have sorted the guy out some plane tickets to get him home earlier after he got out of hospital. Call this adding insult to injury.