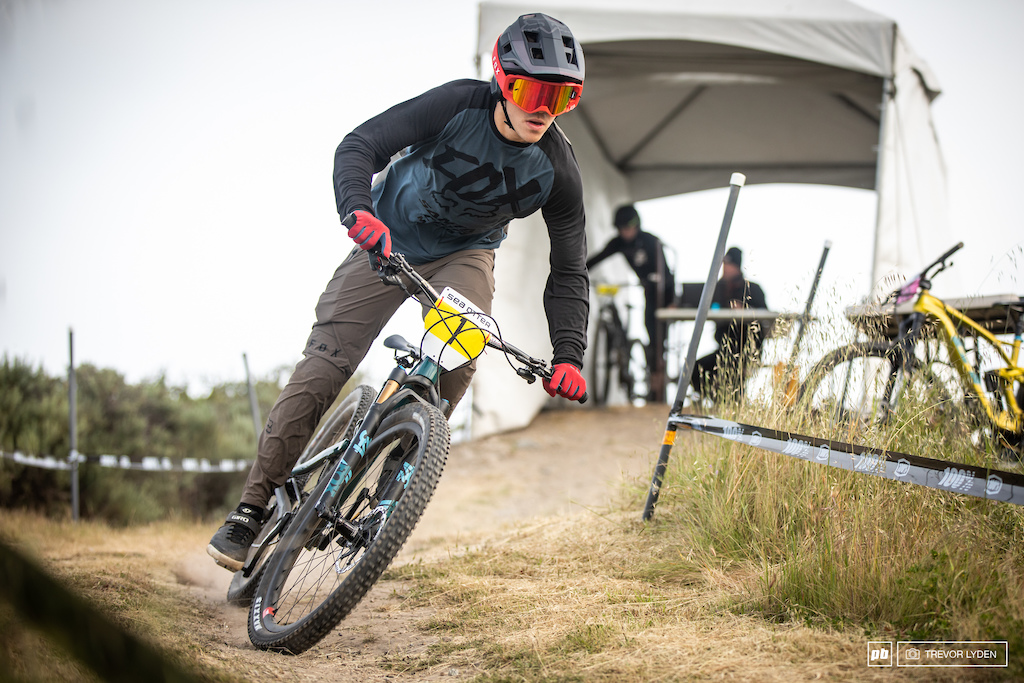 Following on from the new Fox Rampage Pro Carbon that was first spotted at Crankworx Rotorua, we've just seen another new helmet from Fox pop up at Sea Otter.

This time it was Nic Bean, who races in the under 21 category at the EWS, who was spotted in the lid in the Sea Otter Enduro. A bit of digging found the Instagram Stories of Brittany Phelan, Olympic skier and rider for Juliana, who also revealed a side of of Nic in the helmet: 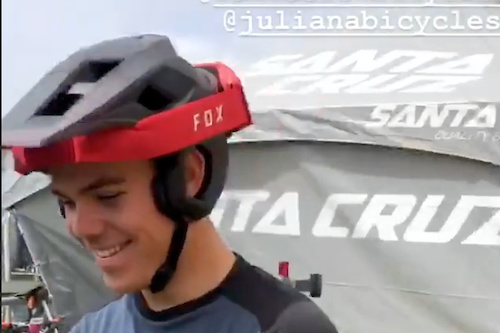 But then we went on the Fox website and it looks like the helmet has actually been released right under our noses. It's listed as the Dropframe and is described as a maximum coverage trail helmet but, despite appearances, it doesn't have a removable chin guard. Instead it looks to be an open face helmet with some added ear coverage. 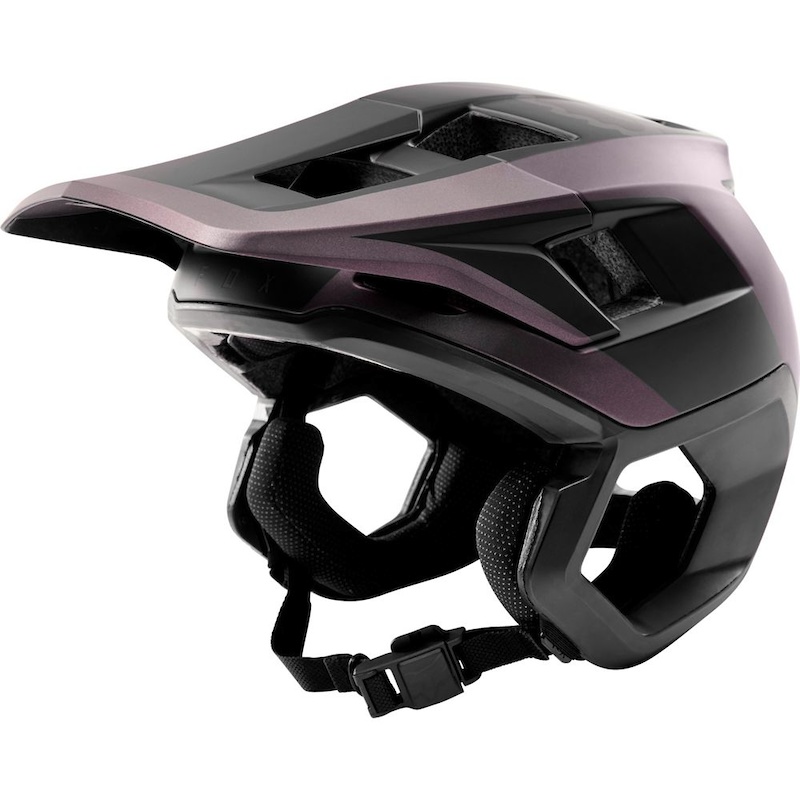 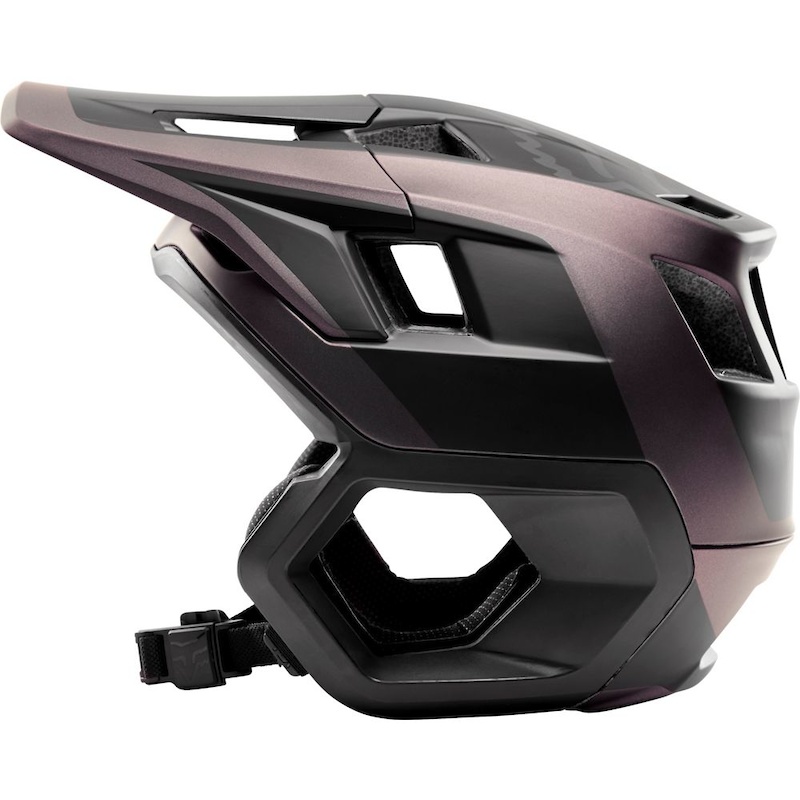 It has 8 big bore intake vents and 7 exhaust vents keep you cool and aid with moisture management, while the fixed visor is positioned to channel air through the helmet. We don't know the weight but as it seems to be a slimline Proframe, we're guessing it will be pretty low. 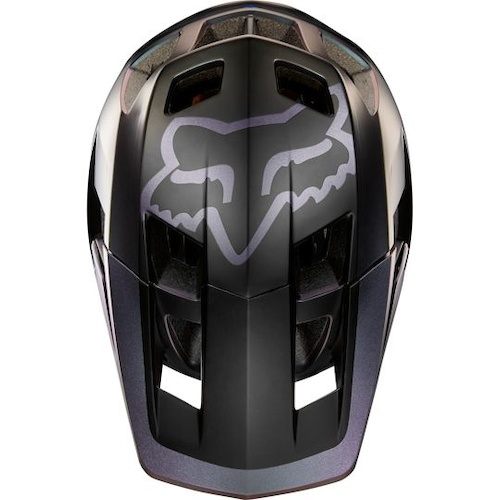 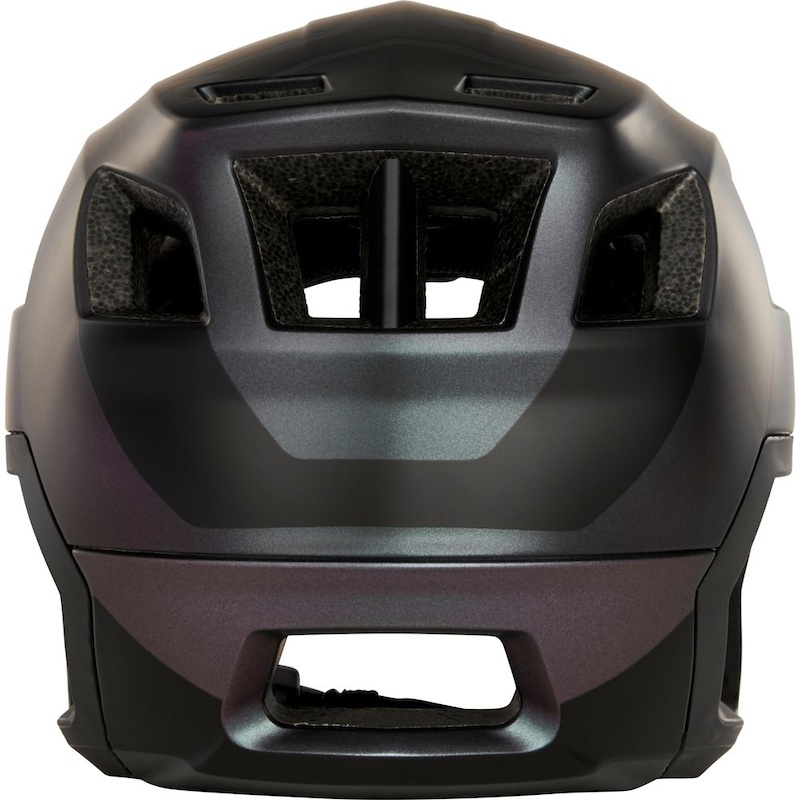 ramymcc22 (Apr 12, 2019 at 11:36)
That is quite literally the f#cking worst looking helmet i have ever seen. Not for diamonds would i wear it. Id quit biking before id wear that. Id rather cable tie a cat to my head than wear that. I dont like it. My eyes hurt now.

subwaypanda (Apr 12, 2019 at 14:38)
I'm with you. I could do with more guidance on how to position the cat correctly, at the moment it keeps scratching my neck and the tail is getting in my goggles.

tkrug (Apr 12, 2019 at 9:41)
If you put on the helmet before doing your man-braid you can lock the helmet on using the piece in the middle of the cutout.... and have your braid on full display!

Batipapo (Apr 12, 2019 at 10:00)
A little marketing research on PB forum would have prevented this fugly creation

...No, it’s the designers who are wrong.

jewpowered (Apr 12, 2019 at 10:19)
My girlfriend loves this helmet, she said if I wear this thing nobody will ever try and steal me. New Fox Dropframe, added protection with built in Prophylactic defense.

rezrov (Apr 12, 2019 at 13:50)
Every time I've been in a helmet-destroying crash I've dented the helmet right at the temple, which is the very edge of protection for a normal trail helmet.
I think side-coverage is often overlooked when it comes to helmets, so it's cool this addresses that. At the same time, I'm not sure why I wouldn't just run a Proframe (which I do) instead of this. You don't really notice the chinguard of a Proframe.

dudesofdisorder (Apr 12, 2019 at 10:50)
Your one-stop solution to flexing your brand new AirPods on the trail!

AD4M (Apr 12, 2019 at 11:25)
Fox, can you please start adding adjustable visors to your helmets, these stupid fixed visors get annoying after a while of being in your line of sight.

mpcremata (Apr 12, 2019 at 11:58)
@alexsin: Try it on first. I had a Fox Metah for a while that I bought online (clearance) and it was shockingly uncomfortable. Finally broke down a couple weeks ago and got myself a POC and I literally lol'ed when I put it on because of how much more comfortable it was. I'm a big fan of Fox shocks, gloves, shorts--pretty much everything else--but never again for a helmet. Also, this is the ugliest thing I've ever seen in my life, so there's that.

tiagomano (Apr 12, 2019 at 12:45)
@mpcremata: i came from the old fox flux and it was amazing, when i decided to buy the metah i was disappointed with it as you, was very uncomfortable, and the sweat dripped on the face instead of the sides like most helmets. that being said i love my rampage pro carbon(not the new one), so i don't know if is a fox problem, or just a metah problem

subwaypanda (Apr 12, 2019 at 14:47)
@spaceofades: while they might be separate companies, they are related, literally. Bob and Geoff fox started a moto brand together, they later spilt the company, one doing Moto suspension, the other apparel. I've heard they flipped a coin to see who became fox head and who had the fox tail

spaceofades (Apr 12, 2019 at 18:40)
@Kickmehard: I've heard the same, and I know they started out the same company. Now though they operate as two different companies.

ns2000x (Apr 12, 2019 at 9:39)
Laughing hysterically at these comments. But the older I get, and number of times I have counted myself lucky with trailside crashes this might be a great option over riding endurance events in a full face helmet.

feeblesmith (Apr 12, 2019 at 11:04)
It makes sense functionaly, better coverage with vents gets you this. Also remeber that chinbars might save your jaw and face at the expense of your neck. Your face is made for being smashed to protect your brain. Given you can breath that is...

mellowmood23 (Apr 12, 2019 at 13:31)
It doesn't look too bad when I see the photos of the helmet by itself . I think the photo and angle of the dude wearing it with the goggles make it look like kinda bad. Looks like it would keep your head cooler and still offer a little xtra protection.

Albatrosse (Apr 12, 2019 at 13:31)
this news article rapidly transitioned from a "spotted" picture to an advertisement for a helmet with a direct link to the product

kjc81 (Apr 12, 2019 at 9:47)
@vhdh666: Do you know this for sure or are you just spreading typical bullshit internet opinion based on no knowledge or experience with the product at all?

islandforlife (Apr 12, 2019 at 10:18)
Huh, all the downsides of one of those Giro convertible helmets (hot, looks weird), without the upside of being able to attach a chinbar... hmmm.

frenchfriedfun (Apr 13, 2019 at 6:02)
I like it, but I wish Fox would change the dial retention system for something more reliable. On my last two lids, metah and ranger, they seem to come undone when I look down(a rock face for example). Just my neck flexing makes the thing come loose. Sketchy.
and yes it's the right fit.

stiingya (Apr 12, 2019 at 16:36)
Is't there something about killing it before it lays eggs.... If this is their Star Wars Helmet, maybe next time they can do a facehugger!

jason475 (Apr 12, 2019 at 15:28)
I would wear this on principal alone. Nothing gets me as high as a good fight. And I believe that if I did in fact wear this, it would give me lots of opportunities to fight based on trail snickering alone.

SCxXxMTB (Apr 12, 2019 at 18:42)
Fox couldn't let the Giro Switchblade hold the crown for ass-ugliest helmet for too long

aarontherider (Apr 12, 2019 at 10:35)
Yep! Bamboozled by the spy photos, but then later told the helmet is available for purchase now

islandforlife (Apr 12, 2019 at 10:12)
Bell Super 3R. Not because I wanted to... but I was recently forced into fully testing it's crashing abilities.... I was pre-riding a course for an enduro race, I zigged when I should have zagged and ended up going OTB at a good speed into forest dirt and rocks. I can say it performed very well, MIPS did what it was supposed to and slipped significantly, so much so, that after the crash it was stuck in a fully slipped position blocking the vents! Helmet itself had a big dent in the top/side and the chin bar had a big greasy muddy ground print on it. I was totally fine... needed to sit down at the side of the trail and gather myself for about 10 minutes and headed home after the crash. But after checking in with my dr I was concussion symptom free and overall no worse for wear.

Even better, my shop was able to get me a crash replacement through Bell at a 30% discount and since the chin bar itself was deemed to be fine (didn't take too big of an impact and there is no foam to crush in a chinbar) I only had to replace the shell. So the overall replacement cost was much less than a brand new full helmet with chinbar.

vinay (Apr 12, 2019 at 11:38)
Ever since the guy from Kali explained that helmets need to be smooth and round to avoid the introduction of rotational loads on your head (hence brain and neck) I've always been wary of this. I don't get why Fox keeps pumping out angular helmets, though they're not the only ones. Heck, even the Kali Maya 2.0 helmet is a bit angular near the top/back.