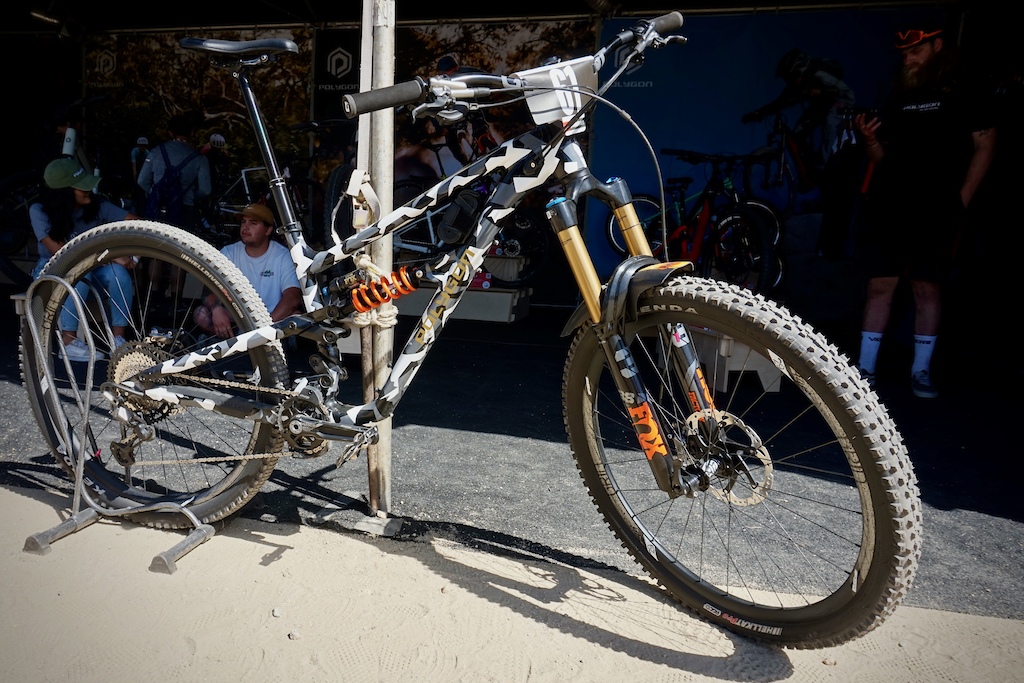 Polygon's race team has been spotted at Sea Otter on a new enduro bike that is due to replace the current Siskiu N9.

The bike has the new 6 bar Independent Floating Suspension system that we have previously seen on Polygon's Bromo emtb. As the name suggests, the system is designed to control the wheel path and anti-squat independently of the leverage curve. For a deeper dive into the system, read Seb Stott's first ride of the Bromo, here. It has to be said, without a motor getting in the way, the design looks a bit more refined on this enduro bike than on the Bromo and we don't doubt that it has been tuned differently as well. 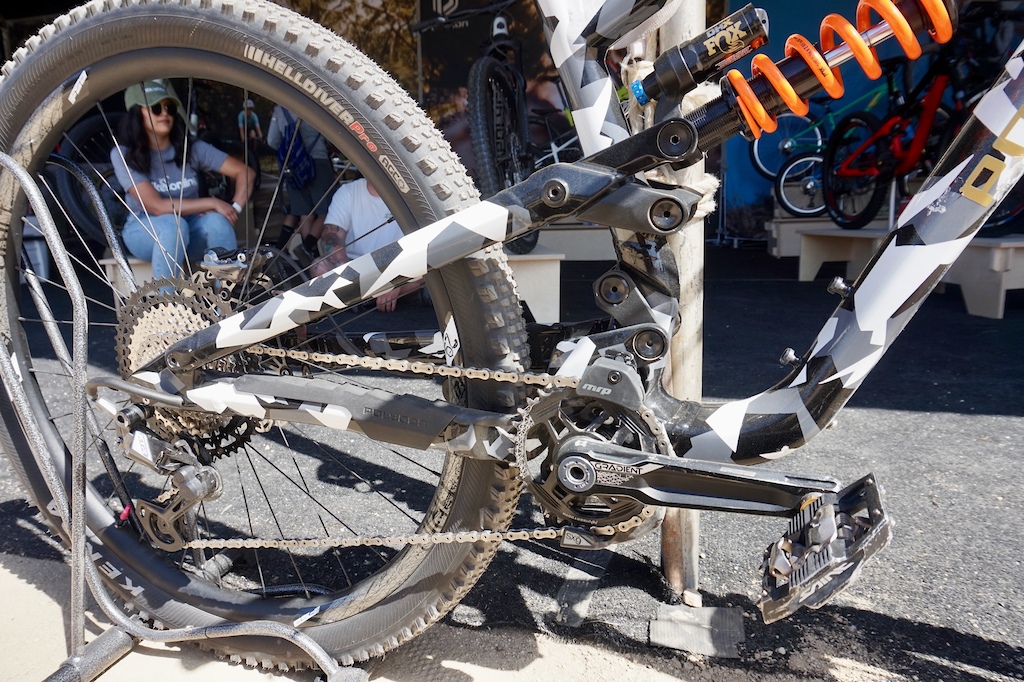 The bike rolls on 29" front and rear and has tweaked geometry from the previous Siskiu N9, although Polygon didn't have any specifics for us at the booth. The geometry has apparently been worked on with the brand's race team so we wouldn't be surprised to see a longer, lower, slacker treatment to suit modern race tracks. 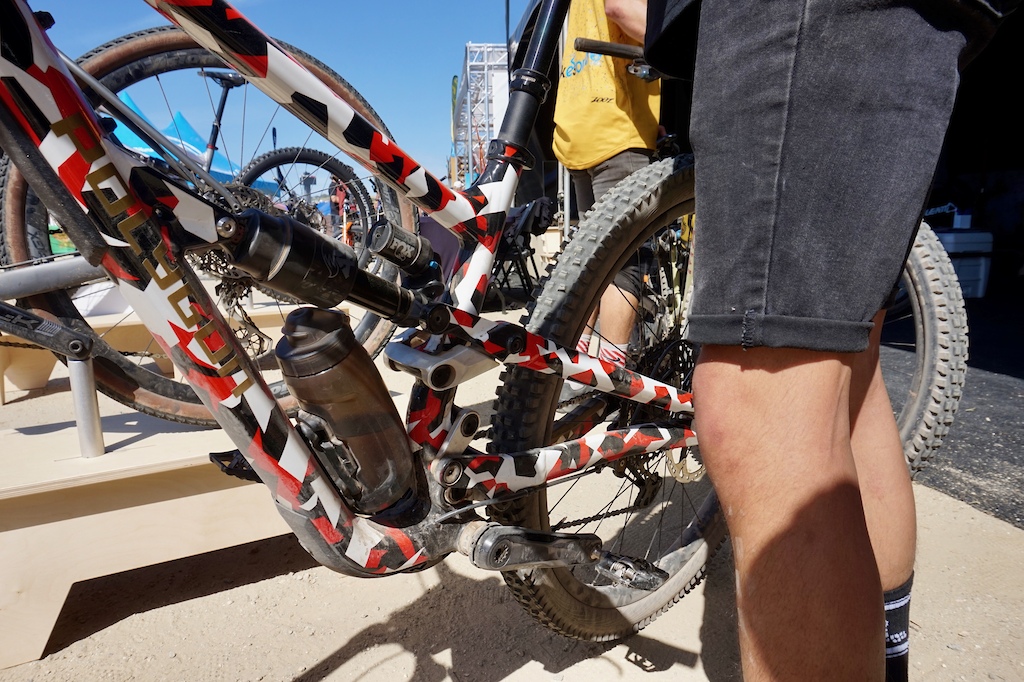 Amy Morrison's bike had a water bottle fitted and there's also room for a tube on another mount above the shock. 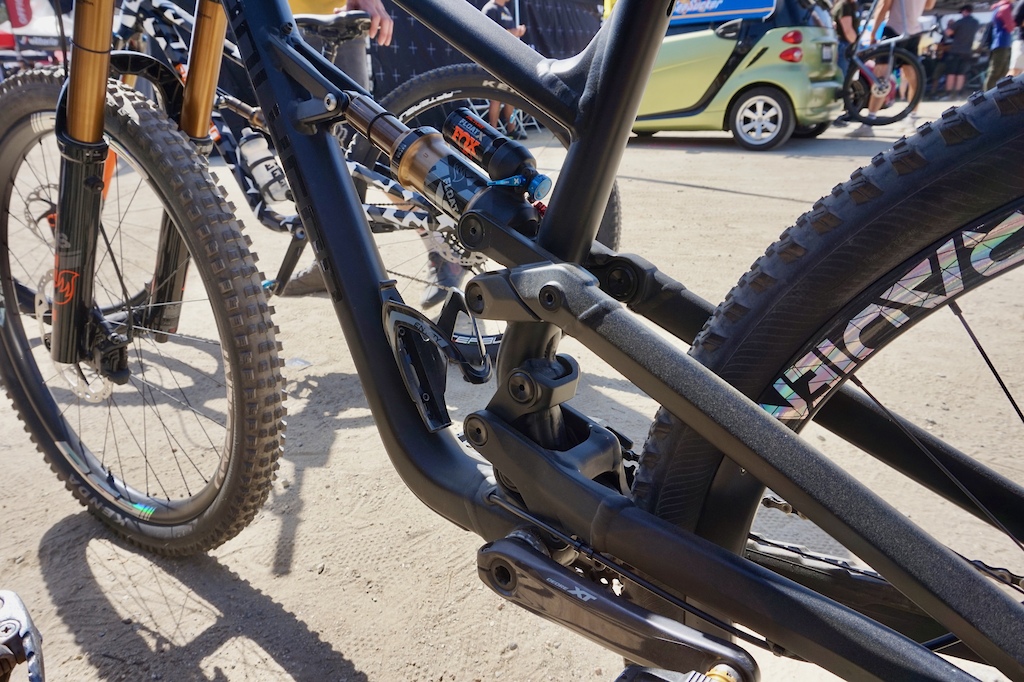 These prototypes are aluminium and we're expecting the release version of the bike to be the same. 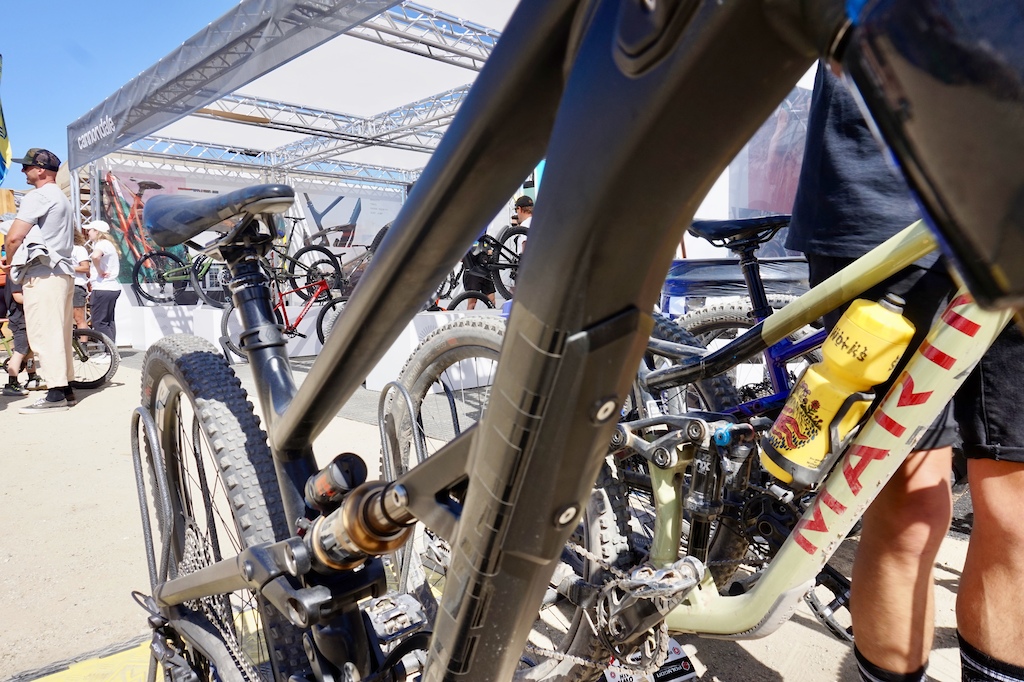 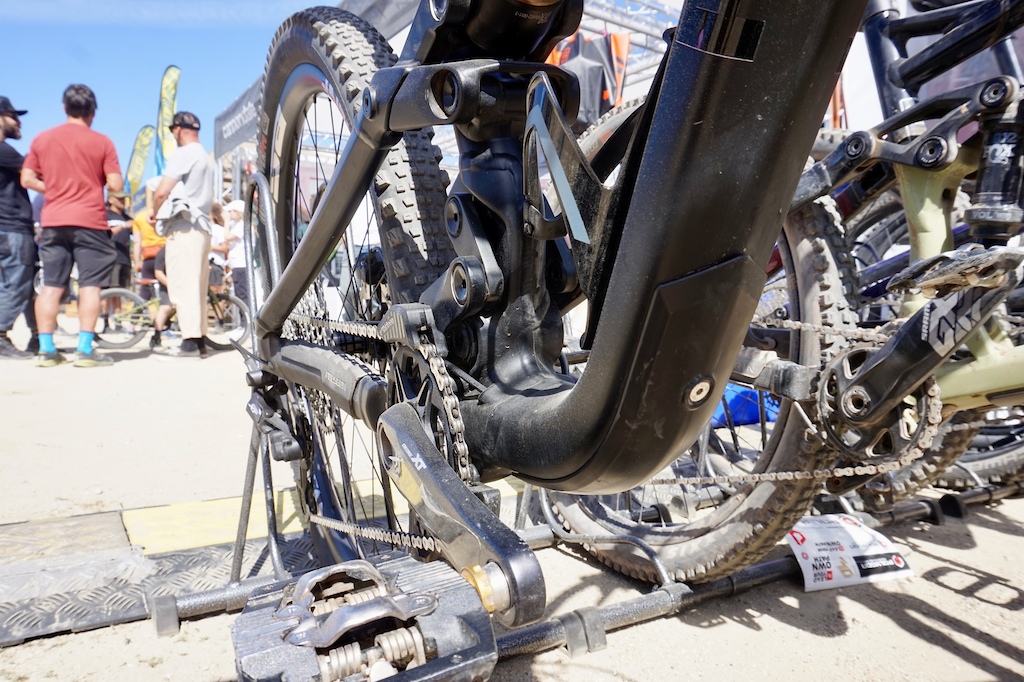 Protection can be fitted using the downtube mounts
The bike should be launching around July and we have reached out to Polygon for more information and will update this piece as it comes in.

goldmund (Apr 8, 2022 at 23:09)
@jamessmurthwaite: very cool! Did you notice that's a trunion mounted shock with the trunion eyelets bolted to the extension link. That means it's not really an extension link, It would need to be part of the upper link or it would flop.

iamamodel (Apr 8, 2022 at 23:57)
@mtbflow24: A Mod was a person who followed a subculture of simple but tailored style and modern jazz and rock music in Britain in the Fifties and Sixties. Probably best exampled as those early followers of The Who. Loved scooters / mopeds.

fluider (Apr 9, 2022 at 13:14)
It's not a pure 6-bar design like Atherton bike's DW6 is. And I dare to say it's 4-bar with another linkage driving the shock and providing needed structural stiffness.
.
This design has rear wheel mounted on member that you usually call chainstay which is mounted via two short links to the mainframe above the BB. Everything else there just drives the shock and provides lateral stiffness.
What seems like shock extender here is just extension of seatstay link.
.
DW6 on Atherton bikes has rear wheel mounted on linkage member that is between the two low short links and upper link (rocker link).

fluider (Apr 9, 2022 at 13:23)
This is in fact the same principle like Knolly's 4bar I-dont-know-how-they-call-it where there;s another linkage to drive the shock. But I very much like more this approach because it uses short links instead of FSR like 4bar of Knolly. The advanteges are clearly mentioned in Seb Stott's video.
www.pinkbike.com/news/first-ride-polygon-mt-bromo-a-relatively-affordable-ebike-with-six-bar-suspension.html

goldmund (Apr 9, 2022 at 20:27)
@WillW123: got it, now I see that looking at Amy Morrison's bike with the seat stay\ extender that are color matched. Pretty cool design! It's the offspring of the cannondale fulcrum and the whyte\ Marin bikes of the mid 00's

Remove a link from a 6-bar (Supreme, E-bike Yeti, Atherton) and the rear axle is all over the place, i.e. undefined.

When defining the suspension 'barness', the shock driving linkage is not part of the equation.

lepigpen (Apr 8, 2022 at 17:29)
Budget bike youtubers seeing this licking their lips... But seriously, glad they're updating their bikes and seemingly in a good way. Old enduro frames looked a little awkward but the new trail bikes are popping up everywhere and I wouldn't be surprised to see these flood the trails as well. Interesting that the solution to ratios for them is a whole separate linkage system and not just moving to 4 bar or split pivot or whatever. Would love to hear what their thinking is and what they were trying to achieve. The trail bikes feel pretty soft but definitely don't 'feel like a single pivot' as evidenced by PinkBike's own field test...

stillunimpressed (Apr 11, 2022 at 15:19)
It was pointed out previously that this linkage is not a 6 bar. It is clearly a 4 bar (with a linkage driven shock) and a concise explanation of why that is can be found in the comments by @bogey and @Cord1 at the following link on this site:
www.pinkbike.com/news/first-ride-polygon-mt-bromo-a-relatively-affordable-ebike-with-six-bar-suspension.html

Only the DW6 linkage on the Atherton bikes and the Yeti Sixfinity linkage are 6 bars. The Felt Equilink was too but Felt doesn't appear to make MTBs/suspension bikes anymore.

Plancktonne (Apr 9, 2022 at 7:14)
Please correct me if I'm wrong, but if you gonna do 6 (six!) bar linkage and end up with trunion shock driven by extender from behind the seatube, you did shitty job because it will eat shocks faster than chains...

zombiejack33 (Apr 9, 2022 at 7:46)
@baca262: another person who doesn't know what they are talking about but still feels like leaving a meaningless comment. *sigh*

to actually notice a difference, it has to be a high pivot vs basically anything else. the only tangible difference between the designs is the amount of pedal kickback and progression which is basically minuscule.

ArturoBandini (Apr 9, 2022 at 0:49)
I am totally onboard with seb scott, especially in this case, what is the benefit of this compared to a classic 4bar with 2 short links? Must be very very marginal. Also I do not see the point of the lower lower link(s). Normally on a 6bar upper and lower link are connected and to have it not over-confined you implement a pivot in the otherwise solid rear triangle. This seems pointless, unless there is a hidden trick, that you cannot see in the pics. Might be the case, would be interesting to know.

ArturoBandini (Apr 9, 2022 at 0:53)
To add one last thing: the only 6bar, that kinda makes sence, seems to be the canyon, because there you really can decouple axle path/anti squat from leverage ratio. I understand that. All the others not so much.

Muscovir (Jun 29, 2022 at 2:39)
This IS actually a 4-bar system with 2 counter rotating short links and not a 6-bar as claimed by the article... The editor who wrote this article probably just didn't know any better.

Muscovir (Jun 29, 2022 at 2:35)
Can we please stop calling bikes "six bar" if they absolutely aren't a six-bar system? In engineering terms, this is actually a four-bar linkage. The additional fluff added on top purely controls the shock rate and thus has nothing to do with kinematics.

spudreau (Apr 8, 2022 at 18:25)
That skyscraper seat post almost made me start over counting the bearings on this bike

noopinion (Apr 8, 2022 at 23:03)
The hell is that tire combo? Whoever chose that better not choose the production spec.

goldmund (Apr 8, 2022 at 23:21)
Those are race bikes so they are running a rear semi slick to roll fast, sea otter courses are smooth hardpack.

CarbonShmarbon (Apr 9, 2022 at 8:35)
Bearing maintenance aside, this thing looks like PITA to just keep clean.