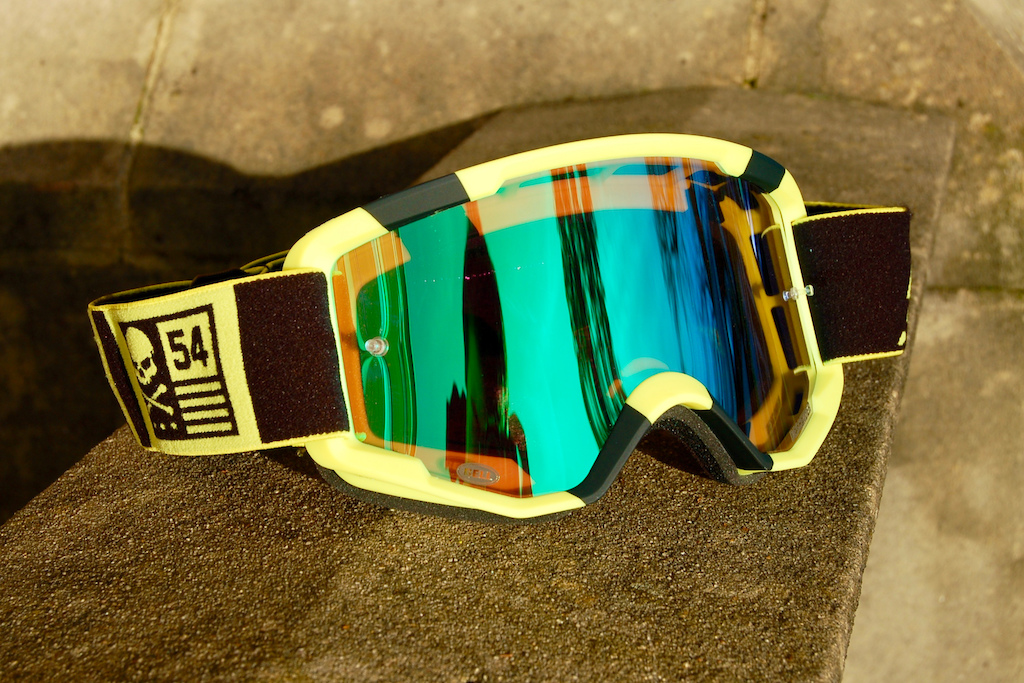 After seeing its athletes cover half of their helmets with another brand's goggles, Bell has released its first line of eyewear with the Descender. Rather than start with a premium goggle, these are actually aimed at the mass market, however Bell have plans for more models in future that will fill up that space too.

The Descender has a polyurethane frame and elasticated strap with a silicon grip. They should be compatible with any helmet, full or open face. 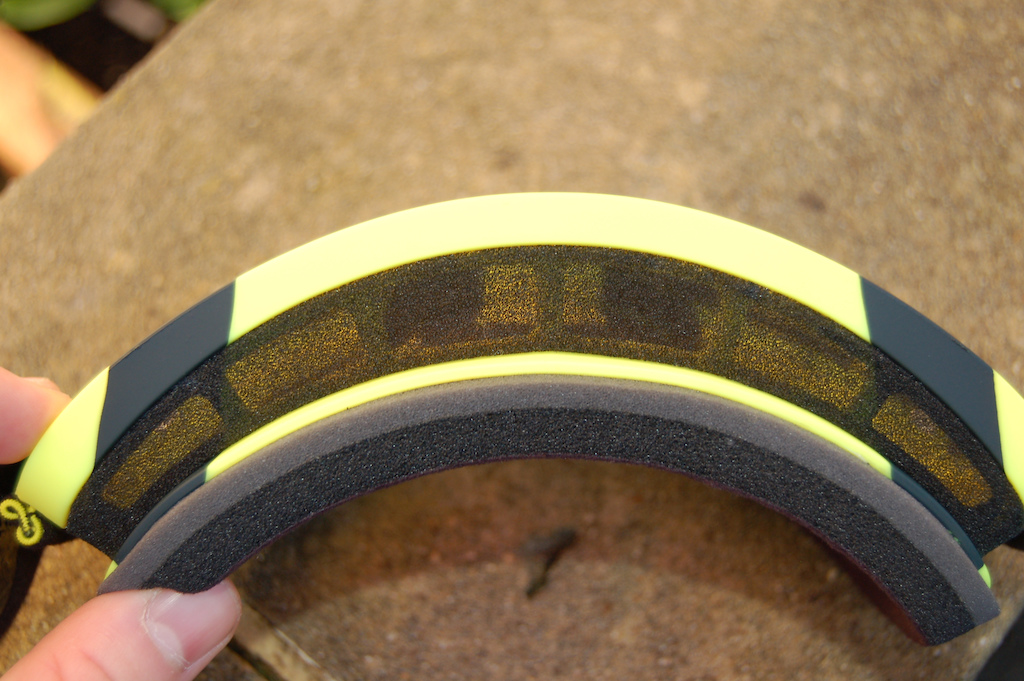 Protection wise, you get CE EN 1938 Certification and UVA/UVB/UVC protection up to 400nm. The mirrored version will cost £49.99 and the clear version will be £36.99, replacement lenses are also available. 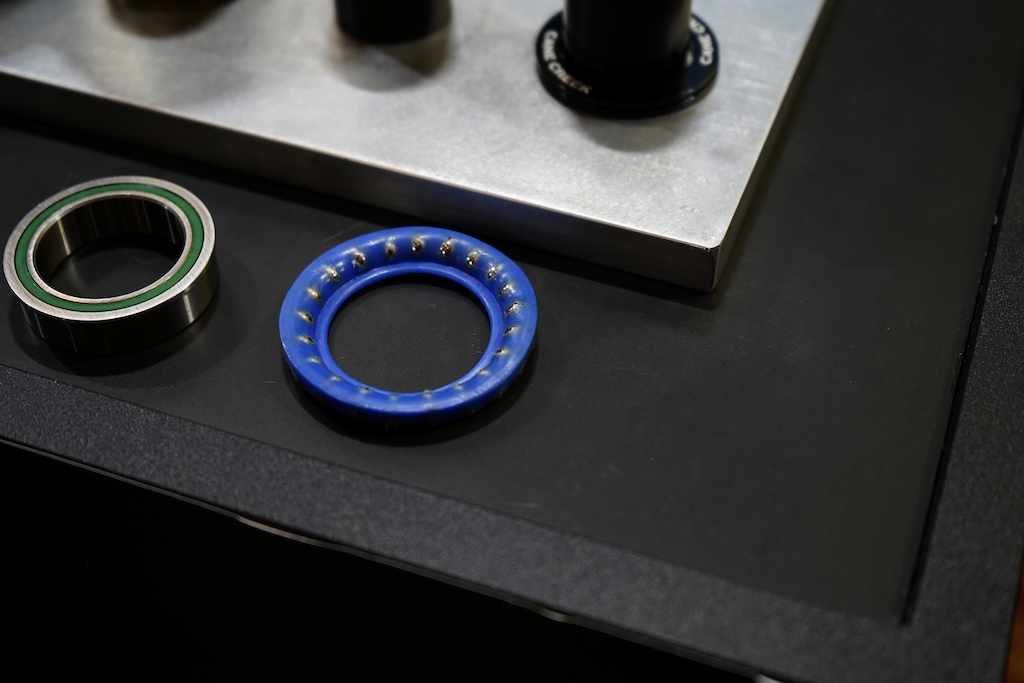 Cane Creek have partnered with SKF to release these bearings for mountain bikes that use MTRX's Solid Oil filling for lubrication. The technology is is often used in dirty environments where ingress could drastically shorten the life of bearings. In these bearings, the lubricant fills the space between the balls so there is very little chance of contamination, even if you're using a jet washer. 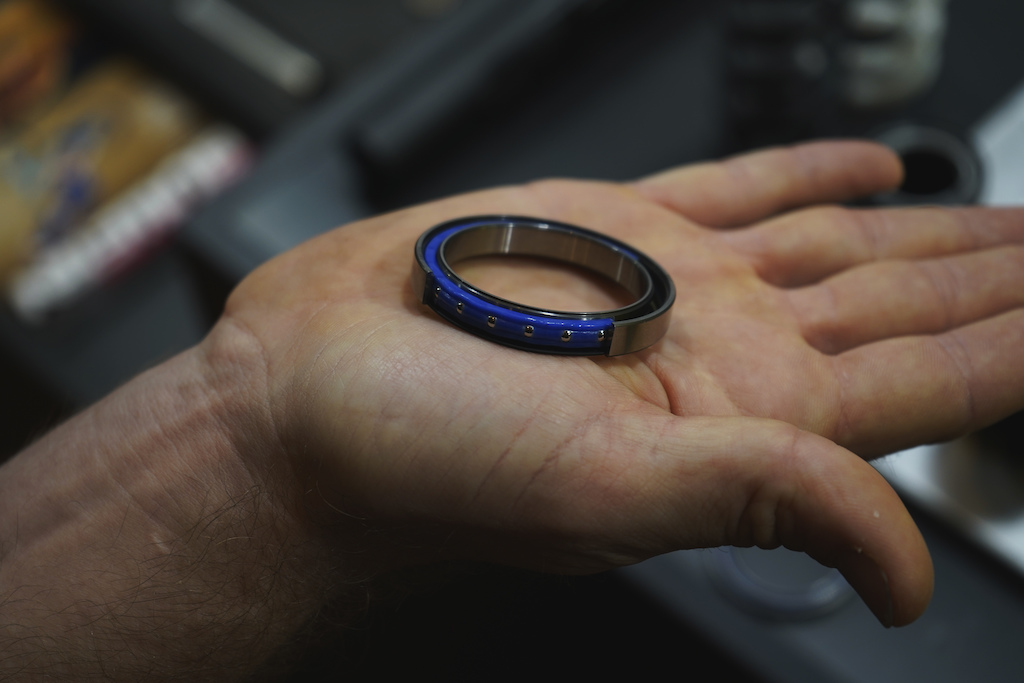 Cane Creek acknowledge that this won't be for everyone, especially as there is an apparently significant efficiency penalty to pay, but if you live in sandy terrain or jet wash your bike a lot and go through a lot of bearings, you may be willing to take that trade off. 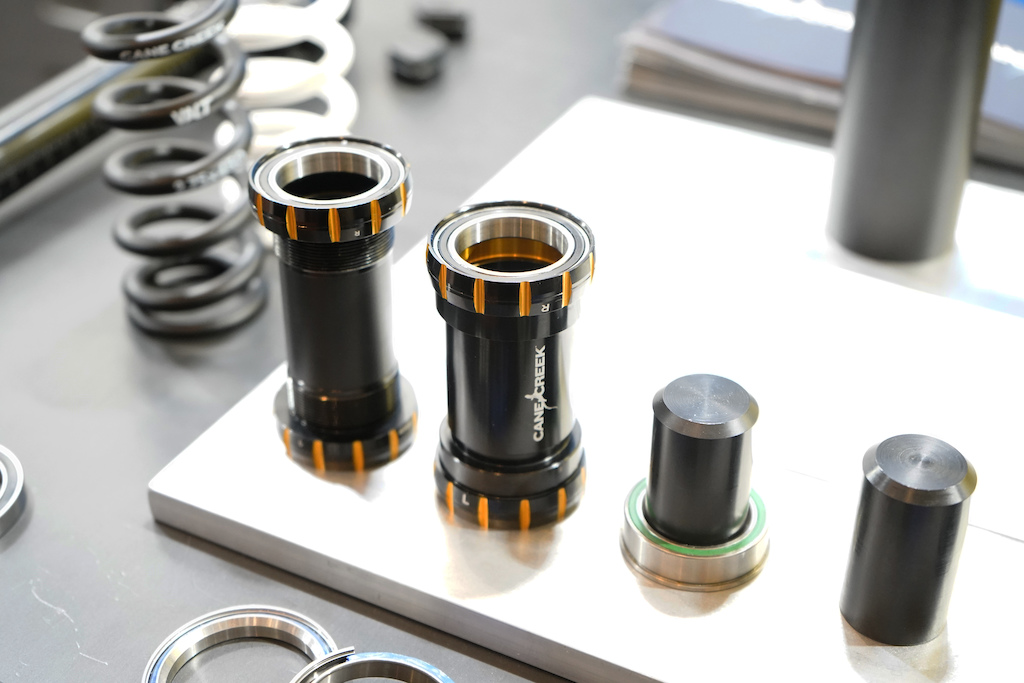 Currently, Cane Creek are offering a version of their 30mm axle bottom brackets with the bearings but have plans to broaden the range soon. The price is from £120 for a bottom bracket. 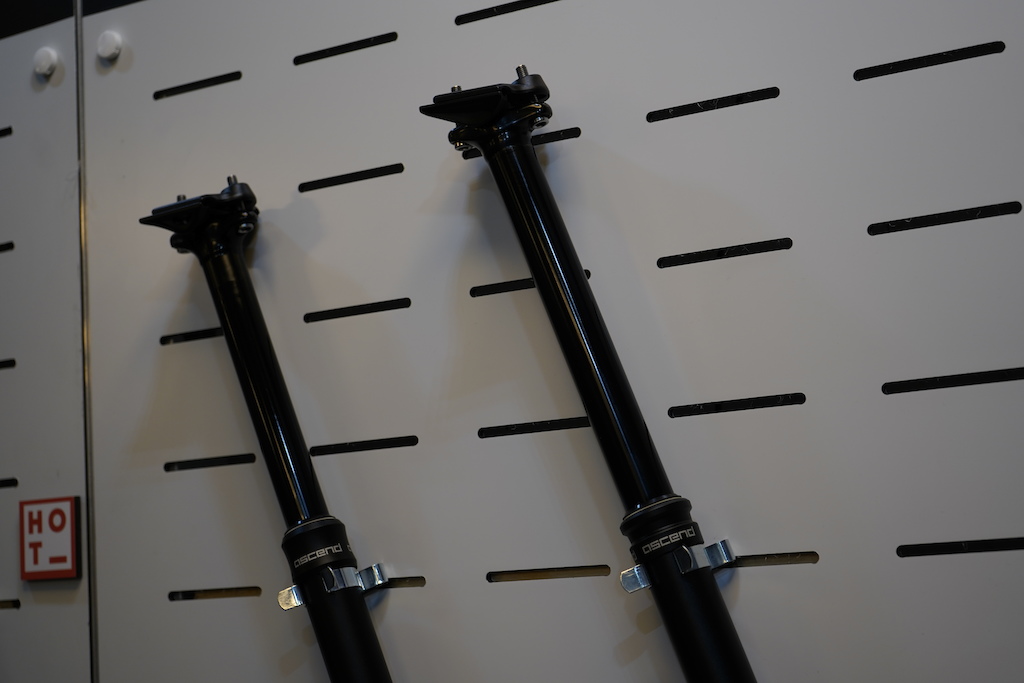 Brand X's range of simple yet effective droppers continues to grow and they have now added a 200mm version to their line up. Best of all, it will be selling for the same price at the 170mm version at £169.99. If you need to replace your current dropper for a longer stroke or because it's faulty, this could be one of the more cost-effective ways to do it. 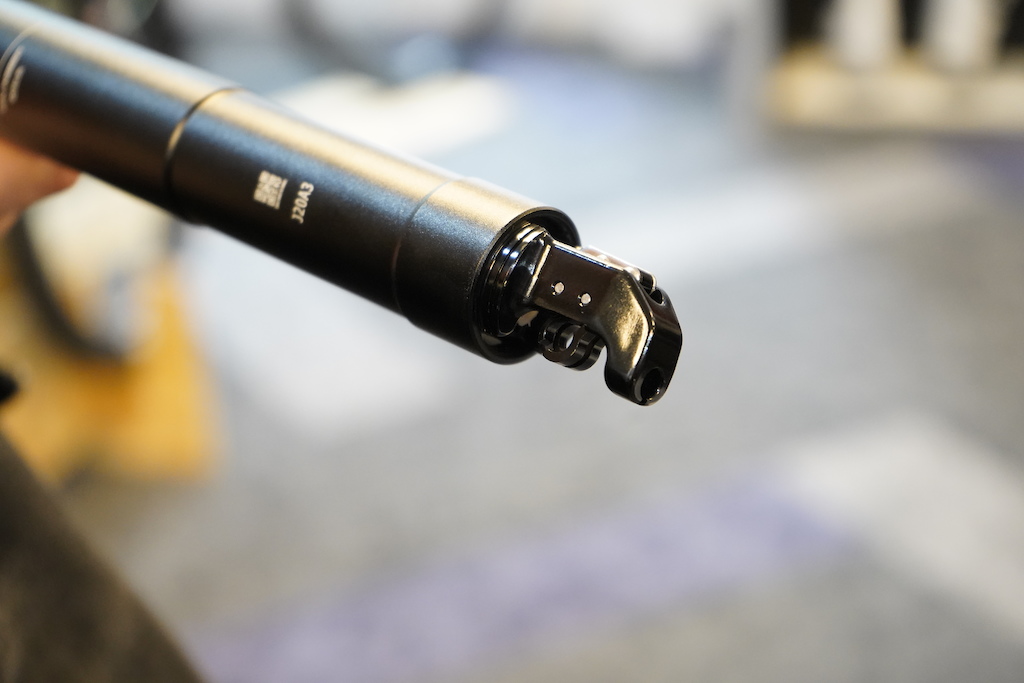 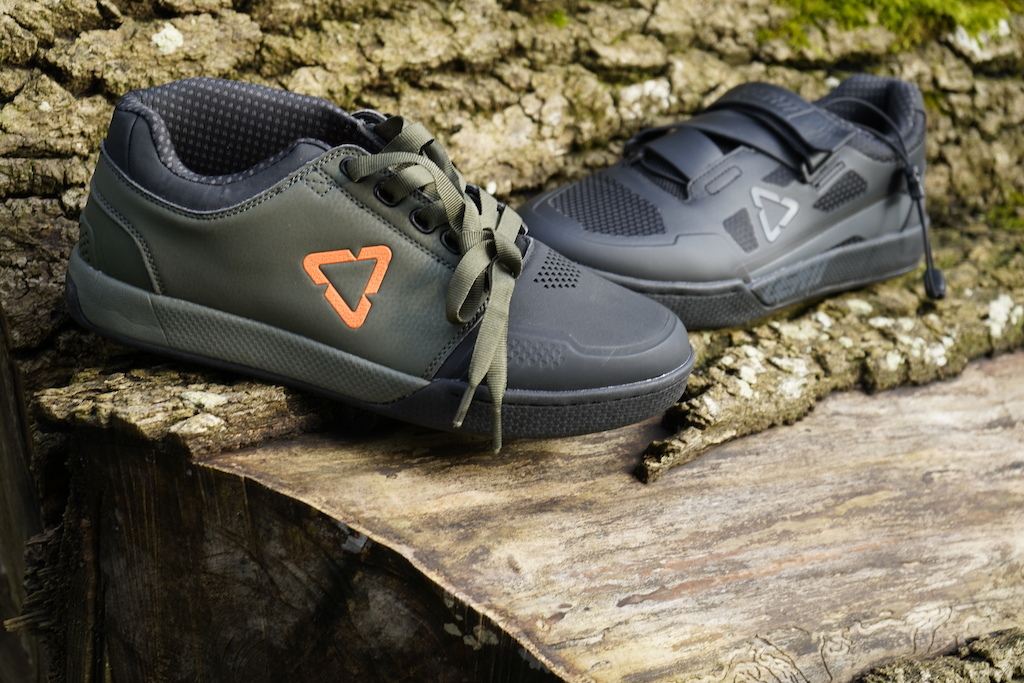 Last year Leatt released a new goggle range and this season they are looking to introduce shoes, making them a full head to toe mountain bike brand. We are still waiting to learn more about their new footwear range but we have been told they will be available for consumers at the start of this season, so watch this space. 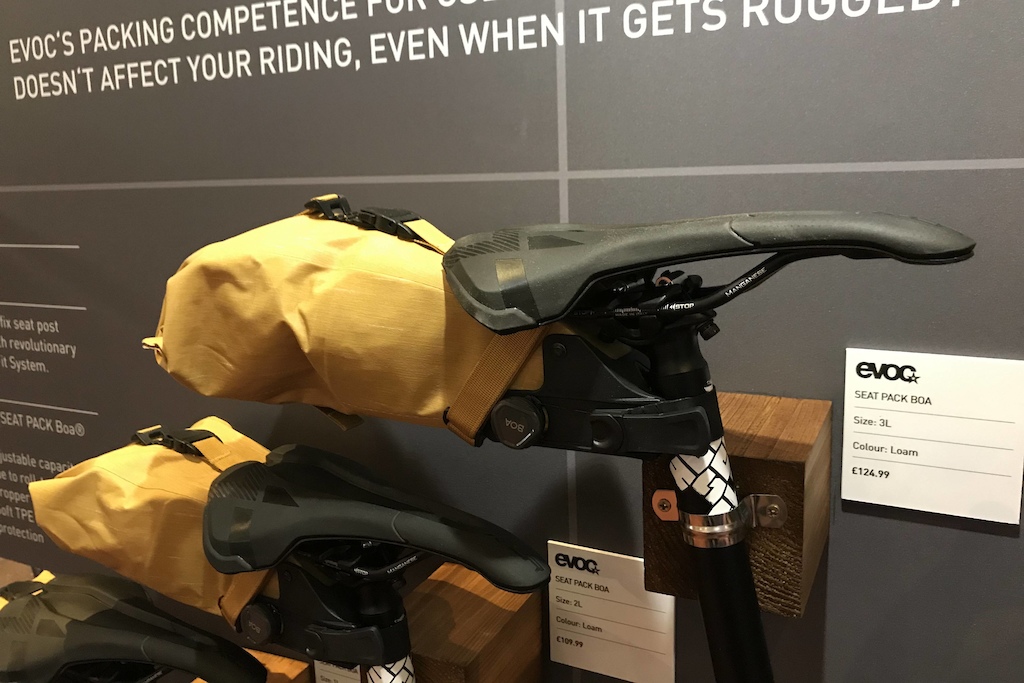 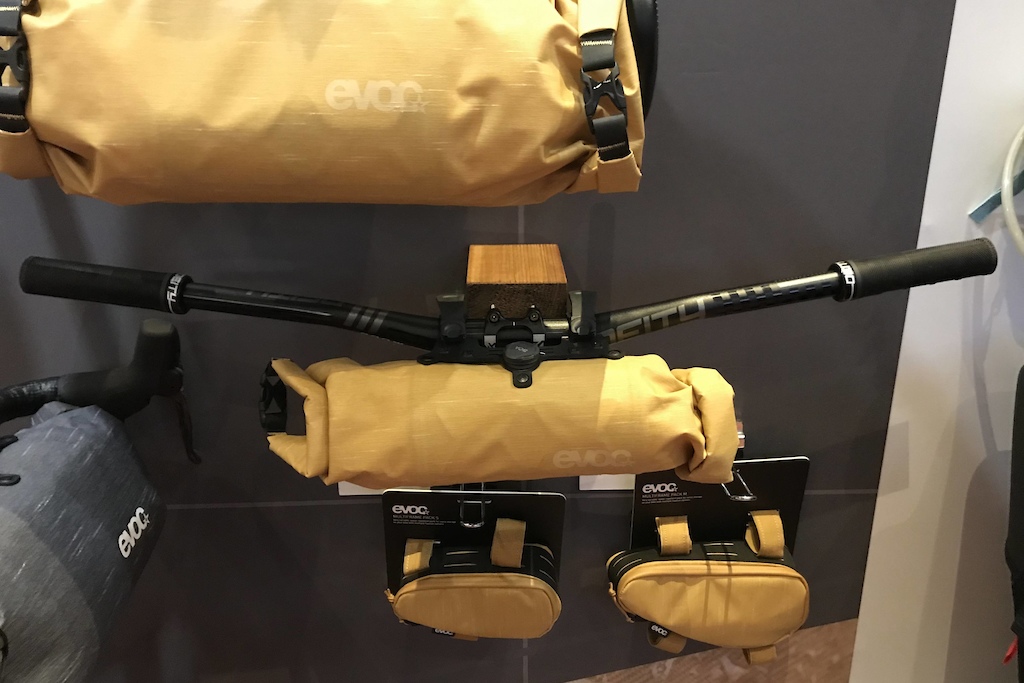 2020 looks like it may be the year of bike packing at mountain bike shows and Evoc are out of the traps early with their range of bags. They say these bags are more for 'credit card bikepacking', where you ride from hotel to hotel rather than wild camp. This style of adventure means you can cut down on your luggage and weight so you can enjoy the riding in between stops a bit more.

As such, these packs are relatively small in volume but have a number of MTB specific features such as frame bags sized to work with shocks and narrow straps on seat post bags that don't interfere with dropper seat posts. A mock-up of how they may look on a bike is below: 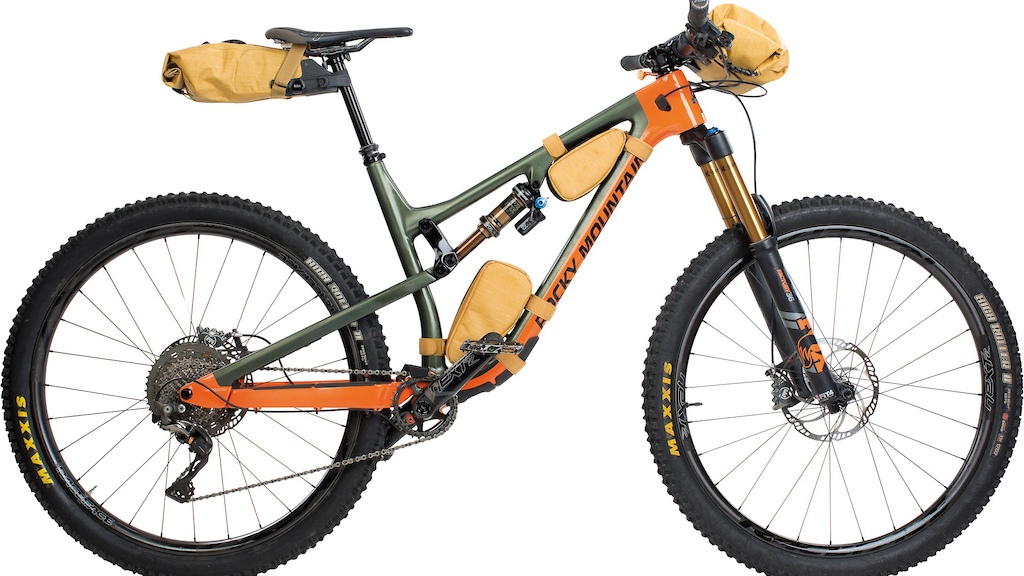 Now that Shimano has relaxed its licensing of Micro Spline hubs, brands are able to offer their own aftermarket hubs compatible with the Japanese brand's 12 speed set ups. Here are Hope's and Halo's. 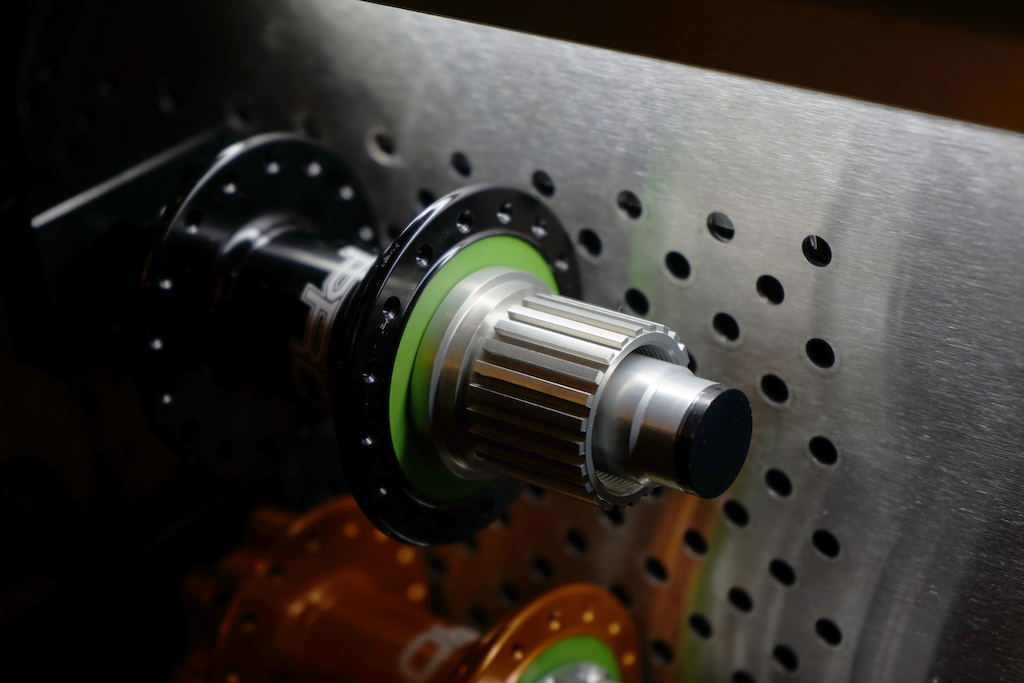 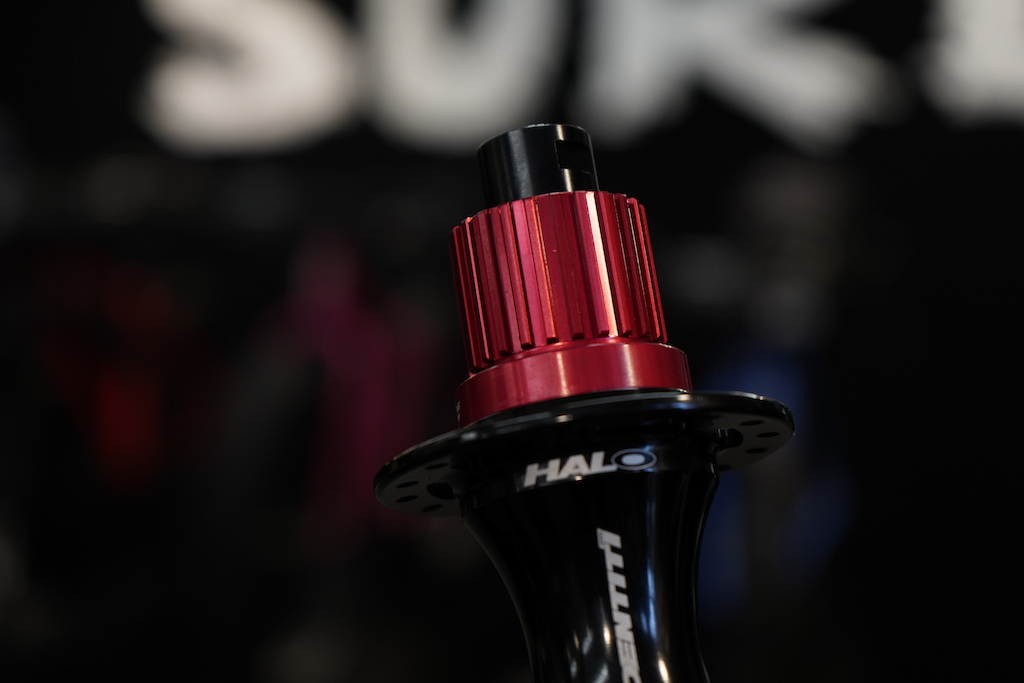 Halo is also working on a conversion kit so that riders with older hubs can update them to Micro Spline: 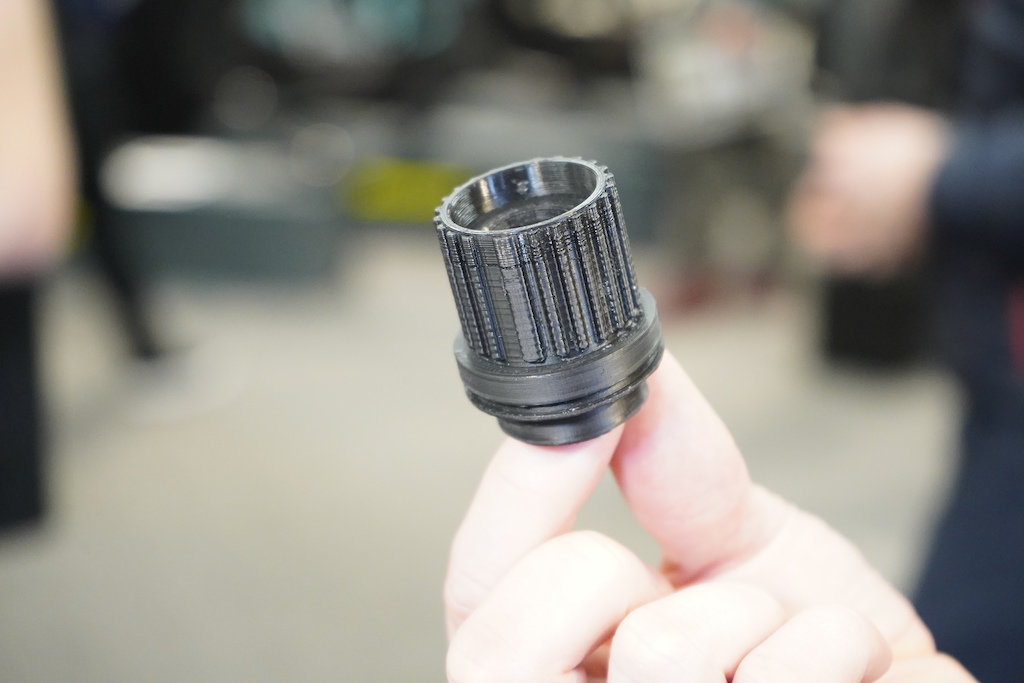 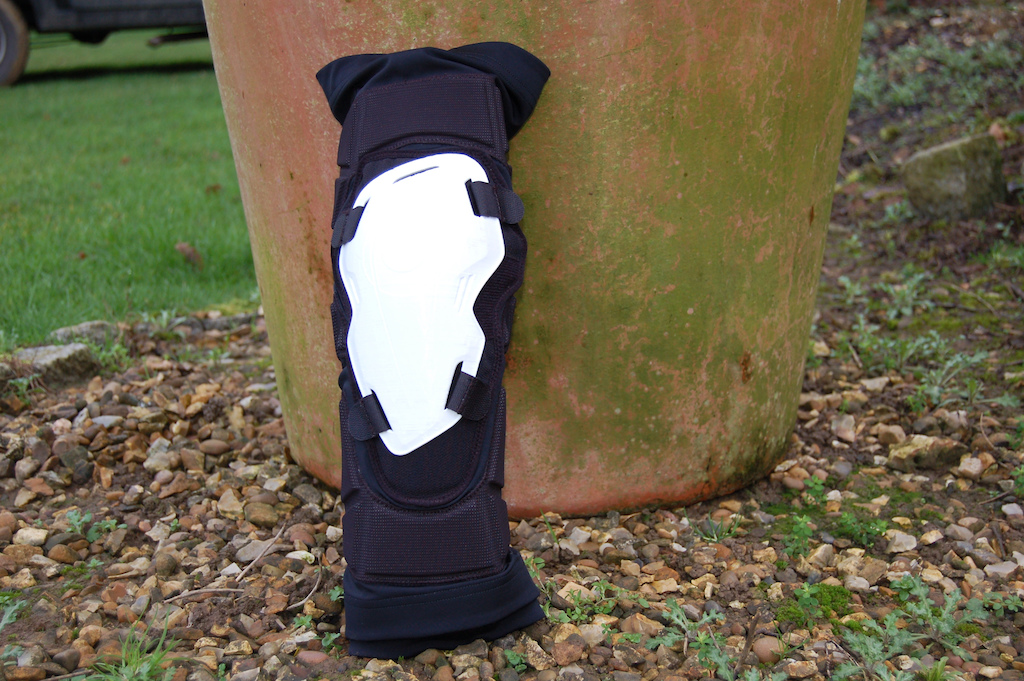 SixSixOne continue to work on their Recon knee pads that have a removable plastic knee piece (that won't be white in the final version). This padding around the side of the knee has been repositioned for this prototype. The final version of the pad should be done by Core Bike next year.

There were a few new tools from Birzman including an internal cable routing tool and a rotor wear indicator. 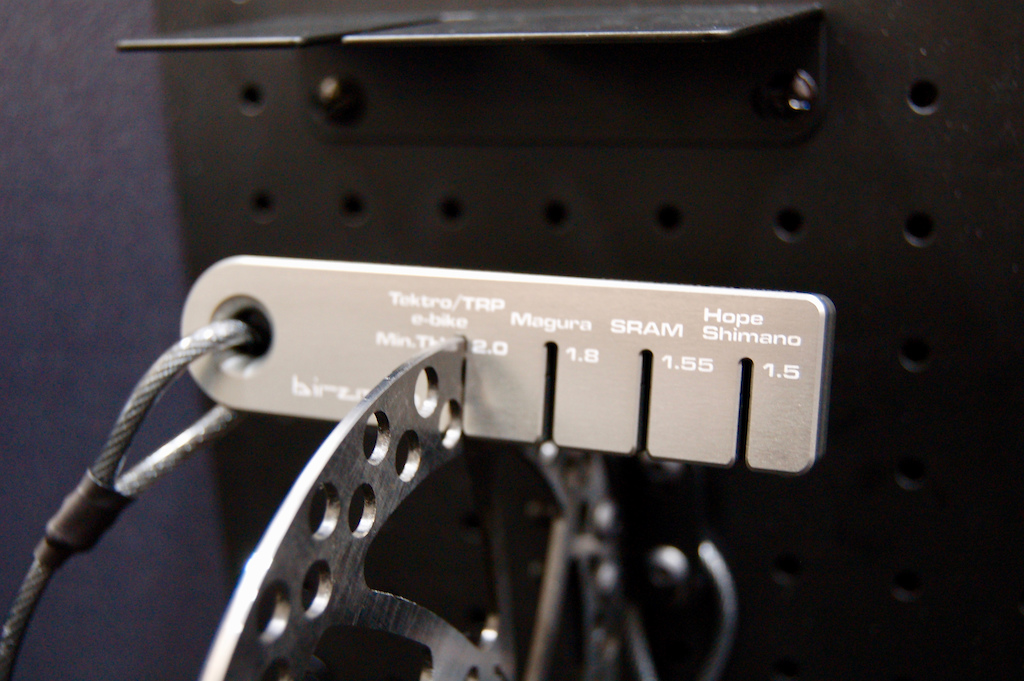 No need for a micrometer, if your rotor fits in the slot, it's time for a new one. 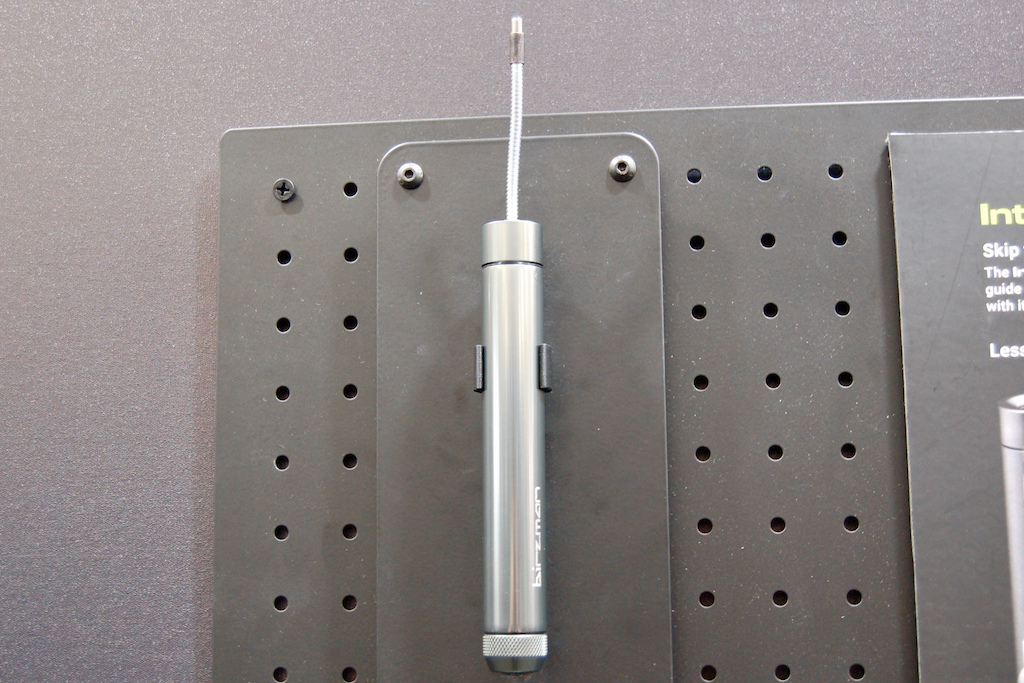 This tool uses magnets to drag your cables through your frame. It comes with fitments for housings, hoses, cables and Di2 so should take the stress out of any internal routing jobs.
Dainese 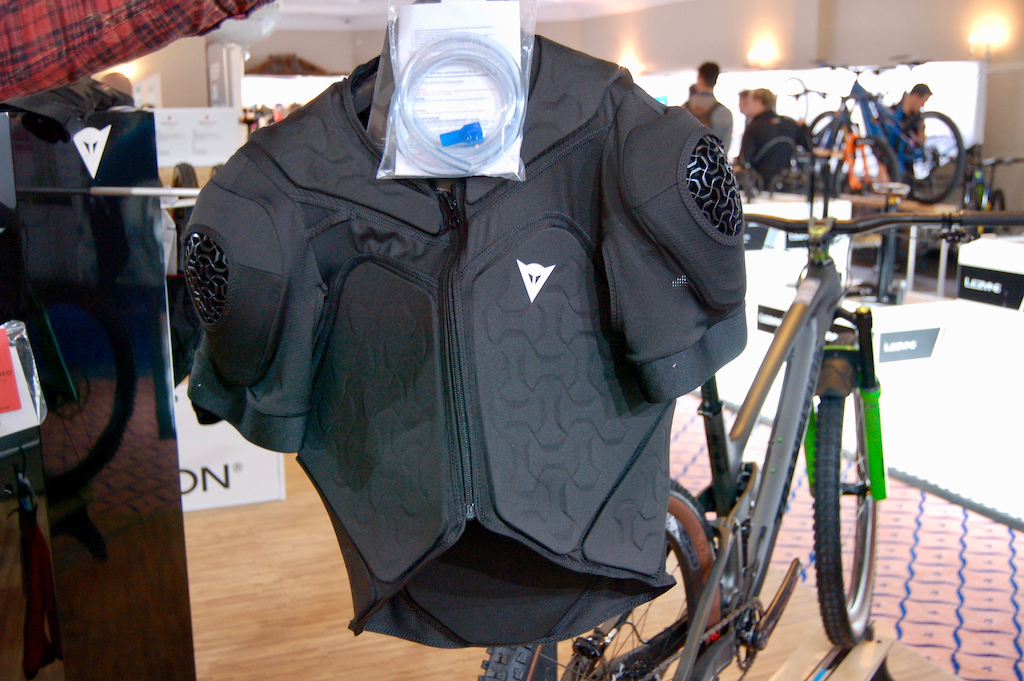 Inspired by MotoGP and, presumably, camels, the Rival Pro Vest is a set of body armour with a difference. Instead of a traditional back protector, this comes with a hard shell hydration reservoir built in. 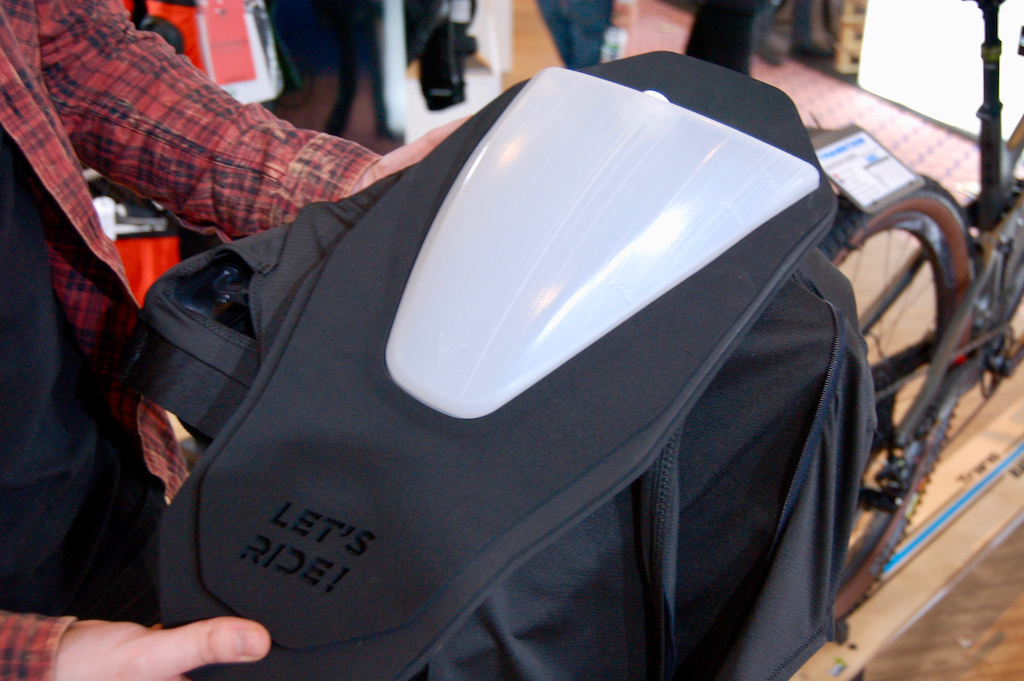 In motorcycle racing, this piece fits behind the helmet to help airflow while also protecting the rider and providing a water source. The mountain bike version only fulfills the latter 2 goals but provides 700ml of hydration and improves the certification of the jacket from CE Level 1 to CE Level 2, the level required by the EU for motorcycle riders. The vest can be run without the hydration pads or even the shoulder packs if you want. Price: £199.95.

spaceofades (Jan 30, 2020 at 17:16)
that birzman tool looks like a bad idea. Usually the rotor wears in a concave manner, this tool doesnt appear to account for that.

spaceofades (Jan 30, 2020 at 17:53)
@freeridejerk888: Because more pressure tends to get put in the middle of the pad, and rotor. check any worn disc, most of the time they're concave.

dldewar (Jan 30, 2020 at 19:29)
I knew a bike shop owner that messed with his chain tool to make most chains be worn. I see a new business model here. @spaceofades:

Mesmomesmo (Jan 30, 2020 at 22:46)
Not only that, but the outer edge of the rotor isn't supposed to be used because your pads should never be above the rotors for safety measures, so most brands have your pads hang 1mm or more bellows the rotor edge.

freeridejerk888 (Jan 31, 2020 at 5:30)
Well I meant that more sarcastic like why would they miss something like that haha @spaceofades:

wako29 (Jan 31, 2020 at 7:16)
(nearly) All rotors have indents on the outer edge of the rotor. Whenever you measure the rotor thickness - either with this or calipers - you need to measure at one of these indents to account for misaligned calipers

mtbmaniatv (Jan 30, 2020 at 17:45)
right, looks like someone was stashing bags for drinking beers in public

Arierep (Jan 31, 2020 at 5:38)
@Vyckinis: Pole does as well, and I'm sure there are more. Not interested on weight savings, I actually see the larger diameter as a feature

nordland071285 (Jan 31, 2020 at 6:48)
@booked-for-simulation: I don't own one but I asked the question a while back.. I think the answer is that it can be just serviced to a point but the cartridge is sealed and needs replacing every so often. But the cost makes it viable. I havnt bought yet because I think I want something completely user serviceable

Arierep (Jan 31, 2020 at 7:11)
@booked-for-simulation: my brother has one, he's quite happy with it.
AFAIK, you can adjust air pressure (duh) lube the seal foam doughnut and replace the cartridge unit if it dies

RonSauce (Jan 31, 2020 at 2:00)
I would bet that thing is going to cost more than twice what a basic, accurate micrometer costs.

GoWithTheFlo (Jan 31, 2020 at 4:09)
I use a micrometer to check at a few spots around the rotor and it works well. I guess if you could get a oblique enough angle (and miss the untouched-by-pad rotor edge) , you could use vernier/digital calipers too.

wako29 (Jan 31, 2020 at 7:17)
(nearly) All rotors have indents on the outer edge of the rotor. Whenever you measure the rotor thickness - either with this or calipers - you need to measure at one of these indents to account for misaligned calipers

NickBosshard (Jan 30, 2020 at 22:01)
Having seen more then one cracked ceramic caliper piston due to over extension, I'd rather change discs a bit more often. But as mentioned in the comments before, the design of the tool is flawed as discs wear less towards the edge.

Yep, you got it.
People just can use common sense anymore, its sick.

corposello (Jan 31, 2020 at 9:44)
@PinkyScar: Rotors can last like 10k plus... do people forget that they're literally chunks of steel and only tasked with stopping 150-200lbs? I've never had to replace a rotor due to wear, always solely due to contamination or getting bashed.

So futuristic and different!

just6979 (Jan 30, 2020 at 18:50)
Is cane creek going to do those solid lube bearings for headsets? Anything less than the stainless steel 110 bearings from them sucks, and the "efficiency loss" doesn't really matter for a headset. In fact, their Hellbender super-sealed headset bearings have so much drag that it's like a steering damper, so hopefully this new thing is better than that.

Loris123 (Jan 30, 2020 at 23:59)
I think the Hellbender has this Solid Lube in side, but im not 100% sure about that.
Maybe dont overtighten your headset so it still rotates. In one Bike i also have a Hellbender Headset, you can feel a tiny bit more drag while instaling, but on the trail i did not notice it anymore.

just6979 (Jan 31, 2020 at 10:40)
@Loris123: Hellbender is just extra seals or extra contact on the seals or both. I understand how to adjust a headset: even loose enough to easily feel the knock when riding, they still had noticeable drag compared to a normal CC40 bearing set tighten properly.

Chonky13 (Feb 1, 2020 at 6:49)
Are people using the carwash to clean bikes? Wouldn't that high pressure hose force water into fork seals and bearings?
I just discovered a foaming spray bottle (made for car tires) that coats the bike in a mixture of water and dish soap. Melts off mud.

steviestokes (Jan 31, 2020 at 2:04)
There's nothing wrong with cheap droppers... Its the flimsy thumb-lever that fries my brain!!! The one doing the OEM Rounds that's got a horrible 3mm bolt and bends all over the shop at the pivot.. Erghh!!

woofer2609 (Jan 31, 2020 at 7:26)
Pro tip- if you ant non fog goggles, get snow sport goggles that have doudle lenses; they rarely fog up. I've been using Bolle brand goggles and they are the bees knees for dirt biking and mountain biking.

RoadStain (Jan 31, 2020 at 2:35) (Below Threshold)
If you mean the Rocky Mountains, and if they can support bike packing? Well, let me email Greta Thunburg and verify just how damaging to the earth this behavior actually is (world ending I am sure).

blowmyfuse (Jan 31, 2020 at 10:30)
Because Vans is too busy making urban douche nozzle hiking skids to bother slapping a climbing rubber sole on their Half Cabs or Chukkas

210mm dropper that can be shortened to 190, fruck yeah

It looks they both use the same oem.

jazzawil (Jan 30, 2020 at 21:39)
@zyoungson: I have one on order but about to get an automatic refund because they're taking so long to ship it. Between Chinese New year and corona virus who knows it might be awhile

Asmodai (Jan 31, 2020 at 2:44)
i bought it like a 2 weeks ago at r2-bike pretty much immediately as they appeared on their website they still have them in stock and they ship worldwide iirc