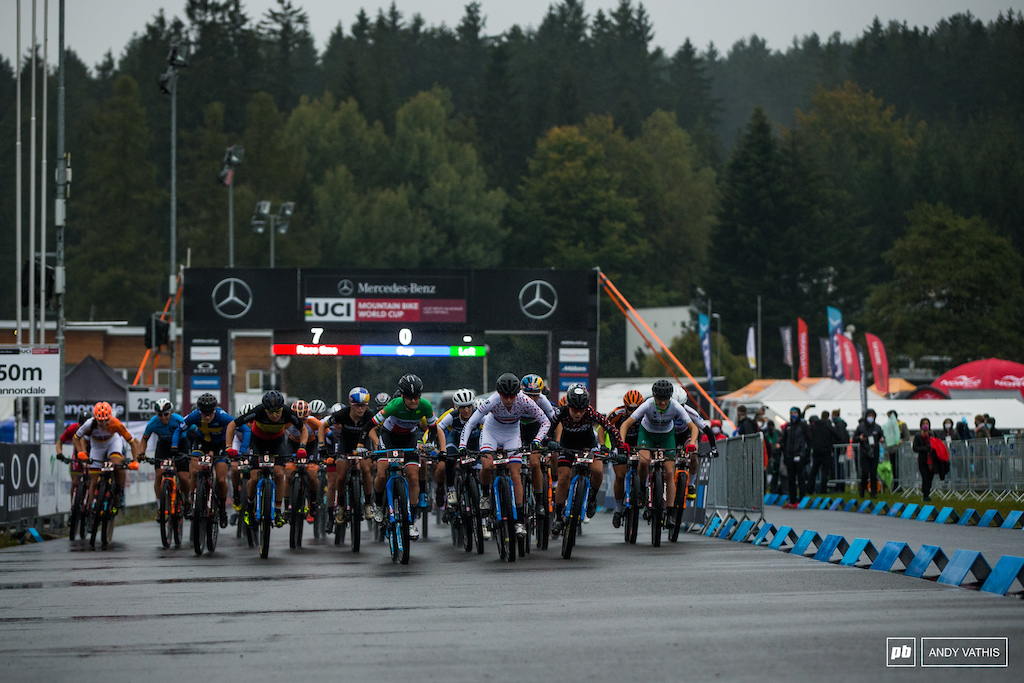 Who has some strength still in their legs and who is a spent force in this intense week of racing? We got our first indications tonight in the Short Track sprint. Back in its ususal place as a Friday night fight, we were treated to another hour of intense racing from the Czech Republic on the same track as Tuesday.

There was drama in the women's race as Evie Richards crashed while in the lead on the last lap but was able to claw her way back to the front and beat Pauline Ferrand Prevot in a sprint finish. Prevot was unhappy with the sprint though and seemed to claim she had been blocked.

The men's race also came down to a sprint and was won by Henrique Avancini with Litscher, Brandl and Vader just trailling in his wake. Tuesday's winner, Jose Gerardo Ulloa was in the lead group until the last lap when he dropped back after racing contct with Nino Schurter. 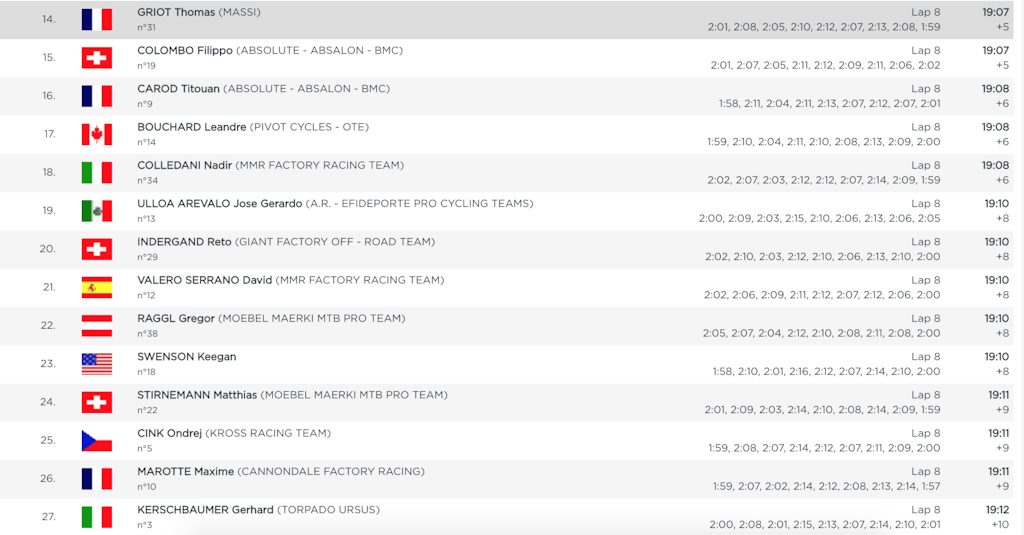 Jamminator (Oct 2, 2020 at 10:06)
Spur of the moment emotion, Prevot and Evie seemed fine afterwards. In road racing, UCI has a maintain your line rule for sprints, but I don't know if there's anything similar for XCC/XCO. Either way, Prevot had at least two more bike widths before the barriers, so she wasn't squeezed out. I think the realization she was beat again turned into an overdramatic reaction.

Giddyhitch (Oct 2, 2020 at 16:37)
@Jamminator: Bart mentioned something about maintaining a straight line to the finish as well.

Powderface (Oct 2, 2020 at 21:25) (Below Threshold)
Either Evie is playing the dumb newbie or is a poor sport. If that's how she wants to ride hopefully PFP will put her in her place next race. Hard to sprint finish when you're being forced into the fence.

WebfootWitchHat (Oct 2, 2020 at 10:59)
Avancini obviously read the comments here from yesterday. He got rid of the visor for a more aero helmet and won. It just proves Pink Bike users know way more about racing than the pros!

mtb-journal (Oct 2, 2020 at 8:25)
Richards, impressive! Awesome how she came back after the fall. I am even more a fan now. Ferrand Prevot not very sympathetic in the heat of the moment. She came from behind and profited from Richard's shadow.

Augustus-G (Oct 2, 2020 at 8:43)
Another great result for Laura Stigger too. The youngin's are definitely bringin' the heat in the wet & cold.

I hope Jenny Rissveds gets her mojo back before the end of the weekend. I know she had a concussive crash in late July and has been struggling with confidence issues since.

Jamminator (Oct 2, 2020 at 10:02)
To me, Nino chopping Ulloa Arevalo's wheel and almost taking out half the men's field (luckily the Mexican didn't go down so that didn't happen) seemed far more egregious than Evie not maintaining her line against Prevot.

aelazenby (Oct 2, 2020 at 10:41)
I have a hard time telling who's fault that was, looked like a brutal move though. What are the rules on something like that?

btbsps (Oct 2, 2020 at 11:16)
I read that then went back to the replay and didnt see anything. Nino was obviously way in front of him and Ulloa did not go forward enough for Nino to even see him on either side. This shit is ridiculous. It is more on Ulloa since he literally tried to overtake on end of road turn where everyone on every lap goes to the right which is what Nino did and Nino accelerated when that happened, if he slowed down and went to the right then u have a point. Ulloa is going to be a force to be reckoned in few seasons and I'm looking forward to seeing him in podiums. But he needs to calm down a little bit and make better choices. He would not have a good reputation if he actually crashed and injured a lot of pro vets.

Jamminator (Oct 2, 2020 at 12:31)
@btbsps: You might want to rewatch the video... Nino was on the far left of the pavement then cuts toward the far right of the pavement before going clear of Arevalo. Arevalo rode the same speed throughout, because his position alongside Avancini never changed.

Offrhodes (Oct 2, 2020 at 12:43)
@Jamminator: I put more blame on Nino in that situation too. He appeared to swing hard right. Arevalo has skill to keep it rubber side down and good job of everyone right on his wheel too. I see it as a poop happens situation and luckily everyone stayed off the ground.

Jamminator (Oct 2, 2020 at 12:45)
@aelazenby: The UCI verbage is just ambiguously written to state the race commissionaire(s) can make a suitable punishment (fine, penalty, etc) for incidents they deem it was necessary, but it was an honest mistake and wasn't nefarious in nature by any means, so it's live and let live. Racing incident and move on.

EDIT: Personally, I don't think it was that big a deal. Had Arevalo crashed and taken out a lot of riders, it would be getting talked about much more seriously. I only brought it up because in context Bart and Rob made more issue of the Prevot incident, which I think was even less newsworthy.

btbsps (Oct 2, 2020 at 13:06)
Ive rewatched and just at mark 17:59 Ulloa have the slight center line as he leads, Nino have opening on the left with plenty of space between Nino and Ulloa. Then as Nino start to pass at 18:00, Ulloa took a left into Nino line, then Nino continue to overtake to the right in gradual stable line as a leader into next right turn. That overtake was very clean and respectful. Ulloa did not want to let Nino have a clean pass when Nino deserved one and continued to tail him til he realized he had somebody on the right. Just watch how Ulloa ride his lines as a leader, he is everywhere.

btbsps (Oct 2, 2020 at 13:16)
@Jamminator: go to 15;59 mark you will see Ulloa riding recklessly on the left nearly causing the guy with orange fork to crash then 16:00 mark, Ulloa does literally the same thing Nino did a lap before on the same exact turn. And he took a similar but more aggressive line from the left to right with what 5 guys on his right. The other guys did not chase his tail the way Ulloa chased Nino tail on the next lap, otherwise Ulloa wouldve caused oh wait in my world that is called friggin mtb racing. move on guys its just simply racing.

magnusc (Oct 3, 2020 at 6:52)
@btbsps: Ulloa is riding it like a gentleman the round before. He holds his line and goes slow to the right when the turn comes. The problem with Nino is that he goes hard from far left to the far right long before the turn. Looks to me like he swerves right halfway up the climb. He could have spend a lot more time changing line from left to right. It’s a douchebag move, not worthy of a World Champion, and a lot worse than Evie slowly going the right over 100 meters.

Ulloa crashed in cross country event and couldnt even compete outside of short track circuit. He won't even place top 10 tomorrow. He has a long way to go since his ego is in the way unfortunately. Those who are new and humble, always have the best success. And I love Evie, I have Evie and Nino as world champions for next 3 years. French women are so annoying

ilyamaksimov (Oct 2, 2020 at 8:34)
how not beautiful the prevot behaved at the finish line, offended

Um, this is racing, not time attack.

IMPO, Pauline's reaction is that of someone who just had the crap scared out of them. Scared to pissed in one brief moment. Evie was drifting hard left and don't think Pauline knew if she was going to run her clean off the track or not.

kclw (Oct 2, 2020 at 12:33)
Technically once you start sprinting you have to hold your line. You are not allowed to deviate line to block other riders. On the road riders get relegated in sprints all the time for closing the door. In this case it looks like Eve was sprinting in a straight line, her straight line just happened to be a bit diagonal.

Augustus-G (Oct 2, 2020 at 14:18)
@kclw: Agreed. When she comes down off the hill onto the final straight she's on the far right side of the track. By the time she swerves back right she's within a bikes width of the left edge of the track. She swerves back right just as the camera view is changing as they close on the finish line. Just after Pauline flipped a hand in her direction as matter of fact. I don't think there was any malice involved but she certainly covered a lot of latitude. She's young, she'll learn.

Gavalar66 (Oct 2, 2020 at 9:34)
I should have put money on my earlier prediction, amazing rides by Evie and Pauline, I love this format as it's proper racing against your fellow riders, shoulder to shoulder, it puts other disciplines in the shade for edge of your seat viewing.

nattyd (Oct 2, 2020 at 12:39)
Unless I misunderstand Ulloa's name, it sounded like the commentators were mistakenly calling him Ochoa the whole time? If I remember my high school Spanish, it should be "oo-yoh-ah" no? Ochoa is a common but totally different name, right?

If so, pretty disappointing that Bart and Rob didn't take the time to learn his name. Winning a World Cup short track should at least earn him that much.

AdamKos (Oct 2, 2020 at 15:03)
In the beginning of the race, they mentioned they were pronouncing his name wrong during the first race and then asked how to pronounce it correctly so they could get it right this time. I still have no idea how to pronounce it. Honestly, I can’t believe they can pronounce half these names.

vinay (Oct 2, 2020 at 8:38)
Yet I prefer the rasta fork shown left. The big OEM manufacturers obviously have a big hand in sponsoring these athletes but everyone loves a bit of variation. Magura left the suspension arena but Suntour used be pretty big in XC, aren't they still? Just like SRAM and Fox now, they may need to adopt a signature colour at least to slap on their "factory" teams so they'll actually be noted.