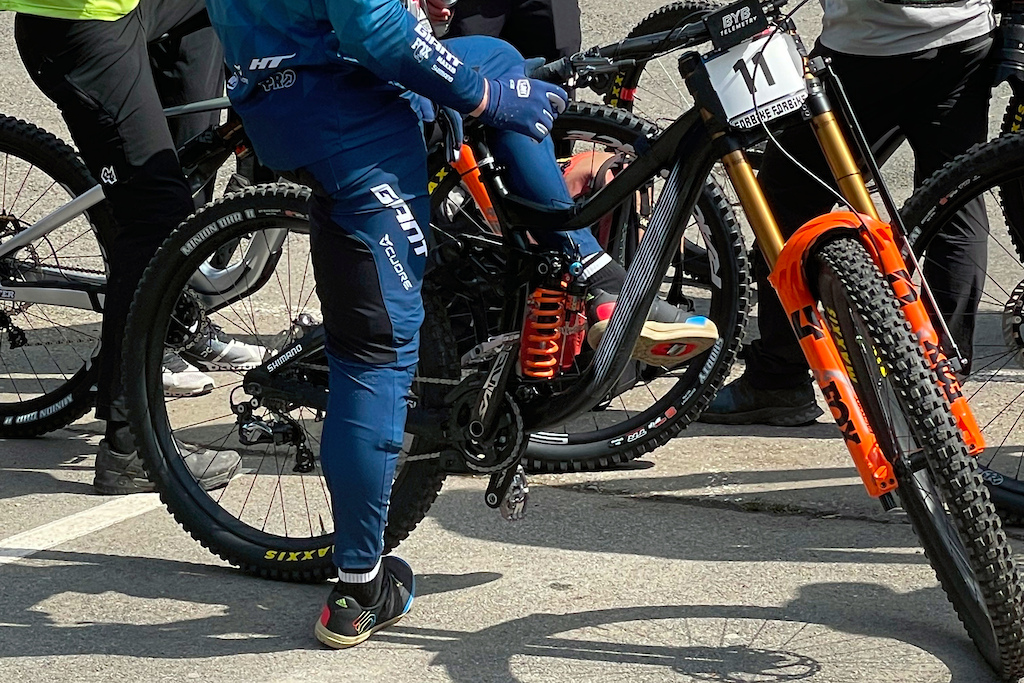 The bonanza of new bikes keeps coming this weekend as Remi Thirion has been spotted on a new Giant Glory.

Thirion signed with the Giant Factory Off Road Team at the start of last year and was seen riding a couple of prototypes in the latter half of the 2021 season. That development cycle looks to be continuing into 2022 as we've spotted this latest version of the Giant downhill bike.

Interestingly, Giant hasn't jumped on the high pivot train with this new frame and the suspension design looks to be largely similar to previous Giant models. However, compared to the bike Remi was riding last year, it looks like the front triangle shape has been subtly tweaked in shape, for example with a curvier profile and a longer headtube junction.

There have also been changes made to the rear end with a reshaped drop out and a flip chip on the rocker, although we aren't sure if that wasn't already built into the previous prototypes. 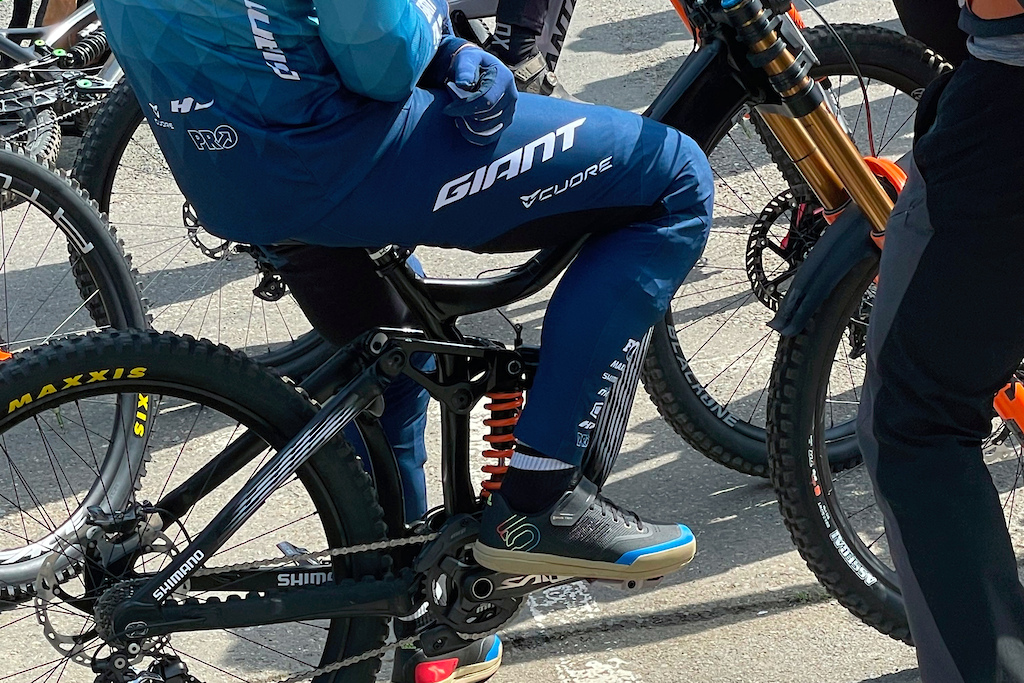 Note the flip chip on the rocker.
A photo of the previous prototype can be seen in the third picture of the below Instagram slideshow:

While Remi's mechanics couldn't tell us any more information about the frame, we have reached out to Giant and they told us, "the team (GFORT) has been testing multiple generations of prototypes, over the past two seasons (this is the third) , with the goal of perfecting the next generation DH bike from Giant". 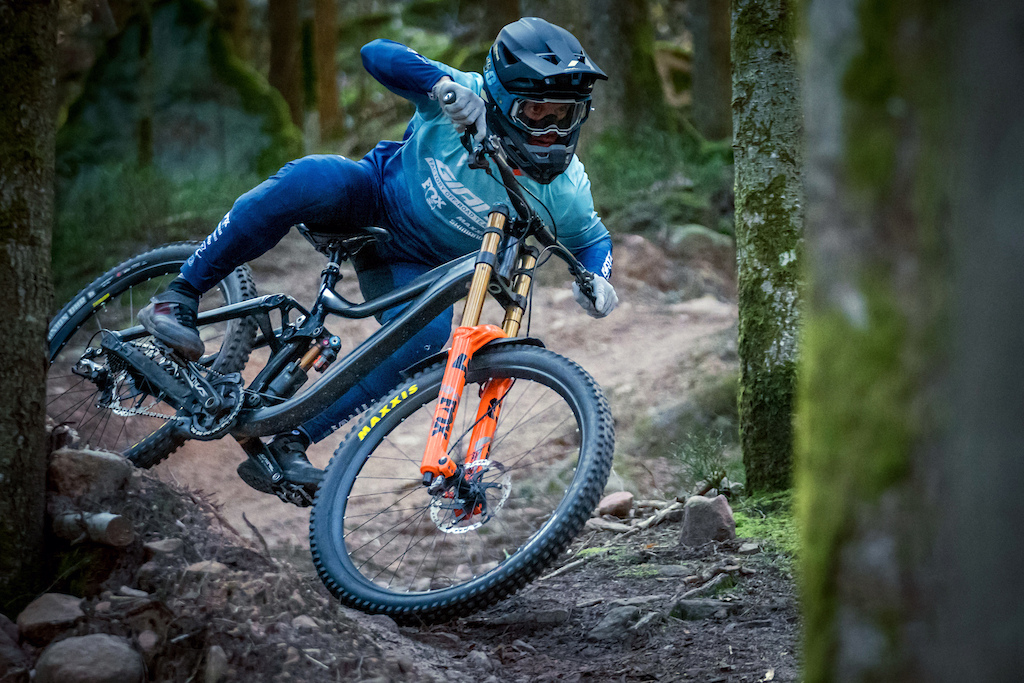 Giant teased the bike in a recent press release that seems to have flown under the radar.

AlexBroach (Mar 25, 2022 at 7:24)
"Giant teased the bike in a recent press release that seems to have flown under the radar" lol giant hasn't been on the radar for a bit

Glory831Guy (Mar 25, 2022 at 9:52)
Older Glory + Trunnion mount + bridged rocker link. Basically adopting all the design language from the 2017 and newer Trances/Reigns like the rest of the line.

Funny how most companies innovate their DH bike first, but in Giant's case, it was the 2017 Trance that was the proof-of-concept.

styriabeef (Mar 25, 2022 at 12:58)
In Giants defense I have to say, some bikecompanies overdue it with designiterations - cough, cough, commencal, cough.
As long as it's a solid bike, the rider is happy, why change it all the time? If the bottom line is, that less expenses for questionable prototyping, trickles down to cheaper but good performing entry level bikes, everybody wins. They don't want to be on the forefront and riding the wave, that's fine. They have a race program and someone in one of these forums told that they support their racers decently.

styriabeef (Mar 26, 2022 at 11:50)
@8tom8: true, yet giant is still the biggest bike company. Don't know about Giant's revenue though. My point is - whatever works. Giant may get flak for not prominently developing new DH designs. But they seem happy. Commercial is pushing the envelope in Dh racing, yet I don't see a lot of their bikes around. Still, max seems happy.

JohSch (Mar 27, 2022 at 1:11)
Remy did better on that oh so old design than every Intense rider f.ex. Curious for the chain stay length, the Prime Thunderflash already has 460 with 160mm of travel and giants own Maestro 29ers currently end at 146mm

melonhead1145 (Mar 25, 2022 at 7:30)
Pretty sure he was riding this one last year and no one picked up on it. He was riding an alloy frame with similar graphics

Plancktonne (Mar 26, 2022 at 0:29)
Did you ride any? I don't own one, but everytime I jump on friend's Reign I'm amazed how well it rides, the suspension kinematics are sublime even without 1k$ shock.

Bleeder (Mar 25, 2022 at 9:09)
Giant proves once again that they’re only in racing to have their name out their. With as deep of pockets as they have, if they wanted to dominate DH, they could probably accomplish that within 2-3 years. But that’s not they’re goal. Just be good enough to sell some bikes.

Mntneer (Mar 25, 2022 at 9:20)
Are you saying that there extensive female racing program is just to sell bikes and not because they support women and racing?

Afterschoolsports (Mar 25, 2022 at 9:52)
It’s almost like the organisation has a diverse range of goals, rather than just one. Who is going to tell them that’s not allowed according to the pb comment section?

Canadmos (Mar 25, 2022 at 9:54)
Isn't that why any manufacturer gets into racing? I'd wager a bet that their goal is to promote their brand and product, not blow through money for no reason.

Bleeder (Mar 25, 2022 at 14:19)
@Mntneer: for what it’s worth, my comment was specifically about Giant’s factory world cup DH team. Not about the company as a whole, and not about Liv cycles, where they have done great things for women’s mtb, and I fully support that.

Protour (Mar 25, 2022 at 7:23)
"Interestingly, Giant hasn't jumped on the high pivot train with this new frame and the suspension design looks to be largely similar to previous Giant models."

Not interesting or surprising, in fact totally predictable.

In the year 2032, are you still gonna say it's interesting that Giant has stuck with it's outdated, low Pivot, DW link wannabe suspension design?

mhoshal (Mar 25, 2022 at 8:14)
I don't think it's outdated at all I think they just managed to get it right from the get go. Maestro link works exceptionally well and the fact that it is similar to a dw link isn't a bad thing. At least it's more original then just making another 4 bar horst link high pivot bike like every other company out there right now.

Bro-LanDog (Mar 25, 2022 at 14:21)
What if I told you we likely wont see drastic suspension geometry changes to bikes for a long, long time.

way2manyhobbies2keep (Mar 25, 2022 at 9:02)
year 18 of a virtually unchanged bike after Giant knocked off the iron horse sunday and made a direct infringement on Dave Weagles DW link. Bad company without any innovation

mhoshal (Mar 25, 2022 at 17:17)
Go look up Dual short link bikes and you'll find Weagle and Giant filed patents at the same time and if you wanna get really technical Schwin had a dual short link bike out almost a decade before Weagle ever filed a patent so if anything Weagle just ripped off Schwin. But in reality they all took inspiration from ski doo suspension.

Dbonevelle (Mar 25, 2022 at 9:26)
Giants are clearly not the best but they do well for entry level riders. Just sayin