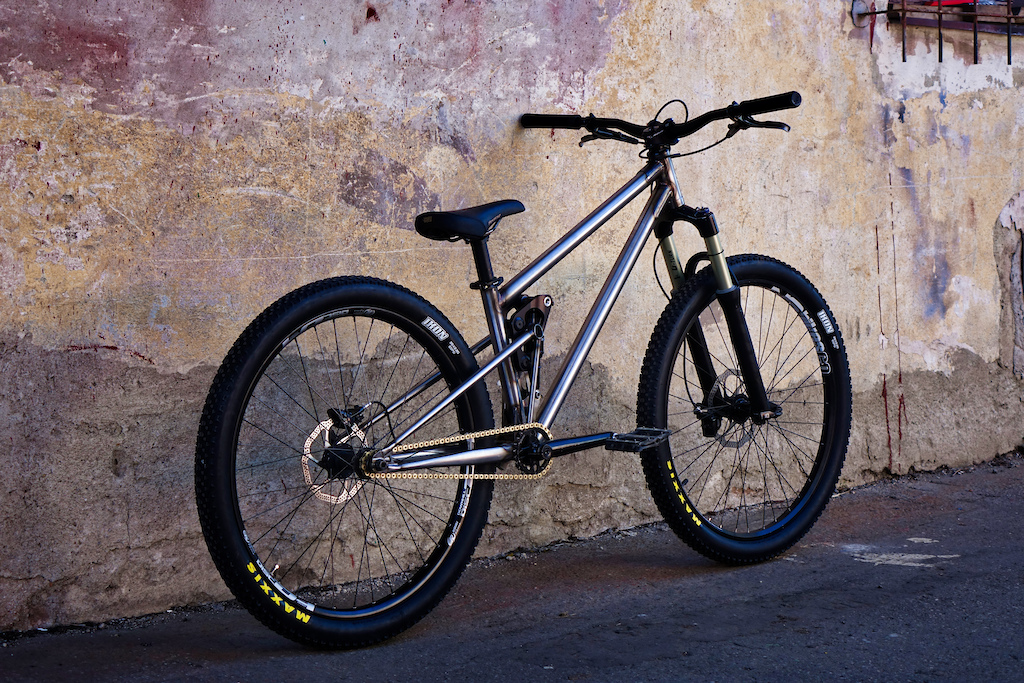 You may remember Martin Saida, of Zoceli Bikes, from his wild, sliding shock Dobordelu, inspired by the Yeti 303 DH. We knew it probably would't be long until we got a follow up to that bike and now that it has come, we're glad to see Martin has kept his streak of quirky suspension designs going.

Martin's new bike is the Zoceli Nanetro, a 100mm travel, full suspension slopestyle bike. Slopestyle isn't an area we often see touched by smaller frame companies, but Martin took a look around at other slope bikes on the market and said he felt they "mostly use a simple single pin that is not very active." In his search for something more progressive, he decided the best bet was simply to create his own.
Zoceli Nantero Details 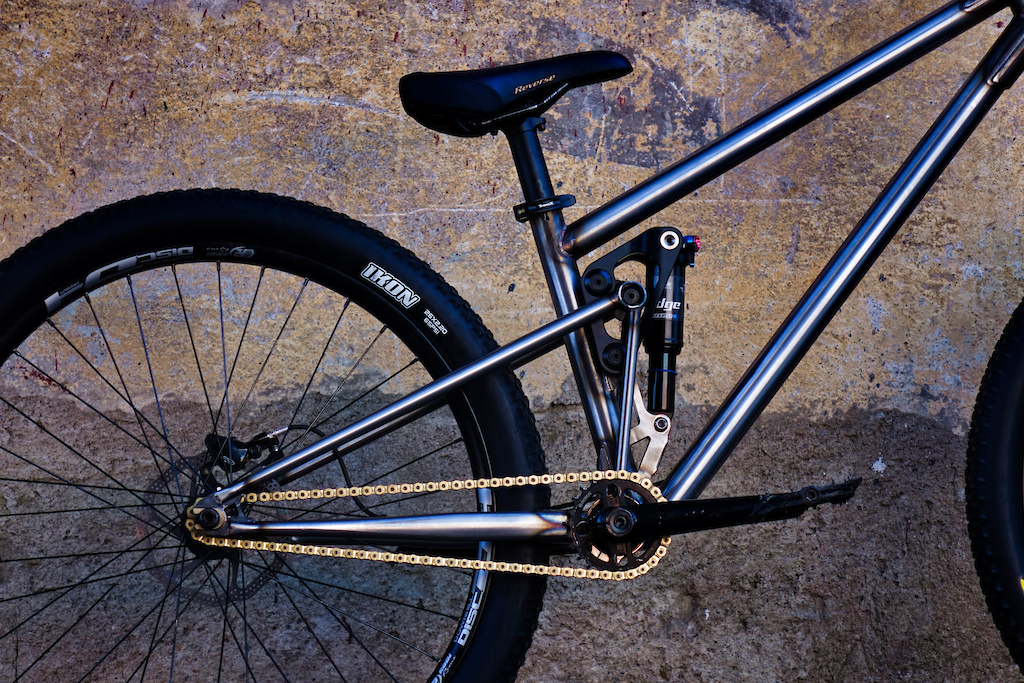 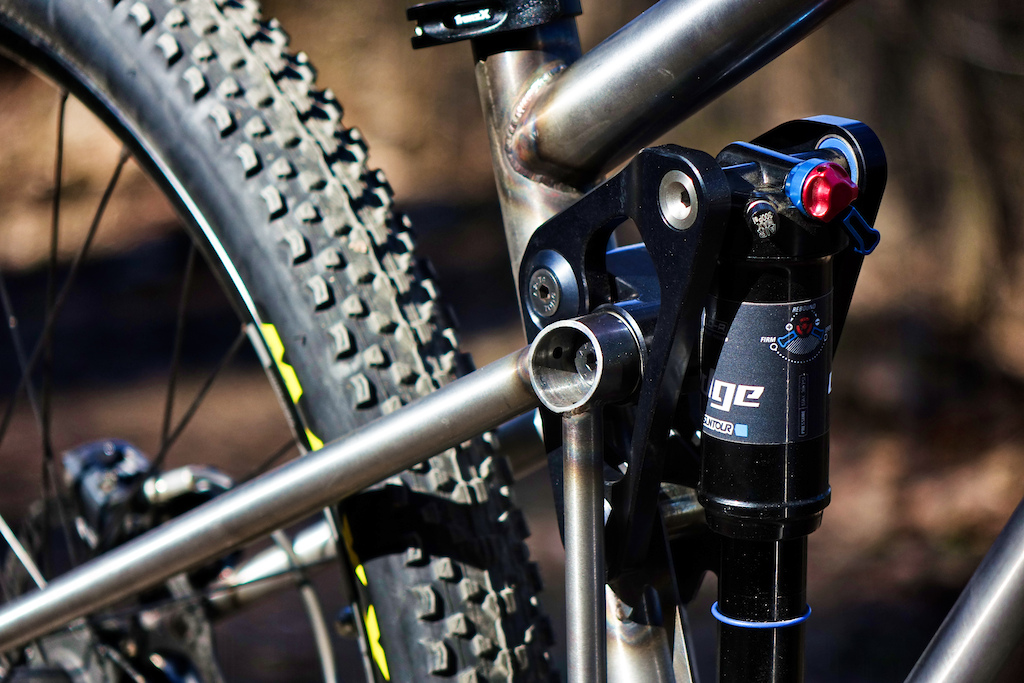 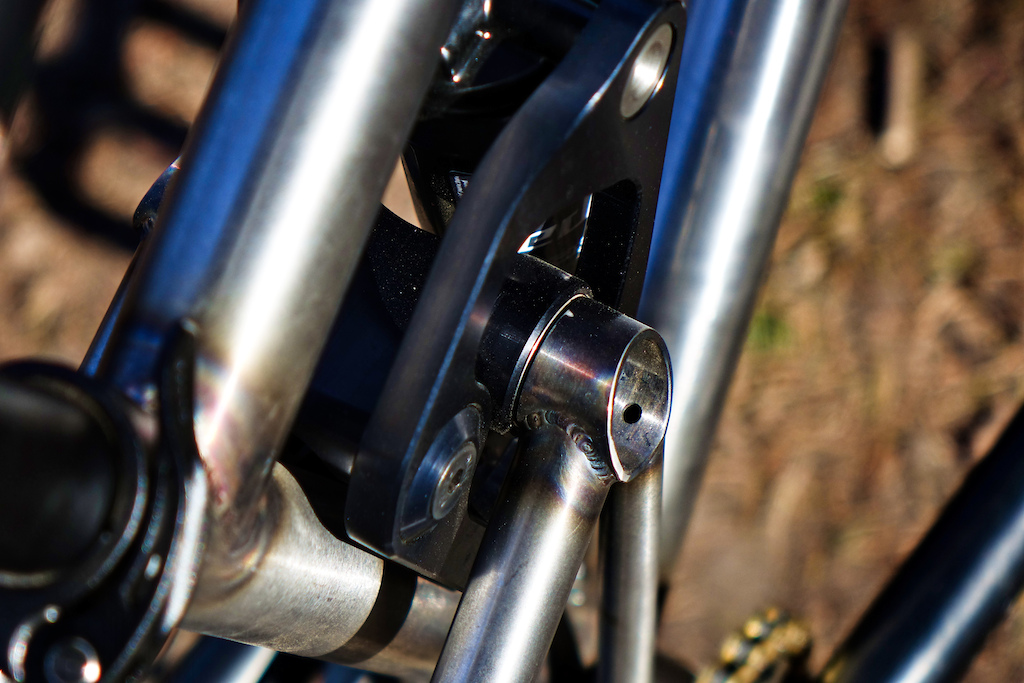 The suspension design is reminiscent of the previous generation Scott Gambler
When your brand name is the Czech word for 'Steel' then it's almost compulsory to build your bike from that material. Martin elected to use Columbus tubing for the front triangle and seat stays and Dedacciai for the chain stays. The frame is only available in one size for now with 26" wheels, a 430mm reach, 68° head tube angle and 78° seat tube angle, although to be honest, you probably won't be sitting down for long enough on this bike to care about that.

Martin had two goals in mind when designing the suspension for this bike - 1. make it more progressive than similar bikes on the market and 2. ensure the rear wheel rotates around the bottom bracket so that the chainstay length remains the same through the travel and therefore you don't need a chain tensioner to run it as a single speed. The result is a suspension system that looks like a standard rocker-driven single pivot but actually functions slightly differently when you look a little closer. Take a look at the video below to see it in action. 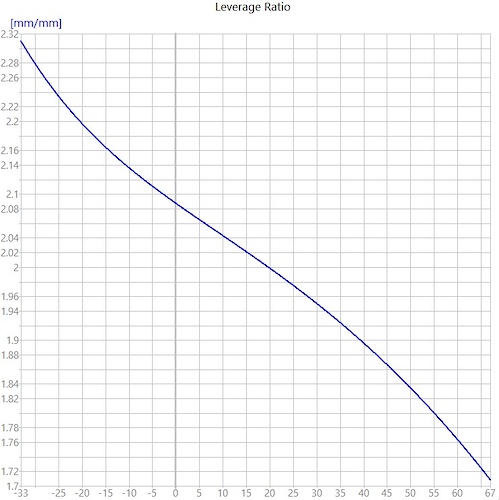 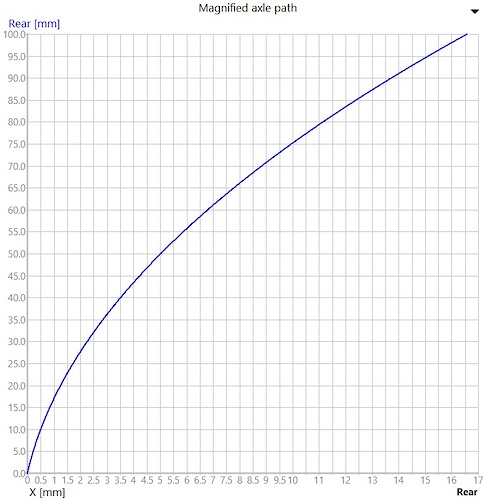 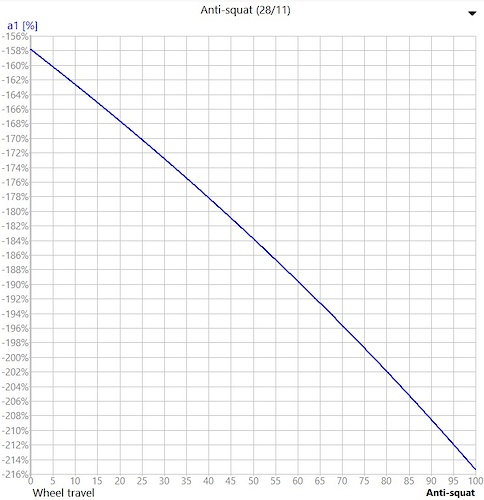 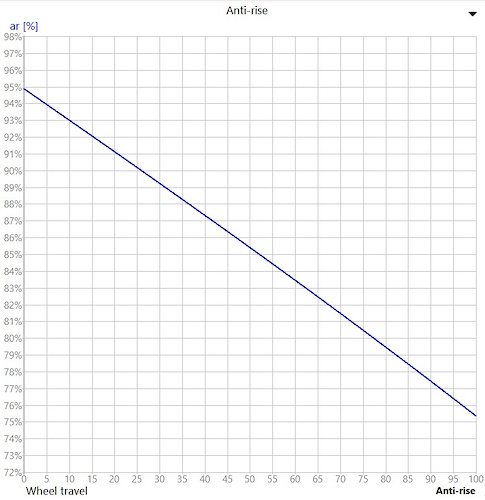 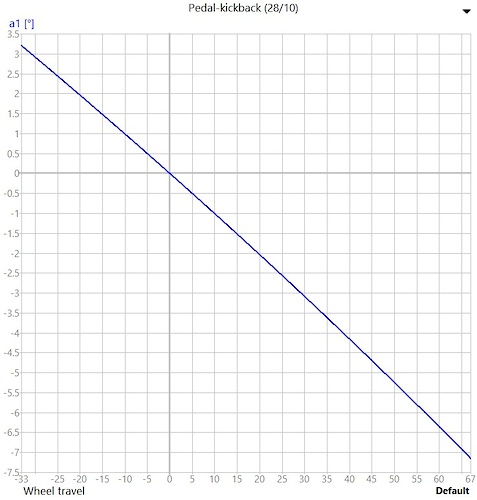 The Nanetro project took Martin around 18 months to complete although it was mainly a side project to producing Naosm enduro frames and working on a Mk2 version of the Dobordelu, which he is hoping to have completed soon. Martin has not only been testing this bike on jumps but also to spice up his local trails, which he says can sometimes be too easy on a full-blown enduro bike. Testing is still ongoing on this frame, but Martin says he is taking pre-orders for €1,800. More info, here. 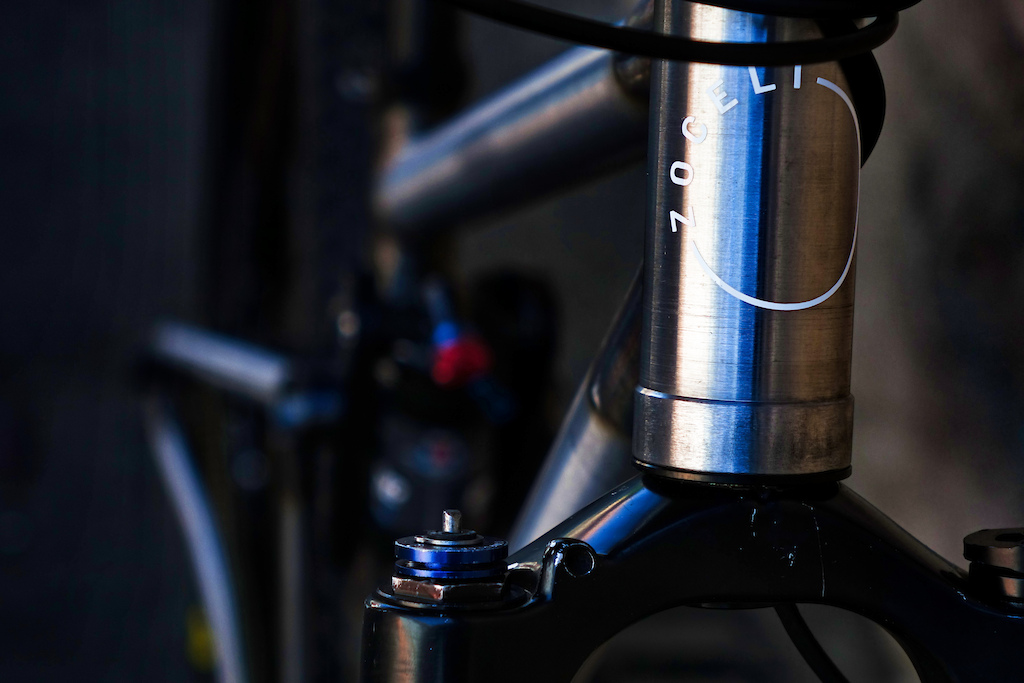 iamamodel (Apr 26, 2022 at 4:47)
@fracasnoxteam: I just had a look - the way the swingarm drives the shock is exactly the same. www.youtube.com/shorts/AYvM7NVG7pQ

gabriel-mission9 (Apr 25, 2022 at 12:05)
Looks much like a Blackmarket Killswitch and it's Hammerlink suspension design.

Tarka (Apr 25, 2022 at 12:18)
@ jamessmurthwaite can we get a side-by-side of the kill switch and this? This doesn’t look like a direct copy, but curious about the similarities. As I recall, the killswitch didn’t do that well due to some kinematic gripes from riders/reviewers.

mikekazimer Mod (Apr 25, 2022 at 12:33)
@Tarka, you can see the Killswitch here: www.pinkbike.com/news/blackmarket-killswitch-detail-2010.html. The most obvious difference is the lower shock mounting position. The Zocelli has the shock mounted on the seattube, while the Killswitch's shock is attached to the swingarm.

gabriel-mission9 (Apr 26, 2022 at 2:16)
From a design perspective, none of the above differences are that significant. The kinematics could of course be wildly different, due the location of relevant pivot points moving by a few mm, but the overall layout of the suspension design is essentially the same. Mounting the shock to the swingarm, or direct to the rocker or the dogbone link, doesn't fundamentally change the design.

Zoceli-bikes (Apr 26, 2022 at 4:28)
@mikekazimer: Thanks Mike for the explanation, but I'm afraid it's an unnecessary effort for some other people

Zoceli-bikes (Apr 26, 2022 at 5:14)
@gabriel-mission9: I understand the view of the average user and agree that the suspension is similar but these small details make the frames very different. Cheers

gabriel-mission9 (Apr 26, 2022 at 7:52)
@Zoceli-bikes: Lol. No they don't. The designs are fundamentally the same. As I stated previously, the kinematics could be wildly different due to very small changes to the lengths of various members, but the layout is fundamentally the same. Much like the older Trek FullFloater design is fundamentally the same layout as the newer designs that mount the lower shock pivot to the front triangle. It would be disingenuous to claim that either design was unique or a wild change in direction from what came before. There are only so many different ways a suspension platform can be laid out without making it essentially worse. That the design in question here is an evolution of something that came before is a good thing. If the design was truly unique and never before seen, there would probably be a good reason no one had done it before, it would probably perform poorly. Change isn't always good. In fact at the pointy end of a sport, wild changes are usually a bad thing. Hence the reason so many modern bikes "look like a session". It is a simple and extremely effective design. There is no need to claim you have reinvented the wheel., when this design looks like an evolution of the hammerlink layout.

GBlanco (Apr 26, 2022 at 8:11)
@gabriel-mission9: linkagedesign.blogspot.com/search/label/Black%20Market?m=1
Looks at the leverage ratio graph (green line).
The BM began regressive and finish massive progressive. The BM total progression +massive.
The Nantero have a (soft feeling) first part curve, then strength middle line that end +progressive... So very difficult to describe, but it's so different. Even the total progression change of the Nantero (34%) is not that crazy massive of the BM (75%)

gabriel-mission9 (Apr 26, 2022 at 8:47)
@GBlanco: Yep, as I said, small changes in the lengths of various links can have a huge effect on kinematics. This however is in no way inherent to the design or general layout. I could build you two FSR linkages that look almost identical but have wildly different kinematics. They would still both be an FSR. I could build you a linkage driven single pivot and a dual short link design with essentially identical kinematics... This is of course true of any suspension layout. A design doesnt have to be unique to have different properties. Nor do to similar designs necessarily have the same properties.

The R3act platform is truly unique. Literally nothing else is even similar. It's also not very good.

The Zoceli is basically a linkage driven single pivot, with a very similar layout to a killswitch. This isn't anything to be ashamed of.

madmon (Apr 25, 2022 at 12:19)
burn me if you must but if someone with a large seedbed rode that he could get his nuts cracked. Bikes that have possible pinch points scare me. Other than that it is a beautiful looking frame.

ethanshredz (Apr 25, 2022 at 17:27)
Can someone explain the last graph to me? How is it possible to have pedal kickback on a suspension design with zero chain growth? Shouldn't the graph just be a straight horizontal line, or am I misunderstanding somehow?

toast2266 (Apr 25, 2022 at 21:34)
I was mulling over this too. I think it's because, as the suspension compresses in an arc, the freehub is effectively rotating backwards around the axle (assuming the wheel stays stationary on the ground). So that'd produce pedal kickback. And I think the cog size would impact how much kickback you get too.

Jakesmith32 (Apr 26, 2022 at 8:24)
@toast2266: Gearing, hub engagement, and speed are all factors in pedal kickback. This is why things like OChain exist, or why DT Swiss advertises the benefit of their lower engagement 18T hubs. It is mostly only a consideration at low speeds (slow tech drops and such) when the amount of pedal kickback is faster than the rotation of your wheel and is able to take up the slack in your hub engagement (better explained here www.dtswiss.com/en/wheels/wheels-technology/engagement-angle-technology). For full suspension DJ and Slopestyle applications, most are keen for higher engagement hubs so that you can get more precise pedal inputs at the top of a short drop in for example, and upon (the usually quite smooth) landing you are typically going fast enough that it probably won't experience pedal kickback.

FuzzyL (Apr 26, 2022 at 8:27)
@toast2266: Exactly, and that‘s where all bottom-bracket cocentric designs are horribly flawed. If you get your hands on a bike like that, do a trackstand, pull the rear brake and try bouncing up an down a little…

justinfoil (Apr 26, 2022 at 9:06)
DT agrees with @ethanshredz. From @Jakesmith32 's link, in the "PEDAL KICKBACK" section: "This would not happen if the pivot point of the rear swing arm was exactly on the bottom bracket."

@toast2266: as the freehub effectively rotates "backwards", the entire system rotates forward, canceling out at least some of the kickback. I think you've got something with the cog sizes, but that would just move the starting point of the graph up or down, I don't see how it changes the slope away from a horizontal line.

That's some definition of "not very active", when you're looking for approximately _negative_ 180% average anti-squat. Not sure where that assumption comes from though: a quick search for "full suspension slopestyle bike" shows a LOT of either: BB-concentric single-pivots, which are going to have similar anti-squat and activeness; or pretty low single-pivots, also going to have pretty low anti-squat and be similarly active.

Also, not sure how there is any positive pedal kickback, even just a couple degrees, because the chain-line length is literally unchanging through the entire travel. I do get the negative kickback because the entire system from BB to dropout is just rotating clockwise (from the drive-side), so the cranks can also rotate CW the same amount.

anchoricex (Apr 27, 2022 at 11:49)
The stitched720 is still the best looking slopestyle bike change my mind. One thing I've seen is a lot of slopestyle athletes just ride hardtails now, most of these bikes are too heavy and not nimble enough to throw around as much as they need. The stitched720 was the only bike I've seen that seemed to check the boxes of being close enough to a hardtail but have a little extra cush for the big landings, but hell even the main riders of that went back to hardtails. The c3 athletes obviously rock their ticket-s's but they're just getting free frames a couple times a season it seems, I'd build free bikes up and ride them every chance I could.

Jakesmith32 (Apr 25, 2022 at 15:48)
I surely can't be the only one who got a bit of a chuckle seeing the axle path charted for a bike with it's pivot at the BB. Absolutely beautiful linkage design nonetheless.

hamncheez (Apr 25, 2022 at 13:28)
That (specific) S shaped compression curve is the stuff of dreams. Brilliant. All the progression is at the beginning and the end. We need that in longer travel bikes.

This chap does DJ's as well

AndrewFleming (Apr 25, 2022 at 19:09)
A few single speeders out there had to change their shorts after watching that video.

freestyIAM (Apr 25, 2022 at 12:32)
Lol, we get the kinematics of a slope bike where it matters the least but kinematic analysis has disappeared from all the other bike review. Thx Outside. #fliptheskript #givethepeoplewhattheywant #pbnailedit

mikekazimer Mod (Apr 25, 2022 at 12:37)
I'm not sure what you're referring to - all of the most recent standalone bike reviews include kinematic discussion:

If you're thinking of the Field Test reviews, we don't go as in-depth on the suspension discussion - we focus more on the actual real-world ride feel and performance for those ones.

freestyIAM (Apr 25, 2022 at 12:40)
@mikekazimer: ya I was thinking of the field tests. Glad the stand alone reviews still have kinematics. Thx for the correction and sorry for the misplaced saltiness.