Hot on the heels of winning the Cooper Tire Oregon Trail Rally and securing third in the National Driver’s Championship (ARA), Brandon Semenuk has released his latest Raw 100, although this time it’s on four wheels instead of two. 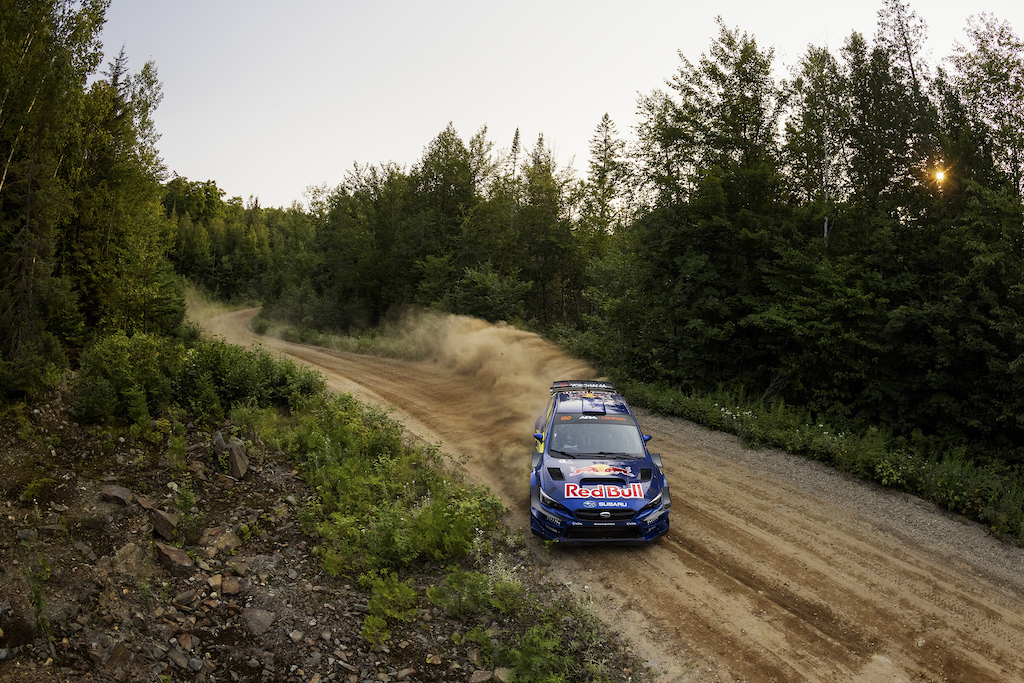 Brandon Semenuk and filmmaker Rupert Walker have continuously set the standard for what’s possible within the limits of the Raw 100 video series. The duo went viral in 2015 — with the release of their first mountain biking rendition — and again in each consecutive year since. Now, Semenuk, co-driver John Hall, and Walker travelled to the dirt roads of Montpellier, Quebec to take on their most ambitious project to date: the first-ever Rally Raw 100. 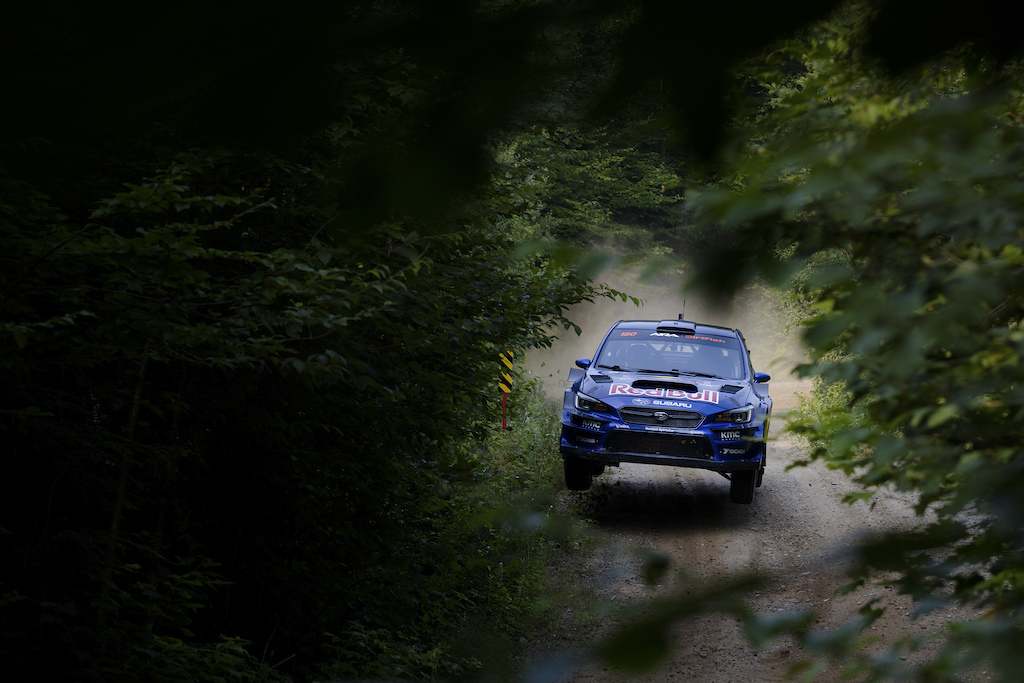 daveanjos (Nov 18, 2021 at 9:36)
RedBull must have kicked into the PinkBike Christmas party fund.

kokofosho (Nov 18, 2021 at 11:23) (Below Threshold)
PinkBIKE not PinkPETROL. You are really trying to defend motorsports on a bike website? How is this relevant to bikes? I cannot wait to find out what Brandon Semenuk does at the grocery store.

Jo-rides (Nov 18, 2021 at 11:26) (Below Threshold)
Why publish articles on biking carbon footprint and manufacturers concerns on environmental issues if the same week we get articles promoting rally racing?

NealWood (Nov 18, 2021 at 12:19)
When one of the best riders in the world does something else and is successful then it is biking news.

swellhunter (Nov 19, 2021 at 5:06)
@fenderdude345 Interestingly a quick look at your profile and activity finds you commenting favorably on a post about craft beer on a biking website.

weebleswobbles (Nov 19, 2021 at 12:23)
@Heidesandnorth: too old to thumb his nose but not shake his fist whilst yelling you little shits!

Tarka (Nov 19, 2021 at 8:40)
@pourquois-pas @Caiokv: hill-climb rally stage to downhill trail self-shuttle, get a few others involved too. Def have to use the mini.

beestrangler (Nov 18, 2021 at 9:18)
@CantClimb: The average PB user is probably about as close to his driving skills as they are to his biking skills.

danstonQ (Nov 18, 2021 at 12:07)
He's certainly inspired by the Nico Vouilloz' palmares concerning rallyes. Check it out.

Brandon should try the Monte Carlo rally it is so much fun !

cashew (Nov 18, 2021 at 23:01)
the difference between video makers Ken Block, Pastrana and strong rally drivers. Cool performance by Semenuk though, who's main job is not being a rally racer

friendlyfoe (Nov 19, 2021 at 0:10)
@cashew: I still haven't quite recovered from Pastrana's onboard up Pike's Peak. The steering corrections he's making at those speeds on those cliff edges. Makes proximity flying look like a leisurely stroll in the park.

rcrdrvr (Nov 19, 2021 at 0:50)
@ConnorM21: Thought I was about to read a spoiler just now and freaked out, then realized the rally is this weekend. Kinda hoping for Evans to be honest, cheers.

daweil (Nov 19, 2021 at 1:47)
@rcrdrvr: doesn't the sti have around 300hp bone stock? I really have no idea about rally but do they actually reduce power for some classes?

ConnorM21 (Nov 19, 2021 at 4:23)
@rcrdrvr: Gonna be a good weekend what ever happens! got Lewis in F1 as well this weekend, be awesome too see both get #8 championship and become the GOAT's in there respective disciplines!

DelaneyMTB (Nov 19, 2021 at 5:16)
@rcrdrvr: Yup, rooting for Elfyn this weekend too but so far, Seb looks like he has it in the bag. I had the privalege of witnessing these cars in person in Finland this year. Words can't describe.

RadBartTaylor (Nov 18, 2021 at 10:36)
I still can't wrap my head around driving a car at these speeds and processing the co-driver comments....right maybe, twisty 360, absolute left...I enjoy watching the in-car videos and trying to listen to co-driver and trying to understand how the driver is reacting to it...but I'm always a step behind, I have the luxury of sitting in my living not having to double clutch, rev match, shift and not kill myself....

Planetx888 (Nov 18, 2021 at 11:49)
Honestly, the more befuddling thing to me is the codriver being able to casually read off pace notes and not get lost on the page while airing into corners at 70 mph. I would be horrified of getting to the bottom of a page and having to take 2 seconds to flip the sheet of paper.

I think I would mostly just be sitting there screaming, and likely pooping (a little bit).

RadBartTaylor (Nov 18, 2021 at 12:02)
@Planetx888: Yeah, I'd imagine if you lose your place your are totally screwed....you wouldn't know where to start again. Coming from somebody who gets carsick anytime I try reading something, it adds another layer to how far from reality it would ever be for me...

scott-townes (Nov 18, 2021 at 11:08)
@loamyhomie: Absolutely but the top guys have decades more experience. I'd argue that Pastrana has way more talent in terms of adapting to other sports and with years of rally racing experience, he's still not on their level.

nickgarrison (Nov 18, 2021 at 13:11)
@RadBartTaylor: Pastrana won the overall in Rally America 4 years in a row. Ken Block raced in WRC for a bit and did not do well. He also finished behind Pastrana in Rally America.

RadBartTaylor (Nov 18, 2021 at 13:53)
@nickgarrison: Apparently he did race some P-WRC stuff....I may be remembering some comments he made a while ago about wanting to race WRC but not having the chops for it...

plyawn (Nov 18, 2021 at 16:34)
Remember when RAW meant a couple of camera shots with no post production? Now it's drone footage, multiple angles, super-edited audio, post-production correction and effects... but no music, I guess? RAW!!!


and for those who have an interest in cars going fast on segments, check this out, and make sure to pay close attention to the bits where the camera is pointed at the driver's feet. (Ari Vatanen)

OzzyPhil (Nov 18, 2021 at 14:03)
Why did he edit the hell out of the sound to make that boxxer turbo engine sound like a wet fart?
Real life, red-lining with anti-lag etc they sound way more viscous & nasty than this!
Major let-down!

cwatt (Nov 19, 2021 at 8:37)
See kids, all you need to do is start in one sport to gain the largest sponsor in alternative sports and then pivot to another sport with their huge financial background and you can win races!

SurfNC (Nov 20, 2021 at 7:16)
I always wanted to be a rally racer, since I was little. Now, at almost 50 yo, I'm glad I had mtb for a good portion of my life. Railing singletrack fast is the closest i will ever come to racing a rally car (I've had fun on my Subaru on fire roads but never raced rally). And that's ok with me!

Phipu (Nov 18, 2021 at 11:54)
I really like rally. But u would really like to know how guys like Brandon, Pastrana etc. would do in the WRC field. Ken Block didn't really have much of a chance there...

rcrdrvr (Nov 19, 2021 at 1:09)
Uhm, just beating other people in live racing is enough for some, let alone competitively. I think none of them really have a chance at the top level, maybe WRC2, maybe.

GT-CORRADO (Nov 18, 2021 at 21:54)
Woops! The vid with the camera pointing @ the drivers fancy footwork is in a Group B Audi vid with Walter Rohrl & Michelle Mouton

Ancilotti (Nov 19, 2021 at 0:14)
This was extraodinarily boring. I don’t see the point - just because it’s Brandon it’s supposed to be cool? His bike videos are on another planet, but this car-s’iding left and right turn jump video show nothing special that any other rally fricer could not do…. But I think any content that creates clicks is post-worthy….

bmccrady (Nov 18, 2021 at 16:48)
Damnnn you cant hesistate or flinch for a second when your doing something like that...no nerves

glennyeltee (Nov 18, 2021 at 21:01)
How do they anticipate/deal with wildlife crossings? Could imagine that going horribly

gibbon-on-an-orange (Nov 19, 2021 at 3:10)
They can't, and it does.
In a real rally they send a couple of course cars along the stage at increasing speeds to ensure the stage is clear and hopefully that's enough to a: clear spectators from the road and I guess scare any deer etc away before releasing the competition cars, but once the stage goes live, deer can do what they like.

Ba1rog (Nov 19, 2021 at 13:46)
Yep Vouilloz was pretty good and his division was probably more challenging than the American WRC thing. BTW the WRX is way too big to fit in Europe.

anaughtymouse (Nov 18, 2021 at 9:43)
pretty smooth, but he's still got a thing or two to learn from the real pros www.youtube.com/watch?v=0BTrEt6scwQ

thenotoriousmic (Nov 18, 2021 at 10:48)
@RadBartTaylor: That absolutely brilliant. Have you seen the motorbike tt racers?

RadBartTaylor (Nov 18, 2021 at 11:08)
@thenotoriousmic: the Isle of Man stuff? Craziest thing I have ever seen.....bucket list to see that in person at some point. I can't get enough of that British dude who has the craziest accent...

anaughtymouse (Nov 18, 2021 at 12:38)
@chriss78: sorry, I thought the sarcasm was more obvious and assumed the whole "Samir, you're breaking the car" thing was more popular than it apparently is. Or my humor has just degraded today...

bananowy (Nov 19, 2021 at 1:45)
@anaughtymouse: Nah, you're good man. Pinkers have a stick up their collective arse and wouldn't see sarcasm if it smacked them in the face.

Samir is a legend and a hero and I can't believe anyone here doesn't know him. I hope he's still out there breaking cars and not letting anyone tell him how to drive.

[edit] That being said, could have been better to post the short and condensed version for people to get the joke: www.youtube.com/watch?v=D9-voINFkCg

Can't we just enjoy someone succeeding at something they love without the need to put them down?

thenotoriousmic (Nov 18, 2021 at 10:44)
Who cares? He absolutely railed those turns and made dirt go everywhere now all the girls fancy him, me included. You’ve got to admit this is better than another ebike promo video?

jimoxbox (Nov 19, 2021 at 8:13)
@all-knowen: whatever dude it’s just a pinkbike comments section . My opinion is he would be uncompetitive against the best world rally championship drivers .

NERyder (Nov 18, 2021 at 11:11)
Question: Would a drone be able to keep up with those speeds and turns while also staying on target with video?

willdavidson9595 (Nov 18, 2021 at 21:11) (Below Threshold)
@giantwhip: Man chill, you're from Canada. In America we are actually suffering the consequences of Joe Biden's crappy leadership.

Is Man even your preferred pronoun?